Water. No wait, trees. Actually, it’s light shining through water on the ground and trees are on the walls. I sit as an island in this multilayered sea of light: I don’t have the comfort of anonymity that being an audience member often provides. This is thrilling, not only for the unfamiliar sensations it is giving me, but also because I can see the others in the room – their faces searching this new architecture of viewing.

We sit in spread out rows, facing every direction. Sometimes the rows are continuous and at others the pattern shifts. Sounds of a foghorn. I feel dreamy, floating in a crowd that is neither completely connected nor completely separate. The performance has not technically started, but an altered state of being has already begun to play upon me. 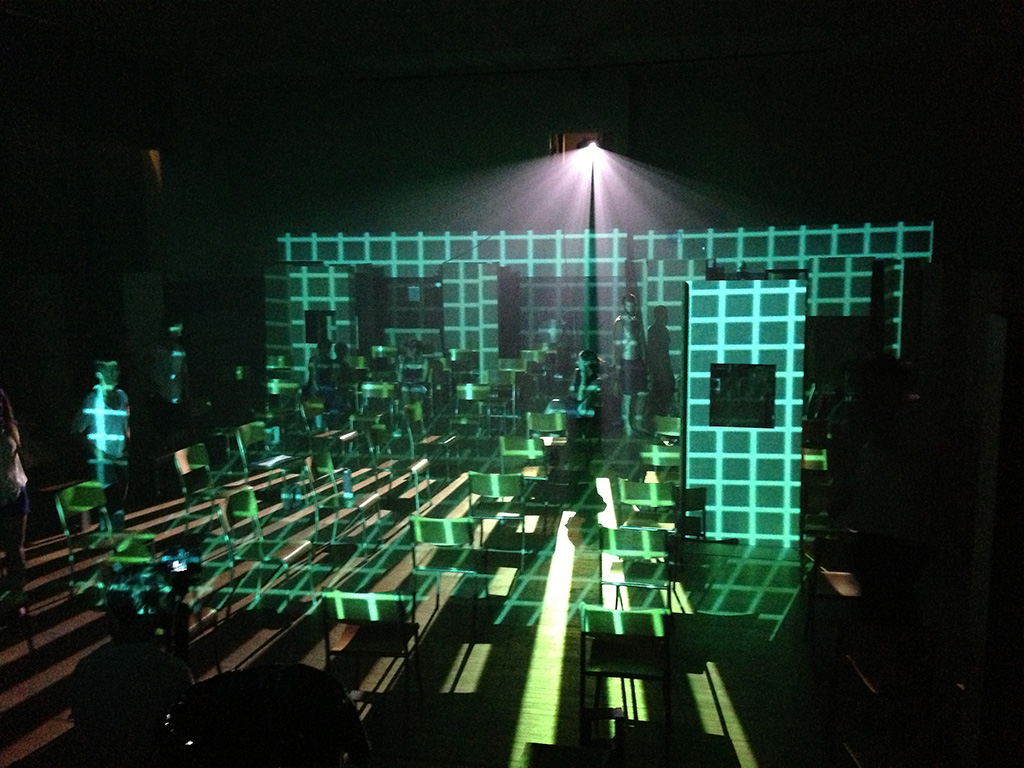 It begins. Large cardboard partitions weighted by concrete blocks are moved around the space. We become encapsulated, imprisoned by the partitions, the walls create new spaces. They surround the perimeter of the area and dictate how the light shines through to the action and upon us. Sometimes it hits the faces of audience members. I feel slightly antsy, as though some latent part of my animal nature is triggering flight response. I should want to get out, to make sure I can get out of the box that the performers are drawing around us.

Someone speaks. It’s a story about ancestors. The story creates an image of an archetype of an ideal society, as though it exists now. This model society is true democracy. Questions arise: what are the politics of space and how have they been contested by people living in the past, people whose presence only lives through the structures that mediate our daily lives and the ways that we relate to one another?

The partitions are moved by the people. They change what we see and how we see it. We are close to people telling their stories and sometimes we are far, and cannot see. The light is obstructed and freed inconsistently. Are we blocking the light from coming through by moving more and more walls around our discourse? 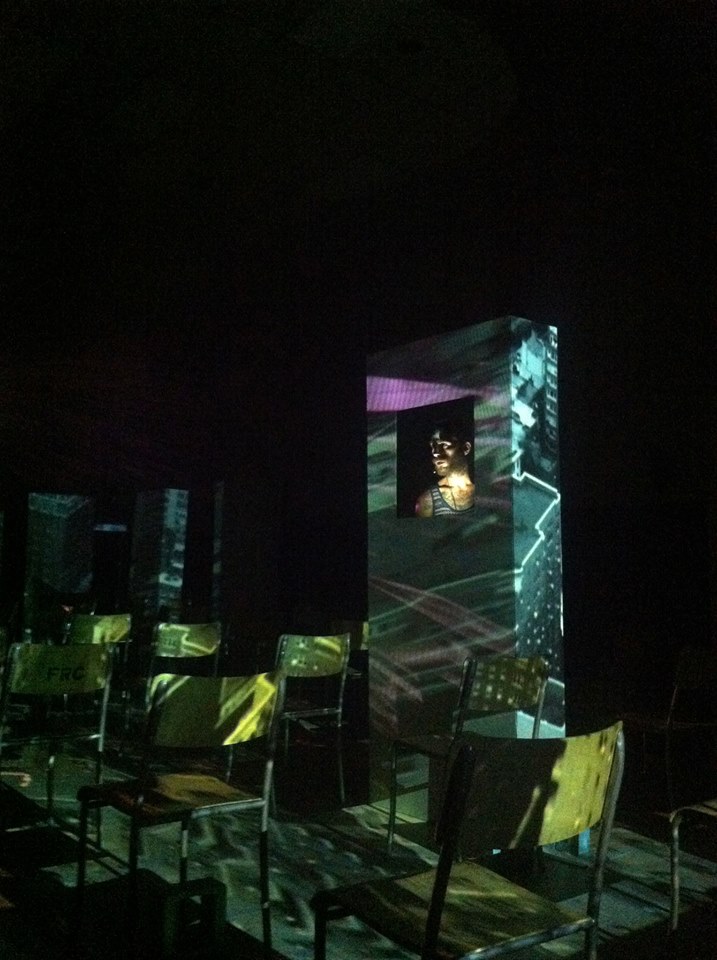 A wall with a window is directly to my left and directly to my right a performer stands as though framed by this window. She reluctantly disrobes. I know that people look towards her. I feel in the way and at the same time too close to turn my head to look. I see the action unfold out of proximity rather than through the assertiveness of the gaze. It is a new way of experiencing the story.

A performer describes the way their childhood home is like, as though remembering it through the present mind, as though they are walking through it now. Another talks with their partner on the phone in public, quietly so as to stay somewhat private. This loses any true expression that may exist without the presence of strangers.

Someone speaks on the phone in Arabic, pacing, touching her hair, repeating the phrase, going from arguing and upset to pacified and soft.

A mother and son/daughter argue. She is at once condescending and absolutely soft and loving. It’s manipulative.

A woman is in the men’s bathroom and a man walks in; she says it’s ok. He cannot pee. He says she reminds him of someone, she leaves, he pees, then looks at the mirror where she was putting on her lipstick and touches his lips and chin.

There are sounds to animate the action and bring it into the present and out of anecdote. And yet the dreaminess is maintained, allowing us to accept the humanity inside the violence. 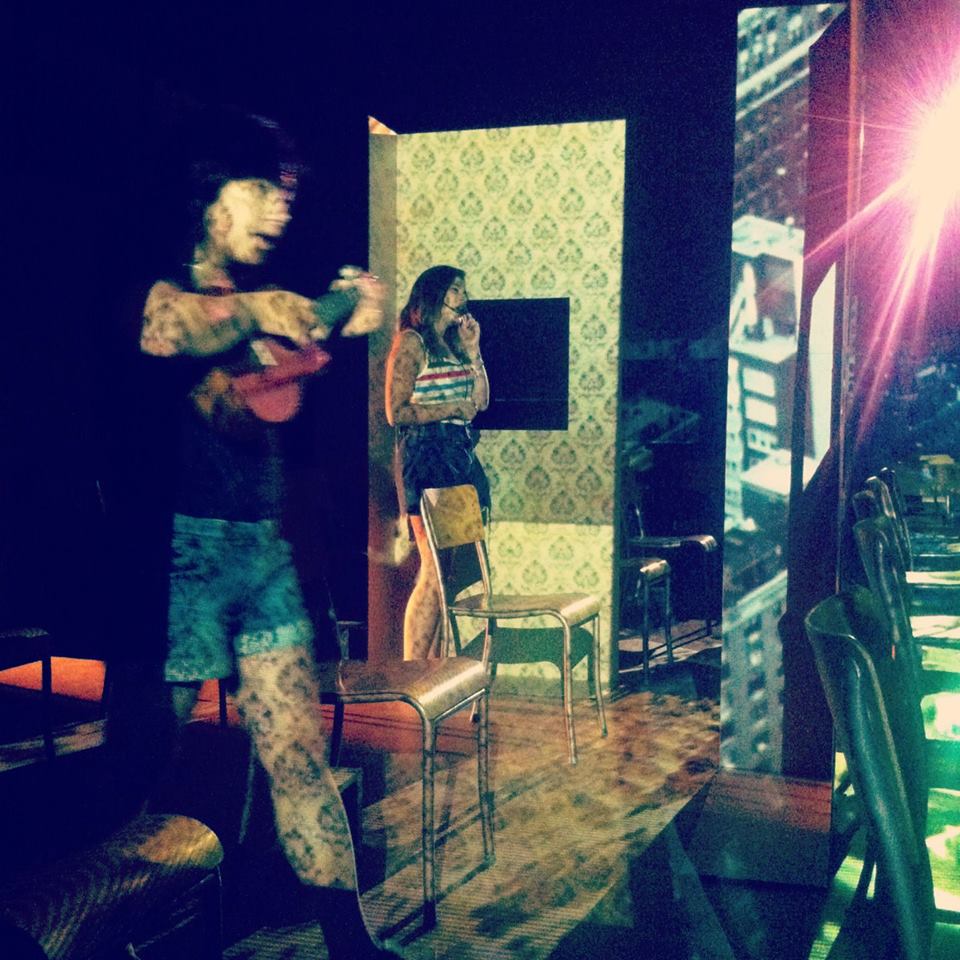 Slow motion bottle throwing and shock from the crash. Another joins, they all join and a beat throws them into frenzied motion into the light, they raise a hand into the light as if to flag the ship that the foghorn called for. What are we flagging for? Is it worth it to put our hands out to be seen within the fogs?

We can see people in the space. The few, the performers, are sometimes seen more than the audience, and the many, the audience, are sometimes seen more than the few. The story at the beginning tells us of those that built this space, this society. What lives in the architecture of space and the psychology of how we create boundaries around ourselves? How many of these have we created ourselves? What is the past but a structure within which we gage our present, a structure that we constantly have to place in our present minds and find resolution within? Is resolution forgiveness?

The partitions create pathways of light, and illuminate different events each time they are moved. When we look through a structure towards ourselves or another, how does the way that it frames us alter the way we behave and see the events that are taking place? It feels like the city is the psyche, encompassing rooms in our minds that take us around time in seemingly disparate though intrinsically connected ways. Through the process of creating the whole, we link pathways together. The mundane and the transcendent live together, engaged with memory and are activated by the triggers of physical space.

At the outset, we are told that we are a democracy because we are governed by all. Is this an ideal that can be seen through the violence that we are taught is needed to create it? The storyteller said that it has been created by those who had to live in war and conflict. These violences live through how the structures change and alter the way that we move through contested spaces, personal and domestic, political and global. 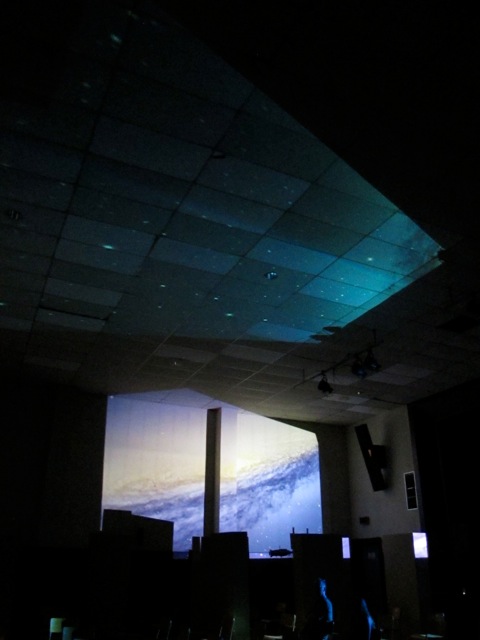 At the end, a woman looks at an audience member and says that she forgives (her) for leaving her outside naked, telling her she can’t wear anything she hasn’t bought and she hasn’t bought anything. This begins a tessellation of proclamations of forgiveness. We are left with a sense of yielding to the softness of humanity and the sacred transcendence that can emerge out of everyday conflict.

The movement of light and use of space is intelligent and subtle and invites me into discomfort. Performances, devised by the actors and directed by Leaky Heaven director Steven Hill, embody a strong fragility that feels on the cusp of every emotion at once. This gives me more than one doorway into connecting to the work. Rather than drawing my attention to the nature of the performance, the strength of the performers allows me to enter into the space with them, allowing me to live in the reality and surreality of what they were creating.

I miss dialogue and action in the play because there is more than one thing going on at once. I let this go, as my ears and eyes cannot take everything in and I don’t think I am meant to. We miss these subtle moments of beauty and violence often, but are absorbing them through some sort of spiritual osmosis with space, memory, architecture and negotiating relationships within these spheres.

der Wink forged embodied highways between the architecture of the psyche and soft expansiveness of the heart. It directed these roads through the politics of space, history and relationships in urbanity, and was solidified in a boulevard intersection where the revolution of forgiveness lives.