Peter Bingham, the Artistic Director of EDAM Dance, has been an early and forceful exponent of improvisational dance, and Contact Improvisation (CI), specifically; so it was, perhaps, no surprise that the six-day run of inside the lines | the lines inside would centre on improvisational work. The three pieces – one by Mr. Bingham and one each by guest artists Deanna Peters and Rob Kitsos – combined to create a referendum-of-sorts on the relative merits of rigorously choreographed dance versus a freer, more spontaneous interpretive expression. 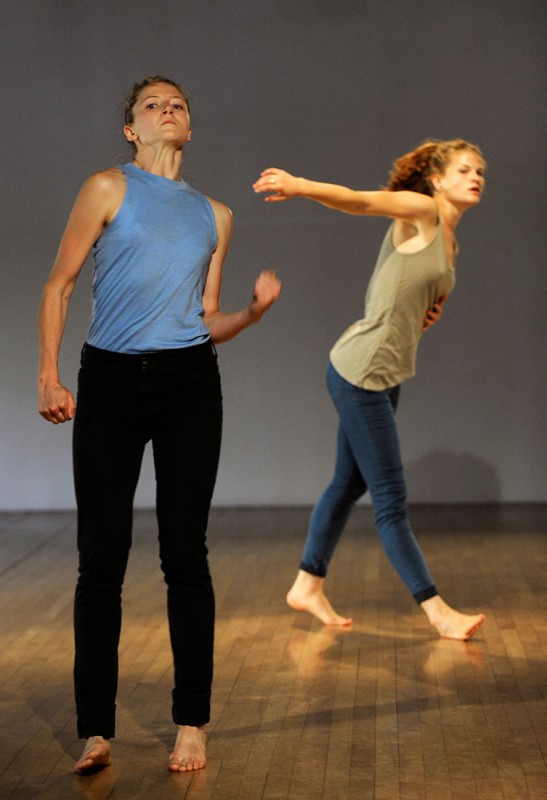 If these two poles of dance structure were both represented in the kinaesthetic debate, it was hardly an even tussle. There could be little doubt where these three choreographers come-down. The program was not simply a showcase for the beauty and potential of improvisational dance; at points, it seemed to be a glove across the face of meticulously mapped-out choreography.

If inside the lines | the lines inside was, indeed, a face-off – or at least a conversation – between a more conventional and a less-structured mode of dance performance, the audience couldn’t have been more favourably disposed to the creative ideology being advocated. The 65-seat theatre was filled to capacity and displayed a distinctly young, hip, Eastside vibe. Less than a dozen people in the crowd were over age 40 and most, if not all, of the older audience seemed knowledgeable about the technical methods and visual vocabulary of CI and quite familiar with Mr. Bingham, his work, and his dancers.

The program begins with a new piece by Mr. Bingham called “Reinventing the Curve”, a duet performed by Monica Strehlke and Farley Johansson. The piece begins smartly, promisingly, with an opening sequence that seems to define the evening’s overarching theme, proposing a creative tension between plan and impulse. The lights come up with Ms. Strehlke reaching for Mr. Johansson, blindly feeling for him as he evades her touch while whispering her name in beckoning. But his entreaties are not a tease; the dancers convey the powerful craving for touch, the deep need to connect in order to catalyze their creative process. It is not Mr. Johansson’s reticence that is frustrating their union; it is choreography itself. In the end, their hands touch and their bodies adjoin. But only briefly, before the seek-and-miss begins again in reverse, with Mr. Johansson playing blind man’s bluff, exploring the bare, stark studio in search of the human contact that will launch the improvisational work.

From that point, longer segments of CI are interlaced with shorter sections of tight choreography. While the contact improvisation was danced with seemingly effortless fluidity and considerable imagination, and generally conveyed the sense of intimacy that marks the best of these performances, it lacked any obvious coherence, either thematically or aesthetically, beyond the usual ebb and flow. It is not difficult to see that the spontaneous reactivity and dialogical quality of CI make it both fun to dance and expressively interesting for the performers – particularly for those as skilled as Ms. Strehlke and Mr. Johansson. One has to ask, though: why was an audience invited to observe this? While the hypnotic flow and occasional pyrotechnics of CI make it watchable at first impression or in small doses, it is hard to see how the seemingly uncharted whirl contributes to a meaningful dance composition or conveys much of anything to an audience. The dancers fuse into each other by means of direct, tactile communication, but all communication with the audience is lost in the ironic solipsism of the pas de deux. Mr. Bingham clearly proselytizes improvisation; and yet, the case he made was hardly convincing.

Deanna Peters’s frequently impressive piece follows. Titled “NEW RAW,” the dance purports to “side-step the clichés of female identity in order to reveal our individual rhythms, desires, habits, and dreams.” It may or may not do some or all of that. What it certainly achieves are two, very striking things. First, it presents the female form in a beautiful and unexpected way, as Ms. Peters implodes the aesthetic opposition of sinew and voluptuousness in an imaginative opening sequence which is the highlight of the evening – and which is captured in vignette by the signature photograph for the inside the lines | the lines inside program. She should have asked Mr. Bingham if he would be willing to swap titles with her, since nothing could better characterize her accomplishments, both as a choreographer and a dancer in “NEW RAW,” than “Reimagining the Curve.” 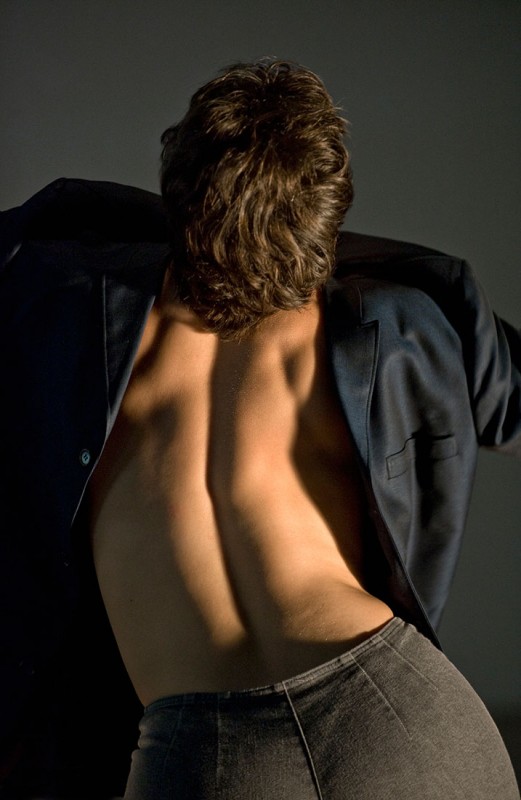 Ms. Peters’s second success is to take up the tension between rigid choreography and improvisation in a very clever way. Her strategy is deliberately, deliciously inelegant: she launches a viciously witty lampoon of traditional choreography. Dancers Alexa Mardon and Molly McDermott re-imagine traditional dance creation as an exploitative, sadistic relationship between the autocratic choreographer and the zombiesque corps-de-ballet member in a pas de deux that is cruel and manipulative. Ms. Mardon is able to bend and prod Ms. McDermott to produce conventional forms, but the resulting gestures are devoid of significance and inherently lacking in aesthetic depth.

The stubborn, insistent presence of improvisation was embodied in the alarming visage of dancer Elissa Hanson, performing an absurd, butohesque solo of no discernible meaning, in the piece’s eye-popping third section. Ms. Peters creates funny tension at the close of this segment, when Ms. Hanson’s turn is apparently finished and it is time for her to exit the stage so that the other three dancers can get on with the show in a more synchronized, coordinated fashion. And yet, Ms. Hanson lingers at the exit doors, reluctant to depart the stage, still engaging the audience as the other dancers look-on impatiently. Ms. Peters plays mean, but she also plays fair. If formulaic dance-creation was mocked in part two, improvisation is made to look foolish, self-indulgent, and overbearing in part three. 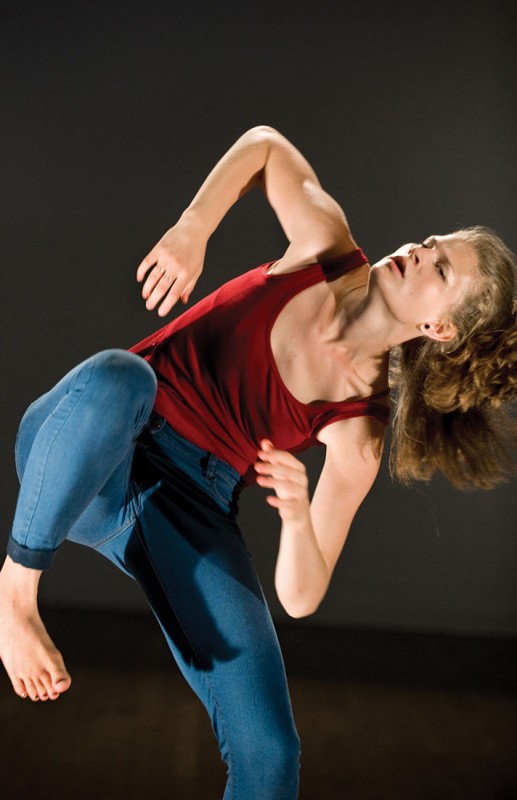 The concluding segment of the piece is something of a Rorschach test for the audience on the relative strengths and weaknesses of improvisational dance. The four dancers are queued and moving in their own, distinct dance-lanes to their own, distinct improvisations. Each time through their line, the dancer’s movements transform, perhaps to elucidate the stated theme regarding female identity; who knows. But the evolution of each dancer’s individual movements bear little or no relationship to those occurring in the lanes beside them. One enthusiastic audience member described this as “four outstanding, completely separate dances.” A thoroughly unimpressed observer might offer exactly the same description.

In many ways, the final piece by Rob Kitsos has the least visual appeal of the three dances presented in the inside the lines | the lines inside program. The choreography and improvisational movement is far less sophisticated and the ensemble dance performances far less accomplished than those of “Re-Inventing the Curve” or “NEW RAW.” And yet Mr. Kitsos’s piece is in some ways the most interesting, innovative, and successful of the three. This work is concerned with creative process; the subject matter and balletic form on which that process operates are secondary, even trivial considerations.

The program notes call “Con-Found” “an experiment in real-time composition.” The process began back when the piece was first in development, with the dancers/actors jointly creating simple patterns of movement intended to express ideas based on the mundane experience of losing things, along with the attendant frustrations and confusions. This becomes the library of dance movement from which the dancers/actors cull the actual performance.

The sequence in which these patterns are stitched together is determined in the moment, as the piece is in the process of performance, based on their sense of pre-determined structural and thematic imperatives Mr. Kitsos had established for them. The ensemble – Robert Azevedo, Aryo Khakpour, Jessie Kwan, Felicia Lau, Alex Mah, Sean Marshall Jr., Kim Stevenson, and Conor Wylie – prove themselves well up to the creative task. They have generated a variety of performance elements that are in turns narrative and representational, or abstract and evocative; and they sequence them during the performance in a way that feels coherent, if not exactly seamless.

At one point in the piece, one of the dancers/actors augments the discursive movement with an oral narrative concerning the loss of a wallet from the pocket of loosely fitting jeans while on a roller coaster. The story is no more fascinating, no less banal, than the representational storytelling of the improvised dance; but things become remarkable when it is subjected to retelling. It alters, if only in small ways. Points of emphasis shift and dramatic stylization varies. Each retelling describes the same events in the same sequence in essentially the same way; and yet the mutations are easy for the ear to discern. By putting this simple text through the same process as the dance movements, the audience is given a cipher through which to better appreciate the improvisational structure of the piece as a whole.

Perhaps the lesson of inside the lines | the lines inside is not that detailed choreography and improvisational movement exist as opposites, but that they are complementary. As in jazz, strong compositional elements and organizing principles allow improvisational free-play to broaden the expressive possibilities of a dance piece. Without enunciation of a clear, overarching theme or unifying aesthetic, however, improvisation has inherent challenges in conveying narrative or ideology with coherence – particularly as multiple performances accumulate within a single presentation. The three dances of this interesting program both analyzed and illustrated these principles.