Child-like wonder on a directionless path

Words by Kaylin Metchie
Photo by Mind of a Snail 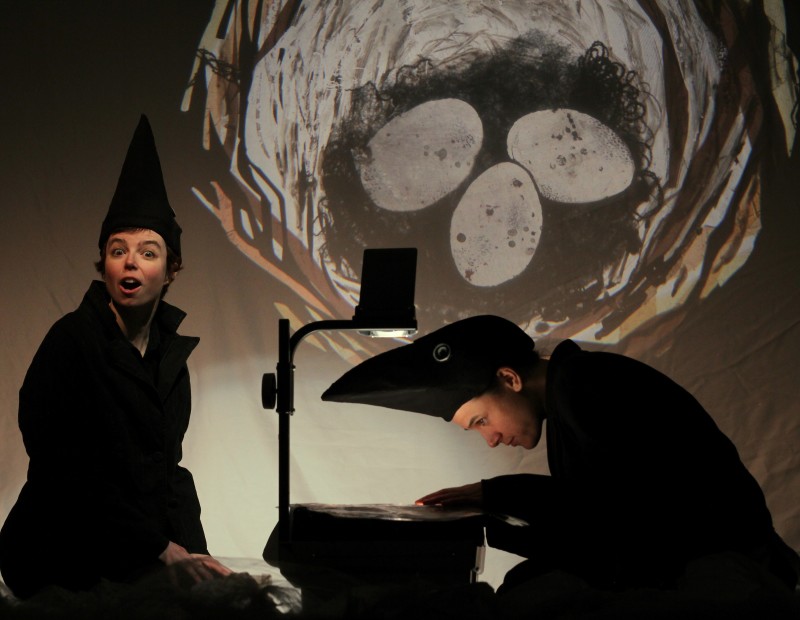 We in the theatre community often talk about the slow death of our art. How audience sizes are dwindling, being chipped away by the more easily accessible art media like TV/movies/internet streaming. Often the faces in the seats of one production are eerily familiar to the faces in the chairs of the last one you saw. Yet this was different. The audience composition of Mind of a Snail’s Caws and Effect ranged from the very tiny novice to the seasoned theatre watcher.

From the beginning scene, when the first human-crow flaps its wings onto the stage, everyone in the cold Cultch Historic Theatre was drawn into Mind of a Snail’s punny and highly visual world. Adults and children laughed together as one crow forcefully and with much conviction laid an egg. Throughout the performance, in fact, I’d say the adults chuckled a little harder, being able to grasp the bird-based puns with a little more speed and enjoyment.

The visual presentation is what makes Mind of a Snail so captivating. The young and old cooed over the bright colours and silly jokes. Their uses of light and colour, the interplay of sound and visuals and, the creativity of their puppets should be enough to encourage anyone, young to old, to see their shows. I found myself equally shifting my gaze between the projections and Chloe Ziner & Jessica Gabriel, trying to figure out how they were able to manipulate the bird puppets with one hand while simultaneously maneuvering the background images in seamless storytelling. It was truly like watching a video being edited live, with characters entering and exiting the frame, and backgrounds distorting and moving to show a journey. Such amazing visual beauty was achieved with just two old-school projectors and many MANY pieces of clear and coloured plastic sheets.

You can tell that Ziner & Gabriel are masters of their visual medium. However, there was one aspect of Caws and Effect that lacked. The story was amusing and engaging in a sense, but it felt directionless, as though so many ideas were stuffed into their 55 minute set that no concept or narrative was able to catch hold. Was it a fantastical journey about being careful what you wish for? Was it a comment on the treatment of our environment? Was it to show the unfairness of life and death? The unfocused narrative arc made this 55-minute production feel like it dragged on just a little too long.

All in all, Caws and Effect is a show worth seeing, as would be any Mind of a Snail productions. The beauty of the visuals and the proficiency with which they mix light, shadow and music is a recipe for a thoroughly entertaining evening.

One Response to Child-like wonder on a directionless path

In The Media Tent