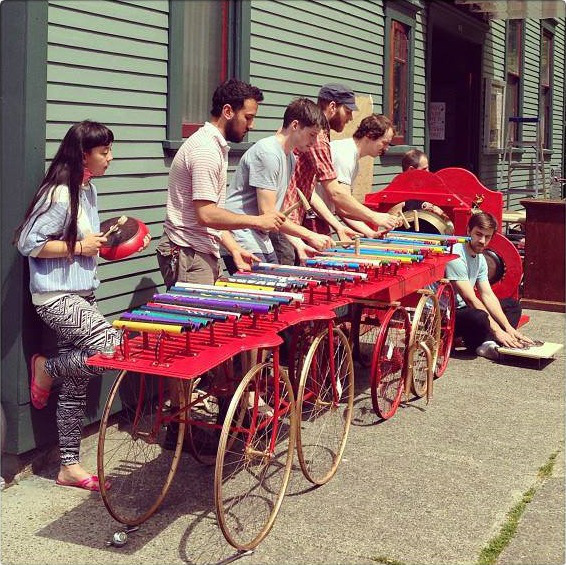 I meet Rahi and Jacob in their East Vancouver studio, but I get turned around trying to find it. I ask a woman for directions. She is talking to herself and petting a cat on a leash in content melancholy—her tiny feet dancing beneath her to a song that exists only in her head. I wish I could hear it with her as I approach Publik Studio, dodging a boy with a water gun out front. I watch a water gun spray drip down the ambiguously labeled door before Jacob’s smiling face appears to welcome me inside.

Jacob’s takes me through the space where she teaches piano, improvisation and music theory. Detailed and colourful zines hang from the walls strung with a playful lightness like clothes hanging outside on a line. In the larger section of the studio is Rahi sitting cross-legged on the ground working on a project. Near him is the projector and delicate microfiche adorned in images that invoke Vancouver’s historical social and physical geography, which will be incorporated into the shadow play and Gamelan Bike Bike performance July 7th.

Gamelan Bike Bike finds its musical inspiration from Bali and its raw construction materials from the scrap metal bins of Vancouver. “There is definitely a very widespread culture around this kind of project in terms of junkyard bands—in terms of celebrating reuse and doing new things with old materials,” says Rahi.

Two of their newest Gamelan instruments are sitting in the space. They are a colorful array of bike tubes layered beside each other; it’s compelling how the reuse of vintage bike frames can sound as beautiful as a set of traditional Gamelan instruments. The reuse and recycle resulting from collaboration with the cycling community is what gives these inventive musical structures a quality that is uniquely Vancouver. Jacob starts playing these new instruments for me; both were constructed this spring and are the result of hard work and experimentation with steel materials. She points out the how bike parts are incorporated into the structure of the steel bar instrument.

“These are steel flat-bars. So now you can see that we have moved towards functionality a bit more,” explains Jacob as she playfully strikes the bars in front of Rahi and I. I can tell she had been waiting to show me since I had walked in. They fill the entire room with a deep, intoxicating, full sound that slightly lingers through the space and spills out through the windows out into the street. “The bike tubes still sound awesome, but we can’t get tubes to sound low enough. The strata of melody in Gamelan is very important, it is very layered.”

Publik Secrets has creatively taken theoretical musings on transportation and Western industrialized society, merging them into a whimsical shadow play. The medium references traditional Indonesian arts practices, which in the performance, fuzes with the layered sounds of Gamelan Bike Bike’s instruments, comprised of repurposed bike parts from local community bike organizations throughout Vancouver.

“We have definitely been inspired by Mind of a Snail’s shadow puppetry here in Vancouver—their approach that they call Compost-modern,” says Rahi, “It’s very layered. When they say, ‘compost-modern’ it’s very much using the left overs or the discarded materials of our city for the raw materials for their work.”

The theoretical musings inspiring the original shadow play comes from the Austrian philosopher and Roman Catholic priest Ivan Illich, which for Rahi, “has this way of succinctly summarizing this very humongous perspective on trends or issues. When you read his essays he has a very reasonable approach to account of all the ambivalence or contradictory things we count as progress, and breaks those down into thinking about the social costs of our standards of living or our enjoyment of the cities, enjoyment of the space we share together here.”

Jacob continues, “Illich talks a lot about mobility and transportation, but also about schooling. And as a teacher, for me, he’s one of the figureheads of the DeSchooling movement. Our interests and ideas are diverse as an ensemble and his works combine our varying perspectives on different issues all into one person’s ideas and writing.”

During the interview Jacob and Rahi also briefly touch on the social context behind the site-specificity of the performance taking place in Mt. Pleasant, and the incorporation of imagery from Vancouver’s older history of Publik Secrets’ shadow play.

“A lot of our performance is centred around Main Street. I think we’re presenting a longer arch of Vancouver and how all the historical changes that have happened over time are influencing Mt. Pleasant’s development now,” says Rahi. “we’re also tying in some scenes around the conflicts between low-rise and high-rise.”

The first performance in the series was a collaborative performance by we just stole a car and Gamelan Si Pawit on June 12th. New Bronze Age Series has inspired great conversations between the ensembles who have performed, especially between Gamelan Bike Bike and we just stole a car. I think we can expect to see  future projects to come out of New Bronze Age that challenge how we view contemporary West Coast Gamelan.

“I wish we could have all played the same show! We talked with we just stole a car about doing a concert format that is popular in Bali called mebarung,” says Jacob, “It would be really cool to do that kind of show and maybe even write music for each other.”

“We’re excited about the Western Front supporting us,” adds Rahi, “in terms of recognizing a newer Gamelan ensemble that’s making original work. And on their part, for creatively producing free shows in a public space. It’s really special to find an organization that supports artists in public spaces, where the bar is very low for participation. Just come by, check out the show, and hang out.”