A Reflection on the opening night of LOOMINGS; or THE WHALE 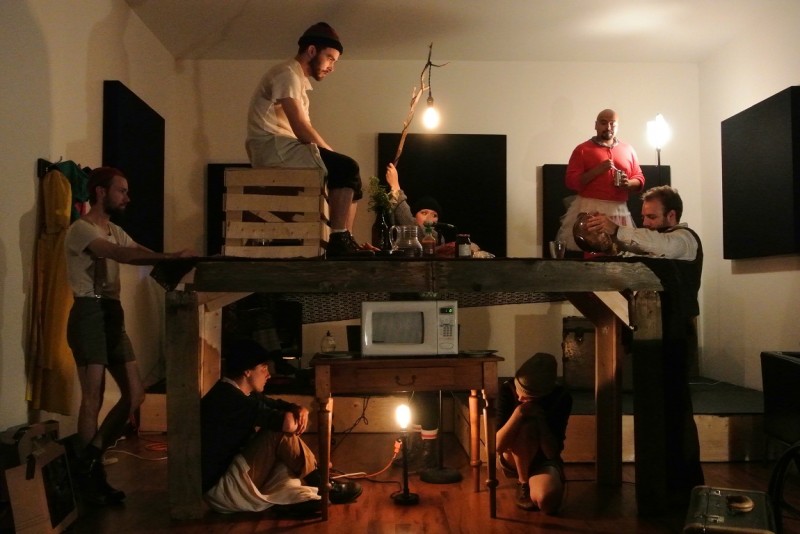 Pandora’s Box Studios – a rehearsal studio with top of the line acoustic engineering and soundproofing in each of their 18 rooms – is nestled on a rather beige, unassuming corner of Pandora Street and Victoria Drive. I arrive a little too early for the show, and find myself waiting in the lobby with rice & beans theatre co-artistic directors Derek Chan and Pedro Chamale, who are counting the box office float and pasting up posters for their show, LOOMINGS; or, THE WHALE. On the coffee table in front of me are rock and roll themed magazines, and beyond the coffee table is a foosball table. Tattooed musicians walk through the lobby to greet their bands in their individual rehearsal rooms. Every time a door opens I hear whaling rock music. (Had to do it.)

LOOMINGS takes place in a rehearsal studio transformed into a tiny theatre, with only a few rows of raised seating looking down onto a ghastly scene. As I enter, an actor who is frantically typing away on a typewriter at a tiny makeshift wooden table glares at me. The room smells like lumber, and is filled with a looping and thickening soundscape of groans and clicks that musician Elliot Vaughan is performing live. The stage manager, Emily Neumann, sits in the corner of the stage under a tall lamp. The lighting designer, Rui Su, is eerily crouching behind a door surrounded by lights of various sizes and large home-made gel screens. 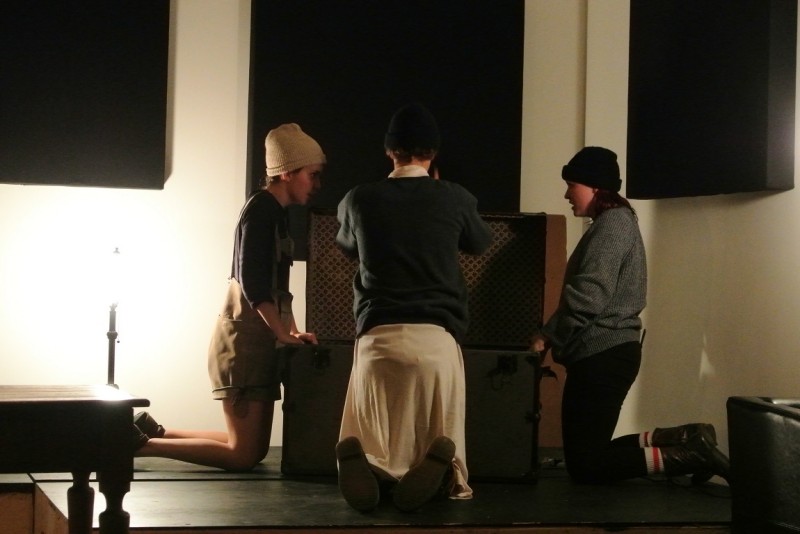 To my left is a long wooden table covered in props. It takes me at least two minutes of scanning the items (a microwave, blue plastic cups, some instant noodles…) to realize that hunched actors are peering at me from under the table. I’m being watched. And yet, despite the macabre sounds and distressed stares from the performers, I find the space warm and inviting (an unusual dichotomy that survives throughout the performance). The collection of lamps, colorful raincoats on the walls, and pieces of driftwood about the space remind me of ‘Grandma’s cottage’, and nothing says comfort like a warm bowl of noodles.

As pre-show passes, sounds are introduced into the loop and the space seems to become smaller and smaller. I’m being wrapped in a blanket of building sounds; an oozing gospel séance. Just before the noise begins to suffocate, I am pulled out of my trance by Rui Su (still crouching behind a door). After a nod from the stage manager, she puts on a thick pair of work gloves and pulls a large construction light towards her, pointing it towards centre stage. The show has only just begun, and I write in my note pad in big bold letters: COOL. 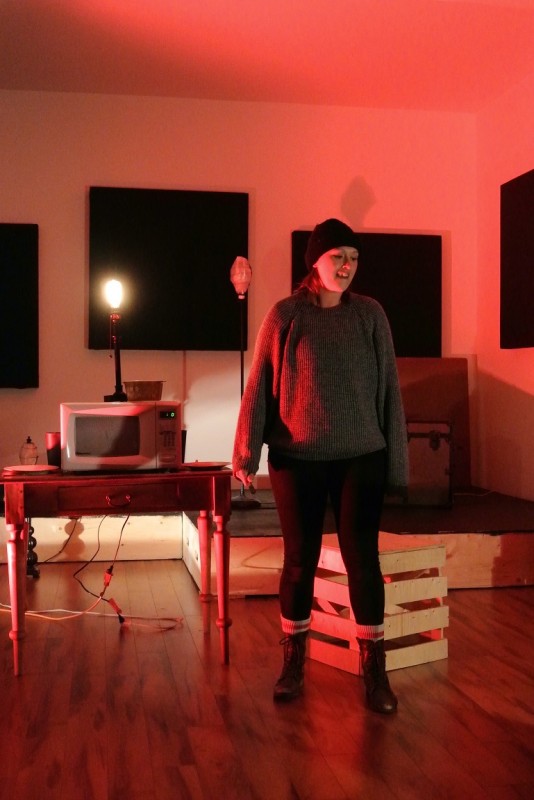 The door swings open and actor Pedro Chamale, wrapped in dozens of blankets and kerchiefs, wheels himself in on a wheelchair. He speaks very quietly to the man at the typewriter (played by Marc Castellini). Other performers begin to enter, all speaking text so softly that I am forced to lean in to try and listen. Their voices expand and the effect is like a cinematic fade-in. We are thrust into madness. An actor holds a large white sign above her head filled with text written in small black letters. Each character fights to be heard. The scene is exciting and overwhelming. I only hear snippets of phrases from each performer as single voices break through the crashing waves of sound until the cacophony transforms into a rendition of “Stand by Me” which eventually drifts away completely to return to the typing protagonist. Oh, and a monologist dog: “Call me Molly.”

Molly, (Chamale) wears a pink tutu and speaks in broken English. She informs us right away that Molly not real dog (phewf!). Molly is just actor playing dog. Molly is very loving and trusting of her master, and she is actually dead. Molly’s master – who may be the son of the typewriting protagonist (I could never quite figure that relationship out) – violently kills Molly one lovely sunny afternoon while they were at the park. Throughout the play, we return to snippets of Molly’s painful retelling of her murder, and this story functions as the eye of the storm, an anchor to ground the surrounding madness. 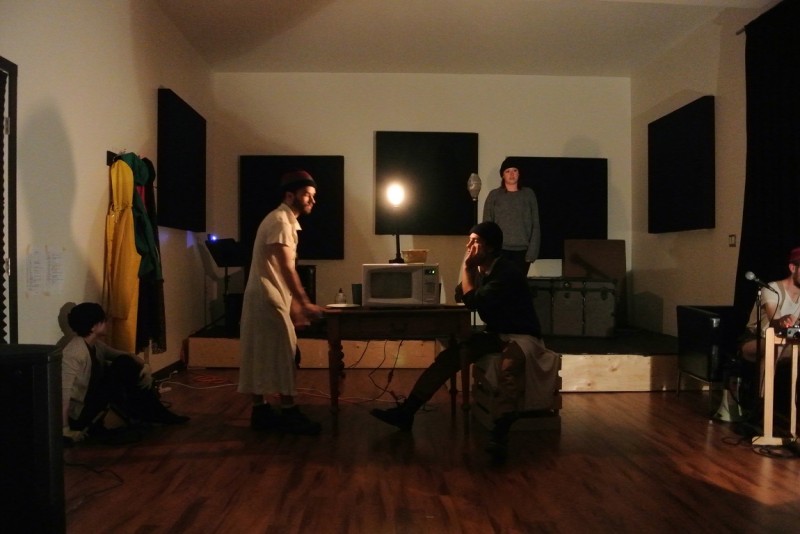 Circling Molly’s tale are discombobulating actions, images, and texts which, allegorically, use the form of a whale hunt to examine cycles of familial abuse and mental illness. Using a mix of verbatim text from Herman Melville’s Moby Dick, and original text written by director and playwright Derek Chan, the play describes the insanity of a hunt more than it describes a clear beginning, middle, and end of a particular whaling story. It returns time and time again to uncomfortable dialogue between a father and son.

The play moves rapidly (HOLD ON!). I have the feeling that I too am on their boat in the middle of a wild storm. At any point, two or three focal points are present. I’m often not sure of where I should be looking, or to whose story I should be listening. Text leaps back and forth between characters, leaving me unsure of whether the actors playing each role are interchangeable or if each specific character is having the same thoughts. Sometimes my ability to hear dialogue is dictated by the swinging of a microphone-stand-turned-boom-mic waved about by Vaughan.

Lines are repeated within different contexts; space and time are fluid, with the exception of the microwave oven, which is periodically set to count down in five-minute intervals. Vaughan records and plays back text from previous scenes to score the piece. Under many other circumstances, this type of frenetic dramaturgy and staging becomes frustrating to watch (especially when paired with themes of suffering), but the exceptional particularity of the choreography paired with the playful performances of the actors makes the opposite true. Despite the rabid violence, desperation, guilt, desire, and greed expressed so richly by each character, I feel giddy and child-like watching each moment swell to fruition and disappear into the mist. Near the end of the play a mannequin-puppet is erected from a large trunk. It takes three actors to transform the puppet into an unusual hammer-wielding blacksmith, and it is worth the effort. I never know what will happen next, but I know it’s going to be good. 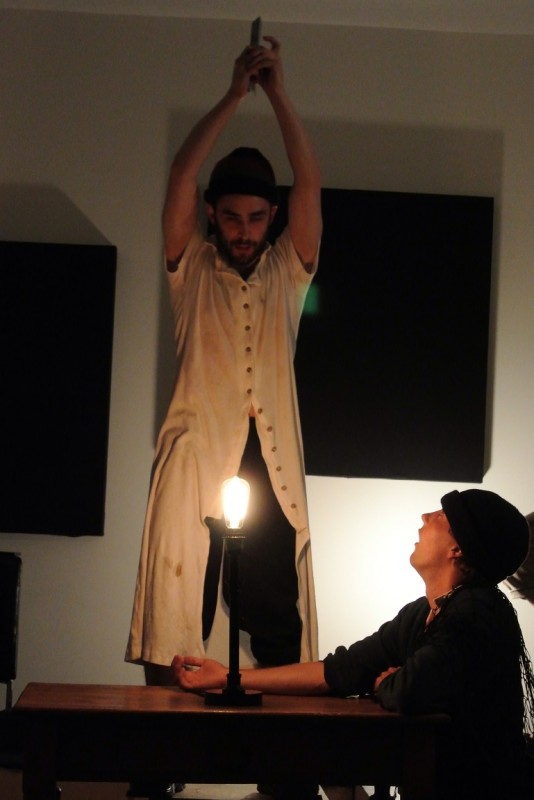 All that being said, moments of relief from the madness occur. A breathtaking image emerges as the actors become puppeteers of a life-sized whale skeleton constructed from pieces of driftwood (selected by props team Chu-Lynne Ng and Christian Vistan) and floats across the stage. A boat is beautifully constructed in front of our eyes by layering tables and stools on top of one another and hanging bare light bulbs off of the ends of branches. An eerie, fragile and genuinely touching moment between Molly and her “sick in the head” master (played by a wide-eyed, and wide-lederhosened Keely O’Brien) takes place as boarding announcements to Nantucket are made. The cast slurp spaghetti together on the boat as the microwave counts down from 30 to 1; a warped last supper for a very twisted family.

The play ends -and I mean this literally- with a pathetic orgasm that draws the hunt to its inevitable finale. 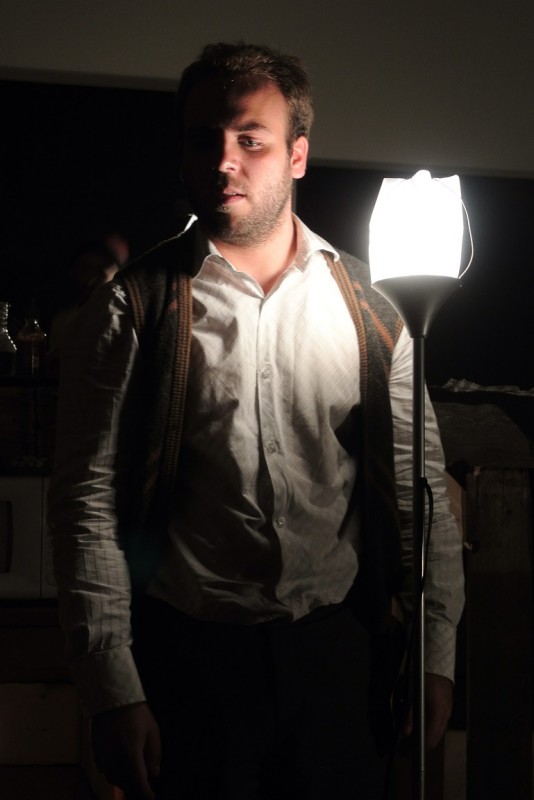 What impresses me most about LOOMINGS is its fearlessness in presenting such dark themes so playfully. Having seen previous work by the company, this show takes a huge steps forward. It maintains the obsessive layering and outlandish juxtaposition of violence and humor that I expect from Chan’s direction, but in this case, I never felt alienated by any of the choices. I felt welcomed and comfortable in the hostile universe of the play and mainly laughed my way through the performance. I do wonder what I missed of the play having not been able to follow so much of the text, but I liked the show so much I am planning on seeing it again next week. I hope to see you there.