I’m sitting outside City Centre Motel on Main. VACANCY is illuminated, and across the street, Hot Art Wet City is electrified by voyeurs. I’m drinking cider.

I see a woman wearing a uniform sauntering down the sidewalk, whirling her sweater – the sun is setting though, so I’m wearing mine.

The city below is slowly becoming speckled, the skyline riddled with cranes. Red sky at night, sailor’s delight. I walk and stop to view the industrial buildings to the left.

I enter the small anterior room of VIVO Media Arts, which is host to wooden enclosed benches, lamps (not wooden), chairs (wooden), and a collection of laptops, cables and (allotted into this frame sans oxford comma) pretty people.

Elisa Ferrari, VIVO’s Events & Exhibitions coordinator, is lowering a blind. I’m not sure what everyone else is doing, but there is mingling and beer glasses – they are rife with anticipation. There’s a bass noise emanating from floor speakers (I presume at first), causing the floor to grumble beneath the hooves of these people. Elisa is now accompanied by men, still pulling down the plastic window covering. She gives up and the one window remains a semi-closed eyelid while the others gape widely outward.

This act is being consistently photographed as if it were a spectacle. Most of the men here have printed, button-down shirts. Girls in summer dresses. Everyone is gathering on the wooden benches. “It’s vibrating!” shouts one of the girls in dresses.

I am invited by Sammy Chien, of Spatial Poetics, to sit on one of the wooden benches receiving reverberations, but Kristen Roos (the engineer behind the humming furnishings) tells me there is about to be a performance, so he has to stop the sound.

I stand beside a lamp, lifting my foot onto the block which holds it. The lamps begin fluctuating illumination as a tone is cast above the crowd. A veritable epileptic seizure ensues from the lamps. 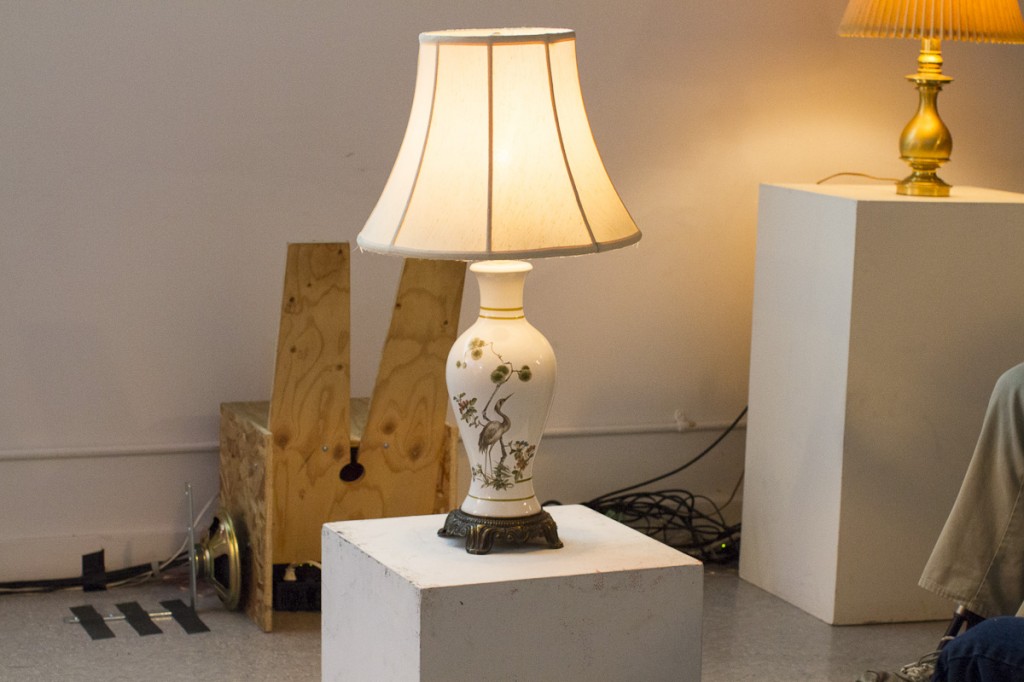 The house lights close and the lamp light becomes sporadic. The light fixtures flicker as a din echoes through my cerebellum; the din itself is akin to tinnitus, it is constant – a base for the ensuing aesthetic sound, marbling.

Adam Basanta, Julian Stein, Max Stein are seated cross legged on the floor, their arms straddling their computers which are placed along a bench closest to the back wall. Their presence is unassuming. 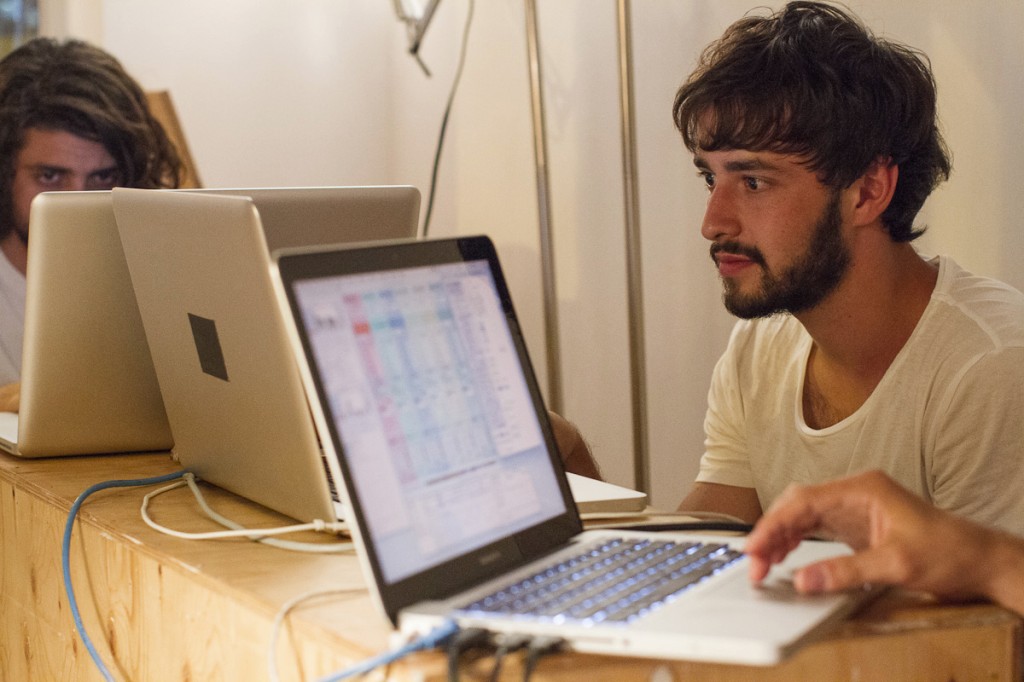 The lamp beside me flickers while a male voice harks, “… A lot of opportunities…” The disembodied voice (alternately, embodied by the lamps) vibrates through the fixtures. Bass tones blip overhead.

These lamps, while they flicker, channel their own secret sounds, cutting clips of male voices, scratching, scathing oscillations, the flick of lamp switches, like we are experiencing the lamps’ perspectives. A dusty, ethereal, bending soundscape is the constant sound beneath the “click” of switches which trigger the lamp to start and stop. These clicks begin to make their own melody. It’s charming mellow drama.

I’m still directly above a lamp; coupled with the others it performs a hocketed riff and still, that relentless constant din relapses against the circle of lamps, becoming increasingly feverish. I can’t tell whether the consistency or the leaping intermittence is more permeable to my psyche.

The lamps heap with little variation until droned radio signals play through – life in an industrial washing machine. There is an intense clanging that reminds me of keys emanating from one of the lamps, an alarm clock from another, the sound of being started from a smallish one, beeps and wires, and a sample of a male voice pushing the scene. A cornucopia. It’s becoming increasingly difficult to discover the locale of the sounds. 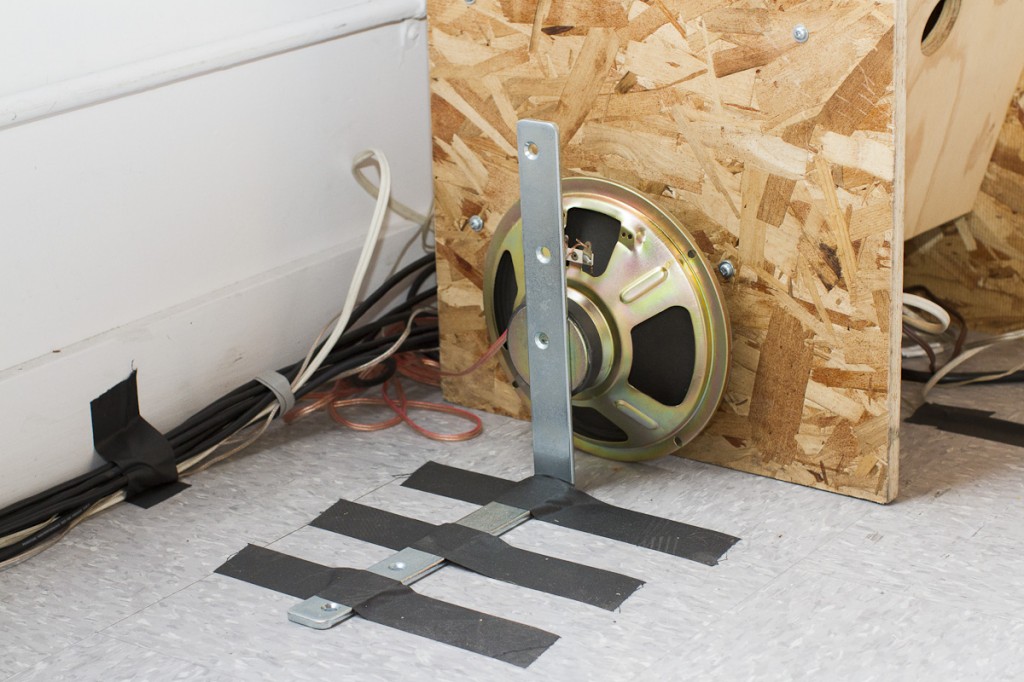 “Zip. Zim Zam Zoom Zecho. Zapp. My. My my Zimbo… Yeee of my eye echoes up,” is being proclaimed by a male voice through the lamps. The lamplight display is becoming pressingly violent. “Arrow of my Marrow.” My leg, still resting on the box, starts to concede to a relationship with the lamp. The overhanging drone is intensifying. It’s shouting. The noise is shouting through water. The bass becomes temptingly invasive. Morse codes, faxes, clicks and whirrs, perhaps typewriter keys: these are the sounds of messages being formulated. If not convulsions, the intensifying flickers are inspiring nausea and hallucinations.

The tinnitus tone starts to rise in frequency, and slicing it is a beat like a heart. Muzac, as one of the performing artists, Adam Basanta, describes, is manipulated beneath the thrush of the heartbeat. Insidious little piano licks lambaste the symphony. A wave is audible from my lamp as a piano flinches in the other. It’s cut short. Cold, cold, cold. Now, they sound like bugs, rattling – these communications are little bugs rattling with these lamps and the lives they represented are being entombed, bugs wrapping around them.

I am not sure where I am anymore and as suddenly as my existence is challenged the force stops, the lamps flicker out and we are left in dark with only the persistent hum hanging over our heads.

Kristen Roos, sound installation artist, transforms electrical hums and injects them into the wooden boxes we are sitting on. The transformed hums oscillate in the frame. Having turned the wooden boxes back on, Kristen now turns them off again and I am sad for the experience to dissipate, my body is vibrating for a continuation. 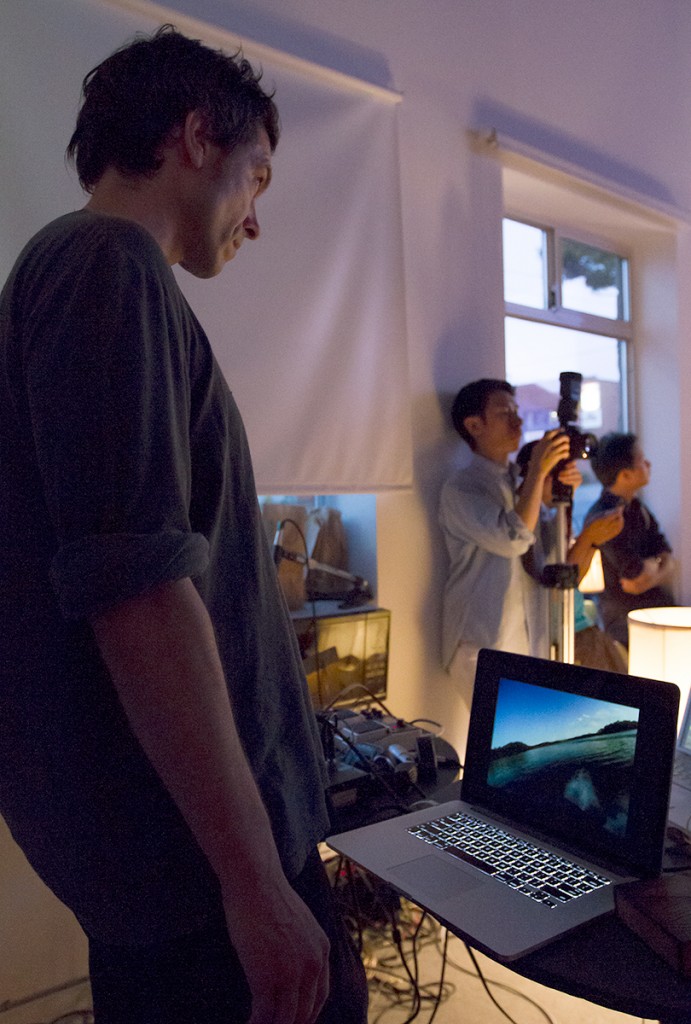 Joshua Hite is going to project a film. It starts being projected on the back wall.

Initially, we see water bursting as an unknown object falls in. This shot is repeated in various situations and contexts, all silent at first. But, as the video progresses, the utterances of the filmers are audible. First, it’s a small “heh,” and eventually, we hear the videographers screaming, “Wooh!” to “Oh my god!” to “Oh shit.” These reactions are collected from many different scenes (still, without the object being shown, just the splash) and, it reminds me that humans have a tendency to react similarly in situations. Perhaps our shared expressive vernacular permeates things that would otherwise make us unique. 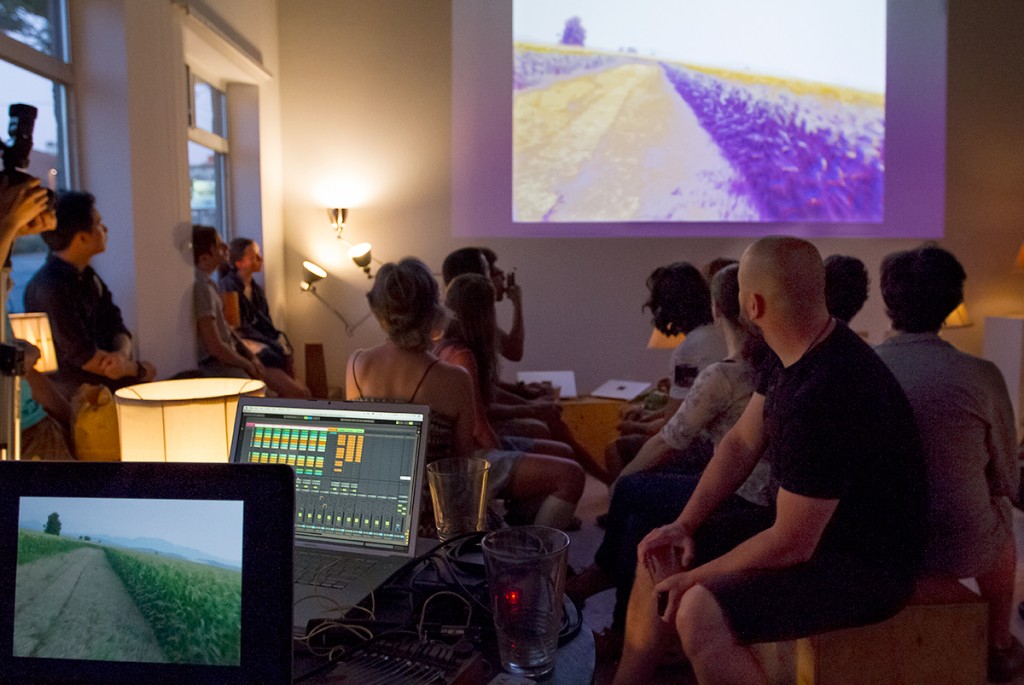 The proceeding video is a one-minute clip of a compilation of “Chug” videos, where a person is drinking a liquid ravenously while onlookers scream, “chug chug chug chug go go go,” it makes me wonder – Why do we do things collectively like this; for fun, or for other reasons?

When the video compilations are over, Kristen turns on the bench boxes again, and as I sit cross-legged over them my body starts to rattle. It’s a sensational appreciation of inaudible frequencies that are suddenly making their presence known. 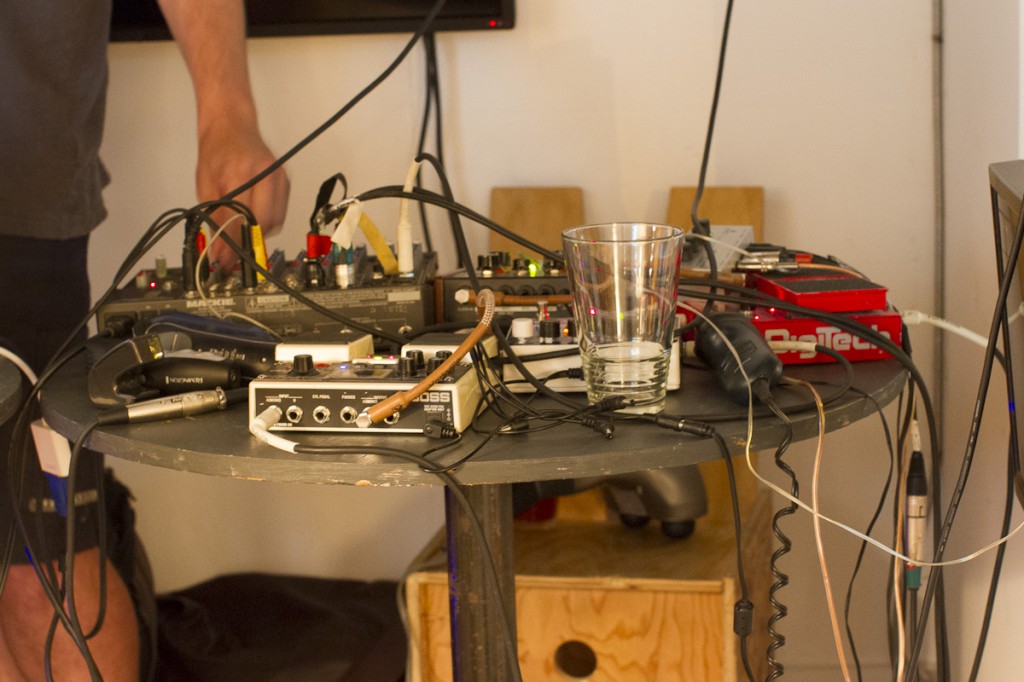 Ross Birdwise and Kristen stand at a small table, riddled with various household objects, pedals, pitch-shifters, pads and laptops nestled between the door and the window of VIVO. Kristen picks up a household electric massager while Ross holds a Philips motorized razor in his hand. I feel the pulsations of the wood.

There’s an auditory afterglow projected through the space. Between the pulsing furniture and the hum above, we are subject to these living objects. The furniture is becoming increasingly violent with their vibrations as Kristen tweaks knobs from his command station, and Ross moves the razor back and forth against the mic with concise, limited movements.

Kristen continues tweaking the knobs. I feel if I were to lay back I’d become entombed in a case like Sleeping Beauty or Snow White, championing an iridescent hell. There’s a moist beat now, clamouring for attention.

The sound of window drapes flapping and helicopter propellers puncture the soundscape. A reverberant beat as Ross plucks the mic from its rest and opens his mouth, face ruddy, and begins throat singing. At first, it seems abrasive and disparate from the throng of the beat, then it matches it, then it deviates, clustering his voice in mint psychedelia. He’s closing his eyes. Kristen places the massager down, and I realize it is the backbone of the beating of the bass permutations. Kristen sings into the mic momentarily and this hum is layered into the ambient noise. 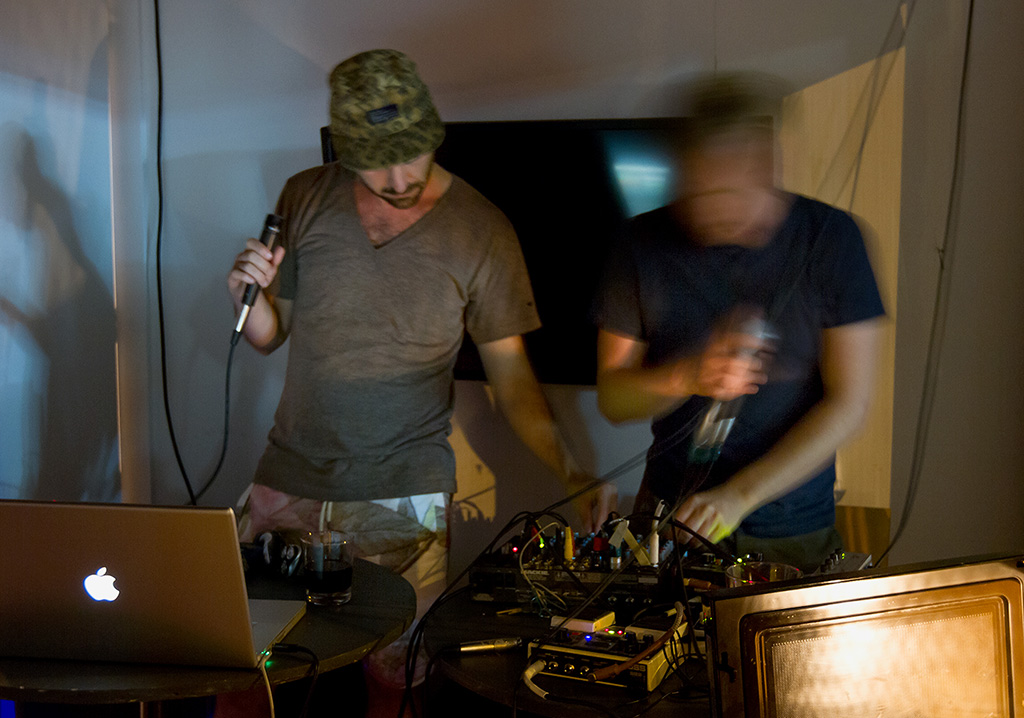 Kristen pulls a conductive instrument and a brown paper bag from his tickle trunk. The vibrations continue in the furniture. I feel overstimulated, but in the best of ways. Kristen places the paper bag in a microwave. I realize he is making popcorn. He holds the instrument to the microwave as the kernels begin to pop. In excitement, I scream “popcorn!” and he smiles and passes the bag over. The product of sound labour is delicious, but I’m scared to consume something made in such an intense shower of synthetic waves.

Adam and his partners return to their laptops and add the flickering lamps to the show. The overstimulation turns to elation. The lamps anoint the scene with their particular relevance. I eat more popcorn as Kristen pulls out another bag – I feel like I am at the mall.

There are only 24 people here, including the performers, and the intimacy is accented by Ross’ luxurious croons, and simultaneously, alleviated by the brackish lamp flickerings. There is constant noise. Kristen takes an empty beer glass and amplifies it’s sound. Much like a lamp can illuminate a space, a sound artist can illuminate a space. A special articulation.

I turn to the windows and see cars streaming past. This window provides a momentary lapse back to reality. While this installation is dependent on “real,” familiar objects, I have suddenly become unaware of what they mean. This forceful sound is provoking dissociation – things have begun to lose meaning. But now there is shapeshifting, and the sound of chimes crackles through the noise, and romanticized 1940’s string arrangement pushes through. Kristen leaves his objects, walks over to Adam and says, “I think I’m done.”

MUSIC FOR LAMPS is an installation and performance work for sound and light emitting lamps performed live by Adam Basanta, Julian Stein, Max Stein, all from Montreal.
musicforlamps.com

MUSIC FOR INTERNET is Josh Hite, whose work is primarily concerned with human movement through local spaces. From Vancouver.
youtube.com/user/mtcobbjh/videos

MUSIC FOR FURNITURE is Kristen Roos and Ross Birdwise. Both are Vancouver-based sound artists.
kristenroos.com
birdwise.tumblr.com

VIVO Media Arts is one of Vancouver’s oldest artist run centres. It focuses on video creation, editing, and archiving, equipment and studio rentals, as well as educational workshops.
vivomediaarts.com