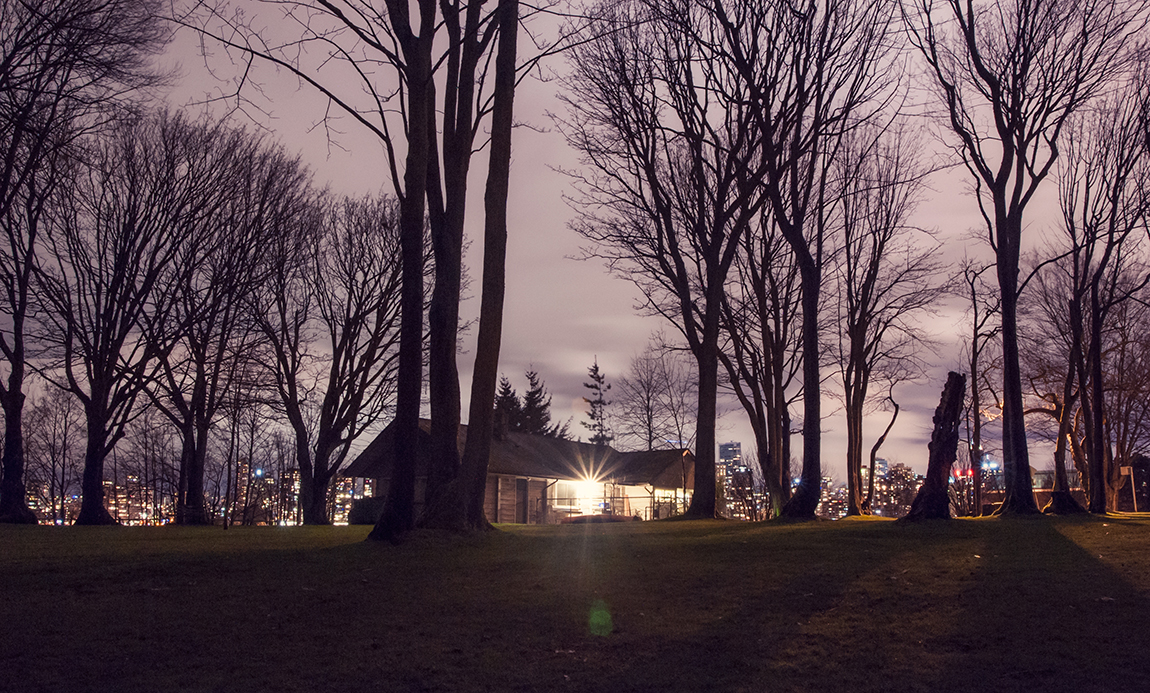 Frequently one of the first sounds heard by those entering the ten fifteen maple field house, artist Kristen Roos poses the question whenever a newcomer is spotted. Offering a cheap can of hospitality, Roos sets a social tone that frames the performance of his new sonic installation, thrum.

Whether an aspect of his project, personality, or just a result of years of familiarity with the field house space, Roos is a welcoming host. This openness quickly dispels conventional artist / audience separations, and establishes an environment of casual discourse which pleasantly and somewhat surprisingly frames the performance. While an artistic work at its core, thrum has on every side the atmosphere of a domestic gathering.

Open to the public February 6-8, the work centres around two ubiquitous late 20th century domestic devices – the microwave and the cordless phone; and also their 21st century counterpart, the Wi-Fi router. All three operate at 2.4 gigahertz, a standardized broadcast range that each device transmits on with its own distinctive pulse and rhythm. Roos has orchestrated the signals into a sonic experience that overtakes the field house – made possible by its removed park location, a high frequency analyser, and the artist’s own technical tools and abilities. 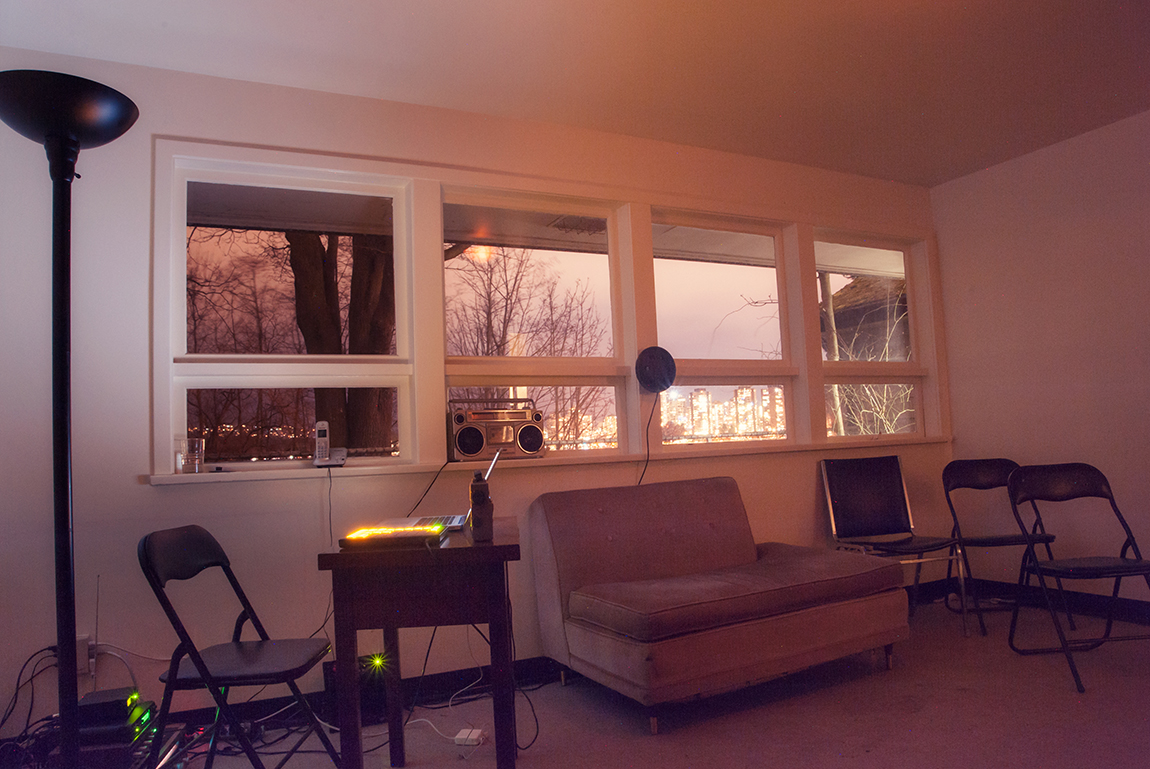 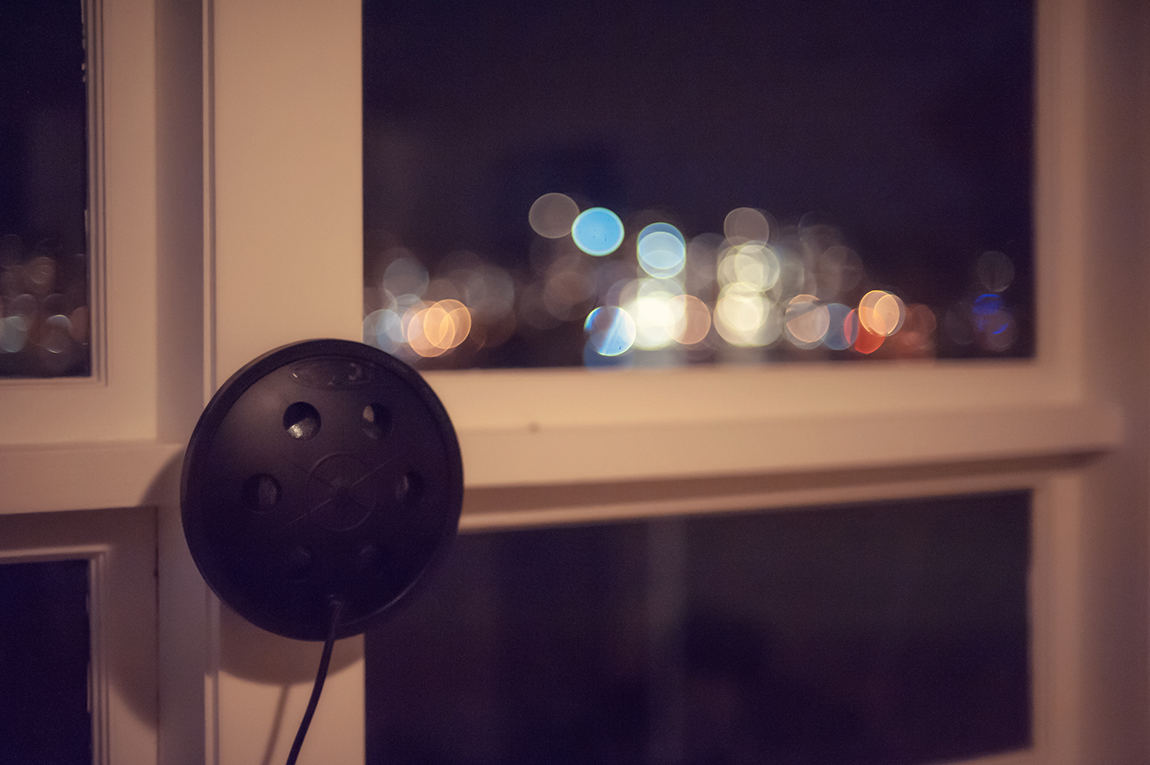 Using the specialized “electrosmog” high frequency analyser, Roos brings the 2.4 ghz  frequencies in to audible range. Through triggered recordings, synthesis, and live manipulation, the house where the signals were captured is turned into a resonant structure, driving the usually unheard frequencies into sonic materiality.

Bass speakers normally meant to rumble seats in home theatres are repurposed to shake the bank of windows and frames along the north side of the house, which growl out slow pulses of rattles and throbs. A floor mounted speaker with a metal bit mounted on its diaphragm percussively rattles a human-height gas heater set on the wall, while a hidden sub bellows and rumbles from a closed room. Monitor speakers play live translations of signals from the microwave and phone, adding elements of performance and instrumentation. As a practicing electronic musician, Roos has orchestrated the experience with a strange musicality, beats supported and subverted by flickers and drones. In one room sits his laptop and trigger station, and in another, the various pedals and electronics that synthesize and shape the sounds. 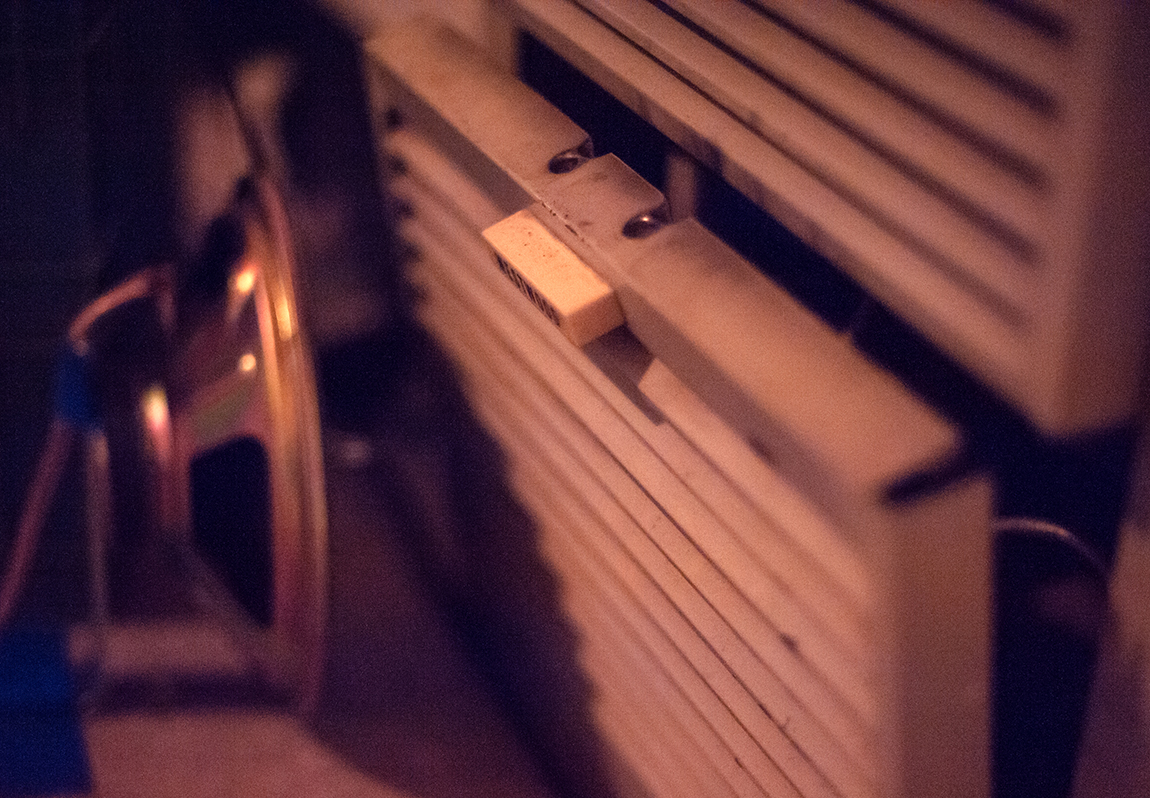 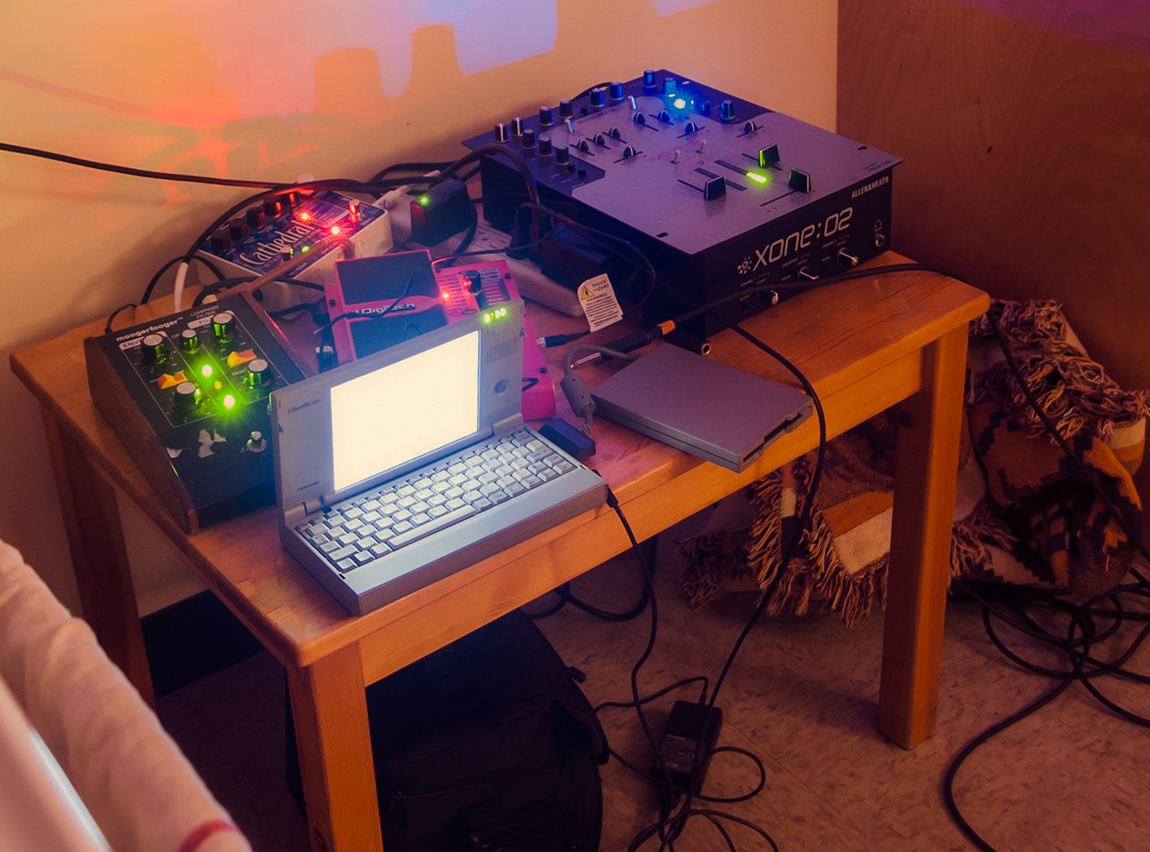 Prior to the performance participants are encouraged to move around the house, and in doing so each dynamically mixes the sounds as they navigate the space, drawing themselves from one source to another. Throughout the 45 minute duration Roos casts about the darkened space, a one-man mobile switching station. At times his actions are inscrutable in the low light, as he hits unmarked triggers; at others his motions embody the changing sounds, such as when he pulls swelling drones from the activated microwave using the HF analyser. Invariably the soundscape maintains an active character; even with eyes closed the swarming layers of sound have a live, almost animal presence.

On Sunday night, the performance easily hits the 20 person capacity. With people filling the rooms, many are quick to reach for walls, windows and other surfaces, feeling for the movements of the shaking structure as it sounds. The signals run over and through the listener, never overly loud, yet present in the body as much as the ear. Uncertainty of how these frequencies affect human bodies when in the native electromagnetic range is highlighted by their absolute sonic infiltration. The signals have been given physical presence in space, pushing up against the bodies in the house. 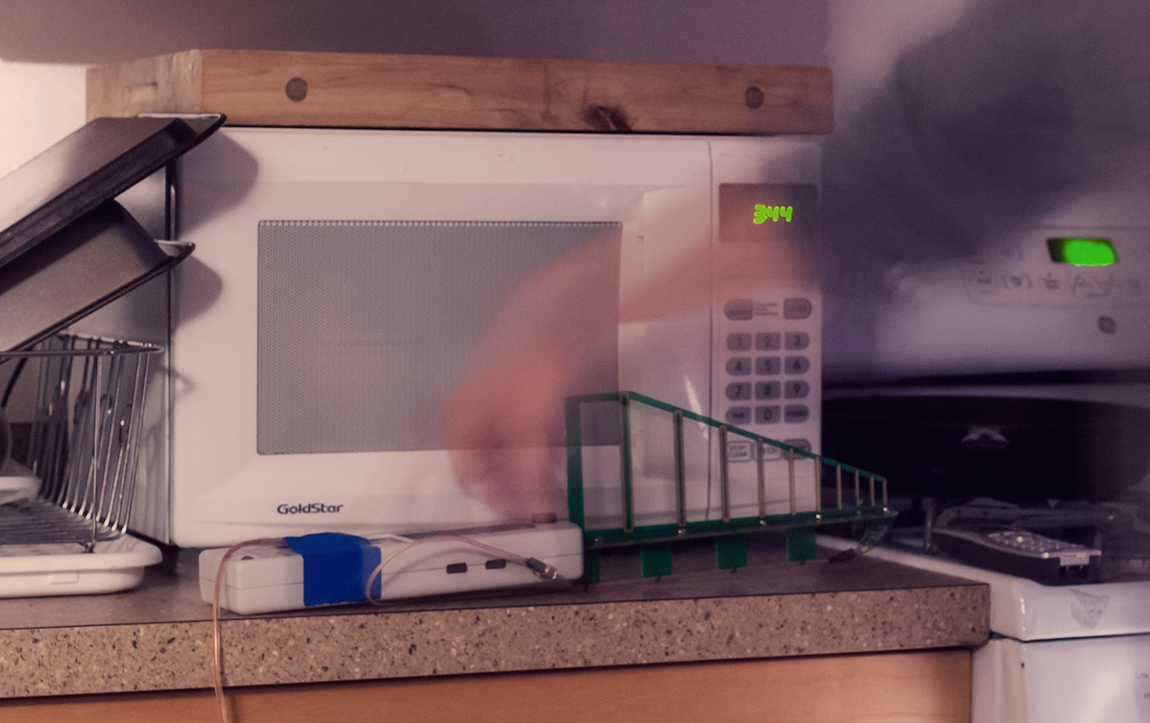 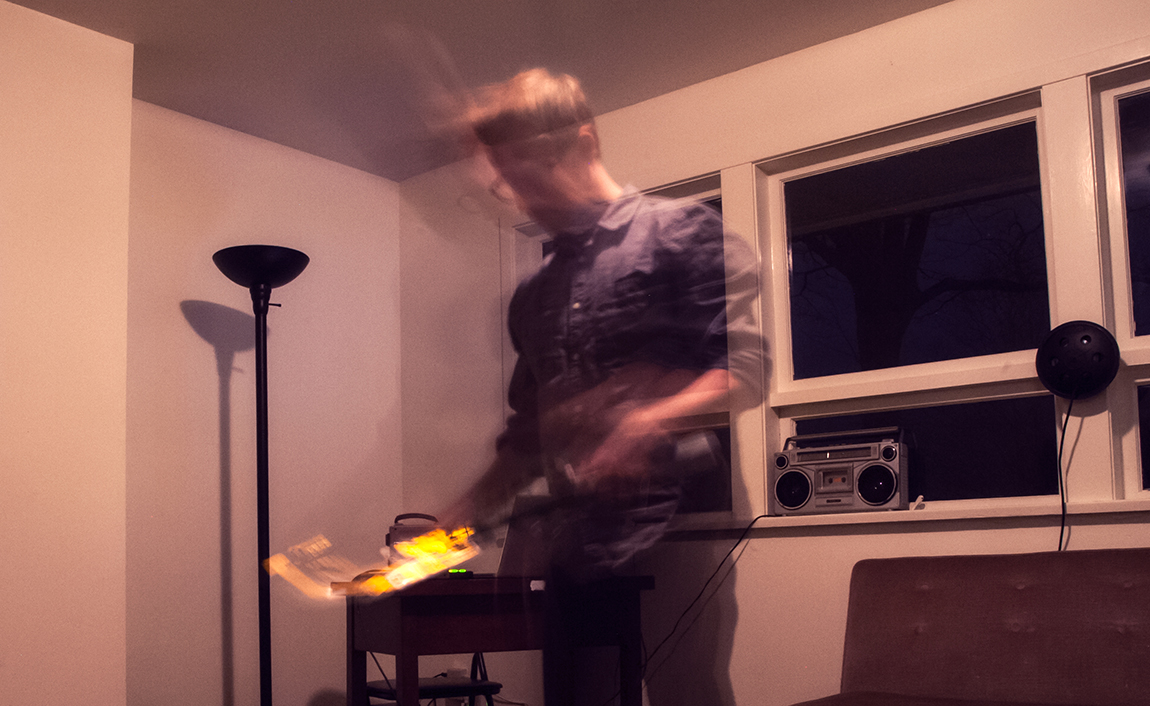 Across the water through the north windows, the stacks of light downtown stand as a visual reminder of the storms of EM radiation that serve and surround daily life in the urban environment. Individual signals are incredibly difficult to capture in a high density setting, as hundreds simultaneously propagate through space every second. The relative isolation of the field house provides space for signals to be picked out individually, separate from the mass of noise their transmitters are commonly situated in.

The need for isolation points to larger implications of thrum. As Roos identifies, there’s a menace entangled with the odd beauty of the sounds. When the smog of EM radiation permeates our cities, all so reliant on technology, how does one conceive of the self within this noise? Does an escape to nature offer some liberation, or has it become a fetishized cure for urban uncertainty? Is our abundant access to technology plight or privilege? After the performance conversation rises up quickly from the ensuing silence, the audience and artist compelled to parse out the ideas and affects the work elicits.

thrum doesn’t attempt to make a statement as much as it allows a vocalization, a site of presence for once silent transmissions. It generates a sonic catharsis that envelops listeners, as our hyper-connected condition is here embodied. Yet it is coupled with an identification of release for the frequencies themselves- having been given this house to fill with their strange voices. Roos has provided a stage for this communication, a gathering place for the conversation. 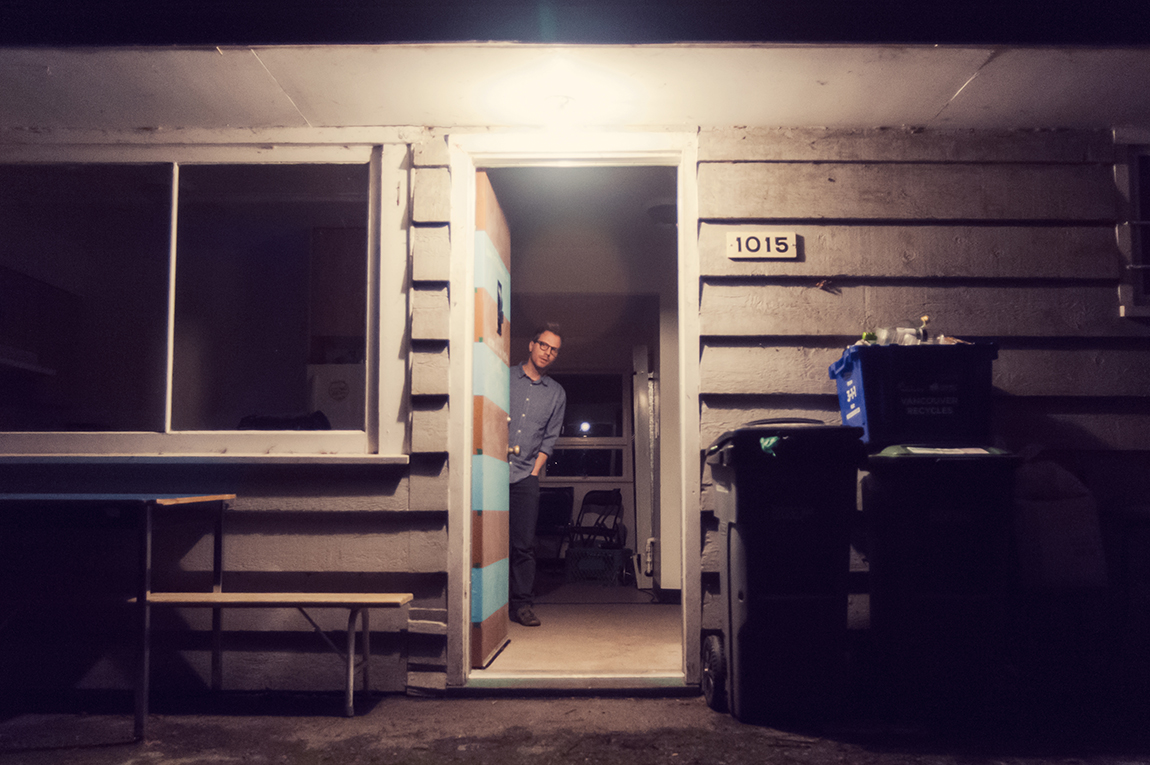 One Response to House Calls