An accumulation and performance built by unlikely architects, created and directed by Megan Stewart 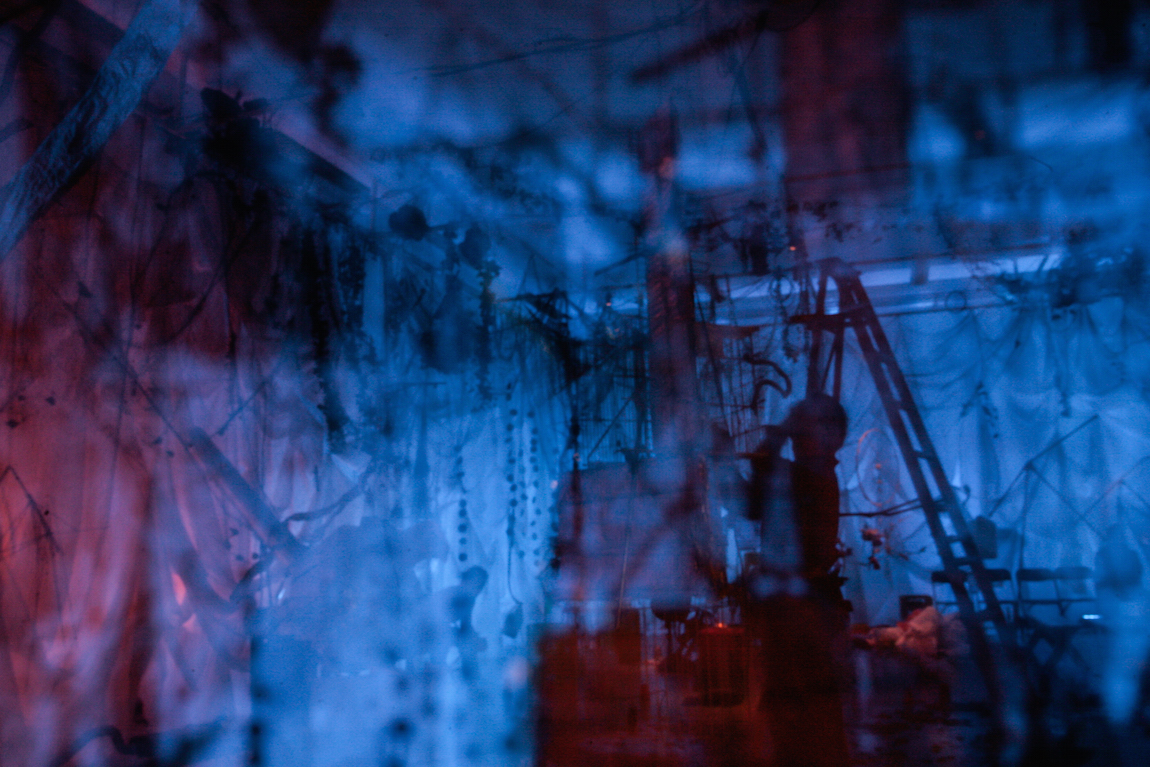 Megan Stewart has always had an acute fascination with folk art, and her performances often take cues from this movement, possessing a vibrant, handcrafted aesthetic that is as fabulous as it is fantastic, in the original senses of those words – that is to say, “fable-ish” and “fantasy-like“. Her stories tell themselves the way dreams do – they are wild and wise and sometimes absurd; and while their literal coherence may wax and wane, they have an intuitive, internal logic that remains consistent throughout. Stewart’s latest work, The Builders, brings a new level of brilliant eccentricity to her reverie-like repertoire: the basis for the performance is the phenomenon of art environments, a “folk” or “outsider” art practice where an artist or builder seeks to radically reimagine a space through an accumulation of repurposed objects.

As she explored both well-established and obscure art environments throughout North America, Stewart formulated her ideas for The Builders. These initial ideas were further elaborated by her ensemble over a five-month creation period, as each of her collaborators (Robert Azevedo, Gordon Havelaar, Eveleen Kozak, Keely O’Brien) became builders in their own right. What culminates is an immersive performance within an extensive set, which is perhaps the most pervading and phantasmagorical that Stewart has ever made – an environment in every sense of the term. 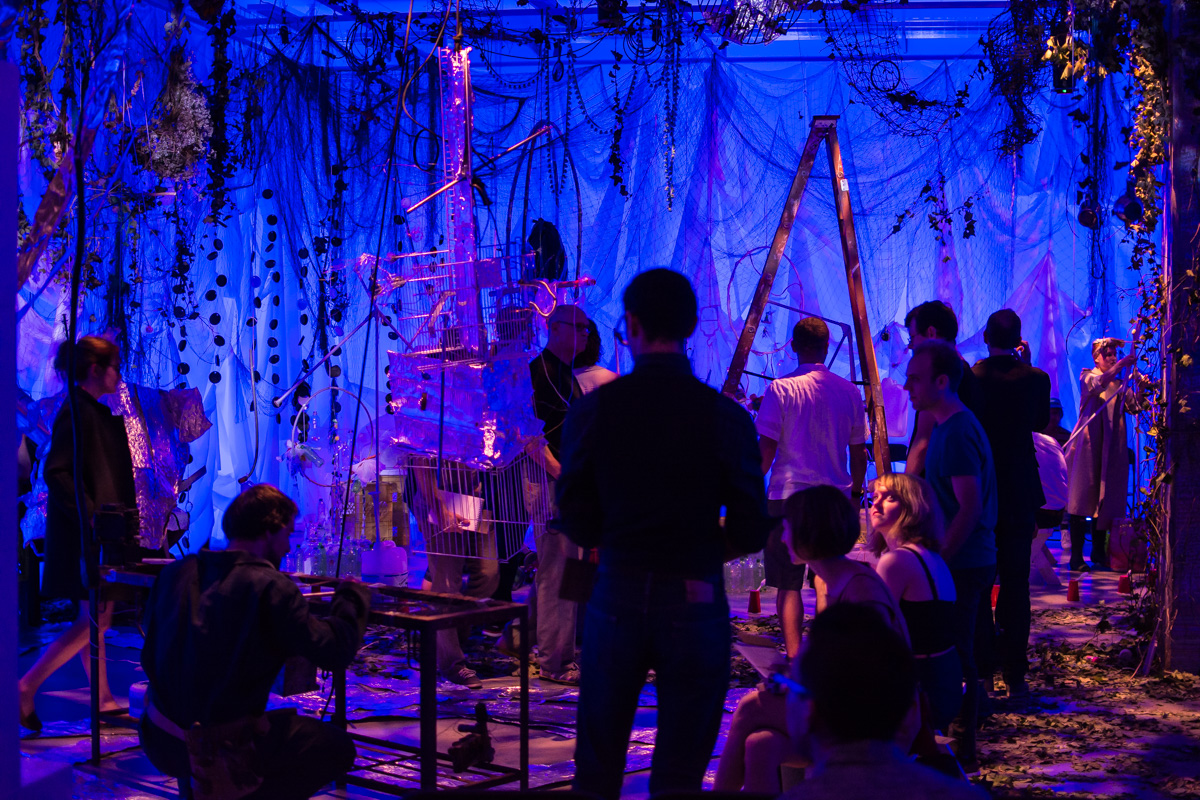 The Builders begins by shuffling the audience into a freight elevator behind the box office of SFU Woodwards, transporting them down to the basement of the building. They are then led into a vast, two-tiered visual arts studio, completely transformed by the various installations that the ensemble has created. The lighting is dim and moody and mysterious, and the music (prepared guitar performed live by David Cowling) is beautifully suited to the atmosphere: sometimes it is discordant, simulating or reverberating with the clanging and clattering of the builders’ activities; and sometimes it resounds in low, melodious harmonies, contributing to the hypnotic wonder that affects the characters and spreads contagiously to their spectators. An enormous lattice of mesh and netting encloses the set like curtains, and supports the standing, hanging, and ever-shifting art environments that the audience are left to navigate in confusion, curiosity, and awe.

The performance features four loosely interconnected characters in four strangely interwoven spaces, as they try to impose some chaotic semblance of serenity and order on a world that has ceased to accommodate them. To this end, they each maintain a highly-stylised art environment, a rag-tag, elemental realm of reclaimed and recycled materials in which they – or in some cases, their alter egos – can exist without compromising their passions or their persons. The art environments, in this respect, are something of a refuge, or even an escapist retreat from reality. The director’s note describes how “we all engage in long term process of carving out a particular, personal space for ourselves amid the generic chaos of the world.” Thus, it can be argued that The Builders has an inherently utopian bent – an insatiable impulse for unity and accord. 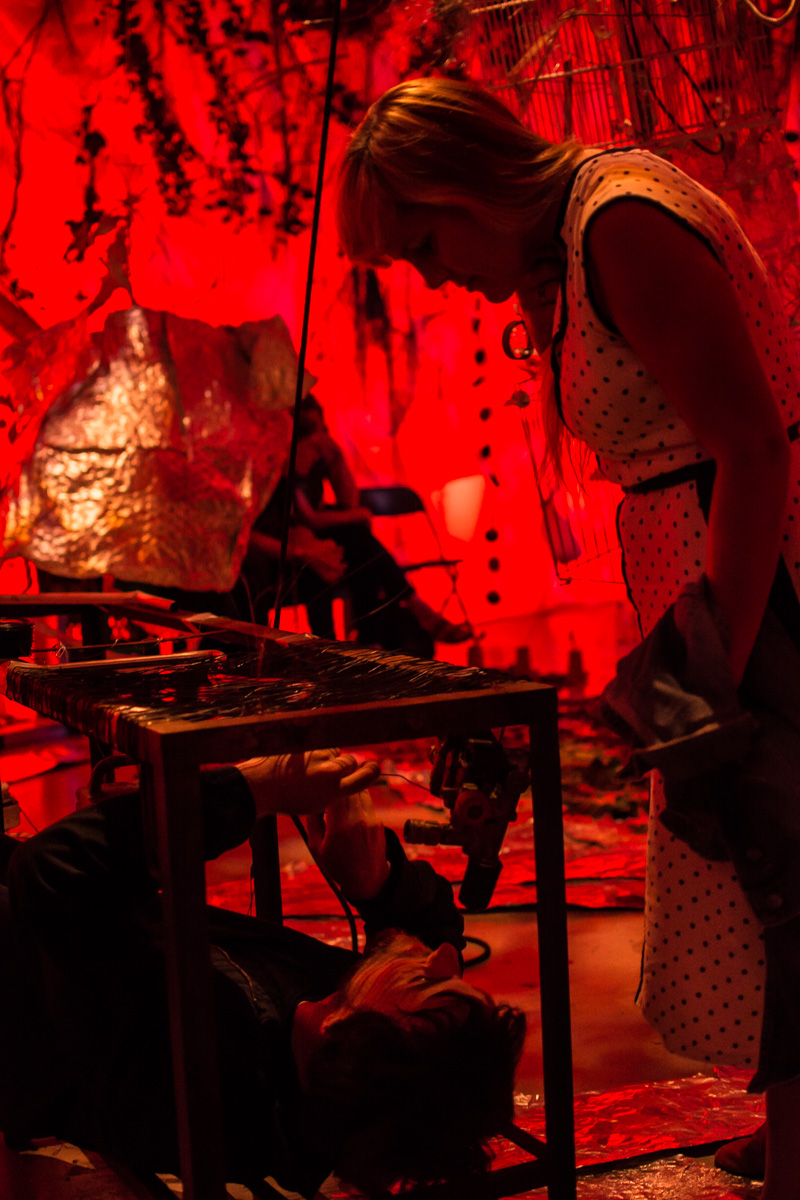 But what is a utopia? A utopia is a delusion; a delusion which, when collectively held, can have disappointing – and sometimes disastrous – consequences. The acclaimed philosopher John Gray posits: “A project is utopian if there are no circumstances under which it can be realised. All the dreams of a society from which coercion and power have been removed – Marxist or anarchist, liberal or technocratic – are utopian in the strong sense that they can never be achieved because they break down on the enduring contradictions of human needs”. What can possibly be salvaged in the shadows cast by such a pessimistic perspective? Or better: what can be built? In The Builders, Stewart answers this question by showing how a sense of poignant belonging can be discovered on a small scale, in a space that is otherwise bleak or blank; it seems perhaps the only valid utopia is an undeniably personal one, perceptible and hospitable only to the demiurge who took the time to design it. 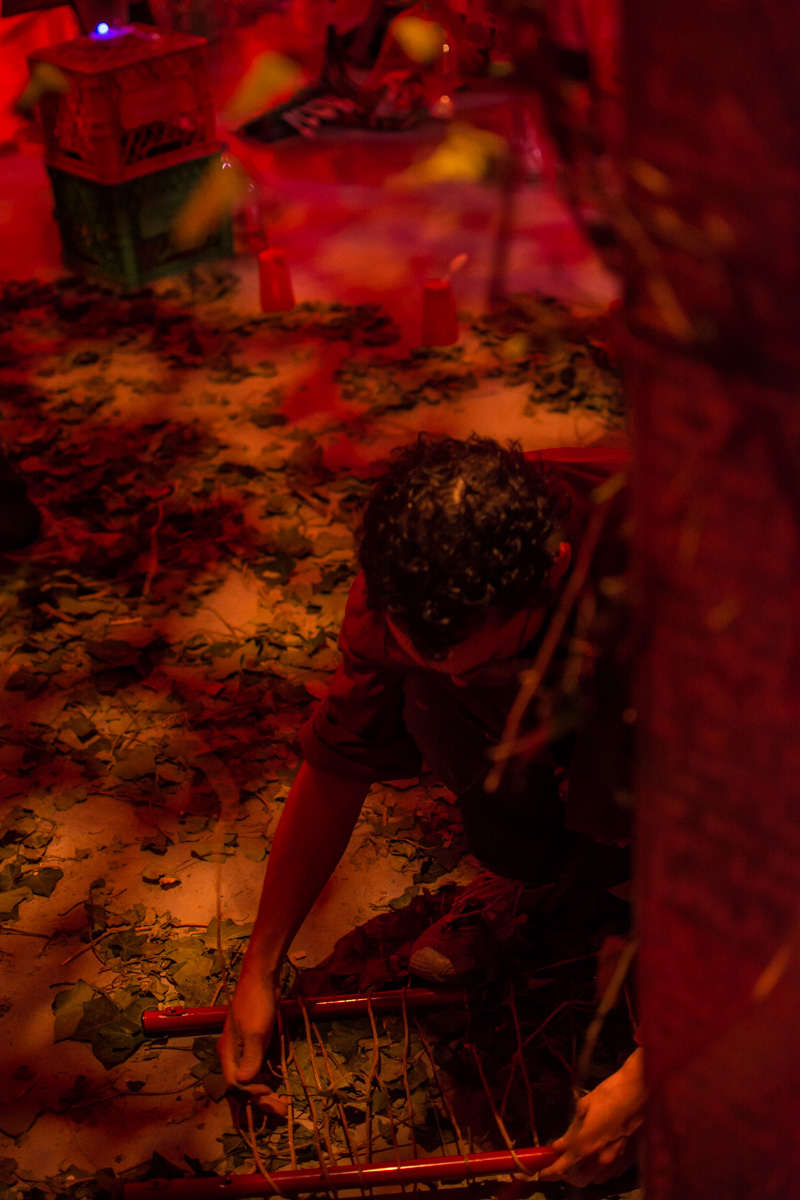 In the absence of a social utopia in which one can seek solace, the oddball protagonists of The Builders shrug off the senseless oppressions and conventions of the society that surrounds them, and set themselves to the sublime task of cobbling together their own unusual havens – or perhaps, heavens. But they are small, makeshift heavens; tiny nooks and crannies where the four nonconformists set to work in an ongoing misadventure of creation and recreation. Isolated and territorial, these eccentric and enigmatic architects afford their audiences no quaint, cozy allegories of camaraderie and cohesion; instead, they reveal the infinite little ways in which a space can be explored, adored, claimed, conceded, and endlessly changed by anyone who identifies with it, and calls it a home. 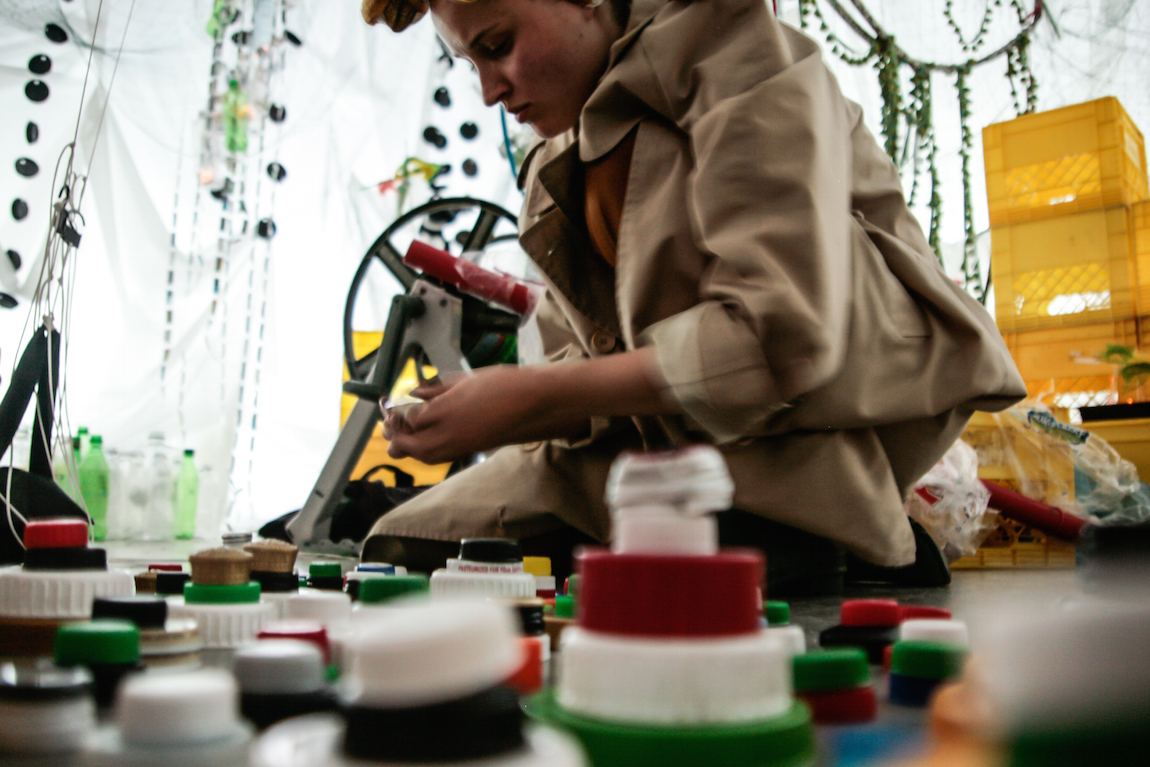 While there is dialogue, there is little that can be called a dialogue; with only a few exceptions, every character operates in a virtual void, though each of them is continually aware of the worlds being built by the others as they transform the common space. When they do speak, their words have a rhythmic, lyric quality, though they are quite cryptic. The audience can watch the builders work, listen to what they say, and certainly share in the characters’ sense of quiet catharsis. But they may never understand what they are building, or why. There is indeed something dystopian about the lady who landscapes her garden of garbage, something mutely mundane about the divinely-inspired Rhinestone Cowboy, something desperately quixotic about the man who loves the Venus of the trees, and something mesmerizingly vacant about the metalworker so intrigued by his little corner of the universe that he rarely utters a single word. Yet in various ways, all of the builders attain their own revelation, regardless of how silent or subtle it may seem. 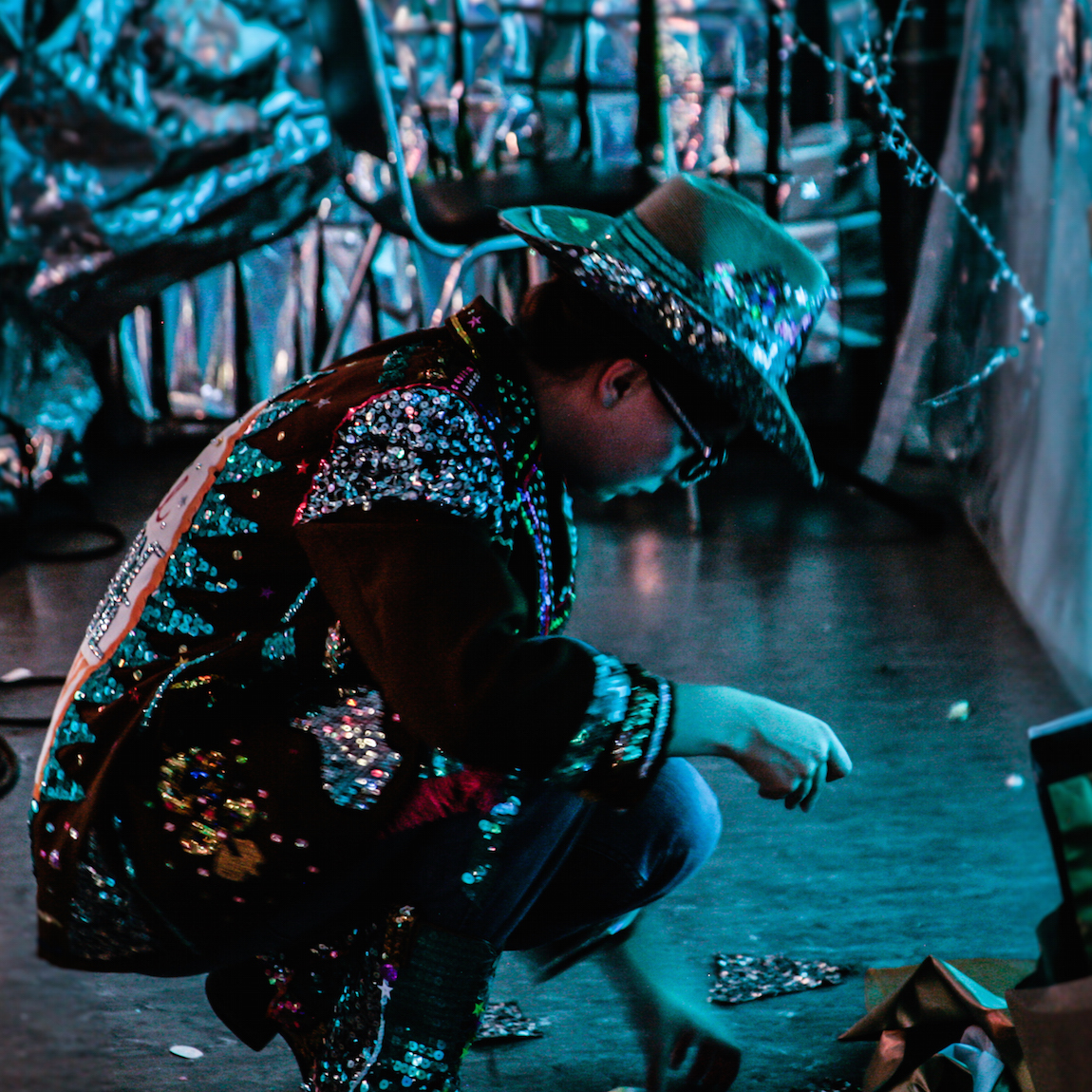 Indeed, it is this silence and subtlety – this indelible, incredible sense of belonging in solitude – that sets The Builders apart. A lot of contemporary art makes plain its intention to involve and activate the audience, purposely turning them into collaborators or participants. And in many ways, The Builders continues in this mode: the spectators are meant to be mobile and inquisitive, traversing a space that melds theatre with an immersive art installation. But what changes here are the ethics: as the characters claim exclusive space through the creation of art environments, there is an innate isolationism here, an individualism, and a territorialism – but not in an inherently negative sense. Quite the opposite, actually: in a world of mass consumerism, were personal identities are increasingly pre-packaged by products and advertisers, where “trending” and “following” on digital media trains people in passive and complicitous thinking, and where human acquisitiveness is desecrating the planet, there is something profound to be said in defence of these builders – those who accrue a small, unique space for themselves where they can be absolutely at peace. And though art environments may begin as personal projects, they end up being sites of social exchange; for if a self is articulated through a physical locale which can be experienced by others, it effectually ceases to be a self in any conventional understanding. 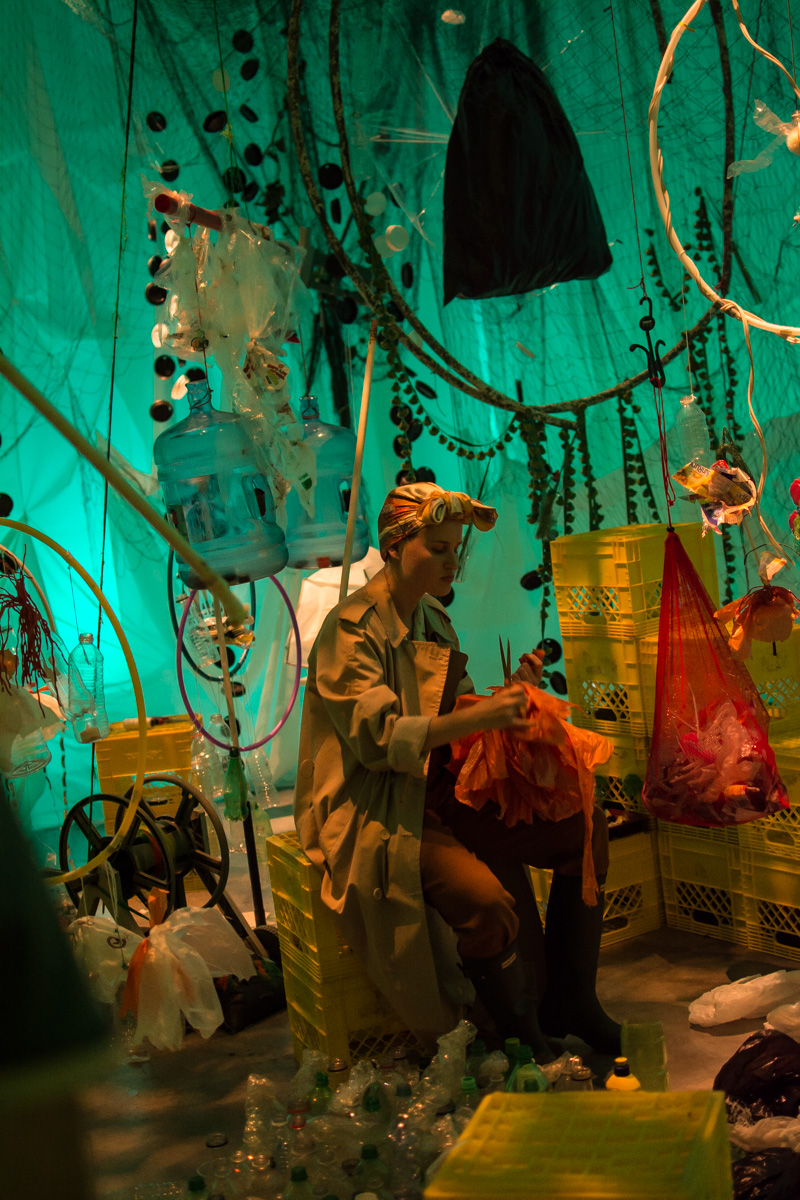 Stewart suggests that, in some ways, we all are builders of our own environments, envisioning the spaces in which we live as extensions of who we are. The niches that people inhabit – physically, socially, and psychologically – provide them with a sense of belonging and identity, where they both transform their surroundings and are in turn transformed by them. But for many, these articulations of personal belonging and identity can be appraised in an interior design catalogue, or bought at a store; for builders, they are compulsively sought – whether consciously or subconsciously – in uncanny and unexpected places. And ultimately, that is what Stewart’s performance is: an uncanny, unexpected place of paradoxes – where introversion and introspection allows for interpersonal awareness, where the animistic and holistic permeates the atomistic, and where selves are sublimated selflessly into space. 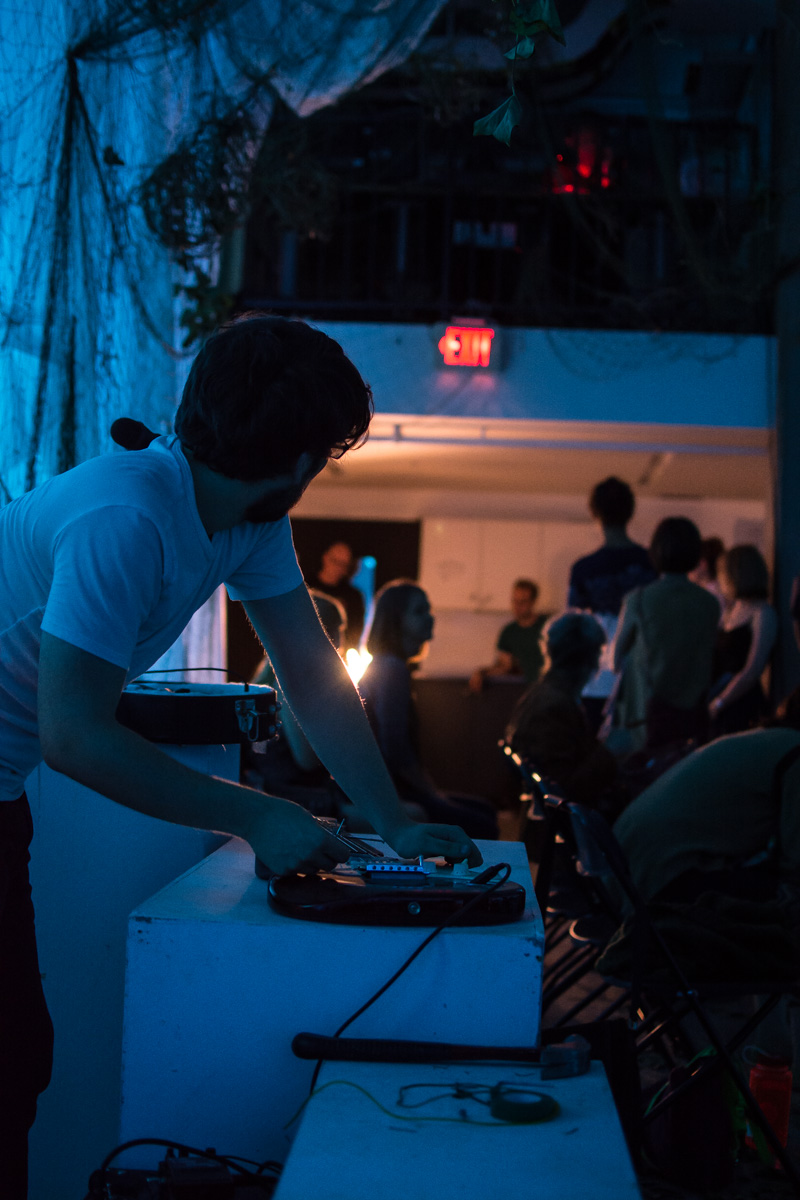 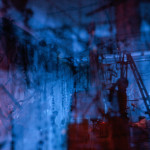 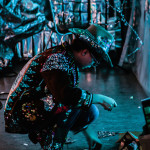 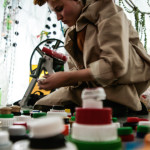 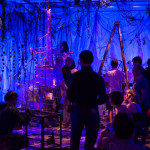 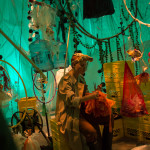 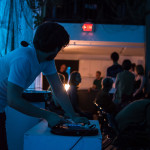 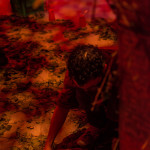 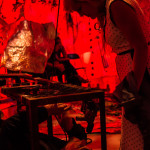 One Response to Sixty Minutes of Solitude: A Review of The Builders

Whatever This Is It Won’t Last Long