Vancouver photographer Michael J.P. Hall tantalizes us into reconsidering our relationship with plastics, and the biography of image appropriation

I walk into Science World for the opening of Michael J.P. Hall’s photographic exhibit Entanglement: A Vision Of Our World With Plastic, and am directed to go upstairs where I find a group of people mingling, a bar and a DJ booth.

My first view of the images is from this relaxed social atmosphere. I lean over a glass banister to see six large photos arranged in a triangular shape. On the top of the pyramid is a portrait of a man being engulfed by his plastic headdress. The next two images below are a man, woman and infant child curled up in a bird-like nest of plastic, and a woman in a plastic dress with headdress and staff standing regally on a stormy beach. These three strike me the most out of the six large photographs. 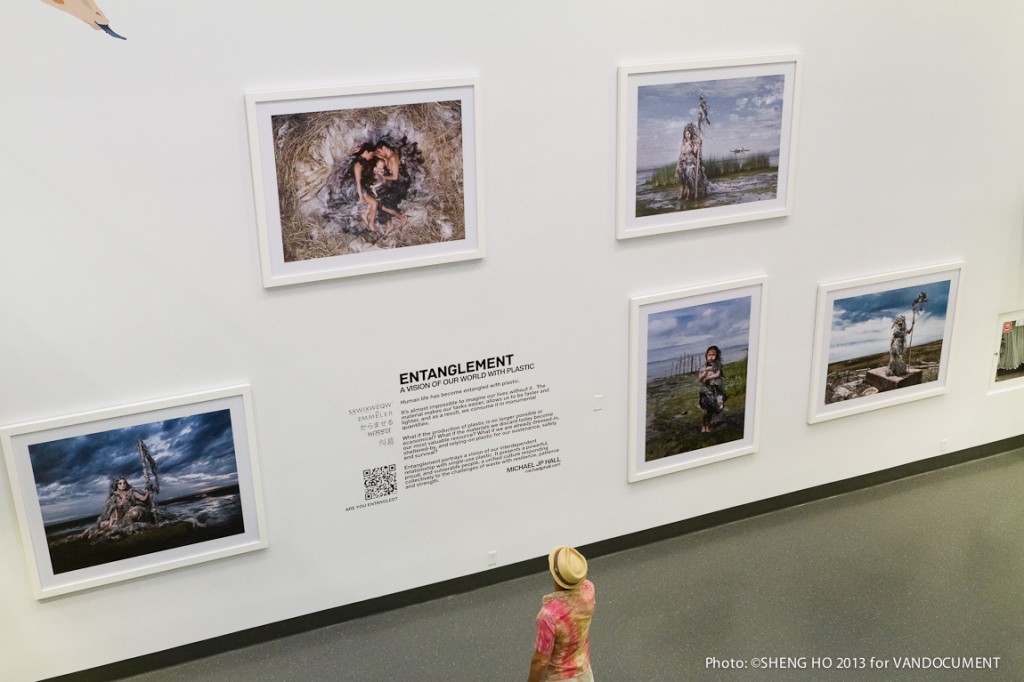 I settle into my role as eyes, ears and scribe. I skim over questions that had come up for me when I first saw a postcard for this showing: What is it like to have the plastic so close to the body? Why does it seem so extreme to see waste plastic as clothing, when we exist so intimately with it already? What is our relationship with what we see as grotesque, and how does this keep us from understanding it? Why do the costumes include headdresses, face markings, pseudo bone breastplates, necklaces, and staffs? 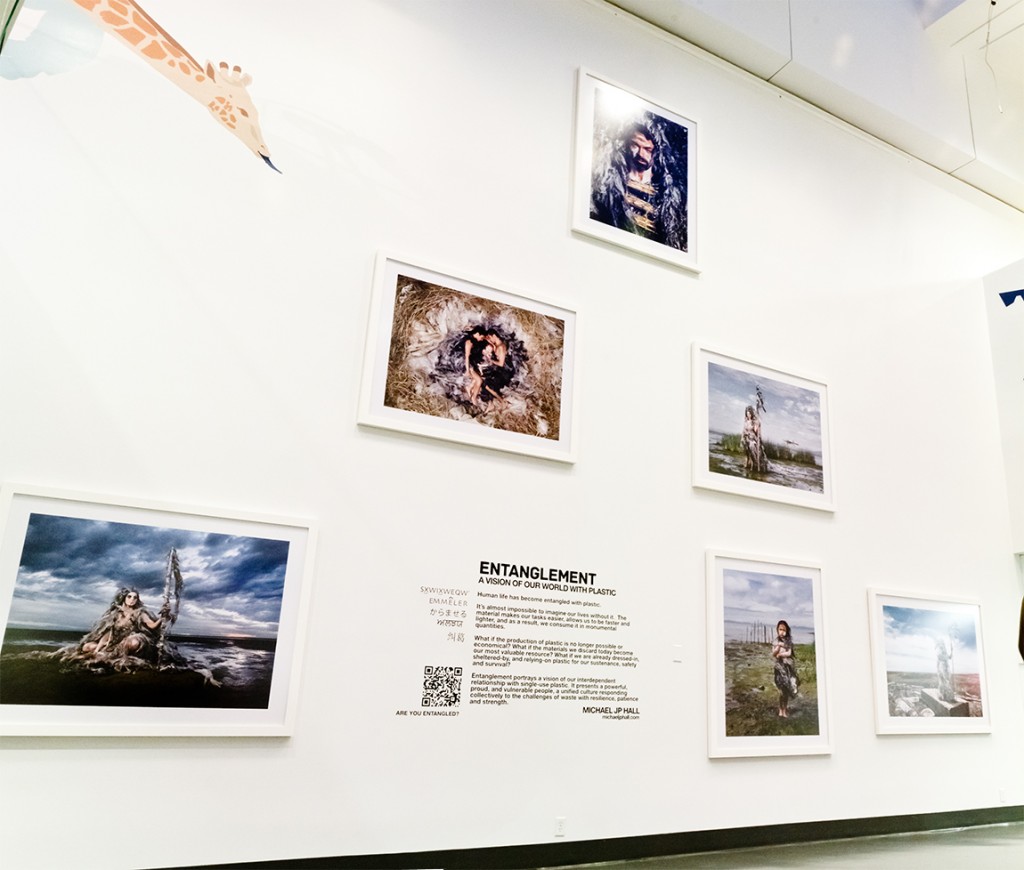 I wander downstairs to take a closer look. I am struck by the look in the eyes of the actors. At once severe and sweet, they look like thin ice – inviting us to walk into their rich yet fragile existence. The look is urgent yet gentle. This is mirrored by a brooding landscape of dark clouds and dark ocean.

The quality of the image, the defined curve of a cloud and continuity of colour scale, is clear and precise, and yet, the content is fantastical. Who are these people and what does the fantasy mean to us? The fantasy is attractive to say the least. 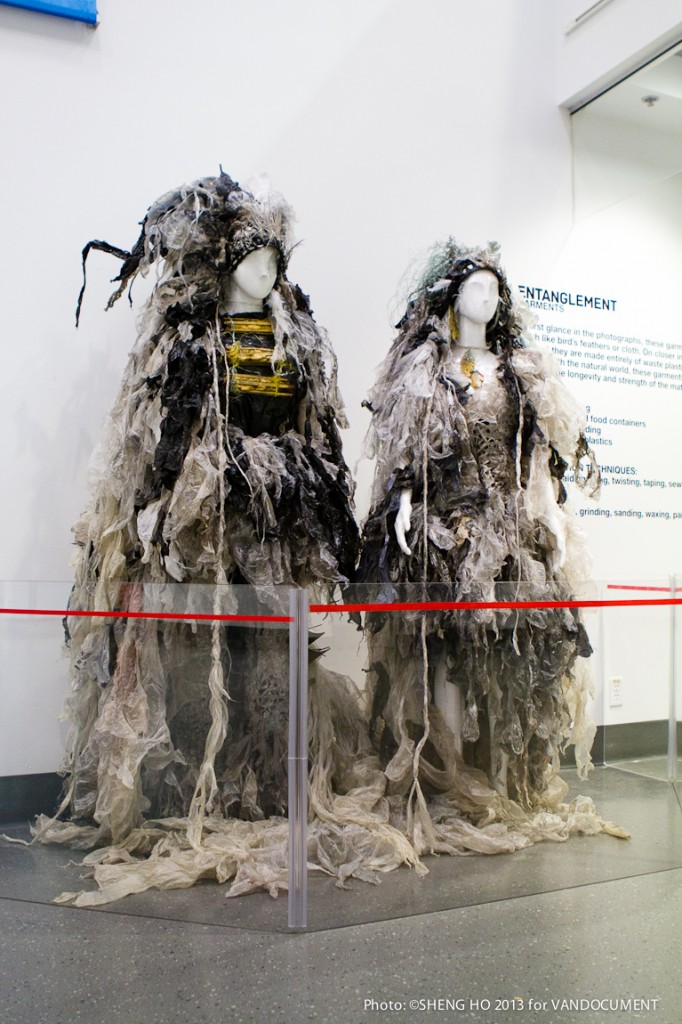 The craft involved in making the costumes, also on display, is intricate, detailed and looks a mix of an 18th century period piece, Labyrinth and Waterworld. Plastic that has taken multiple hues from the dirt it has accumulated, that has become a layering of textures from use, is bent and shaped around bodies in a beautifully architectural manner. The plastics are waste plastic, and wear the dirt and grime with panache. These pieces are found plastics, gleaned from places like movie sets and construction sites. Weaving, folding, and braiding are listed as some of the methods in the process of construction. 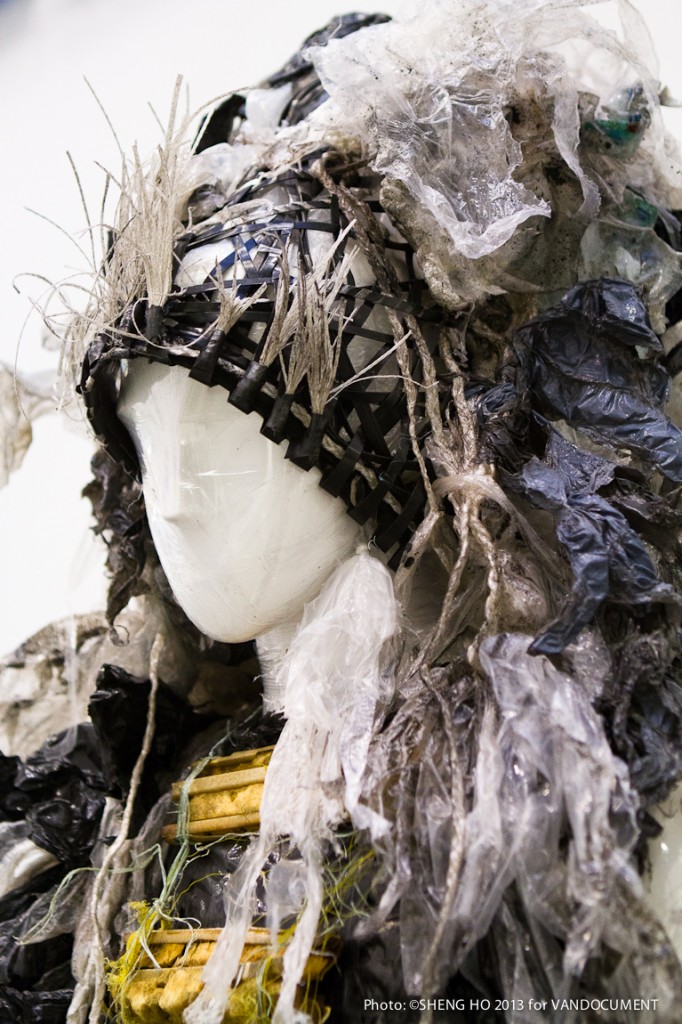 The actors tell me they were hot to wear, and didn’t lend themselves to moving around too much. One tells me that the spirit of collaboration was integral to the process. Another actor, who didn’t know Michael before this project, appreciates the intuition that Michael had to stop him on the street and ask him to be a part of the project. This same actor speaks of his views on the Alberta Tar Sands, the politics of plastics, and the circular dependence we have to always buy new products. 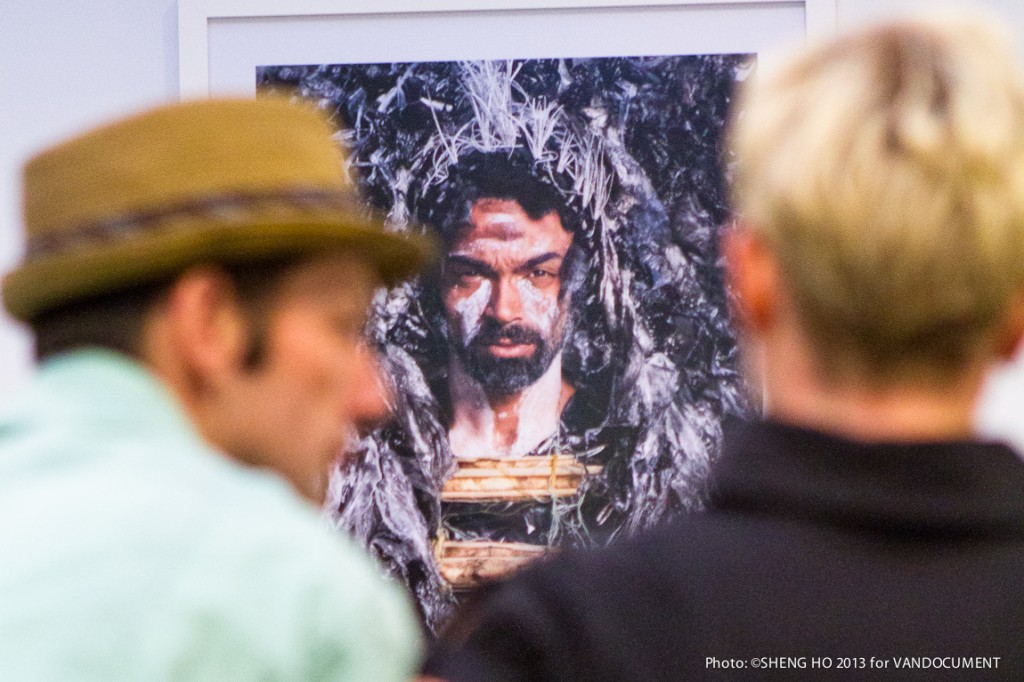 I stand and examine the six large scale images, speak with others staring alongside me, wander and ask people questions. We speak of many things: how we came to be here, what aspects of the images impact us the most, theories about the environment and politics, and a sprinkling of self-promotion and card wrangling.

A philosophy reveals itself to me through conversations I have in the space, surrounded by the art, and by the people engaging with the art: We attempt to find ourselves in imagery. We search for commonality, a point of connection. This search sometimes takes us away from seeing the true beauty of diversity, away from recognizing difference and understanding it as a social process. Is this the place where we can truly begin to bring our proverbial demons out of the closet?

This is the spirit of repurposing: repurposing not only the physical reality of plastic from under the surface of our psyches, but also the repurposing of our way of dealing with the darkness of this reality. The shadow of denial looms large in these images, it scratches at the lens, screams from under sleeping babies, and scrambles through remnants of our animal selves. 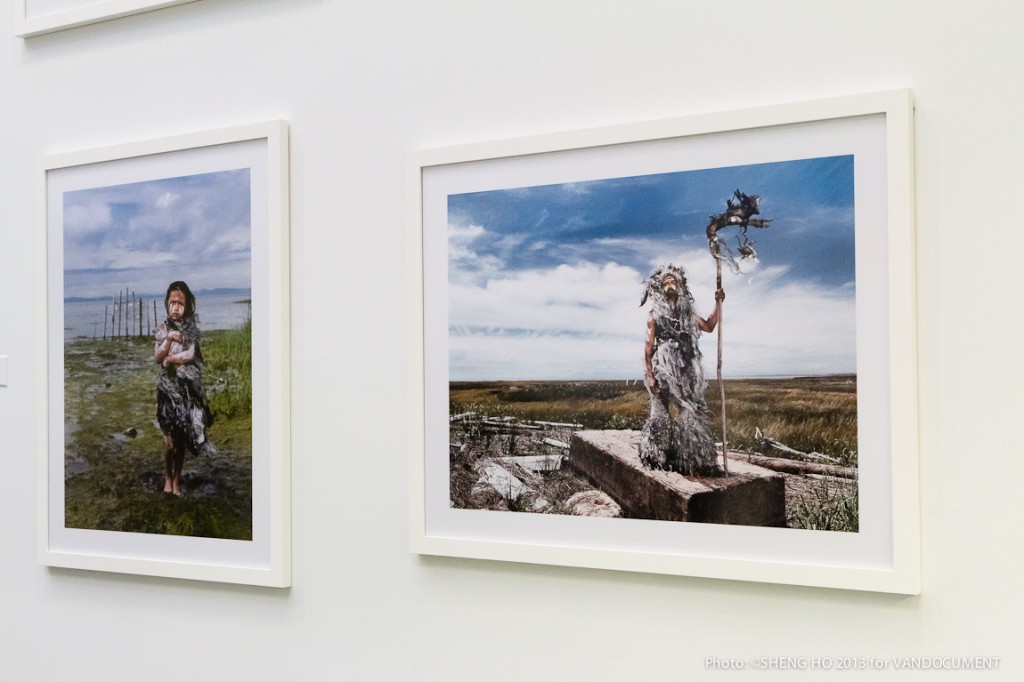 Perhaps the most beautifully disturbing aspect of these images is the stoic pride in how the subjects wear their plastic. It’s not going anywhere, it won’t disappear, it’s the permanent beast we have created to solve impermanent inconveniences.

I find the artist, Michael J.P. Hall, and talk to him about the pieces. Michael speaks of his experience as an alpinist finding plastic in the deep mountains. He articulates that Westerners are good at hiding a problem like waste plastic: “We concentrate it, we push it into spaces that people don’t see, and what I’ve seen over the course of my life, is it bubbling up and coming up in different areas and coming to the surface and being visible now, being unavoidable.” This unavoidability is the entanglement we find ourselves in. 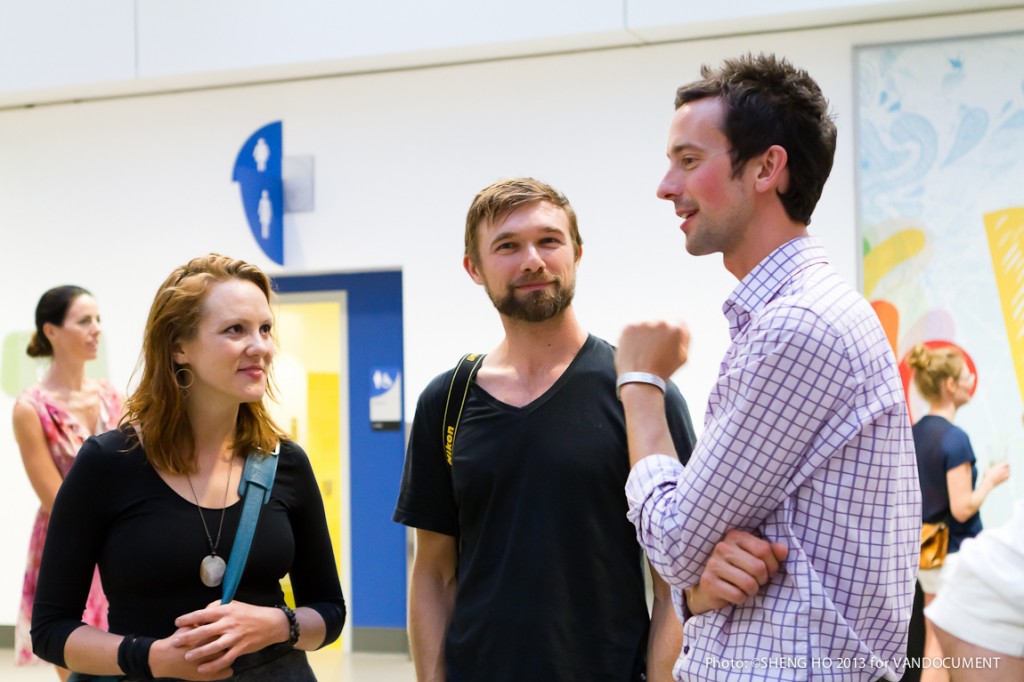 He speaks of the grotesque in the beautiful, “If you look at Edward Burtynsky’s photography, he’s shooting ruined landscapes: destroyed, toxic, but they’re beautiful,” and articulates that this juxtaposition features strongly in his own work. He didn’t set out to be combative in his activism, but rather to create an opportunity for the viewer to soften in response to something that is discarded as gross. To him, the beauty opens us up to our emotions.

“I’m borrowing aesthetics from cultural norms, maybe Edward Curtis and all these different costume references we used, in creating these beautiful organic versions of plastic to allow people in, so that once they are in they can be like, “Oh that’s kind of gross, a family sleeping in garbage,” Michael states. Edward Curtis was an ethnologist and photographer at the turn of the century who took photos of Native Americans in a staged manner. He added artifacts that were no longer in use, and was criticized for misrepresentation. Michael explains, “I am also creating a false culture of people, a culture that doesn’t exist yet, so it allows us to enter into a dialogue about what’s real.” 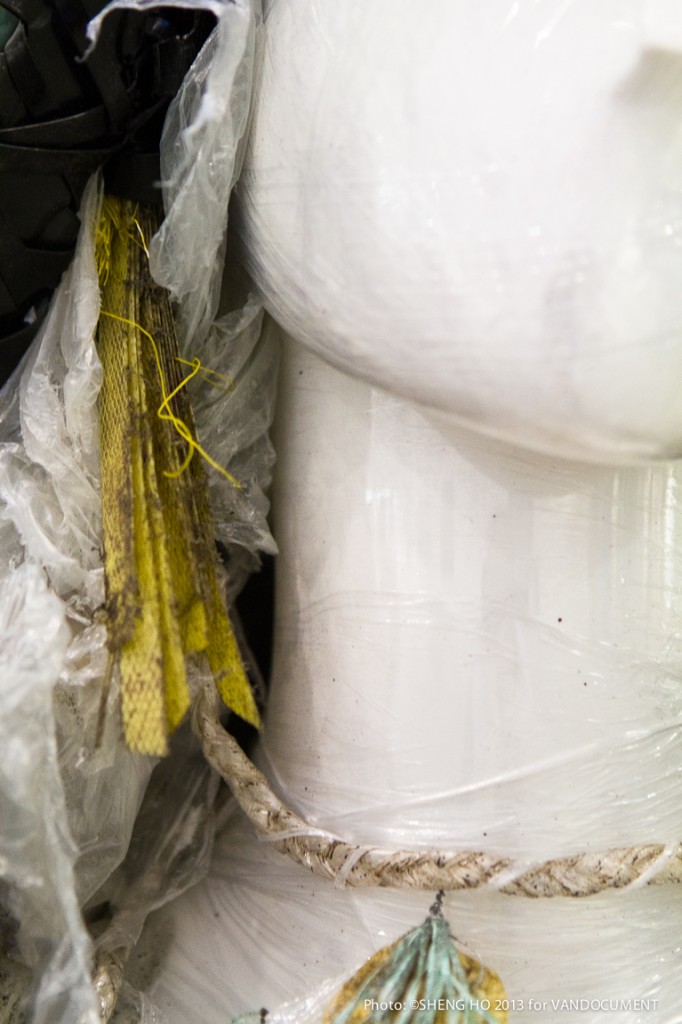 “I definitely wanted to bring in a multicultural reference, so when we were researching the costumes we certainly looked at First Nations, at Icelandic cultures, at Japanese cultures, we looked at Aztec cultures, because when we started this project we were trying to create a fictional people, a culture in the future that might have grown out of a sort of apocalypse or a deconstruction of society as we know it. We imagined a people from all cultures that we know right now trying to create meaning for themselves,” Michael explains.

While I can see the aesthetic inspiration he speaks of in the images, I feel lost in the reason these inspirations have been used. There is a significance here that could have opened doors into new meanings about the connection between environment and culture.

Ideas and aesthetics storm in my mind and I start thinking about addiction, idealization and obsession. Often when faced with environmental activist art, I wonder about how culture and social justice are involved. If we are addicted to a substance such as plastic and our addiction has led us so far into the abyss of self-denial that we create islands of waste, what else have we buried deep in our collective psyches? 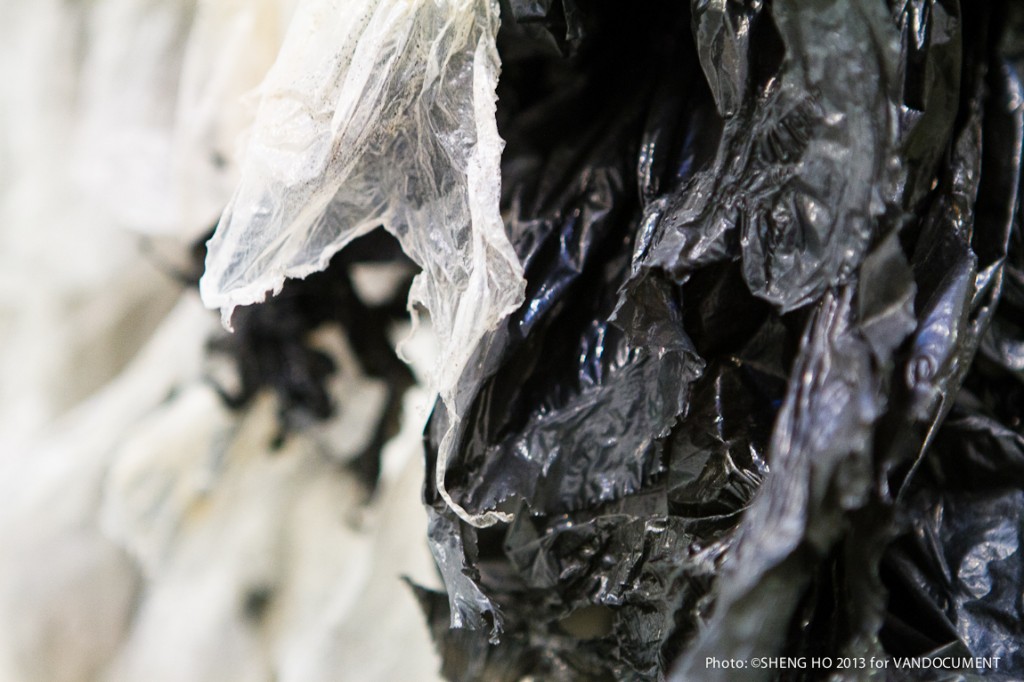 We are tangled up in using plastic to the point of obsession. In the time of Edward Curtis there was a mystique of the idyllic traditional culture, and it continues today. What is it about the myth of the pure, natural and original culture that continues to bind us to a moment in time that may never have existed (at least not in the way we suppose)? How can the essentialization of a way of being on the earth continue to hold us in suspense, suspended from the reality of real time, real adaptation, and real transformation? Hall’s images have the attitude of Mad Max, the quietude of Lord of the Rings elves, and the stoicism of Curtis’ long past ideas of First Nations.

What is ironic to me is that mystique is a double-edged sword. It draws us in, and frees our imagination to embrace the possibility of great transformation, but it also freezes me in a relationship with an ideal that cannot relate to a very real culture and people. In this scenario in particular, it is as though the image of this “primal” culture is being referenced without addressing our historical relationship with that idea. In particular, there is a legacy of cultural appropriation and continuing marginalization of First Nations people, not only here in Canada, but across the globe. If the legacy of plastics is global, we can’t ignore the reality that big oil continues to commit crimes upon aboriginal peoples across the world, such as stealing land, destroying subsistence ecosystems, and genocide in the name of profit. 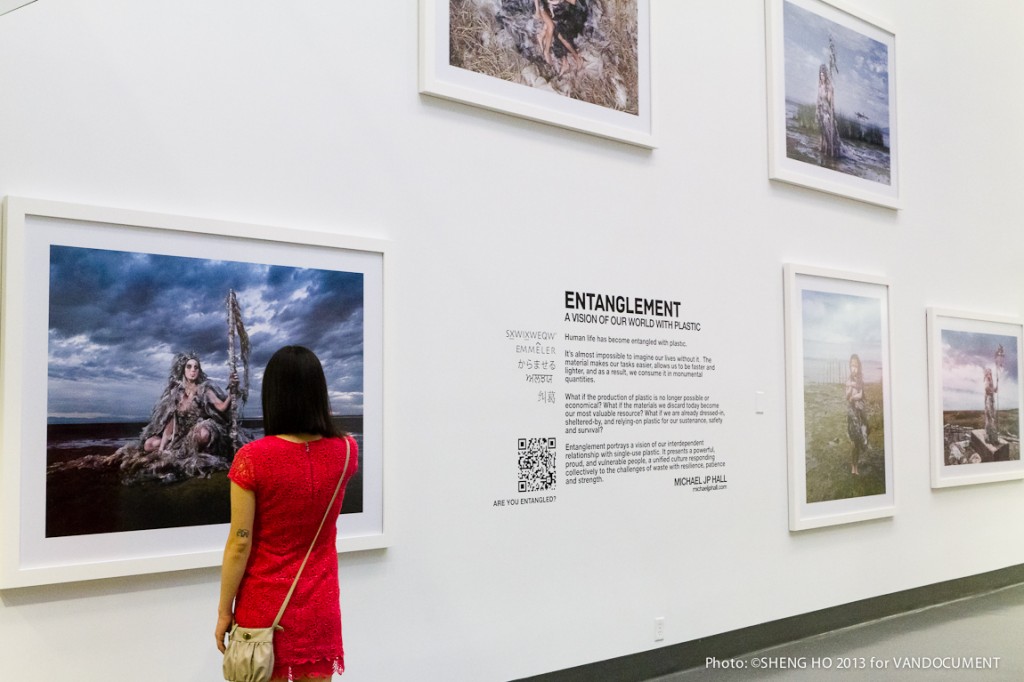 In terms of the use of images, there is a cultural biography of an object, and if this had been addressed more explicitly in regards to the use of headdress, bone necklace and staff, another level of the work could have been revealed. As it was, they were purely sensational, beautifully so, but lacking a depth that I longed for. The acknowledgment of how the particular cultural influences were referenced could have been opened up more for me.

At the end of the evening, I am left feeling at once inspired and wondering. Art emerges through experience, and if the process of revealing the artist’s vision is both beautiful and disturbing, politically problematic and fantastical, what matters is that it emerges and we engage with what its existence means right now. Entanglement took me into a dialogue with a number of people, and collective dirt was exposed in the process. We excavated this abyss together with the artist, not to find a solution, but rather to get a little closer to ourselves.

Entanglement: A Vision Of Our World With Plastic will be exhibited at Science World throughout the summer.

5% of the campaign proceeds will go towards local Surfrider Foundation’s Vancouver Chapter initiatives. Michael plans to tour this exhibit to other science centres, including Edmonton and Calgary. 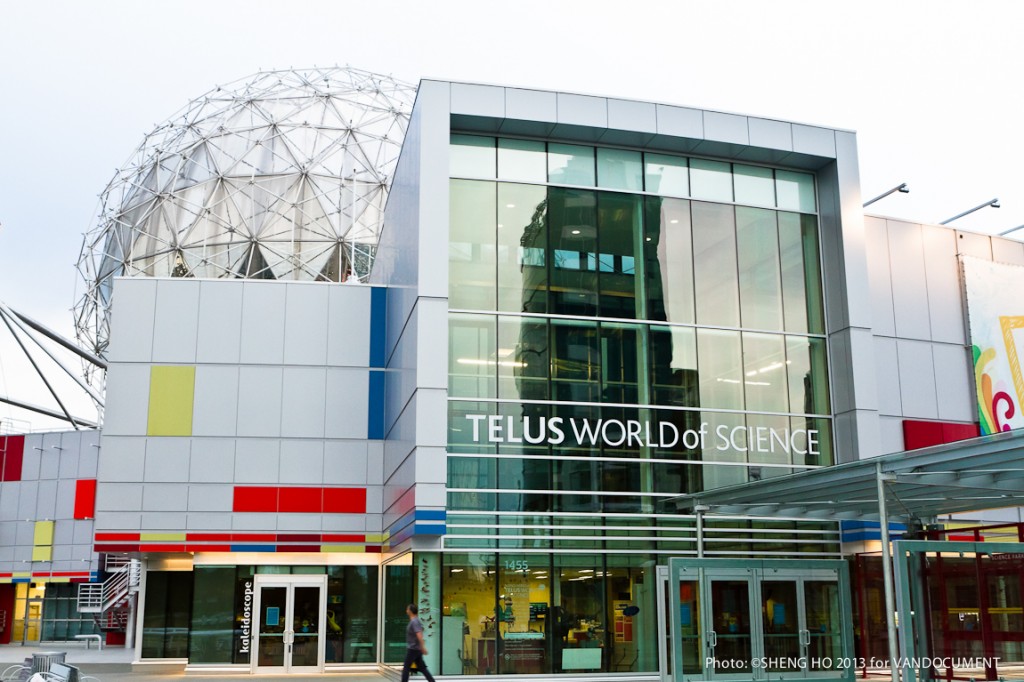 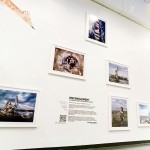 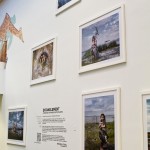 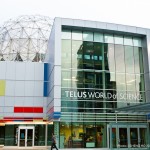 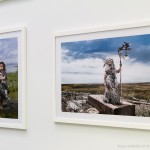 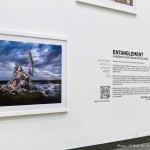 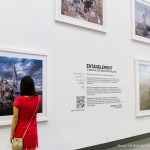 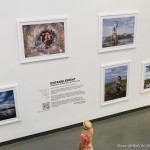 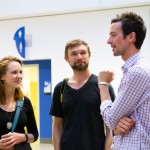 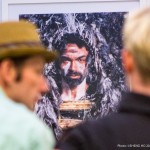 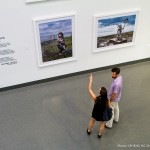 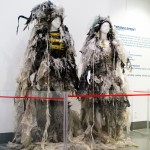 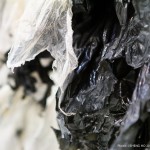 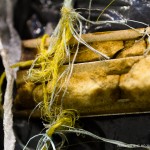 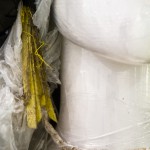 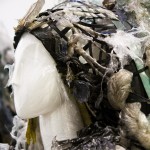 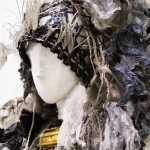 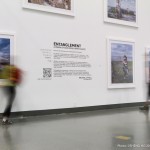 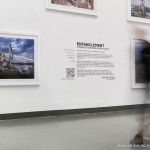 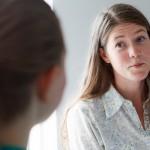