On an overcast afternoon in May, Hailey McCloskey and Ash Tanasiychuk of VANDOCUMENT headed to the soon-to-be destroyed green house at The Cultch to get a sneak preview of Safe/Guard and Feast.

This show, featuring two separate, yet curiously connected, original works, has been notoriously advertised with very little literal explanation. “A Visual Poem & Dinner Table Battle” is one of the headlines used as a description. Yet what does this mean, exactly?

Creator/performer/visual designer Robert Leveroos, dancer/performer Mirae Rosner, sound designer Elliot Vaughan and lighting designer Kyla Gardiner were determined that although we would be writing a preview/review and shooting accompanying photos, mystery and intrigue should remain.

Often it is an object, a memory, or an idea that initially prompts an artist to create. Other times they start with the last image they want the audience to see.

Safe/Guard had already been created, and seen: performed once at an art gallery (Gam Gallery) and once at a dance festival (Firehall Arts Centre). Robert approached Mirae to make a piece to be shown specifically with Safe/Guard. The Cultch’s Green House basement, perhaps due to Robert’s ongoing work with youth theatre groups in that space, perhaps due to an unexplainable connection to it’s history, became the catalyst from which Feast was born.

Robert and Mirae invested stories of grandmas, tents, bears, and dollhouses into the creation of Feast. Manipulation of materials and the limits with which one can manipulate were guides in gearing a process of thorough experimentation. This lead to a precise performance esthetic. And while there is no script and therefore no spoken words, the story is clear.

Without giving too much away, it is the intensity of dynamic movement, the unpredictability of pace, and the quickly-relatable personalities that emerge from deeply grooved storylines that are told, surprisingly, without a single spoken word.

Like being in an ancestor’s home, history permeates from the hardwood floors and ceilings. The atmosphere is thick with potential. No script. The lack of words: What might happen? When do we know it’s a story; how does it emerge?

What will be pulled from the chaos of not knowing how the story goes? How does this process lead to something clear, something like a story? The unknown path creates a landscape upon which a new story construction can be built. 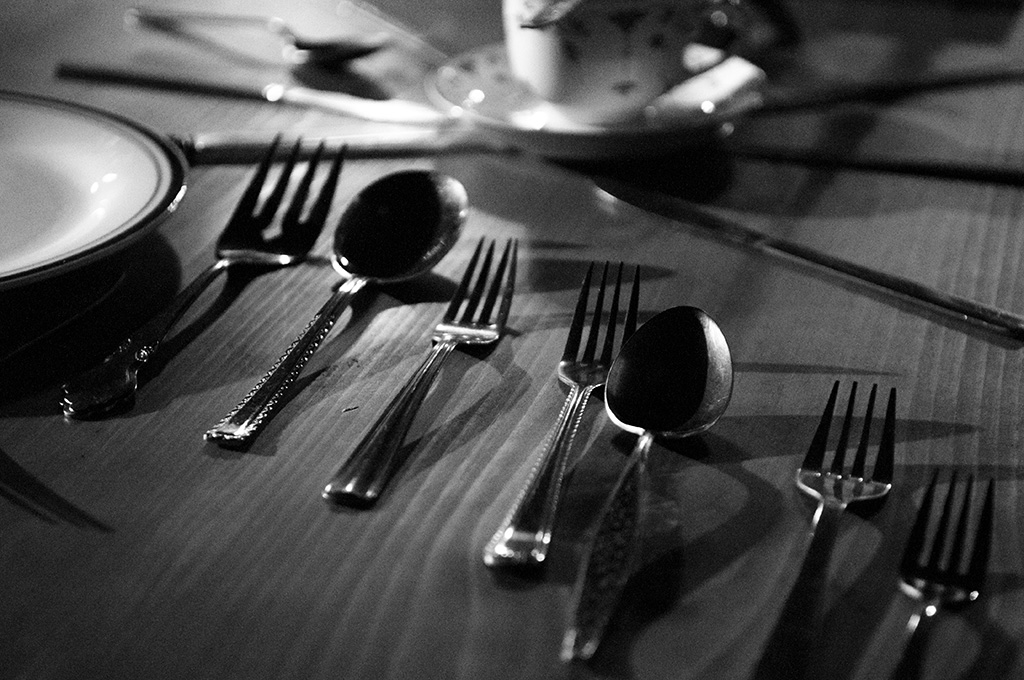 Stories of the artists’ lives enter this physical space that has a history of its own. The stories and histories mingle; clink glasses. They travel together on a journey with many objects that we all recognize. Are they simply plates and cutlery, or something more? 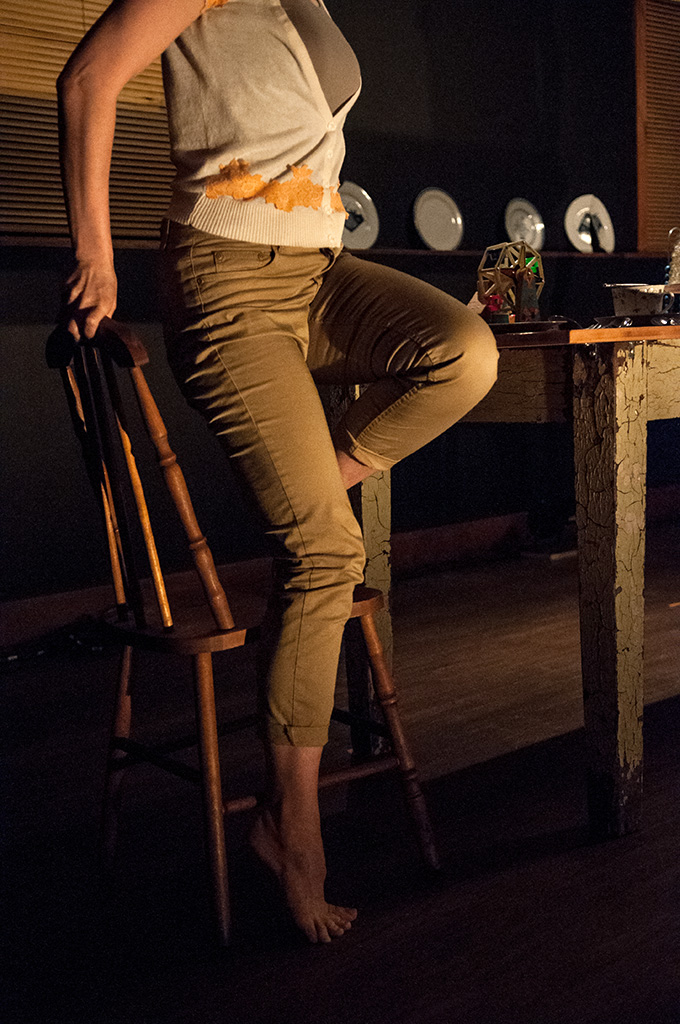 Competition, anticipation, affection, and light rivalry take the path of organization and poise. She steps into rebellion with grace. 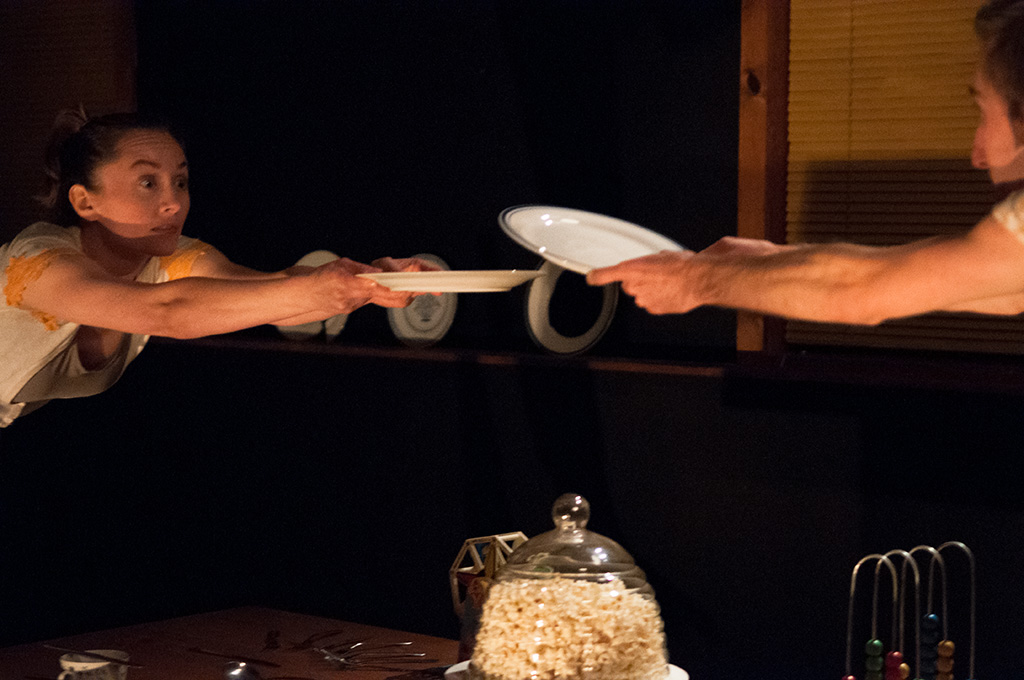 Have you ever had a secret wish to play with the tools of dinner ritual when at the family dinner table? Eagerness compels the rivals to go beyond their earthly powers, and they fly towards one another offering a gesture of sparring and camaraderie.

Hands are sometimes obscured by shadows. Feet underneath the table. Faces searing with expression, directed focus. His toes ALMOST displace the impeccable placement of the spoons. 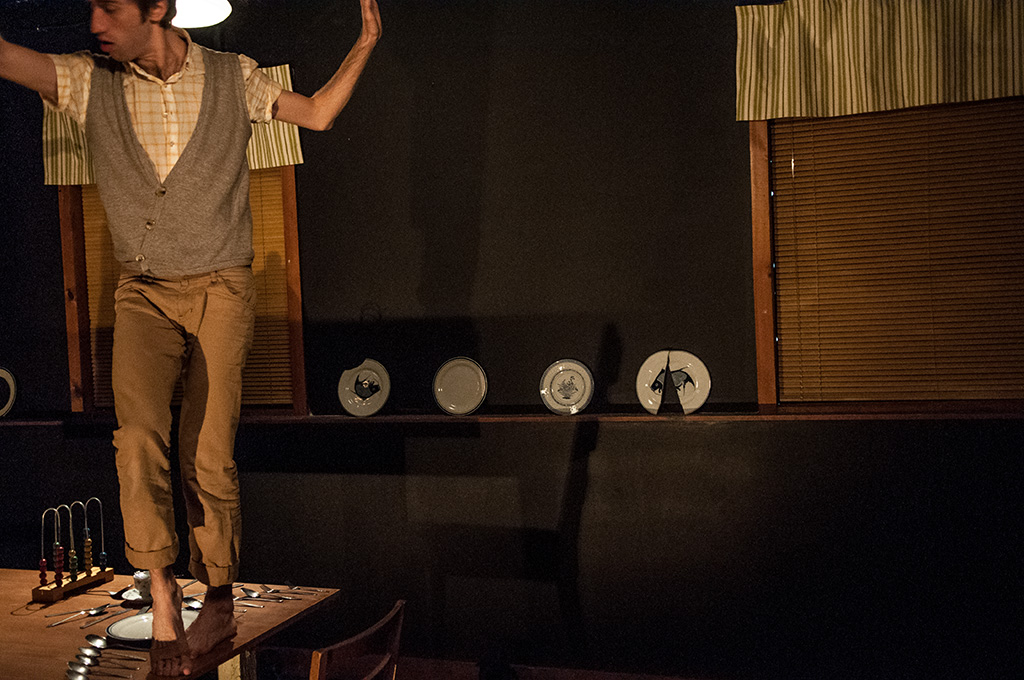 He ALMOST falls from his position. 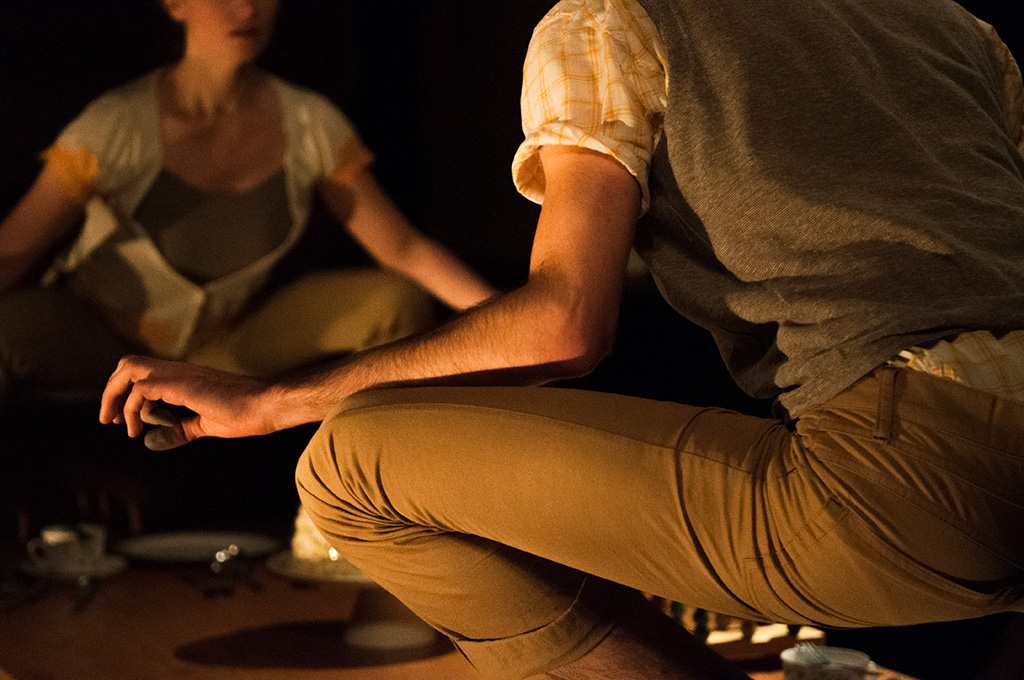 The dinner mates lock into a proverbial battle over the rules of the table: Cleanliness and arrangement.  The ways we repress.
What is stopping us from exploding: from excitement, rage, joy, frustration?

“who gets to eat first?”

“tear a strip off someone”

How do we reject ritual and at the same time grasp for its familiarity? What is the edge we can safely yet precariously teeter upon?  Isn’t it precisely the limits of familiarity that make play and rebellion so satisfying? 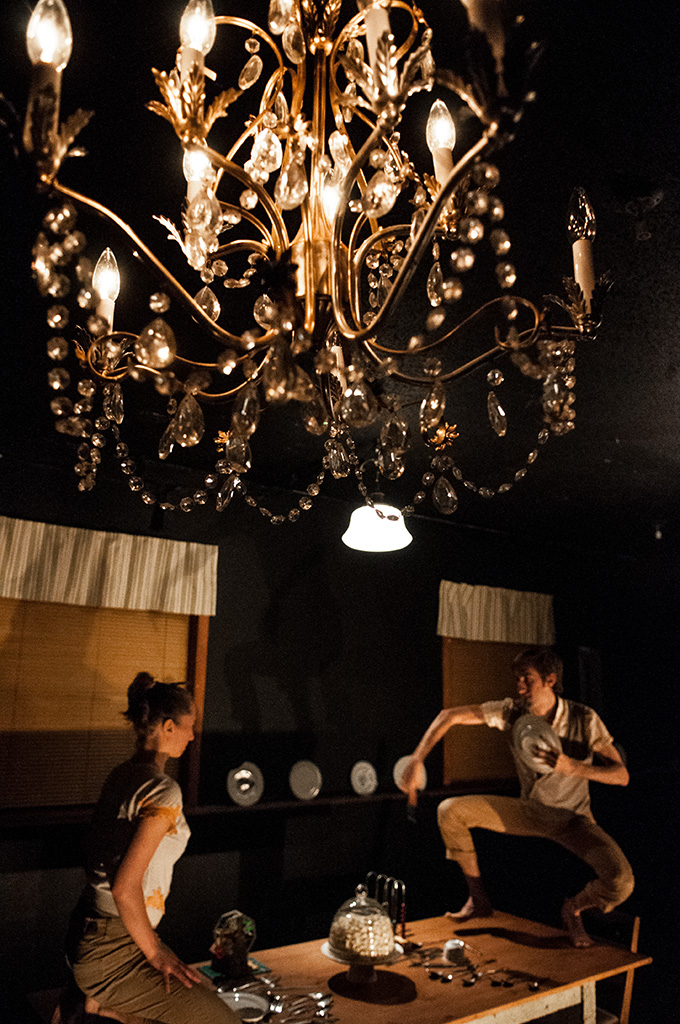 They catch the moment when those that uphold the rules of table (perhaps it is they, themselves that do this!) and let it fly!

Balance is nearly lost, regained, nearly lost again, precariously trying to not fall into a trap, the floor, losing focus from the food.

The family is as an island upon which one must balance, or rather find out how to balance with the need to get food, and the need to fulfill personal desires. 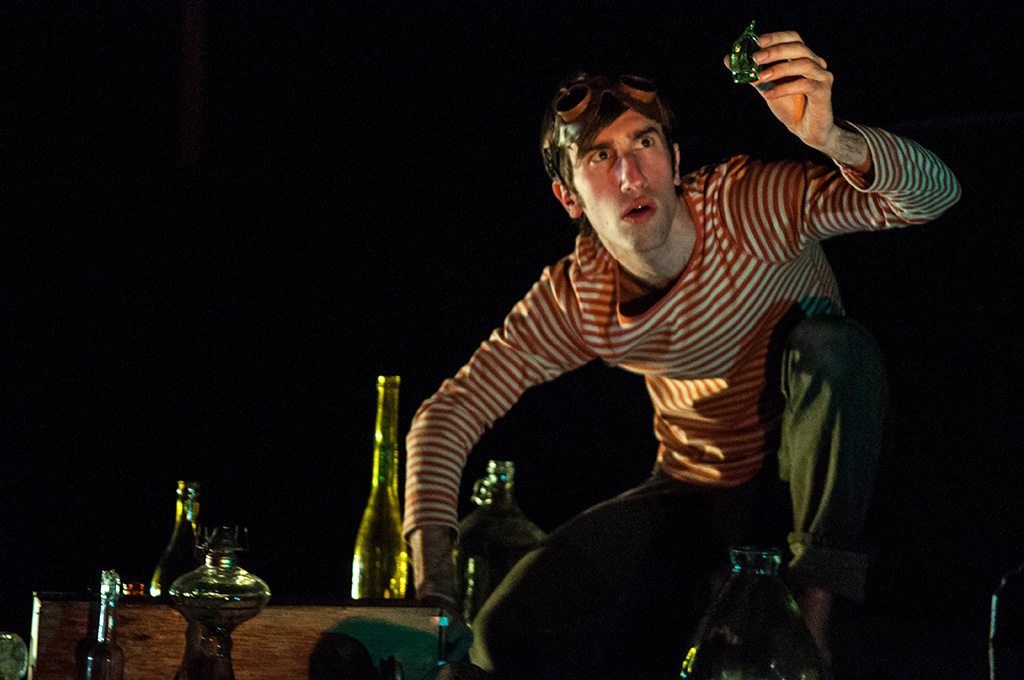 The scene is set: An alchemist (a mad scientist?). Bottles (why bottles?). Glass, water – elements for what? Lab experiment? Apocalypse? How do we create and destroy, then create again? 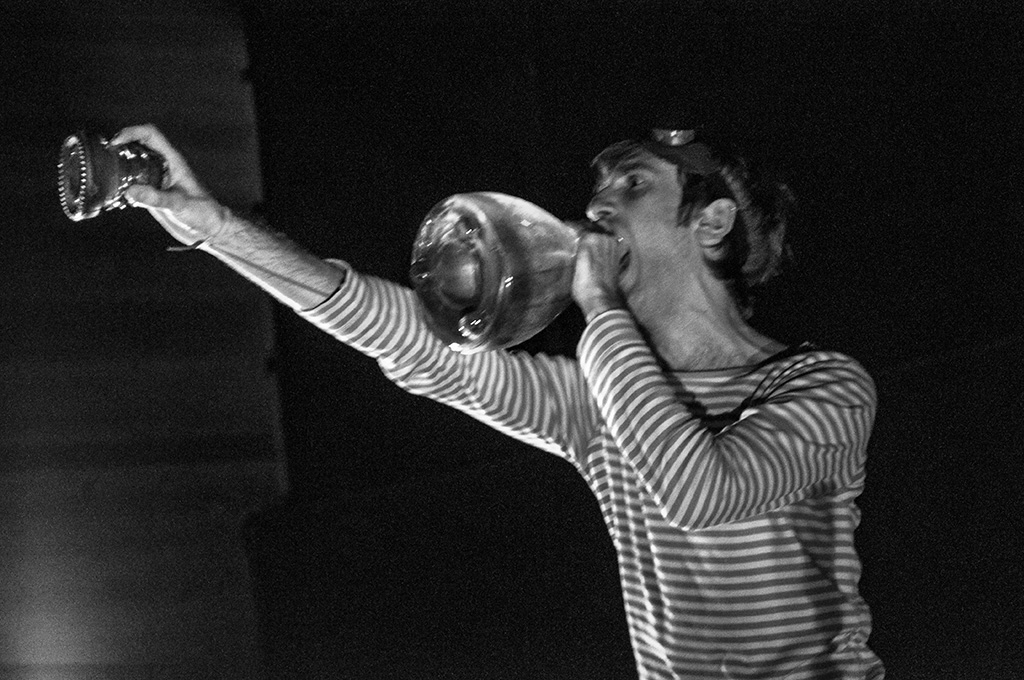 A call.  A foghorn.  For whom does the foghorn call? Who does it warn, when the potions have been stirred, and the mixing of substances has been completed?
Is this a lighthouse upon the shore of oblivion? The storm may be forming and the attendant calls into the darkness. 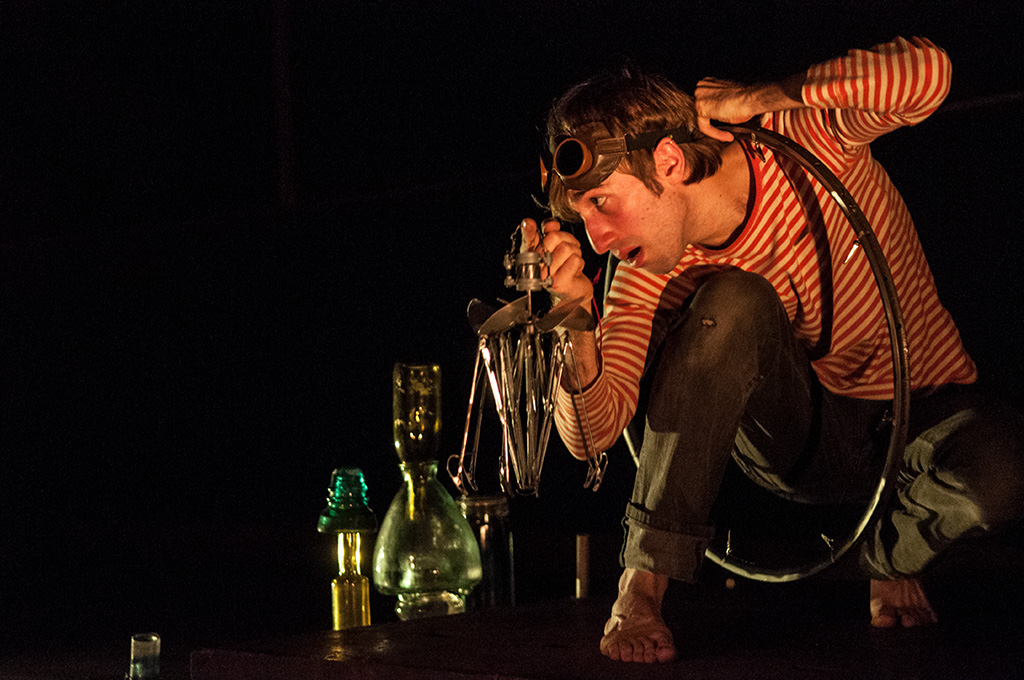 The spider mediates the mechanic’s actions.  He places himself in the center of this construction, and repurposes the creature.

The chants are chanted and the score builds.  The paces made on the wood island at the center of the magician’s world are taken with precision and a perky creativity.

A dangerous ingredient to obtain.  The machinist struggles animalistically. 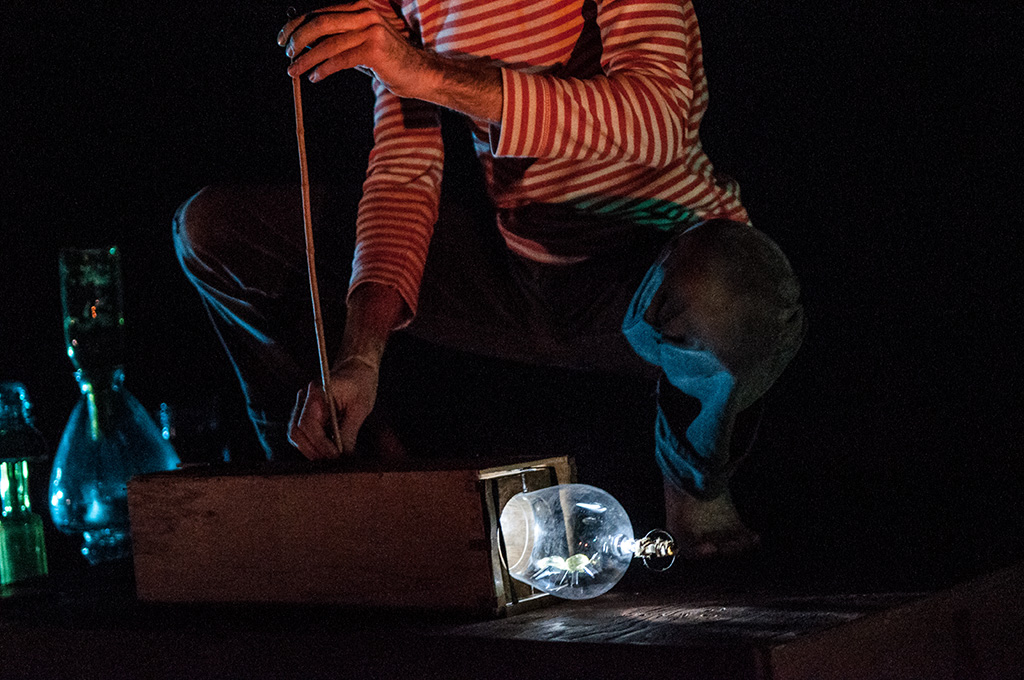 A light in the dark, a small organism shows the alchemist the next step. Like the voice of a Burroughs (burrowing)-inspired creature, he hears and proceeds involuntarily…

The magician reveals his secret stash.  It holds not only ingredients, but a window into the mind of his creation.

He is poised and precise, yet wildness begins to animate his actions with an abandon unforeseen in these parts.

The magician celebrates the completion of the building phase.  He is on the precipice of unleashing the proverbial beast.  As above, so below – his alchemy stands tested and true.

This is far from over, many tensions have built, and must be released…

Safe/Guard and Feast premieres Tues May 21 at Upintheair Theatre’s rEvolver Festival at The Cultch in East Vancouver (1895 Venables St) and runs every night through till Sunday May 26. Tickets are $14 and are available here: https://tickets.thecultch.com/

* VANDOCUMENT’s Ash & Hailey would like to thank Robert Leveroos, Mirae Rosner, Kyla Gardiner, and Elliot Vaughen for presenting your work to us and being generous and open in our pre- and post-performance Q&A’s. Safe/Guard and Feast are full of energy, surprise, and humour and it was a joy to experience both performances. We wish you all the best during every night you show.

2 Responses to Safe/Guard and Feast: Mystery and Intrigue at the rEvolver Festival

The Lady is a Tramp: Klasika by Barbara Adler