Review and interview by Drew Copeland

On its surface, Eurydice is catchy and engaging, verging on farcical; pausing for deeper consideration, more significant aspects arise from the tragic foundations. The play is both immediately entertaining and enjoyable like Count Chocula, but also offers some gristle upon which to chew in quiet reflection.

This popular Greek myth has been reiterated through the ages, and for good reason as its retellings continue to bear fruit for progressive generations.

As director Keltie Forsyth considers, Eurydice is an important production for young people who are discovering the meaning of relationships, love and of the reality of sexual violence. 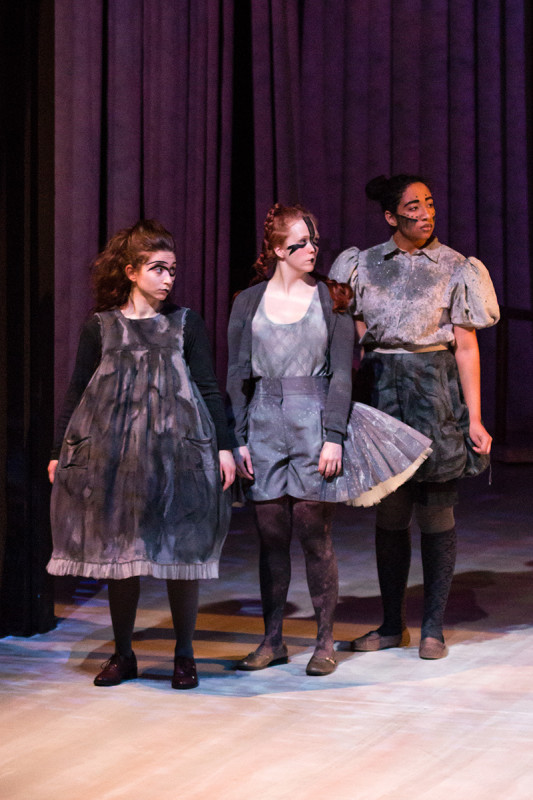 Thursday, January 21 was the opening night of the play at UBC’s Frederic Wood Theatre. The enthusiastic audience was a blend of young and old. They unabashedly shared out loud in the many humorous aspects of the play, but also held quiet during the weightier moments.

For those of you not familiar with the Greek tragedy, Orpheus and Eurydice, the quick synopsis is: Orpheus and Eurydice are in love. They marry, but Aristaeus the shepherd wants Eurydice and chases her. While fleeing, Eurydice steps in a snake nest, is bitten and ends up in the underworld. Orpheus manages to reach Eurydice in the underworld. The pair is leaving when Orpheus looks back at Eurydice—an action forbidden by Hades, Lord of the Underworld—thereby returning Eurydice below and permanently separating the pair. 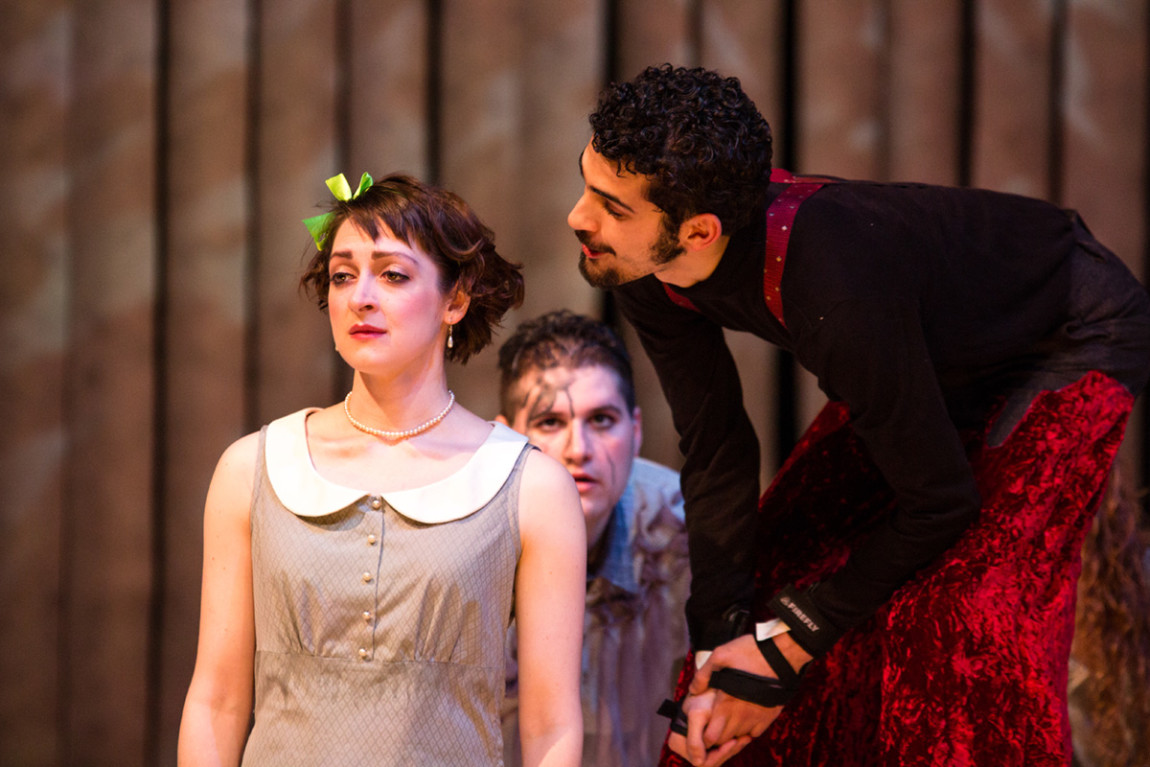 In 2003, American playwright Sarah Ruhl recreated this story from the perspective of Eurydice; the previous version was read from Orpheus’ point of view. Ruhl cast the story with a new vision and hundreds of performances followed. This year, there are 24 productions across Canada and the US.

In Ruhl’s script, Eurydice encounters her father in the underworld, an addition which brings a new layer of meaning to Eurydice’s circumstances and actions. As well, the Lord of the Underworld—previously Hades—is replaced by a nefarious child.

Ruhl’s changes brought an element of lightness to the play—something that intrigues Forsyth. Forsyth posits that the play is best approached with whimsy and quirky humour, which set it apart from the tragedy genre.

Forsyth’s major change is the addition of six additional members of the cast, who don’t have any lines, but who bring the music, energy and context on to the stage. They play a series of percussion instruments and add sound effects which truly serve to liven and lift the production. 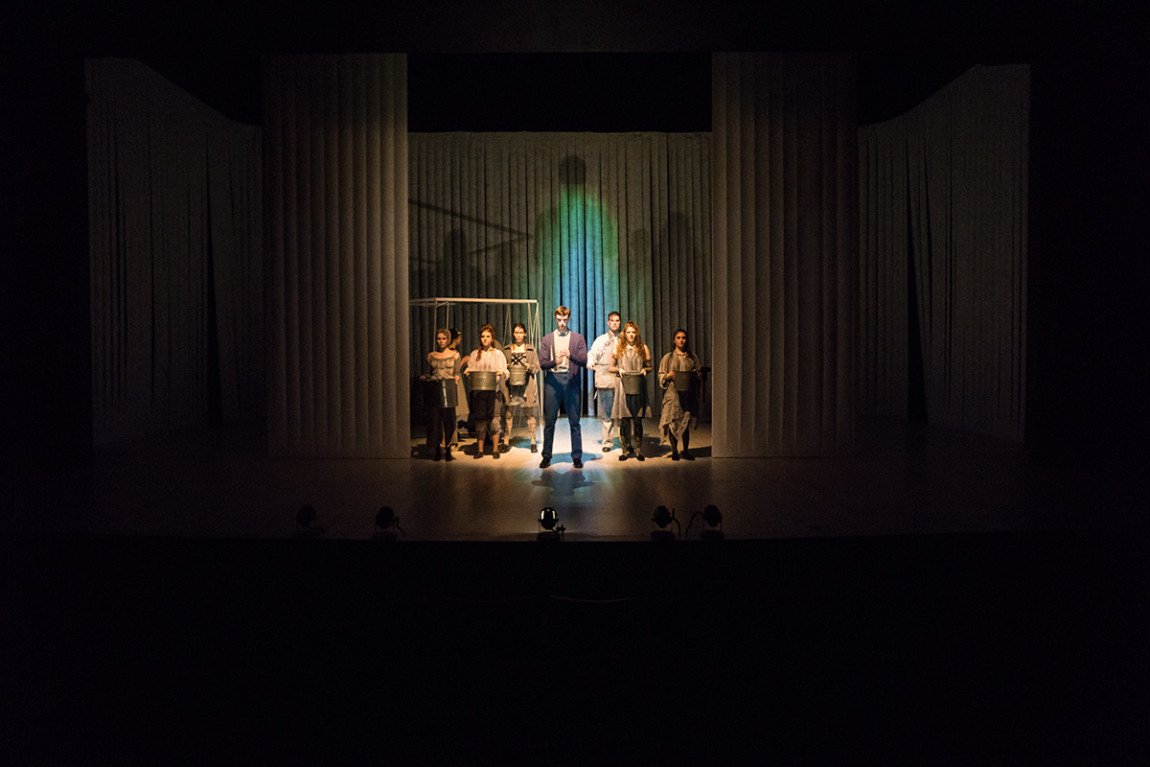 Forsyth grew up around theatre. Her mother and father met at the National Theatre School of Canada and Forsyth has been on sets since infancy. For Forsyth, the production of Eurydice is the major component in her MFA.

Forsyth was kind enough to answer a few questions about the production.

Why did you opt for this production?

It’s a great play for the student to do. It’s really about a lot of themes that are relevant when you are the ages that they are, in your twenties. And it’s a play about things you feel when you are young and you are learning about what the hell love is anyway. I thought that the themes of this play would have a little more relevance for those young students and they would be able to bring a little more to it that way.

How is it relevant for Vancouverites?

I can tell you why it’s relevant on campus right now and hopefully that is meaningful to Vancouver. You know this play is really about a young person who is in love in an idealistic and naïve way—as we are when we’re in love at 18 or 19—who learned to love more selflessly, who learned to love in a way that’s not about what you get from your partner. I think that’s relevant to all of humanity. It’s something we could all do a little more of. Particularly the students who are in that age range, this is something they’re going through in their lives, right now: what does it mean to be an adult human being in a loving relationship, whether it’s parental love or romantic love relationship?

What about the theme of sexual violence?

It’s such a loud conversation in our culture right now: about gender politics and sexual violence. It’s timely. In a Freudian sense, she [Eurydice] sits inside the triangle of father, lover and innocent husband. It’s really about the byplays between the guy who’s really good in bed, the guy who’s really good for you and your dad—which is a little creepy when you think about it like that.

Eurydice dies because of the threat of sexual violence. Then, she looks at the [Lord of the Underworld] down in the underworld. It’s funny, but it’s really fucking creepy too. She looks at Orpheus and he’s a man, he’s grown up while she’s been dead.

She’s afraid of everything that means. It’s not overt in the play, but she dies a virgin, in a sort of old fashioned way. All of her experiences with sex have been naïve questions of love with Orpheus or violent sexuality that the Nasty/Interesting man [the suitor who chases her to the underworld] and the Lord of the Underworld bring. In a wildly intellectual way, fear of sexual violence is the fear that holds her back. That’s not something that I would expect the audience would pick up while watching the show; it’s something I hope they would pick up a couple of days later. It’s subtle, but I think it is there. In terms of conversations about the gender politic and ownership of women’s bodies and rape on campus as a sort of ongoing theme—and especially at UBC this year as it turned out—it feels topical, it’s a conversation we’re having right now.

Eurydice is playing daily at the Frederic Wood Theatre through February 6. Tickets can be found here