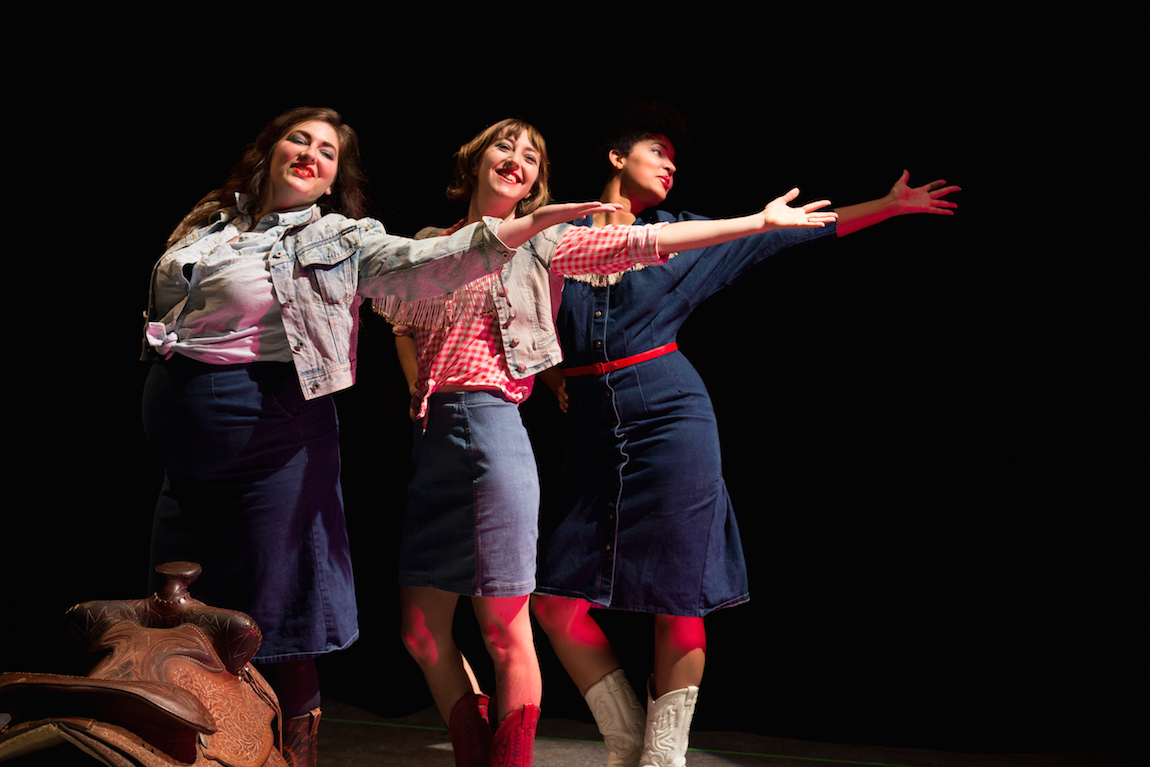 In the summer of 2015 I went to the Czech Republic to learn about the unique sub-culture of Czech tramping. I’ve told a lot of stories about my attempts to adapt elements of Czech tramping to a Canadian context; many of these efforts have been detailed here (and here and here) on VANDOCUMENT. In sharing this research, I’ve been asked many times: what does this all add up to?

Well, it adds up to a show. Premiering this Thursday, Klasika is a musical theatre reimagining of the true story of how I went to the Czech Republic to find tramps, and accidentally ended up co-starring in Amerika, a staged documentary film about Czech tramping. Klasika is a mix of documentary ‘fact’ and extravagantly fictitious fiction. A character who shares the Czech version of my name—‘Bara’—sets out to look for Czech tramps. She ends up meeting ‘Barb’, a boot-fitter working in the same small-town American feed store that sold me my cowboy boots. Over the course of the show, we discover that Barb is the leader of a glittery pack of rodeo queens who sing, dance and support each other in high-haired friendship.

I asked SFU professor Peter Dickinson to interview Klasika performer Ashley Aron about her role as Barb the Boot-fitter. Peter is the Director of SFU’s Institute for Performance Studies as well as the author of an excellent blog of commentary and reviews of performance works presented in Vancouver. We were curious to hear Ashley’s thoughts on ideas of radical femininity, the power of friendship and rhinestone-studded costumes that are wrapped up in the character of Barb and her rodeo queen family. Read on for a lively, incisive dialogue that sheds light on another aspect of the behind-the-scenes work of Klasika as it comes to life through character and costume… PETER DICKINSON: What has been your process finding your character so far? To what extent has costuming helped (or do you think it will help, if you’re not at that stage yet)? To quote Barb, how have you change/fixed/edited what you’ve been given to work with and made “it fit your stride”?

ASHLEY ARON: Well, this rehearsal process is quick n’ dirty (somewhat delightfully so) and I’ve found there has been little time to really dig into character explorations like there will be when we get to Broadway and we have all the time in the world, as Kyla professes. For me, that’s been ok because Barb has come to me fairly naturally. I get to rely on my inherent queenliness (Barb is not the first queen I’ve been asked to play), and also my razor sharp attitude for this role. Costume has certainly been very helpful. I’ve traded my movement clothes for stiff denim jackets and boots every rehearsal and I’m finding that it helps me define my character because, lord knows, Barb wouldn’t be caught dead in Lululemon. 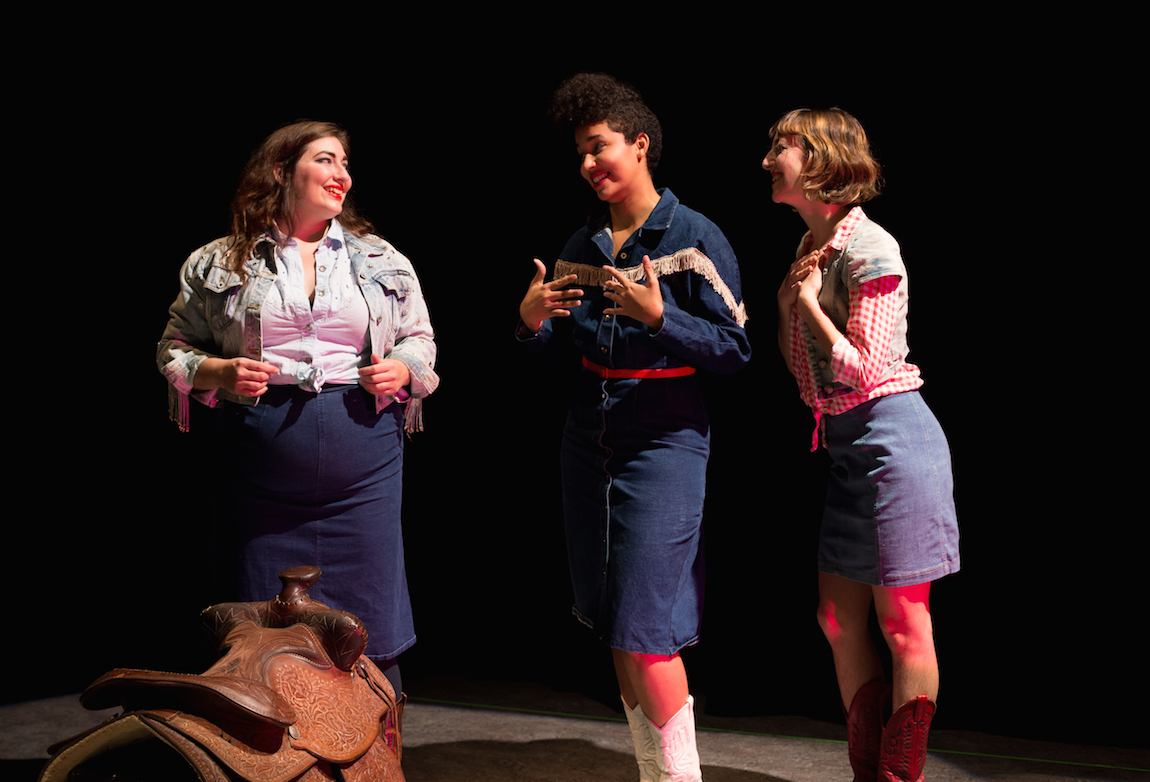 PD: I’m interested in building on costume a bit in terms of a discussion of the different performances of gender at work in the musical. On the one hand, the Czech tradition of tramping would seem to be partly parodying an iconic (North American) representation of masculinity. And yet the cowboy figure also seems to be held up as a revered outsider, an anti-authoritarian symbol.

Do you see something similar going on with Barb, Sherri and the Whippersnapper? The big hair, bedazzled jeans, and boots that Barb sings of in “Queen of the Cloverdale Rodeo” certainly scream a certain kind of (stereotypical) hyper-femininity (and I lived through the era she’s singing about). And yet I don’t read it as camp. Indeed, it reads more like a feminist mantra. How do the Rodeo Queens find agency in rhinestones, beads, and leather?

As women performers, what does it mean to incarnate such a character on stage? Is it liberating? Or are you also conscious of soliciting a certain sexualized gaze?

AA: The Rodeo Queens are no quietly feminine crew, that’s for sure. While there is a certain set of values they live by, there’s nobody walkin’ all over them. I think the set of lyrics that resonates with me the most is in the song, “Queen of the Cloverdale Rodeo,” where Barb proclaims: “You could buy in/ or you could hate what you’ve been given/ but take it on the sly/ change it/ edit/ make it fit your stride.”

As a queer femme, my personal relationship to femininity is a contentious one. The limits of stereotypical femininity can be suffocating and oppressive, and yet, I find great power and strength in performing hyper-femininity. I (much like the rodeo queens in the script) delight in the textures, structures, and colours that go along with feminine gender presentations. I also love the game of taking the parts that I want and chucking the rest behind me like an old shoe. I think the boundary between “buying in” and consciously performing femininity in an anti-authoritarian manner is extremely tenuous, and sometimes, in fact, there is no line at all. For me, honouring the feminine in its myriad expressions is always liberating, especially when we see it honoured on stage. I don’t think disavowal of femininity is a feminist act, and as a woman performer (or as a person performing woman-ness), I am asked to reject the feminine all the time and I’m pretty sick of it. I am always conscious of a sexualized gaze because it is always there, whether I am “soliciting” it or not. But I’m pretty ok with soliciting it also. 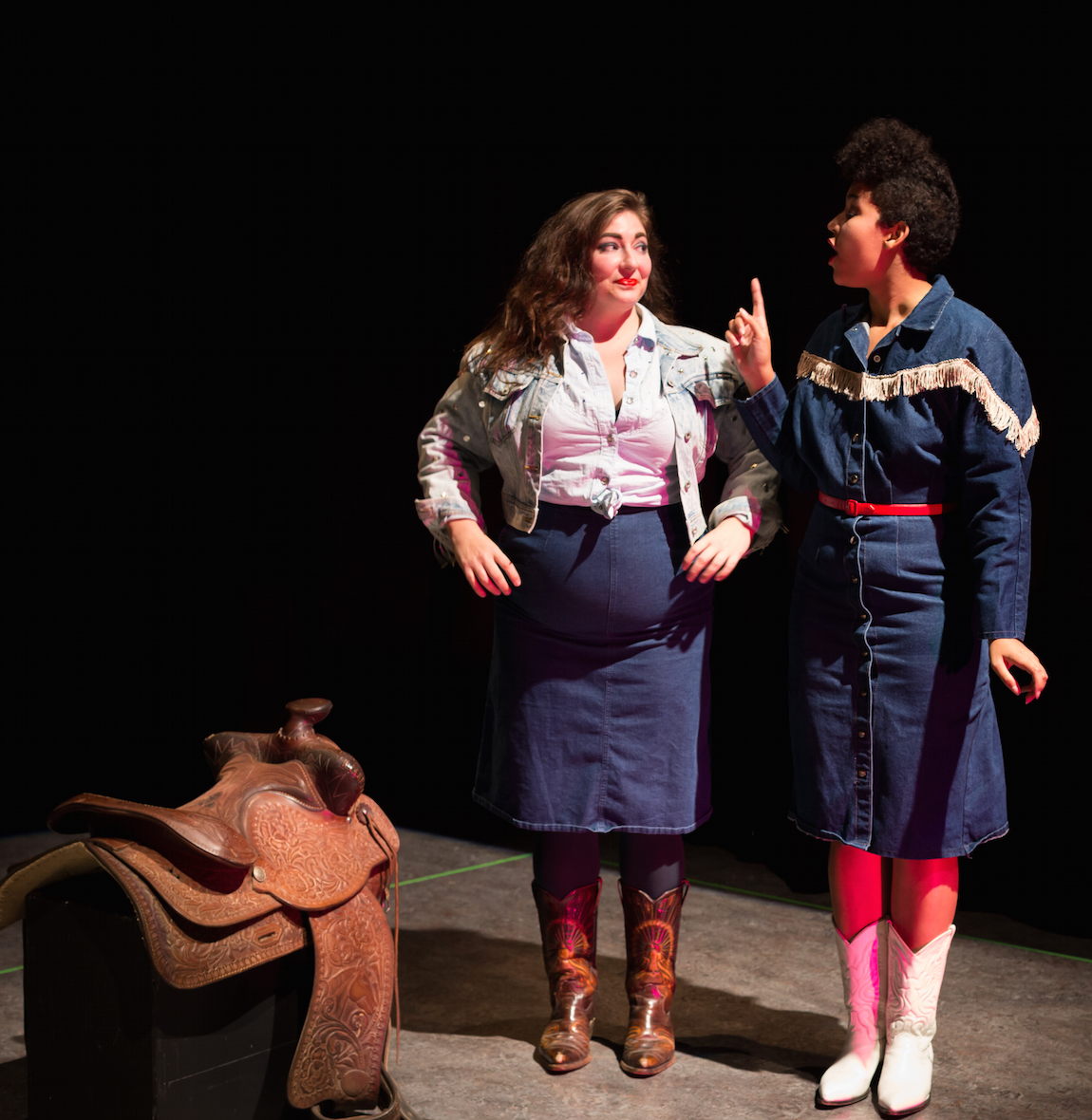 PD: What does the sisterhood of the Rodeo Queens represent to Bara? What do they give her/teach her that Honza, for instance, cannot?

AA: The Rodeo Queens represent friendship, chosen family, and mutual support. Honza is a real piece of work. His key interests seem to be supporting himself, taking what he wants when he wants, and using the stories of others to build his own success. Ick. These traits are fundamentally in opposition to the family of Rodeo Queens, even though a spirit of competition is inherently built into their relationships. The queens find ways to impart the wisdom of storytelling, humour, love, and the beauty of faking it till you make it. There seems to be some kind of trust in self that the rodeo queens display, whereas Honza’s version is riddled with ego and macho control. The notion of us all being in this weird thing together is crucial, and Honza is out to get his. As the queens say, “Rhinestones don’t work unless you give them company.” PD: In the boot-fitting scene, from what place of life experience/wisdom is Barb singing to Bara of leather stretching and skin getting tough?

AA: Oh, I think Barb has been put through the ringer at this point in her life. You have to go through the hard stuff to get to any kind of comfort, which you “should be able to imagine somewhere on the horizon.” Barb knows herself as an imposter and has been treated as one, and she knows Bara is off to experience some of that feeling for herself. It’s taken Barb a while to acclimate to the life of Rodeo Queen and I imagine that experience to have been painful and full of failure and rejection. But I think she wants us all to know that if we cowgirl up, the leather will stretch and eventually the boot will form to fit us. 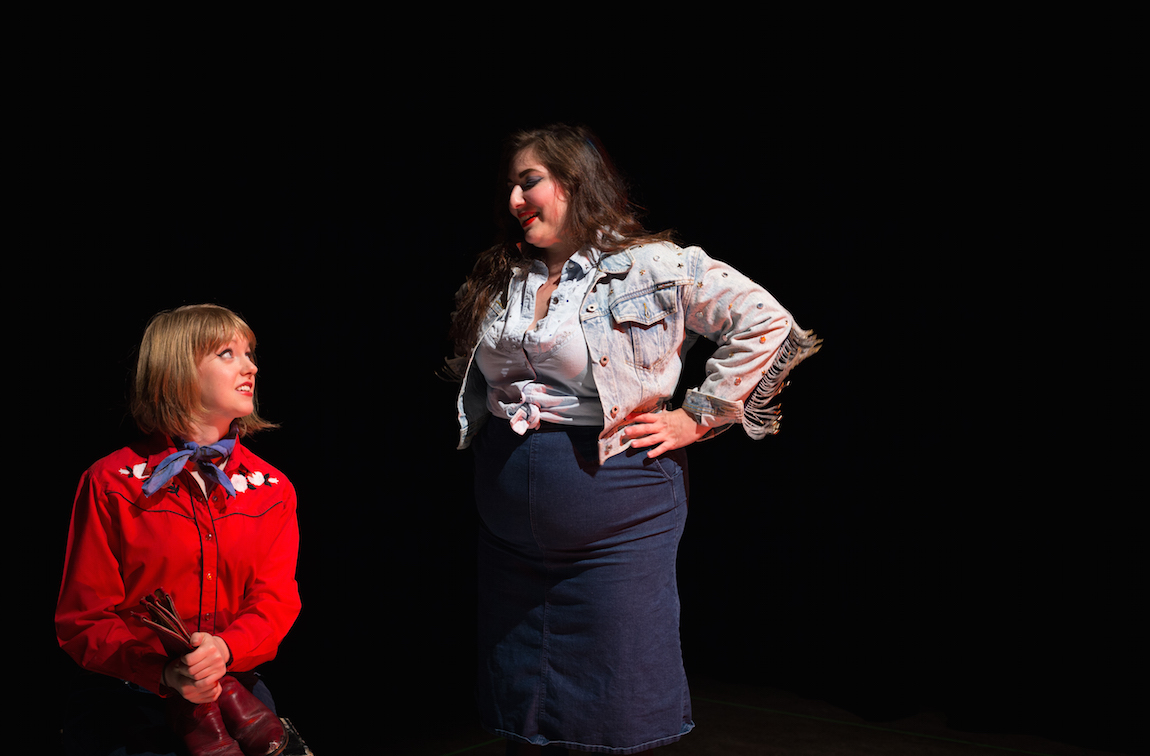 PD: What does Bara fear in looking too much like a “rodeo queen”?

AA: I think Bara is afraid of not being taken seriously in a community that reveres masculinity and is heavily dominated by men. Her resistance to looking like a rodeo queen may also stem from some of her own internalized misogyny that tells her that she can’t be smart, practical, or resourceful and glamorous at the same time. I think we’re all pretty familiar with the message that these qualities are mutually exclusive and antithetical.

Catch Ashley and the Rodeo Queens of Klasika October 29-30 at SFU’s Fei and Milton Wong Experimental Theatre. Costumes are encouraged, and both performances are followed by a dance party, featuring The Johnny Horton Remix. Buy tickets here.

Sawdust Collector is Kicking Up Some Seriously Cool Stuff

Blisters are the way the leather says ‘I love you’