A highlights reel of the 2015 Vancouver Queer Film Festival

Who ever said nothing happens in August? Amidst this month’s busy schedule of the International Symposium on Electronic Art and all sorts of art openings, comedy shows, and concerts, the 27th Vancouver Queer Film Festival kicked off last Thursday August 13th and continues until Sunday August 23rd for an 11-day odyssey of local and international queer film. And of course the festival boasts events, such as galas, interviews and workshops with visiting filmmakers, roller derby demonstrations, and dance and drag performances by local stars. 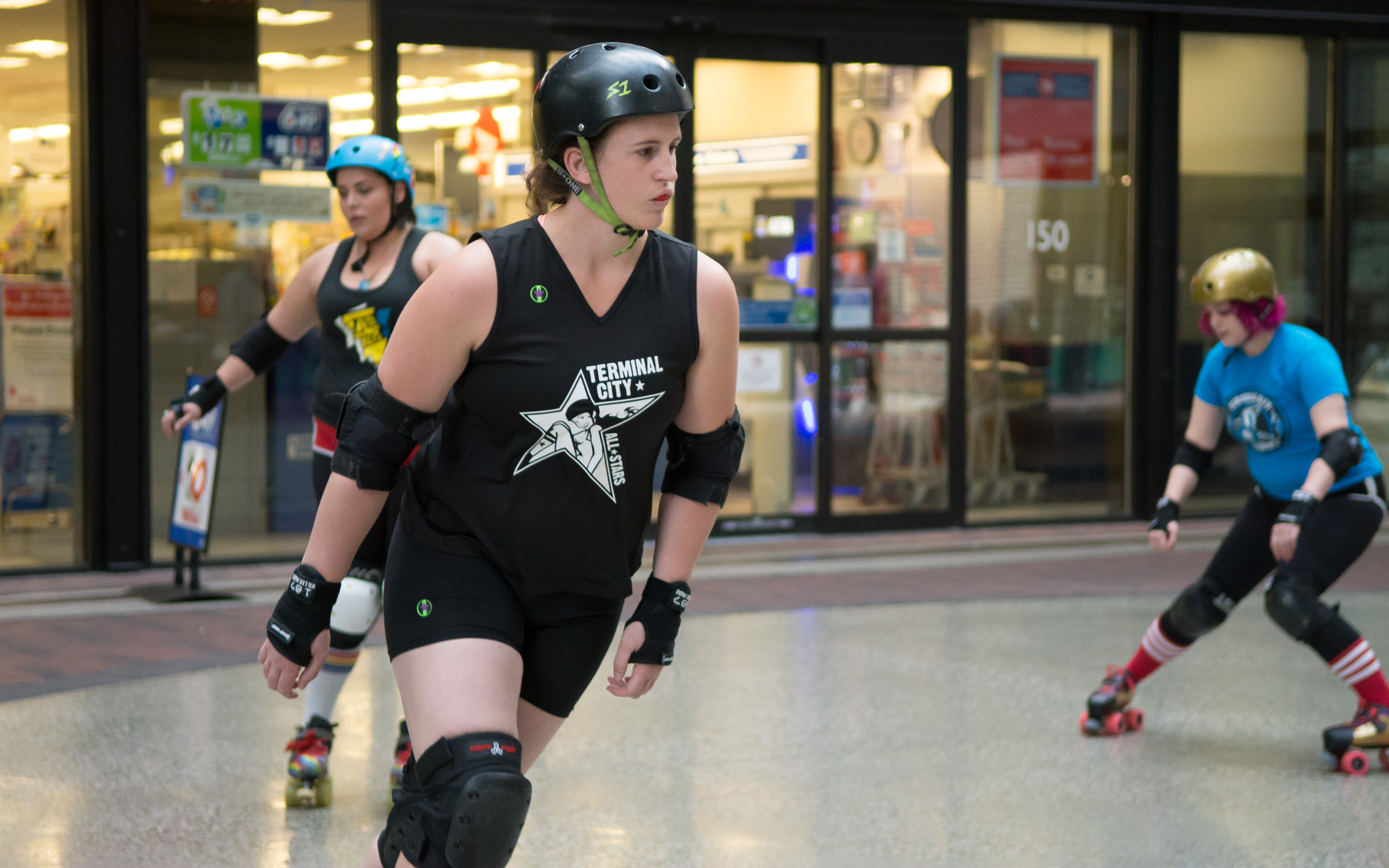 Vandocument presents highlights of the festival! Here’s the scoop on what’s happened so far and some film recommendations to check out.

The festival opened at the Vancouver Playhouse with Peter Greenaway’s Eisenstein in Guanajuato, an eccentric choice to begin the festivities—the film celebrates the queer awakening of one of the twentieth-century’s most important film figures, Soviet director Sergei Eisenstein. The film is Greenaway’s take on teaching cinema history, a lesson conveyed with carnal delight, lyrical philosophizing, lush backdrops, and dizzy cinematography. 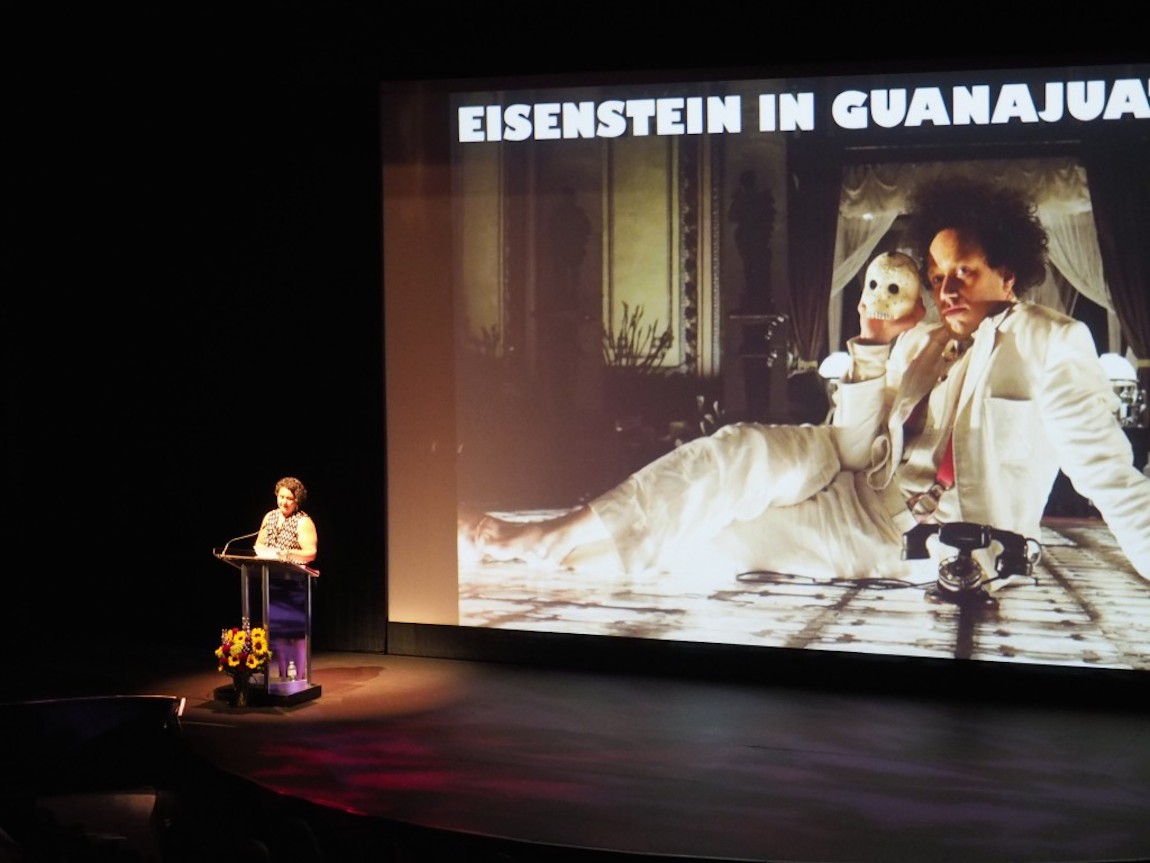 The film is also a scholarly foray into the archives, passionately stuffed to the brim with research. Greenaway adds archival photos and footage of Eisenstein and the artists and cultural elite of the early twentieth century, often splitting the screen into three panels to accommodate the historical material. Bäck winds up acting alongside photos of the actual Eisenstein, furthering the film’s goal of playfully conversing with history.

The focus on a fixed and pivotal portion of Eisenstein’s life distinguishes the film from the typical biopic that attempts to narrate an entire biography and imbue it bluntly with overarching themes. In contrast, Greenaway majestically zooms in on Eisenstein’s personal revolution, setting the trip up as “Ten days that shook Sergei Eisenstein” in homage to the director’s film on the Russian Revolution, October (Ten Days that Shock the World). The intensity of this one private episode allows Greenaway to illuminate Eisenstein’s life without overdetermining it. It’s a frisky engagement where Greenaway gestures to Eisenstein’s own filmic techniques of montage and juxtaposition and recreates the Odessa steps sequence. With his own painterly style, Greenaway executes an exuberant and queer vision of his film idol. 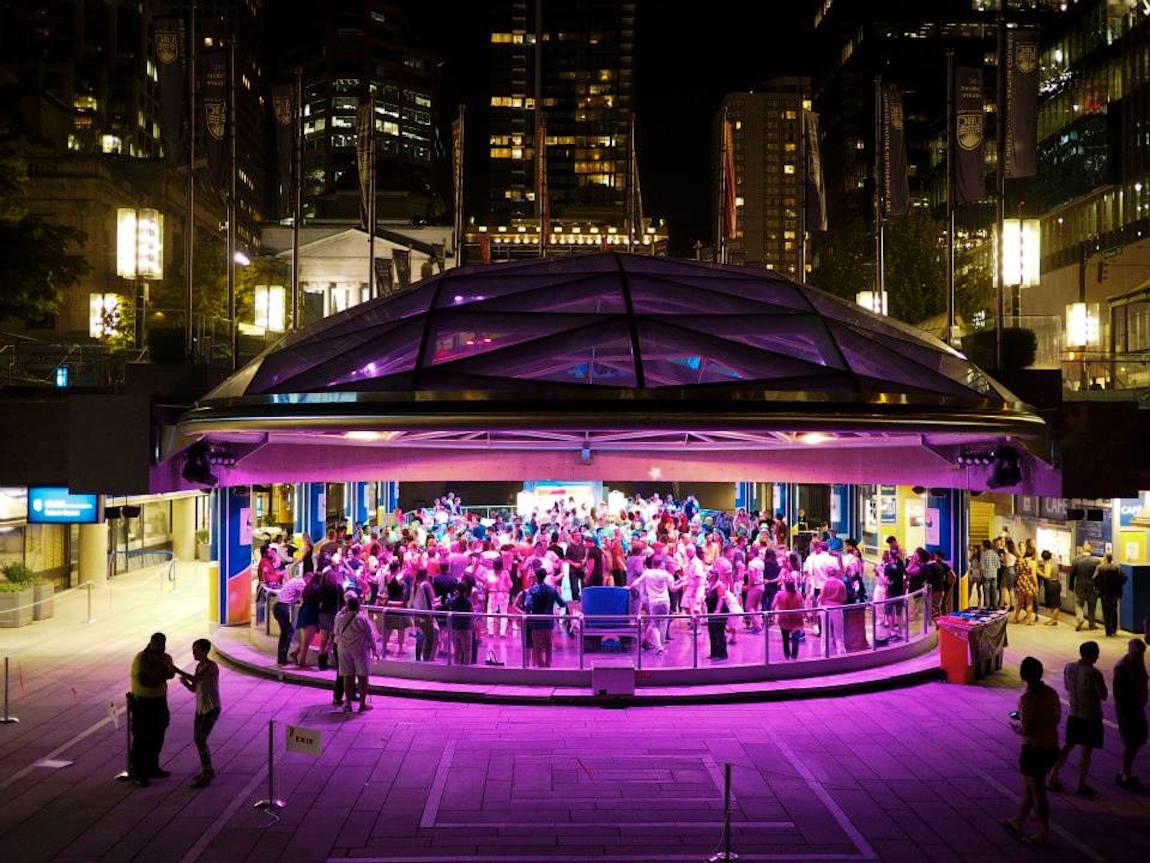 To continue the Greenaway debauchery, an open-air gala followed the screening. Robson Square was packed with cinephiles and partygoers who enjoyed roving circus performances like fire-eating and acrobatics, Ikue Ueno and Jonathan Kol’s vogue-off, and stellar drag numbers by Shanda Leer, Anna Propriette, and ManUp’s golden Ponyboy. It all erupted into a dance party in the end.

Who knew Paul Weitz, the director behind American Pie, could write and direct a feminist dramedy?

Grandma features the curmudgeonly Elle (Lily Tomlin), a noted lesbian poet—clearly based on punk poet Eileen Myles as Weitz opens the film with a Myles quotations: “Time passes. That’s for sure.”—dealing with life after the loss of her partner. When her granddaughter, Sage (Julia Garner) comes to her to secure funds for an abortion, the duo embark on a one-day quest, following a trail of old debts and exes and hawking first-edition classic feminist literature.

The film channels Wietz’s previous effort About A Boy with its intergenerational pairing as set up for humor and life wisdom, but Tomlin’s charisma and well-tuned comedic compass keep the film from delving into mawkish moralizing. Tomlin’s performance delights—she is all sass and verve, ready to fight for her family as well as dole out brutal quips.

Oh, and there’s a cameo by Laverne Cox as a rockabilly tattoo artist? Yes please.

The screening for Grandma was packed, but rumour has it that that Rio may feature the film down the road, so stay tuned Tomlin fans!

Guidance is the debut feature from Canadian Pat Mills, who wrote, directed, and starred in the indie flick. An odd and ballsy comedy, Guidance explores the dark side of the preposterous adult-impersonating-someone-to-go-back-to-high-school trope. Alcoholic and deeply closeted, David is a former child start who hatches a scheme to pretend to be a guidance counsellor in a last attempt bid to pay for rent and get his life together.

Unlike Drew Barrymore’s character in Never Been Kissed, who plays a teen only to bond with the adults, David is an adult whose emotional dissonance resonates most with the troubled teenagers he’s charged with helping. (The film also coyly winks at Barrymore’s troubled child star history to echo David’s own plight). On the job, he connects with adolescent misfits and bolsters their self-esteem with shots of vodka, proffering insightful, hilarious slogans of advice. Despite his own suspect morality, David does help his students navigate racism, fatphobia, and slut-shaming—if not substance abuse and crime.

Mills is uncannily persuasive as the washed-up, downward spiralling David. Cheekily referencing his own past as a child actor on Nickelodeon/YTV’s You Can’t Do That On Television, Mills adds pathos to the extreme character. A goofy black comedy, Guidance takes cues from Kids In the Hall’s queer antics and offers Canadian cinema something vaguely hip to laugh along with. 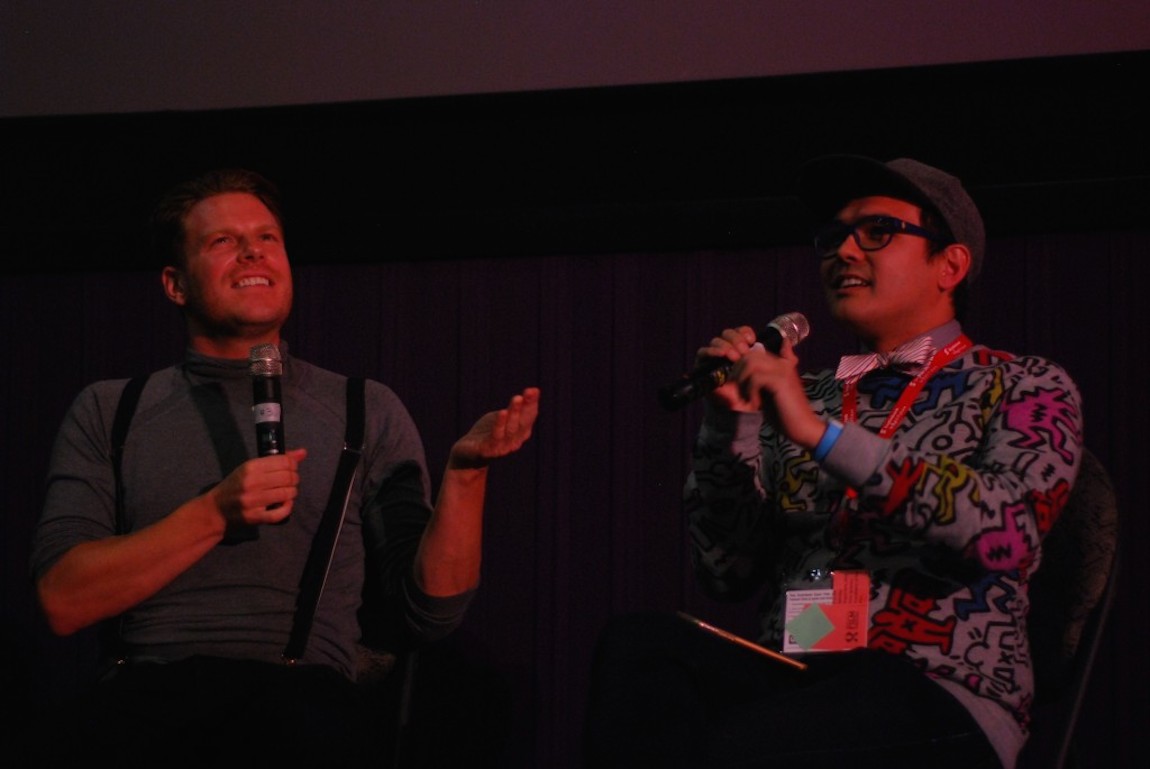 Following the screening of Guidance, Mills was present to answer questions about his debut comedy. He offered earnest guidance to young filmmakers, advising them to pursue through the failures and to learn from criticism without taking it personally.

Guidance was recently released in Toronto and the US and may be released in Vancouver too.

In Lyle, Stewart Thorndike reworks the genre of horror with a feminist lens. Filmed in five days on a shoe-string budget, Lyle presents a truly terrifying and sinister tale of lesbian motherhood in present-day Brooklyn.

The film lives up to its reputation as the lesbian Rosemary’s Baby, paying homage to the groundbreaking horror classic while updating the genre. Pregnant with their second daughter, Leah (Gaby Hoffman) concedes to moving to Brooklyn for her partner June (Ingrid Jungermann) whose career in the record industry is about to take off. The couple settle on a creaky two-bedroom apartment in a Park Slope brownstone despite the cost and bizarre landlady. When tragedy strikes, Leah collapses into paranoia while June becomes preoccupied with work. Spooky clues and red herrings abound as Leah tries to piece together her compromised reality and determine what sinister force is at work in her home. 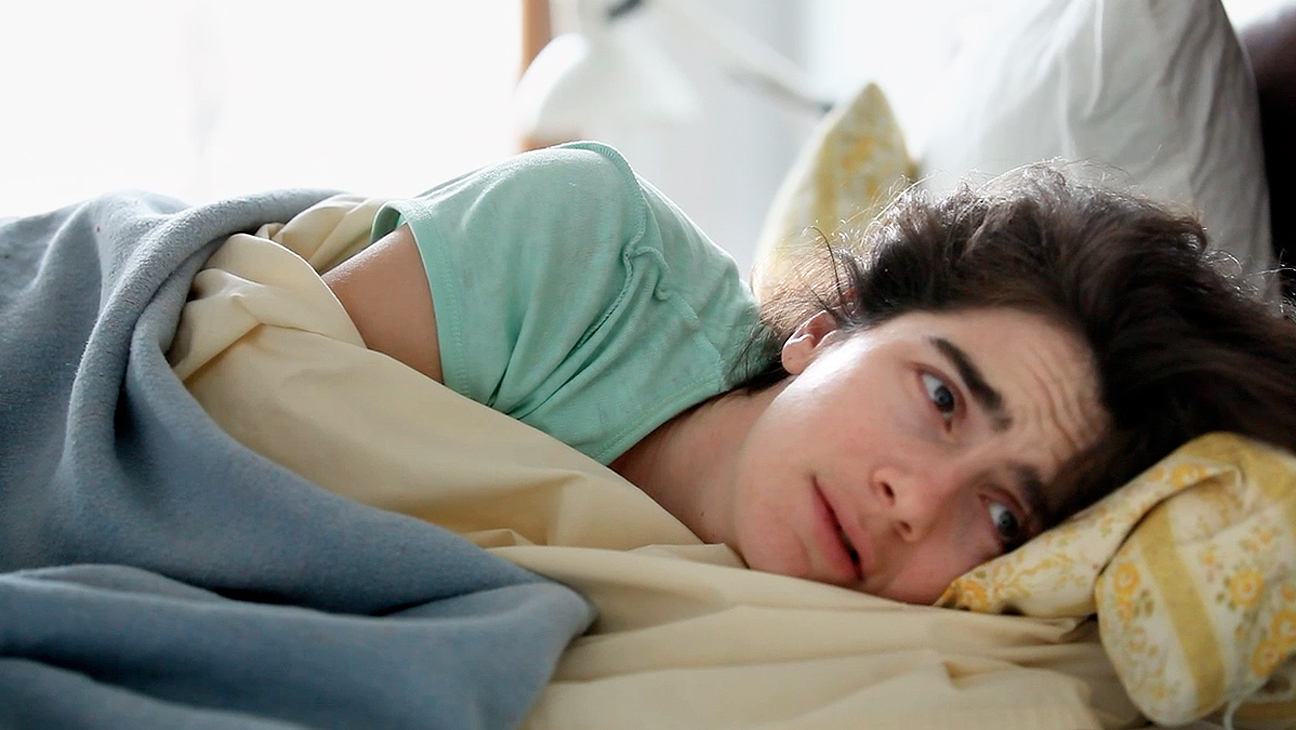 Hoffman’s superb acting carries the 65-minute thriller as it swerves through the creaky corners of the brownstone. Hoffman is the perfect actor to portray Thorndike’s twist of such staple horror-film themes as maternity, femininity, sacrifice and monstrosity.

During the post-screening Q&A, Thorndike revealed that she is at work on two more instalments in her feminist-minded horror trilogy. The second film, Putney, is about a haunted TED Talk and the third will feature a love triangle between a mother, her daughter, and a witch.

A Girl At My Door

July Jung’s first feature film, A Girl At My Door is a gorgeously composed portrait of isolation, hypocrisy, and power driven by close-ups and anchored with sound acting. The film begins with police chief Young-Nam, (Bae Doona of Cloud Atlas and Sense8 fame) settling into a small fishing village on the heels of a scandal in Seoul. When the Chief meets Dohee (Kim Sae-ron), a young girl and the town’s scapegoat who suffers abuse at the hands of relatives, she uses her position of power to protect the child. Her sense of justice, however, tears at the town’s strained social fabric and sets the drama in motion.

A Girl At My Door hinges on the two main actors’ solid performances. Bae’s restraint and ability to convey large emotions with minute gestures dovetails with Jung’s understated, beautiful shots. As Dohee, Kim portrays a complex character who experiences trauma and joy and possesses agency, never falling into the typical trappings of victim. While Song Sae-byeok as the villain comes across and solely oafish and one-dimensional, Jung’s more subtle direction of Bae and Kim spurs on this intense exploration of violence, abuse, and homophobia. 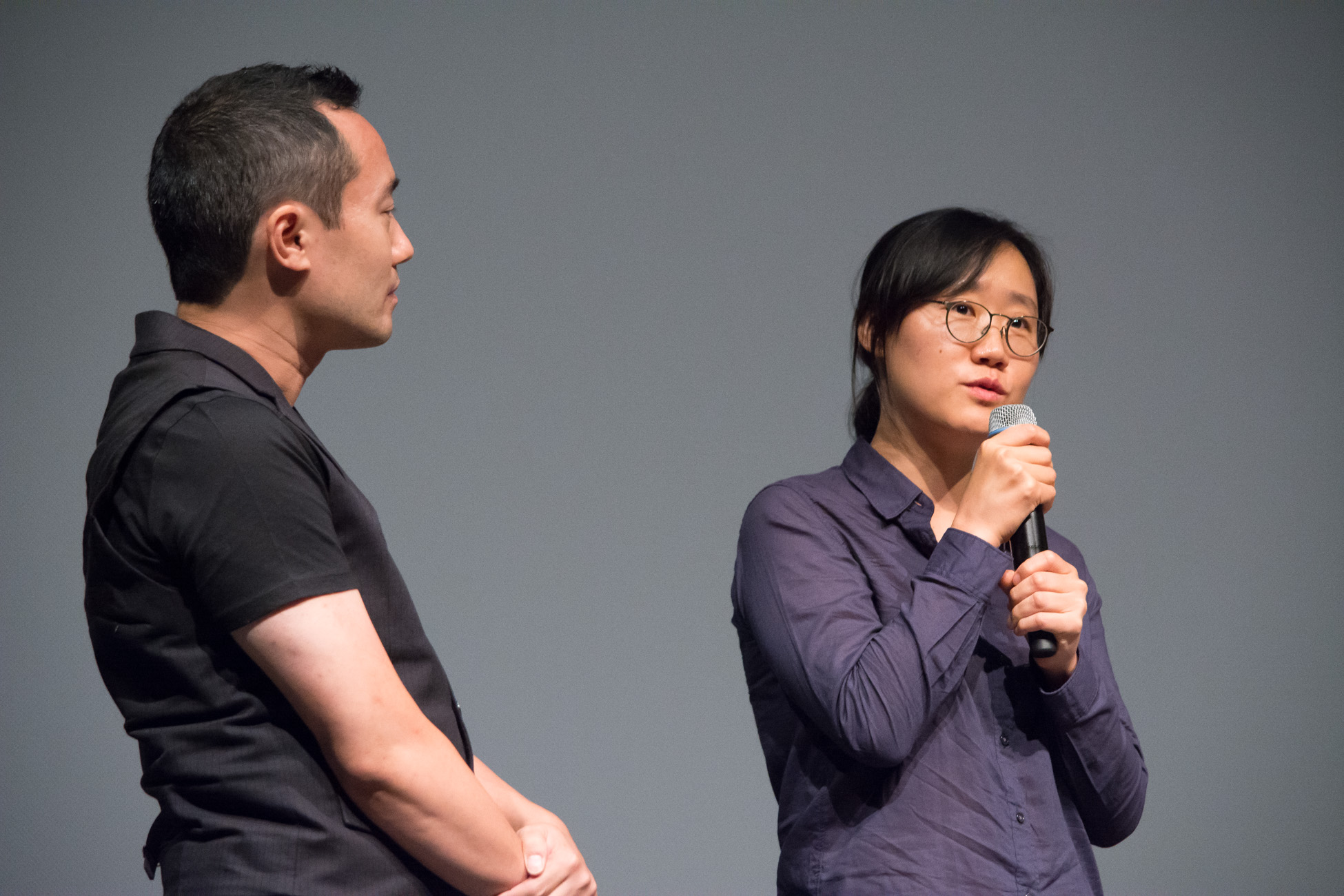 Craig Takeuchi of The Georgia Straight led the Q&A that followed the screening. During the interview, Jung talked about her experience working with the Bae and Kim, who both did the film pro bono because they believed in the project. Jung also spoke about LGBT rights in South Korea and the slowly changing social landscape.

The festival is currently aiming to raise funds to expand their Out in Schools project that brings films and education about LGBTQ issues to high school classrooms to combat homophobia and transphobia.

The festival continues this weekend and concludes on Sunday with a screening of Game Face. More information here: queerfilmfestival.ca