On August 22, a motley group of people gathered at East Vancouver’s Pandora Park for Field Camp — a collaborative participatory art event and neighbourhood celebration organized by Barbara Adler and Dance Troupe Practice as part of DTP’s Field House Residency. The event drew from Barbara’s recent work on ‘tramping,’ a Czech cultural tradition where, “dressed as imagined backwoods explorers, Czech tramps vandr into wilderness, set up camp, and sleep in the open air as a means of building and celebrating friendship” (quote drawn from Field Camp publicity materials). With a potluck, clothing swap, craft activities, musical performances and sing along, sports, an outdoor film screening, and camp out, Field Camp combined familiar camp and community event activities with unexpected visual and conceptual delights that transformed the park. 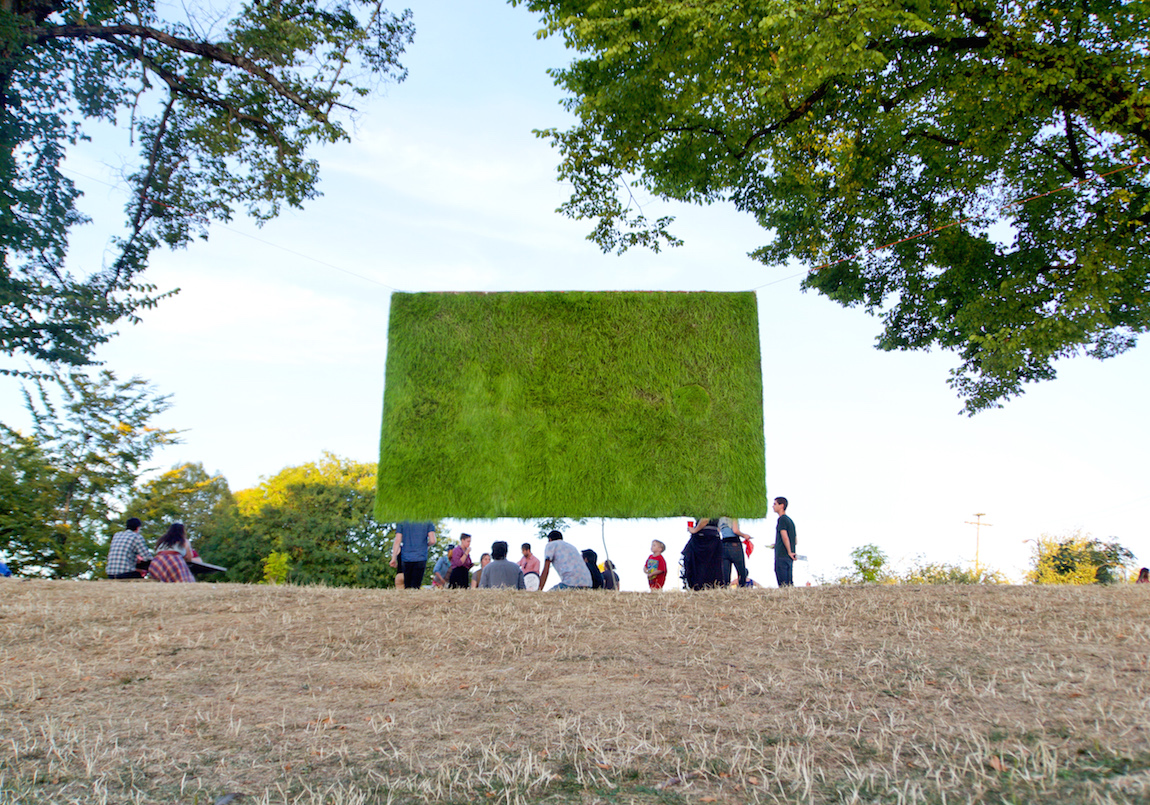 Landscapes of a theatrical imaginarium

Preparing to participate in Field Camp the first challenge was figuring out what to wear. Though I will happily dress up with the least excuse, I moved back to Vancouver late last summer with about a quarter of my wardrobe—leaving the rest in storage on the other side of the country. What I brought could most charitably be described as professorial. That’s to say that nothing matched Adler’s description of “cowdudes, rodeo queens, woodsfolk, treehuggers or whatever your vision of a prepared wilderness explorer may be.” Visits to thrift stores in my neighbourhood proved uninspiring, and so the outfit I assembled from what was in my closet was more reminiscent of rambling the British coastline looking for fossils with Darwin than of the frontier of the American west.

But as I contemplated gumboots vs hiking sandals it hit me that both the landscapes mentioned above are indeed imaginary from our current perspective. Their ‘wildness’ shaped by a nostalgia for certain kinds of freedom of movement or actions we would like to perform, and the costumes evocative of either based on historicized visions of the time rather than function or fashion. Dressing in appropriated costume that is part historical and part imaginary uses anachronism theatrically. In this case for constructing and marking your participation in the imaginarium—a theatrical wilderness overlaying the urban surround. 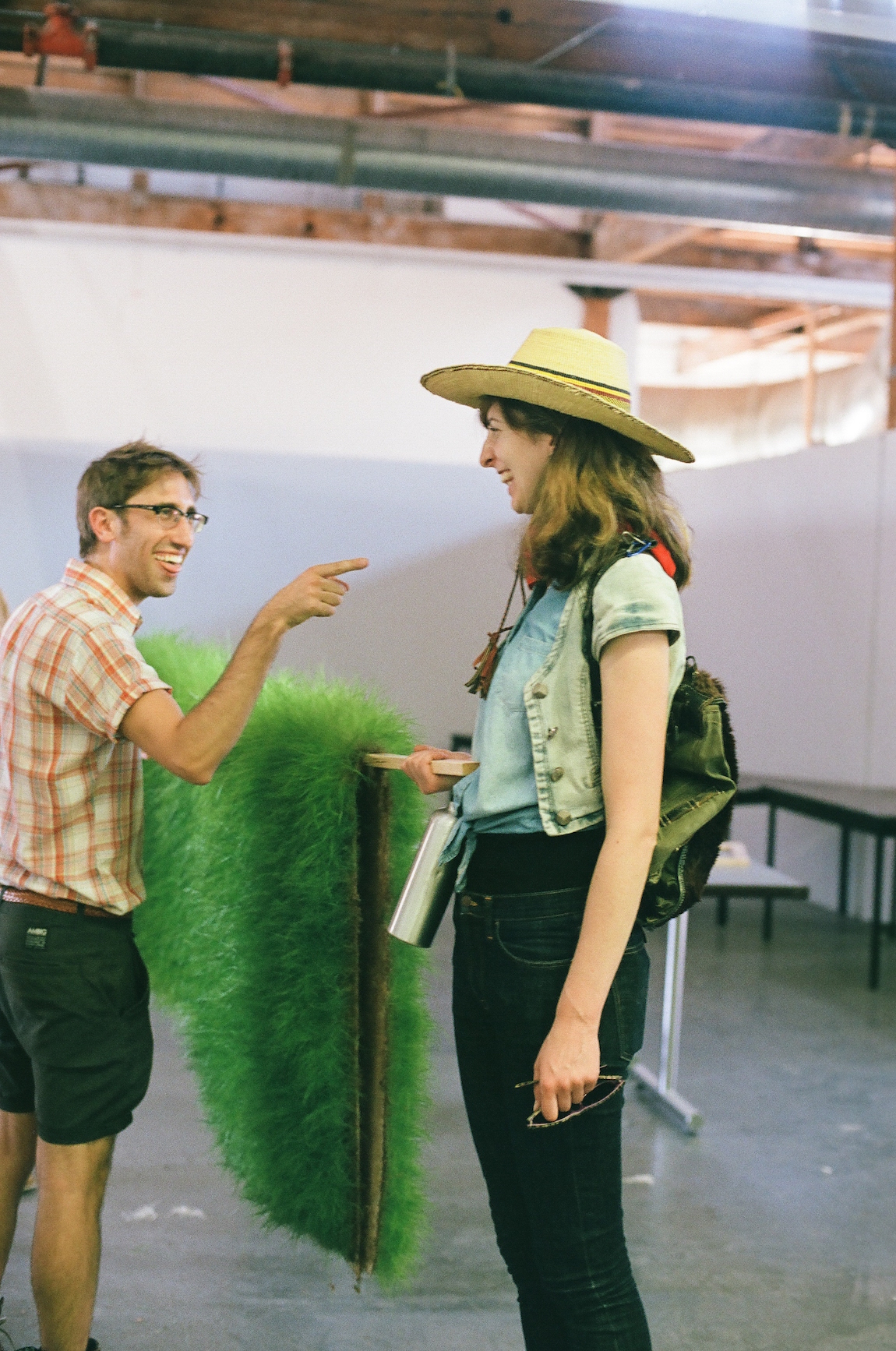 It might seem trivial to focus so much on wardrobe, but it is not. Not only is costume central to the tramping tradition, but fashion in Vancouver is generally informal, conservative, and constrained by the weather so dressing outside of the expected stands out. It signals to others that there is more to the vandr than people walking from one place to another. And while it might not signal resistance to a communist regime the way it did to mid 20th century Czech tramps, it is nevertheless an act of resistance and belonging like punk anti-fashion. I wore the gumboots and they were uncomfortable to walk in. 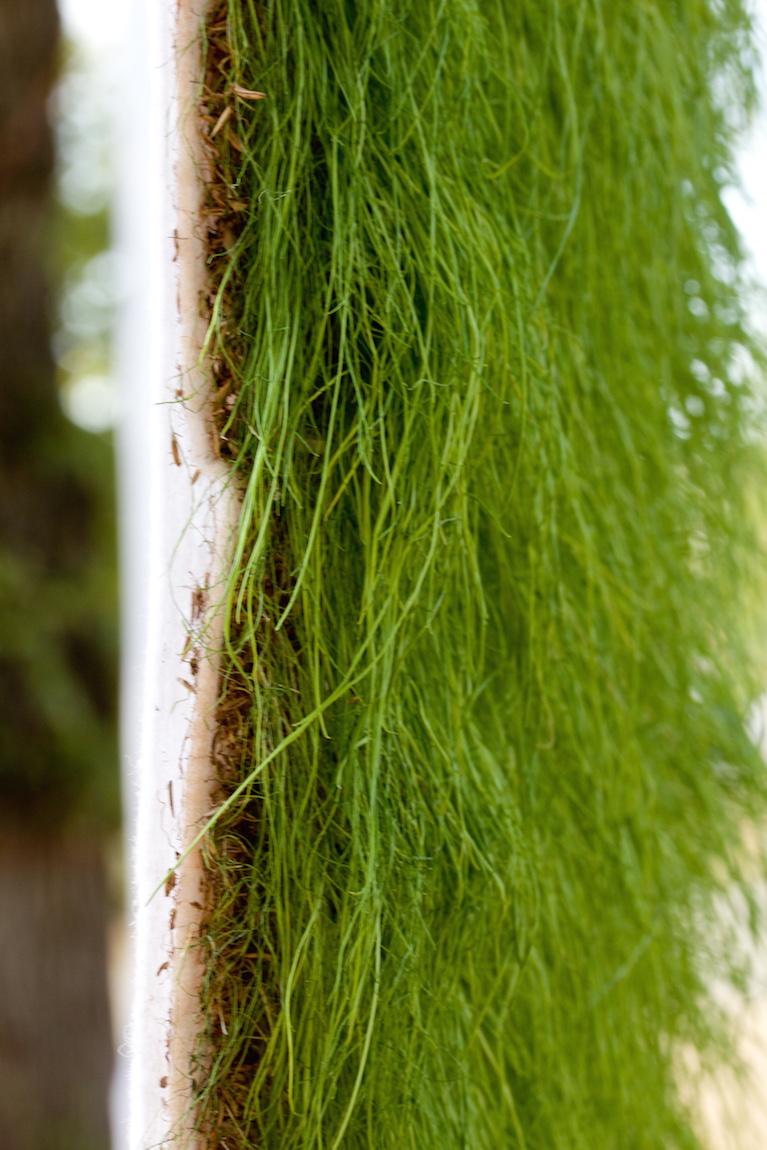 We met at the SFU Visual Arts Studios at 611 Alexander Street to group and vandr to Pandora Park carrying sheets of grass grown on fabric. Barbara and Megan Stewart carried the two smaller mats draped over a length of wood. A larger sheet—to serve as a film screen—was stretched on a frame so it could be carried. Grown by Lukas Engelhardt and Robert Leveroos, who figured out the technique, the grass was possibly the lushest seen in Vancouver all season. 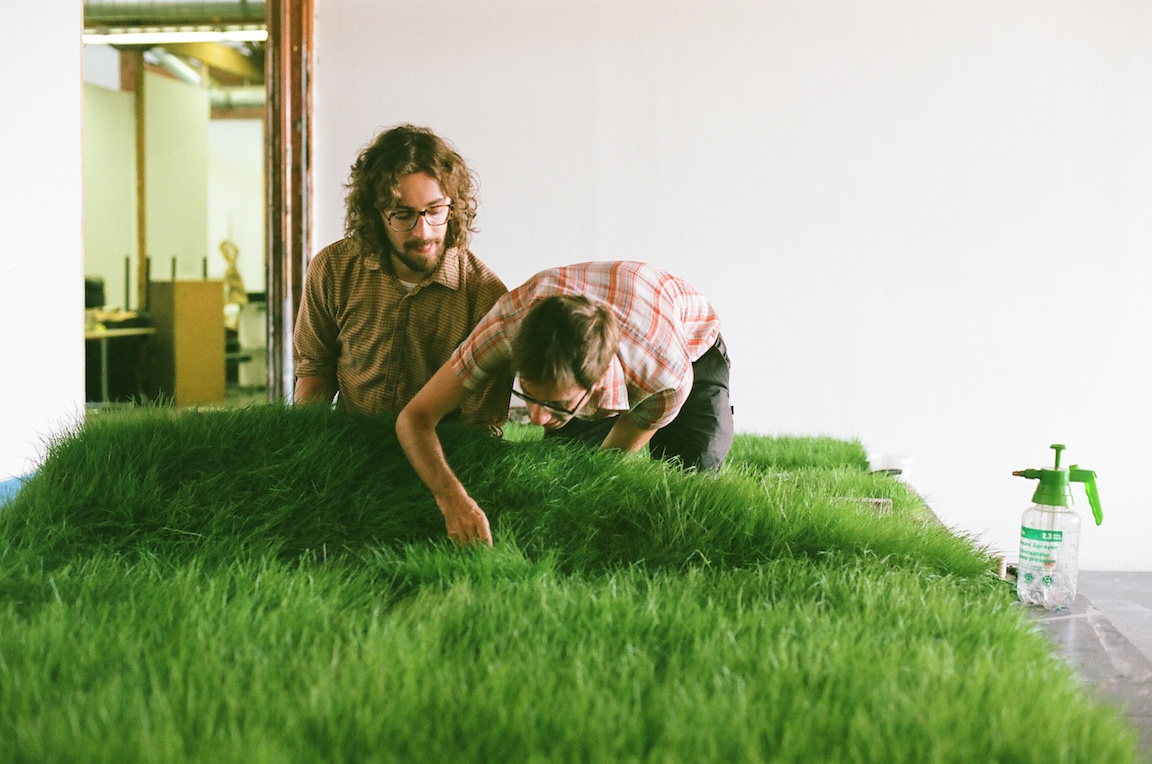 ‘Tramping’ in costumes to the park with sheets of grass was a highly textured aesthetic experience. I got to take some pictures, which allowed me to toggle between the perspectives of participant and observer. The contrast of explorer outfits and grass sheets against the industrial city scape of East Vancouver was striking, and transformed an ordinary route into a kind of procession. Preparing to cross Commercial, Megan pointed out that it felt like a parade, with grass banners and floats. People responded—some looking confused or asking questions—mostly yelling jokes about ‘grass’ out of car windows, hardly surprising in Vancouver. 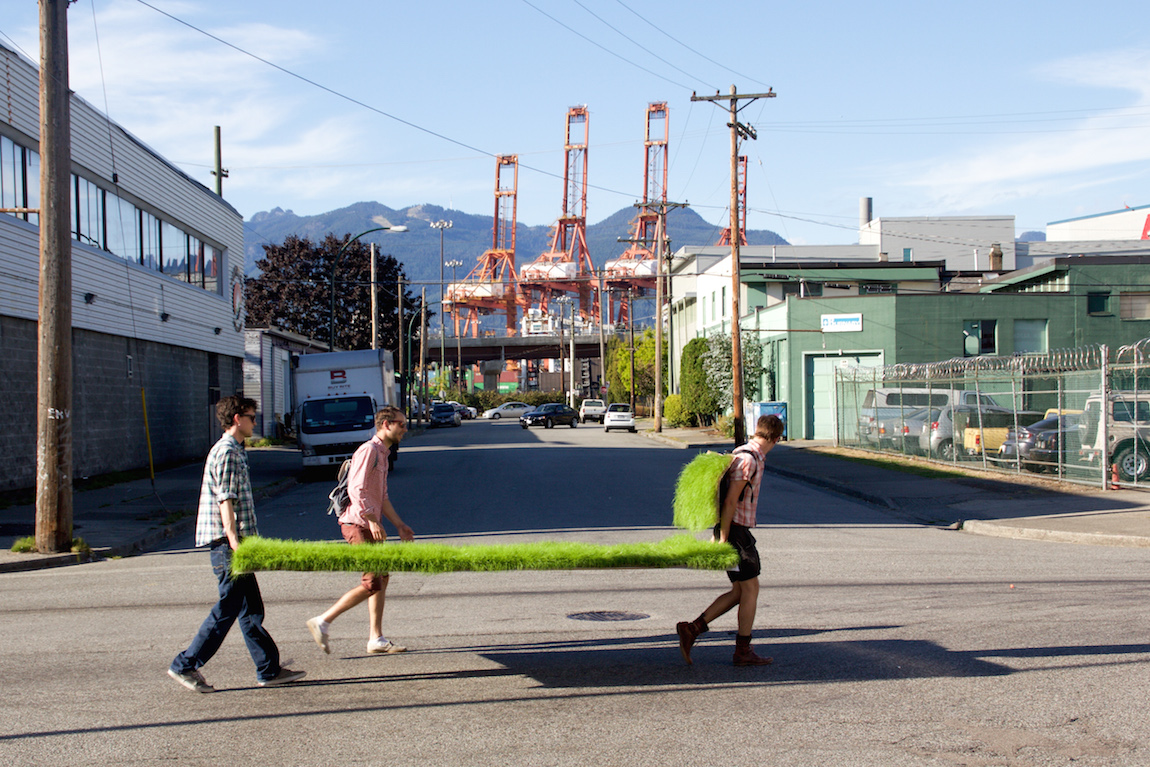 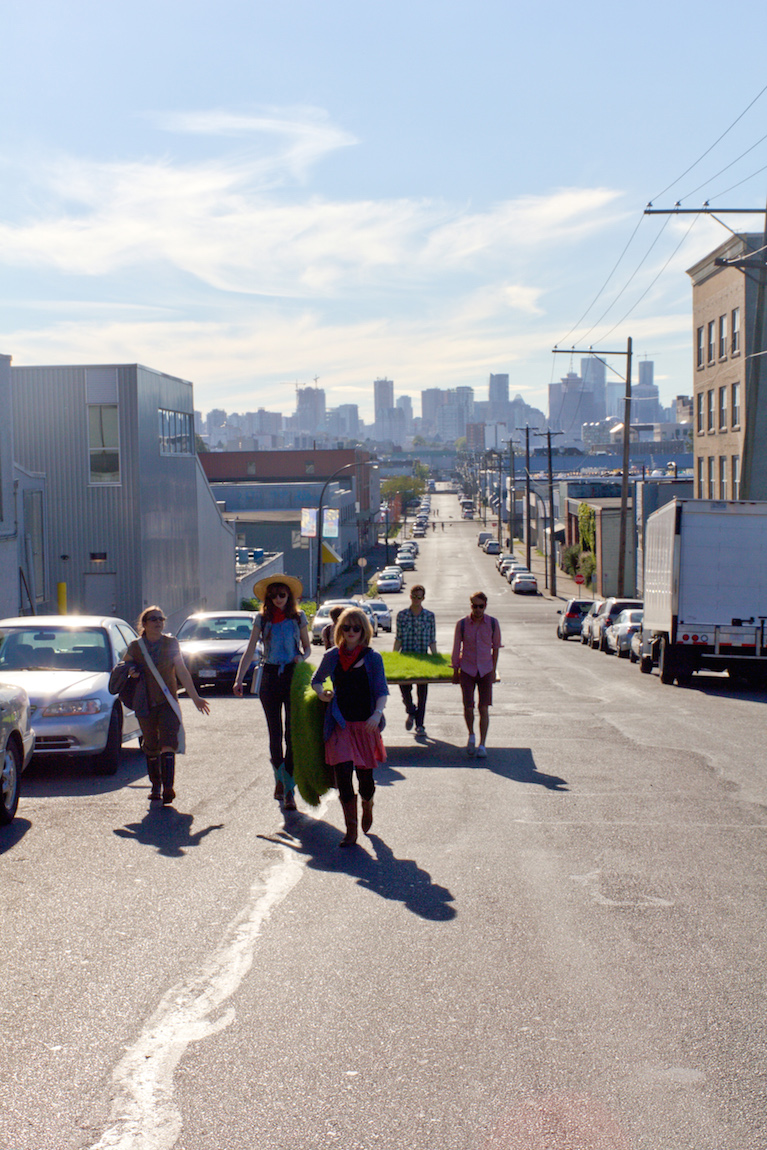 I knew a bit about Barbara’s project and had once run into her with a group on a vandr, but participating in this part of the project was necessary to really make aspects of it salient. The twinge of self-consciousness standing out in public and marking yourself as different yields to a feeling of defiance and belonging with a group. Seeing people’s outfits as costumes, then as right for the time and place offers a fantastic play between the real and imaginary experience of the landscape. I highly recommend going on a vandr if the opportunity presents itself. Wear comfortable shoes.

Pandora Park was quite busy when we arrived. It was an excellent venue for this sort of a project—with enough open space to accommodate the variety of activities, a new and well used splash park, and spectacular views of the city and setting sun to the west. Art in parks is amazing because it helps to demystify art practice, to open up dialogue and to allow people opportunities to participate. Site set up immediately drew interest with Robert and Lukas finding ways to let local kids help them hang the grass screen between a couple of trees. Attendees were a mix of artists, locals who knew about the event, people who happened to be there, and some who went home to change and come back. A uniformed park official (with her very adorable dog) sat off to the side, there to serve as a community liaison if necessary. 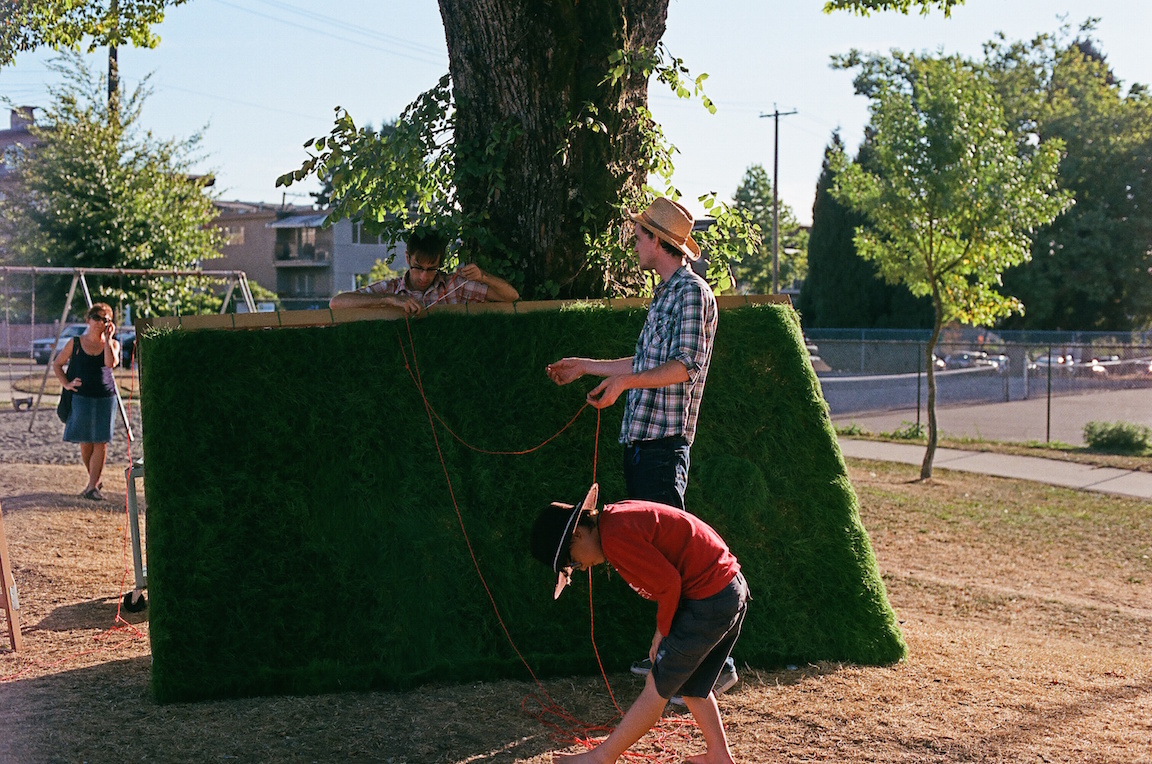 The camp portion of the event began with crafts: decorating old denim jackets and other apparel fringes, sequins, and other bits of ornamentation. Kyla Gardiner supervised, inviting people in and getting them started. Soon there was a group of men and women sitting around quietly crafting and catching up or getting to know each other over shared work. If it were up to me there would be more public crafting events, as this is an experience that is at once traditional and subtly subversive given the contemporary capitalistic society. Crafting continued through the pot luck (delicious), and musical performances (excellent). It culminated in a fashion show that was reminiscent of camp with a touch of art school critique. 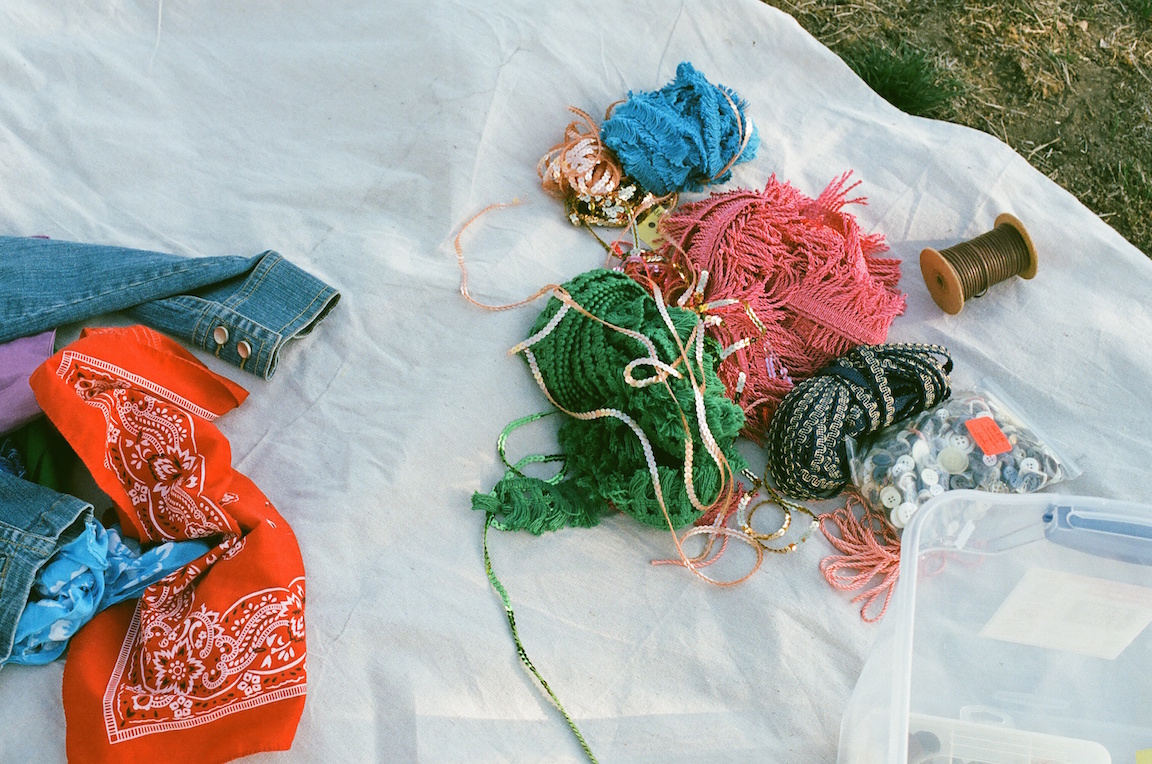 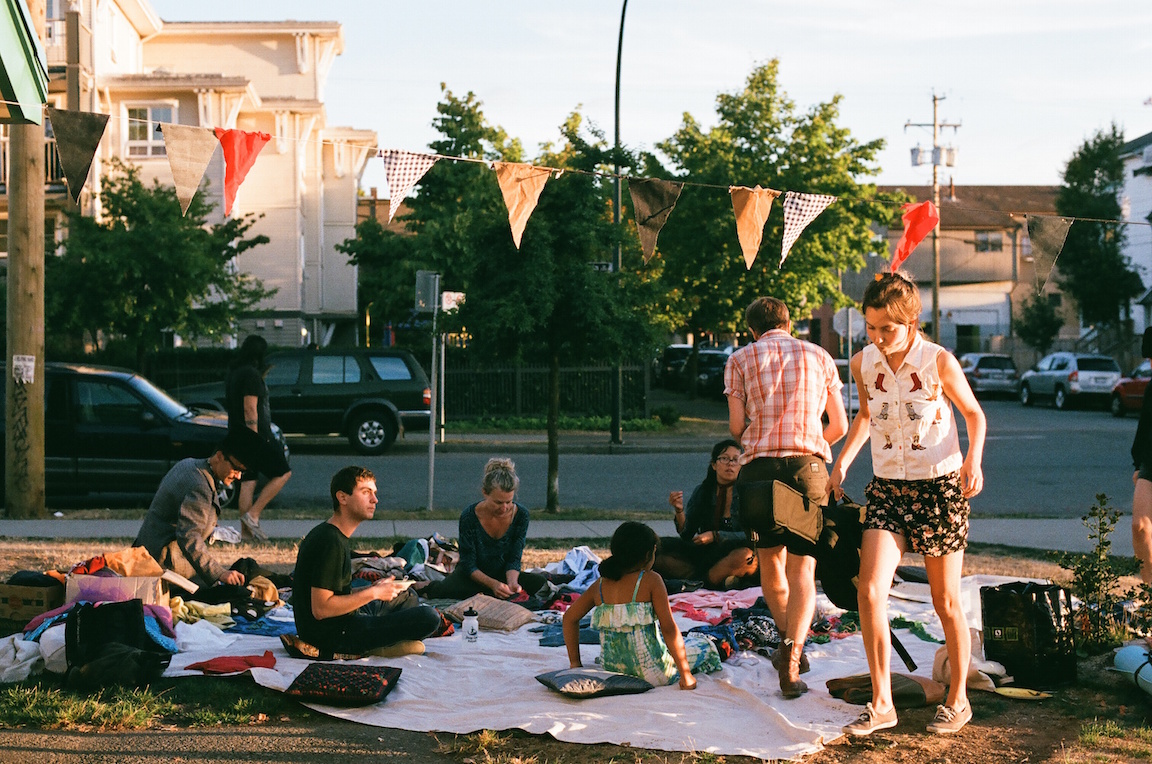 Denim crafting in the park – Photo by Megan Stewart

A highlight was the running of the ‘Field Camp Classic’ a team relay race with charming whimsical elements characteristic of Barbara’s work. Two teams raced through a loop of activities that included jumping up a hill in a sack race, chasing and ‘taming’ wild “ponies” (played with hilarious enthusiasm by Megan and James Meger) to get a hobby horse to ride to a station where we had to throw balls into buckets of water before sprinting back to the start. My team won despite a few bad starts (including me almost falling over laughing at the ‘ponies’ antics) thanks to our excellent anchor.

At dark everyone settled down to watch the 1969 version of Pippi Longstocking. The grass screen was dense enough to block light and the slight ripples in the wind were an excellent reminder of its nature. The film was well chosen—balancing family friendliness with enough complexity to appeal to the artists in the crowd. It is also just an intensely weird film, and watching it outside on a grass screen may be the ultimate way to enjoy it. Many people had pillows and sleeping bags preparing for camping out and that along with a virtual campfire projected on the screen before and after the film made the scene cosy and comfortable. People, dogs, and even a skunk passing by on the walkway served as a continual reminder of the layered uses of the park. 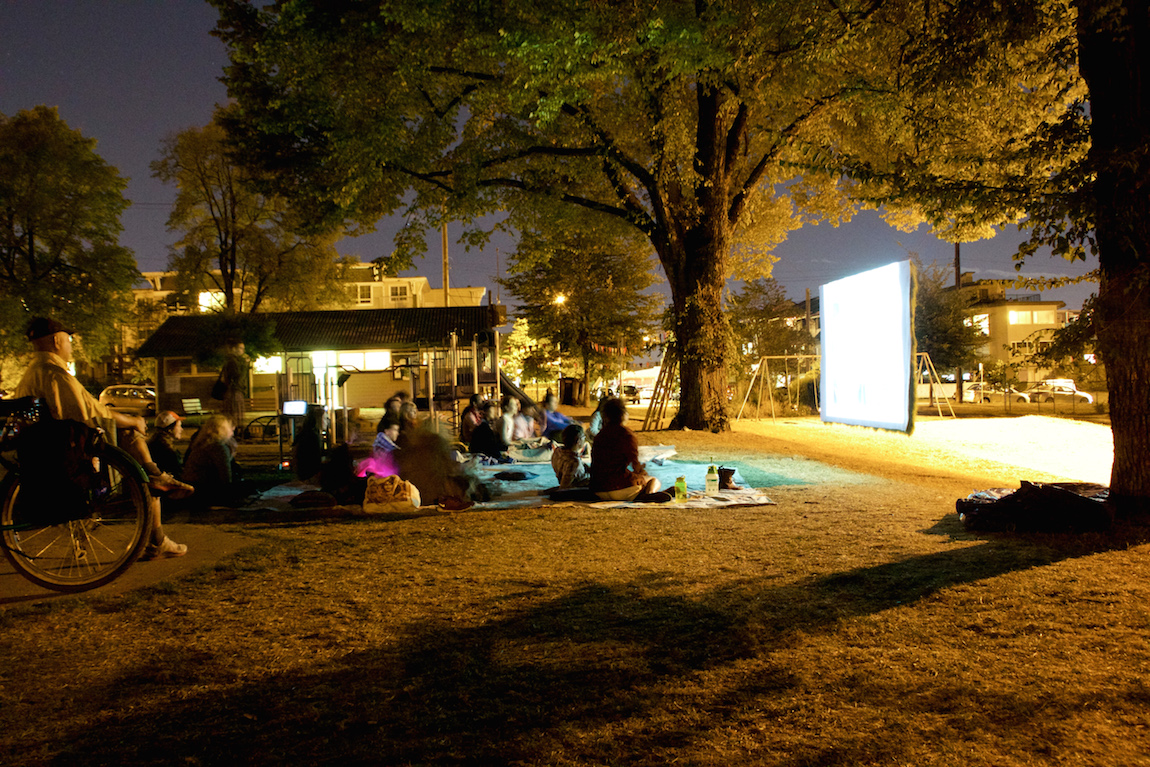 Movie watching under the stars – Photo by Lukas Engelhardt

I admit that I didn’t camp out, though I would have liked to. Participants report that sleeping in the park was surprisingly cozy. The campfire and disco ball tent (bombastically contributed by a radically prepared participant) kept watch over the sleepers all night, designating the space and creating a kind of protective visual canopy. A couple of times during the dark hours, local partiers stumbled on the group, having followed the projected fire from across the park, and in one case, from across Nanaimo Street.

Despite some of the manic transitions through different activities, Field Camp succeeded in engaging participants to create a shared experience of the space that was transformative. Being a sanctioned activity as part of the residency, Field Camp wasn’t meant to be activism—but it nevertheless offered participants an opportunity to challenge their own programming about park use and public space. 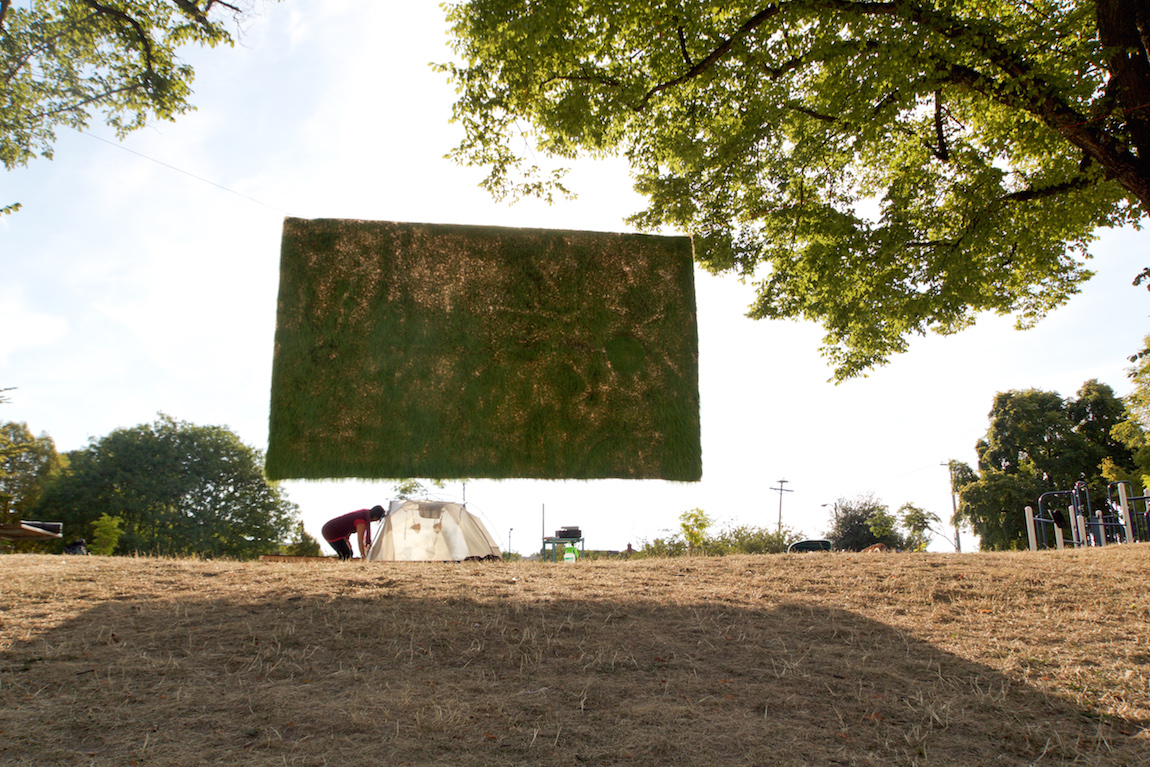 To those of us fortunate enough to have never slept rough in the city, sleeping outside looking at the stars, sing alongs etc., might be things we’ve only done in places designated for those activities—campsites, cottages, maybe backyards. The kind of behaviour expected, permitted or accepted in city parks is different—eating, recreation, lounging, playing—and only within certain hours. I brought up freedom at the beginning, and there is a heady delight in being in a park after hours and doing something you don’t normally get to do there. These spaces belong to us (the public) and should serve as sites for community building and neighbourliness—offering people the opportunity to feel like it is their space. However, while city life makes public outdoor space important, it also makes coordinating the use of shared space a necessity. What role do and should these green spaces play as we face increasing urban density? With less private outdoor space how do public parks change? Of course we do not expect artists to provide answers to these questions, but a strength of Field Camp was in offering a new way of experiencing the park with a rich enough vocabulary to reimagine the possibilities of urban green spaces.

Most explicitly Field Camp asked participants to imaginatively engage with the park as wilderness explorers. ‘Wilderness’ is a contested concept: simultaneously an everyday distinction based on land use, a romantic idealization of colonized lands, and a technical designation. I think the ‘tramping’ imaginarium destabilizes the urban/ wilderness dichotomy; recognizing the fantasy element of wilderness and approaching the city as explorers in an unknown land suggests new opportunities for movement and action. New ways that we might be on the land. 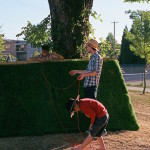 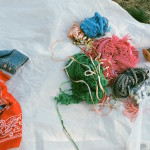 Denim crafting in the park – Photo by Megan Stewart 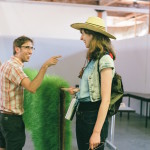 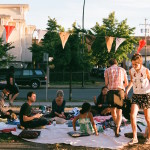 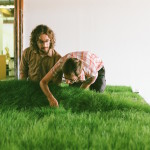 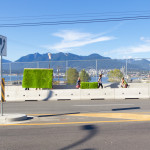 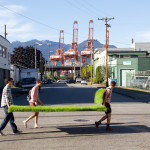 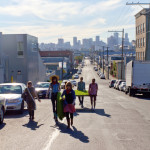 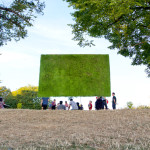 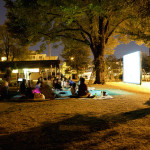 Movie watching under the stars – Photo by Lukas Engelhardt 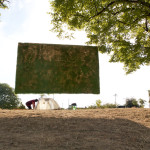 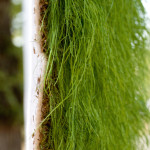