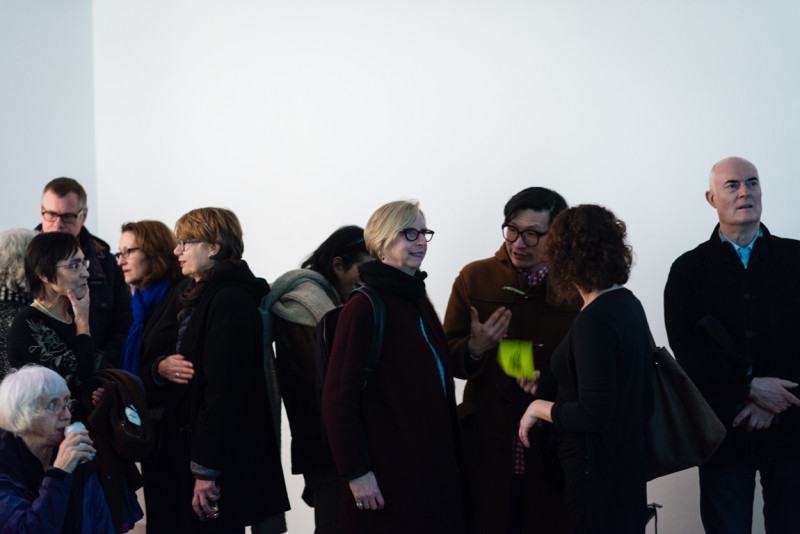 Those present at Republic Gallery for the opening of Carol Sawyer’s Shadow Puppet pressed up close to one another while chatting, maintaining a respectful yet unbidden distance between themselves and the two-channel video installation projected at the far end of the gallery. To get to a vantage point, one had to carve a path through the crowd, delivering many excuse me’s while gently maneuvering around small groups clustered together in conversation. In the videos, the lone performer of an encounter between a dragon and its slayer prepared for her roles, fastening various pieces of costume to her body, before the drama unfolded ad infinitum. A man in a grey wool suit made his way to the periphery of the throng to ask a woman there, “So what’s this all about?”, gesturing towards the installation with a nod. “She’s made shadow puppets with her body,” was the answer he received. The man looked to the video for a few seconds, looked back to the woman as if hoping for more, eager to engage in conversation, and then turned around to enter back into the group, disappearing amongst the chatting bodies. 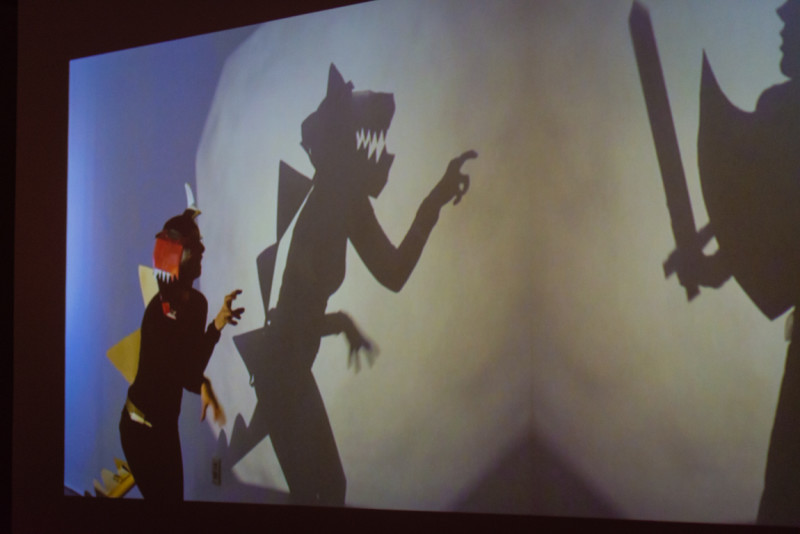 The two videos, projected side-by-side, met seamlessly to create an almost mirror-like reflection of one another, two identical orbs of light with two different shadow-figures cast on each—both characters played by Sawyer herself. Though the only performer in the video, Sawyer’s presence was multiplied—first, by her presence in the shadows, and second, by her presence in each video.

A small detail of an electrical outlet near the bottom of the wall in both videos suggests that Sawyer perhaps made the film in her home rather than a studio, lending the impression that her performance is makeshift and intimate. There is something slightly voyeuristic in it all, as though she has invited the viewer into her home to quietly observe a clandestine creation she has been working on, entrusting us with something secretive. 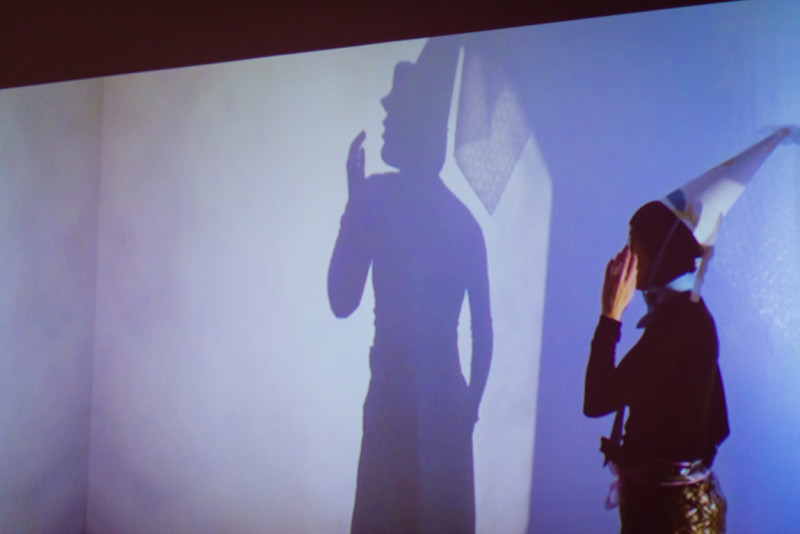 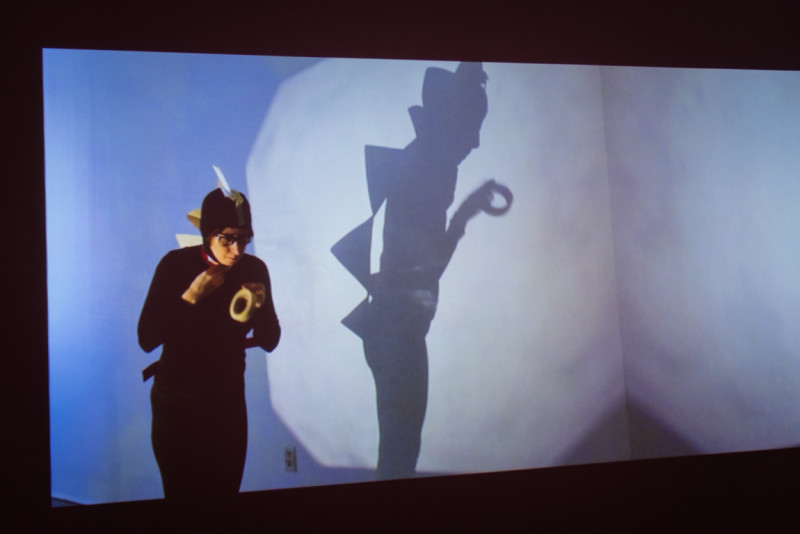 Sawyer’s work differs from other shadow play performances by allowing the audience to simultaneously experience both the show and the behind-the-scenes view, both the illusory product and Sawyer’s presence-as-performer. The viewer sees both rehearsal and final product. In the videos, Sawyer looks continually to her shadow for cues, responding to the nuances of her silhouette, adjusting her body accordingly, and calculating her subsequent movements. Yet preserved on video, that rehearsal is also the final culminating moment of her efforts.

In telling The Allegory of the Cave, Plato instructed Glaucon that one’s perceptions are only the traces of a larger reality. A row of prisoners shackled in place all their lives, unable to move or see anything except a cave wall in front of them and the shadows cast upon it, remain ignorant to the larger reality. Having never witnessed the true forms from which the shadows are cast, those silhouettes are all they know of the world.

But Sawyer, by including her body-as-performer in the videos, affords the audience a view of this larger reality, the true form that creates the spectacle. 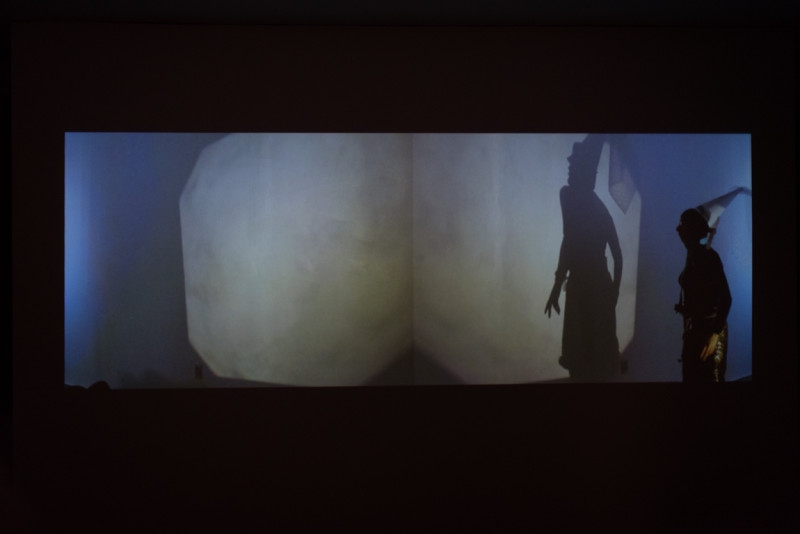 Though the video held my attention for the majority of the night, my mind kept returning back to the still photographs after I left the gallery. In those images, the viewer once again is afforded a view of both Sawyer’s body-as-performer, and the shadow character cast by her shape. While it appears at first glance that the viewer is being given a view into the origin of the shadow, it is a very calculated, partial view. Due to the angle at which the camera was situated, Sawyer’s body and shadow do not seem at first to match up. In the photographs, Sawyer situates herself so strategically that she is able to artfully portray with her silhouette a character completely different from that which she embodies in costume. In one photograph, a shadow knight on the wall prepares to slay Sawyer dressed as a dragon. In another, a shadow man tentatively reaches his hand out to Sawyer, made up as a wolf. 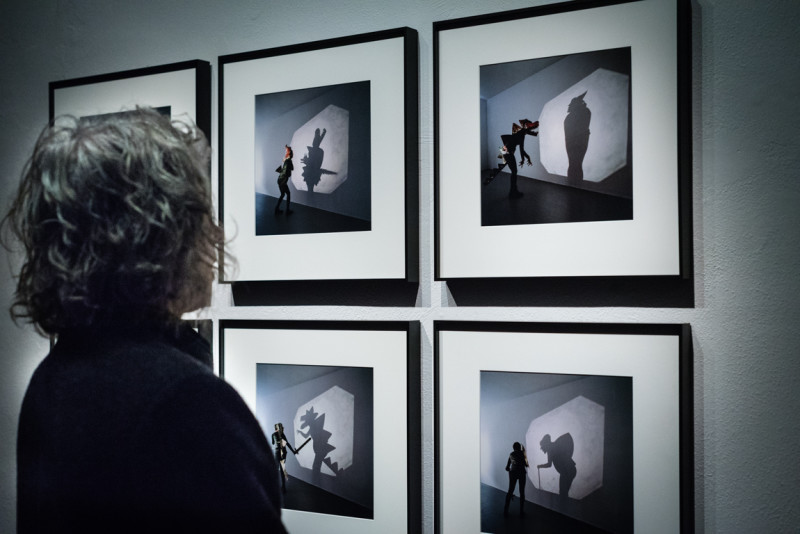 Returning to the allegory, it appears that the audience is again afforded a view of reality by virtue of the presence of Sawyer’s body within the frame, but this is not the case. Through the two dimensional, flattened image, the viewer is unable to see the reality of three dimensions. All is subject to the viewers’ perceptions of the illusory plane, onto which Sawyer plays out these small fictions.

For those who chose to accept Sawyer’s invitation to stop and quietly observe her intimate performances, there was much to witness in the images she created.

Shadow Puppet is on display at Republic Gallery from January 9 to February 7. 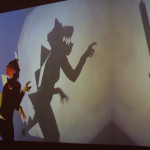 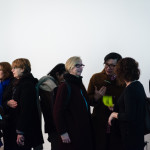 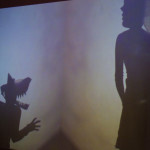 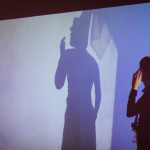 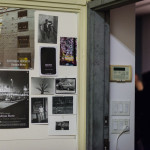 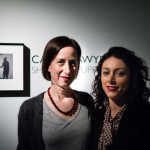 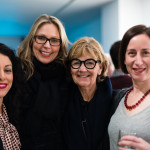 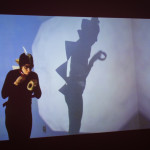 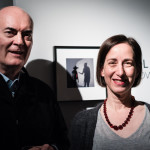 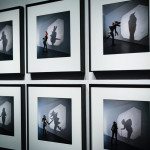 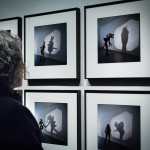 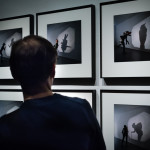 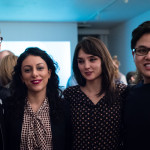 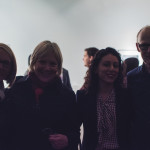 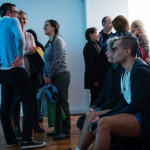 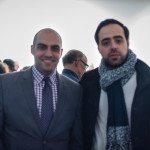 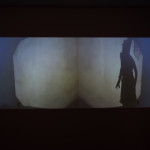 Dancing On The Edge: Wobble Tops