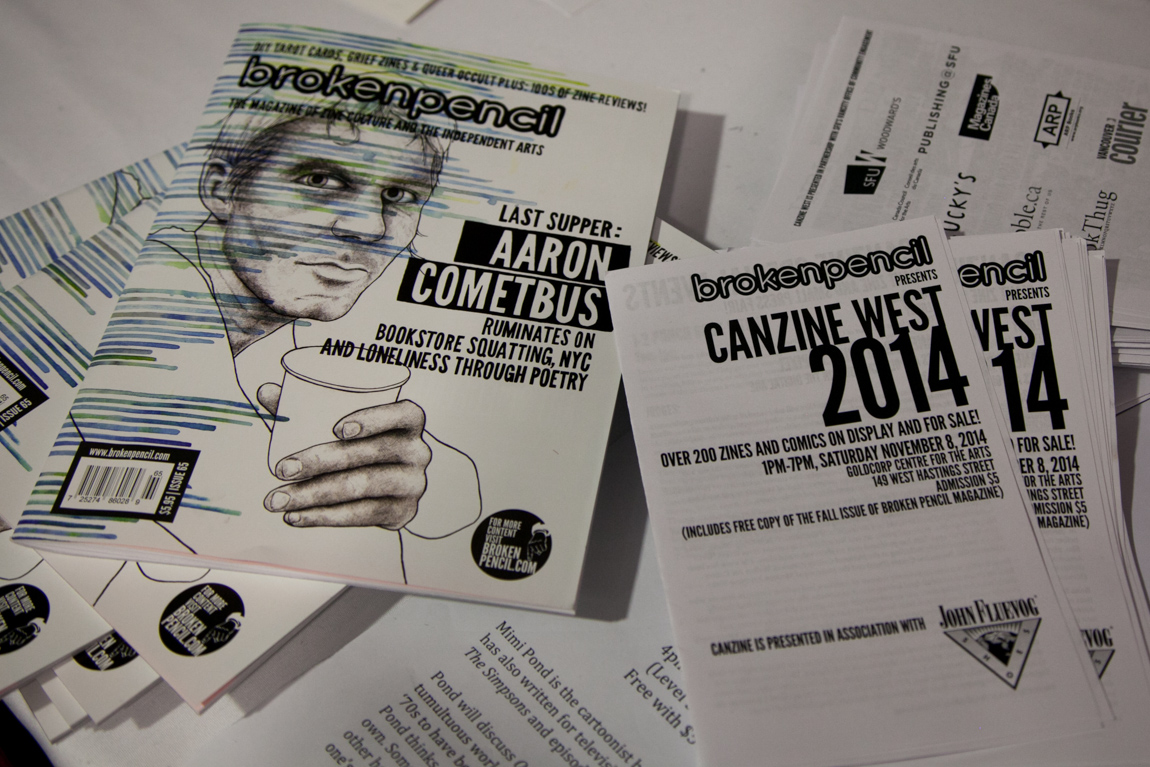 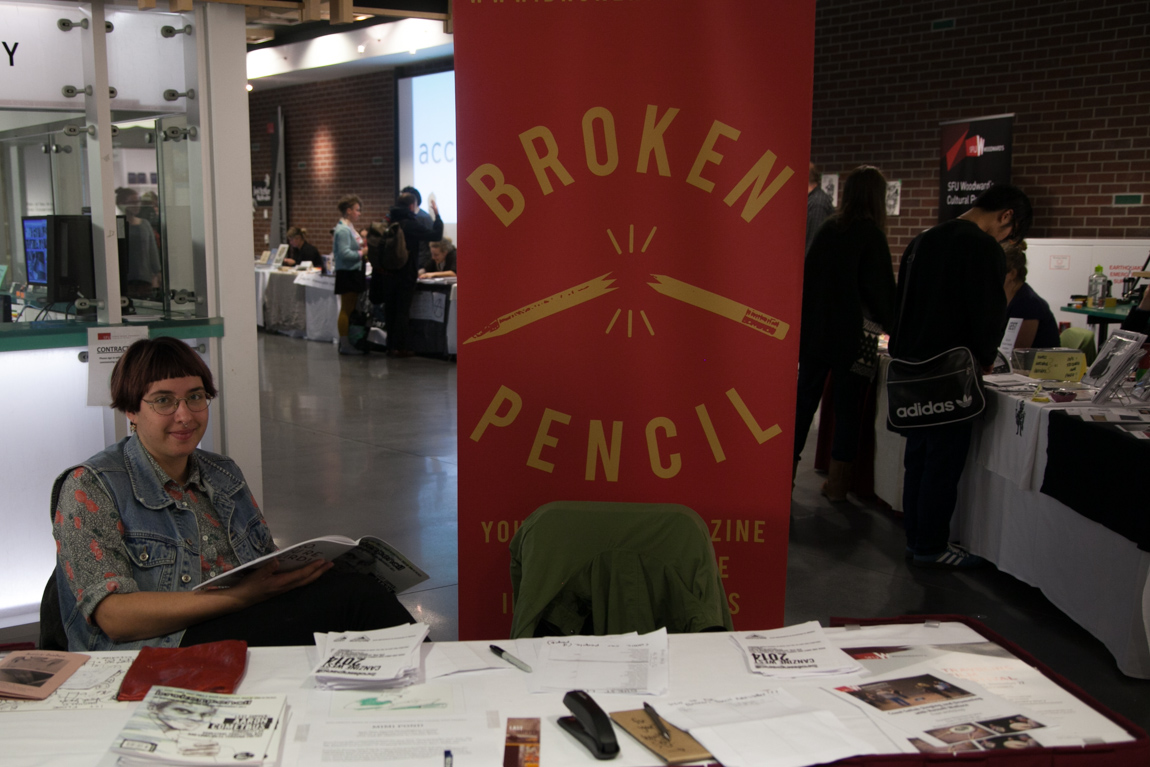 Canzine West happens around the same time every year, coinciding with the first frost. T-shirt clad vendors keep piles of winter jackets, sweaters and scarves under their tables. Canzine 2014 is no different. Attendees rush into the main foyer of SFU Woodwards with foggy glasses and blue hands. While these details may not seem overly important, the changing season signals a shift from extrovert to introvert art practices, allowing festivals such as Canzine to inspire new expressions of creativity. Canzine is the final spark before that chilly period of creative rumination that accompanies a Canadian winter. Canzine is a celebration of Canadian zine culture. The event was created by Broken Pencil Magazine 15 years ago as an opportunity for emerging artists and writers to exhibit and sell their books, participate in panel discussions and compete in the infamous 1-2 Punch Book Pitch. 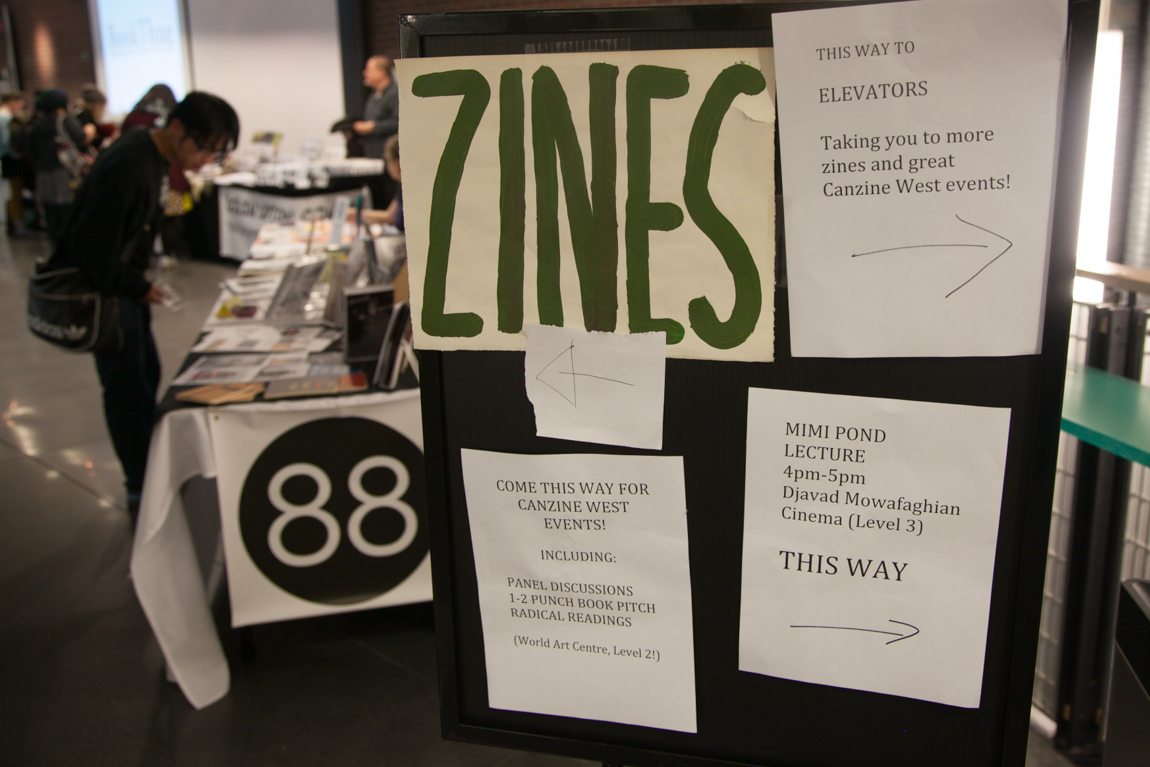 There are two floors of tables offering an incredible variety of publications, from abstract art books to full-length novels. While the artists and writers are technically vendors, they hardly qualify as pedlars; there is more excitement to share stories than make sales. The discussions are not limited between vendors and festival-goers, but extend across and down the halls. Tables are chatting to each other while swapping books and buttons. It is a chaotic and intoxicating hybrid of bohemian and punk influences. A serious discussion about binding styles is happening next to a thumb war, next to someone sewing a patch, next to a circle rolling cigarettes, next to someone reloading a stapler. The vibe is reminiscent of an open studio art party. 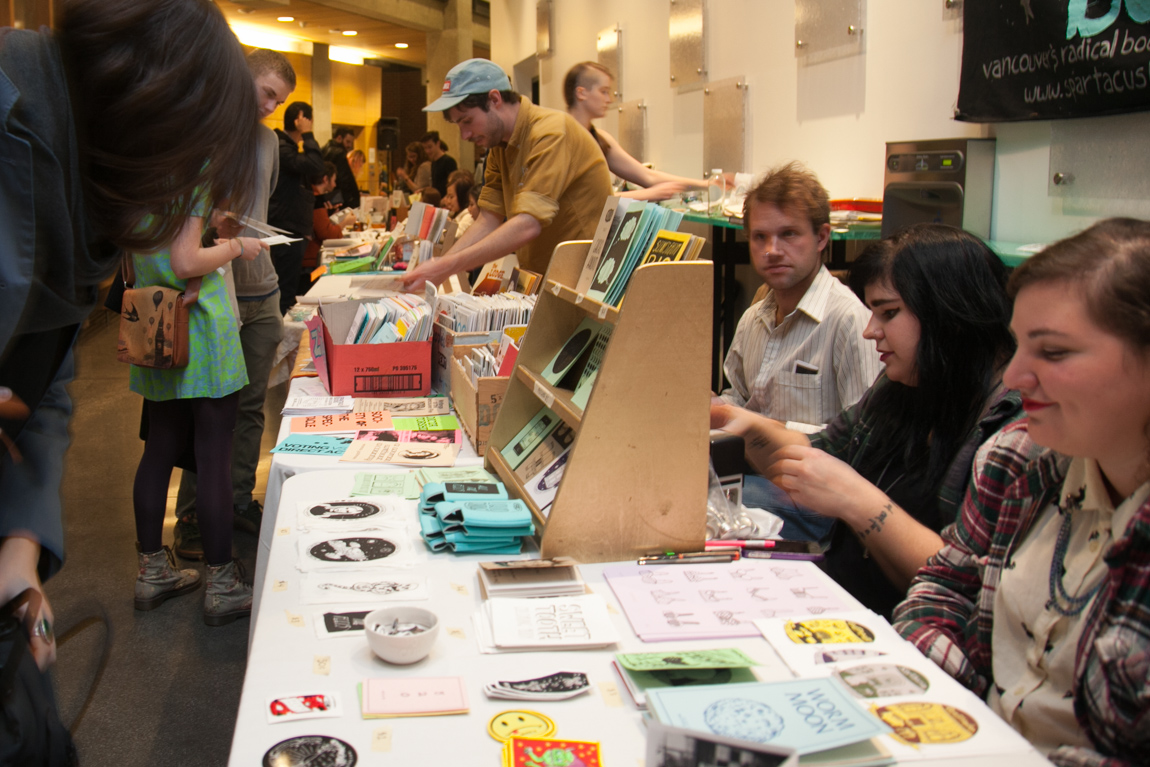 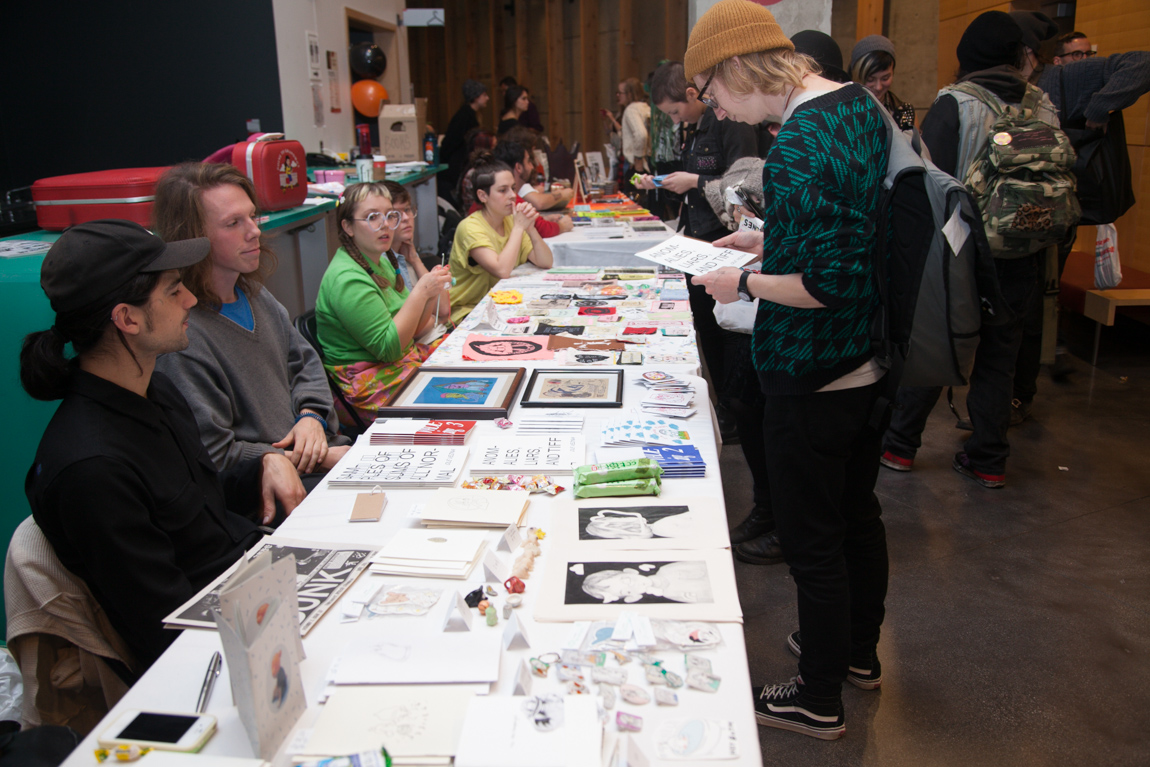 Although the magic of Canzine 2014 is with the vendors, Broken Pencil organizes additional events throughout the festival. This Canzine features a panel discussion From Print to Pixel: Zines as political tools in the digital age, the annual 1-2 Punch Book Pitch, a guest lecture by Mimi Pond, and Radical Reading Series! with local independent press.

1-2 Punch Book Pitch is the Russian Roulette of the independent book world. It has a polarized reputation for both destroying the literary dreams of young authors and encouraging fresh talent. Writers are given exactly two minutes to pitch their concept for a book, and then judges are each allotted one minute to give feedback. Within five minutes, an author knows whether or not they will have success with publishers. Normally that is how the event is run. This year’s 1-2 Punch is slow like molasses. While the writers have brilliant ideas, they are each allowed to pitch for anywhere between 10-15 minutes. Their pitches are less elevator, and more broken elevator. The judge feedback is also extended. Forty-five minutes and only two pitches later, Vandocument sneaks out to explore more tables. 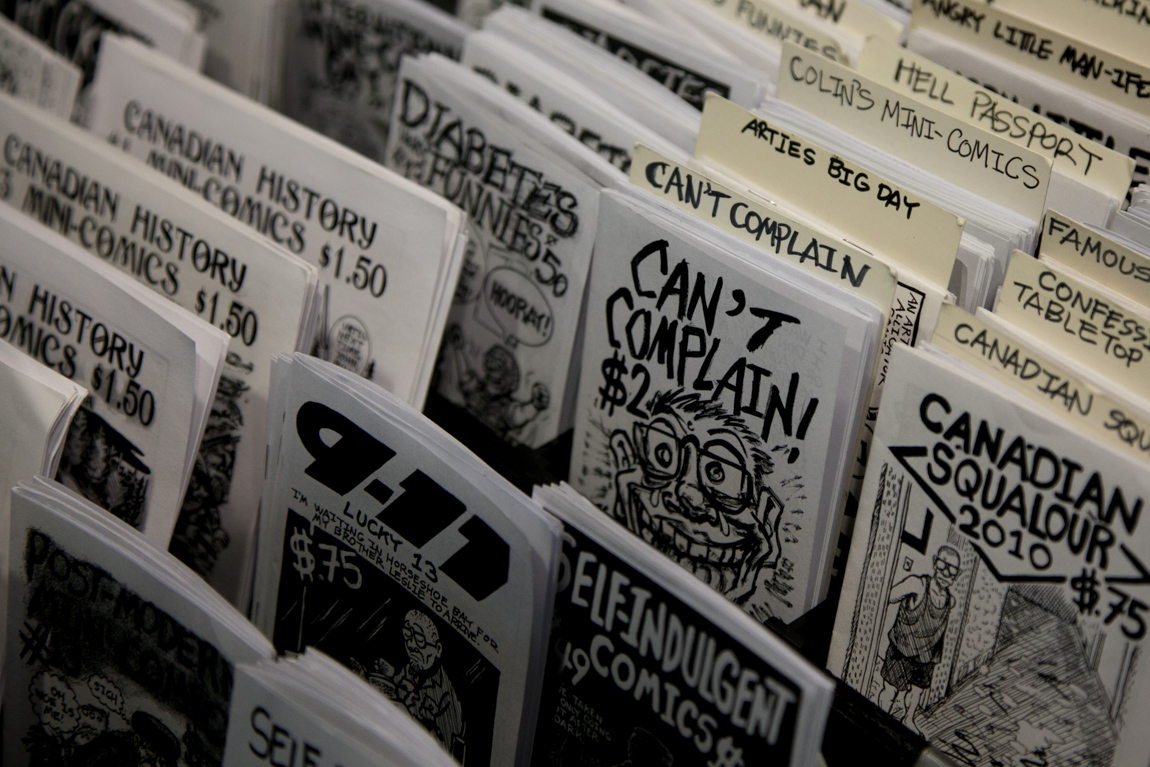 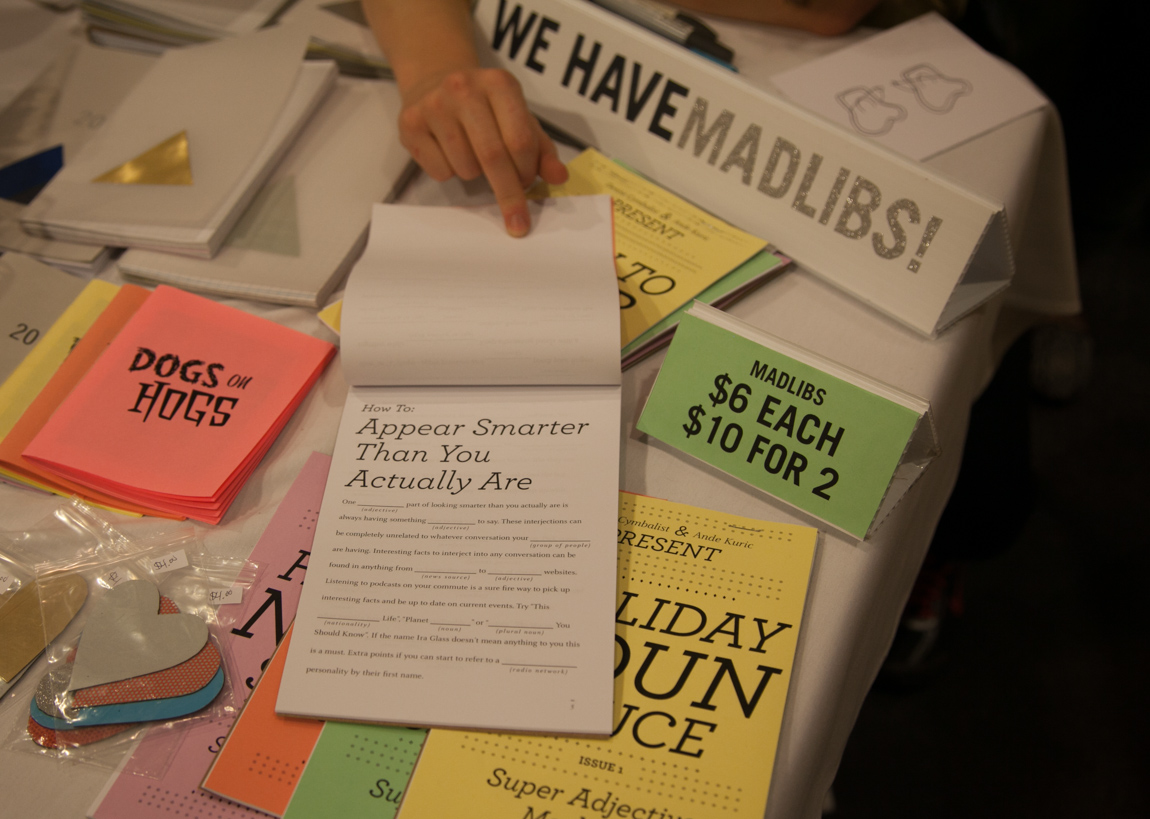 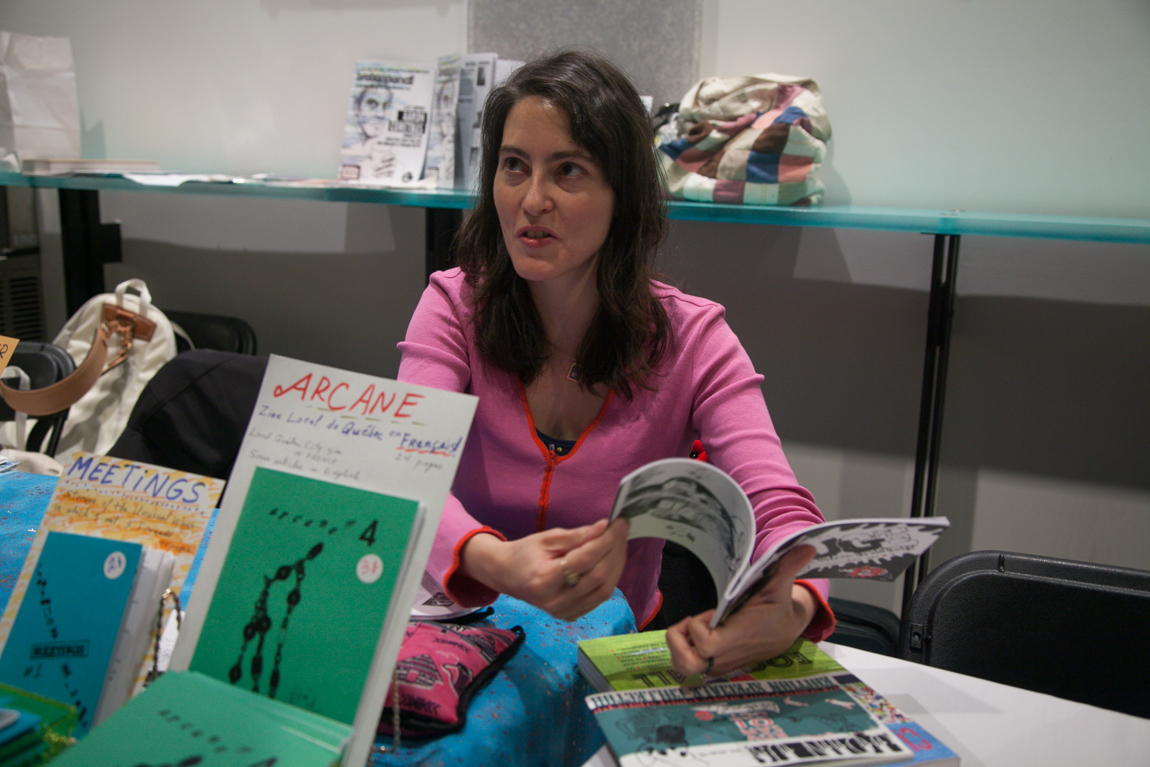 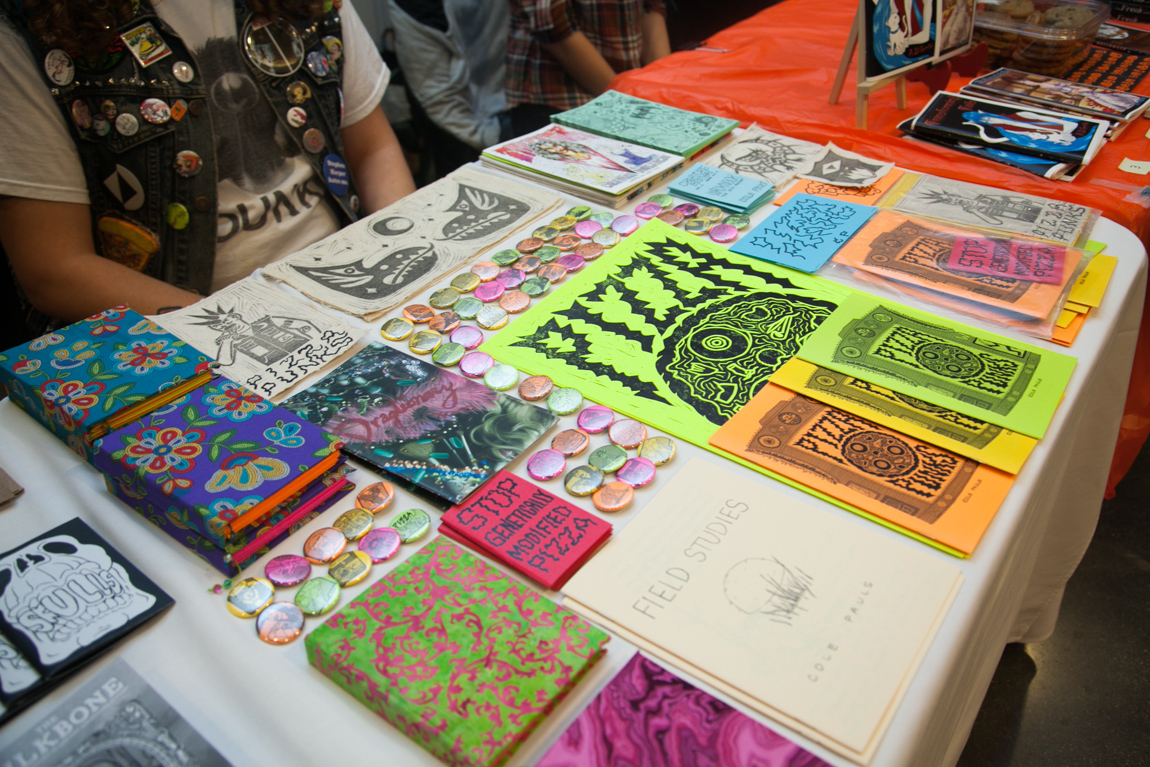 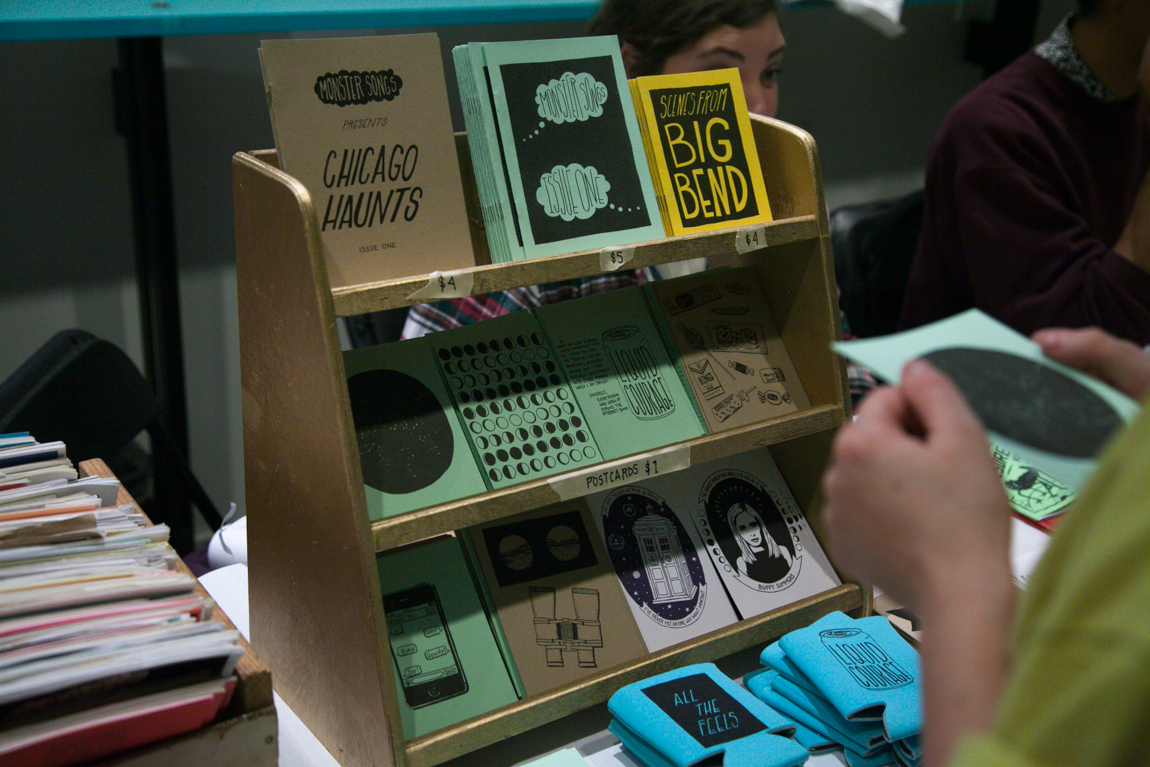 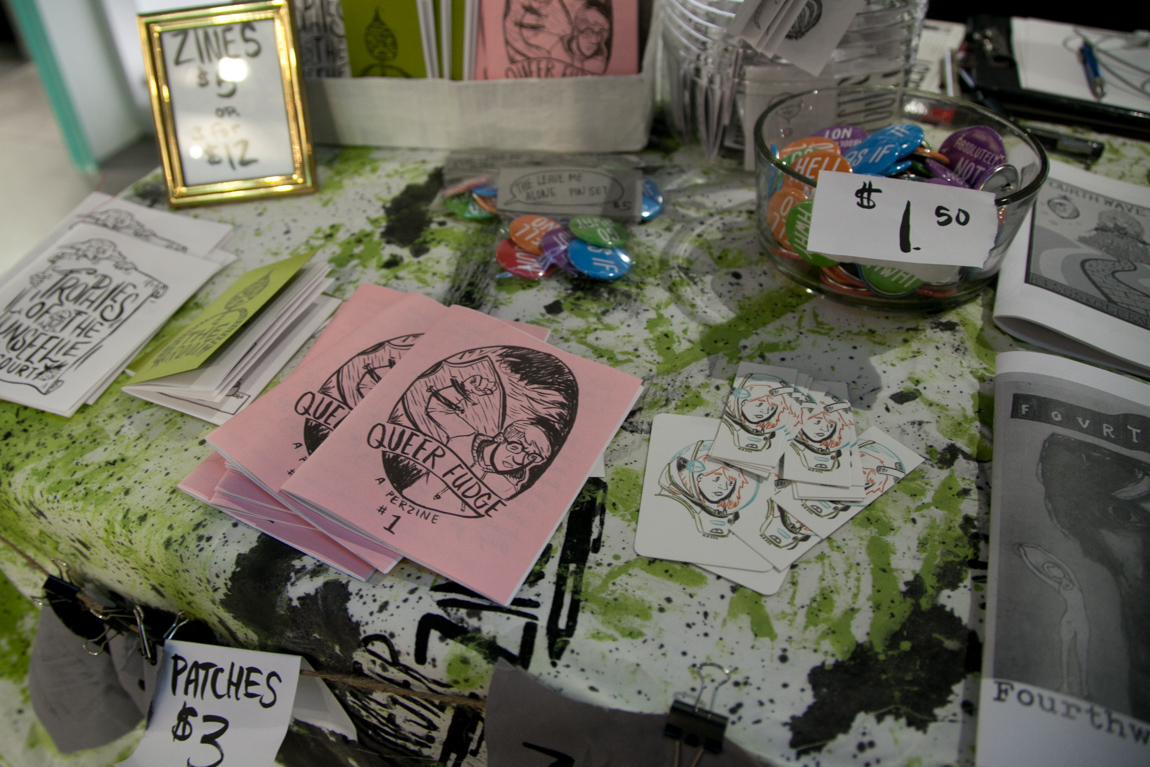 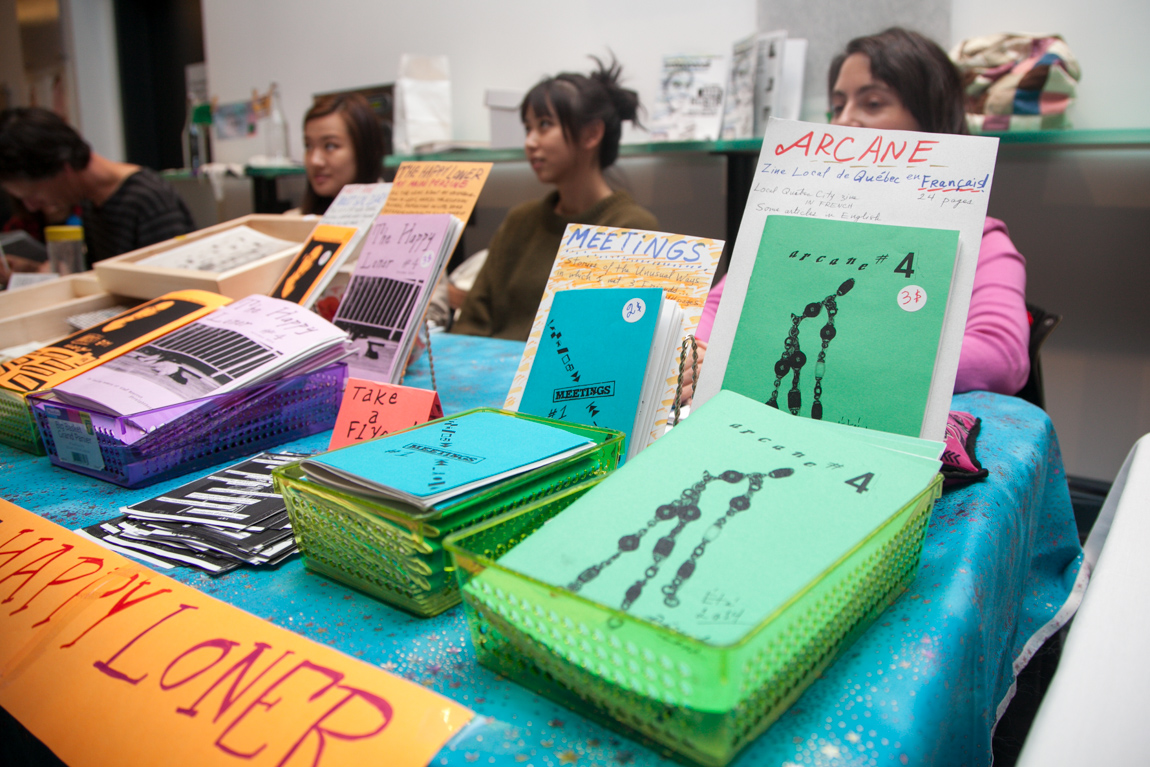 All the suspended excitement of the day leads up to Mimi Pond’s lecture, scheduled for 4pm in the Djavad Mowafaghian Cinema. The event is delayed due to technical difficulties. Thirty minutes pass before the audience is allowed to enter the auditorium. By then, the people waiting outside the doors have turned into a synchronized streak of pacing tigers. At one point they had tried to storm the doors and been rejected by an angry tech team. When the audience finally settles into their seats, it is a triumph. The frustration of the delay is forgotten once Pond takes the podium. 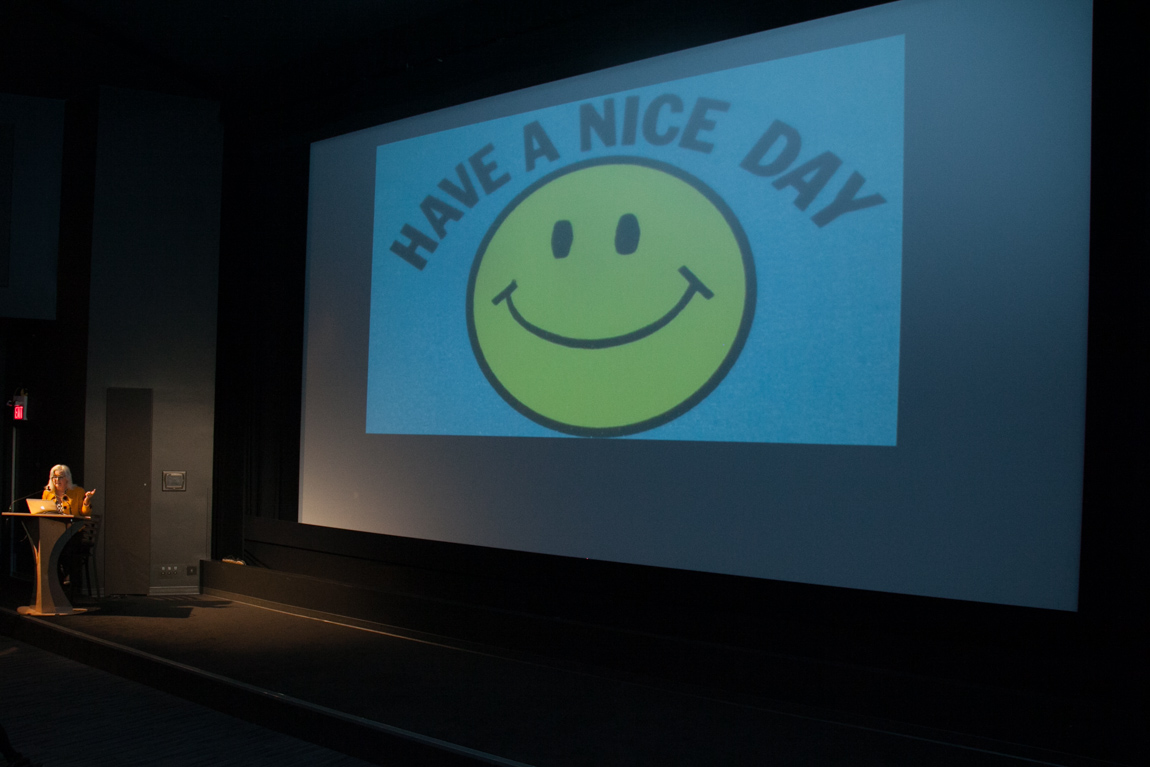 Mimi Pond is, of course, one of the silent, creative influences of modern day pop culture. Based out of LA, Pond was one of the artists on the first episode of The Simpsons, a collaborator on the set of Pee Wee’s Playhouse, and an illustrator for National Lampoon and Seventeen Magazine. Her recent publication, Over Easy is a New York Times Bestseller. It is a semi-autobiographical labor of love depicting her work at Mama’s Royal Cafe in Oakland in the 70’s. The editor of Broken Pencil, Alison Lang, introduces the author. In a memorable testimonial, she states that what took Pond fifteen years to write, only took Lang one night to read.

Pond opens with That 70’s Show, explaining that the current generation has romanticized an era that for her, was traumatic. To provide us more accurate context, Pond shows images of flutists, peace marches, and headlines announcing the breakup of the Beatles and Nixon’s Watergate scandal. A massive photo of Charles Manson is projected, followed by Patti Hearst as a bank robber. All of this, juxtaposed by the plasticized hippie pop music of The Monkees. She explains that 1970’s North America had a misleading exterior facade of being ideologically grounded. In reality, everyone was seeking something to believe in. People turned to crystals, cults or drugs. Oddly enough, this floundering collective conscience can be represented by a fixation on hair, states Pond. She breaks to another video, this time John Travolta as Tony Manero in Saturday Night Fever. And in a mindf**k moment, Pond rapidly switches to a photograph of the cast of Jersey Shore, drawing a parallel between the vanity of the 70’s and now. 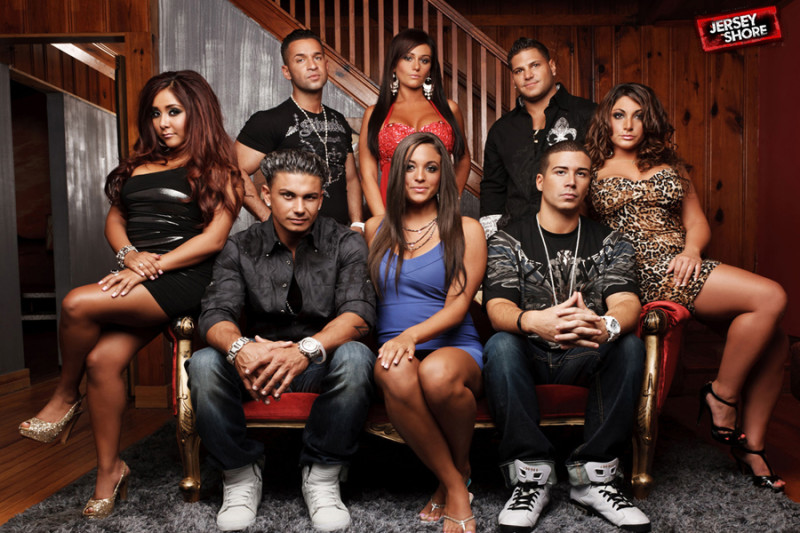 The 1970’s in Oakland predated the mall culture excess of the 80’s. Regulars at Mama’s Royal Cafe wore DIY thrift store fashion, with each style representing a drug of choice. Punks took speed. Hipsters snorted blow. Hippies smoked pot. When it came to drugs or sex between regulars and staff, Pond remembers that “everyone just said yes.” Although the 70’s was celebrated as a time of free love, most ‘free love’ practices were sexually exploitative towards women. Pond remembers being regularly grabbed by male customers at the diner, unable to lash back. Over Easy takes place in this radical, highly sexed yet repressed environment. 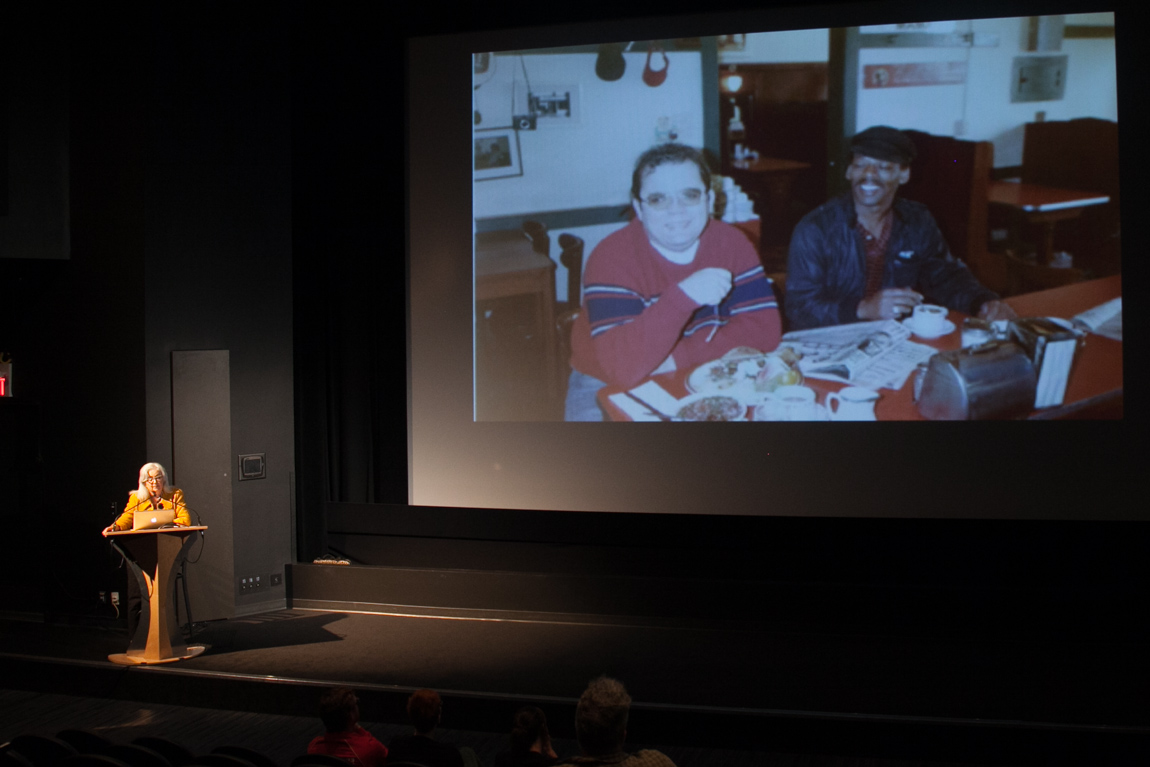 Pond reads from her book accompanied by illustrations. The excerpt depicts Pond’s first dishwashing shift at the diner. Mama’s Royal Cafe becomes Imperial Cafe, and the regulars and staff are transformed into exaggerated characters. The audience laughs and sighs with the slides, reacting to nostalgia. Although Over Easy is set in the 70’s, the experience of being an artist trapped in a restaurant work environment is timelessly relatable.

Over Easy started out as a work of fiction, but was reworked into a graphic novel after repeated rejections by publishers. The story needed visual representation. Once Pond stopped fighting for its publication as a novel, it was immediately welcomed into the literary world as a graphic novel. Readers are ready to accept graphic illustration as literature, not just serialized strips. 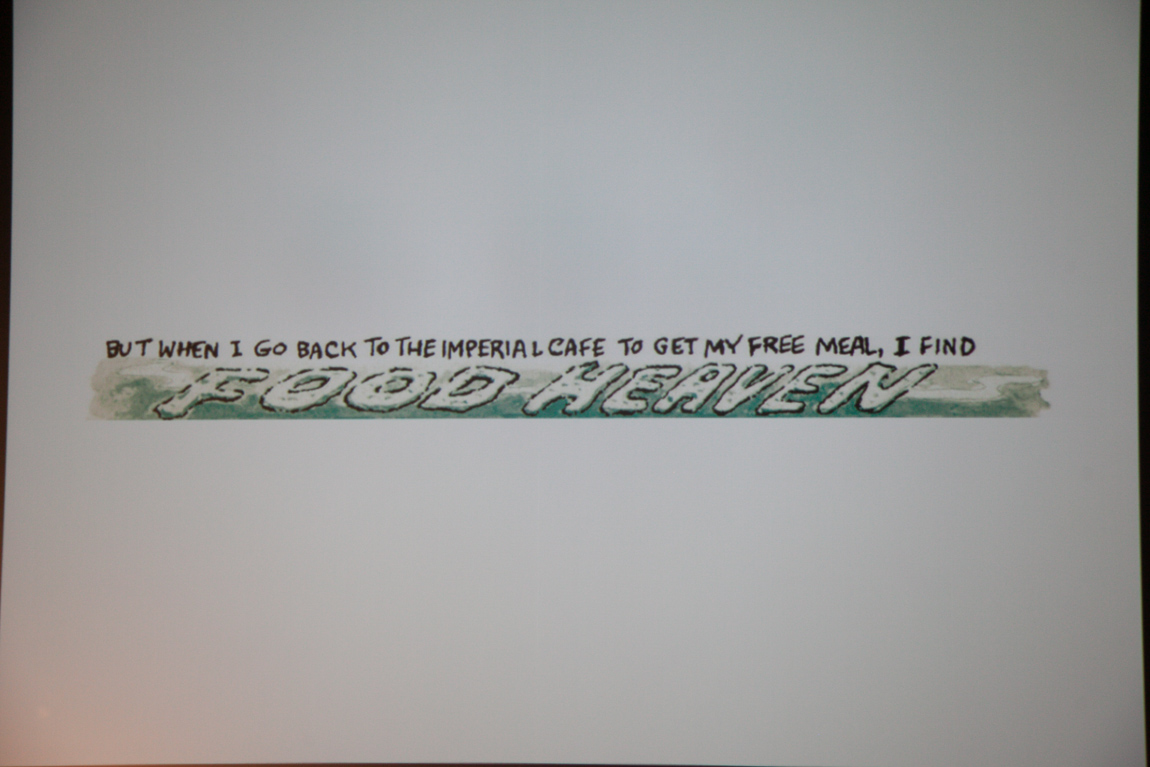 Pond was 22 when she started working at the cafe. However, she didn’t start writing about it until her late 30’s. One audience member asks about this time gap, to which she explains that in her 20’s she “didn’t understand the responsibilities of an adult yet.” Pond had always wanted to do an art piece about the cafe, but it wasn’t until after having her first child that she understood how complex and dark the whole situation had actually been. Time and space gave her a heightened awareness of the lives of the people who worked and hung out at Mama’s Royal Cafe. Pond travelled back to Oakland and tracked down some of the people from Mama’s to collect more stories to include in Over Easy. She found that decades later, most people related back to the 70’s in the same way. Memories were recalled with fondness, but not through rose coloured glasses. 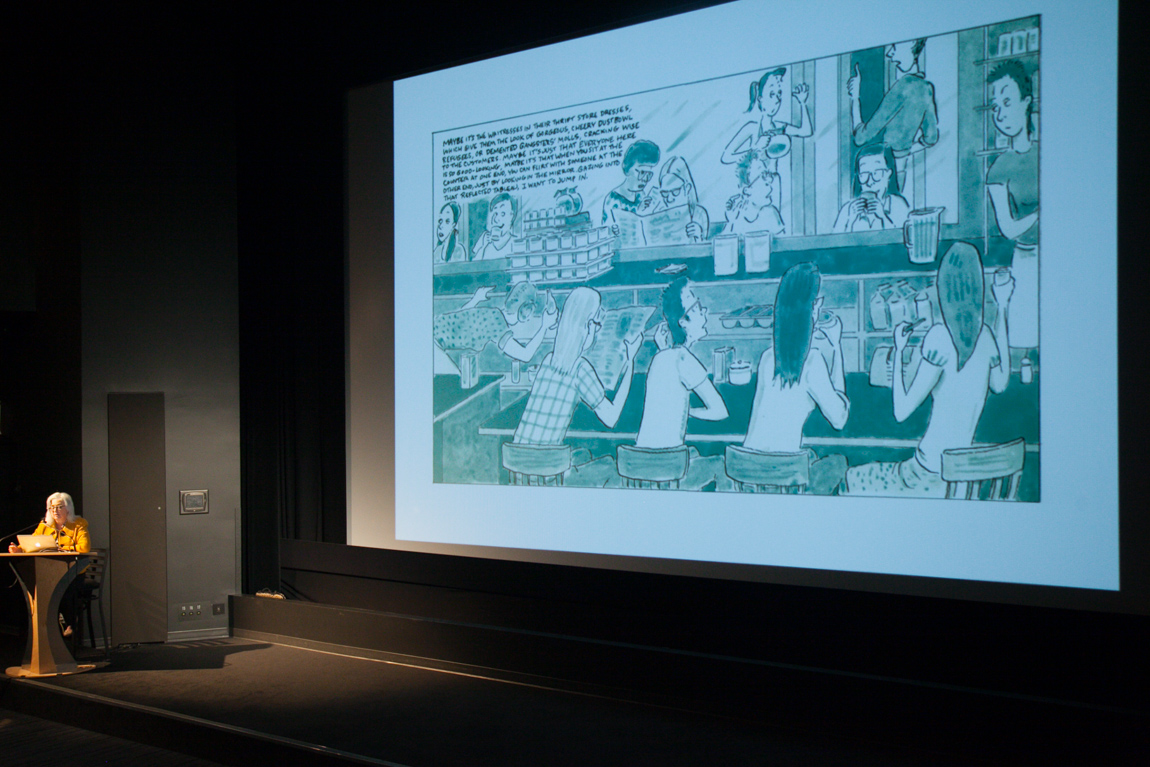 Over Easy depicts a time in Pond’s life that she refers to as “the sand that polishes you into something.” Choosing to be an artist is a constant fight to assert your identity in a world that does not fully value creativity. The art world is sexist, making it especially hard for female artists to make a living. Pond suggests that all artists, especially women, have to be prepared to persevere beyond art school. They have to want to be artists bad enough to become successful. 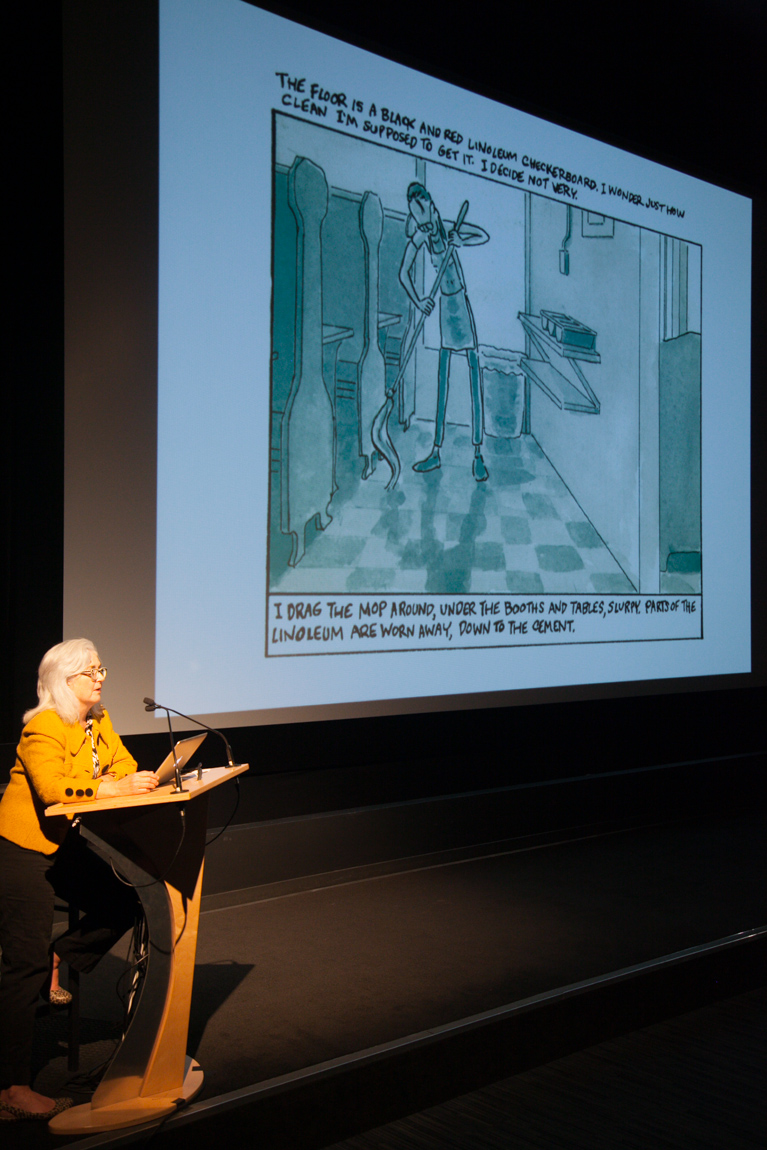 Pond’s talk sheds new perspective on the artists exhibiting at Canzine 2014. As if seeing the vendors with fresh sets of eyes, every young creative suddenly possesses the potential of writing or drawing a New York Times Bestseller. Eavesdropping on the conversations between tables, vendors are constantly discussing ‘day jobs’ with each other. An artist works at a clothing store, while another is a barista. It seems that not much has changed in the artist’s lifecycle since 1970’s Oakland. 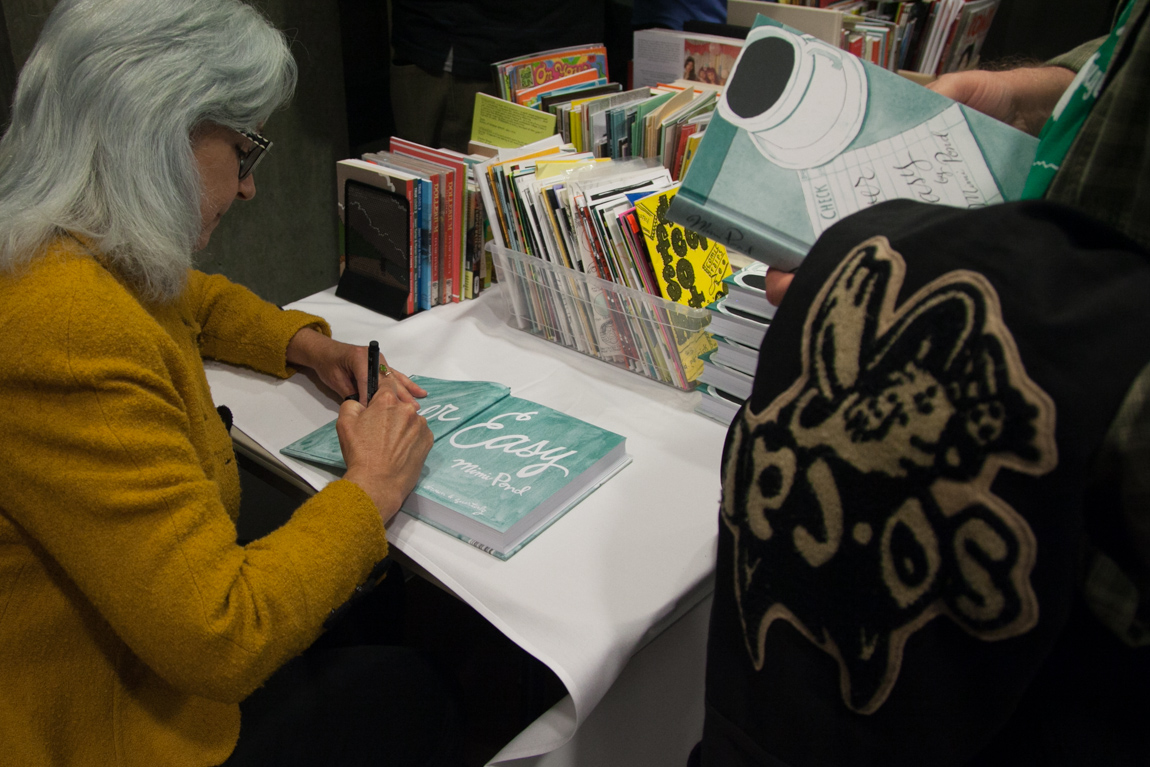 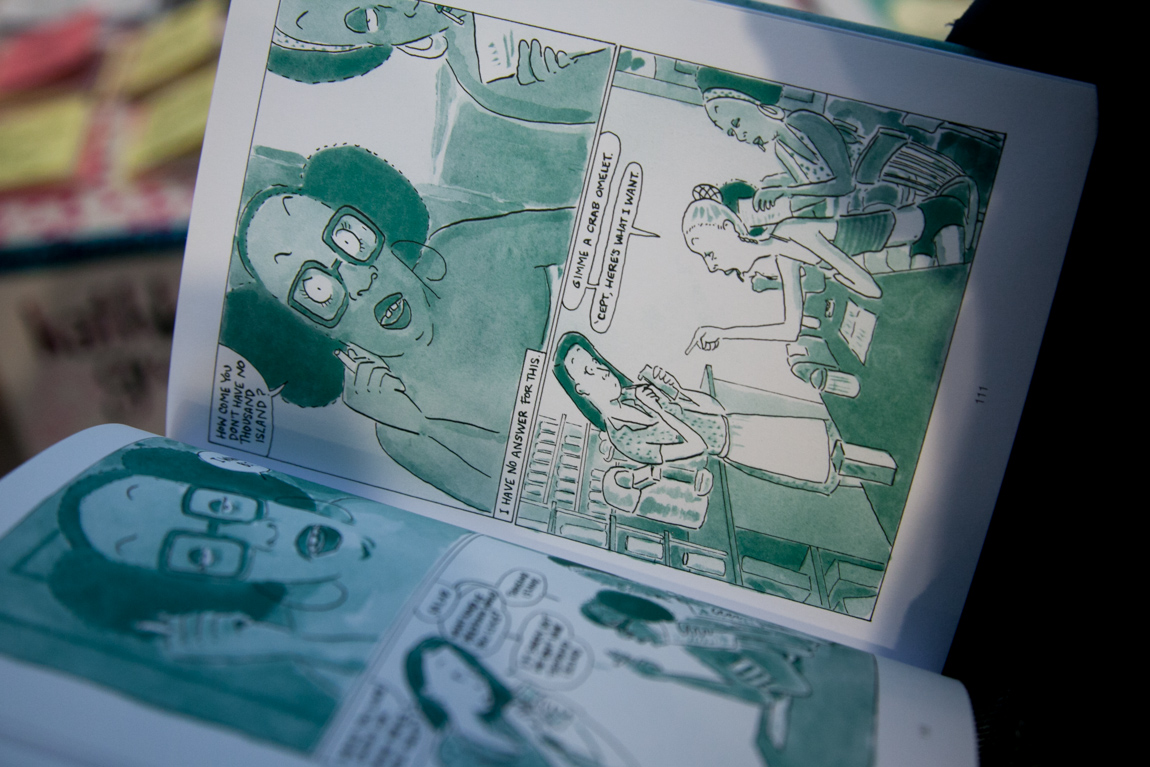 Zines have been increasing in popularity over the last decade. Even so, the culture of zine-making still exists on the periphery of the art cannon. The success of Canzine varies from year to year. Its venue changes each time. What doesn’t change is the enduring sense of community it creates among artists and writers whose practices all start with a simple bookbind. 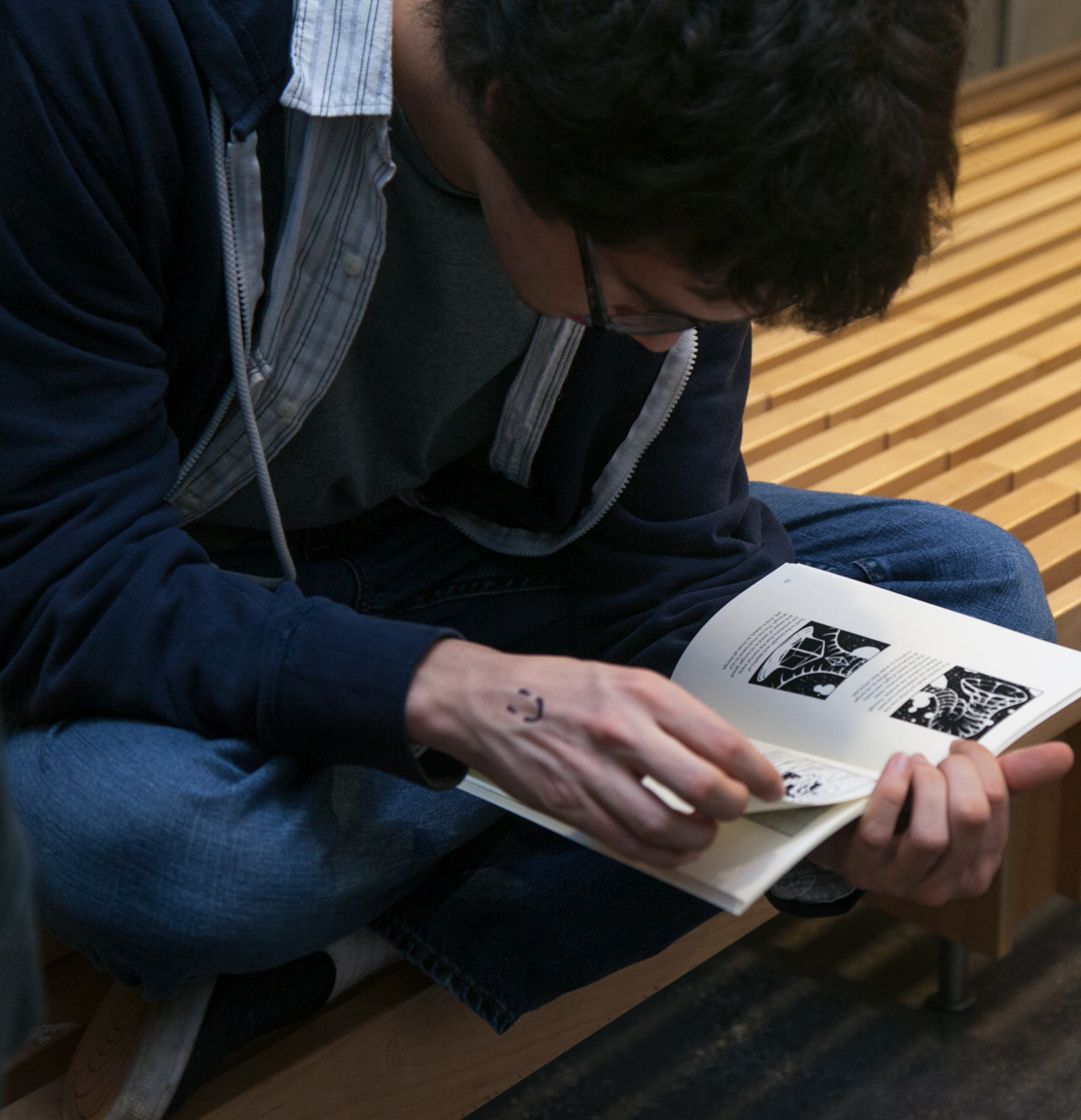 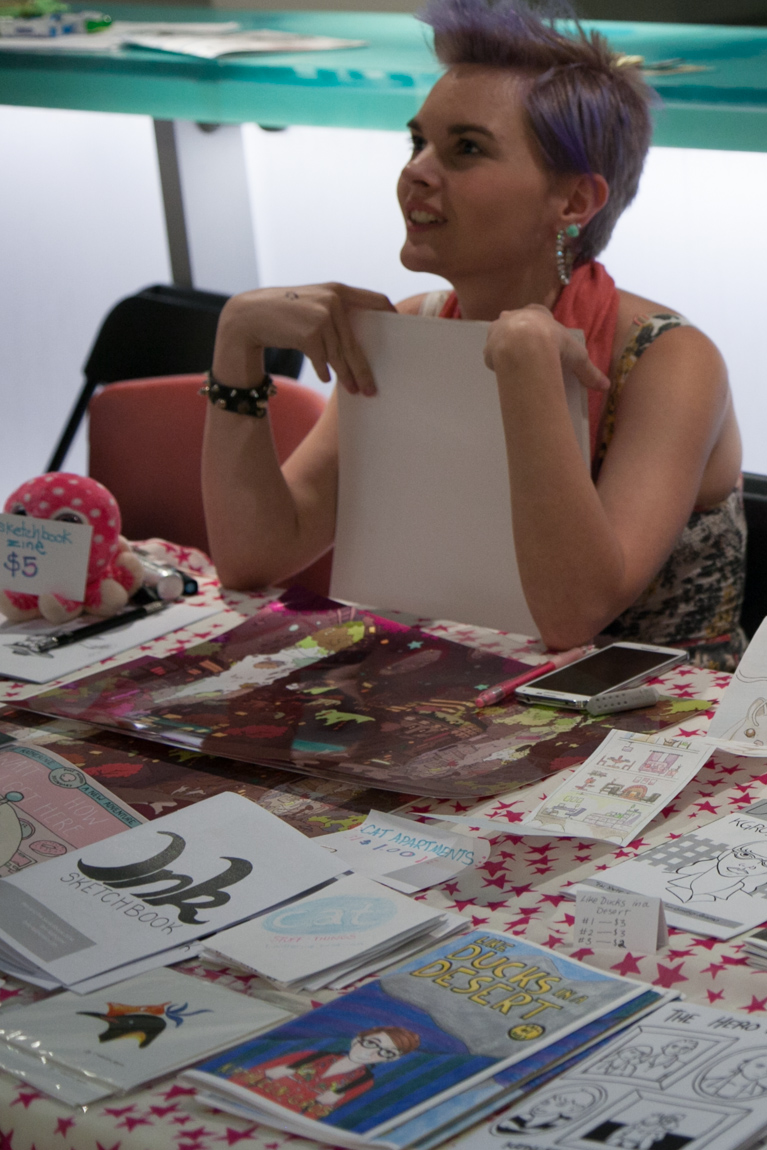 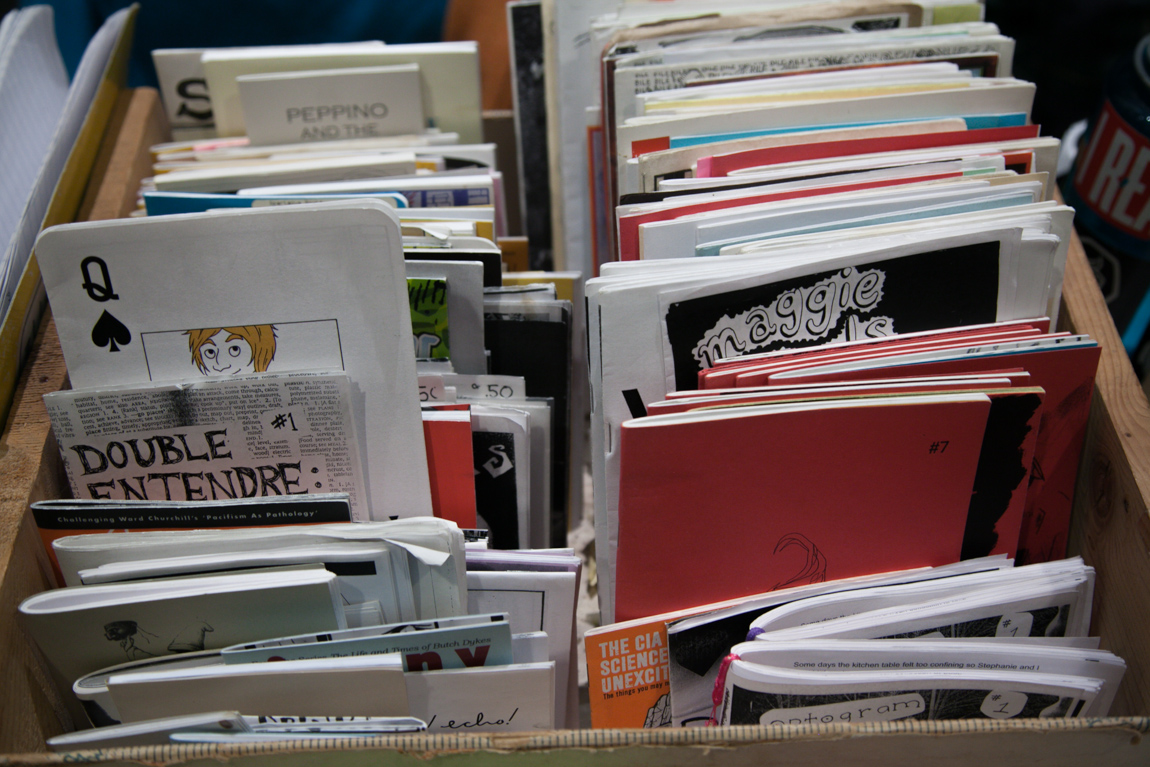 One of the sponsors of Canzine West 2014 is SFU’s Vancity Office of Community Engagement.

Mimi Pond’s profile with Drawn & Quarterly, including upcoming lectures and signings is here. 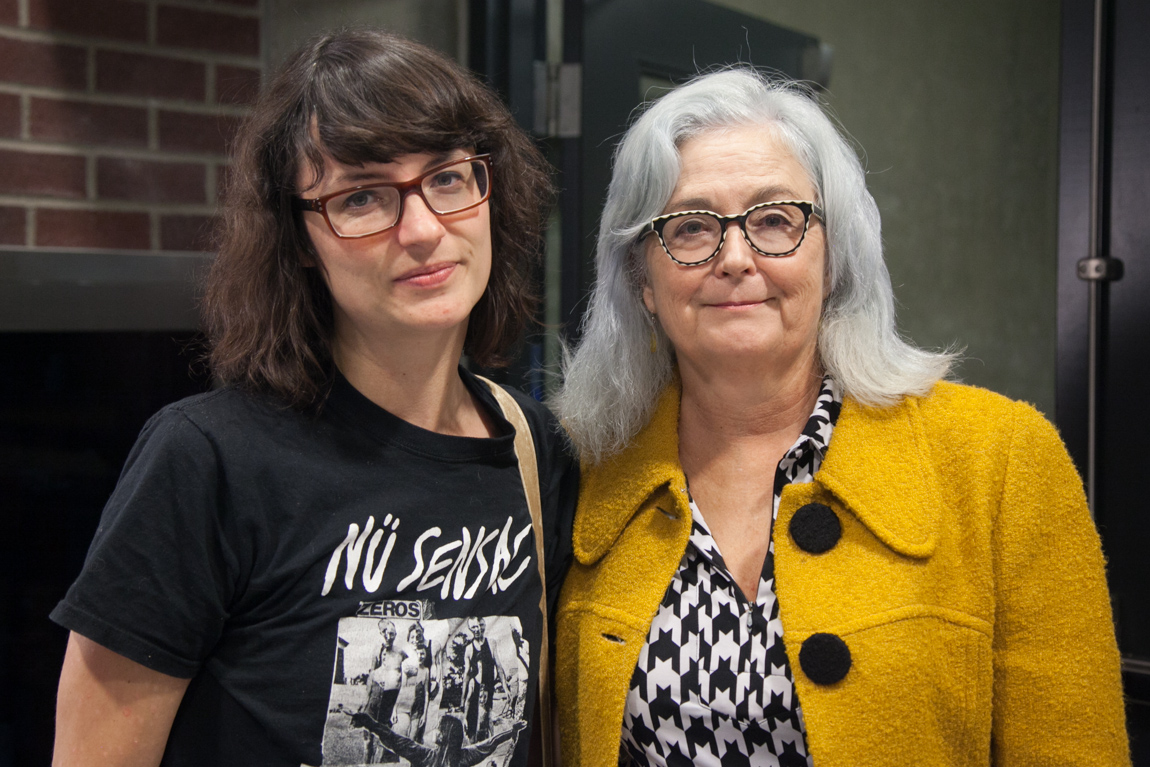