Catherine Falkner Cracks Up The Toast Collective in Space, Baby 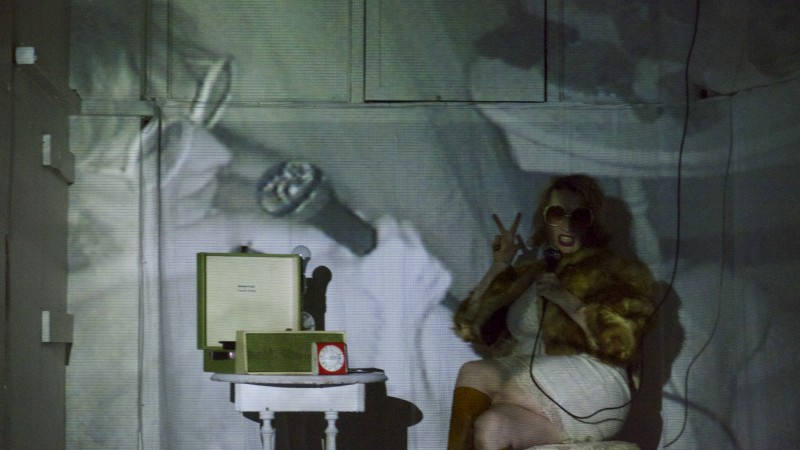 Walking down Kingsway in the early evening across from Robson and McAuley parks, I nearly passed the Toast Collective, a small artists’ space nestled in to the microcosm of storefront businesses at Fraser Street, nearby to neighbourhood icons like the Black Lodge and Les Faux Bourgeois. The windows of the tiny business-turned performance venue were blacked out and if not for the open door and a familiar face standing on the stoop I would’ve had to resort to Google maps to find it.

Space, Baby is a one-woman show written and performed by SFU theatre student Catherine Falkner with help from seasoned media artist Flick Harrison and fellow School for the Contemporary Arts graduates including director Elysse Cheadle and composer Elliot Vaughan. The performance is the product of a three month long directed study initiated by Falkner and overseen by the university exploring the ideas of identity and isolation in the intergalactic future. Suffice to say, this combination was brimming with potential genius in creative entertainment!

Falkner was inspired by Barbarella, the 1960’s sci-fi film made at the height of the space craze in America; a movement that initiated in response to media coverage of NASA’s inception and developments in space travel fuelled by the international race to the Moon. Questions of gender roles along with camp-aesthetics and multimedia technology were also incorporated to produce the 45 minute long event with a slightly psychoanalytical approach to character development of the show’s only star: a bodacious blonde by the name of Fusty Troller.

Greeting me at the door of the Toast Collective was a tall man at a little desk with an array of tinfoil sculptures made into various wearable accessories such as boutonnieres, headpieces and rings created for guests to don. A glance around the sold-out venue elicited an immediate feeling of coziness and excitement, which had been set up much like a living room movie night with floral print sofas and 1960’s kitchen chairs lined up in rows facing the door. The mood was amiable and buzzing with aluminum novelties. I took a front row seat among the crocheted blankets and throw pillows on the floor next to the raised window display-turned-stage and settled in.

The backdrop for the stage was entirely white, where Fusty sat reflecting in profile at a table balanced upon a table, lolling quietly as the audience entered and arranged themselves. Dressed in a Jackie-O inspired white skirtsuit and visible white lace slip complete with a fur stole and matching tan colored go-go boots, Fusty appeared at home in her seemingly private domestic space, admiring her cherry-red manicure and pursing her crimson lips. A conspicuous array of objects surrounded her; an old portable LP player, a lamp — sans shade — , two digital alarm clocks haphazardly strewn about under the table blinking different times, an antique speaker, a hard-shell suitcase and a rigged-up microphone dangling from the ceiling.

The show began when Elysse gave a robotic introduction via mimetic interpretation to a live male voice-over emerging from the PA system, welcoming the guests and inviting them to the post-show karaoke mixer involving Frank Sinatra and YouTube. Her animated smile to finish off the speech harkened 1960’s detergent commercials as her voice, played by Elliot, announced the title of the play with impeccable comedic timing. 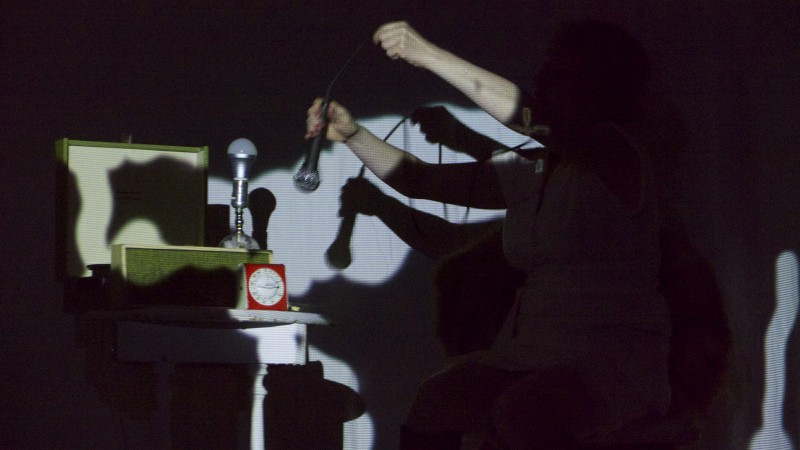 As the lights dimmed a spotlight fell on an egg timer sitting on the table that Fusty proceeded to wind up and set. The spotlight moved across her to the suspended microphone, its round silver globe glistening in the light. As she reached out to the mic and adjusted it, our ears were drawn to the magnified sounds produced by her manipulation of the cords. The room was completely silent. She began dragging the mic slowly across the makeshift stage, a coffee table suspended a foot off of the raised stage at perfect eye level to the audience, in a precarious outlining of the space. I became engrossed in the nuanced sounds of the friction against the ticking of the egg timer as all eyes followed the spectacle of the mic and its every movement. After drawing a careful pathway over each of her boots, the busty Fusty drew our gaze tantalizingly up her legs and into a not-so-sexy exploration of the sounds produced by rubbing the microphone into the fabric and buttons of her dress and abrasively across her teeth, all the while staring challengingly at the audience. The tongue-in-cheek act was exaggerated and drawn out to an uncomfortably slow pace. The crowd remained quiet until a few random outbursts of laughter in the back row broke the seriousness of the action. Unfazed, she continued. After what seemed like eons, the timer went off.

The sound of radio static ensued, as the stage was washed with a starscape of the Milky Way Galaxy. Sounds reminiscent of the original Star Trek took us on a journey to a future reality with blips and bops, beeps and whirs implying space travel that segued the next scene. A computer screen was projected onto the set through a live-feed as Flick the media artist began drawing in Windows paint program onto Fusty. Colours gave way to continents as an image of the Earth was made and then focused into view. The fleeting image then shrunk smaller and smaller, disappearing into the atmosphere, leaving nothing but expansive darkness and a lonely Fusty who rose to see it off. 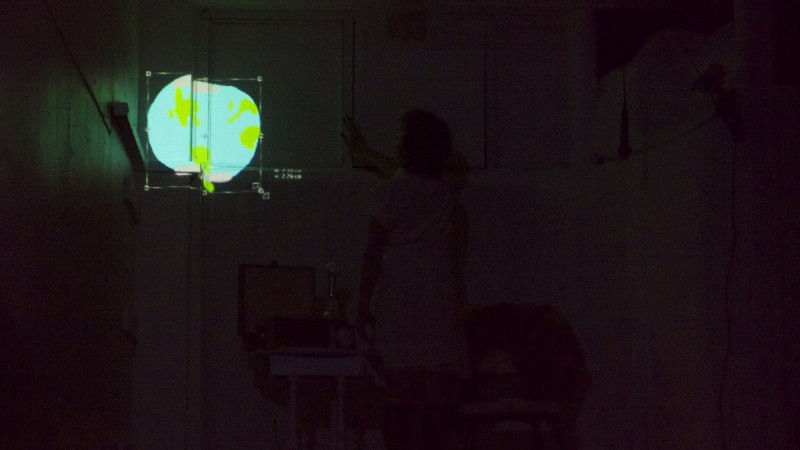 After a solitary moment of reflection Fusty then snapped into action donning a pair of over-sized sunglasses as she took the spotlight with microphone in hand. The stage was transformed into a cross between a cabaret show and a stand-up comedy night. She commanded attention, shouting in a 1960’s New York accent, “Hello! I’m Fusty Troller. I’m Here!” Fusty swaggered momentarily in the limelight, making eyes at members of the audience, her wide grin gleaning. She stood frozen in space until the scoffs and giggles resided, letting a few moments of awkward silence pass before dismissing the intro with grand gesture and then repeating the whole skit over again. And again. She initiated a series of eccentric introductions, each time becoming more creative than the last, that included raising a leg onto the chair and aiming the lamp at her knickers.

The repetition of her efforts escalated into a heated frenzy fueled by recorded samples of laugh tracks and hysterical debates in Italian between two lovers, to which she lip-synced until unable to keep up with the pace. The sound paired famously with the character’s interludes, supporting and then contrasting her manic, compulsive actions by trailing off into psychedelic distortion as voices began to blur and sway. The character seemed to be in a state of process, rehearsing her debut to a rare audience who she desperately wished to please, though confused on which side of her complex persona to display. 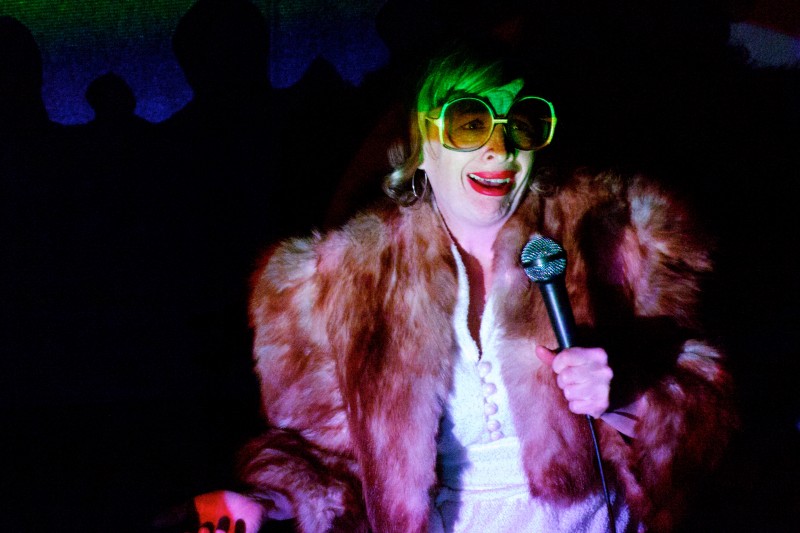 In a nostalgic next scene, Fusty was adorned with a disco floor mosaic of multi-coloured squares that represented photos from her past. She addressed the audience as if we were old friends, reminiscing about each scenario, pausing momentarily for our responses, breaking into fits of laughter and refusing to address some photos all together. After giving an explanation for each photo, she would reach out and touch it on the backdrop and it would then change colour to black accordingly.

The scene was a familiar one that incorporated a layering of contemporary digital practices of archiving images and classic collecting and showcasing of hard-copy photographs. A musical composition supported the scene; a recorded piano solo that revealed the slightly off-key, tragic elegance of the character, giving way to echoes of euphoric sound as Fusty contemplated the memory of her birth. As the checkerboard backdrop became a black holodeck then enlarged into oblivion, our heroine began breathing heavily and contorting as if she were going into labour. When she shrieked and leaned back with her legs spread toward me, I feared for the worst, but her white dress then became the projection screen as the image of a man — Falkner dressed in drag as the male version of Fusty — came climbing out of a point on her belly. The absurdity of the scene was equally vulgar and hilariously funny, which sparked a nostalgic monologue of how she began as a mere twinkle in her father’s eye, ending with a disturbing line about the reality of what we are left with in life, “teeth and bones.”

Notably, the most novel use of space was when Fusty shared her most private thoughts from inside her open suitcase. A live camera feed was projected onto the outside of the suitcase as she bent into it, hiding from the audience and speaking into an antique handheld mirror amongst a makeshift nest of fur. The speech that began as a sort of secret agent reporting for duty quickly became a diary entry of self-reflexive confessions and regrets. 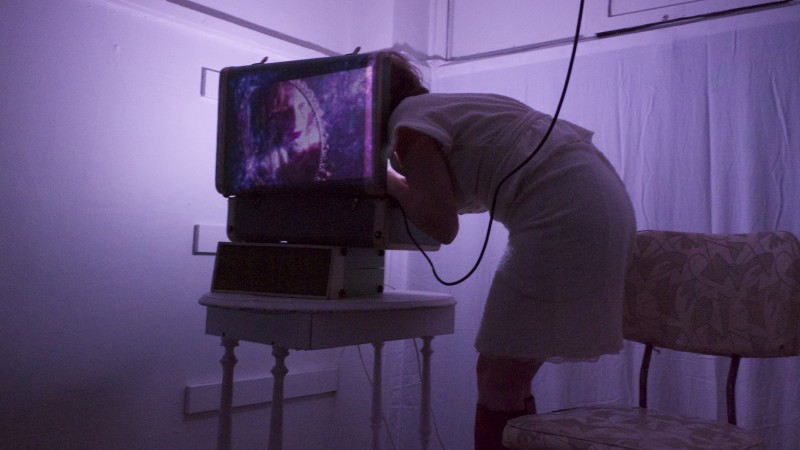 Although the use of abstraction and technology made the performance a truly contemporary piece of theatre, at times side-splittingly comedic, the fragmented text exposed a timeless narrative revealing a character tragically removed from the present, that longs for wholeness and is nostalgic of a former existence. Space, Baby speaks to the appeal of alternate realities, yet begs the question of our motivations behind escapism. With an exceptional crew aboard her ship, Falkner led us on a voyage through the psyche, teeming with campy cliché and dynamic devising with a touch of pizzazz only to discover the sobering truths of phenomenological existence. But hey, that’s Space, Baby.

Jen Dunford is an emerging artist in the Vancouver community. She graduated from SFU with a BFA in Contemporary Dance and works actively in preserving culture through art, creative writing and performance.