Looking Back to Move Forward

Gallery 295 continues it’s intriguing emergence as a space for photography within Vancouver’s arts scene with Locate, an exhibit curated by Emily Carr University alumni Avalon Mott. This show is 295’s first Annual Emerging Curator’s Show, and from the moment I walked in I was happy because I was faced with straight-up photography. 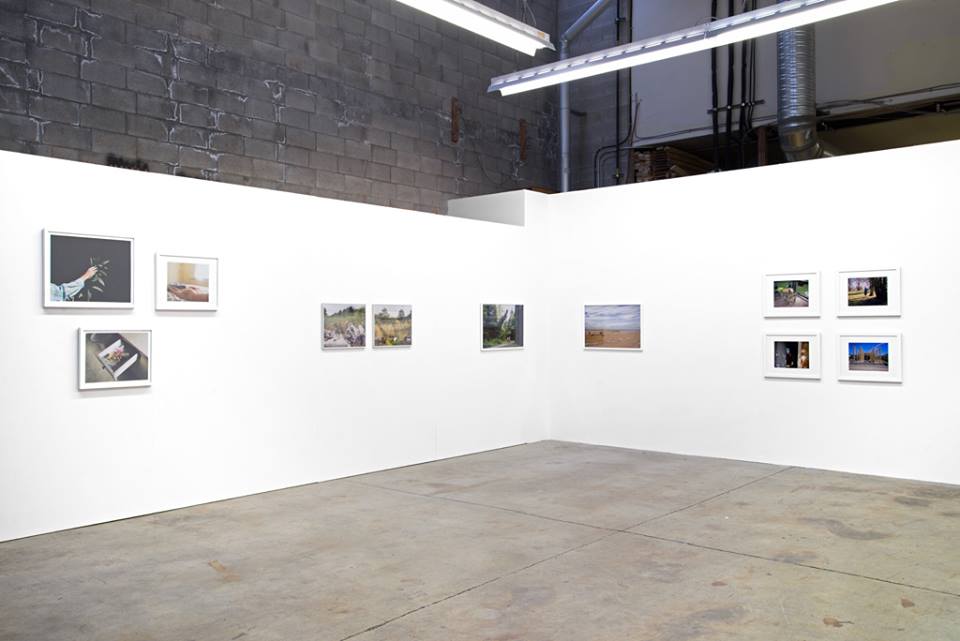 As someone with a deep set passion for photography, I sometimes find myself frustrated by the amount of artists who claim a space within photography by using the medium in their process, yet seem to also be ignorant of much of the history of the medium. I also feel that photographers often feel the need to show experimentation when exhibiting work within a gallery space, using tricks to create effects or distract from the subjects and stories they mean to show. What this results in is often poorly produced images with some technical twist or malfunction being the focus of the work rather than the subject of the image. I am sure there are people who will disagree, but for me the visual stories presented within photographs, rather than technical or conceptual considerations around what a photograph is, are more intrinsically important to the ongoing cultural value of photographic images.

A new exhibit, What Is A Photograph? at the International Centre for Photography (ICP) is about to explore this very subject and it will be interesting to see the response it generates. Personally, I have always been attracted to photography due to its ability to weave stories through the visual recording of the world. It often disheartens me when photographers ignore or lose track of this element of the practice. So when I go into a gallery and see beautifully produced photographic prints hung on the walls picturing observations of the world we inhabit, my heart skips a little from the basic joy I get from looking at photographs.

The premise for Locate is “to explore the ideas of place” through “the binary notions of transience and permanence.” I think this is a very current idea within landscape and vernacular photography as a whole and a great subject for a city such as Vancouver, a city that seems to be in an ongoing state of transition through it’s ongoing development and regeneration and/or gentrification.

To be blunt, there is nothing groundbreaking in Locate. No one artist seems to shine, and no one set of images demands attention more than the others. But saying that, the photographs shown are all visually captivating, all contain narrative and portray a vision of beauty. And there is variety as each photographer, though young and still establishing themselves and their visual style, has a very different vision to those around them. 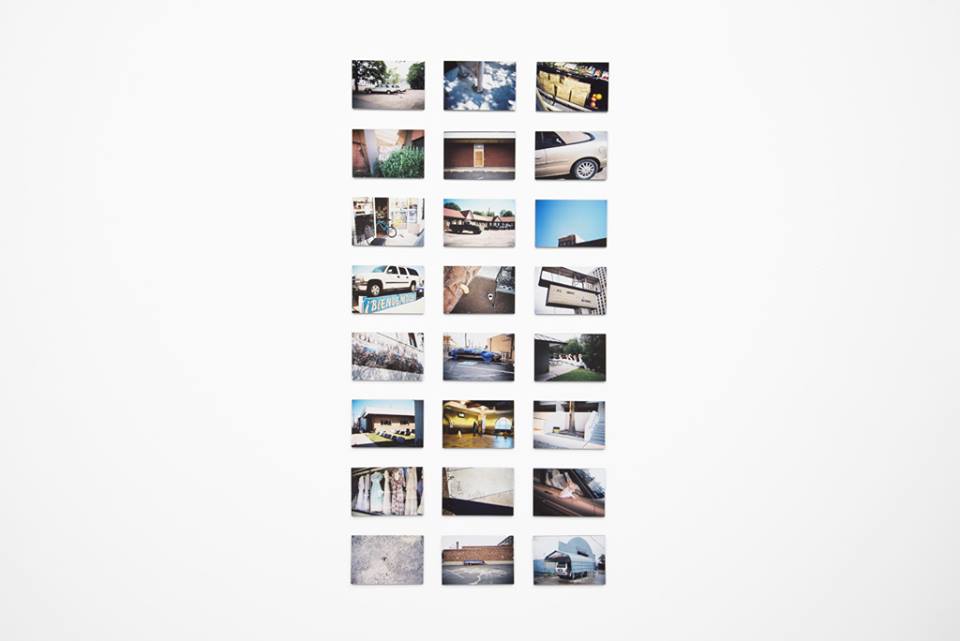 I think the real success of Locate is that we are taken on a journey by the images shown: Shannon McCubbin’s grid of small 6”X4” colour images take us on a road trip from nowhere in particular to nowhere in particular but chart the world seen and experienced along the way. I am interested in why certain occurrences seemingly make themselves seem more visible, or important than others to our eyes, and I feel McCubbin is allowing her vision being pushed and pulled by the world around her. 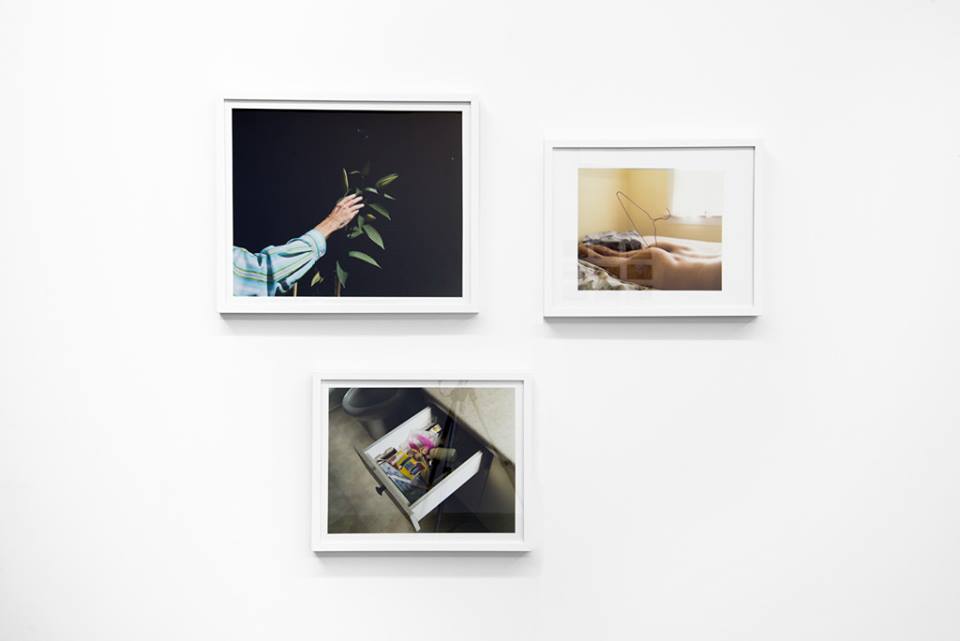 Jeff Downer’s work takes us inside to describe an interior place both mundane yet peculiar. A bathroom drawer with a troll tucked amongst more recognisable paraphernalia, the bottom two-thirds of a male torso with a coat hanger protruding from the buttocks. There is normality and a twist of strangeness. 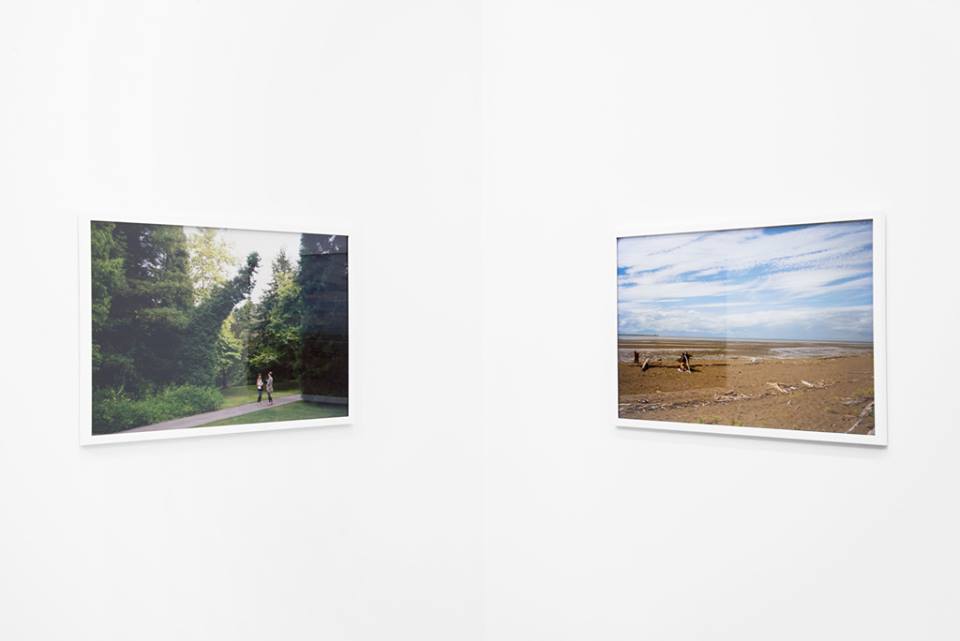 Andy Jenkins shows two scenes, one of a park with two young women talking and one of Iona beach with a lone man half sunbathing, half sheltering from the sun. They way the images are set up, adjacent to each stresses a link between the images, yet quite what that is I am not sure. 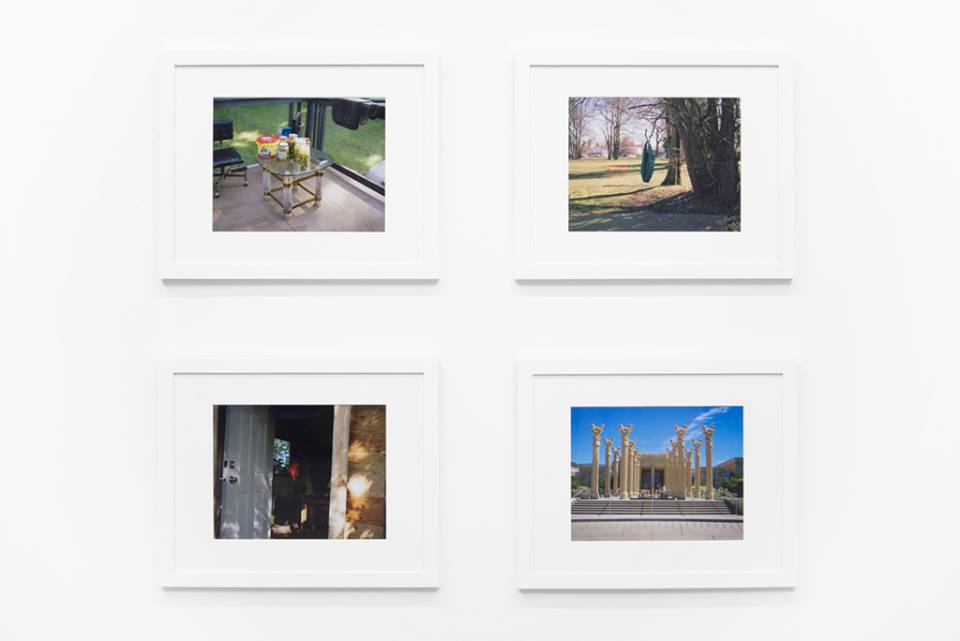 Bahar Habibi’s work seems to let the viewer in on a secret, but without fully explaining what that secret is. Her four images left me feeling strangely unsettled by their familiarity but also by their lack of clear statement. 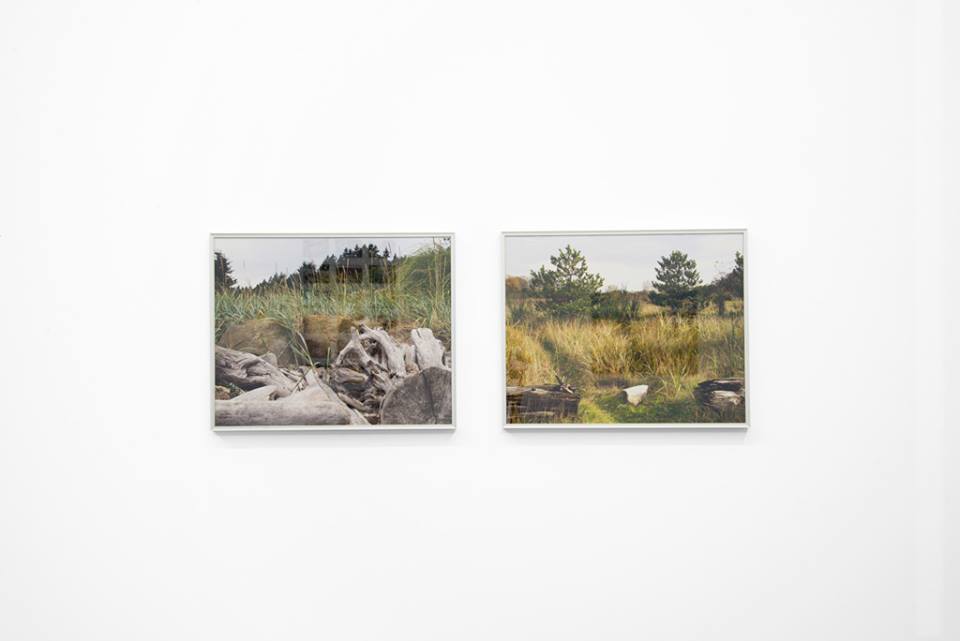 Mott’s two pieces seem to encourage a form of drifting into a landscape. One in particular seems to offer the traces of a pathway which the eye can follow in to landscape shown. 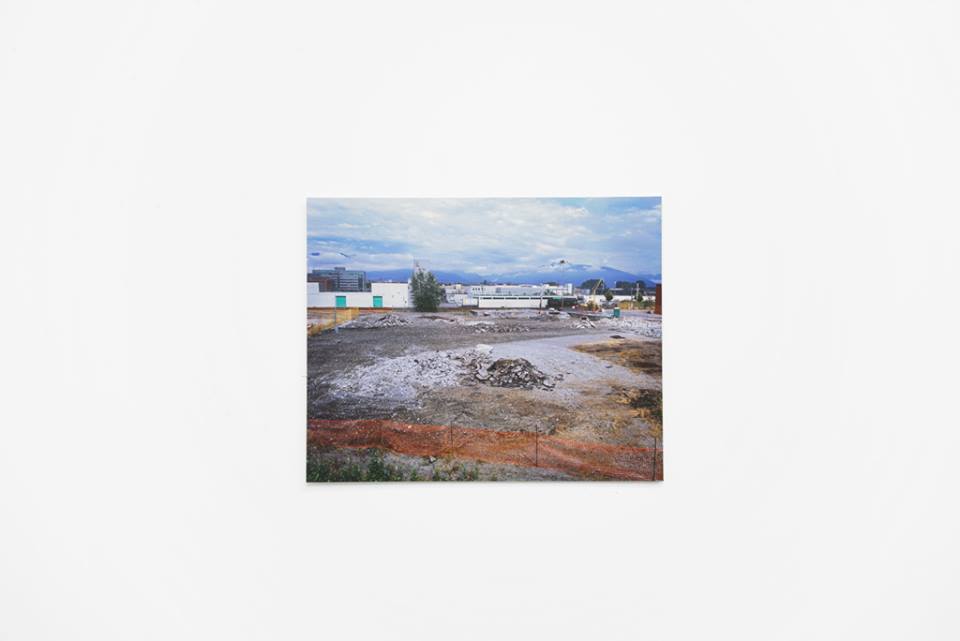 David Peters is a single image taken in the industrial area of Great Northern Way. The image seems to show a wasteland within the city, where the remnants of what was are left to decompose. 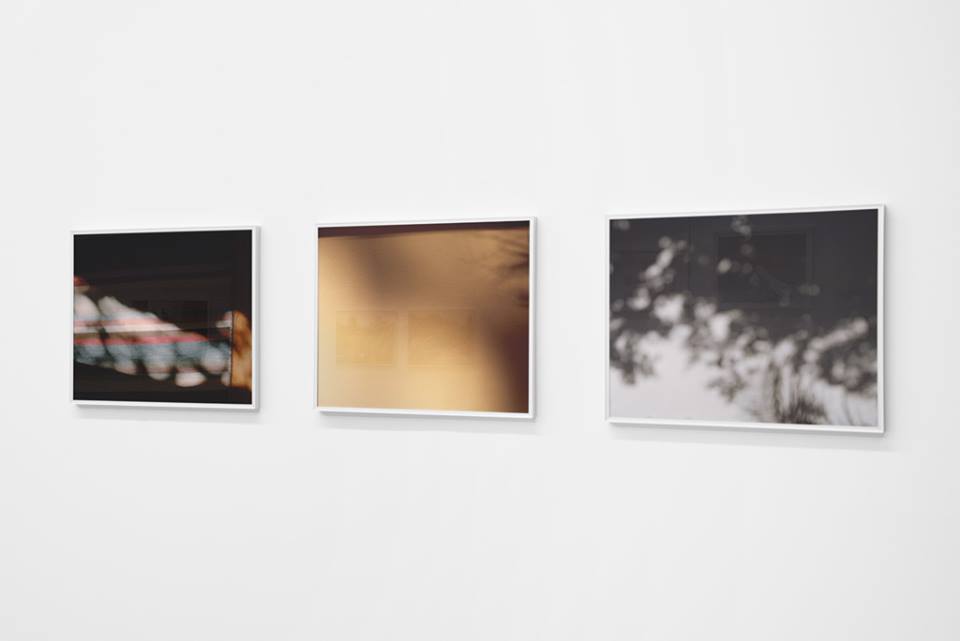 Lastly is Tess Sereda’s work. These images stood out the most to me. They are very simple recordings of light at play, yet one in particular, of what appears to be a rug, is quite stunning with it’s recording of texture and the subtleties in contrast and shadow details. They remind me of being a small child napping in the afternoon sunlight streaming in on my parents’ living room floor. In this one image I feel like I am fully taken somewhere where the others are trying to lead me.

All of these photographers have presented their work almost conservatively; a print in a frame on a white wall. I enjoy seeing photographers explore and discover their locales through the rectangular frame of the viewfinder. There is something wonderful about exploring the mundane surroundings we constantly inhabit and then giving voice to this vision through a photograph. In a time when the quantity of images being produced and published through digital media is leading to questions about the value of the photograph, it is good to see young, emerging image-makers asserting a belief in the value of the photographic image in order to express how the world appears to them and their interactions with this visual world.

I think when someone stops for that moment and actually looks again at the absurdity of the everyday, but also it’s beauty and delicacy, then great images are made. And in this something slightly profound happens and our immediate surroundings become just a little bit magical. And I think we all need a little magic in our lives from time to time.