Two Birds on A Wire and Hoof

An evening of birds and beasts at The Russian Hall

It’s an overcast evening of spitting rain. There wasn’t time to go home so I’m quickly stuffing my face at Pizzeria Farina on Main Street. Zydeco plays overhead. A pajama’d man walks out with a balanced stack of 4 pizzas. A couple to my left discusses hitchhiking. A man outside beats the music’s pulse on his chest. In my haste I spill hot pizza sauce on my cheek; there’s not enough space and I elbow the hitchhiker in the back. Time is smashing up against itself as usual and my iPhone battery is almost dead.

On my bike, the air tells me we’re on the heels of Fall. I’m on my way to see the double bill Psyche Theatre’s Two Birds on A Wire and Elysse Cheadle’s Hoof at The Russian Hall. It’s one of my favourite venues in town, East Van’s beloved low-rent black box. You never know how any given company will configure the space, and that’s thrilling.

Aryo Khakpour smokes a cigarette outside while chatting with friends. I receive two hugs before even hitting the check in table. Sliding scale as you can afford, $10-$20. Kaylin Metchie, the writer and producer of Two Birds, runs the table in a white blouse with galloping horses (a nod of solidarity to her co-producer Elysee Cheadle). Elliot Vaughan, the composer and dramaturge for Hoof, must catch his mom to thank her for bringing muffins. David Byrne in on the speakers and a huge smile spreads across my face.

It’s a lively audience of friends and family. They know each other. We sit in school chairs: 5 rows of 8 creating a small island in space. The only lights I see are four PAR Cans on stands. Lots of excited conversation. “What do you do?” “For Money? Busking obviously…” I hear the punctuated clank of the tip jar from the bar.

The flock and then the herd: the program denotes a heavily weighted team of SFU students and grads, a homogenous team with eclectic disciplines.

TWO BIRDS ON A WIRE

Party tunes, party hats, party streamers. “Happy Birthday” leans at a slant on the brick wall behind the designated performance zone. The plastic tablecloth is set with juice boxes, Doritos and a partially eaten cake. I think of innocent skittles and chips sleepover parties. A birthday girl, in a tiara and pink gown, sits by her gifts wrapped in gold. She wears aqua nail polish. She waits for something in an uncertain state. A moment of meditation. It’s DIY, sweet and simple. There’s a buzz from the creative team as they bring their new works to an audience for the first time. They grab more chairs to expand the house.

Elysse Cheadle pulls a chair by the power outlet on the side wall. I hope this means she’s Lighting Op. My wish comes true as she unplugs the lights from the wall and the house goes dark. My favourite theatre is make-it-work-with-what-you-got-theatre and this is perfect.

Immediate nostalgia as lights come up on the birthday party. “Time After Time” plays. Pastel dresses. Slow dances. The bundles of teenage neuroses are waiting for that kiss. A meter stick between the awkward couple. Who’s party is it we ask and then their questions begin. Their rhythmic banter, pitter patter. 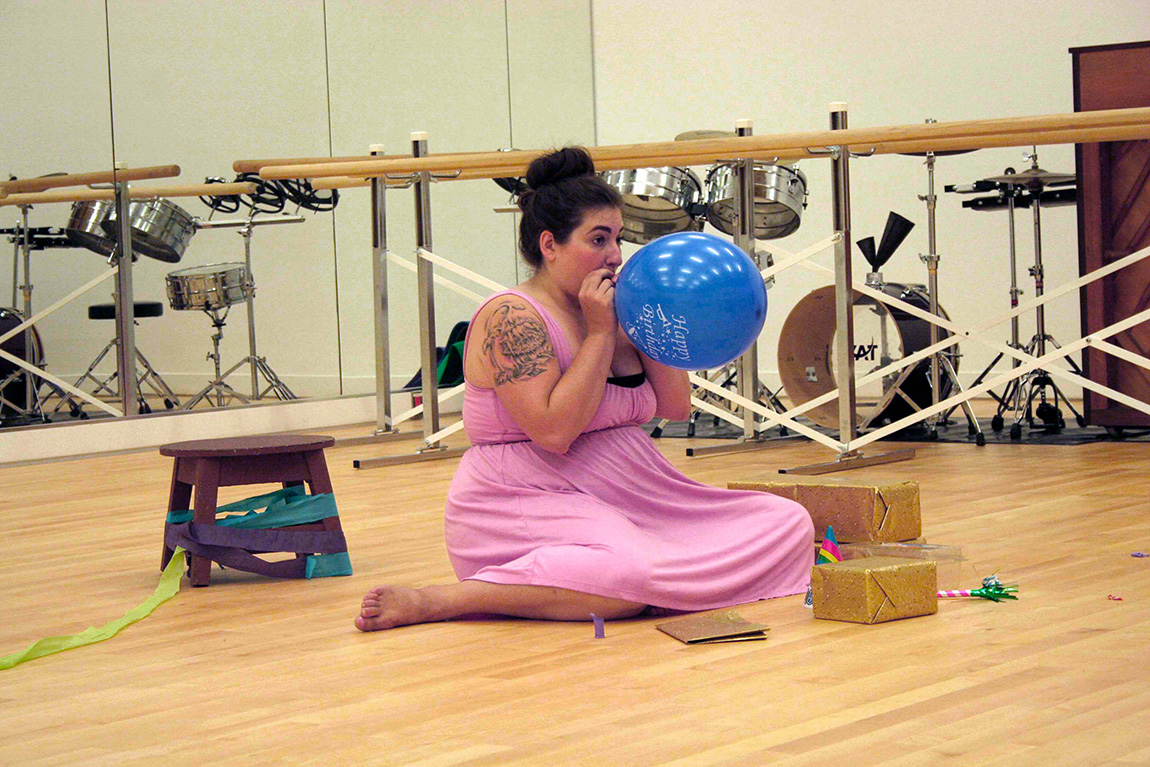 The birthday girl blows a yellow balloon. Juice boxes and crinkle paper. The yellow balloon floats to the floor, she stretches a pink one. Simple questions expand. A dream, an omen, a river. Like breath. Someone holds a monopoly on the dreaming industry. She’s Optimist, he’s Pessimist. So many balloons to fill. She says she dreams of flying, which he finds boring. 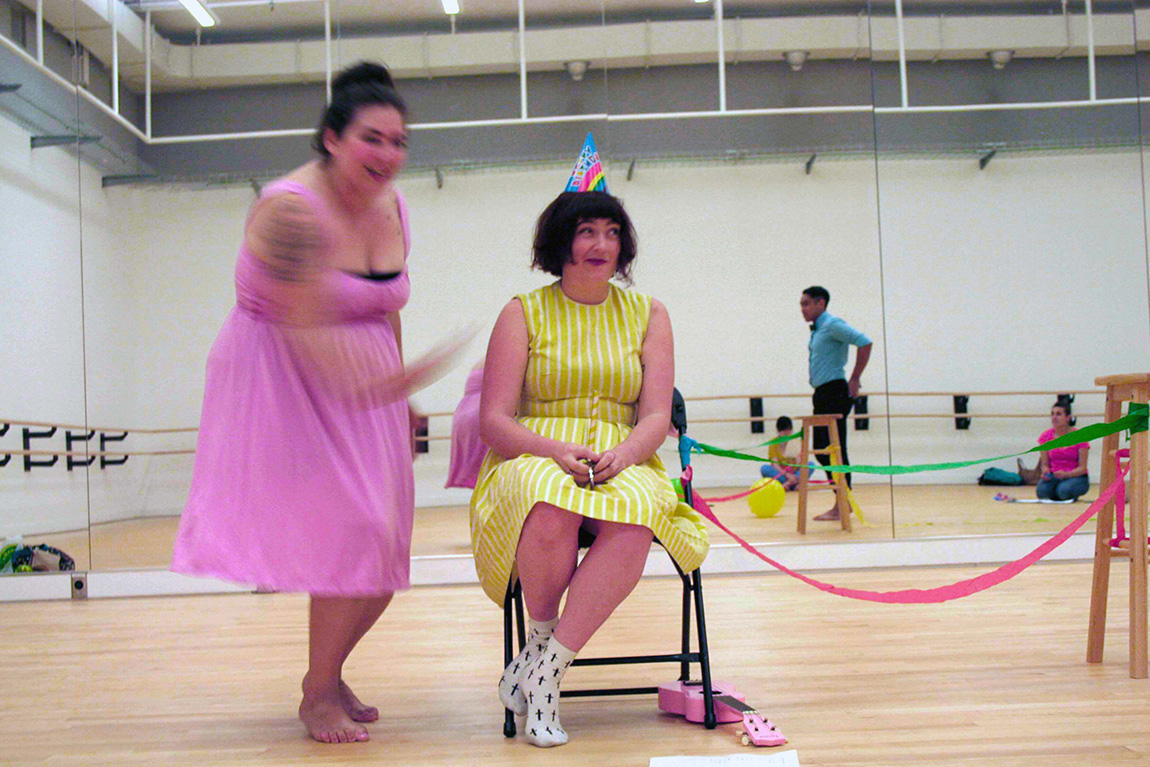 The balloon method changes, she blows like a beast loping in for a hunt. She is removed. She runs her hands along her pink ruffles like a bird flapping their wings. Quiet. “Where do we go when we die?” Optimism is adapting into a mood to help you survive. Why do people say they’re so sorry at a death as if they had something to do with it? There’s a balloon blowing battle and a shiny bouncing ball. “Why do flowers exist?” To be beautiful or simply to procreate, it depends on who’s camp you’re with. Many kernels. 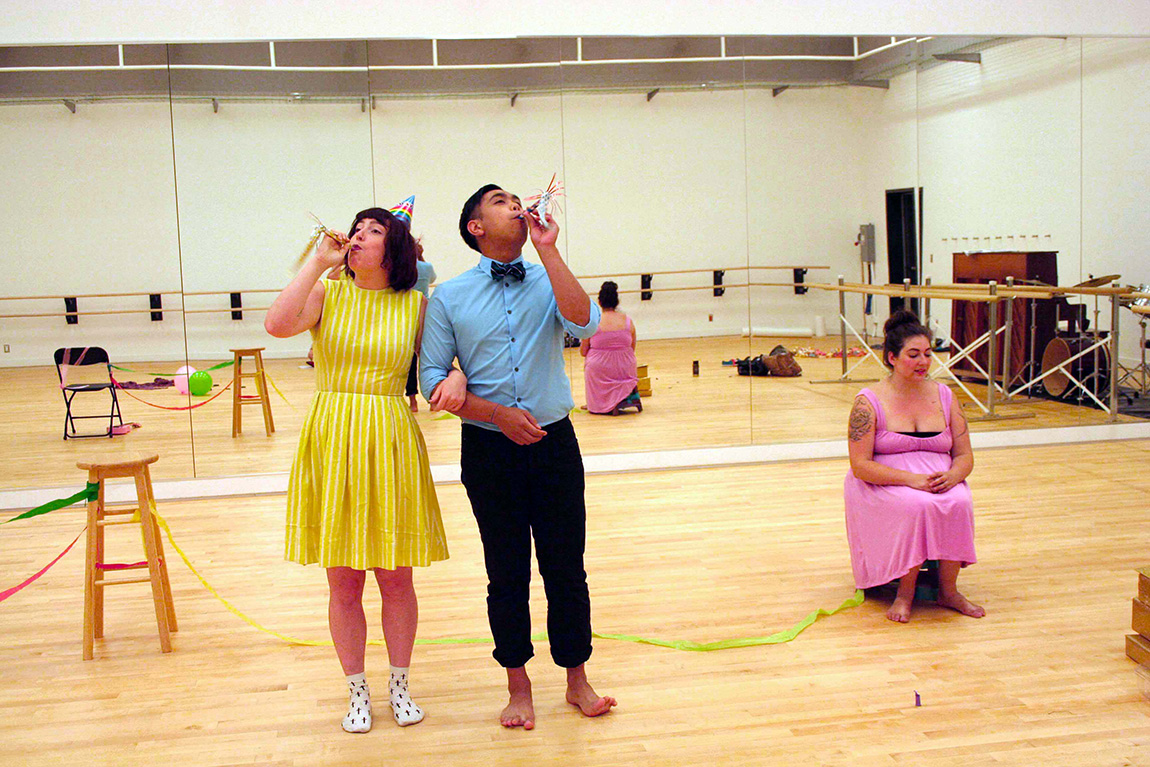 Their birthday hats cast shadows on the brick wall. Who’s coming to this party? They’re two birds who could fly away at any moment. We’re waiting for Godot. A haze of happiness, and Pessimist forces a smile. The birthday girl finally speaks. She has a deep silky voice. She sings a cheer up song. They gang up on Pessimist and again she rustles her dress like flapping wings. She chugs a key lime fizz and gives us a smirk as Elysse flips off the lights again.

It’s smartly produced and directed, simple and strong. The actors deliver the text with clarity and the popcorn rhythms fly. Kaylin says the idea for the piece started when she was watching geese, she found them funny and wanted to bring them to life on stage. It’s a fun starting point that comes across in Psyche Theatre’s plucky final product. *sorry for the pun fowl

A frumpy square armchair with a bucket lamp is slid stage left. A white TV set is carried across and a long unfinished wooded table is pulled centre stage. There’s a giggle before the lights go out. 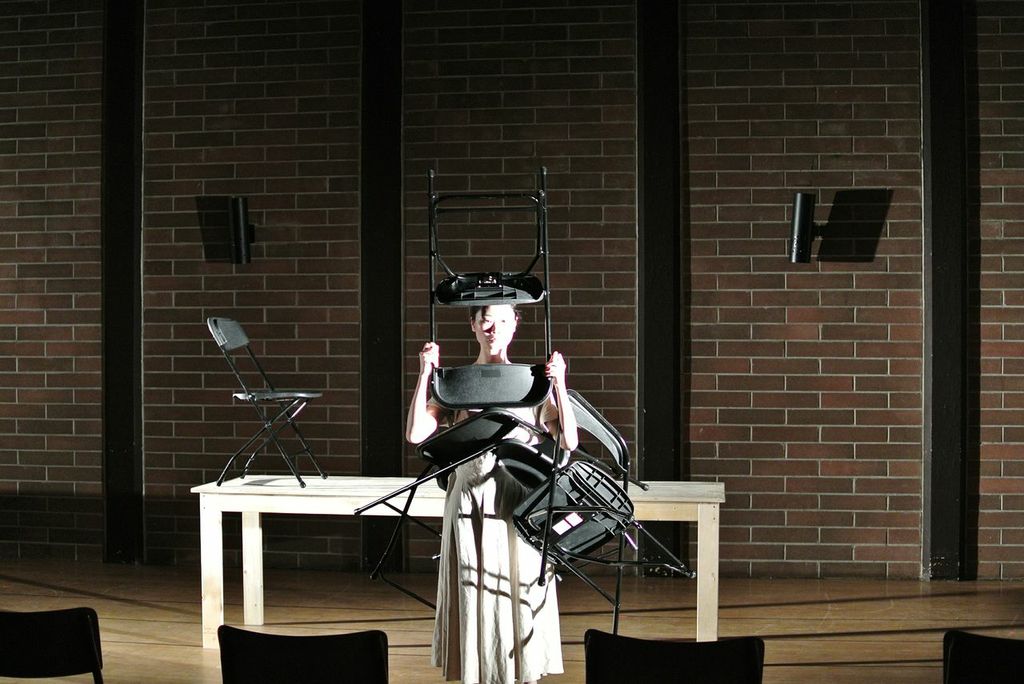 The Gliding Cleopatras, played by Iris Lau, is balancing chairs on her body making a Butoh-slow cross of the stage. She turns and reveals more, more chairs than I expected. She’s entwined. A folding chair scrapes across the table-top and rests on the table. Shiny red shoes scrape the ground. The folding chairs wrap around her waist making a sharply angular bustle. 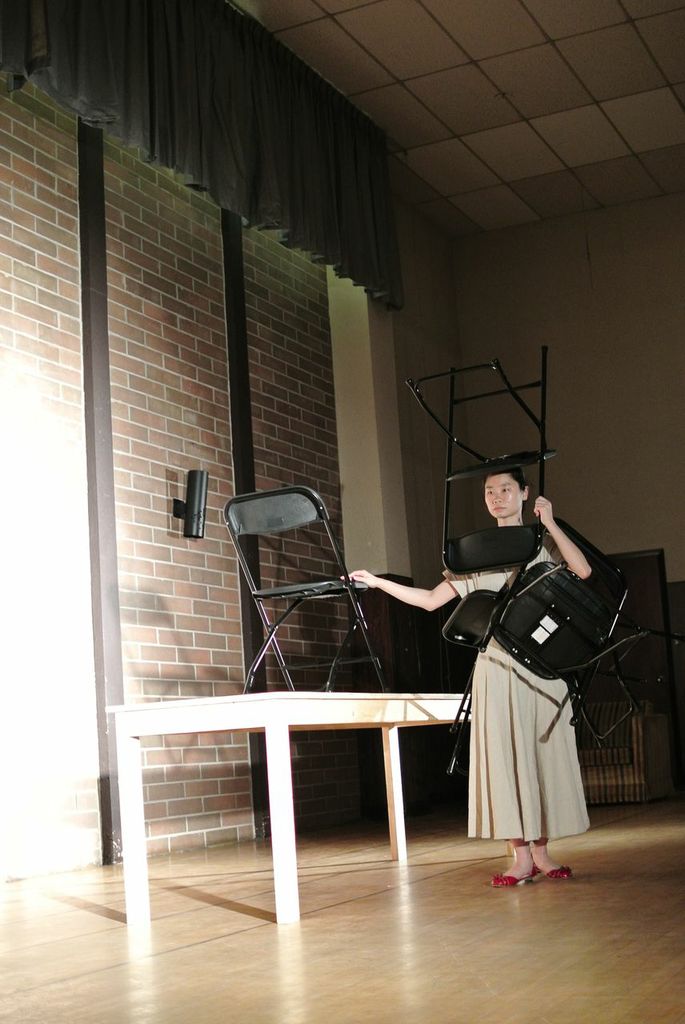 Delicate fingers. Concentrated balance. The shadow of chairs on the wall. Sharp white lights, she disrobes from the chairs. A beautiful face that gives nothing away. Stoic, like glass that will not break. The Centaur is poised and ready. She wears dark shades and a yellow cut-off T with a screen-printed face mimicking her very own.

All players enter and bow. A cleverly backwards way to start the show.

A dinner. We can’t quite find our place at the table. They know, but we don’t, they have their own order, a system. No elbow room, they jostle each other. Another enters with garden gloves and boots. Four white cups. A ritual, they grab and chew. One doesn’t. We hear them chew. They’re straight faced, they don’t know why we laugh. They make room for their fifth. Is it bubble gum? One balances. Their hooves are revealed punctuated with a splash and crinkled cups. Their hands are hooves.

How DO you comb your hair with hooves? A nuisance.

How DO you scratch your back without fingers? Can’t be satisfying. 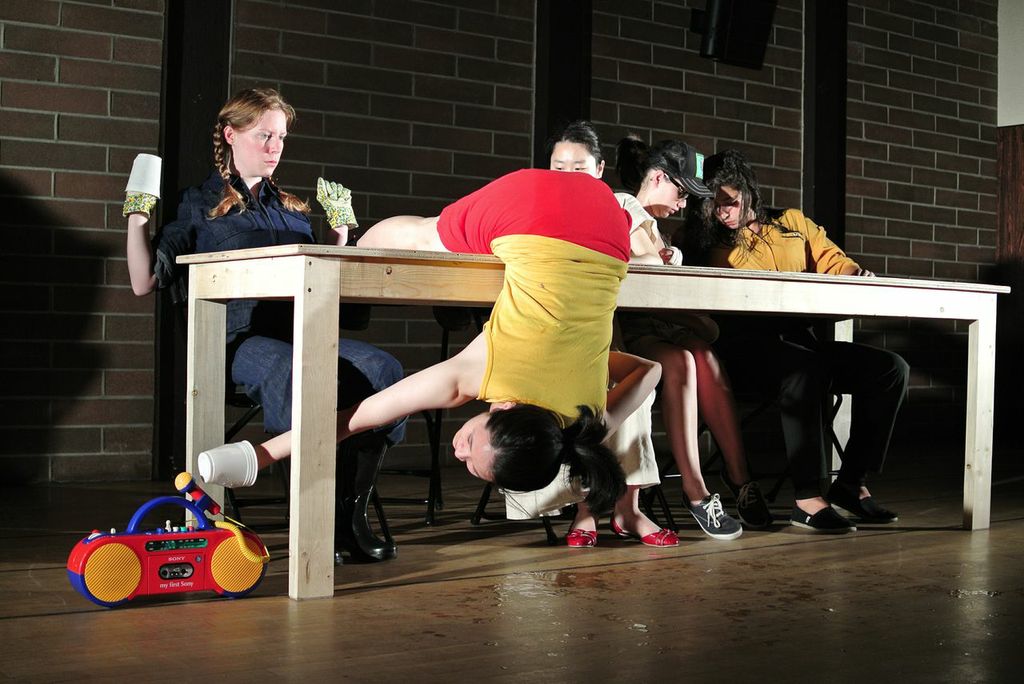 The Centaur tries to go for the cassette deck. We laugh; it’s hopeless. She is belly down holding on with only her feet. The table is turned, uprooted, balancing on its two legs, more precarious than four. A face off. Hooking chairs and not having a sense of the whole body, it can be clumsy as an animal. It’s a goat getting into garbage or an amiable horse getting into trouble. The cassette tape gives over to the flickering TV set and The Centaur watches from a cool slouch in the armchair.

Then a most clever love letter: animal infused, 4-legged-vernacular injected. “I musk ox a question” “in a minot-aur two.” “Not sure if it’s unic-or-not,” “goa-to bed with a hog goodnight.” The melodramatic wordplay canters on and we eat it up. The performer joins in, sheepishly nibbling and literally chewing her words.

The table is a turnstile, keeping the cattle in line. Shannon Lee as The Centaur has a striking presence in her sunglasses, every motion is imbued with strength and purpose. She climbs onto the table as her co-players lower her to the ground. There are now 5 in the stable. Scratch. As humans we feel not too far from these animals. Simple, understated presence. Everyone holds a quiet grace. 5 engaging performers. A lulling rhythm of hooves on wood. The beiges and neutrals of the painting come alive.

The palpable presence of Elliot Vaughan’s soundscore fills the room amplified from nothing more than a simple tape deck. Hoof has a serious humour, a humour of straight faces. This final table-top choreography of animals in the stable was their point of departure. This funny, strange and charming Clip-Clop dance was the kernel which led to centaurs and mythology which led to Dutch paintings. They used elements of the background figures to build movement. The two dimensionality of a painted landscape highlighted by the bare white light creates these sturdy stage pictures.

Kaylin and Elysse, colleagues from SFU, have come together for their first foray into producing. It’s a natural fit, Kaylin says: two one-act pieces, one birds, one beasts. Sharing the space means sharing the costs. It’s a clever and practical move as emerging creators and they’ve made smart choices. They’ve kept their elements simple and the productions are clean and clear. Kaylin said she rented the lights from her dad. The 4 PAR Cans do the trick, even if they made the cast sweat in rehearsal. Right now, the emergency exit doors are propped open releasing the heat and sending the crowd off into the night.