VANDOCUMENT’s Ash Tanasiychuk was invited by local artist Claire Love Wilson to video record a performance of her work in progress, LAND/SONG/LAND, at Little Mountain Gallery.

During the following Q&A, Claire spoke of her creative development process, the practice of Song-Walking.

In order to shed some light on Claire, her creative process, and provide context for these videos of LAND/SONG/LAND, Claire has shared a thoughtful look into why and how she does Song-Walking.

The Call is my term for the feeling that comes over my body and mind when I am about to set out on a Song-Walk, a musical walking practice I’ve been developing over the last few years. The Call feels like a mini electrical storm building in my muscles and joints. It is urgent, exciting, and prickled with a sense of possibility. It is that feeling of pent up energy many of us experienced as children when we have been inside for too long. “Get out, Get out!” the body screams. And so I do… I get OUT. Outside that is.

There are a few important factors that differentiate Song-Walking from other types of walking and they begin at the outset:

The Song-Walk has begun. I invite my senses to open. Sometimes a guiding voice appears in my head. It may sound like this: Feel your feet on the ground. Slow down. Each step. Feel the vibration that occurs when your foot touches the ground. Can you hear it? Sounds. Listen. Listen. I touch flowers or leaves or grass or concrete. I turn my ears in different directions to allow sound to flow in different ways through my body. I let my body move and shake. I play with my voice, flap my arms, and exaggerate my breathing. I open my eyes REALLY wide. I receive colors like they are friends I haven’t seen in a long time. I let it out to let it in. The only restriction to this sensitizing process is that I must keep walking. 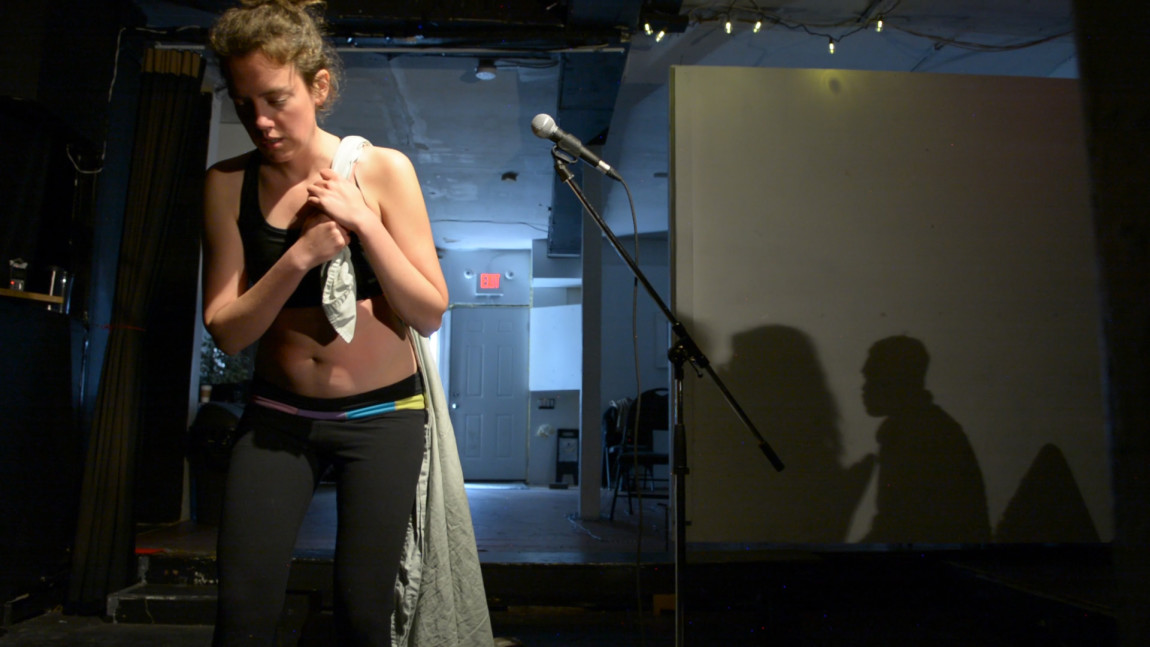 Once I am feeling open (in my body, through my senses) and loose (in my creativity), I ask myself the question, “Where are you?” I look around. I stop to listen. I bend down to the ground. I sniff the air. Rather than assuming I know where I am, I trick myself into thinking that I’ve never been where I’m walking before, that I’m encountering it for the first time. This question also introduces a political dimension into the practice. “Where are you?” I feel into the space of unknown. I feel my ancestral new-ness if/when I am walking on the unceded territories of the Coast Salish peoples including the territories of the xʷməθkwəy̓əm (Musqueam), Skwxwú7mesh (Squamish), Stó:lō and Səl̓ílwətaʔ/Selilwitulh (Tsleil-Waututh) Nations. I feel into a space of guest-hood, and of my identity as a white/Scottish woman and settler. Where does this live in my body? How can I sense it?

What I do with this process of situating myself historically and politically will change with each Song-Walk. Sometimes I turn my body in the direction of different First Nations’ territories and take a few moments to breathe, listen and give thanks. Sometimes I make sounds or tones as offerings to the peoples of those nations. Sometimes I say the names of the nations and roll the sounds around in my mouth, and repeat, repeat, repeat. I don’t do this to atone myself of privilege, or to “deal with” the reality that when I practice in Vancouver, I Song-Walk as a settler amidst legacies of ongoing colonization. I just know that the question, “Where are you?” is vital to a Song-Walk. How attentive can I be to this exchange? What does it feel like to infuse more awareness, gentleness and respect into my position as a guest here?

Once I have opened my senses, and situated my body on the land I’m walking, it’s time to get wild. Impulses, impulses, impulses. Impulse is a word often used in acting training to describe the surges of energy that move through our bodies and shape behaviour. It could look like crouching into a ball, or raising your eyebrows really high, or your voice suddenly going very quiet. In our daily lives, many of us suppress our impulses. We don’t do the things our bodies really want us to. A Song-Walk is impulse driven. It relies on the electrical currents moving through the body to begin creating sign-posts on a musical memory of land. This is the point in the walk where the architecture of taking steps can be totally abandoned. I allow my body and voice to be drawn to different sensory phenomena occurring in the environment through which I walk. 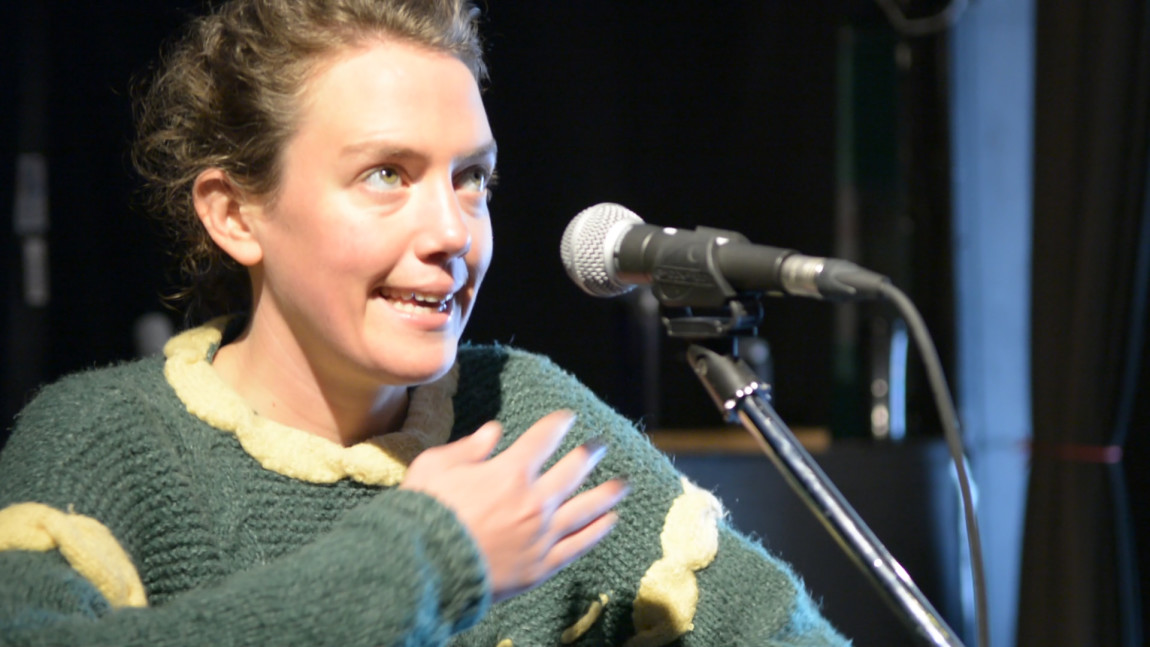 In Song-Walking, listening is creative. It is the source from which creative responses emerge. Let’s say my impulses have brought me up close and personal with a medium sized hole in an oak tree. When I arrive there, I listen. I turn my ears to the hole. Is there sound? I listen with my eyes. What is the shape like? Can I follow it with my eyes? Does my body want to make a similar shape? I follow my listening until a gesture emerges. Or if I have found the sound or part of a song, I will follow that until a gesture emerges. Gestures and sounds are the physical and musical markers on a Song-Walk. They create dynamic and living imprint of the walk, which I can later re-visit. 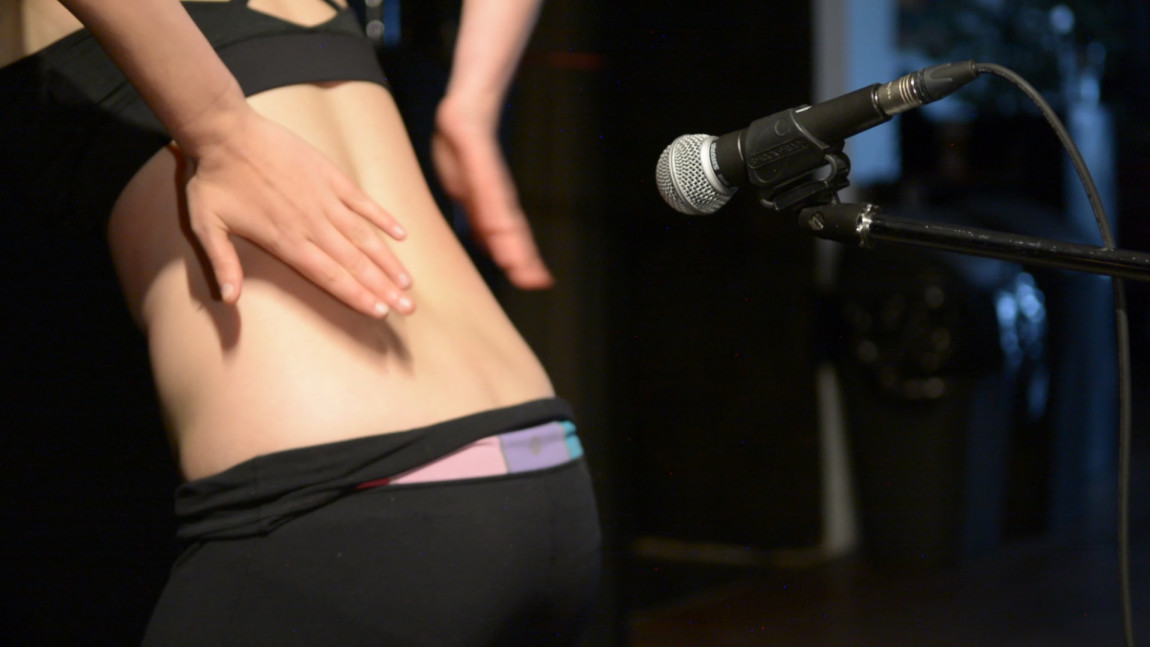 While I Song-Walk, I like to play with the questions: Who is listening? Who is making these sounds? Whose gestures are alive in my body right now? Sometimes those questions return me back to myself, and other times a different person or character will emerge. I allow the feeling of this other character to enter the movement and sounds I am making. Lyrics for songs or short tunes may emerge from these character essences. Sometimes they speak in monologues, or other times characters will want to speak to each other. My job as the Song-Walker is to let it happen, and to keep the connection alive between my body, the land I walk on, movement, and sound.

Taking Existing Songs for a Walk

In the piece I have been creating recently, I use Song-Walking to work with traditional Scottish ballads. I am curious about the ways that these old songs, which are part of my ancestral lineage, move through my body and voice in this space/time. I am also aware of and curious about the conflict of singing traditional Scottish songs on Unceded Indigenous territories where they carry a historical imprint of colonialism. Is there a way to decolonize these songs? How does the land want to re-work and re-shape them?

The initial portion of the Song-Walk has ended. I arrive at my door buzzing with a sense of connection and wonder. It’s like that feeling when you’ve had a dream that has taken you many places, but you can’t totally remember or understand how you got to all of them. After re-fuelling with some water and a snack, I move directly to the loop pedal. It is important not to leave too much time between the physical Song-Walk, and the process of Song-Mapping or composition. It is now time to translate the gestures and sounds gathered into a composition that remembers the life of the walk. 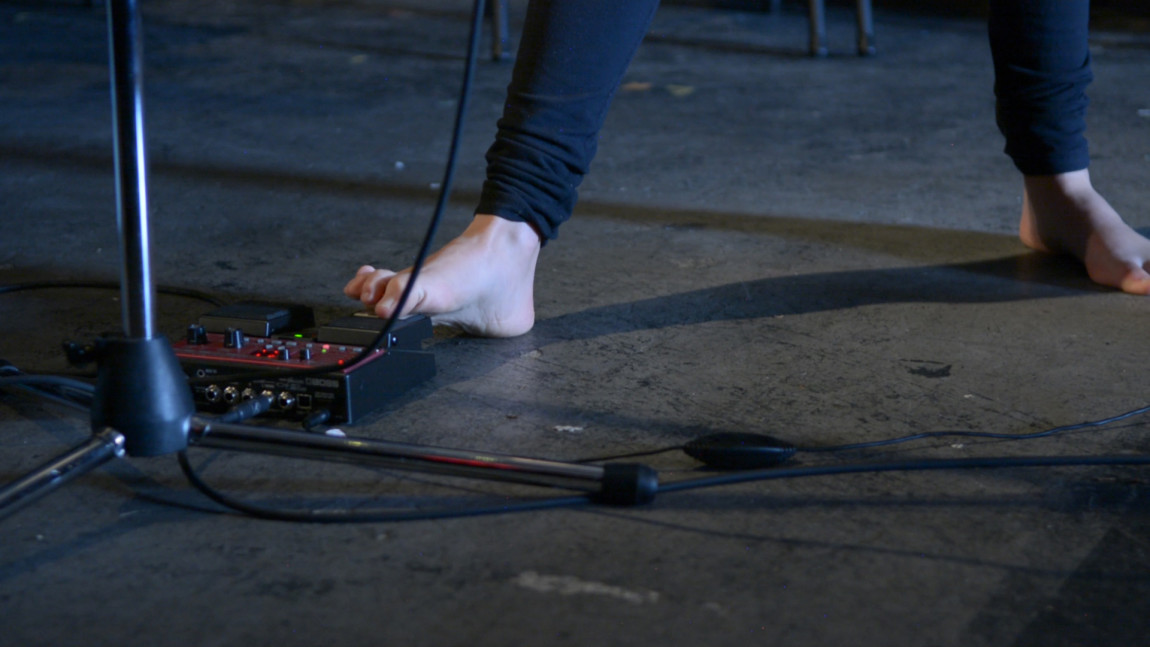 I use the term MAP and SONG-MAP in my practice. Maps fascinate me. They always have. I spent many hours as a child gazing at maps and wondering about the weirdness and wonder that these different sized shapes on a flat piece of paper or a spinning globe actually translated to LIFE in other places. I think that maps can be used as a weapon (as they so often have in colonial contexts), but that they can also be used to honour and connect with a place. Can maps be responsible and respectful? How can they pay tribute to the ever flowing and shifting current of life in the places they claim to represent? 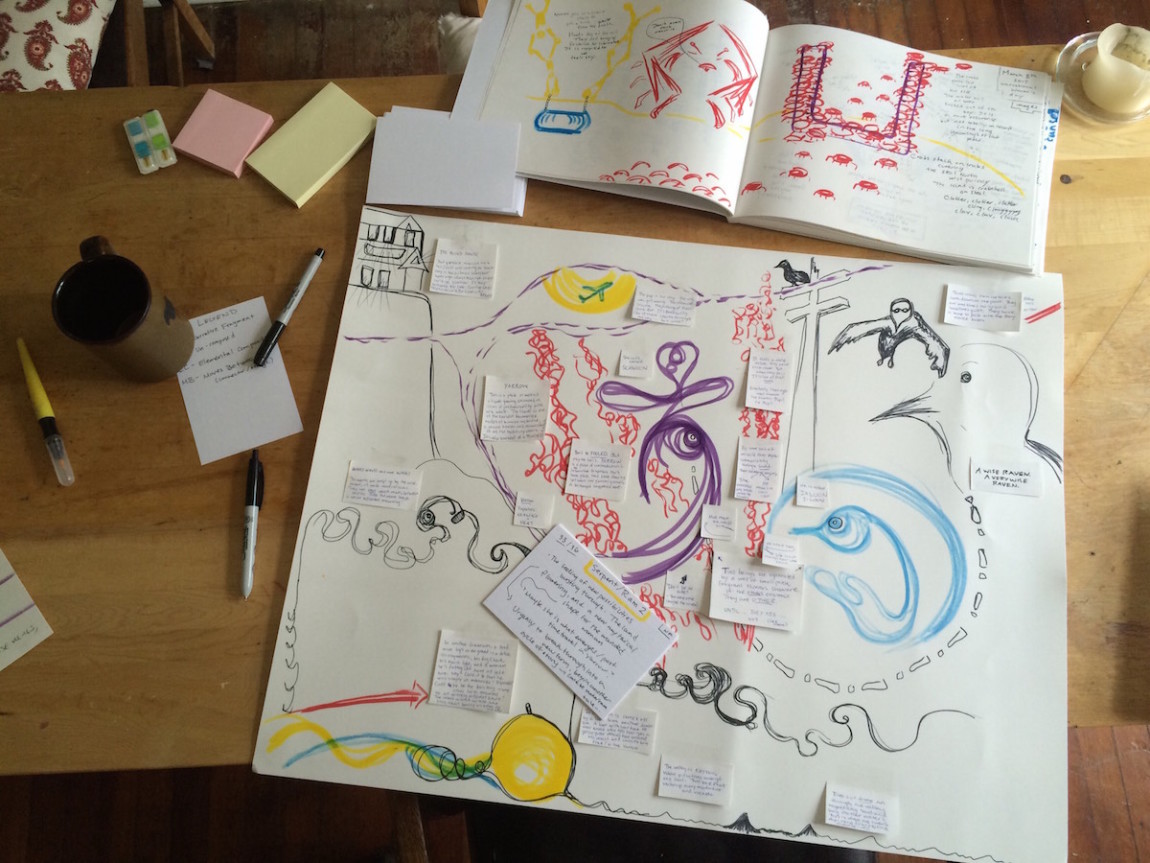 Song-Maps are an initial exploration of some of these questions for me. Indeed, I work with traditional Scottish ballads, because they come from a place-focused song tradition. I am enchanted by the concept of a song as a moving flowing map. Not a map that tries to capture or make a place static, but a map that flows like memory does, recalling certain details through the enlivening of sound and movement in the body. It’s also important to note that I’m not claiming to create an objective or universal memory of a place, but rather a living artefact that begins and ends with my experience. I am mapping my walk through a place, not the place itself.

I don’t want to say too much about what my Song-Maps look and feel like. They are best experienced, so come and check out a show and get a taste for yourself:

When the Song-Walk is brought into the studio, it reveals new things. Through the process of remembering, gestures will take on a different tone, a layer may be added, or entire song verses may emerge from the foundation uncovered on the Song-Walk. Layer by layer, the walk reveals itself. The composition or map created is not one that is put away in a drawer and left to collect dust. It lives in the body. It swims amidst the watery chambers of memory. And from there it can be enlivened, again and again, something new and surprising unearthed each time.

Explore Claire’s current piece, LAND/SONG/LAND, even further, in this 5 minute cut, and check out more of her work at clairelovewilson.com.

Finding Our Place In Time: Background / ThisPlace at Grunt Gallery