On Life , Art and Business

An Interview with Artist Ricky Alvarez of Tinto Creative

Words and Photos by Kaitlen Arundale 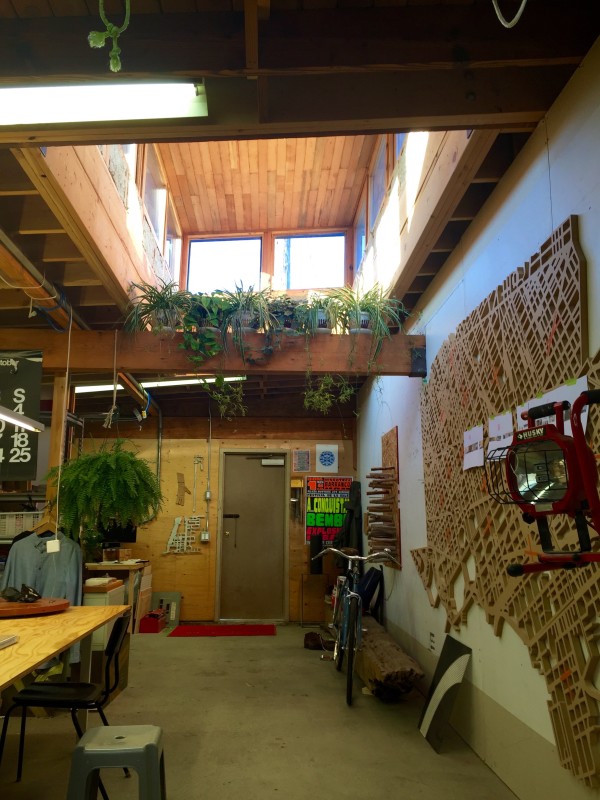 Skylights and plants over at Tinto Creative Studios. Photo by Kaitlen Arundale. 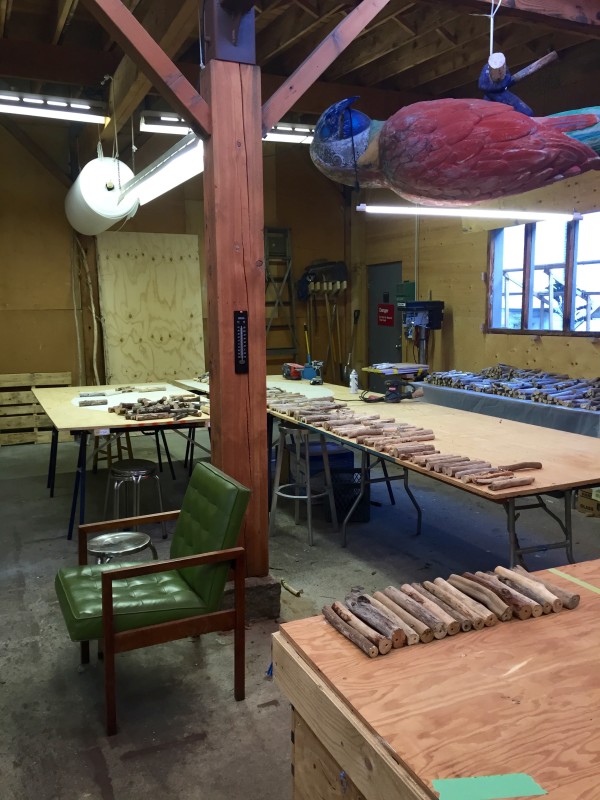 Ricky Alvarez is a local installation artist and the creative director of Tinto Creative, a company he started not long after relocating to Vancouver. I met Ricky at his large studio which felt unlike any other Vancouver back alley studio I have seen to date. It was bright and welcoming with raised skylights and even a bit of sunlight shining down on a row of potted plants. I was instantly hit with a wave of nostalgia, maybe it was the scent reminiscent of my dad’s old woodshop or the giant Earls parrot hanging from the rafters. Ricky is the man behind the interior of the new Cartems Donut Shop on Main and 6th. His art installations can be seen all around Vancouver including the coffee region nail map in Revolver Coffee on Cambie, the brass rod crystalline structure on the wall in Small Victory in Yaletown, and the infinity mirror at the Clough Club in Gastown … just to name a few.

Kaitlen Louise Arundale: The lighting in the Cartems is fantastic.

Ricky Alvarez: Thanks that was supposed to be visual anchor actually. I am just trying to focus more on my art installations right now and being represented by a couple of galleries and art agencies in the middle east and in the states.

KLA: Okay but the restaurant realm, is that something you just fell into?

RA: I have been working in the service industry basically since I was 19. In Ottawa, I was always a busboy or a bartender or a server and I always had a side business of doing window dressing for retail. I found I was a really great outlet, a controlled space that was both public and private at the same time. I really enjoy the duality of the platform so that’s how I developed a business-oriented creative side. When I moved to Vancouver I got a job at Bao Bei. It was my first job in Vancouver and I need to establish myself and kind make some money. It was there that I bumped into Craig Stanghetta, who is like the star designer at all the restaurants. He was having a beer at the bar and I just went up to him and said, “listen, I am a big fan of your work, I like what you do if you ever need a hand let me know”. Very casually you know, and he turns around and says, “are you free tomorrow?”

So the next day at 10 am I met with him, it was basically an interview. He was at the point in his career when he was breaking through, but he still needed help. It was interesting, the rest is history.  That’s kinda how it started in Vancouver.

KLA: So how did you develop your process, you talk about your process being very important.

KLA: Yeah, I guess not having that academic art background I would be interested in hearing a little bit more about it.

RA: Well it is definitely a lot harder. I have nothing to compare it to so I am not really sure, but it is about growing for me. I started working out of my kitchen and then to having a studio on union st which was only 400 sq ft, so it was basically a closet, then adapting to my new surroundings and just growing, Every year I would rent a different studio. Last year a had a studio with Craig [Stanghetta] and Phoebe and Aaron from Glasfurd & Walker. It was Tinto Creative, Glasfurd and Walker and St Marie in the same building, it was a really good creative space, but it just wasn’t big enough. The way I saw it I need a big space that is somewhat too big for me, something that allows me to grow into it and allows me to kinda develop new processes. I needed a bigger space because I like to work on multiple projects at once. You can see I have 3, 4 tables, this one is a sand table it has sand underneath to cast, but I cover it so I can use it as a table too.

It is important for me to be able to work on multiple projects at once because I get bored really easily, I get sick of cutting this  [He points at some bundles of metal rods that have been taped off to measure out the small increments they will be cut into]  I’ll just move to another station or I will do a prototyping or I will pour some plaster over here. I need to be distracted and I needed a space to allow me to be distracted. More than anything it’s being dedicated to a schedule, treating myself like a professional.

I spend more time here than I do in my house and it costs more to rent this space than my apartment, so I see it in reverse. This is my house and I have a bed in my studio up on the hill. 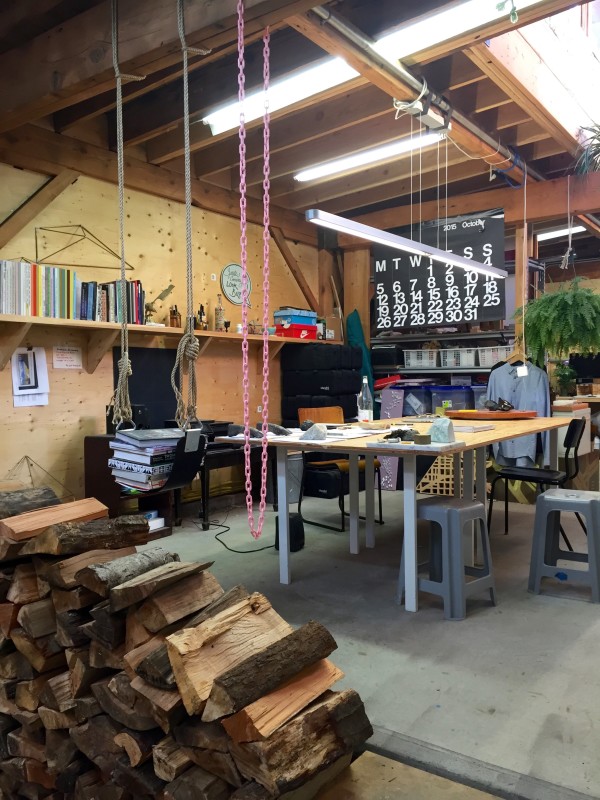 One of the many workstations at Tinto Creative Studios. Photo by Kaitlen Arundale.

KLA: There are so many different materials that you are working with, how did you develop those skill sets?

RA: Every project is essentially compounded on the previous one. I try to use the opportunity to use a new material, a new process, or new systems in each future project just so that I can have it in my back pocket for whenever. 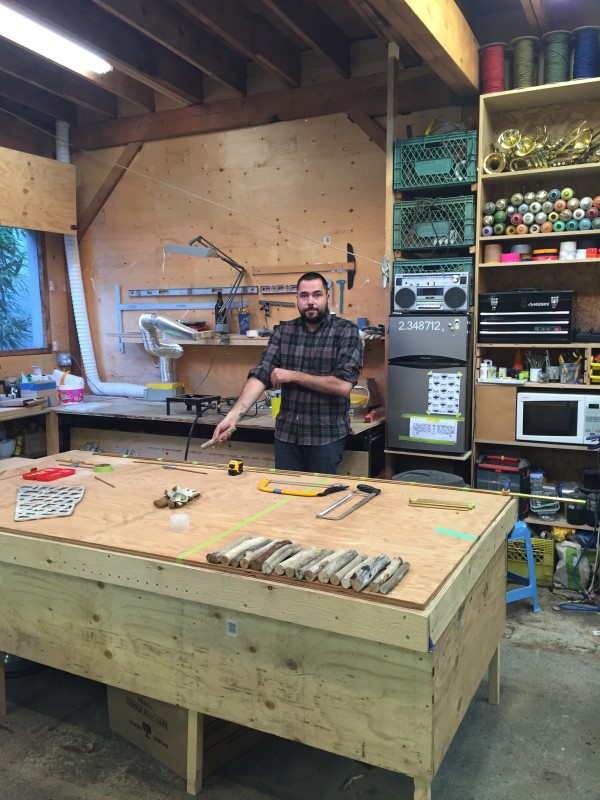 K: Do you see yourself living in Vancouver for a while now?

R: Actually no, my long-term strategy is to have a studio in Vancouver and one in Mexico City or just to move to Mexico City. Right now I am at a level where I am kinda just breaking through the states and I would like to work for some companies internationally. I love Vancouver, it’s an awesome city, but I don’t see myself dying here I see myself growing old and dying in Mexico City.

K: I have not been to Mexico City, I have heard so many amazing things about it.
R: It’s such a beautiful city, culturally rich but inexpensive to live in. There is a lot of money there and I was born in Mexico City actually. I can speak Spanish without an English accent but I can speak English without a Spanish accent. I am perfectly bilingual to just connect with people and there’s a certain cache that Mexicans put on foreigners, especially interesting people. I feel like every time I go there it is really easy for me to meet interesting people. I feel like I will probably not be here for more than 5 years. I want to be 40 in Mexico that was my goal and I’m 34 right now.