Popcorn Galaxies' urban audio project, documented by the audience and the artists. 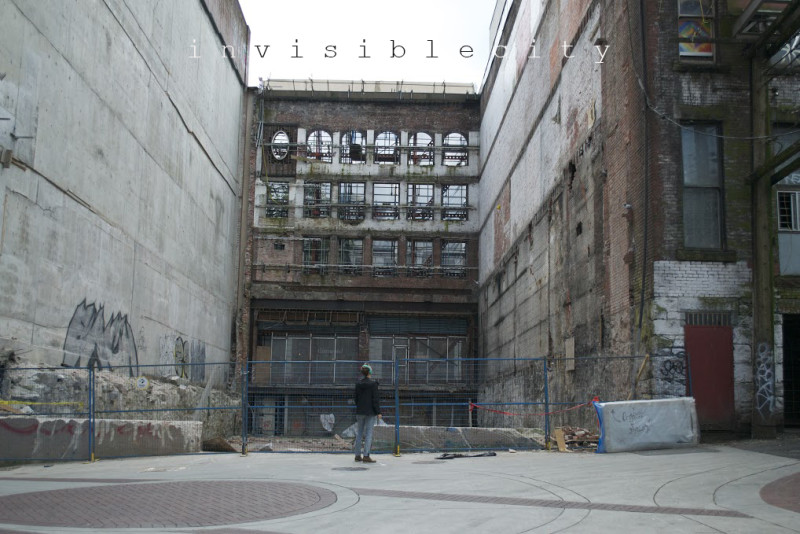 Assembling on a downtown Vancouver street corner, ten audience members at a time are greeted by Popcorn Galaxies‘ co-artistic directors, June Fukumura and Keely O’Brien (yours truly). On this corner there’s a sitting area beneath a huge glass dome, probably intended for lunch-breakers from nearby office buildings, strangely deserted. Looking up through the dome, the surrounding city is simultaneously framed and obscured by the lens of glass, a phenomenon consistent with the central theme of the piece, and our motive for choosing this as the audio walk’s starting point.

We hand out headphones and mp3 players and give the go ahead to start the audio track. A soundscape begins to play.

“To ensure minimal outside disturbance, big, almost industrial-sized headphones are distributed, which, like (and in place of) sunglasses, possess the transformative power of a mask. Putting them on allows the participant to feel invisible, to immerse in the first-person experience.”

During the show’s creation, our sound designers/musical collaborators Barbara Adler and Paul Paroczai gathered field sounds in the neighbourhood, which they manipulated, layered and collaged into a soundtrack for the walk. This opening section includes the trickle of a nearby fountain, the roar of passing cars, and a symphony of traffic light crossing chirps.

The audience is sent walking into the city by our version of a GPS system (voiced by Adler), who acts as a consistent guide throughout. Agency is handed over to the audience member in choosing their route, so the group quickly disperses. Each person’s path is different.

“Such freedom is vital for a truly unique experience, but also leaves a lot to chance. The scarce geographical direction makes the event feel a little scattered or, cacophonic. Of course, in terms of staying true to reality, freedom of choice is also the freedom to make mistakes.” 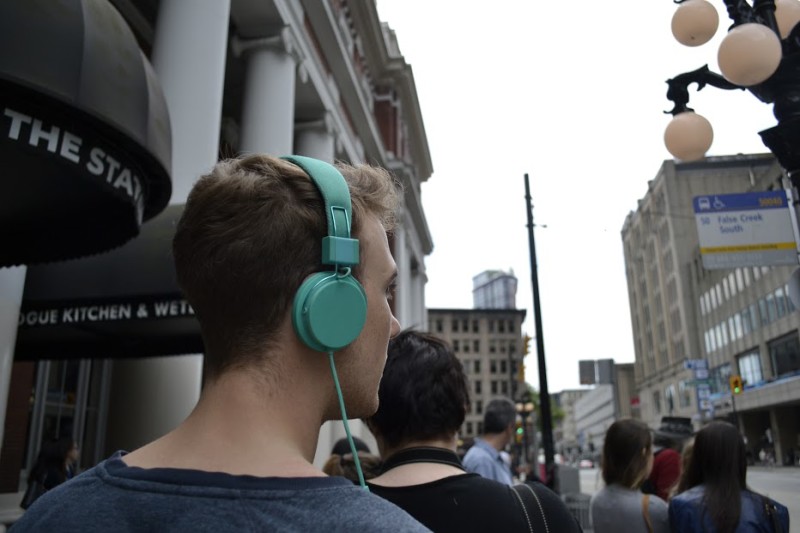 As the audience members walk through the busy streets, the GPS system prompts them to turn their attentions to their surroundings. Instructions are given to locate strangers of loose descriptions, and follow them at a subtle distance. For example, “Look around until you see middle aged man. Do you see him? Follow him. Listen to his thoughts.” Brief monologues play- verbatim snippets taken from interviews we recorded with a variety of acquaintances.

“When I was listening to those monologues laid overtop of the image of some passing pedestrian, it became startlingly easy to see the monologue begin to reflect itself in their faces, or in the way they walked and held their bodies. I was able to imagine that I was really eavesdropping on the private thoughts of that one particular person, and then when the illusion broke, that was when I found myself wondering what might actually have been going on inside their heads. The piece as a whole made me aware of how loud, and full of story, and even how painful the whole city would be if we could hear all the things that are happening all the time but inaudibly.”

This concept of framing the city with a magical x-ray lens served as a central impulse in the creation of the piece. Could we invite the audience to imagine and appreciate the complex, unseen worlds of strangers, inanimate objects, and the urban landscape itself? And could we evoke empathy, wonder, and curiosity to inform these interactions?

“Self-guidance is simultaneously the strongest and weakest aspect of the experience (slash performance slash radio theatre). As a listener, it can be tough to juggle actively engaging with the content, while curating their own path, while trying to enjoy themselves.”

Throughout our creation process, we struggled with the concept of audience agency. It was important to us to create a form which would allow each audience member space and opportunity to have their own unique experience, but we didn’t want to give too little guidance and leave the audience lost and frustrated. The choice of content was also informed by this challenge: our attempt to provide plenty of narrative elements ran the risk of feeling overly manipulative or of narrowing the audience’s possible interpretations of the world they were seeing around them. 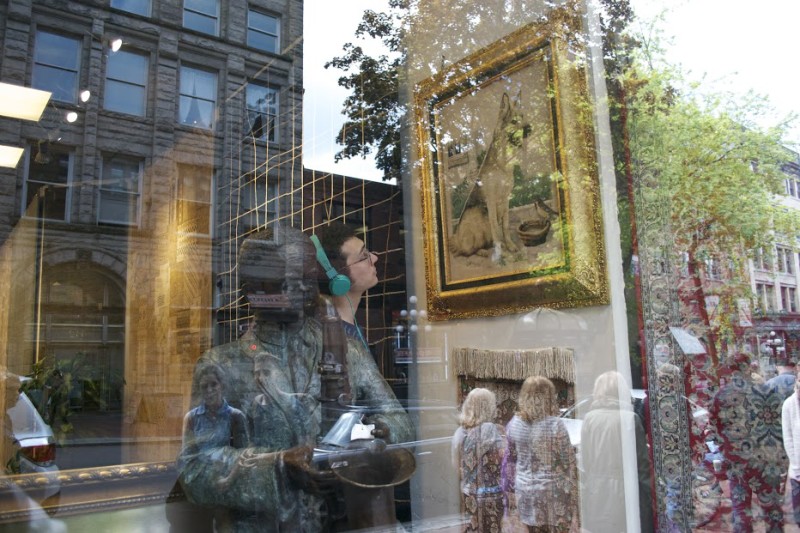 “There was a lot to notice, and a lot of new things to notice coming right on top of all the things you were just noticing, and at some point it becomes impossible to hold on long to all of it. Even the things that feel important and impactful in a moment slip away and get pushed out. Maybe that’s my fault for forgetting, maybe it’s not a fault at all.”

The audio walk continues. The audience pauses beside a reflective surface and listens to it sing (it’s feeling self conscious, but wants attention). In the style of a radio play they hear a story in three acts of a marriage falling apart; they find the story’s heroine among the people around them and watch her until she vanishes into the crowd. An overheard torrent of many strangers’ worries swell and fade. The two lines of a right angle sing a duet. Overwhelmed by her existential crisis, the GPS system crashes, forcing the audience to ask a real live stranger for directions instead.

“The most interactive moment was when I asked strangers on the street for places of interest…  I abruptly found that I was in a sea of tourists (a function of the locale, but still totally unexpected)…  I had to ask seven different persons/couples before I found even one that spoke English, let alone knew anything about Vancouver…  I became acutely aware that these homogenous-seeming crowds on the streets, are actually tiny isolated islands…”

At last, amid a musical piece collaged from the layered tones of Gastown’s famous steam clock, the audience is instructed to remove their headphones and find their way back through the city to the place they began.

“Invisible City charmed me into a new, curious relationship with downtown Vancouver. In an area I had previously disregarded as cold and concrete, I found myself making unlikely acquaintances. I stood face to trunk with a tree and giggled as it sang to me. I asked a man for directions for a pleasant walk, and he told me how to get to the mall. Windows and right angles requested recognition. I marvelled at alleyways, invented stories about strangers, and found a secret garden. I was never lost, yet I discovered a finer appreciation for the unseen and the overlooked within the paths I trace regularly through the city.”

Popcorn Galaxies creates work with the intention to “illuminate the mundane by juxstaposing [sic] it with the unexpected, and to test the thresholds between imagination and reality, life and theatre.” They presented this Invisible City sound walk in Downtown Vancouver on Saturday, May 23, 2015. More info available here.