The voices of Femme City Choir

Words by Adèle Barclay
Photos by RDM Photography and Art

2015 is year of the femme. The hashtag #yearofthefemme has recently popped up on social media feeds, especially the Instagram accounts of Vancouver queers. As the snapshots accrue, the murmurings have been getting louder—all in the service of validating and hailing queer femme identities.

To kick off this year of the femme, the Femme City Choir belted out their mid-year recital at the Vancouver Community College auditorium last Friday and Saturday nights, channeling a range of retro starlets for the diva-themed concert. Tickets for Femme City Choir Presents: Divas! sold out in under three hours, so the auditorium was packed and the audience audibly buzzing before the show. 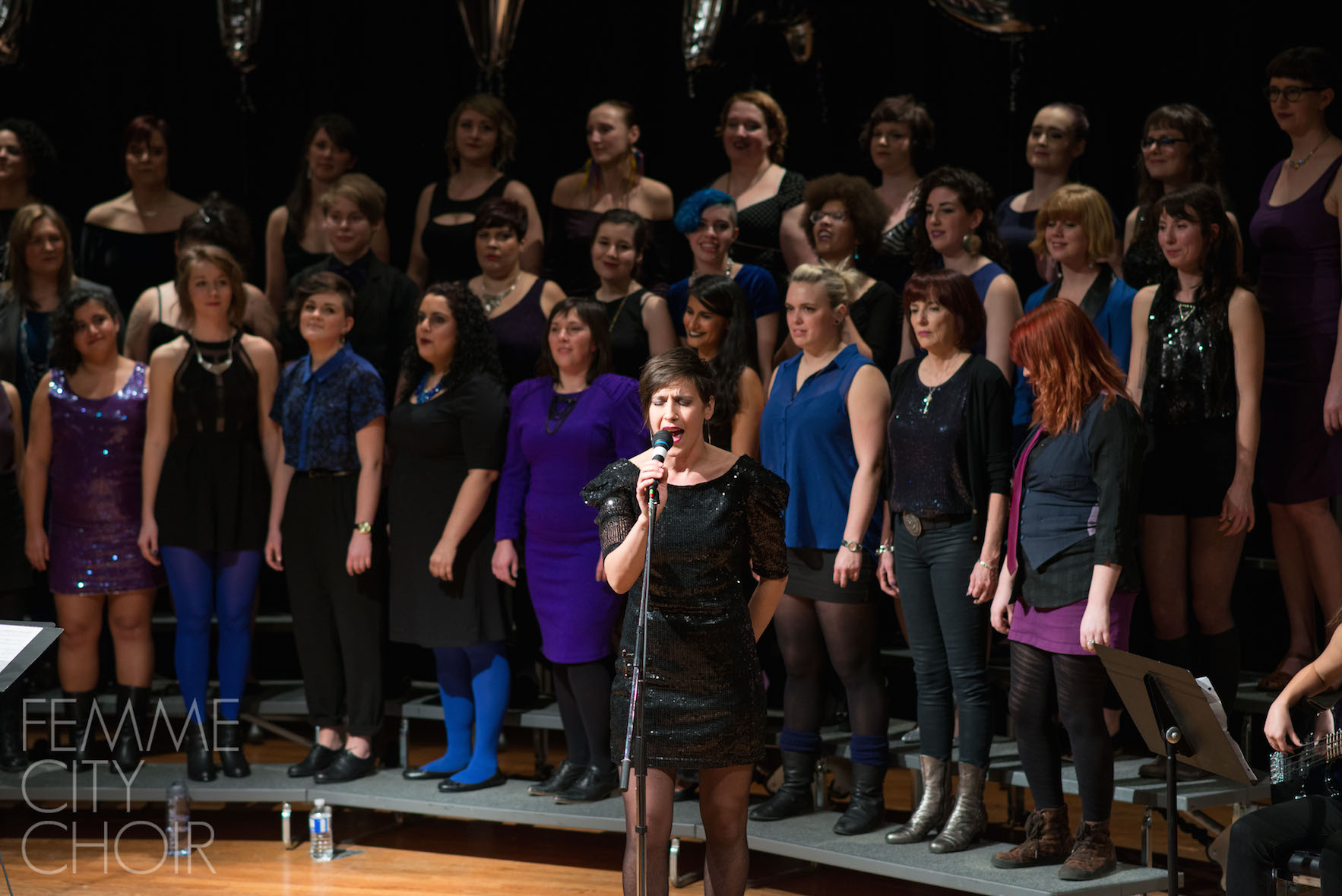 Opening with Queen and David Bowie’s “Under Pressure,” the choir swaggered onto the stage Saturday evening and snapped along to the song’s iconic and infectious bassline. The inaugural number tacitly announced the choir’s intention to explode the category of diva, extending its scope beyond received notions, stereotypes and divisions and rightly inducting Bowie and Freddie Mercury into the diva hall of fame.

As part of their introduction, choir directors Lau Sequins and Kate Monstrr declared their goal of reclaiming the term diva, aiming to strip it of derisive misogynistic and racist connotations and, instead, recalibrate it for femme empowerment. They invited the audience to “Come reclaim diva or celebrate the heck out of it!” 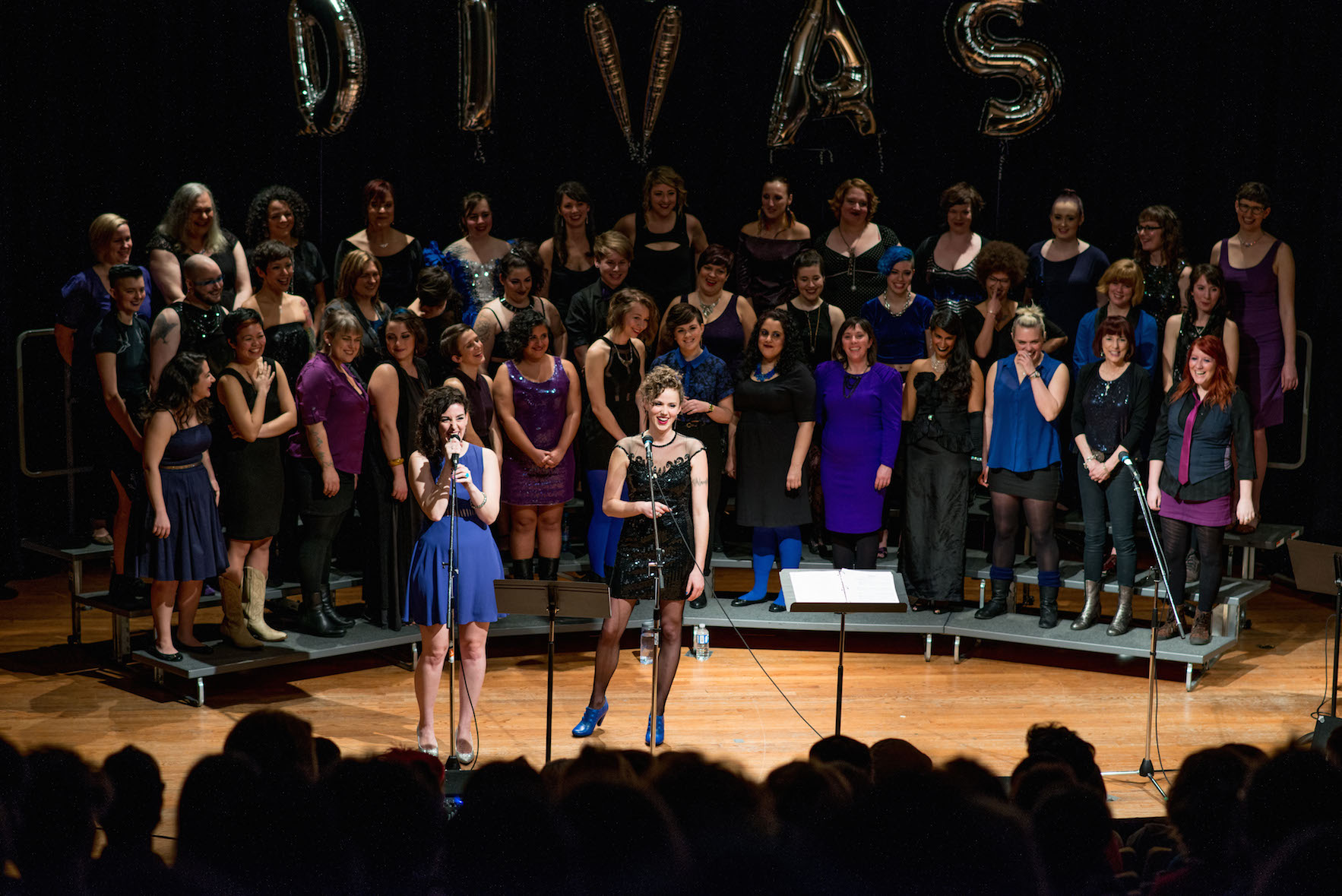 Femme City Choir, now in their second year, add a new voice to the city’s legion of choirs. This ensemble, however, is a little different from a traditional choir. Fighting femme invisibility one song at a time, Femme City is an all-genders, queer and trans* centred femme singing extravaganza. Choir members come from various levels of musical experience, and, for some, the Femme City Choir diva concert is their debut public performance.

The group routinely performs twice a year and at festivals like New West Pride, lighting up stages with sequined costumes, exuberant voices and joyful queer activism. Their performances are equal parts fabulous and radical: Femme City inflect pop songs with newfound queer meaning and politics. Through some musical femme alchemy, the choir can make a Taylor Swift ditty about bullying resonate on a new queer frequency or use Robyn’s viral dance hits as a way to look more closely at femme competition. The choir is a powerful display of fierceness and solidarity uniting about 40 singers of various femme presentations.

To this end, the performance also included a spoken word component as members recited meditations on the meaning of diva penned by both singers of Femme City and famous prima donnas alike. The mini-speeches emphasized topics such as resilience, radical femininity, and daring to perform and take up space, speaking to counter the misogyny femme-identifying folks can encounter in both queer and non-queer spaces. 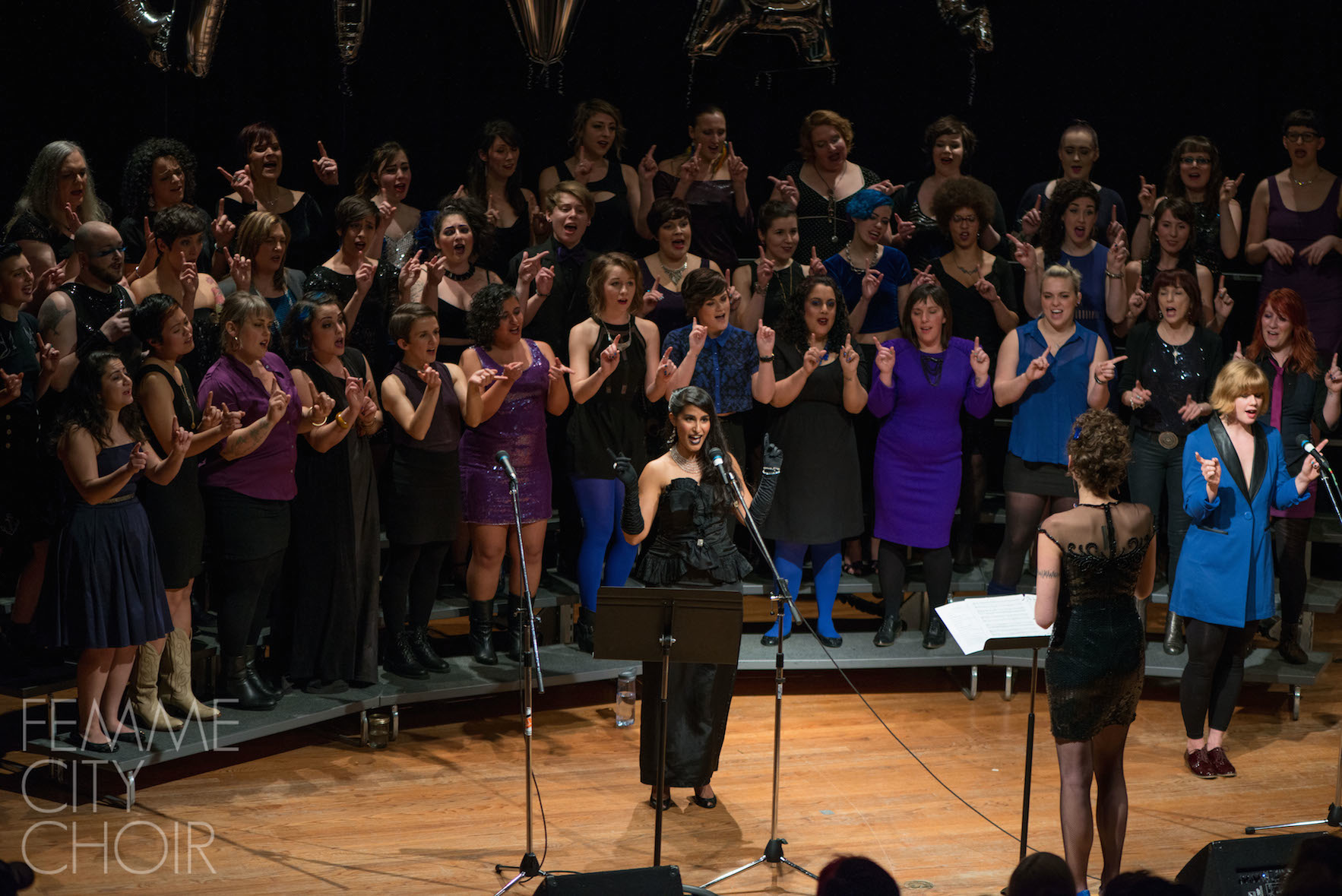 The repertoire of the diva-inspired recital was decidedly retro, reaching all the way back to the origins of the gay rainbow with “Somewhere Over the Rainbow” and sliding through the 60s and up to the 90s. The choir hit such staples as The Supremes’ “You Can’t Hurry Love,” Roberta Flack’s “Killing Me Softly” and a glorious mash-up finale of Gloria Gaynor’s “I Will Survive” and Destiny Child’s “Survivor.” A band of drums, piano, bass and violin accompanied the femmes as they sang and sashayed throughout the evening. 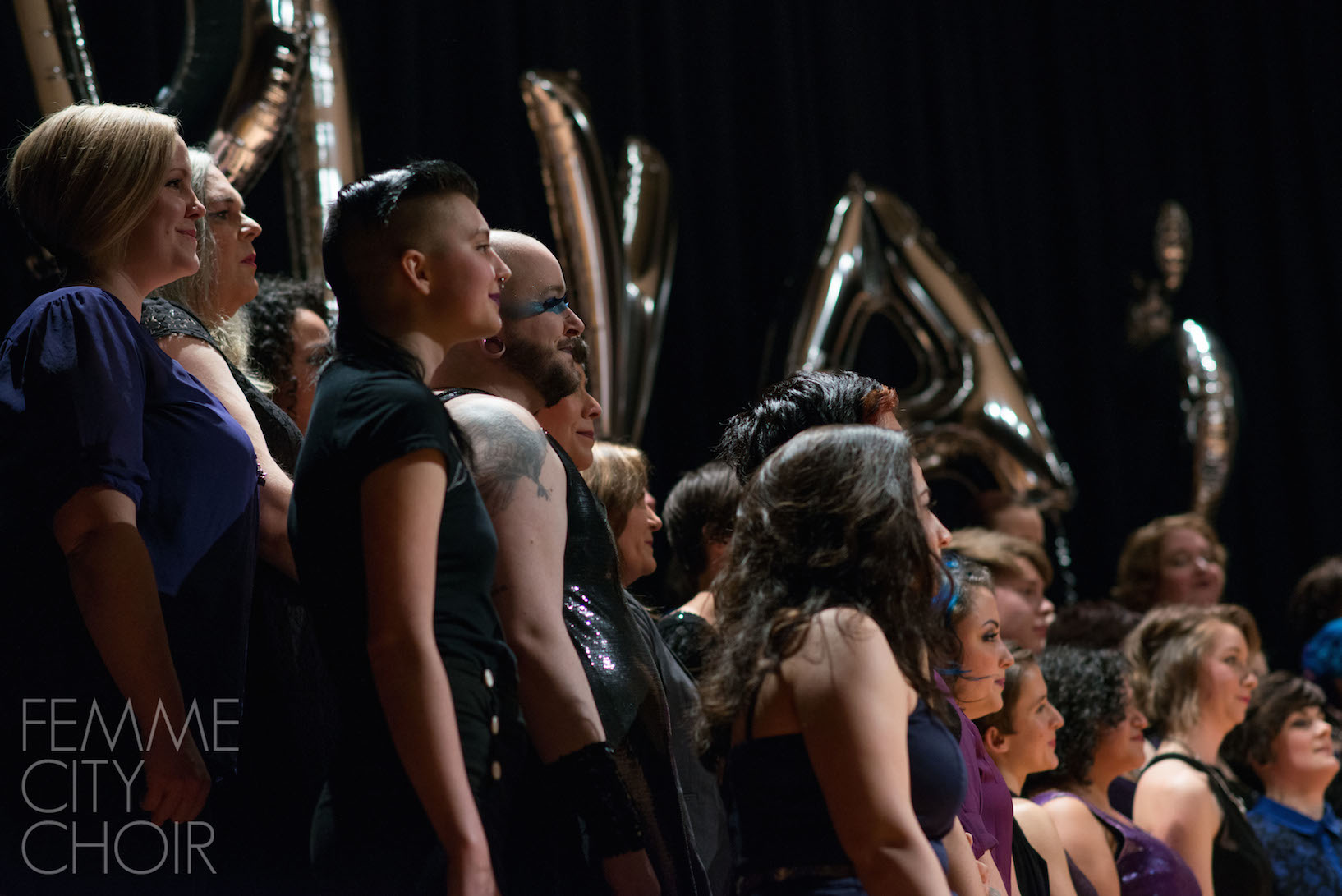 The most gut-wrenching number came a little too soon in the recital. For their second song, the femmes scaled the emotional mountain that is Stevie Nicks’ “Landslide,” their voices bolstered by gorgeous and subtle violin. When the three soloists began the first verse with a slow, vulnerable gait, I figured it was too early in the night for tears, but by the time the full choir joined in and the chorus came around the bend, audience and choir members were visibly crying (myself included). Barely out of the gate and already the femmes reduced us to puddles. 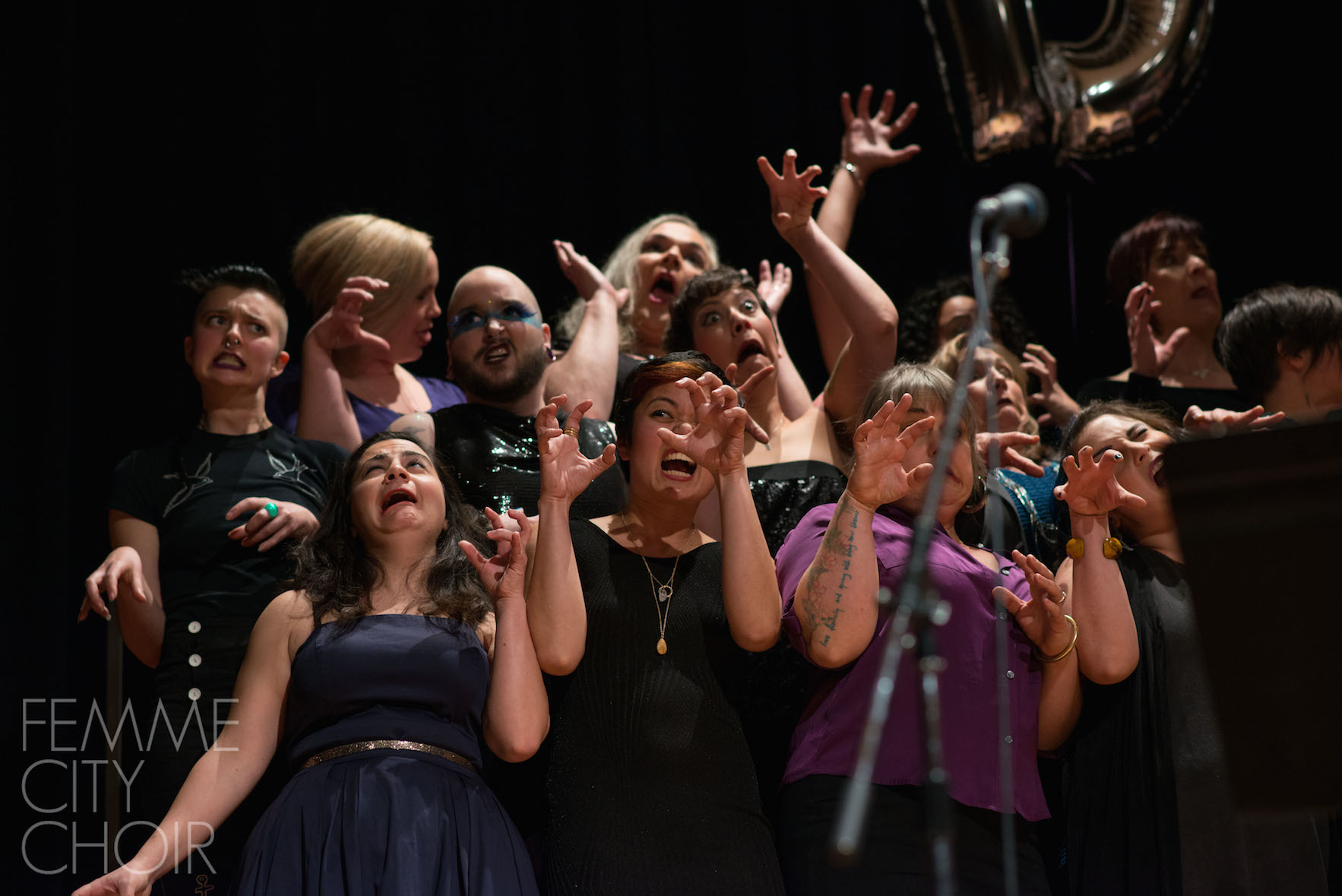 Femme City Choir also tackled a Michael Jackson medley that sewed together MJ’s somber ballads with his upbeat romps. Replete with zombie choreography, the femmes’ rendition of “Thriller” was the right kind of cheesy that brought a welcome playful energy to the concert. In a similar spunky vein, the choir performed an unlikely yet catchy mash-up of Hanson’s “MMMbop” and “Oh What A Night” from the musical Jersey Boys. Fascinators off to conductor Kate Monstrr and her friskily deft arrangements.

The femme ensemble sparkled and shimmied under the stage lights, showcasing a diversity of voices and gender presentations. Visually and vocally, what the Femme City Choir does, in tandem with reclaiming divas and mashing up pop songs, is emphasize the fluidity and scope of femme identities. They carve out the space for music, magic and changes to happen.

Dancing and Advancing to the Edge