The SHIFT 1-Act Festival was one full meal deal night of theatre, and I my appetite was set for one course. However, here I find myself digesting what they describe as “an uncommon collection of works assembled by a jury of Vancouver theatre innovators.” While some were uncommon – challenging, mind-bending – others were pure crowd pleasers – funny, entertaining.

I saw five plays. I thought I was going in for two, and not five plays in a row. I like to digest one work before seeing another, because much of what I love about art is what I am left with later on, even days after. So here I am in a marathon of short plays. There will be brevity and there will be thoroughness. It’s like a five course meal, some things are eaten quickly and digested quickly, and others leave a lingering taste and take days to process….

This Time I Get What I Want

Written and Performed by Jennica Grienke

Jennica Grienke is watchable. You like watching her and listening to her and you can tell she likes it too. A true performer. This is what draws you to staying with her through a theme that has been done and redone ad-infinitum: the flawed, lonely starlet in search of redemption from the mundane plights along the route. Grienke draws us into a vulnerable drama: her private reactions to loneliness and feelings of failure that most of us have at one time felt. With self-deprecation and wit she takes us through hilarious coping mechanisms that are both absurd and relatable, like eating cake while working out, reliving past victories, and searching through craigslist for an easy answer. 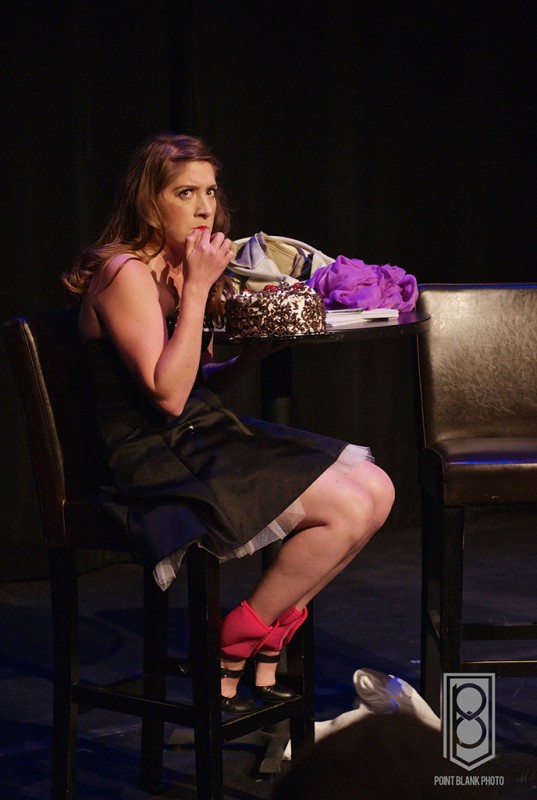 Jennica Grienke in This Time I Get What I Want. Photo by Travers Jeffers, Point Blank Photography

The Merchant of Showboat

The Merchant of Showboat confronts issues that many of us are afraid to address. The continuation of racism and bigotry is often ignored in the face of power, money and privilege, and this play puts our proverbial noses right in the mire. It stinks, it’s harsh, and it makes the heart beat faster.

The Merchant of Showboat asks the person with the power to present art to question the message and political implications of such presentation. The Merchant of Showboat follows the Toronto Show Boat musical controversy, in which it was met with staunch disapproval and protest from the black community for its racist and demeaning characterization of black culture. 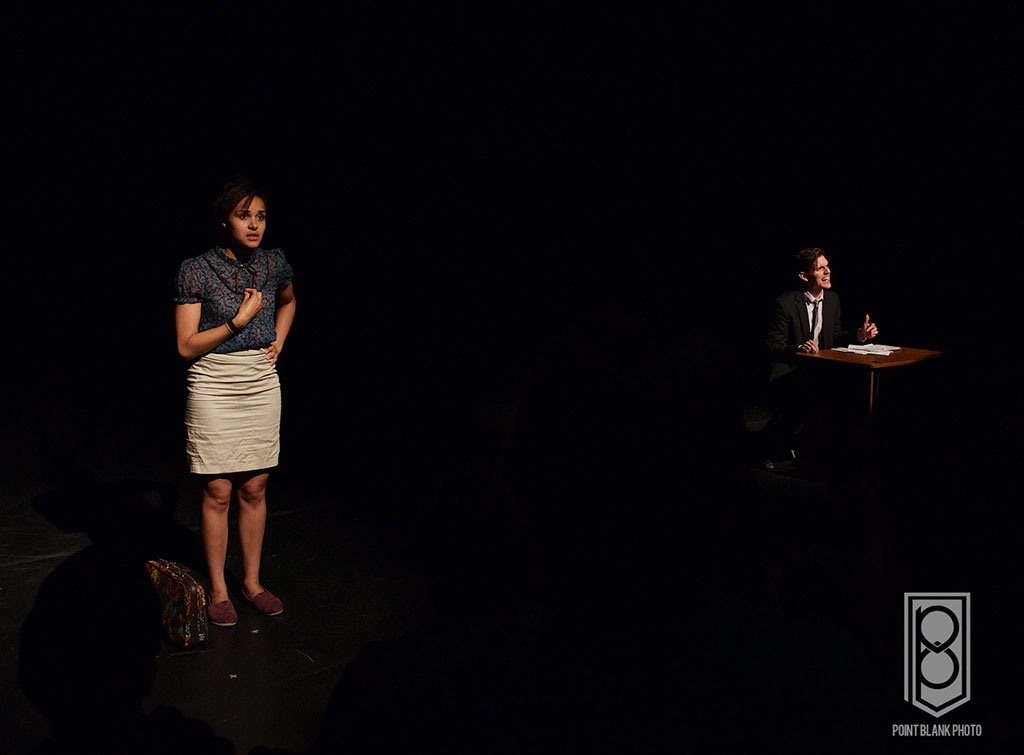 The play depicts an argument between a protestor and a presenter of the play. The tone of the actors delivering this raw material is straight forwardly pointed, unyielding, and makes my eyes widen so consistently that I actually need to blink because they are getting dry. I don’t mean to say that it’s visually active, in fact, the two actors stay fairly immobile the whole play, staring very directly at the audience as they converse (though they are the ones having the conversation). This is a smart, direct choice, and speaks to what I read as a play built for social change, built for the audience to feel as though they are being provoked, questioned, and asked to address the issues just like the characters in the play must. 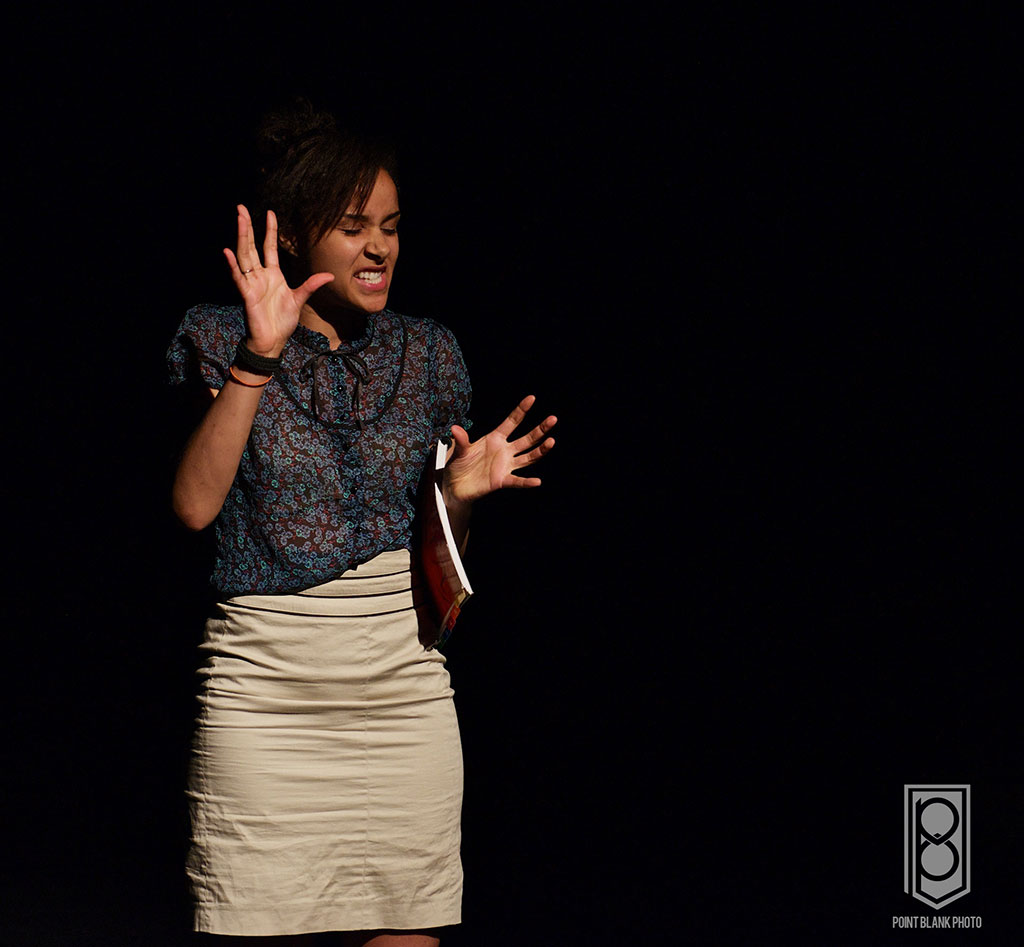 Having a gift or talent is sometimes attributed to privilege, luck and being blessed. Maintaining a positive personal relationship with the gift can sometimes take a back seat, after making sure that we are successful producers or exemplifiers of such a gift. Desire(e) provokes us to leave something for ourselves through the story of a woman whose gift is birthing children for other people, and reminds me of people in my life who love to help others but do not help themselves. The character births many for others, and when she is ready to have one of her own, she is no longer able to.

The play is emotionally comforting in its tender exposition of surrogacy and its concurrent feelings of loss, to the ways we can better understand the mortality of our own energy and vitality. Chenosky’s performance is physically and sonically sensitive.

There is always a purist who asks: is that really theatre? Is that really dance? Is that really art? My question is, “Does it artistically move me towards questions in a way that art only can?”, and if the answer is yes, it almost doesn’t matter if I understand the path the artists took to get me there.

PKD Workshow had me wading through weighty existential no man’s land with whimsy and style. First of all, I was given the opportunity to guess whether or not they were being truthful about the nature of their performance. A play about the late dystopian, science fiction writer Philip K. Dick, PKD Workshow blends the psychological journey down the rabbit hole while blurring our vision of reality and theatre.

The performers started with a speech saying that they were grateful to be sharing the stage with “more polished shows” and that this would be a workshow. There would be pauses to change scenes and whatnot. At first, I genuinely believed this. It put me into a frame of mind that set me up for the rest of the content, which dealt with the perception of reality, drugs, and transformational turning points in a life.

Philip K. Dick, we learn, had one such experience, that is relayed to us through one of the actor’s own experiences on drugs, getting lost in the forest and questioning the fundamental way he looked at life. This is an incomplete exploration of one author’s mind trip, with bits of information, scenes getting cut off, transitions that are crunchy at best, startlingly uneasy at worst (and best!).

The two actors look the same, so much so we think they are the same and relay to one another in this way. Shadows of their profiles are cast upon a bleak backdrop, overlapping, metamorphosing, and moving together. I learn later (thanks Wikipedia) that PKD had a twin that died at birth and that her absence informed much of his work. 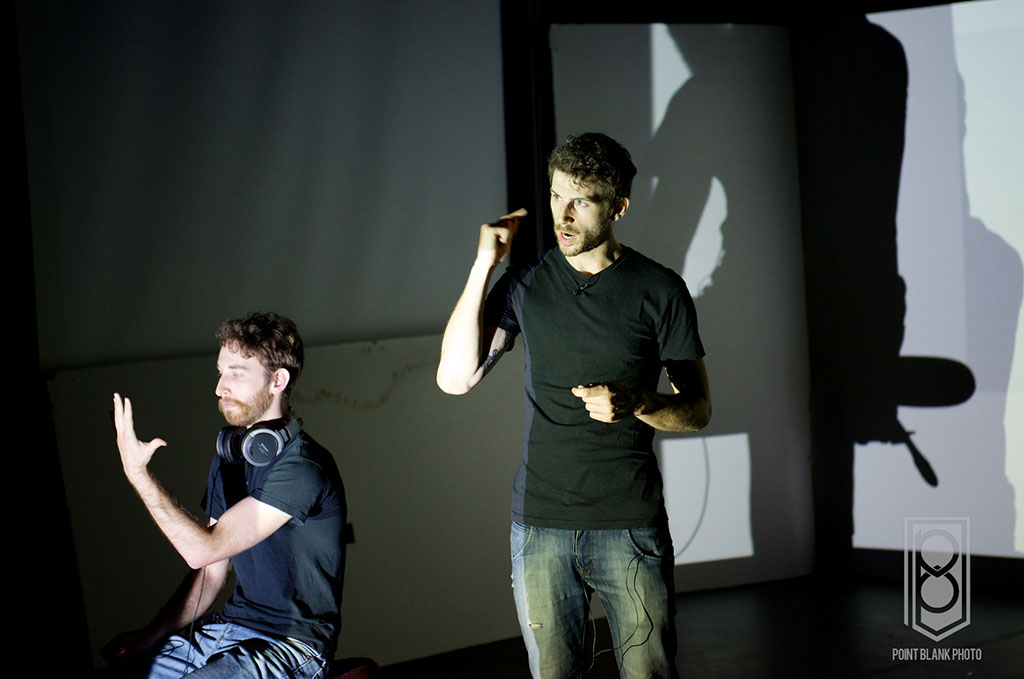 The play does not unfold in any sort of linear fashion. My sense of it then, and how I recall it now, is a veritable mash of moments. A scene abruptly stops, one actor leaves the space, and there is some confused banter between the actor, the video designer and the sound designer. It seems decisions are made in the moment, haphazardly but presently. 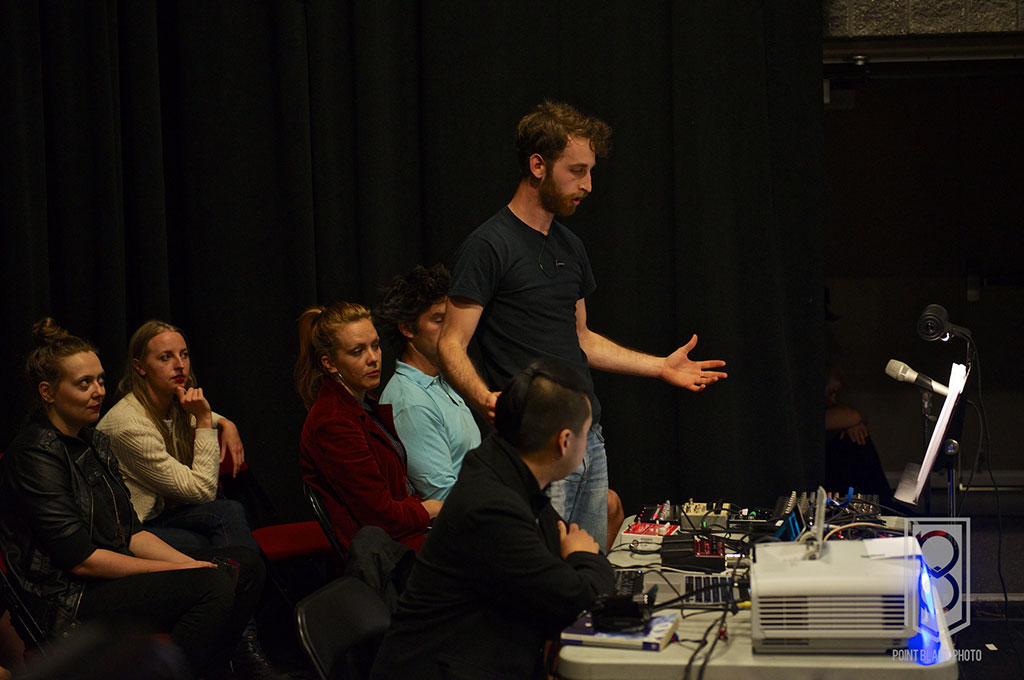 Here, in the PKD Workshow, there is a searching for that which cannot be found with any finality. A line in the play illuminates this never ending desire for true perception: “Pseudo-reality contaminates reality until the lie is undone.” We cling to our perception of reality in a constructed sense, in a sense that can be unconnected to experience, and sometimes stubborn to sit within. There is self-revelation in the play — a kind of resignation to the fact that we are relying on sides of ourselves to portray something, some kind of complete image to the world, but that representation is being continually falsified and reinstated by new perceptions and reflections on what is and what is not. 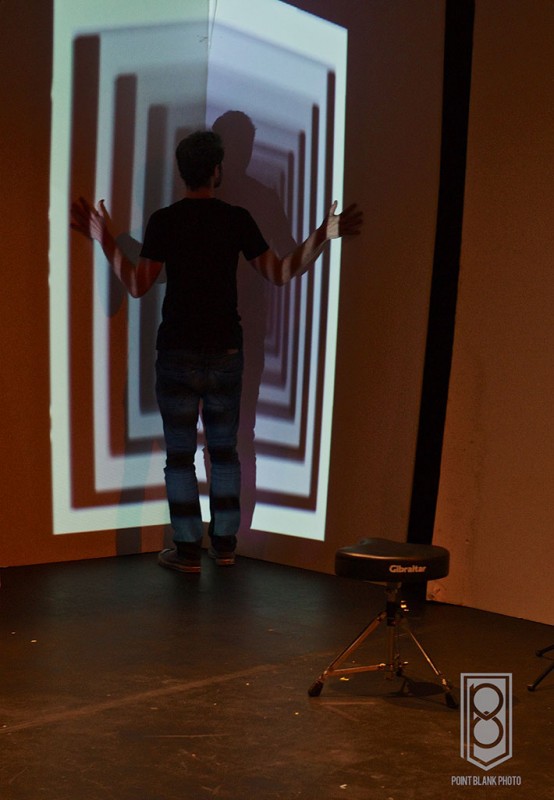 A projection of a never ending series of doorways extends into a cardboard corner. The actor stands. The actor’s every cell moves into those doorways before taking the physical step to be met abruptly by the (real?) physical obstruction. The video and sound are reflections of the text and are shaky and hard to settle into. It is as though they are moving towards something, knowing the final score but never being there, never truly providing clarity. This lack of coalescence is purposeful, I think, and is echoed in the quality of performance from the actors. They are being real. Or so we are led to believe. The question is continually thwarted upon us. Our presence is questioned by one of the actors: “If I forget who I am, can I trust the world to tell me?”

The After After Party (Waiting for Gordo)

Written and Performed by Katey Hoffman and Cheyenne Mabberley, Directed by Kayvon Kelly

Katey Hoffman and Cheyenne Mabberley provide a funny and fun trip through the after-thoughts of two partiers. The After After Party (Waiting for Gordo) is quick on its feet and animalistic, yet with cultured and local references and one liners that provide true bursts of laughter, like the laugh track on sitcoms was always trying to reproduce. We are presented with two guileless party goers who are having moments of brief revelation that are on the verge of emerging into something transformative. The first few times, this revelation is stopped short of the catastrophe that could ensue: “The party portal! Don’t open it!” one actor says to the other as she aggressively grabs the other’s mouth and closes it. 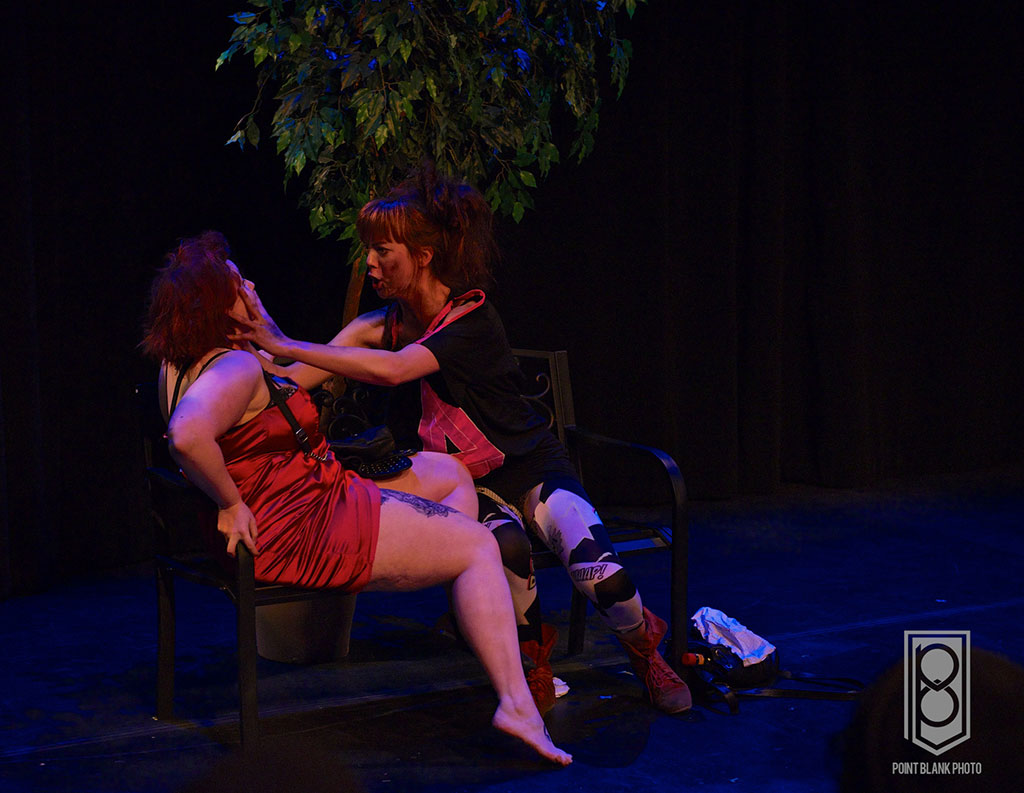 Katey Hoffman and Cheyenne Mabberley in The After After Party (Waiting for Gordo). Photo by Travers Jeffers, Point Blank Photography

Information is best left unsaid, but when it comes out it is unrestrained. The script contains several local references, built to make a Vancouver audience laugh. The rhythm of the dialogue is quick, sprightly and fresh feeling, with the style of stand-up or improvisation. At first I felt the caricature-like style was a bit heavy handed, but as it developed, a slight clowning quality emerged and I fell for it. Entertaining and a bit over the top, it’s uproarious and unabashed theatre.