A collaborative review of Bulletins From Immortality 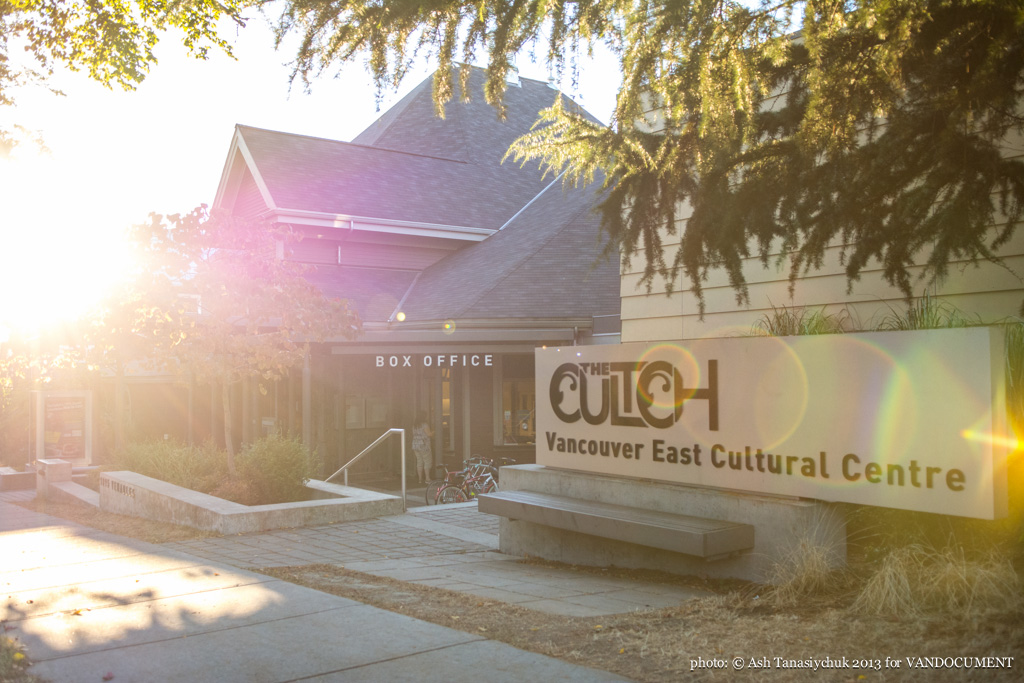 VANDOCUMENT’s Hailey and Shalon checked out the sold out world premiere of Bulletins From Immortality at The Cultch, a collaboration with Margie Gillis, American acting icon Elizabeth Parrish, and developed with the Stella Adler Studio in New York City. The show was created to celebrate the revolutionary poetic work of the late Emily Dickinson. Shalon and Hailey sat down for coffee to discuss their thoughts following the show.

Setting up of Relationship Between Gillis and Parrish 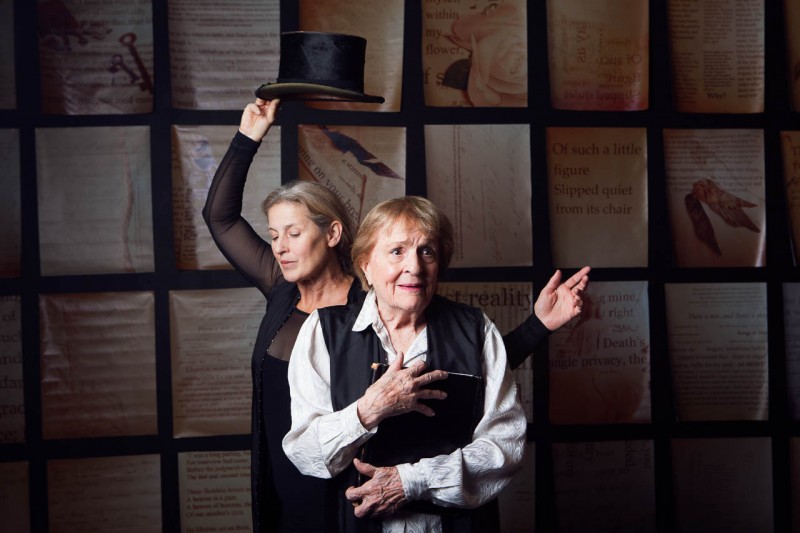 Hailey: The two performers entered the performance space. I immediately felt the presence of the two as matching, as one, as a sort of twin energy. They seemed to embody a similar history and a depth of intimacy with the work of Emily Dickinson. When this bond became fragmented, I lost this intimacy and its context as opposite ends of the same spirit. This happened when the poetry and movement became separated and was depicted as literal interpretations of the other. There was an inimitable intimacy when the extreme depths of Parrish’s vocal bellows met the soft yet electric sensuousness of Gillis’ flutters, yet these moments were fleeting for me.

Shalon: I had a slightly different reaction to the connection between Gillis and Parrish. I felt that their energy was mostly in sync throughout the show, and that there was an intentional split between the world of the mind (Parrish) and that of the spirit (Gillis). In some ways I felt there was some kind of masculine/feminine thing going on between them (the age old reason vs. emotion), but that ultimately the two were one. I was able to maintain the link between this relationship throughout the show. Gillis seemed to dance the imagination of Dickinson, while Parrish spoke her mind and thoughts. 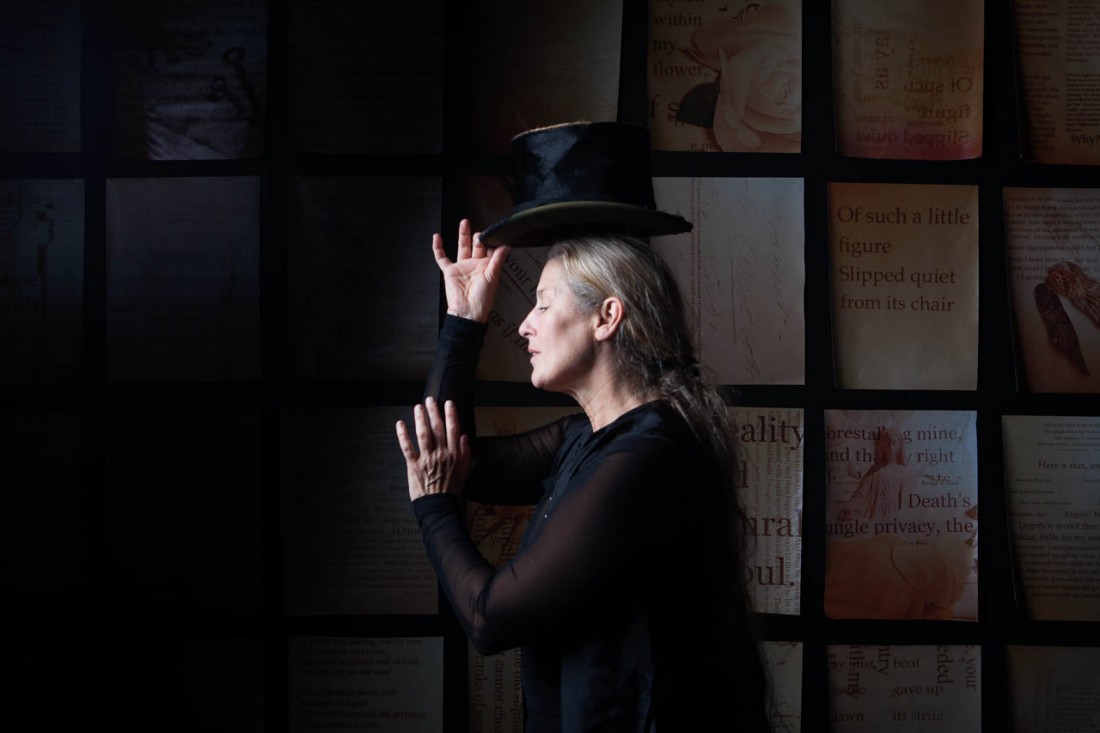 Shalon: Gillis began her interpretations with a kind of nostalgic longing, a confusion, a lostness — she appeared to be waiting for the spirit of Dickinson to consume her, or for the words to infuse the dance. The solo interpretations were dreamy, filled with flowing motions accompanied by piano; her body thrown around by the mind’s whimsy. A girl-like curiosity informed her movements and an uncomfortable sentimentality came through. The constant changes in tone highlighted the inumerous fleeting changes of life, emotions, the mind, and ideas. The dancing itself felt dated, and left me wanting something with more of the raw edge of Dickinson’s poems. Gillis is a sensual performer, with the sounds of her breath keeping time, her long flowing hair and swift movements definitely felt alive, but I couldn’t help feeling that some of the interpretations were too literal and I was left wondering why a poem couldn’t remain a poem, and a dance a dance…

Hailey: To me, these interpretations signified an element of modern dance that is innately driven to connect with the essence of movement. It is about the purity of the moment, the purity of the emotions, and the transcendental experience of movement regardless of specific forms of context. I didn’t see layers of story, subtext or even sensation. What I saw was Margie Gillis’ iconic and unbridled enjoyment of dance. I saw a history of modern dance living in her body, a sense of commitment to the beauty of movement harkening the ilk of Isadora Duncan. The times that brought me closer to her as a performer was when she accessed the most extreme exhibitions of this kind of sensuousness, but I got lost when she interpreted the text in more literal ways. I wanted to be drawn into the depth of death and existence but was stopped at the doorstep, watching from the outside. I wanted the dance to show what it’s like to be alive, the desperation for mortality, like how someone wants to feel when they dance.

A power of Butterfly must be – The Aptitude to fly 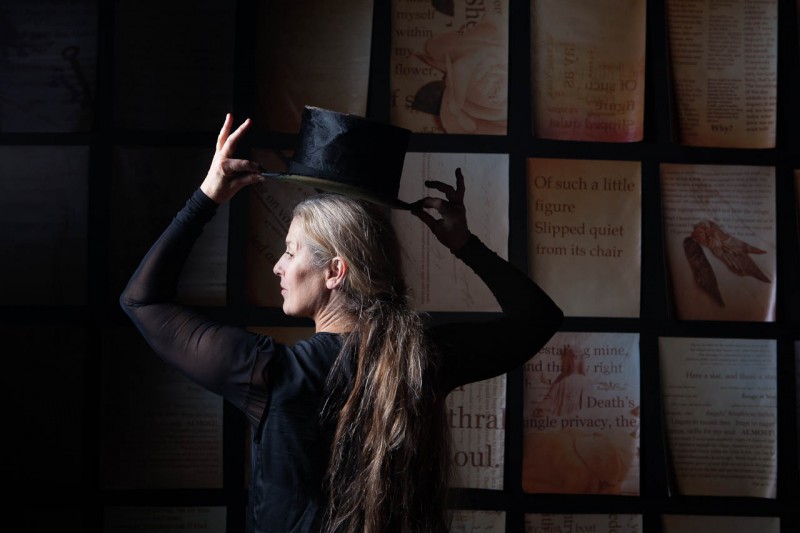 Shalon: The simple stage (created by set designer Randal Newman and warmly lit by Pierre Lavoie) was adorned with 95 cloth-like posters hanging on the back wall with excerpts from Dickinson’s writings, and everyday images of birds, buttons, clocks, keys, eggs in a nest, crosses (these images all reflect the solitary and domestic life of Emily Dickinson). There is a contrast between the seemingly mundane and sheltered world Dickinson inhabited, and the fantastically magical world she created in her mind. Dickinson lived a cloistered life, but it is obvious through her poems that no moment was uninspired. A single chair placed on the stage is covered with Dickinsonian text, a reminder that what is inanimate can also be alive, and that in the world of the imagination, all things shine brightly. The selected passages of poetry in the piece (both recited and read visually by audience members) were excellent choices animated brilliantly by Parrish’s intonations, that narrowed in on the cutting intensity and truth of Dickinson’s words.

Everyone I meet is God, every street existence.

Hailey: The colouring on stage seemed deliberately natural, but also made me not care what was depicted upon the posters. They really turned into one continuous wash of colour for me. Nearing the end of the piece, however, Gillis removed three of them in a state of furor, as if to tear memories out of the ground that kept her mortal. I can’t tell if that is what I saw because I had seen a similar movement in that context in a show I saw the week before, or if it genuinely was being provoked in me in that moment. 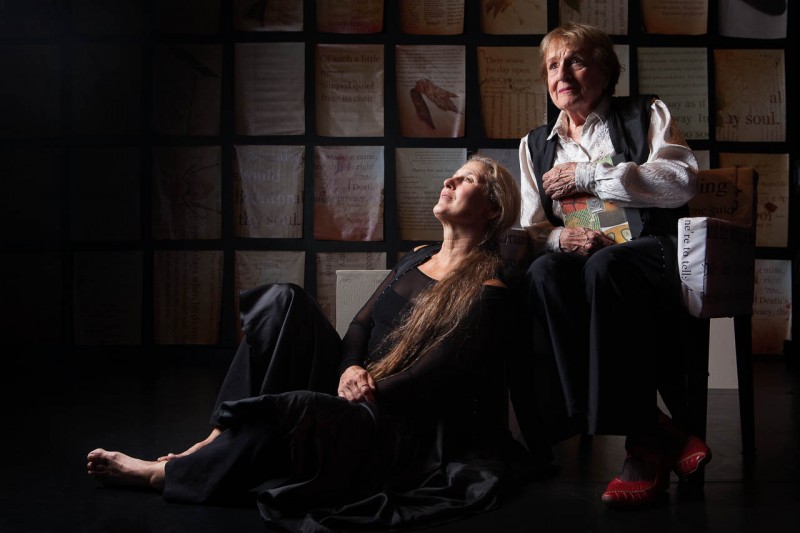 Shalon: Both women were clad in long flowing cape-like black vests which at points doubled as props — at once Gillis powerfully transformed the costume into the flapping wings of a bird. Other than the brilliant period piece red shoes that adorned the feet of Parrish, the costumes were simple and graceful with a sort of 90’s gothic flair. The mesh, shoulder baring top that Gillis wore under her cape distracted me, as I saw it as a rather large departure from the feeling of Dickinson (whose iconic plain white dress is more what I associate her with).

Hailey: I thought that the cape-like robes that both performers wore were both age- and era-appropriate. They likened the performers to the darkness of crows, an austere Victorian aesthetic, and at times the literal representations of a bird. While this animal manipulation was undoubtedly performed with a refined finesse, the tone that was held in this darkness stopped short of descending me into the true abyss that I craved. A great distraction was the tank top that Gillis wore underneath a gauzy outer layer: it inched lower and lower on her bosom and admittedly distracted me with discomfort at the possibility it might expose her. Don’t get me wrong, I am not a prude and feel that nudity can be accessed intelligently, but it certainly did not seem purposeful in this instance. 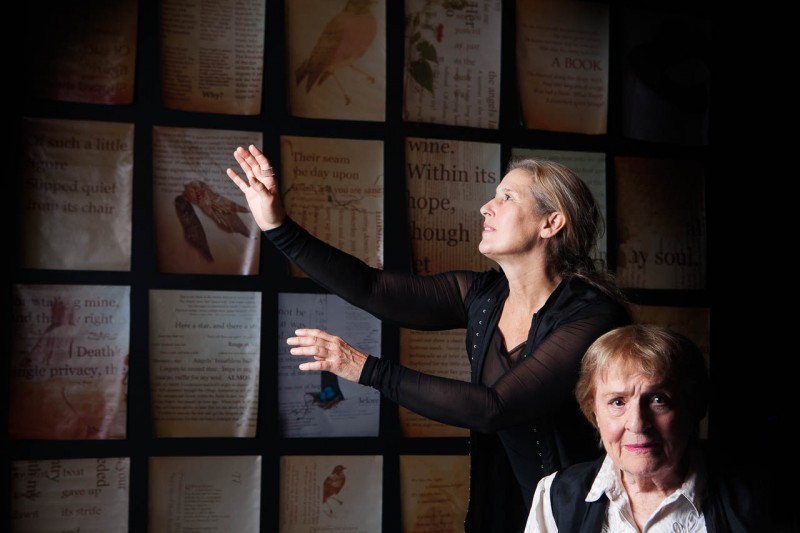 Hailey: The tone of voice of Parrish held me the whole performance. Her sense of finality and resolve felt connected to the desperation and searching in much of the poetry. As I said before, when Gillis and Parrish performed as one being evoking different ends of the same thing, I felt connected (albeit tenuously) to the clarity of the words and the ephemerality of the movement. When they occurred separately, I found my attention could not commit to either fully — I felt pulled in one direction only for it to stop short of gaining my full commitment, then the focus would switch to the other performer. When it worked for me, Parrish was severe and motherly at once, and Gillis was flittering and subtle. They both seemed to always be flirting with the idea of immortality as though it was something untouchable, and this held me back from really getting to the heart of how uncomfortable and bittersweet death and the contemplation of it really is.

It’s all I have to bring today – This, and my heart

Shalon: The ability to live forever is something that Emily Dickinson may never have known that she would accomplish throughout her life, but clearly she achieved just that. Her voluminous contribution to poetry has been widely influential, and she was far beyond her time as a female writer in the late 19th century (her poems did not become widely read until the late 1950s). A pioneer in the world of avant garde poetry, Dickinson was taking risks that were not acceptable or understood at the time of their writing. Dickinson was rejecting the traditions and conventions of her poetic time outright, and she relied heavily upon her own creative impulses and internal voice to create her work. The power and voice of Emily Dickinson is so strong, it needs no help in keeping it alive, which is perhaps why I struggled so much with an interpretation in dance form. Nevertheless, having a visual, theatrical presentation of the poems was pleasant to my senses, and thus entertaining and enjoyable. The very act of reading Dickinson, though, activates something very alive in one’s mind — it provokes imagination because it is written so that one must rely on their own creative impulses to follow through creation of images of the poems. The question I was left asking myself was, does Emily Dickinson’s poetry need interpreting through dance? There is something interesting, however, in witnessing the merging of these two very different, yet somehow inherently similar realms (the dancing body and the poetic mind). Somehow in this process, a new ghost is created.

2 Responses to Ghosts of Emily Dickinson