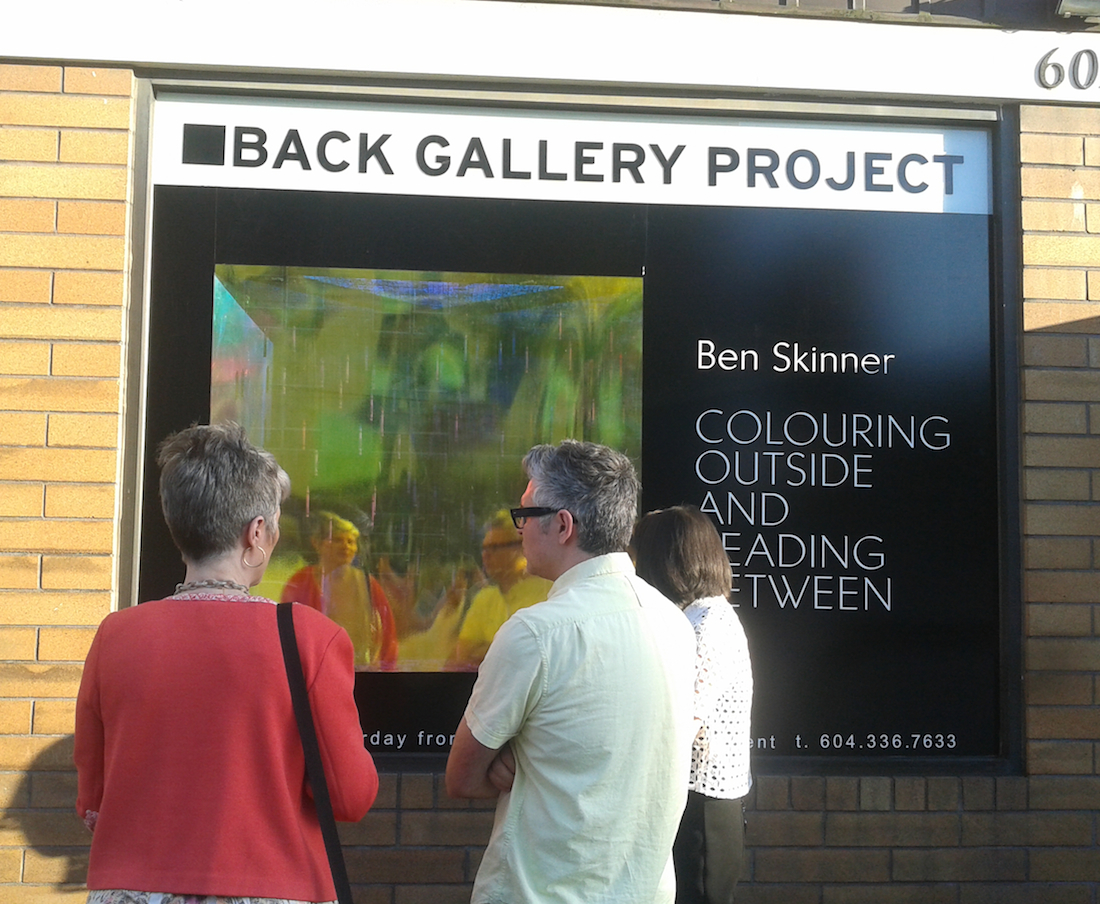 Like many art galleries, Back Gallery Project has a generous display window at the front of the building. While not an unusual architectural feature, this window always seems a little special. It is a large, open portal on a particularly blank stretch of East Hastings, illuminating the otherwise forgettable streetscape in ways far more astonishing than by simply hanging paintings or propping-up sculpture. The front window installation for the current show – Ben Skinner: Colouring Outside and Reading Between – is a prime example of the magic BGP and its artists produce in that space.

If buildings of the 600 block of East Hastings are nondescript, and feel lifeless and inert, the adjacent roadway bustles with activity as cars, buses, and cycles slide past on this major urban artery. This frenzy is projected back toward the street in a real-time motion picture show via a yellow-tinted mirror on the face of the gallery window. The images are reflected back at anyone lucky enough to be gazing into it. They present in slightly skewed optics – less structured than, say, a funhouse mirror, but every bit as captivating. The distortions are vaguely psychedelic and certainly hypnotic, particularly when coupled with the unnatural colouration. And as the gaze is drawn ever-more-deeply into the reflection, one comes to realize that being “drawn-in” is not simply a metaphorical description of the viewing experience; the work has actual, physical depth. The mirror is translucent and, when peering past the reflection, one sees that, in the chamber behind, children’s crayons are suspended as if floating in space. This is the metonymic engine-room of Ben Skinner’s living motion picture maker. Colour is the driver.

The clever title of the show clearly demarks the two general thematic explorations of Skinner’s work here: colour and language. Most of the works are raucous, explicit, interplays of colour-for-colour’s-sake; but, even within these explorations, Skinner is not wedded to any one technique or conceptual approach. In one piece, he plays with twin paint-by-numbers recreations of Thomas Gainsborough’s “The Blue Boy”. In the one, he colours according to the script; in the other, he reverses the chromatic arrangement, creating the equivalent of a photographic negative. In many of the other pieces, he uses minimally manipulated materials – often simple art supply store tools of colour creation – to array patterns of colour. Rather than drawing with a crayon, the crayon itself becomes the object of colour. Rather than selecting and matching colours using the Pantone system, the colour chips themselves are placed into collage. It is an intriguing “reverse synecdoche”, with the whole representing just a part — albeit an essential part — of the object. This dynamism is on full display in the piece entitled “The Colour Field”, consisting of tidy rows of coloured pencils to construct a sort of bed-of-nails. This work is not only thrilling for its clever application of the colour-medium to represent the colour itself, but also for the way in which its three-dimensionality comes alive as the one’s point of view shifts. 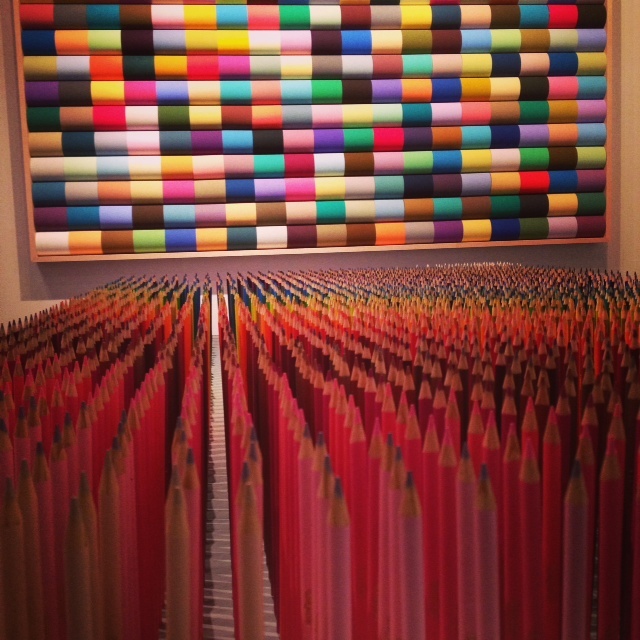 Like many of the exponents of the primacy of colour, Skinner generally eschews brushwork, texture, or other forms of variegation within his colour swatches, presenting the hues clearly, cleanly, and without a lot of formal embellishment. His work feels devoid of staunchness or dogma, however. The play of materials is free-ranging and expressive and the work often evokes a joyful, contemporary constructivism or the kinetics of an artist like Yaacov Agam. This effect is seen in the simple paper collage he calls a “Colouraid Grid”; in a traditional barber pole bearing untraditionally hued candy-stripes (“The Barber’s Dilemma”); in the jigsaw-patterned “1000 Piece Pantone Colours Puzzle”; and, of course, in the translucent mirror piece supplanting the gallery’s front window.

The second explicit theme of Skinner’s exhibition is word-play. Much of this has a simple, direct, textual approach that seems to pay a degree of homage to Vancouver-born artist Ken Lum – perhaps with the wittiness dial turned-up half a notch. Whereas Lum might mimic low-end billboard advertising to provide relief for sneakily dramatic messages from mundane lives, Skinner seems to play subversively within the realm of low-brow, T-shirt-ready slogans. These works boast aphorisms and utterances like, “SICK BUT NOT THAT KIND OF SICK”, which opens-up a mischievous ambiguity in the very statement that purports to supply certainty. (So: which kind of sick are we talking about?) The cleverest of these works consists of a few simple lines of teen-speak poetics / Buddhist philosophy, rendered in silver on simple Lucite “HE WAS ALL / AND I WAS ALL / AND THEY WERE ALL”.

Far more compelling from the body of Skinner’s word-play work are a series of spatter-coloured, plaster-cast, text-embossed brick forms – with a typography at-once recalling children’s letter blocks and the work of Jasper Johns. The word-bricks are paired, thereby creating a repetition that produces a series of echoed-word phrases – as in the clever, self-referential title of the piece, “SAME SAME”. 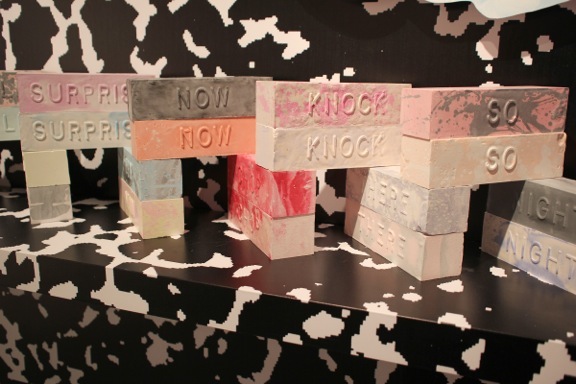 This impressive show opened to a full house on 5 June. It had been scheduled to close on 28 June; but the response has been so enthusiastic, Back Gallery Project has decided to extend the show to 15 July. Mónica Reyes, the founder and director of the gallery, cites the strength of the work and its overwhelming popularity for the extension; and she adds that the bright-hues and lightheartedness of the work seemed to make it “a great show to have up on these summer days.” That’s hard to disagree with. Go see “Colouring Outside and Reading Between” while it’s still on. 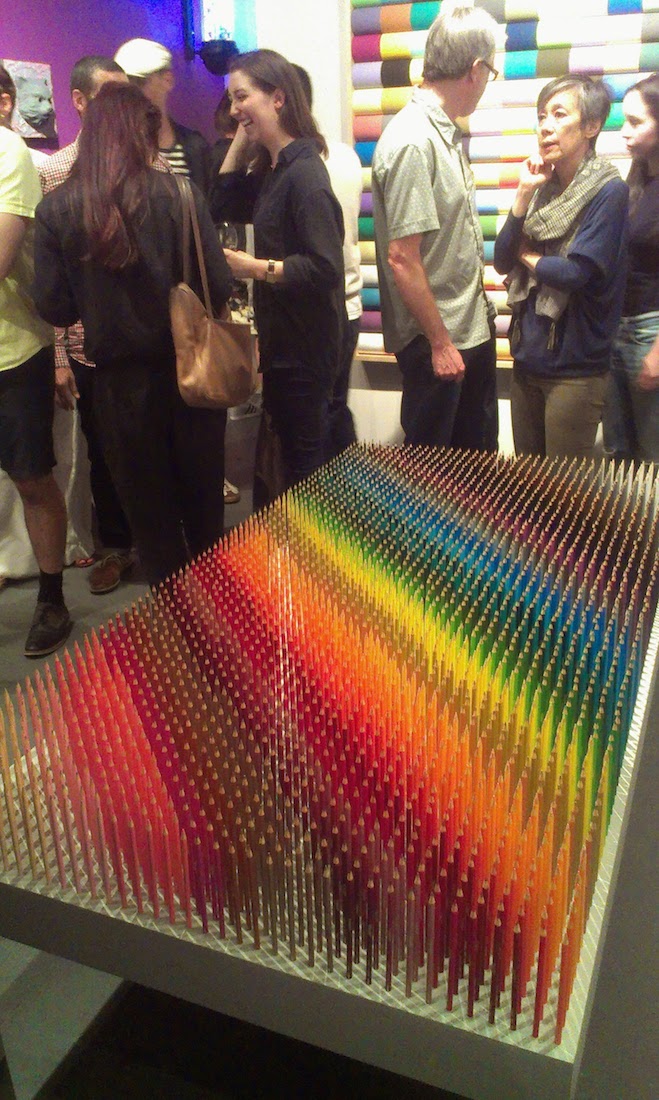