Disparate geographies and contemporary art in Vancouver at Back Gallery Project 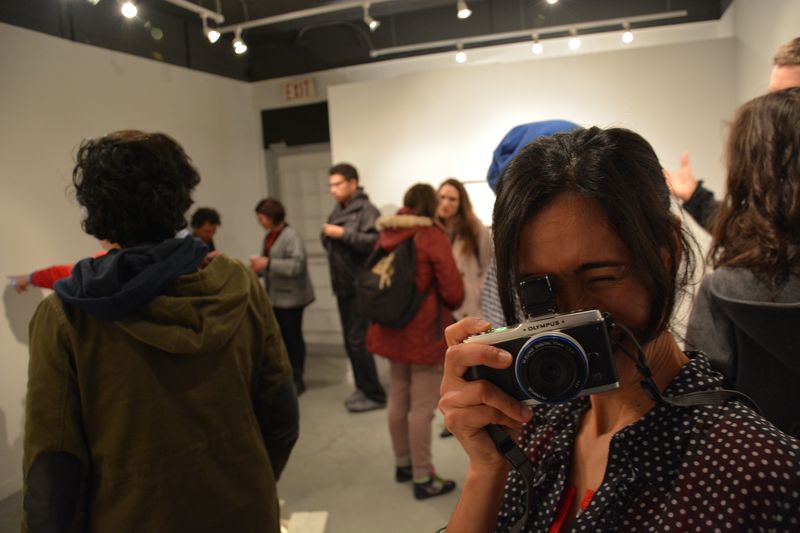 Diffractions of the Local is the first in a series of activities by a group of artists formed in disparate geographies, with varied cultural and artistic traditions, and currently living and working in Vancouver. This two-part exhibition (which includes video, durational performances, spatial interventions, poetry and sculpture) does not convey a unique statement. Rather, it is attempt to interrogate how artistic sensibilities, world visions, political stances and modes of social engagement formed elsewhere morph, adapt and contribute to Vancouver’s artistic landscape. 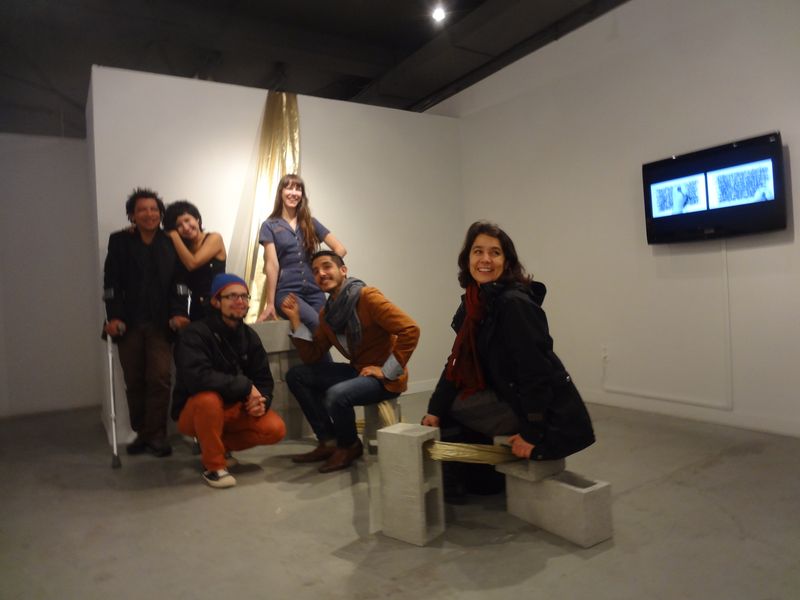 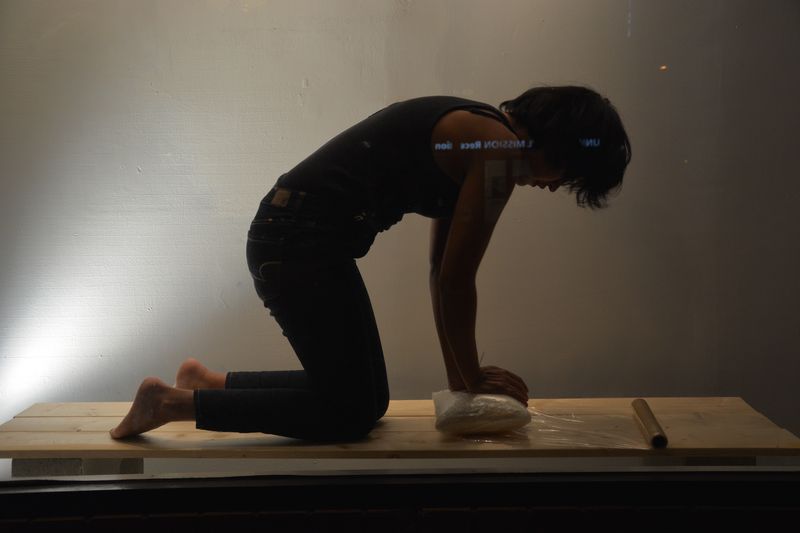 To approach the Back Gallery Project on East Hastings Street on the evening of the opening of the exhibition is to be astonished by the stark, pure, repetitive gracefulness of Ms. César performing this durational piece in the gallery’s front window. Over the three hours of the opening – and beyond in subsequent days – she entombs a pig’s heart in layer-upon-layer of plastic wrap. The evidence that a living organism once existed in a certain place, at a certain time is incrementally, inexorably obscured. Sedimentation is no longer delegated to geologic function; nor is it allowed to proceed at an epochal tempo. It is a matter of human will, executed with startling rapidity in synthetic technology.

Ms. César’s performance is a raw explication of the indelicacy of the contemporary imbalance between physis and nomos.  But if it can be read as an environmental critique, the simplicity of the piece allows it to stand as a perfectly functional metaphor for a myriad of interpretive narratives. The indisputable brilliance and versatility of the concept is matched by the breathtaking beauty Ms. César achieves in its realization. 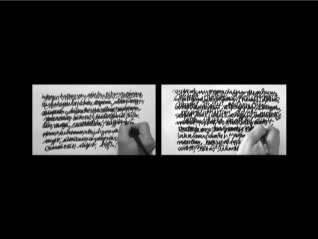 This emotionally resonant, autobiographical performance captures parallel instances of Ms. Aceves’ deft hand compiling lists of words that might describe her. To the left of the two-channel video are the descriptors rendered in Spanish, her native language. To the right, a similar list is developed in English. The concepts that describe us also shape us and constrain or enable our experiences within the cultural context in which we are situated. This stereographic portrait, presented in map-flat two-dimensions, serves as a reminder of the physical, social, and emotional distance traversed in the act of migration.

If language bounds our lives, it is also subject to our manipulation. Ms. Aceves constrains her lists within the frontiers of invisible rectangles. When her writing reaches the bottom-right corner of the spaces, it continues again in the upper-left. The process gradually effaces the ideas which came before; and the newly presented notions are instantaneously overwhelmed by the text that preceded it. Over the course of the 16-minute performance, Ms. Aceves’ writing transmutes simple, seemingly denotative language into topographical abstractions, two black rectangles, in homage to the Black Square and Suprematism theory of Kazimir Malevich. 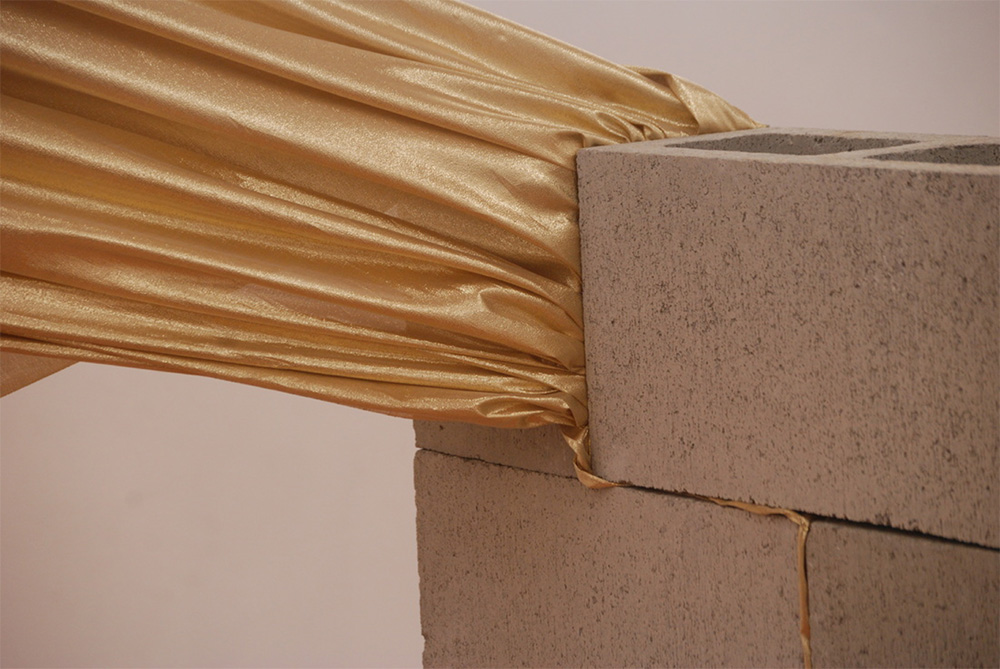 A ribbon of gold lamé snakes through an assemblage of concrete blocks – as if it is the intended construction mortar, as if it is entrapped quite contrary to its own intentions – before escaping the constraints of the block, rising over the gallery room’s partition wall and along the ceiling to exit by the rear door.

Ms. Martinez’s work impresses as an intensely political gesture, but the complex interplays – of both materials and forms – allow it to be read in a number of ways. Is the fabric the binder that gives strength, integrity and legitimacy to the solid, stolid block structure? Or is it the fragile, flimsy subordinate? Are there class inferences to be drawn from the frivolity of the lamé and the bare utility of the block? Does the piece describe a narrative of imprisonment and escape, as the title suggests? Or does it reveal the precarious dependency of the rigid block structure on the dynamics of the fabric? Is the depiction of interdependence one of symbiosis, complicity, or something-else that is far more complex and morally ambiguous? 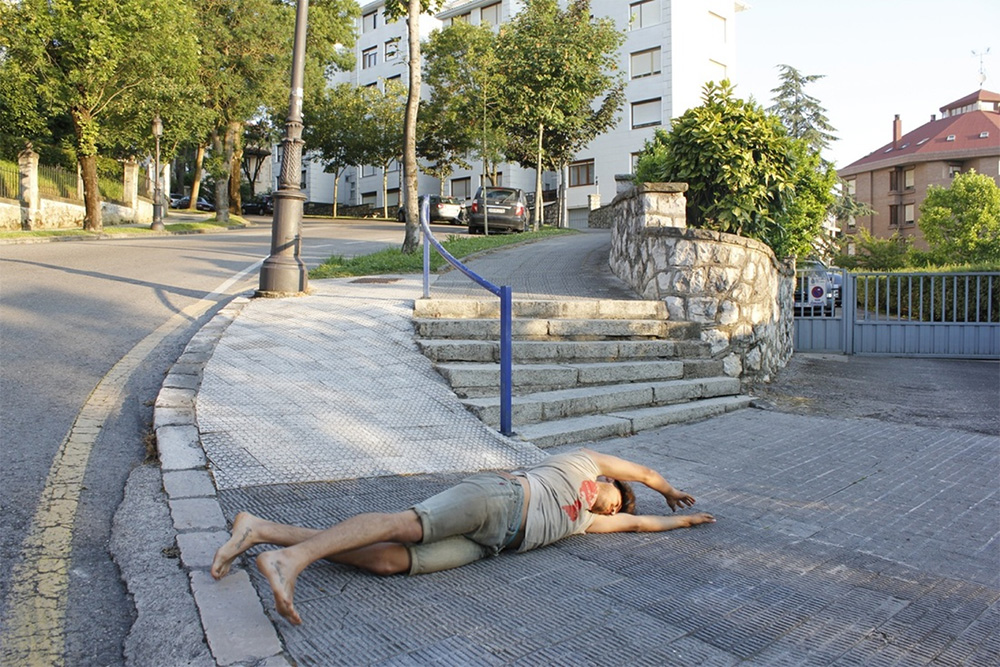 Like much of Mr. Rojas’s work, El Retorno investigates the placement and experience of the body in spaces real and imagined. This, the latest in a series of performances to wrestle with Columbian exploration and proto-colonialism, is a comedy of sorts. Performed and filmed in meticulous stop-motion animation, Mr. Rojas re-imagines himself as a modern-day Christopher Columbus, rolling out if bed (as it were) and down to the sea to conquer the New World.

“Newness,” of course, is in the eye of the beholder. The indigenous cultures “discovered” by Columbus and his colleagues certainly had a satisfactory sense of themselves and their situation before the arrival of Spanish ships. Mr. Rojas plays with the self-centeredness and Magoo-like inability to reasonably contextualize oneself that are essential to the European mentality of “discovery,” and yet which seem antithetical (or at least profoundly ironic) for one stylized as an “explorer.” While (literally) rolling through the streets of Santander, Spain, Mr. Rojas conveys both the monumental undertaking of the exploratory journey and its astounding obliviousness to the significance of the landscape through which it progresses.

And then the video repeats. Once more, Mr. Rojas rolls from bed and through the city streets to the sea. And again. Forever. He is Sisyphus. But then, Sisyphus had it easy: he got to roll a rock. Mr. Rojas must roll his own body. Of course, the crimes of Sisyphus were mere misdemeanors compared to that of Mr. Rojas. Sisyphus had a penchant for deceit, a taste for brutality, and the hubris to believe himself more clever than the gods. Mr. Rojas discovered the New World. 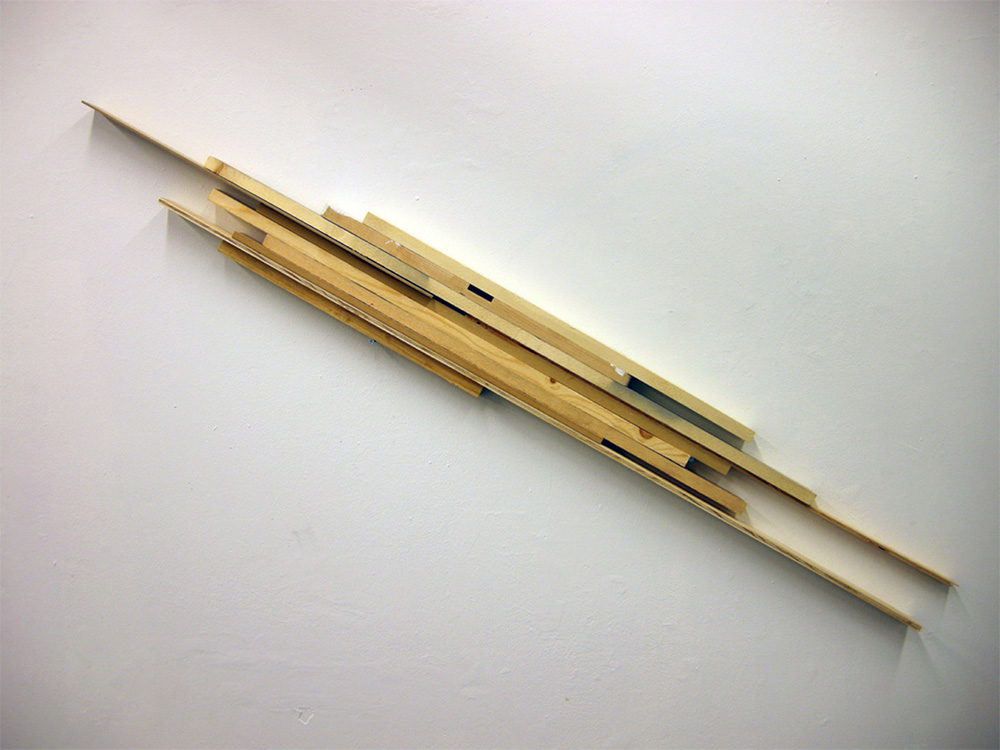 Baroque lies at the heart of more than two centuries of Mexican art and architecture, transplanted from Spain in the colonial period. And its decorative influences persist in post-colonial popular and religious art, in stubborn counterpoint to the social realism of the Muralist movement. Mr. Colin’s sparse sculpture, composed of seemingly mismatched strips of crude boards, is part of a broader series that elucidate the play of form within the baroque style. Within this simple arrangement, Mr. Colin is able to essentialize the complex interplay of texture and patterning that characterizes baroque ornamentation. 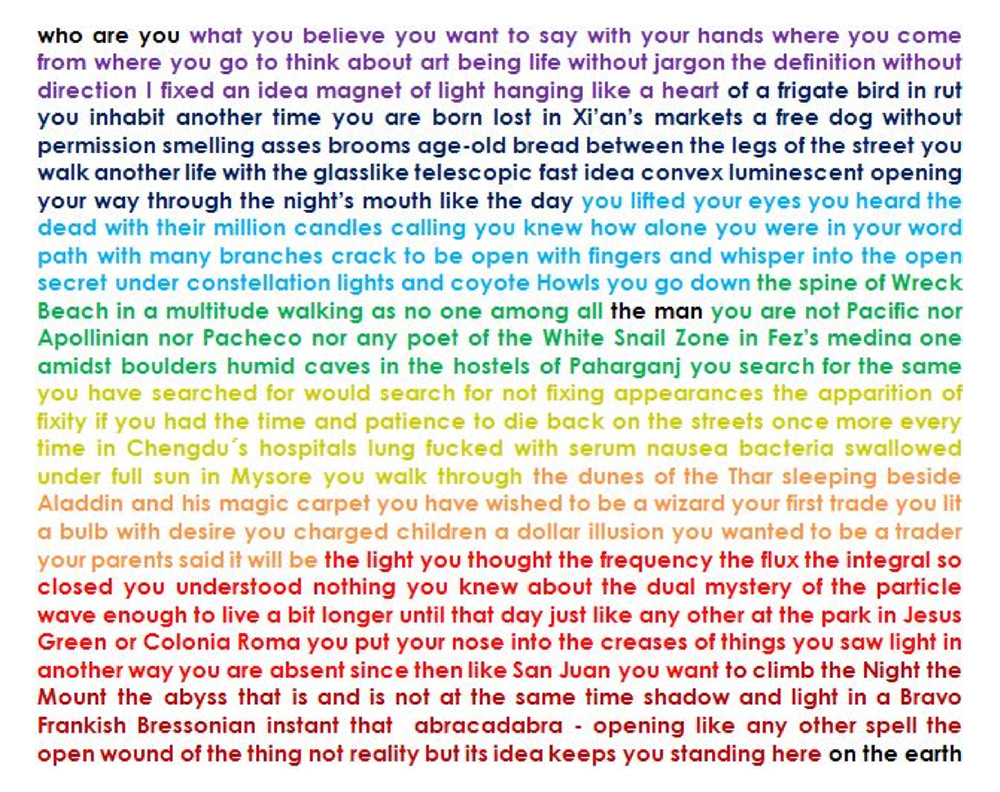 Ms. Zamorano’s stream-of-consciousness poem, rendered in Spanish and English, celebrates the exhibition’s title theme, echoing displacements and migrations, real and imagined. The anachronistic feeling of rainbow-printed text plays with the notion of moment as well as referencing a more orthodox reading of diffraction. 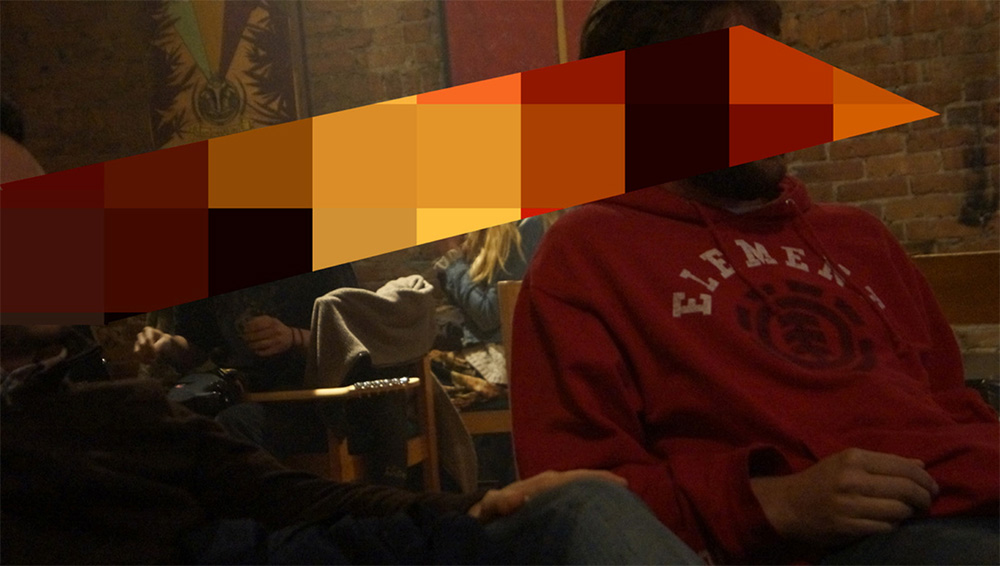 Mr. Piña takes us on a photographic journey through the urban landscape of Vancouver, mediated through the mechanical intervention of his camera. The camera’s aim is not studied, composed, or deliberate. It does not seek out and frame vignettes rich in narrative, compositional structure, or other semiotic or aesthetic quality. It merely reports. It transports the viewer into the subjectivity of the traveler, a migration of sorts. But Mr Piña puts one more twist in the experience: the setting is anonymized with the obscuring of faces and markers of place, through the overlay of geometric images. 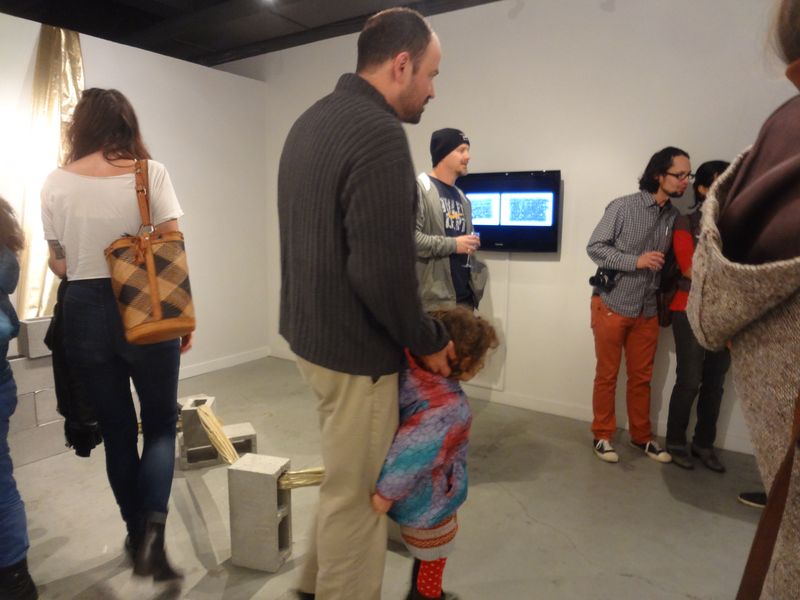 Diffractions of the Local opening night @ Back Gallery Project. Photo by Gabriela Aceves.

This first instalment of Diffractions of the Local, standing alone, is far less diffracted than the title would suggest. The seven works find many points of contact – in concept, in politics, and in form – and the show comes together with an unexpected coherence and clarity. Perhaps the commonality of Latin American roots and whatever local vibe the artists have imbibed have contributed to an underlying logic which makes this not only an exhibition of very strong pieces, but one which hangs together in an extremely satisfying way. 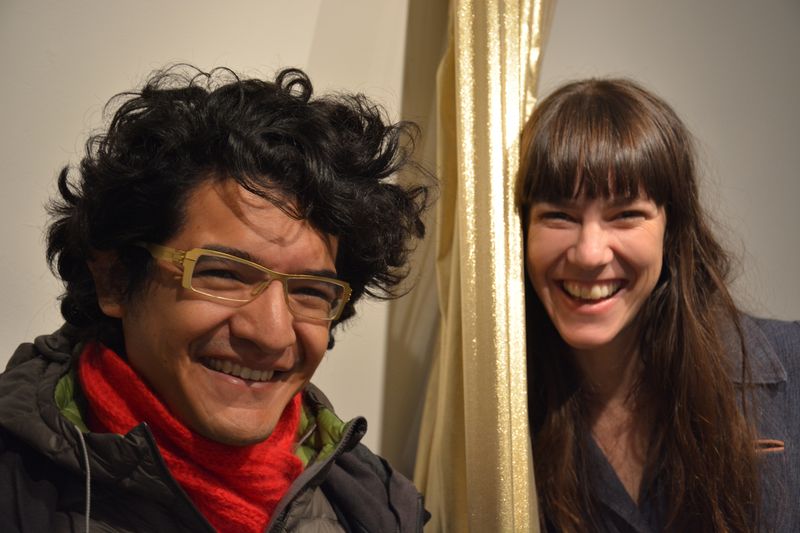 Diffractions of the Local opening night @ Back Gallery Project. Photo by Gabriela Aceves.

Finding Our Place In Time: Background / ThisPlace at Grunt Gallery