An experience of Theatre Pap’s “The Dragonfly of Chicoutimi”

I arrive to see Theatre Papʼs performance of Larry Tremblayʼs play “The Dragonfly of Chicoutimi” on the evening of January 23rd. The audience is buzzing about outside of the doors waiting for admittance to the theatre. I see many familiar faces from other line ups from other PuSH shows. Many groups in the line-up are laughing and speaking in French.

Inside the Wong Theatre, I sit a few rows back and absorb the looming set. Its presence is captivating. Inside the proscenium frame of the stage are five boxes – I would estimate each to be approximately six feet tall, five feet wide, and five feet deep. The boxes seem to hover in the space. Each box is unique; inside one, the walls are panelled with wood, and I see domestic items – a shelf, a radio, and an electrical outlet. Another is narrower and taller and seems barn-like. The furthest to my right is lined with white tiles like those of a public shower or a bathroom. Spilling onto the floor like a river is a huge blue curtain. Scattered along its banks are pieces of debris made of hundreds of popsicle sticks. Across the perimeter of the stage are five stage lights. Each points up at one of the floating boxes. I blur my eyes and let the set design flood over me. I think of train cars, stables, bathroom stalls, skylines and the false-privacy of apartment buildings. I feel as though I am floating above something, or maybe seeing a birdʼs-eye-view. Either way, it is dreamlike and the open boxes make me feel omnipotent. 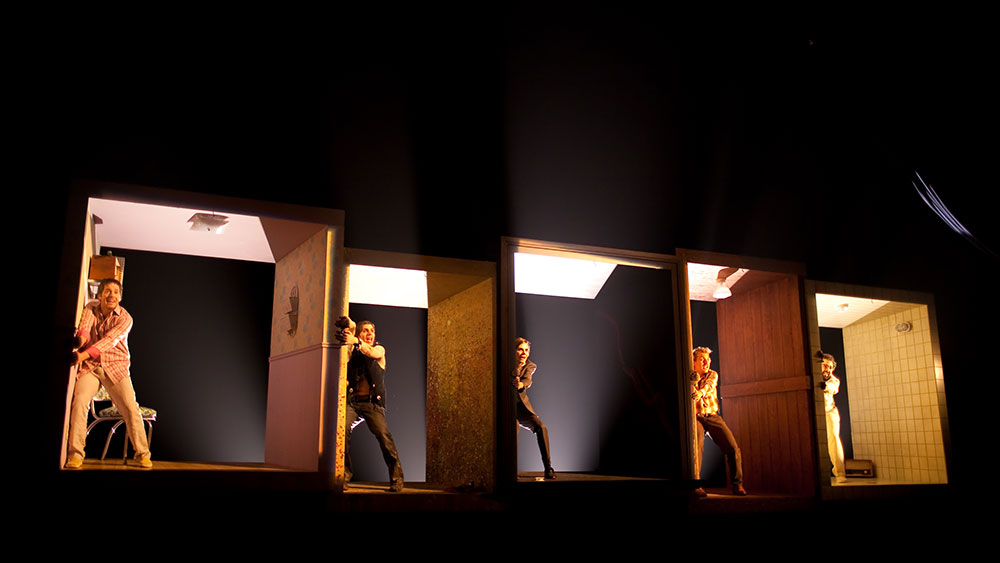 There are five actors each playing the role of Gaston Talbot – a young boy in an adult body, remembering a past he once had. Each Gaston is draped in archetype; a modern, domestic man, a mysterious leather-clad rebel, a nervous outcast (who could easily be plopped in The Cabinet of Dr. Caligari), a cowboy, and a psychiatric patient. Each framed Gaston looks like they have been painted onto the stage with richly saturated oil paints – a testament to the work of Florence Cornet, the make-up artist, as well as Erwann Bernardʼs lighting design. 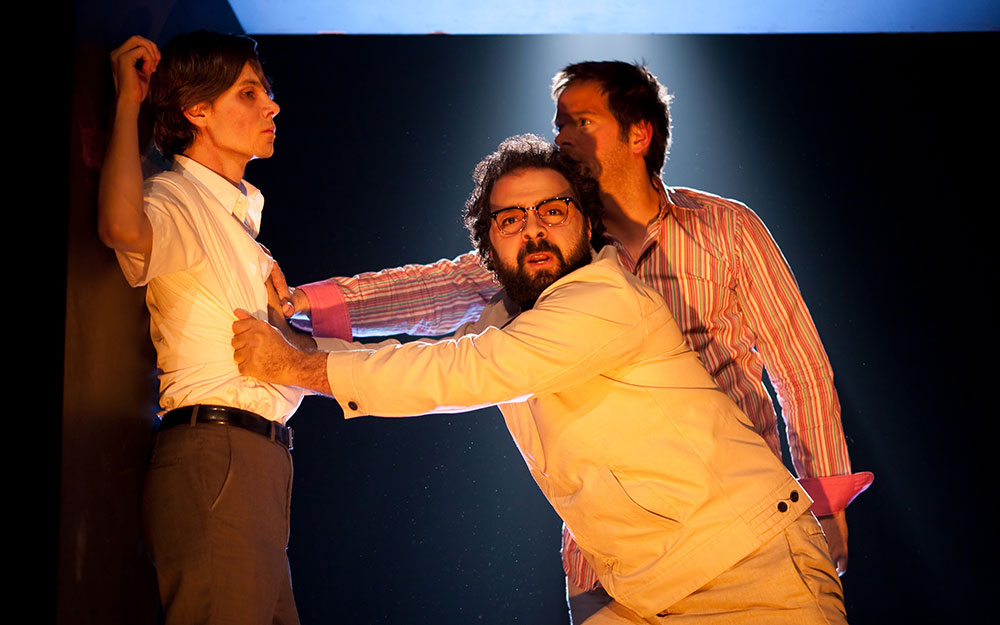 The gestures of each Gaston are particular to their unique incarnation, but the whole creates a cohesive movement-world. I find it difficult to explain the physics of the world these men live within. The closest image I can muster is to imagine that they are pushing through thick mud, or that I am seeing only every second frame of their film. The gestures are sometimes muted and minimal as if they are outlining the bones of an idea, but at other times their movements are exaggerated, and almost melodramatic in nature. Sometimes the Gastons move in perfect unison – a feat of choreography and rehearsal since each actor is performing in complete isolation from the others inside their box. (In the talk-back which followed the performance, actor Dany Boudreault described the performance experience as “acting together while completely alone.”) The total effect of the images on stage is spectacular, and I am overcome with the sensation that I know these men and these pictures; are these frames from famous paintings, or references to famous literary characters or moments of history? The dark and whimsical world thickly absorbs me as I flip through my own memory to find matches for the images they present on stage.

I digress; The Gastons are trying to tell us a story about their childhood and about their dream:

Gaston was born in Chicoutimi, a very small northern city in Quebec. A city whose name is constantly re-defined by the Gastons throughout the show. He tells us about playing “Cowboys and Indians” with his friend as a child, and about seeing this friend naked in the river. Later, Gaston has a nightmare about that afternoon in the river and we spend the duration of the play peeling away layer upon layer of lies and illusions to separate dream from reality. 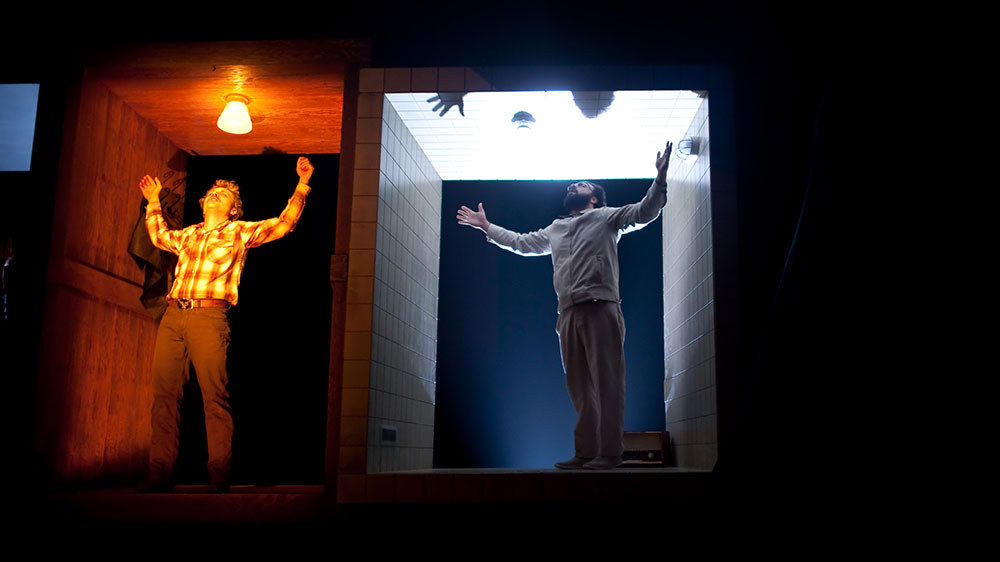 In the telling of their myth, the actors speak sometimes in unison, sometimes one-by-one, and sometimes in opposition. The chorus work is intricate. The script is written in English but uses French syntax, and the effect of this choice adds to the feeling that this world is aslant of our own. Because of the juxtaposition of English words with French grammar the dialogue manages to become poetic while still retaining a casual cadence.

Requiring special mention is the use of sound in this show. Credited for music is Eric Forget. The soundscape he created feels kinetic. I laugh when a heightened crescendo cuts itself off with the neighing of a horse. The sound design is playful and eerie – mirroring the actions within the story itself. Sounds weave in and out as if they are bubbling up from the depths of the river, and soundbites (such as the neighing of the horse) become meaningful as the story unravels. Many times the music feels dense and nostalgic only to quickly evolve into something else. The music seems oddly familiar, like so many other aspects of this show, but I can never quite grasp the memory attached to it.

The play ends with a startling image: one actor alone on stage holding a life-sized human skeleton made entirely of popsicle sticks. He cracks the sticks, and I hear the crunching of bones.

We are left to make our own decisions. Has Gaston Talbotʼs truth finally been told, or is this image simply another fabrication? Have we been left in a dream, or in a reality? Does it matter?

Larry Tremblay’s theatrical monologue was written during the French referendum in 1995. Theatre Pap’s division of the monologue into five separate voices made me think of the often ambiguous relationships between community, history, and personal identity. The talk-back discussion (which glided back and forth between French and English) brought up questions of how physical geographies affect one’s perspective of their world and their self, and the difficulties of trying to conglomerate dense layers of cultural experiences into one title of identity: “Quebecois,” or “Vancouverite.” Judging by the response of the audience during the talk-back, this French monologue written in English performed by five speakers resonates deeply with our own community still.

Welcome to the Johnny Horton Remix