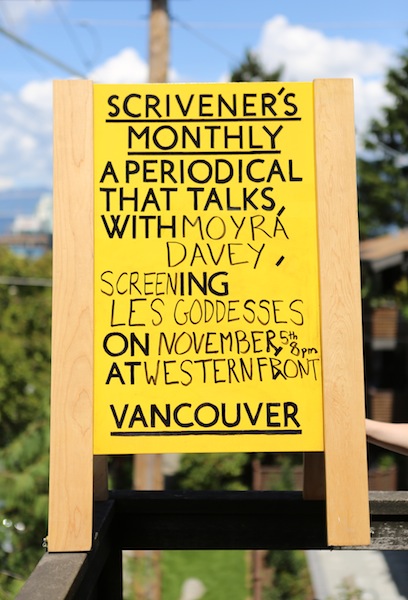 Moyra Davey’s 2011 film, Les Goddesses, played at the Western Front to a remarkably full house, which was also treated to a brief, but only minutely-illuminating conversation between Vancouver photographer Marian Penner Bancroft and the artist, following the screening. From the chatter in the intermission between the film and the talk, from the earnest-but-tentative demi-questions advanced by Ms. Bancroft, from the overheard comments of those leaving the theatre, and from discussions afterward, it wasn’t clear that anyone knew exactly what to make of what they had seen.

Les Goddesses is a complicated piece of autobiography. Ms. Davey’s motivation for the piece, she told us in a brief introduction, was to reveal a painful time in her “teens and twenties,” and yet her life features only rarely and obliquely in the formal narrative.

The entire, elaborate exercise is an excruciatingly self-referential, yet studiously covert piece of memoir-making. It leans heavily on intertwined analogical or allegorical biographical narratives – of her siblings, the 18th Century proto-feminist philosopher and literary figure Mary Wollstonecraft, and Ms. Wollstonecraft’s daughters (Mary Shelley, Fanny Imlay, and Claire Clairmont – collectively nicknamed “les goddesses” by Aaron Burr) – to suggest the spaces and circumstances in which Ms. Davey’s life might reside. The biographical detail is explicit, detailed, and nuanced; but the autobiography is intimated, elliptical, and hazy. If there is any substance at all to the place Ms. Davey’s story occupies within its own retelling, it seems largely as a gesture to George Orwell, who famously observed, “An autobiography is only to be trusted when it reveals something disgraceful. A man who gives a good account of himself is probably lying, since any life when viewed from the inside is simply a series of defeats.” A credible autobiography, then, must be a “pathography,” as Ms. Davey melodramatically calls her work.

This is a fundamentally literary film. The imagery consists largely of scenes shot within Ms. Davey’s New York City apartment, in which she is reciting the voice-over. She paces back-and-forth, as often out of view as in it, listening to the prerecorded text in headphones and speaking it back simultaneously, much as a United Nations translator might do. The resulting oratory is oddly monotonous, with elocutionary emphasis just slightly off, since Ms. Davey has only half-an-ear on herself and the other half-an-ear on the recording. This has the effect of emphasizing that these words, while spoken, come from and stand-in-place-of written text. It also underscores that Les Goddesses is a work of memoir, since we are ever-aware that Ms. Davey is in the process of offering her story, even if our understanding of the story itself is somewhat obscured by the convoluted, metaphorical manner of its telling.

The literary quality of the presentation is also accentuated by the frequent interjection of erudite, bookish citations, typically bearing on the form and rhetorical strategies Ms. Davey’s presentation has chosen. And then, literary figures like Johann Wolfgang von Goethe, Ms. Wollstonecraft, Ms. Shelley, Percy Bysshe Shelley, and Lord Byron figure regularly in the storytelling.

When static, minutes-long views of (or from) Ms. Davey’s apartment are not dominating the screen, we see black & white photographs of her sisters. These sometimes androgynized, sometimes sexualized portraits – which were originally exhibited in Ms. Davey’s early 1980s series entitled “A Catholic Girlhood” – are used liberally. They are used to visually represent both the actual women depicted as well as the Wollstonecraft women. The portraiture was originally intended to present “a transgressive femininity,” although Ms. Davey later admitted that she had insufficient “critical distance from the work” and later “pulled back from it.” Either way, the re-purposing of these still photographs richly, if ironically, contributes to literary quality of the film. If we have little hesitation in labeling the work of certain poets and writers as “painterly,” then we might just as easily describe Ms. Davey’s photographic style “writerly.” The images are pregnant with layers of narrative and exposition, well beyond the voice-over text that accompanies them in the film.

Ms. Davey approaches her sisters’ stories with subjective intimacy and adopts a dispassionate, scholarly style to chronicle the lives and exploits of famous figures long-dead. The difference is hardly noticeable, however, as the words flow incessantly through the hour-long presentation. The viewer is awash in biographical details for the cast characters drifting in-and-out of the narrative. Amid so much detail, our sense of Ms. Davey’s sisters and of the historical figures is largely impressionistic. And, in the end, the specifics of neither thread of the yarn really matters much. The lives of these others merely define the negative space in which Ms. Davey’s pathography might or might-not be found.

Scrivener’s Monthly is a series of public presentations that explore the space between material practices and spoken words: a periodical that talks. Set alongside the exhibitions program at Western Front, this experiment in “not publishing” involves readings, performances, and other articulations.

This Scrivener’s Monthly talk was part of a larger exhibition of Davey’s work, called Ornament and Reproach, being shown at Satellite Gallery November 8, 2013 – January 18, 2014
satellitegallery.ca 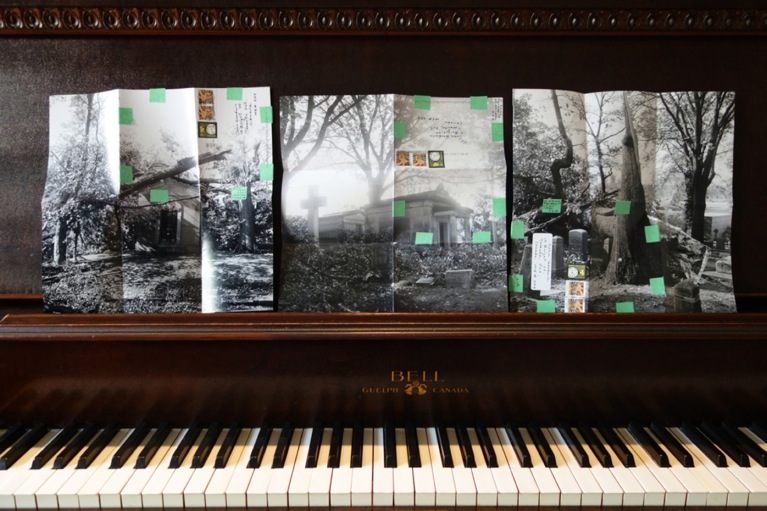 Moyra Davey, Ornament and Reproach, 2012-13; 3 mailers from a collection of 26 mailers, each unique, B&W and colour, postage, tape, various sizes 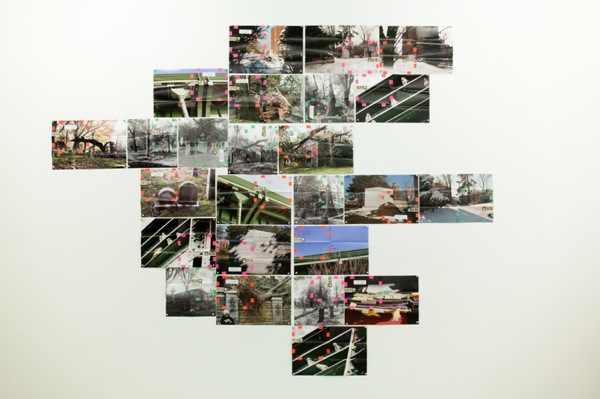 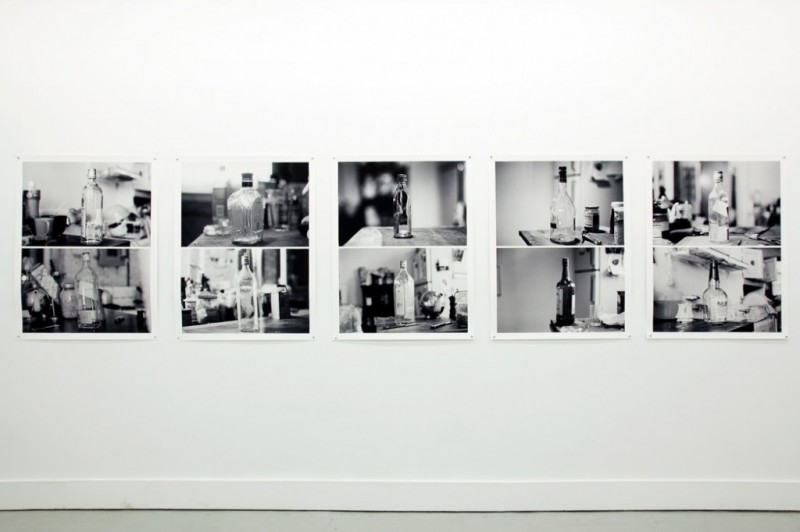 One Response to An Autobiography Carved from Biography