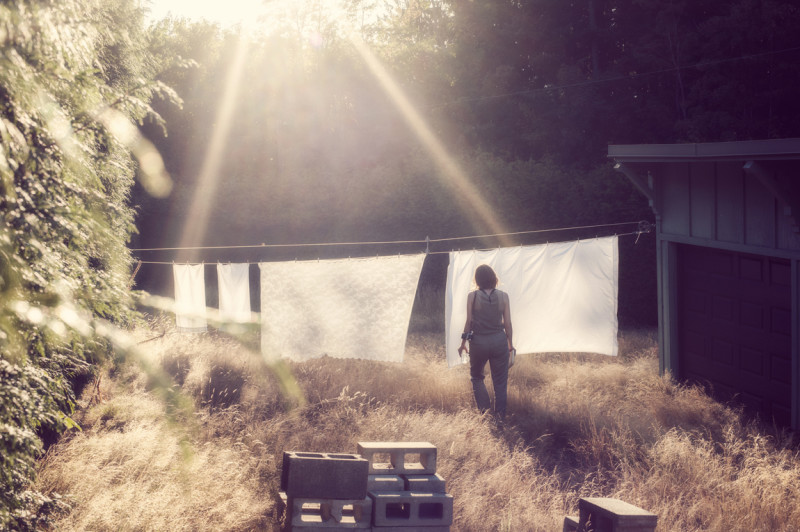 At the end of a very long drive and an even longer bike ride into Point Grey, is a boarded up house insulated by a tall fence and scrubs. Cedar siding lifts off the structure from seasons of wear, casting vertical serpentine shadows interrupted by pieces of artwork clinging to its sides. The only street-side gallery markers — or gallery façade, as it becomes — is a crisp white sandwich board next to a white table, on which four cheap water bottles warm in direct sunlight. It marks the entrance to a property that is spooky, an odd triangular plot caught between neglect-induced urban decay and reclamation by nature and rebirth. 4855 Fannin Avenue on this particular day looks effortlessly cinematic. Strangers circumambulate the house through golden grasses, combing with their fingers as they walk. Unlike most gallery openings where people are generally spending more time in conversation than in contemplation, this opening demands an unnatural level of focus and participation. Attendees savour every minute on the property as though it could be their last, waiting for their trespass to be exposed by a confused and angry neighbour who threatens to call the police. 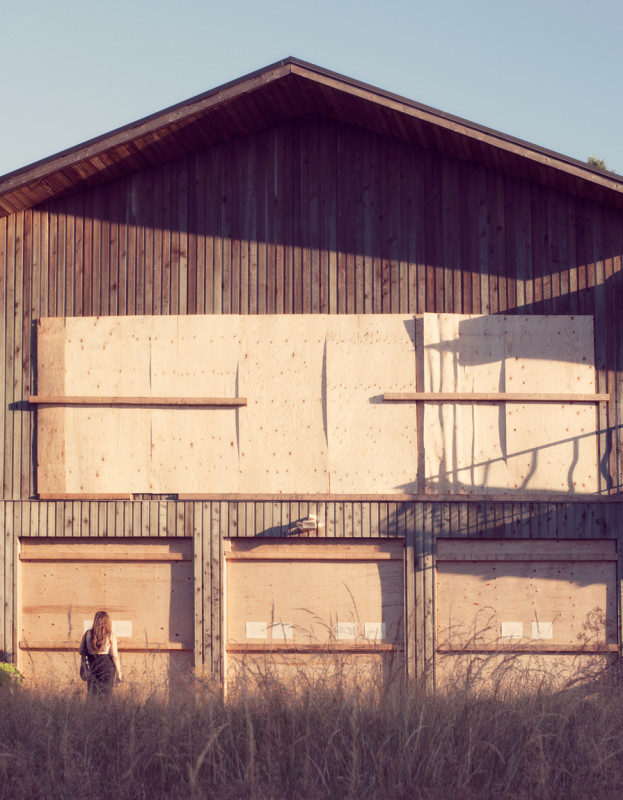 I heard about Ground Gallery from a friend in Vandocument who conveyed it as best he could with what little information was provided. Ground is a new type of gallery, one that subverts the trendiness of Chinatown studios and the sterility of commercial spaces by illegally migrating between vacant lots across Vancouver. The first group exhibition, In Passing was initially described in a cryptic press release as “a reflection on impermanence and precarity, set within one of Vancouver’s many unoccupied residential properties.” Even after the initial appeal of mischief had worn off, the possibilities surrounding Ground Gallery had a seducing effect. I prepared for this writing assignment as if preparing for a date. One week before the exhibition, the curators C + C sent the address in an email. 4855 Fannin Avenue, an overgrown and abandoned property in a Stepford neighbourhood of manicured lawns and alarmed gates. Absolute perfection. 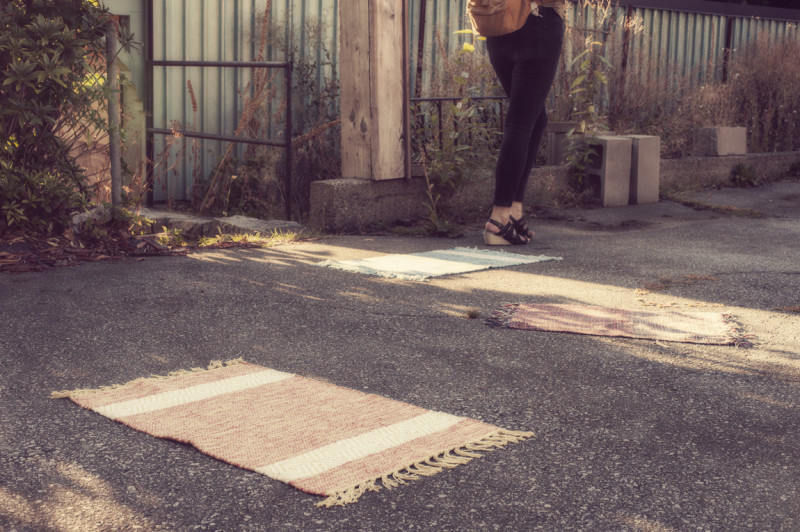 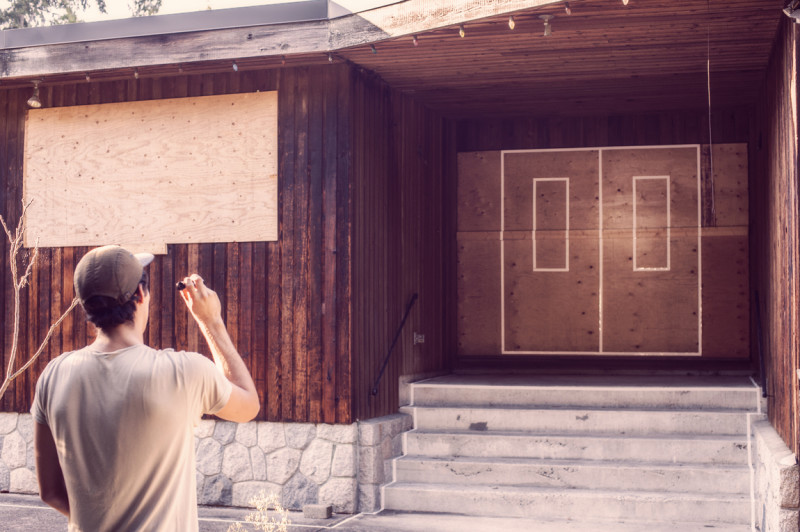 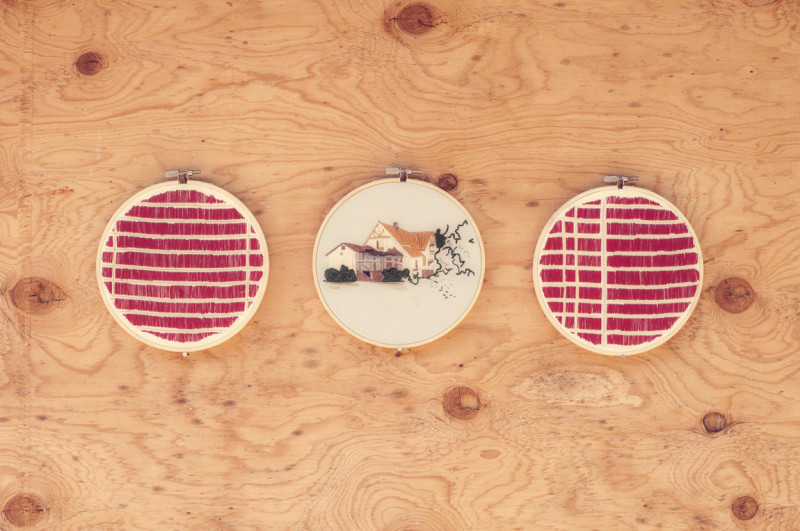 The artworks were scattered around the property, some more obvious than others. We Could Live Here (2015) was initially more aural than visual. Two large pieces of fabric stretched across vents seemed to give the house breath as the wind passes through them. Forever (2015) was a series of carefully drafted architectural drawings paired with small works of fiction nailed to the sides of the building, manufacturing unlikely schematics of the interior of the house alongside imposed narratives. I love it here (2015) outlined the main entrance in reflective tape. The viewers were encouraged to shine a flashlight at the tape, which gave the illusion of a virtual space lit up. A set of embroideries titled Hearth and Mantle (2015) were the most traditional works, hung at what appeared to be gallery height along the side of a shed adjacent to the house. Finally, almost entirely concealed physically and conceptually was To whom it may concern (2015), a one-sided correspondence of several letters accumulating in the mail box. 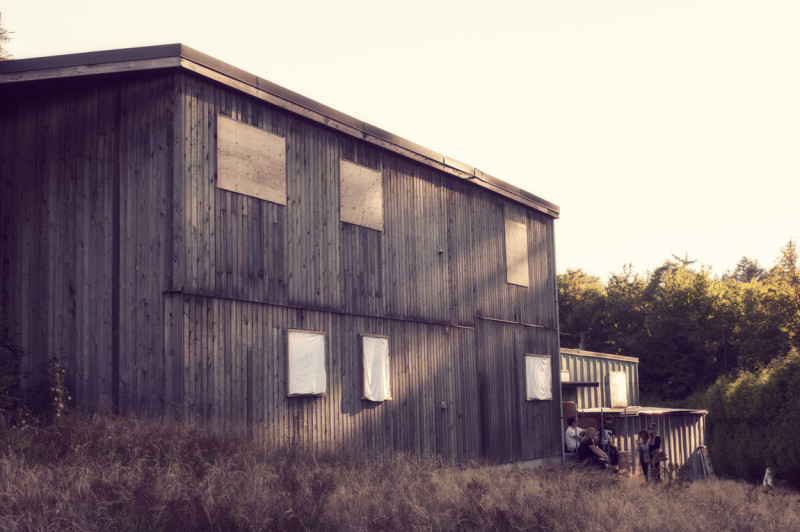 Talking in Circles (2015) was the final piece of In Passing, a two-part sculptural and discussion-based installation hidden in plain sight as misplaced logs and stumps. While 4855 Fannin Avenue merely alluded to a gathering place, the actual discussion portion of the work occured two weeks later at 1401 Robson St, a vacant lot surprisingly situated the middle of downtown Vancouver. The intention of holding a circle discussion after the exhibition on a separate site was to provide curators, artists and participants the chance to reflect on In Passing in a safe space. While gathering on 1401 Robson St technically is trespassing, the privately-owned property has no pending development applications and is easily mistaken for a park. Several desire lines cut directly through, connecting a bus stop to an alleyway and one apartment to another. In the corner of the property the artist J set up stumps and strips of found wood in a circle, which remained as provisional seating once we left.

We waited 30 minutes for everyone who had rsvp’d to arrive. The attendees consisted of two artists, J and L, the curators C + C, and gallery observers A, B, C and myself. The discussion was structured in the style of a non-hierarchical storytelling circle, within which everyone is given a chance to speak as long as they want before passing off to the next person. Talking in Circles concluded once everyone had spoken four times, which in our case took 3 hours. Talking in Circles was perhaps In Passing’s most moving piece, due in large part to the intimacy of sharing personal observations which, despite spanning from childhood anecdotes and insecurities to larger issues of land rights, all seemed to flow together to weave a sort of resolution. It acted as a cathartic conclusion to the exhibition, which ended abruptly at 4855 Fannin Ave—

I stand near the entrance with one of the curators C when a tall and sturdy middle-aged man with a shaved head wearing a blue polo yells over to us, “Are you supposed to be here?” followed by, “Do you know the owner?” C answers no to both these questions, retaining a too-cool composure that while impressive, does little to settle my pulse. Everyone within sight of the entrance turns to watch the confrontation. The neighbour, walking over from the house directly across the street spits additional accusatory questions, which C answers with simple no’s until the man says, “Well you better be moving along then because I’m calling the cops in 5 minutes.” Participants frantically gather bags, cameras and recording devices, the curators gather their gallery props, and we all leave. It is a very sudden end to a dream-like afternoon. 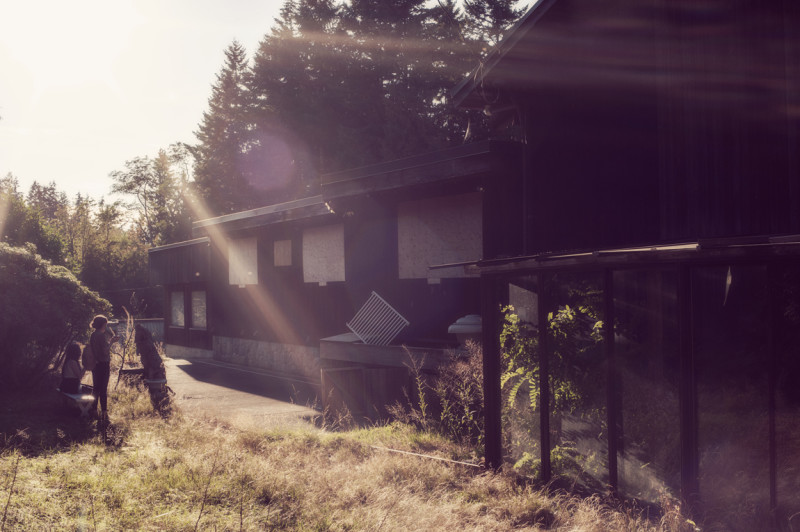 Perhaps the most lasting impression of In Passing is that it didn’t seek to answer questions about land use or ownership, but rather facilitated discussions surrounding them. Whereas exhibitions that comment on gentrification or land claims may have a tendency towards authoritative generalizations, In Passing was surprisingly subtle and non-judgemental. The gallery space itself acted as an intervention, and the pieces displayed and circle discussion that followed were responses to the intervention. 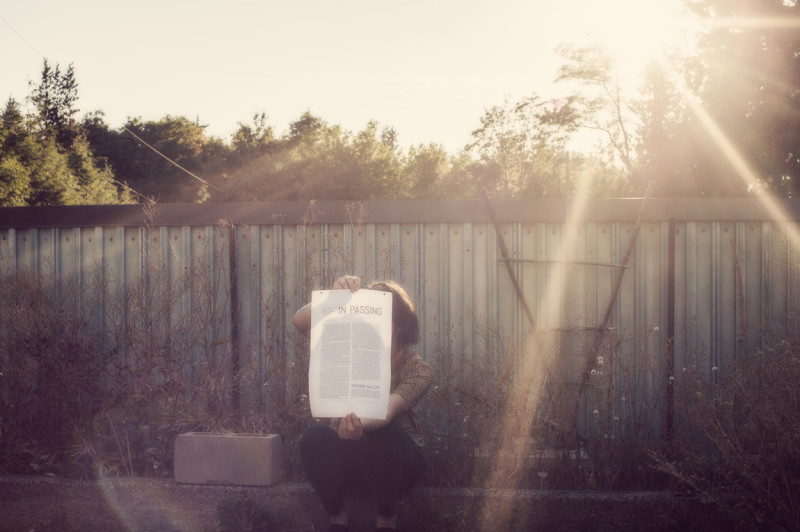 “premises” means land, including enclosed land, foreshore and land covered by water, and anything on the land including

(a) a building or other permanent structure,

(b) a ship or vessel, train, railway car or vehicle, except while in operation,

(c) a trailer or a portable structure designed for used as a residence, for shelter or to house a business, and

“vehicle” has the same meaning as in the Motor Vehicle Act.

4.1 A person may not be convicted of an offence under section 4 in relation to premises if the person’s action or inaction, as applicable to the offence, was with

(a) the consent of an occupier of the premises or an authorized person,

(b) other lawful authority, or 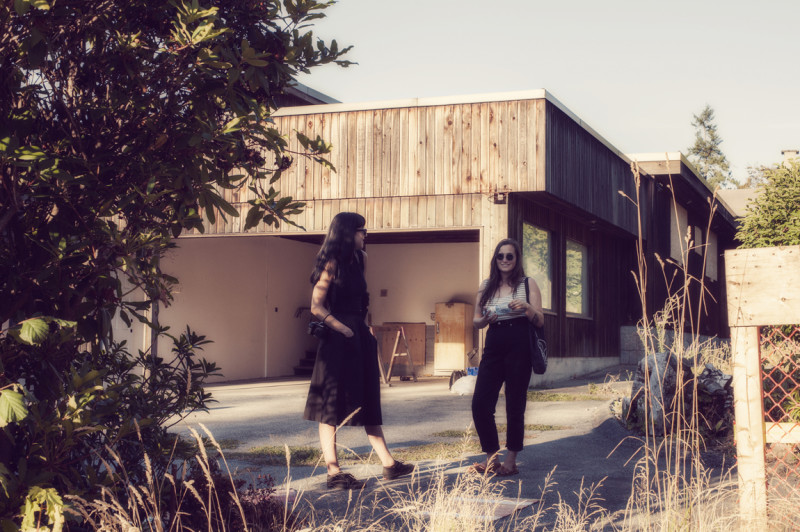 Ground is an artist-run gallery that endeavours to explore possibilities that are opened up through a consideration of artworks outside of the traditional exhibition paradigm. Opting for multiple provisional sites in lieu of a permanent gallery space, Ground coordinates exhibitions, performances, installations, talks, and other related events in unorthodox locations. 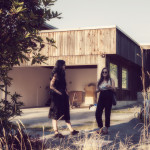 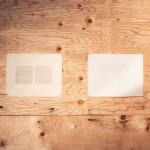 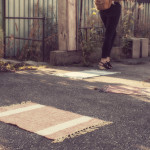 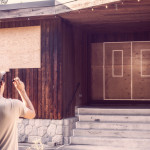 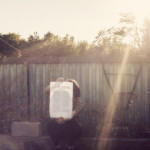 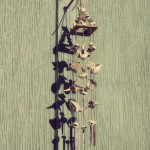 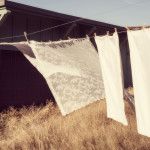 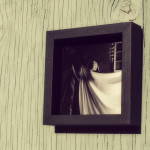 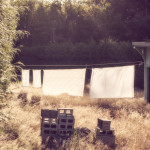 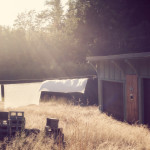 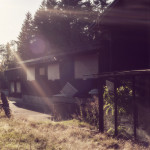 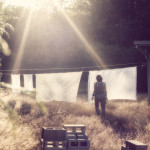 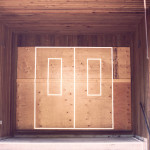 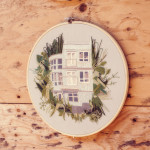 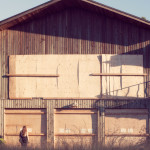 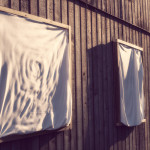 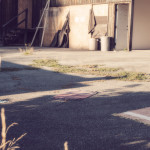 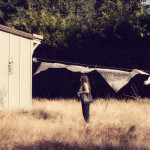 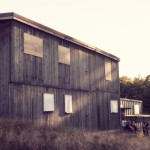 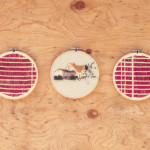 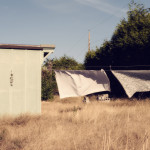 One Response to ‘Colour of Right’