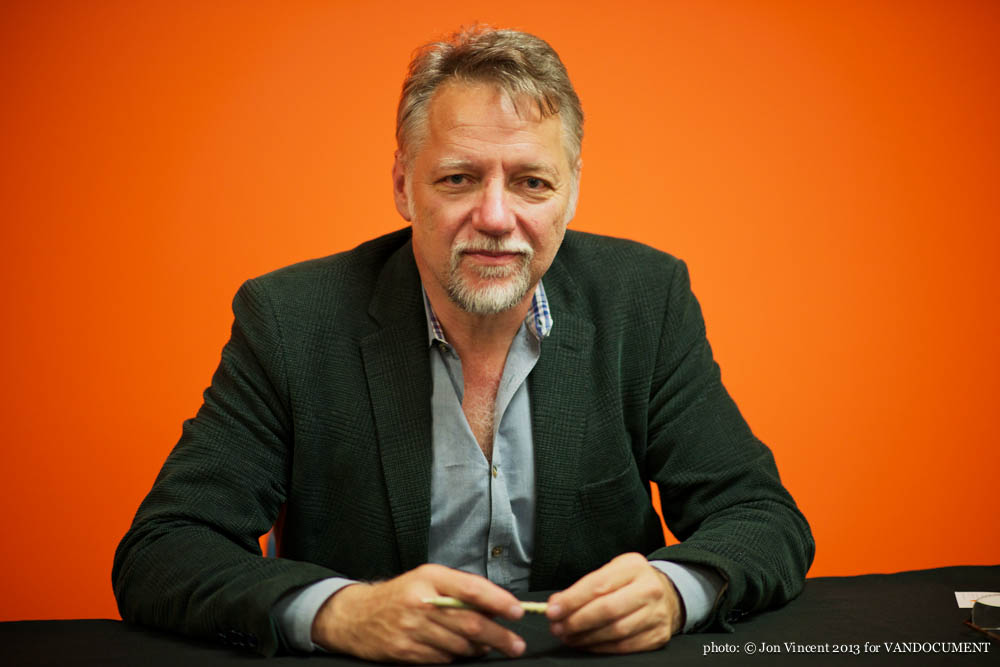 Edward Burtynsky. Even if you don’t know his name, you most likely know his photographs. In the last decade he has become a household name and a go-to for the coffee table book collection. As part of Capture Photo Festival’s inaugural, and deceptively heavyweight line-up, Burtynsky spoke at Langara College about his new project, Watermark.

The exhibition, Water, had debuted in early September in New Orleans, and the accompanying documentary, Watermark, directed by Jennifer Baichwal, was first screened at the Toronto International Film Festival, also in September, and received its second screening at the Vancouver International Film Festival two days after Burtynsky’s talk at Langara, prior to it’s general release. So this was quite a coup for both Capture and for Langara’s Continuing Studies department, which maintains it’s high standard of guest speakers. 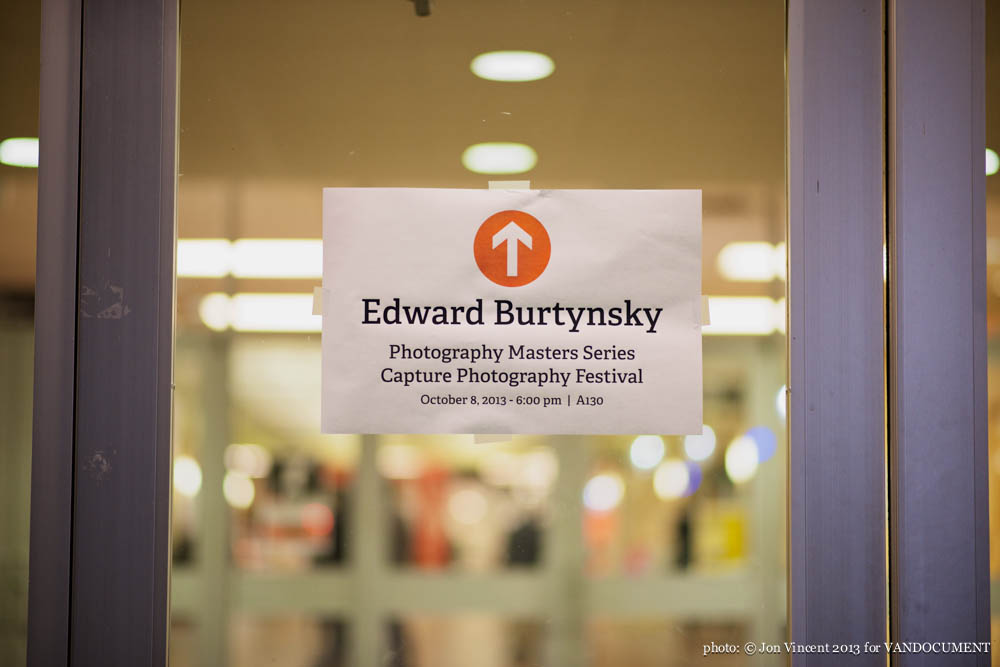 The event was sold out, and those in attendance were treated to an engaging and enlightening talk by Burtynsky. He covered his early inspirations and work briefly but concisely, describing how he found his visual aesthetic in large format colour image making, an interest in abstract expressionism, and a strong belief in chasing the concept of the sublime through the camera lens.

He discussed his breakthrough series Railcuts, explaining his inspiration as imagining an engineered line, an iron ribbon, stretched across Canada. 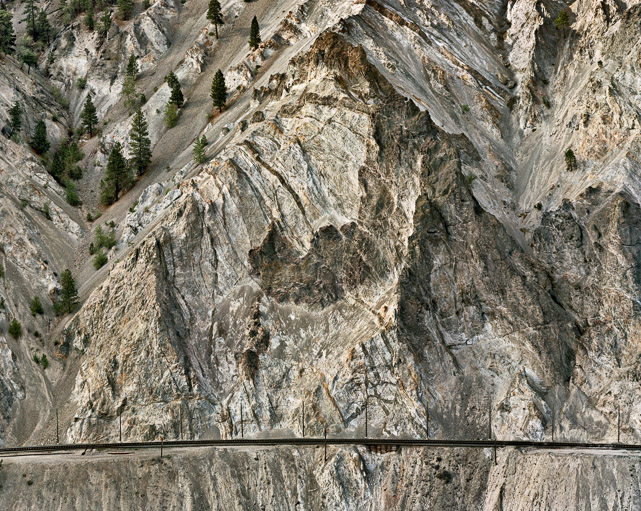 I found this a deeply poetic vision of a serious feat of engineering, and the moment when I realized the depth of thought and consideration in Burtynsky’s work. It is easy to see a stunning visual or read an environmental message in his images, but there is also a deeply involved and affecting vision in his work, stemming from a respect and adoration of the places he sees and an intense understanding of the history and construction of a photograph and its meanings and implications. He is an artist at the height of powers: confident, succinct and lucid, and throughout the talk, it showed.

Burtynsky touched on Manufactured Landscapes, the 2006 documentary again directed by Baichwal, which exponentially grew public awareness of his work.

He showed images from other series such as Mines, Quarries, Tailings, ShipBreaking, and China. He offered his thoughts on the conception of his ideas. Significantly, Burtynsky explained how each project grew from what he learnt during its undertaking, and how each project often helped inform work further down the line. He explained how these projects stemmed from thought processes into visual imaginings, a great example being Quarries, which came from imagining the image of a skyscraper reaching up being reversed down into the ground.

Then Burtynsky launched into his new work, discussing its inception, its evolution, and its gradual creation over several years, including a significant shift in his use of technology. I had been aware that he previously worked on large format film cameras. But now he is using digital cameras to make his images, due to their flexibility and adaptability. He explained how many of the images in Watermark would have been impossible without digital technology: the speed and precise nature of the work, as well as the ability to digitally ‘stitch’ compositions together was previously impossible whilst maintaining the scale and grandeur he is renowned for. 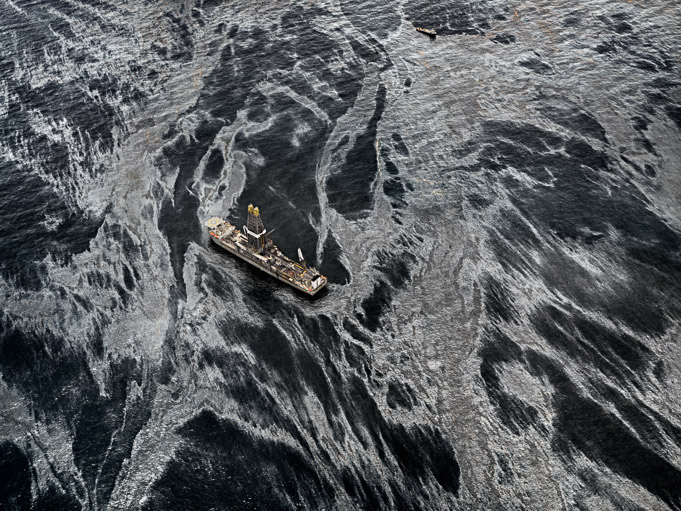 Prints of the new work are reaching 6’ x 4’, which is intended to create an immersive experience for the viewer. The other significant point was Burtynsky’s description of trying to release the camera, and so his vision, from gravity. By using technology, he has removed his vision solely from the human perspective and into a more neutral viewpoint to show the places he visited and the effects humans are having on them.

The strangest part of the night was at the end when he played a short video showing how some of the images were made. It reminded me of BBC wildlife documentaries and the end-of-programme mini-documentaries in which they explain how the filmmakers captured unique images. It did feel a little unnecessary and a little like the magician showing you the trick behind the magic, but it was also great to see the working side of the project, not just the finished series.

Ultimately, Burtynsky’s works are beautiful and visually captivating, although they show some truly terrible things. He offered thought-provoking considerations: that nature had been an omniscient presence in our world, but insisting that now humans are an omniscient presence in nature, dwarfed by our own creations. His one moment of serious political rhetoric came when he stated that,

“The greatest thing we as humans produce is waste”

suggesting that our creations are like Frankenstein’s monster; that we can never completely comprehend what can go wrong until it has gone wrong, such as the recent Deepwater Horizon catastrophe in the Gulf of Mexico.

Yet he presents his work calmly, elegantly even, acting as a passive documentarist, showing us the visual facts so we can make our own decisions. Within his passivity there is power, which was further enforced upon seeing Watermark and hearing him and Baichwal speak during the VIFF screening. To objectively show people what is happening, and to let them make their own minds up, is often more powerful than dictating to people what is right and wrong. Indeed one of the first things Burtynsky made a point of explaining in his talk was a desire to “stimulate a process of thinking.”

I spoke to a few people after the talk; they were impressed by Burtynsky, finding the evening engaging, entertaining and affecting. Kim Spencer-Nairn, Executive Director of Capture, was enthusiastic, describing the evening as a “great success,” saying she “couldn’t be happier,” as a considerable line-up formed to buy copies of Water and get them signed by its creator. 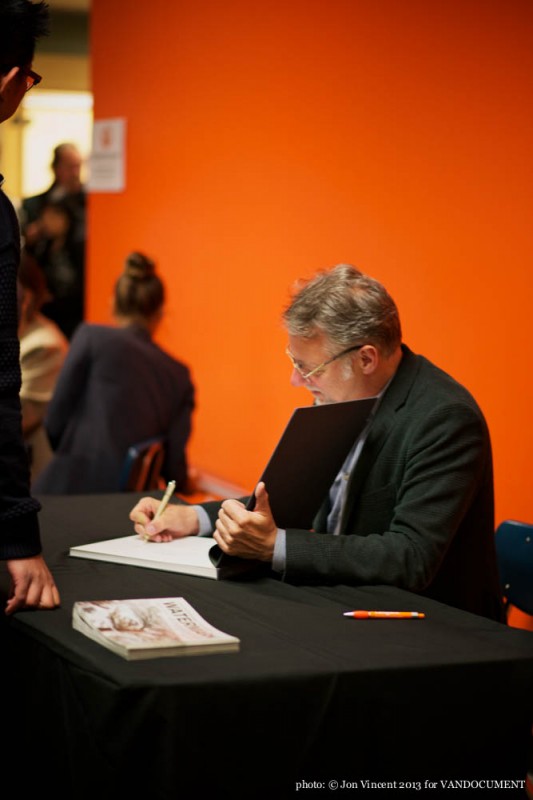 Given the buzz around Capture in it’s first year, and to pull a household name in like Burtynsky, I’m left with hope that the festival will grow, evolve, and significantly, will be around for many years to come.

You can catch Burtynsky’s work on five billboards around Vancouver as part of the Capture Photography Festival.

Capture is on until November 15 2013.
capturephotofest.com 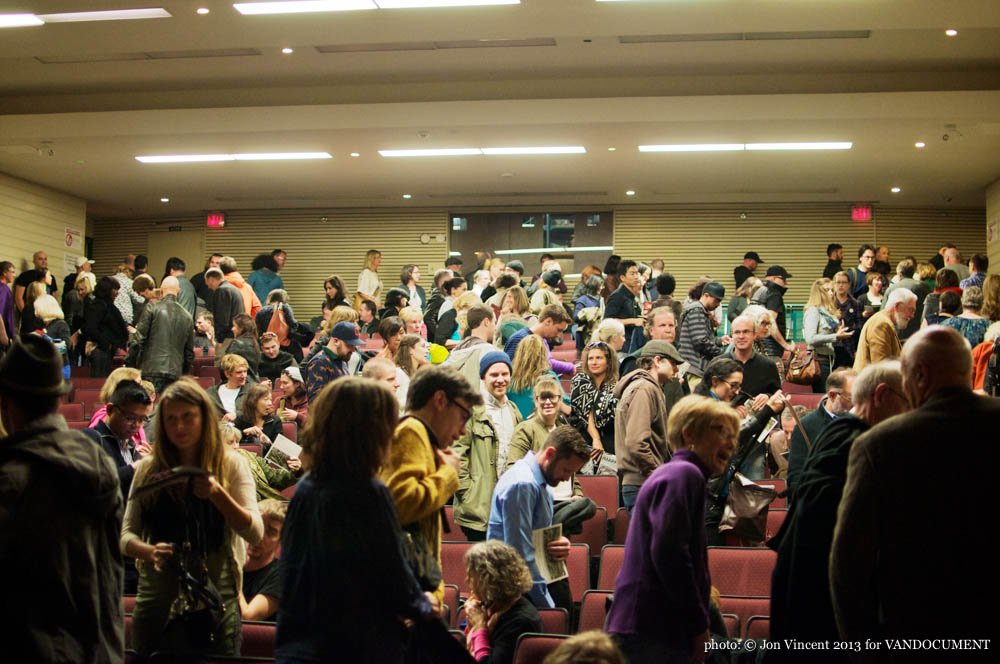 Bringing you the best in Vancouver’s local emerging arts and creative events since 2013
Contact us: sayhi@vandocument.com // 778.881.8932 // 721 E Hastings Vancouver BC V6A 1R8 Powered by WordPress - Designed by Gabfire Themes