“When Two Worlds Collide, Anything Can Happen…”
– Doctor Who, Series 3

On Friday night I hid from the falling sky at Granville Island‘s Performance Works and witnessed the 20th incarnation of Brief Encounters. This brilliant endeavour regularly brings together artists of diverse contrastive backgrounds, throws them into a creative centrifuge, and after two weeks, something amazing/unique is inevitably spit out.

Full from Tony’s Fish and Chips and fuzzy from after-work beers, I watched the line snake out into the deluge and smugly congratulated myself on being unfashionably early. As we entered the venue, the bassy jazz of VJ/DJ Electrabelle encouraged everyone to feel even more hip and edgy than they already seemed to be. 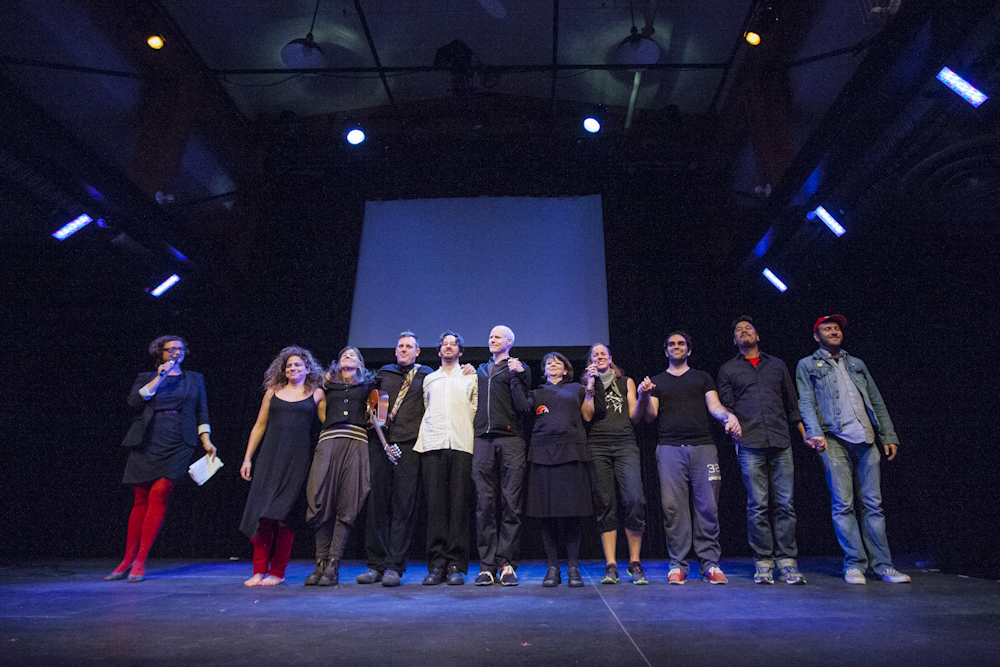 The droll and lively Riel Hahn MC’d the performances, pointing out that Brief Encounters 20 is pairing with Fringe Festival for the first time, and having its own boundary-breaking collaboration. In this case, half of the artists were Canadian and half were international. Each duet chose a different point of relation to build their fifteen-minute collaboration upon.

The show kicked off after an introduction by filmmaker and electronic-Rennaisance man, Flick Harrison, who worked as Guest Programmer with David Jordan.

Sato and Booey married their passions perfectly, with humour to boot. Badass ladies in Adidas jackets danced in an alley, through a gauntlet of tech/video/software jokes and witty visual puns – Hilarious to anyone who lives in the technosphere of Vancouver 2013. The video was sourced from INTERSECTIONS, a project of Cineworks Independent Filmmakers’ Society, which works on the same interdisciplinary principle as Brief Encounters. 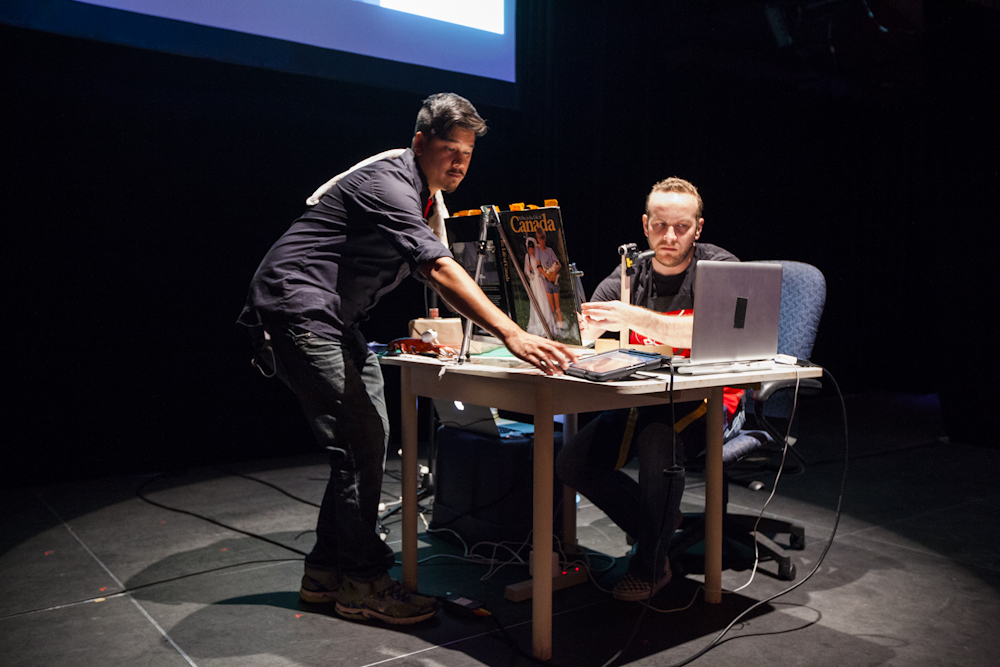 Brendan Tang, traveling artist and ceramist, teamed up with Zeb L. West, Texan puppeteer, to create a multi-dimensional performance. Through live video feed to a screen above them on the stage, the two explore the book “A Day in the Life of Canada” with physicalized comedy. With movement, focus and zoom through chosen photos of Canada’s visual history, the cheesy 70’s coffee table book became an effectively endearing and frolicsome story/play/skit. The use of anthropomorphized items and whimsically simple props was wonderful. As they wrapped up with a fake cabin-side campfire, singing along with a ukulele, I even felt a little patriotic. 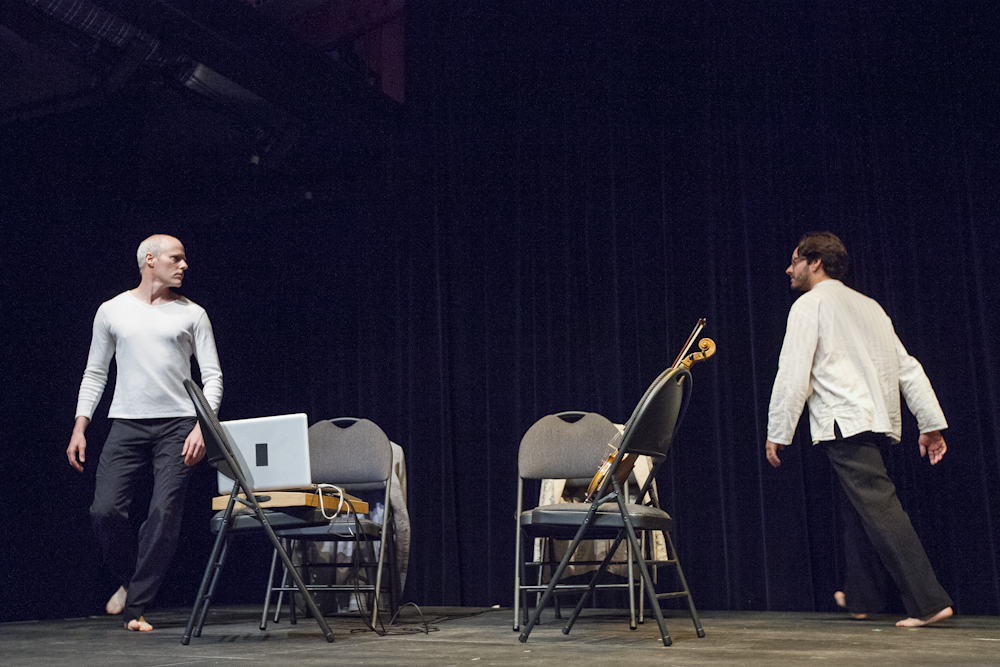 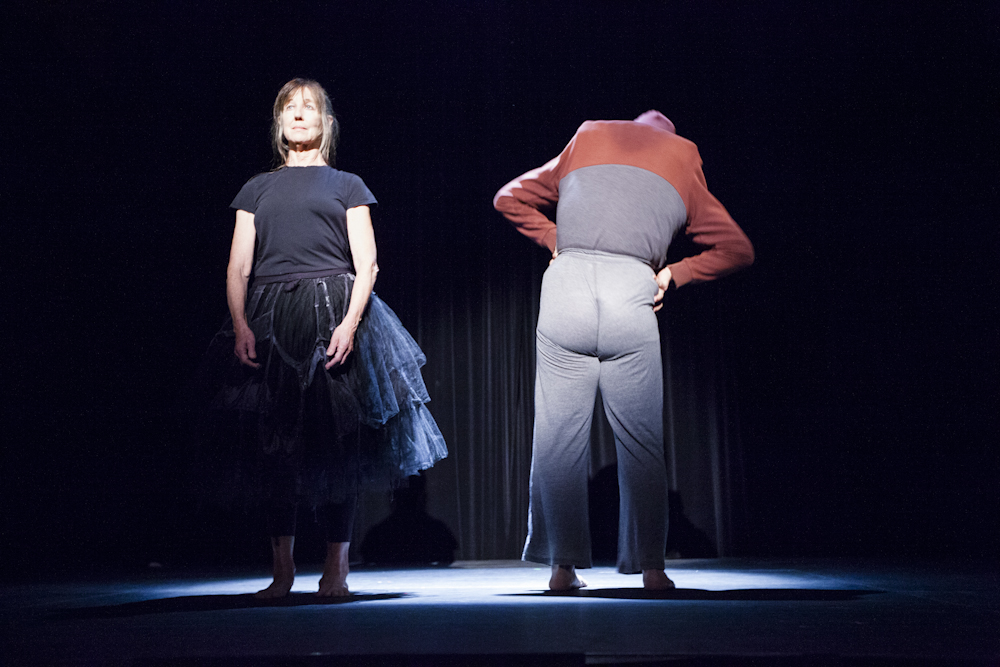 My excitement for the renowned dancer/choreographer Karen Jamieson‘s duet with unapologetic San Franciscan bouffon Nathaniel Justiniano was cuffed by bad luck. Within a minute of the promising performance, Justiniano had wailed his body to the stage and dislocated his shoulder. Riel assured us that he would recover and the calibre of their performance was confirmed by those who had attended the night before.

RedSara, Vancouver performer, cycling activist and multi-media eco-artist, was paired with punk-rocker and New Media artist Liz Solo from Newfoundland. The two Canadian women connected over the act of self-naming, though their motives seem distantly disparate. While Solo poetically recounted “realizing [she] was all alone in this universe,” Sara is “Red for the people” and lets her velo-activist-communist colours fly. An enormous balloon of recycled white plastic provided prop and background for the projection of a burning, apocalyptic scene. The dystopian future was described/suggested with Cormac McCarthian ambiguity. The women’s dialogue constituted a sort of “anarchist myth” that prodded at issues of fossil fuels, capitalism and generational disconnect. They ended with a song to Liz Solo’s epic bass-playing.

13 Orphans, by Howie Tsui and Zachary Rothman, was the second INTERSECTIONS film shown. It was visually arresting and sensually textured, but I felt the meaning was hidden too deeply. I would have appreciated a bio spot on the artists, who I later researched. Howie Tsui recently released “Horror Fables,” which according to his website, utilizes “imagery from traditional Asian ghost tales, Buddhist hell scrolls, ancient bestiaries, Hong Kong vampire films and the Sino-Japanese War to satirize the climate of fear in contemporary culture.” Zachary Rothman, of ethical bacon motion pictures, has animated the 2-D fantasy of Tsiu with an eye for beauty, composition and detail. 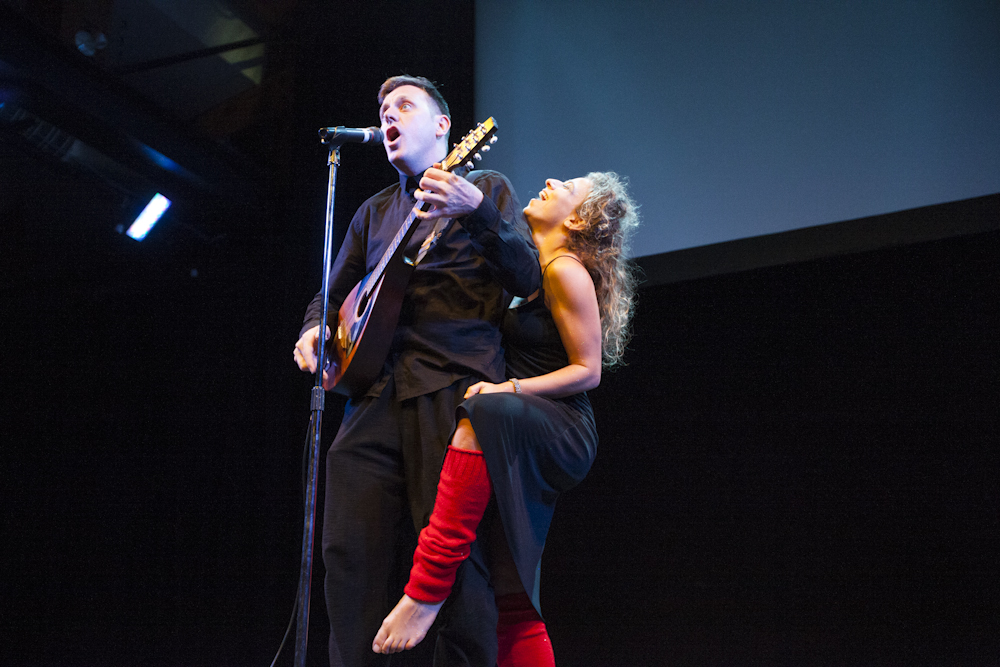 Until I realized that their piece was self-parody, I was put off by Deanna Fleysher‘s silent feigning of attraction to stand-up poet Steve Larkin, during their introduction video. His singing, “I started a joke, that started the whole world living,” proved mildly annoying while her clownish bouffon was wildly desirous. After she had ripped her dress (and duct-tape pasties) off and wrangled the front row onstage to massage the self-absorbed Steve, I truly appreciated her as a strong female performance presence.

Though I rolled my eyes at the blatant punchline of Animal Magnetismo (their second song, “I wanna have sex with dogs…”), by the time Ivy the black lab made it on stage I had to forget my criticisms and joined in the laughter. 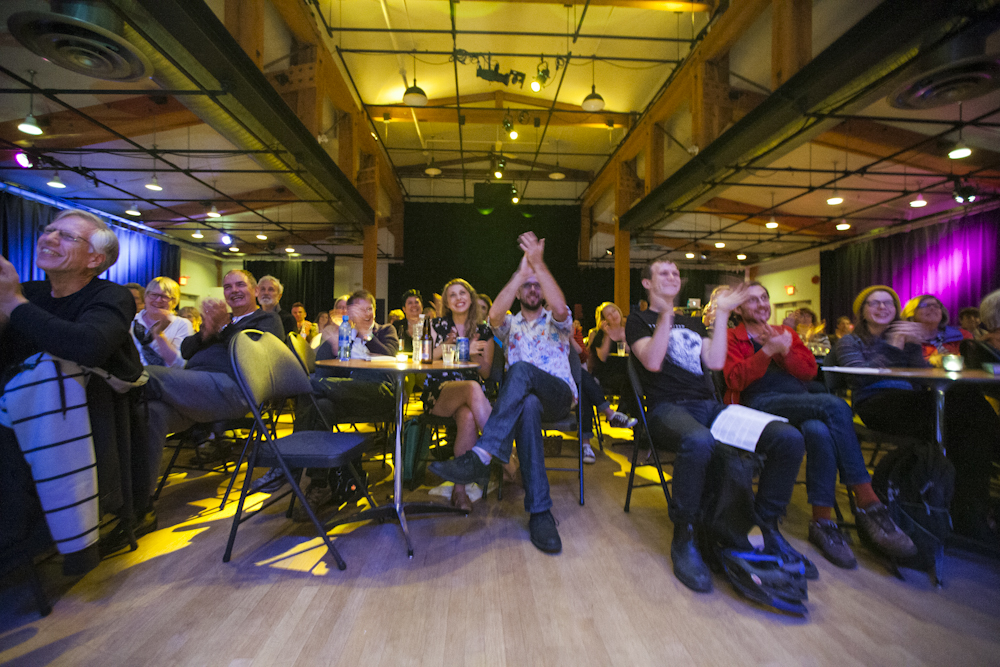 A Union of Disciplines and Minds: The Body Narratives Collective and Their Upcoming Production, Dark Room