Undertaking a production of Ubu Cocu (“Ubu Cuckolded”) is no mean feat; nor is it a conventional choice, even by the standards of deliberate transgression. The play is as incomprehensible as it is obscure. But director Nicole DesLauriers was more than game, inventing technical challenges for herself well beyond those already abounding in the nonsensical French script, which she deftly translated and adapted.

Ubu Cocu is the second of three absurdist plays written by Alfred Jarry at the Fin de siecle. All three plays centre around the bizarre and evil Ubu, “erstwhile King of Poland” and practitioner of the “science of pataphysics” – M. Jarry’s ironic coinage for the study of made-up almost-sense or, perhaps, the studied disregard of sense, which was the inspiration for Paul McCartney’s quizzical Joan of Maxwell’s Silver Hammer.

Just how recondite is Ubu Cocu? It was never staged within the playwright’s brief lifetime. The one play of the trilogy that was produced, the first, Ubu Roi (“King Ubu”), is known more for its spectacular failure than anything else. Its premiere was a scandalous, riot-producing, one-night affair. The show closed just as quickly as it had opened, after shocking and bewildering its Parisian audience with incoherence, violence, scatology and a general spirit of trying-just-a-bit-too-hard irreverence. Ubu Cocu and the concluding play, Ubu Enchaíné (“Ubu in Chains”), went more than a decade after being written without a single performance.

So why did Ms. DesLauriers and her assistant director, Pedro Chamale, decide to take-on this peculiar play? “I’d read all three plays,” she said, “and I think this one is clearly the best of them. It incorporates all the major themes of the other two, but it is half as long and way more fun.” She is right about the fun, although how much of that can be properly attributed to M. Jarry seems debatable. She and her team should have no qualms taking full credit. 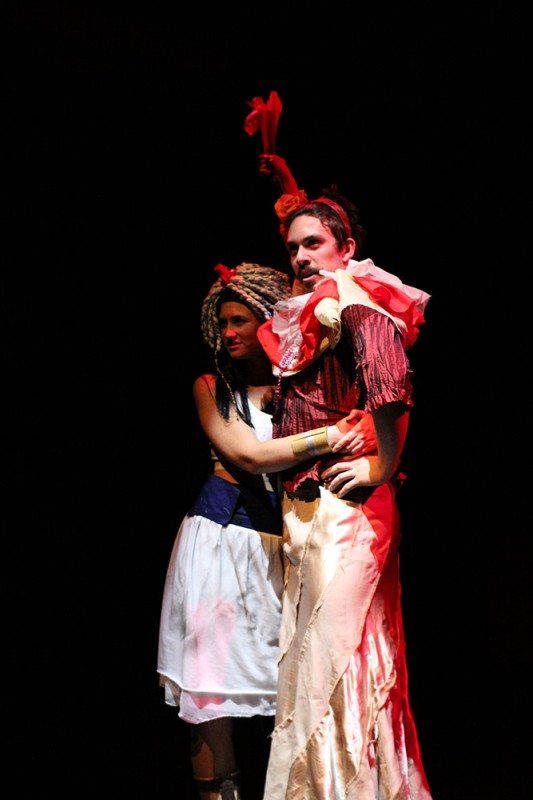 The play itself is free-play. In curtain remarks before the premiere of Ubu Roi, M. Jarry reportedly invited the audience to read into it as much or little as they chose. “You are free to see in M. Ubu however many allusions you care to,” he said, “or else a simple puppet.” While M. Jarry is frequently described as a symbolist playwright, the Ubu plays seem to have been more about generating shock-value than an exercise in the careful exploration of ideas or semiotic intricacy. (So much easier to throw-up a mish-mash of craziness and leave it to the audience to sort-out.)

Ms. DesLauriers, however, has been more than willing to take M. Jarry’s bait and shape the play into something meaningful. She takes every opportunity to chock the production as full of significance, historical reference, and contemporary relevance as the script will permit. Shit jokes may have landed outrageously on a late-nineteenth century audience, but she seems well-aware of the need to do more with the material today. Her expressive dramaturgy was perhaps given as much license by the occasionally self-referential quality of the text as its looseness and silliness. (“The money-making operation of a theatre relies on the smooth operation of its trap door,” complains the obese Ubu, who finds himself half-stuck in a sewer hole. And later: “This play is already quite too long.”)  She could play with the play-i-ness.

M. Jarry’s comment about the puppet-like vacuousness of Ubu may have inspired Ms. DesLauriers to make liberal use of puppetry throughout the production – from the Muppet-like rendering of Ubu’s conscience to the imaginative, varied use of wayang-like shadow-play, to the deconstruction of the set to enact the cryptic, out-of-nowhere, final stage direction in M. Jarry’s script, “A crocodile crosses the stage and the play ends.” 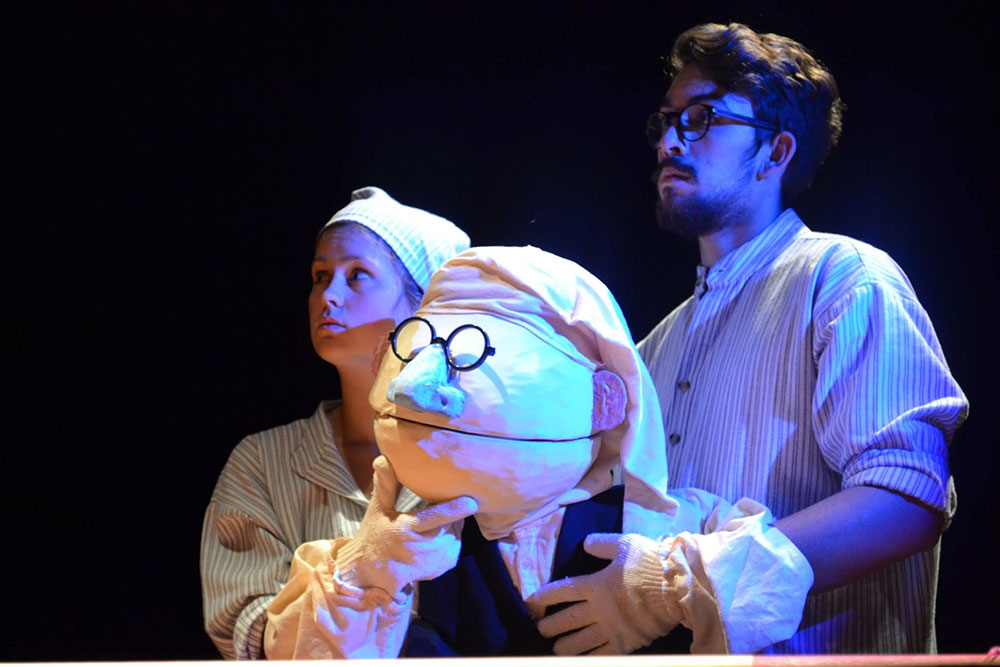 The nutty characters are played with the delight and freedom nutty characters deserve. Within tightly blocked, meticulously choreographed interactions, the actors have been set free to fully exploit the odd-for-odd’s-sake quality of each role. They have also been liberated from gender, with men playing the women’s parts and vice-versa. Eddy Van Wyk plays the screw-loose and sinister Ubu as a forceful cross of Idi Amin, a carnival huckster, and a character from Jersey Shore. 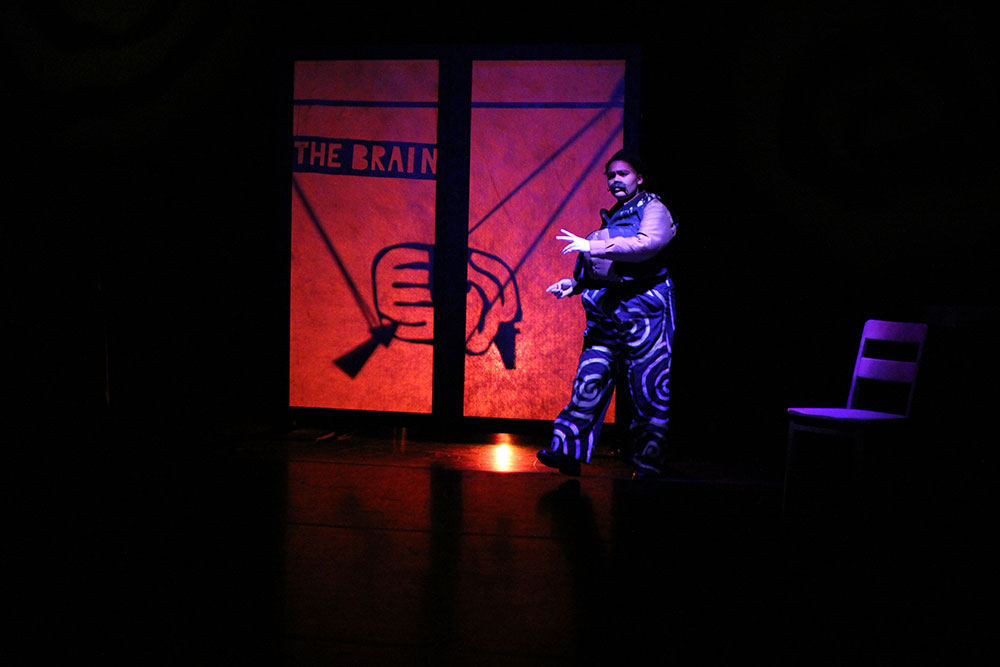 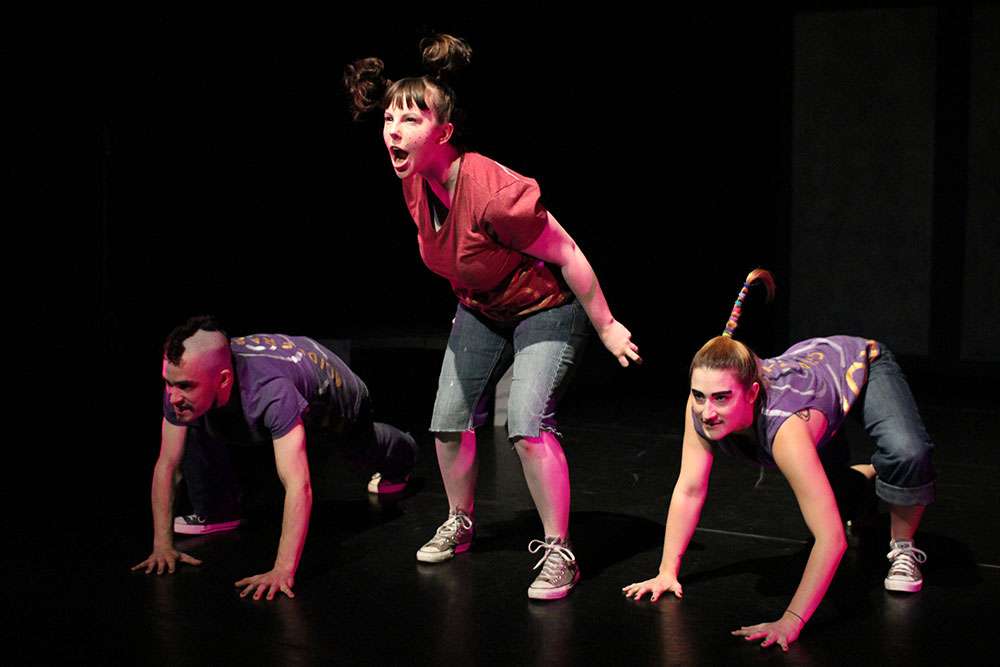 Coral Fiedler provides a zany pseudo-contrast to Ubu’s pataphysical bullshit-artistry in the role of the thoroughly victimized, elderly practitioner of genuine science (the sociology of polyhedrons, no less). Steffi Munshaw is in super voice and ghostly inanity as Ubu’s oft-consulted-but-never-followed conscience; and she’s also a damned-good puppeteer. As the Egyptian nobleman who spends his nights working the sewers and his days working Ubu’s wife, Jillian Walchuck flexes and preens with a deliciously self-involved lack of self-awareness. But the vampy star-turn in the play clearly belongs to Carmine Santavenere as the voluptuous Ma Ubu. Her flamboyant entrance is a knockout.

SFU’s production of Ubu Cocu is instructive – and well worth seeing – because it shows how a team of thoughtful, committed artists can alchemize a forgettable play by willing it to be memorable. Pataphysical science, indeed. 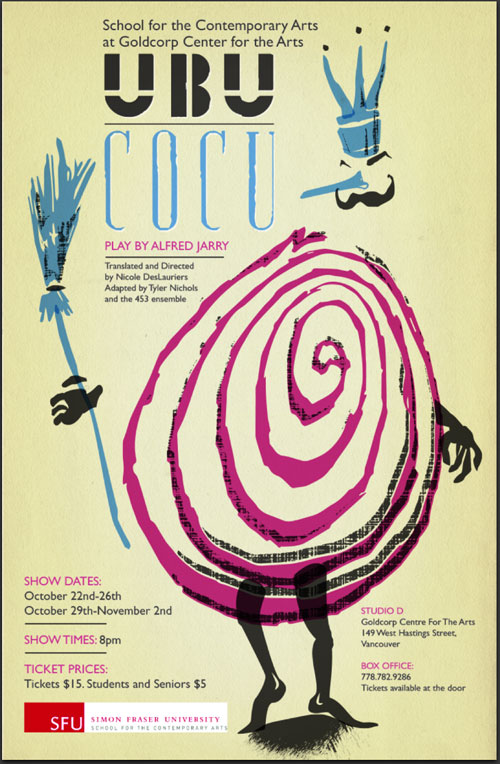 Thank you, Davey Calderon, PR Representative of the SFU Woodward’s Theatre Student Union, for contacting VANDOCUMENT about Ubu Cocu and for facilitating our involvement to conduct a review. We would also like to thank stage manager Lili Morschbacher, technical director Taylor Janzen, and everyone involved in this production.