Creating A Place For Our Stories To Be Shared

We acknowledge that Vancouver is located on unceded Indigenous land belonging to the Coast Salish peoples.

No small task, but this is a woman with a huge heart and enormous goals. Her traditional names, “strong woman” and “strong hearted woman,” are spot-on appropriate.

A Traditional Mother, an Elder in Training, as well as a Circle Facilitator, Debbie Krull is a force. She is also on the board of the Downtown Eastside Neighbourhood Council (DNC), a co-founder of the Anti Poverty Committee, and has recently been elected onto Ray Cam‘s Board of Directors of both the Association and Co-Op. 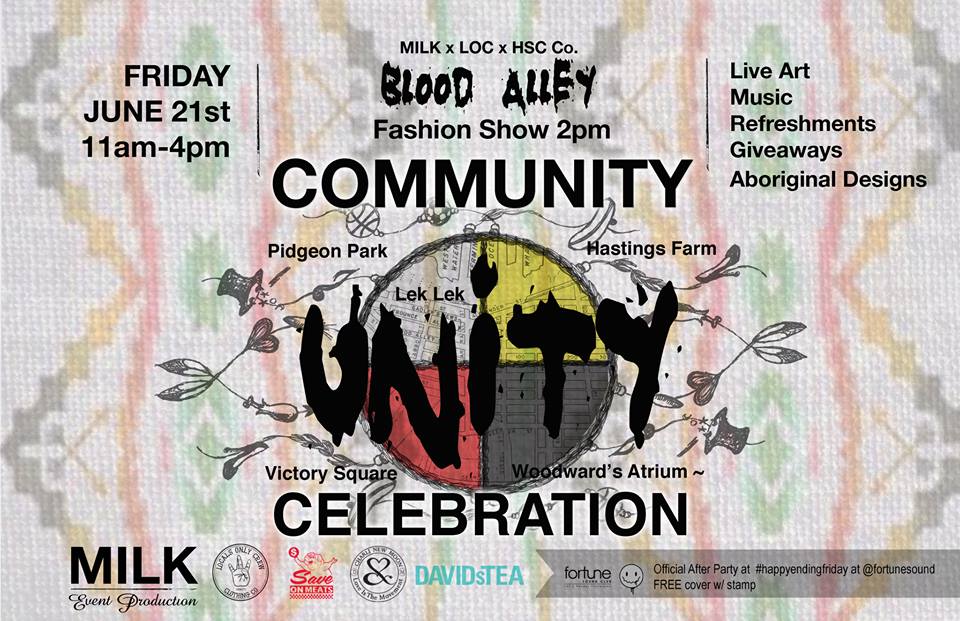 We met at Save On Meats, one of the Celebration’s sponsors, and where much of the event’s planning took place. Debbie arrives fresh from a soccer practice, still dressed in her goalkeeper gear. Yet she wasn’t showing any signs of exhaustion, and was instead highly excited to talk with VANDOCUMENT about the Community Unity Celebration.

The soccer league that Debbie plays for actually serves as an appropriate intro into her personality, how she approaches the challenges of life, and the overall theme of the Community Unity Celebration, “a day of fun, with zero politics.”

The Vancouver Street Soccer League “is made up of teams that provide friendship for the homeless, physical fitness for the ill and addicted, direction for at-risk youth, and cultural focus for other unique communities such as inner-city First Nations people” (from the Vancouver Street Soccer League website). It teaches people to learn how to have fun again, which Debbie admits, “is oddly enough a really huge challenge.”

Although Debbie has over a decade of deep involvement in activism, including being a veteran of the Woodsquat, she does not like to be identified as an activist. Instead, she prefers Traditional Mother, which more accurately describes what Debbie wants most for her communities: healing, a place to share our stories, and a feeling of belonging.

Being an adoptee, Debbie has a history of being displaced.

She was born in Chilliwack, and was moved to various cities. Her “most stable upbringing was in Salmon Arm,” where her adopted parents raised her.

Debbie admits she was an angry younger person. But at age 19, she found out that her birth mother had been an adult entertainment dancer in the Downtown Eastside.

Rather than succumb to her angry youth, Debbie found growth and self discovery in Vancouver. “I knew my story would be here, so that’s what I came to find,” Debbie recollects. “If not directly through family, then indirectly through people,” which happened when she happened to engage in a conversation with a resident of the redeveloped Woodwards after a W2 public discussion of the Stanley Cup Riot.

Years earlier, at the Woodward’s Squat, or “Woodsquat,” Debbie’s involvement with the DTES began.

She had just arrived in Vancouver, and it was here that Debbie met her Elder, Margaret Harris, who Debbie affectionately calls “Grandma.”

Meeting her Elder was the catalyst for Debbie to grow from a displaced girl into a strong, giving, supportive, and encouraging woman. Through Elder Margaret Harris’ group, Traditional Mothers, as well as the teachings of many women in the community, Debbie was taught traditional lessons, such as the Medicine Wheel and the Healing Circle. From the Healing Circle came her mantra, “Everyone is welcome. No one is turned away.”

Debbie’s personality connected with these lessons instantly. She extends this inclusivity by stating that “everyone has an aboriginal identity.”

Her positivity is admirable. She is entirely accepting of people’s differences. It’s exciting and humbling.

In the circles that she leads, she talks about the importance of people “sharing their truths. It may not be THE truth, but it’s their truth.” And that, to Debbie, means everything. “That’s why all this is meaningful. You have to create those spaces for people to share their stories. They’re not going to come out otherwise.”

Debbie’s long term goal has been to have a space for this witnessing, this awareness of everyone’s lives around us, available to everyone in all communities. A coming together. A place to share your news, “whether it’s a birth, a death, or a wedding, a birthday, a graduation… It’s beautiful to witness people of your community go through the different stages of life.”

Although she knows the power of these benefits, and believes that “this has to come out to the greater people at large,” unfortunately, “there’s nowhere in our city spaces where that exists (on a larger, public scale).” 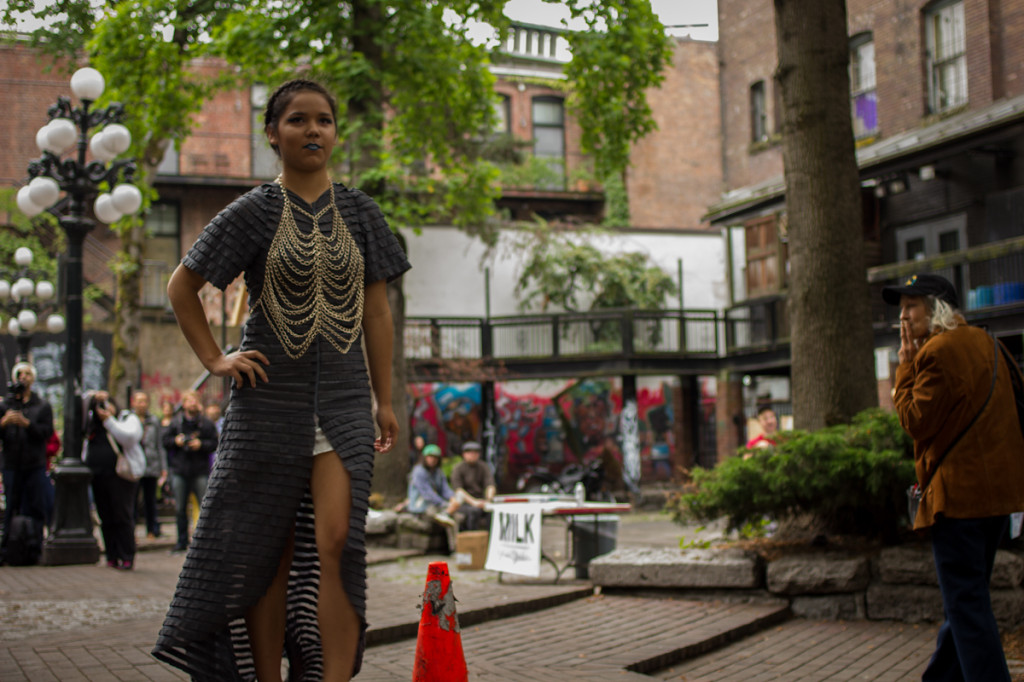 The opportunity to realize her goal came thanks to her involvement with Woodsquat.

One of the visions the Woodsquat community had put forward was to revitalize the Lek Lek I, the traditional name of the Blood Alley area, which was an international market established 6000 years ago.

Seasonal Villages were part of the Lek Lek I, and ancestors of Scott Clark (Executive Director at Aboriginal Life In Vancouver Enhancement (ALIVE) society) had one of those longhouses. Debbie gifted 20 blankets to Scott and the beginnings of the Community Unity Celebration began to take shape.

Part of the Lek Lek I revitalization is a reaction to the rapid rate of change happening in the DTES, which is not just an issue of the displacement of people. It has become an issue of the displacement of community organizations, such as the loss of venues like Red Gate and W2 (Debbie says that W2’s “goodwill is exhausted”), and threats to communities such as Pigeon Park, which feels like it might not be here in a year or two. “We have to work together right now, we HAVE to if we want to protect the community itself and the people at large.”

“When you get a circle going and people’s capacities build,” Debbie explains, “everybody brings their own skill set and the teachings they’ve learned in their journey. There’s a lot of strength that comes from a group of people if they create the space for respectful, meaningful, and inclusive dialogue in sharing. Once that’s established, it’s really powerful. It helps you be able to handle the challenges in life.” 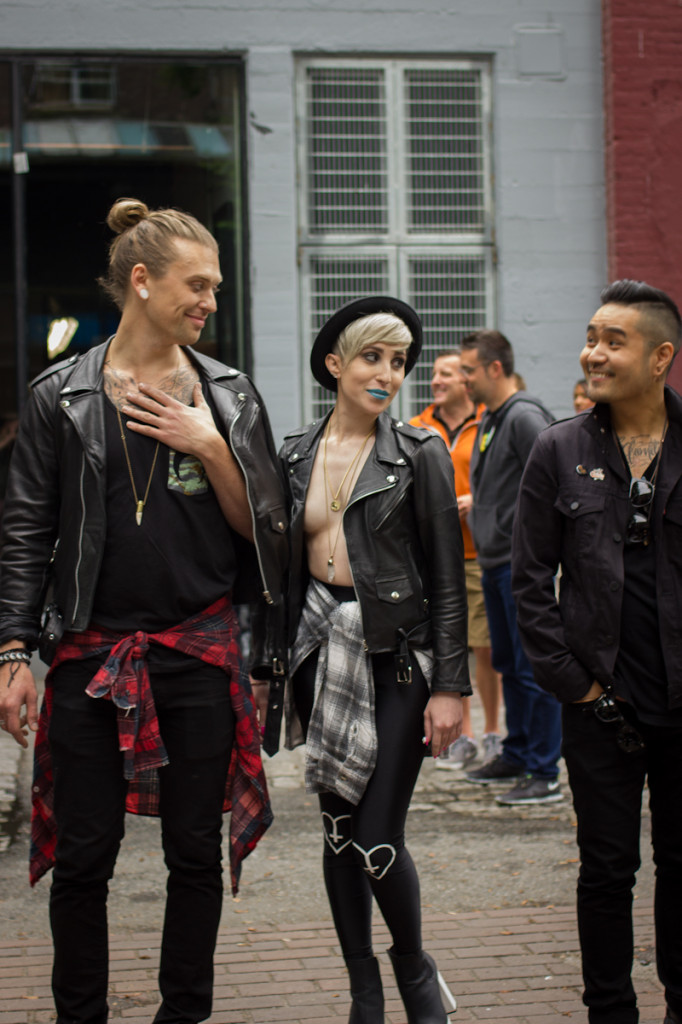 Initially, Debbie had no idea who would be part of that process, she “just put it out there.”

She connected with Joleen Mitton of the Pacific Association of First Nation’s Women, Monika Benkovich of MILK Event Production, and Diane Johnston of Pigeon Park Street Market (who Debbie says has “a different frequency – not just Thunderbird medicine, she is a Thunder BEING!”). She also reached out to Wes Regan of Hastings Crossing, who is working with W2 to write a plan to secure their operational space.

Debbie’s role in all this is knowing who’s engaged, knowing their work styles, and nurturing those relationships. She says, “We all have gifts to learn, and those are gifts to share.” It is not only our responsibility to honour the stories and knowledge of others, we all have responsibility to share that knowledge.

The Community Unity Celebration was influenced heavily by traditions that exemplify these responsibilities, such as Pow Wow nights and West Coast nights at the Friendship Centre, weekly events that follow traditional protocol. At these nights, people of all ages are invited to witness and socialize.

The Community Unity Celebration acts as a larger, more public version of this Healing Circle. It is about inclusivity. It is about being open to the differences amongst all of us.

Debbie urges, “we just need to share our stories and come up with a symbol of unity.” The Community Unity Celebration aims to be that symbol, to be an ongoing event, held four times per year, that people can look forward to, can contribute to, and can use as a platform to tell their stories.

Some problems occurred: ALIVE had to pull out. Hastings Farm and Pigeon Park weren’t activated.

Despite these setbacks, Debbie decided to “just go ahead and do this.” And with this determination to create an inclusive, positive event despite zero budget, she aims to “hopefully inspire others to do the same.”

What are future Community Unity Celebrations going to look like? With the appreciation and positivity that the first event was received with, we can look forward to growth and stronger unity. 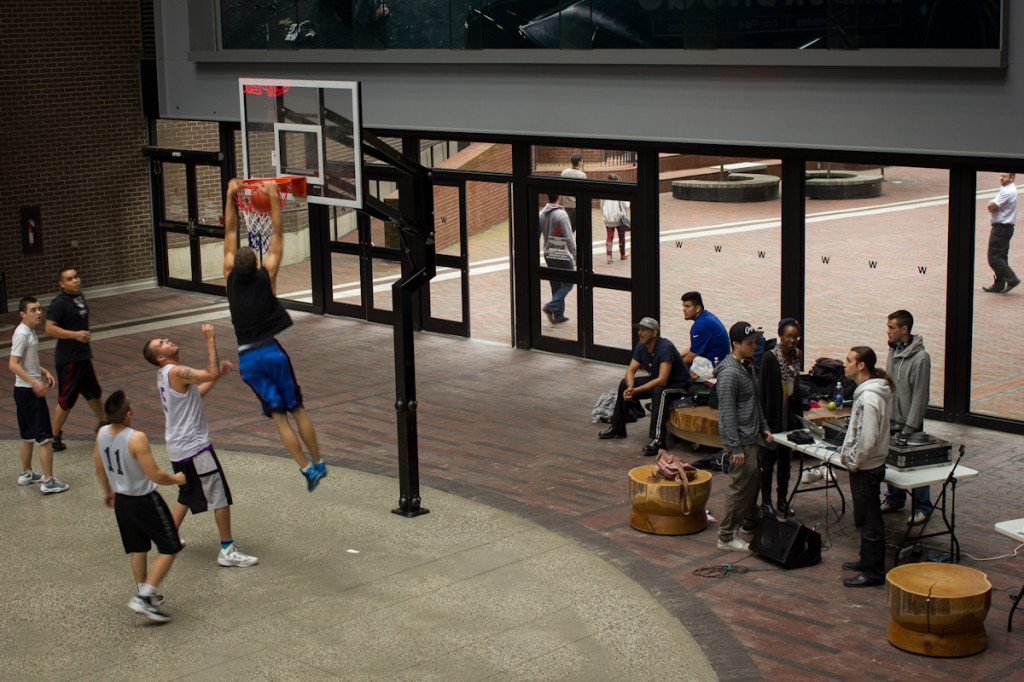 Case in point: Robert Holler, manager of the Native Education College (NEC) Nighthawks, loved the event. He recognized the diversity and the intent. He knew right away what Debbie was trying to achieve.

His one complaint: the only thing missing was food. Debbie says that she didn’t have enough time to organize a giveaway, since the Celebration is based off the longhouse model in which food should be given away, not sold.

As it turns out, Robert coordinates the food bank at NEC, and he offered to arrange this for the next Celebration.

Debbie exclaims surprisingly, “What are the chances?!” Well, when you’ve given as much as you have to the community as Debbie Strong Woman Krull and her team have, the connections are there and the chances are very, very good.

Just as the future for the Community Unity Celebration is looking strong, promising, and very, very good.