Written by Justin Ramsey
Re:generation is a special series of articles responding to Generation Hot at the 2016 Vancouver Fringe Festival. This is part 4 of 5. 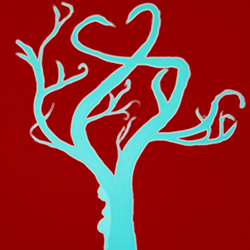 Before Saving Mother begins, Coast Salish-Nez Perce community activist and writer Kat Norris takes the stage and, drum in hand, asks us to rise to our feet and join her in a Thunder and Lightning Song. The lyrics are sung in the language of the Coast Salish people, but we catch on, and we may move however we please; I step – or stamp, more like – in time with the drum.

Norris plays the grandmother in Saving Mother, which begins with her telling her granddaughter about the Windigo: an insatiably greedy monster that devours people. The Windigo can never have enough; it can erase entire communities and villages and still never feel full. Most crucially: people can become Windigo. Sound familiar?

All folkloric monsters, whether ancient deities or biblical demons, were inspired from somewhere: their forms from animals, their attributes from people. In its inception, the Windigo must’ve been a fable warning against selfishness and thoughtless violence; now, it seems to have been prophesising plutocrats – the heroes of the modern day – and their willingness to do anything as long as it turns a profit.

As the elder says that humans can become Windigo, her granddaughter frolics around the stage, only half-paying attention. The set is minimal; there’s a chair in which the grandmother sits, an easel with paper, a backdrop of white curtains and, just in front of these, a wheeled stretcher to which a woman is bound, lying on her back. I can’t help but notice a striking visual link between this woman and the grandmother, as they both wear flowing red dresses.

A man in gloves towers over the reclined woman; he seems to be a doctor or surgeon, though his black suit looks out of place. Subtly – before the audience can realise what’s happening – a strident, whirring noise blares out as the man holds a drill over his patient and bores into her abdomen; dark grey sludge spurts out onto the stage. The grandmother disappears offstage; the young girl contemplates the grime with curiosity, dabbing her fingers in it before rushing to the easel. As she tries to finger-paint an image of Windigo, she calls out to the woman in red, who she addresses as ‘Mother’: “What makes Windigo Windigo?” But there is no answer; the man in the suit has whisked ‘Mother’ out of sight, leaving the girl alone. She’s frantic, panicking: “Mommy, where are you?” she screams with such visceral terror that I’m left winded.

The question ‘What makes Windigo Windigo?’ recurs throughout Saving Mother, mostly as a whisper that susurrates eerily through the speaker, though it’s never answered. As the girl crumples down crying, the man in the suit rushes to her side. He sits by her, and pulls her into a hug, quietly calming her; and when he pulls away, he’s tethered the girl with a cord around her wrist. In an intensely physical scene the girl tries in vain to free herself; she struggles against him, or dashes away, only to be pulled to the ground and wrenched across the pavement; it’s palpably painful to watch, and the sequence unfolds at a breakneck pace yet seems interminably long, torturously drawn-out. Again, I find it hard to breathe, but it’s impossible not to watch.

She succumbs at last, standing lifelessly, no longer able to see her ‘Mother’; the man drapes his suit jacket over the girl’s shoulders. She delivers her monologues – on assimilation, indoctrination, and erasure – with heartbreaking poignancy, a power that channels her brittle vulnerability into sheer, blunt force. Playwright Crystal Smith’s ambitious script is handled remarkably by Zofia Rose Musiej, who delivers most of the lines herself; neither the man nor ‘Mother’ ever speak.

The turning point comes when the man wheels out ‘Mother’ on her stretcher, and coerces the girl into drilling. Awakening to her senses, the girl resists, fending him off in another harsh confrontation while jarring, high-contrast projections of oilfields, tar sands, pipelines, and their ecological devastation flash violently across the white curtains; more of the crude, black-grey gunk spatters the ground. It’s clear now what ‘Mother’ represents; she is at once the girl’s mother and Mother Earth.

This time, the girl can’t be strong-armed; the girl pushes the man away and unties her Mother, who stands shakily from the gurney. She collapses into her daughter’s arms, who in turn is embraced by the grandmother; the play ends with these three generations of Indigenous women supporting one another.

Saving Mother is a brilliant work of theatre, and in my view the most successful in Generation Hot. If this programme is meant to highlight the role of arts in the battle against climate change, none other achieves this with the same conviction as Saving Mother. The play is bleak, but its appeal is so strong and its message so powerful that one can’t help but think that real change might still be inspired; that eventually, decency, compassion and necessity would prompt our ass-kissing lawmakers to take a hard line against cruelty and greed.

And if they were to take a principled stance, what would the future look like?

This is Re:generation – A special series of articles responding to Generation Hot at the 2016 Vancouver Fringe Festival.
Read part 5, When Things Go Sideways: Apocalypse Parade, Possible Worlds and the Value of Life.

One Response to Razing Our Children

A Case for Hugging Trees

Fleeing From Our Problems