One Thousand Ways of Doing Nothing

The Lilacs Tackles the Millennial Crisis

Written by Justin Ramsey
Re:generation is a special series of articles responding to Generation Hot at the 2016 Vancouver Fringe Festival. This is part 1 of 5. 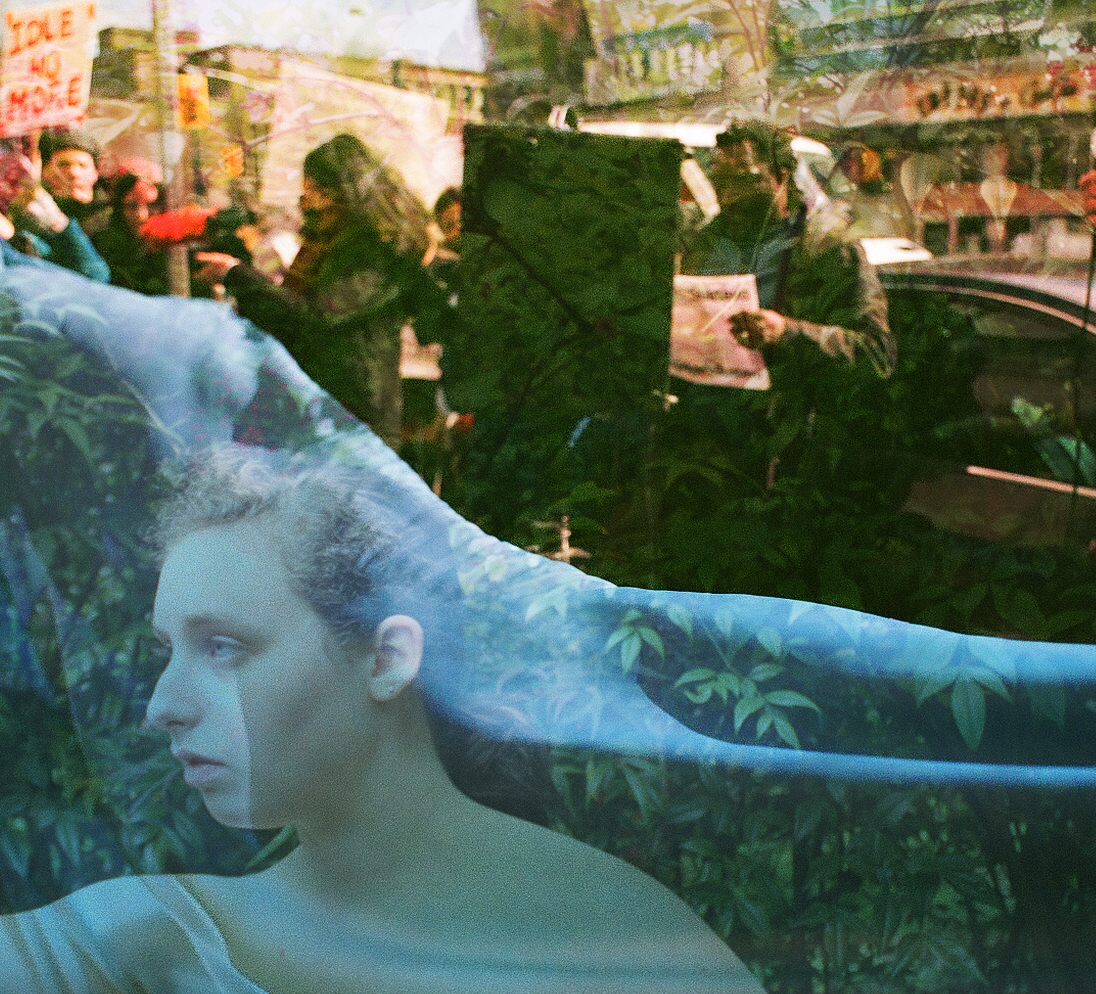 At six o’ clock on a sunny Saturday, I arrive at Granville Island. I’m early, so I walk around the pond, and along the boardwalk south of the market. It’s a stunning September evening with an unusual sky: a sheet of high, flat clouds, all drifting at the same altitude. They look glassy and pale, like ice on a lake, fractures zigzagging between them. The sun appears silvery through this veil, its light scattering through the cracks in jagged, crystalline rays. I extend my walk, all the way around the public market; it’s so exquisite outdoors that the thought of spending the evening in a theatre doesn’t appeal.

I’m here to review Programs B and C of Generation Hot, a collaborative project between the Vancouver Fringe Festival and theatre company The Only Animal. The aim of the project is to mentor young artists in creating new works that engage with the theme of climate change.

The venue is unusual: it’s the paid parking lot – the covered one on Anderson Street. At quarter after six, I walk in. The east side of the lot is curtained off; I show my ticket and pass to an usher who guides me through.

When I walk in, an elegiac piano ballad is playing. It’s coming through a speaker hung a bit haphazardly off the stage lights. The song is a lamentation of youth. At first, I listen with rapt attention, trying to parse words that might help me identify it; but soon, I lose my aural hold on the lyrics. They soften and disperse, as the mournful melody grows inextricable from the theatre’s ambience. And the longer I listen, the more my attention wanders: to the curtain of cut-up tarps zip-tied to a clothesline, cordoning off the theatre space from the parking lot; to the freestanding stage lights on tripods, spilling a rosy light onto the concrete floor – it pools on parking stalls 42 and 43. The whole thing has a distinct DIY feel, which seems very in-character for Generation Hot.

Generation Hot includes my generation: the millennials. Author and journalist Mark Hertsgaard coined the term in his 2011 book Hot: Living Through The Next Fifty Years On Earth to refer to everyone born after June 23, 1988: the date when NASA reported to the US Senate that greenhouse gases were raising global temperatures. As soon as the warning was given, the New York Times published the story as front-page news, other media outlets broadcast the disturbing message, and now, almost thirty years later – the most recent of which have had record-shattering temperatures – people are still questioning whether or not climate change is real, as though the facts were ever up for debate.

Conveyed through a series of interwoven vignettes, The Lilacs That Come a Month Early Are Still So Beautiful captures the vacillation between hope and hopelessness, apathy and dread that has defined my generation’s coming-of-age; we’ve been told that everything must change, yet have watched bewildered as nothing has. The set is simple, but effective: a bright blue blanket evokes many things, including fresh water, a ceremonial artefact, a small divide that could easily be bridged, except that people allow it to get in their way. It’s a beautiful centrepiece to the otherwise sparse production.

Of the various viewpoints explored in The Lilacs, the one most immediately familiar to me is that of the two friends: a pair of quintessential millennials who liken talking about climate change to saying “Lord Voldemort” out loud. They’re hilarious, but not quite parodic; I feel like I know these girls. They’re familiar to me, as is their tragicomic struggle to comprehend global warming: a phenomenon which, even if all emissions were to cease overnight, would still continue for at least three or four decades due to the sheer volume of greenhouse gas in the atmosphere. Their frustrations are funny, but relatable; watching their scenes, I want to call to them, to reassure them that their attempts to live sustainably – no matter how futile they might seem – are worth the effort.

If there is any hope to be had, it lies indeed with Generation Hot. It falls to my peers and I to choose preservation over avarice, a choice that our predecessors failed to make. It’s up to us to accept the fact that “economic growth” is a kneejerk term, a hypnotic induction that flicks our minds off. Economies are numbers, intangible and abstract. Oil spill clean-ups look great on the GDP. So do epidemics, for that matter. When surplus produce is harvested, crates of strawberries are dumped, apples are destroyed, and vegetables are ploughed back into the soil to keep prices competitive. We’ve created a society wherein hypothetical ratios and percentages take precedence over imminent needs. It’s a system that stigmatises charity – where anything that can’t be sold needs to be abolished.

But the economic powers at large don’t want us coming to these conclusions. We’re the test subjects in a digital revolution that would have our brains replaced with technology, the same way the Industrial Revolution replaced the human body with machines. On my Facebook feed, a thirty-degree day in March became a bikini-bearing beachside photo op for several of my peers – all of whom I promptly un-friended – instead of a cause for worry. I see shades of this in these two girls as they bicker and banter; and in situations such as these, it’s easy to lose faith in Generation Hot.

This exasperation is something that one character, an Indigenous grandmother, understands acutely. From her vantage, as a victim of brutal injustice, the marginalisation and oppression of First Nations people is bound up with the exploitation of nature. Her people and her land are both in jeopardy, and protecting one inherently demands protecting the other. The woman’s disposition is not angry. An impassioned plea arises now and again in her speech, but her manner is serene: one of disappointment, maybe even fatigue. She’s been watching society tank – pardon the oil pun – for too long.

The holistic wisdom of the elder counterbalances the millennials’ fraught frustrations. And just so: my generation processes things differently. A recent study by Microsoft revealed that the average human attention span has plummeted from around twelve seconds in 2000 to a measly eight seconds – lower than a goldfish’s – owed largely to the Internet and mobile devices. My peers don’t commit information to memory as easily, which the tech giant spins as “our brains prioritising important information better”. This, of course, is hollow placating; but then again, hollow placating appeals to a generation that would rather hear positive lies than negative truths.

I’m referring to the sweeping aversion to actually talking about problems, manifest in the trigger warnings and “micro-aggressions” that have been gutting liberal arts educations since Generation Hot entered college. Because if we close our eyes and cover our ears and pretend the world is perfect, who’s to say that it’s not? Needless to say, this mentality doesn’t bode well for coping with climate change, much less for combating it. In one poignant scene in The Lilacs, three friends are sitting down to Passover dinner when one of them expresses sympathy for the Egyptians in the biblical story; she’s troubled by the idea of celebrating violent conquest rather than advancing mutual respect and understanding. This sentiment proves too radical for her companions, who leave after condemning her for ruining their celebration with ‘negativity’.

Another powerful perspective – both a counterpoint and a companion to the holistic, far-seeing grandmother – comes from a victim of abuse. She barely addresses the climate crisis as she pens a wistful letter, too enmeshed by her own plight to worry about that of the world. But the connections are there: her misery portends that well-studied trend linking progressive environmental policy and sustainable development with gender equality, social trust, and high quality of life. It’s a subtle reference – one that I admit I might be reading into the play – but the inclusion of this introspective character says something crucial about her society at large.

The character is conveyed beautifully by Amanda Sum, wearing a fragile smile that hangs so slightly upon her lips while seeming stretched to the point of snapping. Her voice is calm, but carries in it a delicate tremble that conveys something is seriously wrong; it isn’t until the end of The Lilacs that she reveals she was raped by someone close to her.

She intrigues me because there are so many things notably un-millennial about her: her patience as she writes out a letter in longhand; her grappling with trauma in a way that is open and vulnerable, while avoiding the self-centred pity-mongering of vlogging and Facebook rants. During the play, one of the narrators, an enigmatic figure claiming to be ‘the last of his kind’, tells us that the world ended five minutes ago. If that’s the case, then I think the writing woman, despite her remove from the climate disaster, marked a milestone for Generation Hot.

There’s still distance between the play’s script and the issues at hand; only a couple characters really discuss the environmental crises, and when they do, sustainable life choices are treated as moot and futile. Intentionally or not, it reflects the zeitgeist of climate change. Is this an intentional choice? If so, it presumes a sharp and critical audience. I wish The Lilacs would delve deeper into the questions raised rather than irreverently skimming the surface, even if this is a more accurate portrayal of present attitudes.

Even so, the carefully chosen viewpoints bring much-needed perspective and depth to an issue all too often relegated to scary statistics and apocalyptic projections. The Lilacs takes the great nightmare that is climate change and scales it down to a size that we can wrestle with. Through The Lilacs, a spectator can find a storyteller she can empathise with, and through that touchstone, think more deeply about the many challenges that lie ahead for Generation Hot.

This is Re:generation – A special series of articles responding to Generation Hot at the 2016 Vancouver Fringe Festival.
Read part 2, Fleeing From Our Problems: Cosmic Justice On Accountability.

One Response to One Thousand Ways of Doing Nothing

Fleeing From Our Problems