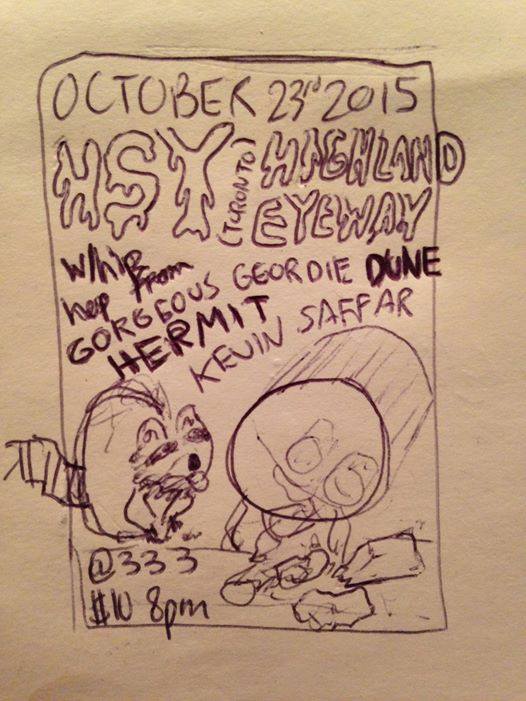 With a name like “Trashy Show”, it’s easy to jump to conclusions about the event. It doesn’t help that it’s at a notoriously run-down venue, either. Due to the number of people who RSVP’d “Yes” for October 23rd, the space was changed from the original location to 333 Clark Drive, which has a reputation based mainly on hearsay. Some describe it as a concrete lot with a door while others call it a safety hazard, yet the general consensus is positive. Even their fans admit that the high RSVP count is disconcerting for safety reasons, but other than that, the show promises to be a noteworthy outing. The lineup boasts a successful Toronto band, HSY (pronounced “hussy”), and three local rappers: Hermit, Gorgeous Geordie, and Kevin Saffar. The remaining two are Dune and Highland Eyeway, Vancouver bands that thrive on fuzz and high volume.

Upon arriving at 333, attendees chat happily. With a sigh of relief, they acknowledge that less than half of the 500 RSVP-ers are actually here, which means two things. First, the venue won’t be a hellish sauna fuelled by body heat, and second, there’s a chance of physically seeing the band. 333 itself is as described, although slightly nicer than anticipated. There is, in fact, only one door, and a small stage crouches at the end of the room. At the entrance, hosts collect bills and mark hands for re-admission, hugging nearly everyone they see. Blue lamps light the whole space and it has calming and surreal effect on the eyes. Objects become hard to focus on, all other shades disappear, and everything blurs into one. “This lighting is putting me into a catatonic state,” mumbles the heavily-bearded man in the corner while the women around him nod drowsily. Miraculously, everyone stays awake.

The three rappers come on first, all of which are listenable but not particularly memorable. Right away, the mood of the crowd clashes with the high energy of the performers. It’s so early in the night that most of the audience is absentmindedly talking over the music and the aforementioned lighting makes for a lacklustre ambiance. Hermit and Kevin Saffar in particular are admirably enthusiastic despite their surroundings, while Gorgeous Geordie submits and lowers his energy levels to suit the crowd’s.

The impact of the rappers’ performances also struggles due to the poor quality of the sound system. This is true for all three of them, which may lead to an inaccurate judgement of their talent as musicians. As a result, they are reduced to background noise that faintly resembles an amateurish mix tape. Several groups come in and out during the show and it only makes the crowd more distractible.

After the stage is cleared, HSY quadruples the volume with a performance that opens up a mosh pit. It’s hard to pinpoint the genre of the group; they are definitely loud, heavy, and noisy, similar to many dark subsections of punk. But the tempo is too slow and the addition of looped drum beats is reminiscent of industrial metal bands such as Ministry. As discovered later via their social media, the band refers to themselves as “punk, darkwave, garage, and sludge”. This makes sense; their electronic beats fit into the darkwave label, while the others explain their harsh, chaotic sound.

HSY’s front woman is nothing but a screaming mop of blonde hair, while two guitarists on either side of her play distorted chords. She remains relatively stationary throughout the performance, swaying from side to side with her face obscured like an aimless zombie. Fortunately, her vocals make up for the lack of excitability. Just by listening, one can tell that she is putting her all into every word leaving her mouth, though most are nearly unintelligible.

The pit, which forms almost immediately after they come onstage, is quite polite. It is quickly established as a jumping crowd rather than a fighting one, aside from two people who wrestle on the floor briefly before the band asks them to stand up. That request is the only time that HSY interacts directly with their audience, which is somewhat of a shame. It could be because every song blurs into the next, so there is almost no time for communication. On top of that, there is little variety in their set, but it does what it’s supposed to do: get people riled up. HSY is clearly a band that likes to make noise and a scene, both of which are accomplished during their twenty-minute set.

After HSY plays their last song, the most significant downfall of the evening becomes obvious; there is absolutely no established order to the lineup. While mingling in the crowd, the members of Highland Eyeway respond to queries about when they were playing with shrugs. No one else seems to know either, which makes for an unfortunate predicament. Several people leave before midnight in order to safely transit home, meaning that Highland Eyeway and Dune’s live performances are missed by a large portion of the audience.
So with bitterness and X’s on their hands, the select few (myself included) leave 333 and head back to the suburbs. HSY is the only act that hyped the crowd enough to make an impression, although the final, unwitnessed ones may have as well. Regardless of leaving early, the pleasant audience and mood makes Trashy Show positive experience. Overall, 333 seems to be more of a social environment than a spot to see a top notch show. That is, if Trashy Show is indicative of their other events.