Contemporary dance lights up the Firehall

It is possible to perceive something that isn’t actually there. Choreographers, dancers and composers create a production with many interpretations.

I am sitting in the Firehall Arts Centre theatre, about mid row, my eyes relaxed on the gravitational pull of an empty stage. The new contemporary dance performance “Things Near and Far” has not yet begun and the audience is silent. In the silence there is solitude. It creates an appetite for imagination. It is a space to be filled with dreams.

Josh Martin and Tedd Robinson are the two choreographers commissioned to create each of the performances this evening. Interestingly, they each entitled their piece “Dwellings.” The silence succumbs to an invasion of footsteps carrying three grey-clothed figures. These are dancers, Ziyian Kwan, Anne Cooper and Ron Stewart. They are not just hired bodies to dance, but rather the producers of the show. With a wealth of choreography, awards, and ninety years of dance between them, they commissioned Martin and Robinson to create unique dances for themselves. They wanted to introduce new influences that would pull movements from their bodies. Their ages range in the 40’s and 50’s. And from all this they are creating new forms in the present. Rather than aging stars, Kwan, Cooper and Stewart are more developed, having more experience to inspire their performances, to draw out and bring to the Kinesphere on the stage. 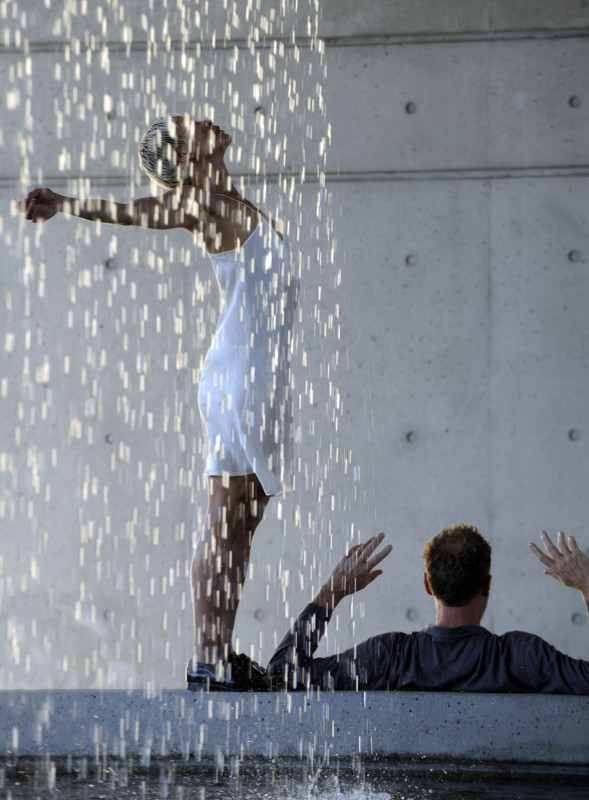 Ziyian Kwan with Ron Stewart in Things Near and Far, Photography by Chris Randle.

It is a joy to witness their grey clothed bodies twitching, weaving and fumbling, making slips and strange sounds. They begin making funny gestures with their shoulders and hands. The audience is laughing. It’s great when a choreographer brings out gestures like these because they’re ones we use everyday in conversation, so as an audience we get it.

The choreographer of this first performance is Josh Martin, commissioned, in part, because of his age. Seeing flesh and bone as tools to be wielded at the will of a younger artist, Martin’s style of choreography was chosen to shape a strong dynamic with more experienced dancers.

Martin, a dancer himself works, primarily as Artistic Co-Director of 605 Collective. He was the recipient of the Vancouver’s 2013 Mayor’s Arts Award for Emerging Dance Artist. After the performance, I caught up with him to ask if he would reveal some of his thoughts on choreographing for the trio. “I had to consider where I fit in from a generational perspective of what they expected from me.  They’re such distinct presences without even moving.  Just seeing them stand side-by-side was already inspiring. Getting them to dance with a sense of togetherness was difficult in comparison to other dancers I’ve worked with.  But then it also became a really interesting challenge.”

I look around the room at a laughing audience as the dancers continue to move in quirky humorous ways. Suddenly a beat kicks in and they move more quickly together culminating they collapse with the closing beat to the floor. In the darkness Kwan, Cooper and Stewart lay shivering in what seems to be complete desperation, as though their spirits are pushing against their  limp bodies pulsing from the inside. Rolling together across the stage, the music moves with them and provides them the strength to push their torsos off the floor. Is the music following their movements or are they like animals being played, wielded, whipped by the music? Who is master? It’s a parentage lost and found, and lost again.

Martin worked closely with the composer, Stefan Smulovitz to create a music score specifically for this production. Discussing his attraction to this project, Smulovitz explains, “Dance is this amazing thing where your flights of imagination and expressions of emotions are manifest and given reality via the human body. An emphasis on sounds with visceral meanings come out in my work. The body brings the music back to the ground and tension and release, push and pull become the guiding principles. Once the music is shifted to this visceral space dancer and musician are speaking the same language but just manifested differently.”

The music is captivating with the sound of heavy pounding like drums made of iron and leather from some dark industrious place. The three rise up. Their dance steps grow more and more elegant. A startling roar blasts through the sound speakers. The audience stays still.

The dancers touch each other, weaving between one another like a braid of hair. The braid grows wider as they move apart, not touching but still weaving, repeatedly moving in grace and then they split and walk off stage to the applause of the audience. 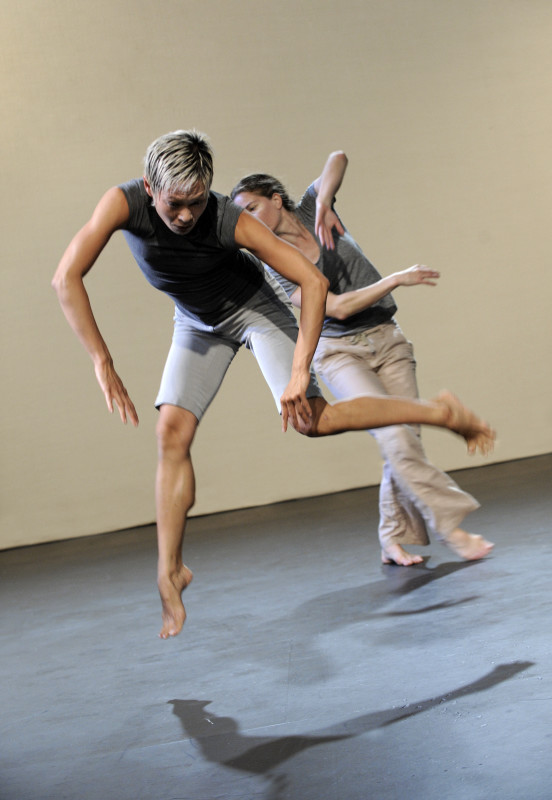 Ziyian Kwan, Anne Cooper in Things Near and Far, Photography by Chris Randle

After intermission, the second performance begins with the three entering the stage again, this time dressed in folded white robes like Grecian mythological gods. The trio’s shadow reflections are imprinted onto the stage as light designer, James Proudfoot follows their movements with high beams. This performance is choreographed by Robinson, the senior member of the group. In addition to co-directing Centre Q in Quyon, Quebec, Robinson is the artistic director of 10 Gates Dancing, and the 2014 recipient of the Walter Carsen Prize.

The performance begins with the dancers gracefully balancing wooden boards on their shoulders and heads. Then, Stewart gruffly puts a lumberjack plaid mac over his majestic Grecian robes. He picks up a power drill and begins drilling wooden boards together. Kwan and Cooper throw on plaid macs and get to work with Stewart.

Later, Robinson explains, “I had to do this. I found that the personalities of these three are not afraid to express their disagreement with each other. The only way I’m going to solve this is to make them cooperate… they’re going to have to build something together and work with power drills.”

As the trio hurry in their work the music rises to a climactic roar. Suddenly the sound in the room shifts to the strangest untuned frequency. Like white noise it is loud and silent simultaneously, soothing and irritating. Each of the dancers immediately stop their work and stare stunned toward the audience while this strange noise drowns the room. 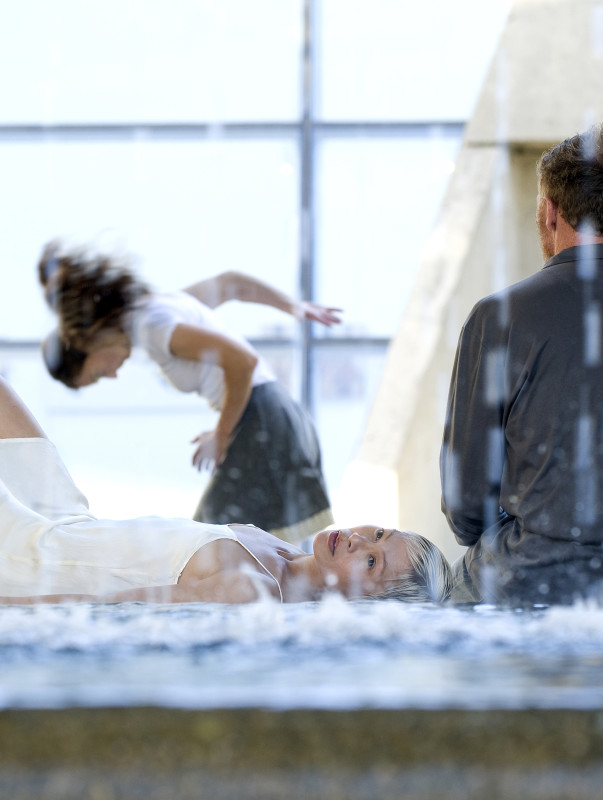 This soundscape was composed by Charles Quevillon. “I used the dancer’s voice, my voice, clarinet, a musical saw, a guitar, some electronic sounds, sounds from a very old and untuned piano hit with mallets.” He continues, “I like to work the relation between the images and movement. You can really change the feeling associated with a movement by changing the music.”

In the still of this elusive soundscape, the dancers remove their plaid macs. The three are again like gods in their folded white robes. They seem truly in wonder at the thing they have built together. It resembles a fenced garden. Stepping into it slowly, they each lift little wooden stools atop each other’s heads like a coronation ceremony. The music and their faces are so peaceful as they stare towards the audience. Looking down to their shadows on stage, the light casts forms that do not resemble crowns on their heads. They are more like the hats or regalia that shamans or sherpas wear. And when I look back into the dancers eyes, staring towards the audience, they do not see us. They are inside, between worlds, lost or going home.

With the performance over, I wondered at the meaning of it all and wanted to understand if there was a single narrative. In that quest I went to each of the dancers, choreographers and composers, and asked what their intention and interpretation was. They voiced the ways in which  they each had their own individual, unique and private meaning. It seems appropriate then, we are intended to be on our own. This is the point of a theatre, to be alone within our own beliefs and perceptions and project them onto the stage. Robinson elaborates on this by stating, “Good art will make you question your interpretation and throw a wrench into your expectations, or perhaps jar you into a whole new way of seeing or hearing or tasting or feeling or thinking.”

After the performance I walked out onto the street filled with joy and inspired by the effect it has had on my consciousness. Each “Dwellings” was about something that never existed.  Which could have been a world of hedonism, of the pleasures of life, of lost souls, in the company of gods, in the company of shamans. It is an important work to me. It has let me dream.

“OW”: How does it feel and what does it look like?