The Lady is a Tramp: Klasika by Barbara Adler 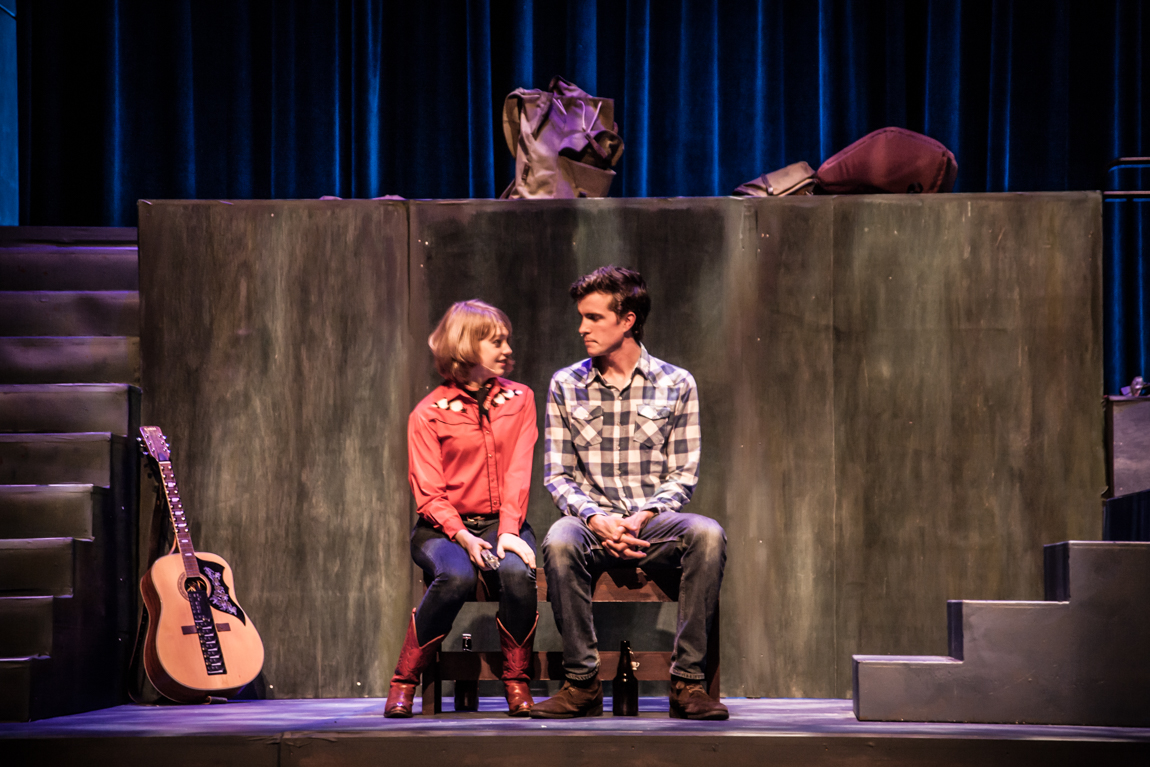 Long before his rise to prominence as one of the leading thinkers of the Frankfurt School, Herbert Marcuse was a something of a young aesthete. His doctoral dissertation examined the Künstlerroman, a literary genre that situates the artist in a struggle against her prosaic, everyday milieu. Arguing that the aesthetic experience had been cast outside of everyday life, Marcuse harkened back to a mythologised, heroic time: when history was inextricable from epic poetry, and “where life itself was art, and mythology life”. And he attested that this view of the world as an intrinsically mystic, artful place survived in underground counter-cultural movements – such as spiritualism, or the occult – that ran contrary to mundane reality and stirred imagination.

Perhaps this same hope – this need to view our mapped and measured environs through curious, newly mystified eyes – underpins the counter-cultural movement of tramping. It’s a practice that emerged in 1910, in what is now the Czech Republic. People would dress as cowboys, “Indians”, and pioneers to evoke the idealised American frontier: a vast new world, promising liberation and adventure. Tramping is also the inspiration behind Klasika, a new musical production written and directed by Barbara Adler.

After undertaking extensive research throughout her MFA at Simon Fraser University’s School for the Contemporary Arts, Adler composed Klasika based on her own experiences of tramping in the Czech Republic last year. Numerous performances and projects ensued, including a vandr through Vancouver and a night of camping in Pandora Park, which challenged participants to approach their well-trodden stomping grounds afresh. Klasika is the impressive culmination of Adler’s process. 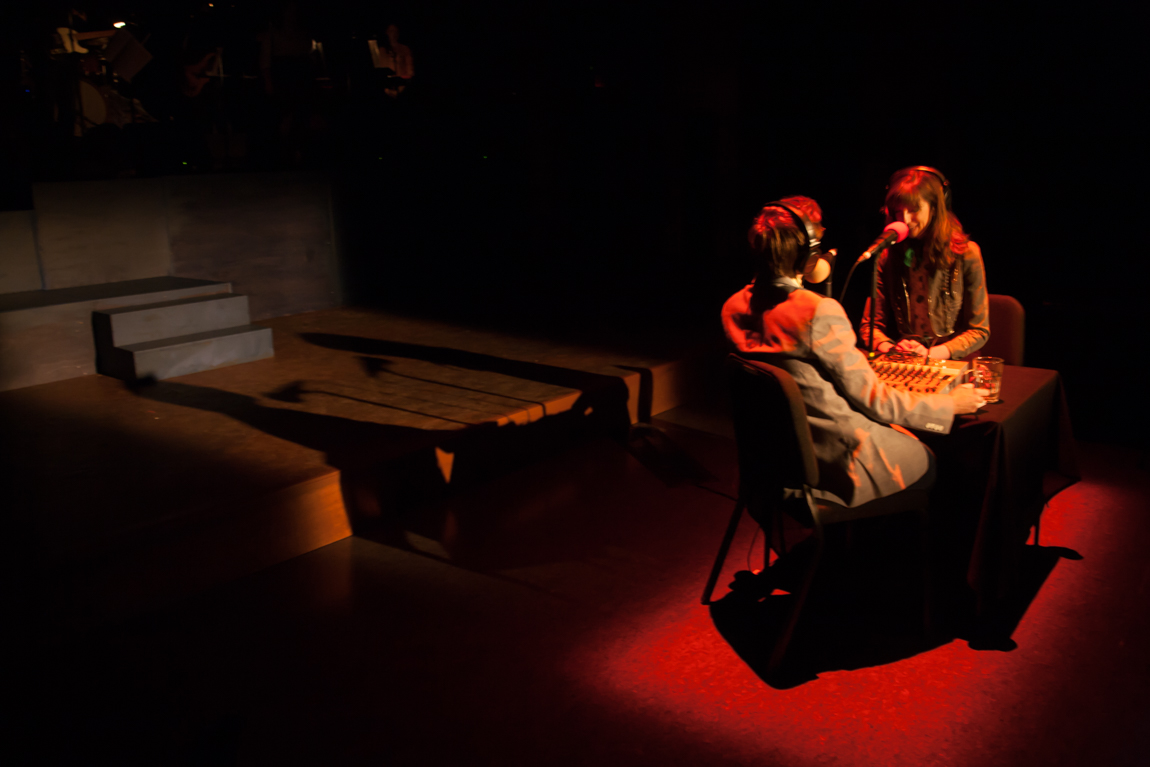 And it’s not every day that Masters’ research would culminate in a musical. But droll theatricality and intricate musical scores are keystones in Adler’s practice, where a live band – fronted by Adler and her accordion – merge a lush, neo-folk sound with witty wordplay. For Marcuse, the poet represents “the first self-conscious artist, in whom artistic necessity stresses a life of wandering”; so with her familiar blend of song and spoken word now imbued with the spirit of tramping, Adler embodies the errant poet par excellence. Klasika could very well be read as a Künstlerroman in its own right. 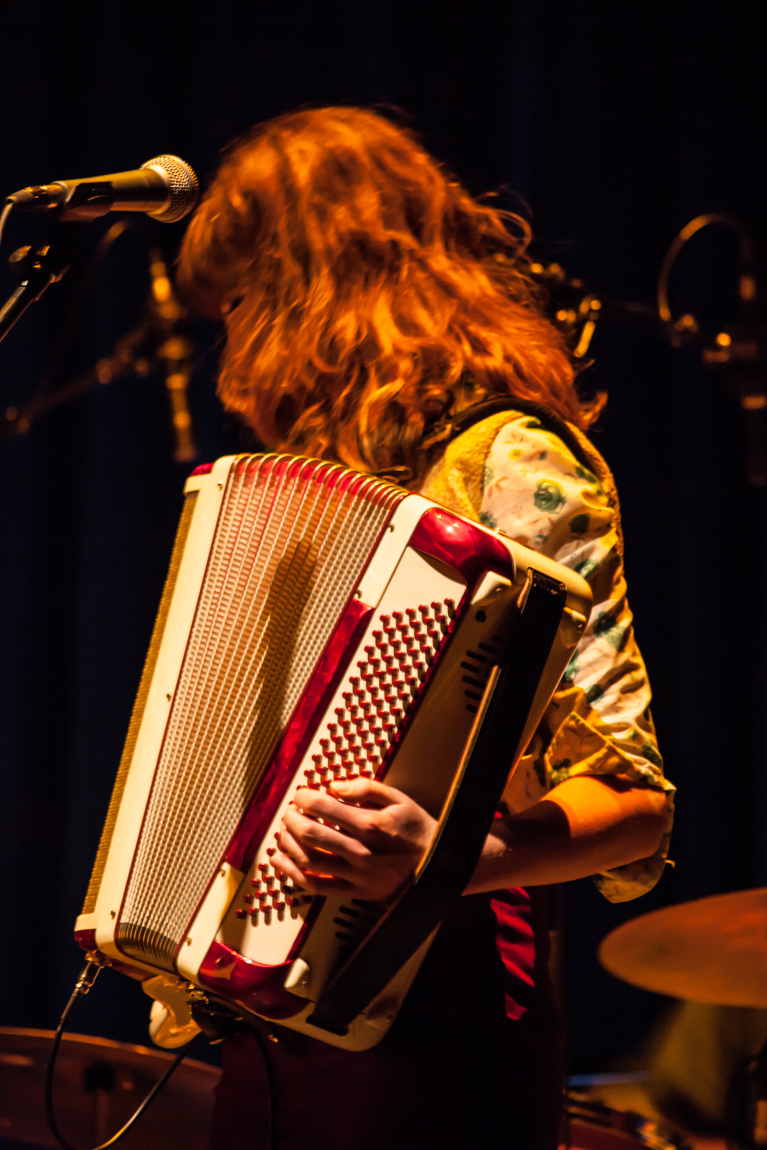 The musical follows the fictional character ‘Bára’, portrayed by Megan Stewart and based on Adler herself, as she sets out on a tramping excursion across the Czech Republic. As her voyage unfolds, her path criss-crosses with other characters whose realities are infused with fictions – aspirations and alter egos that enrich their daily lives. Barb the Boot Fitter, who fits Bára with her first pair of cowboy boots, was once a stuffy West Vancouverite who reinvented herself as Queen of the Cloverdale Rodeo. The withdrawn filmmaker Honza longs for stardom, imagining himself being interviewed even as he interviews the tramps for a documentary film. Here, Adler cleverly weaves together a number of narratives, all of which integrate the romanticised Wild West into a range of contexts – some spanning continents, others rooted in local, Canadian culture. 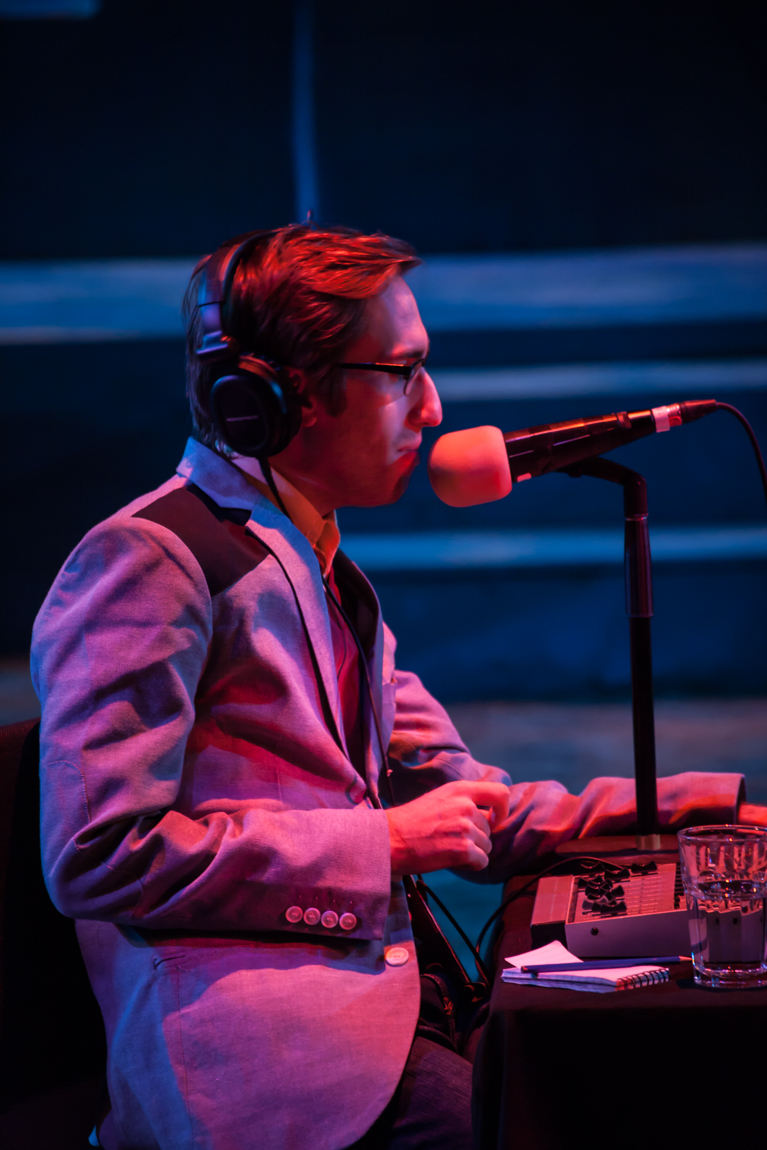 Bára sees tramping as a departure, a “one-way river” that conveys the traveler to a different vantage. It’s reminiscent of how the Bohemian artist in the Künstlerroman runs against the flow of society, seeking an alternative truth not defined by hegemony. In one brief but brilliant moment in the musical, Adler accentuates the semantic similarity of recreation and re-creation, alluding to how tramps invigorate their realities by re-imagining the world as wilderness. It’s important to note, nevertheless, that Adler focuses not on themes of escapism and retreat, but rather friendship and community; Bára’s aim is to discover the sound that people make the moment before they put their arms around each other’s shoulders and burst into song.

Stewart’s performance is commendable, as her character matures from something of an ingénue city girl to a committed tramp, her bright red cowboy boots begging a slight Hollywood comparison to The Wizard of Oz alongside the clear homages to the Western genre. Ashley Aron is a standout as Barb, beginning with a soft solo as she encourages Bára to break into her boots before revealing her own inner diva: the saucy rodeo queen whose surprisingly poignant story of community – and female bonding within the chauvinistic world of cowboys – unfolds parallel to Bára’s. Unlike these characters, there is always a degree of separation between Honza and his environment; he reconstructs the outdoors through layered sound recordings, providing a compelling antithesis to the explorers. Throughout the show, the music ranges impressively: the lilting ode to rhinestones, sung by an all-female ensemble with an accompanying double bass, is a highlight, not only for its harmonies but also for the thematic poetries of how these valueless diamond simulants are nevertheless luminous – and sparkle all the more when they’re together. 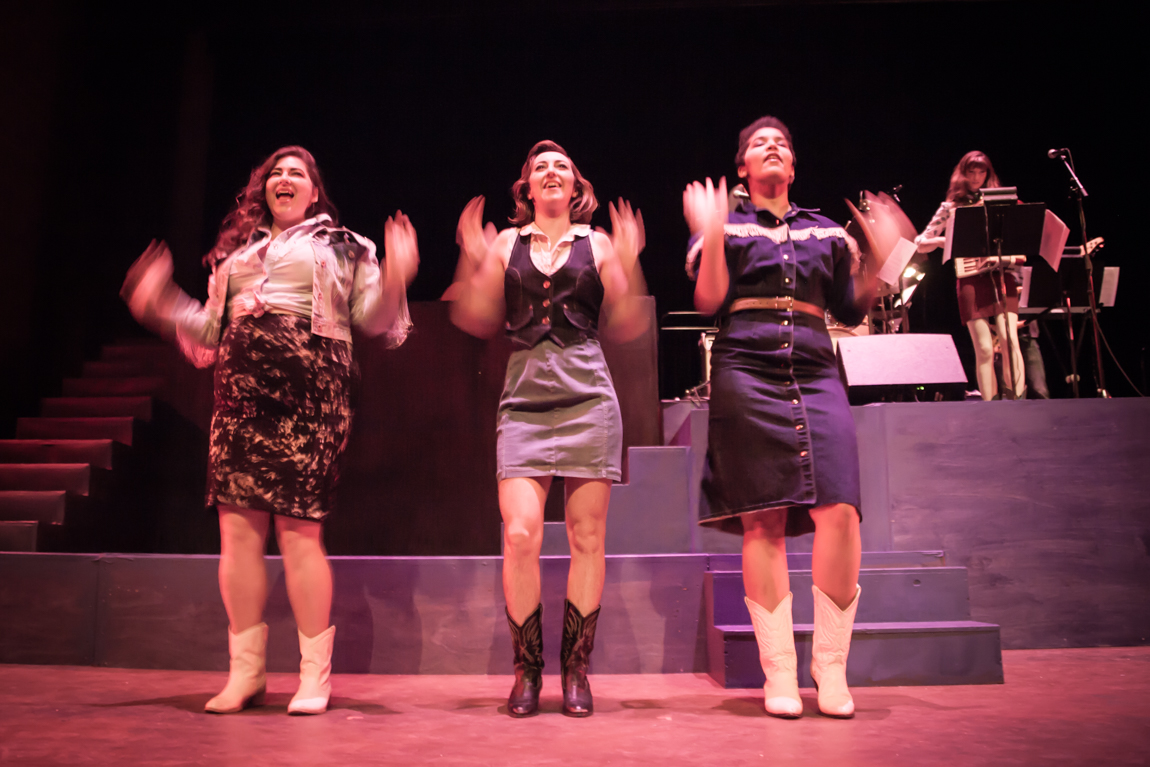 The set of Klasika is notably spare; a multi-tiered stage provides the primary backdrop, with the live band onstage throughout the musical. Even so, the seamless lighting design of director and designer Kyla Gardiner imbues the musical with a cinematic quality, and audience members are welcome to view the show from tables and chairs set out on an open floor; the whole area is converted into a dance floor afterward. 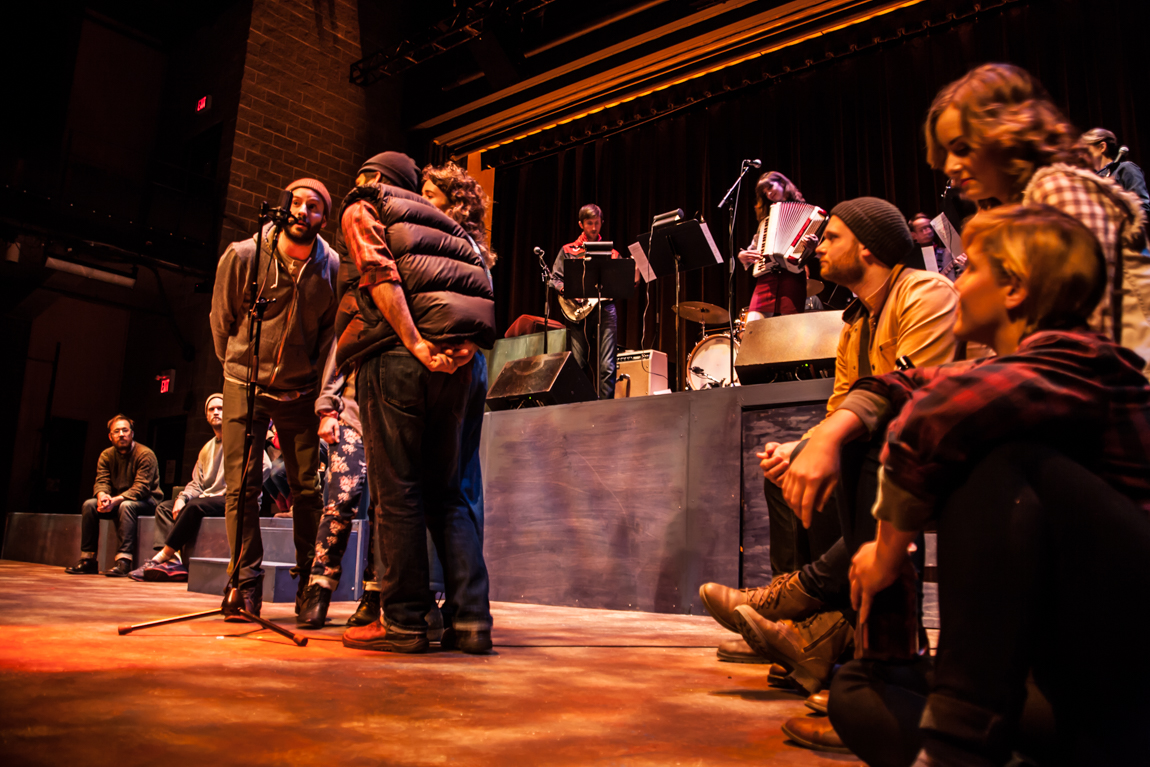 In conclusion: we might find echoes of the wayward artist resounding in Marcuse’s seminal work One Dimensional Man, a critique of both present-day capitalism and Soviet Communism, wherein he posits ‘negative thinking’ as a dialectical solution to positivism. Maybe, then, it’s not reaching too far to suggest that a similar left-wing politics of emancipation underscores the quest of tramps, whose fantasies counteract the political regimes that have successively oppressed the Czech people over the past century. And we can extend this thinking through Klasika, where a communitarian spirit and zest for wonder begs us to consider how we might exist more creatively, curiously, and compassionately within society.