Blisters are the way the leather says ‘I love you’

Letters to my cowboy boots 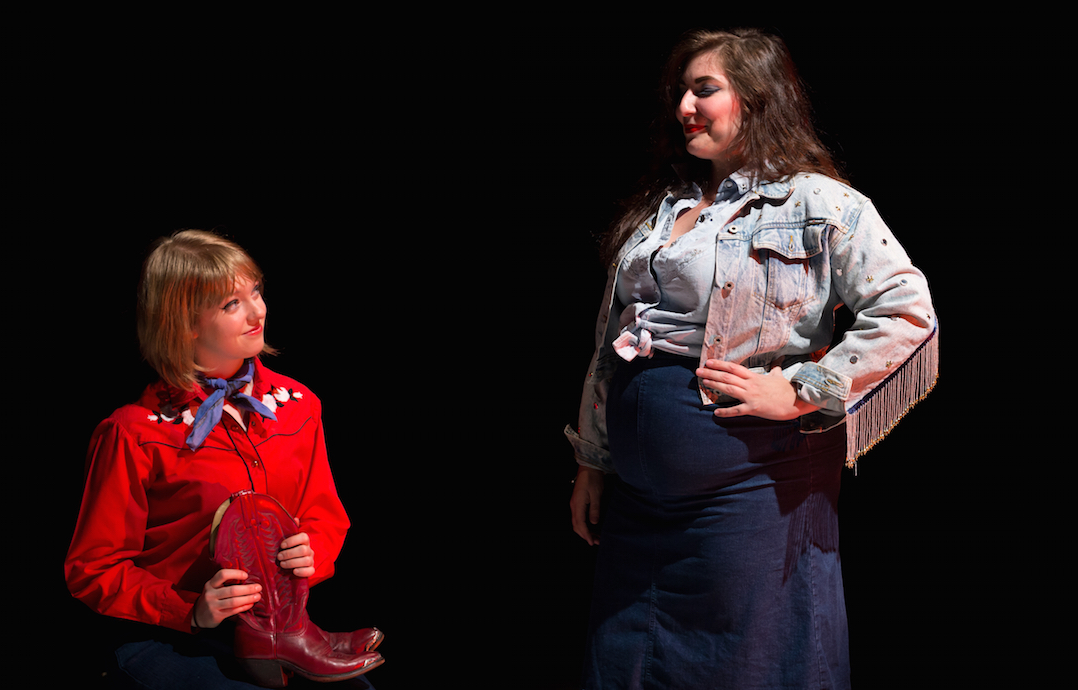 I see you standing there, right by the door. Waiting patiently for the rain to pass, so we can go stomping through town again, bandana and cowboy hat in tow.

We haven’t spent a fall together in a few years. Moving to new places called for pared down wardrobes, leading me to choose plaid shirts over heavy boots, and so I left you in the closet of my East Coast home. Now we’re reunited, and for good reason. I’m introducing you to the theatre. I’m gonna be a star…or, uh…a tramp. And you’re coming with me.

We’re going to be in a musical together – Klasika, by my friend and MFA colleague Barbara Adler. This fall there’s so much more to look forward to besides trudging through leaves and racing to class. There will be musical numbers, bedazzled denim, maybe even some sheep. Get your hopes up.

When I found out I was going to be a main character in Klasika I was given a red bandana and was told to take stock of my Western-themed clothing. There was an early initiation – an exploratory vandr along Vancouver’s seawall – which required cowboy duds. I had the leather jacket with tassels, I had denim and gingham, but my boots were fake. Cheap suede imitations inherited from a friend…comfy, but barely appropriate. I thought of you, boots, collecting dust in a closet on PEI, and so I got on a plane and flew east to rescue you. What follows is a short scrapbook of our time together:

Sometime in 2007, we met. It was in a Value Village in Charlottetown. You were exactly my size and only $20. It was destiny. Through my undergrad years in Montreal we were inseparable – we danced, biked the city, walked for miles. I don’t remember the blisters, just the happy times.

Jump forward to July 2015. I’m in Charlottetown and I find you fallen over in the depths of my closet dry, dusty and pale. I pick you up and in that particular style of silent communication we have, we greet each other as old friends, reunited. Dear boots, it’s been a while. But now, you have a purpose. A good chunk of mink oil and a lot of elbow grease restored you to a soft caramel brown I’d never seen before. Perhaps my younger self didn’t see the need for boot polish, but oh, now I know the error of my past ways. 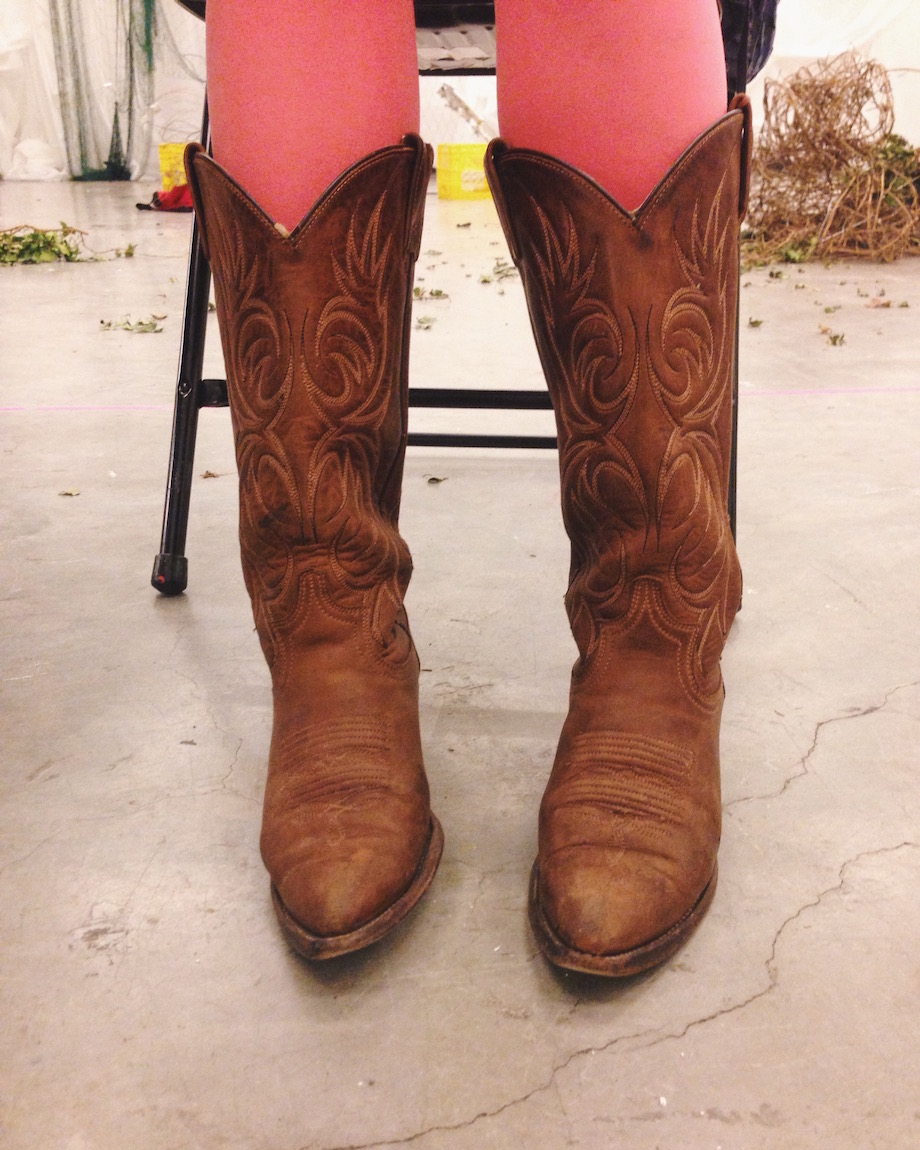 My boots in their very first Klasika rehearsal. In the background: not a tumbleweed.

Two nights later, we go out together for the first time in years. We danced like fools. Nobody noticed you, or at least no one commented, except my ankles, who wept. At 2am, on my way out of the bar, I stepped in puke. Sorry.

A few days after that, my ankle blisters scabbing over, I packed you in my suitcase and we headed West. I showed you around Vancouver during the few days of cool weather. 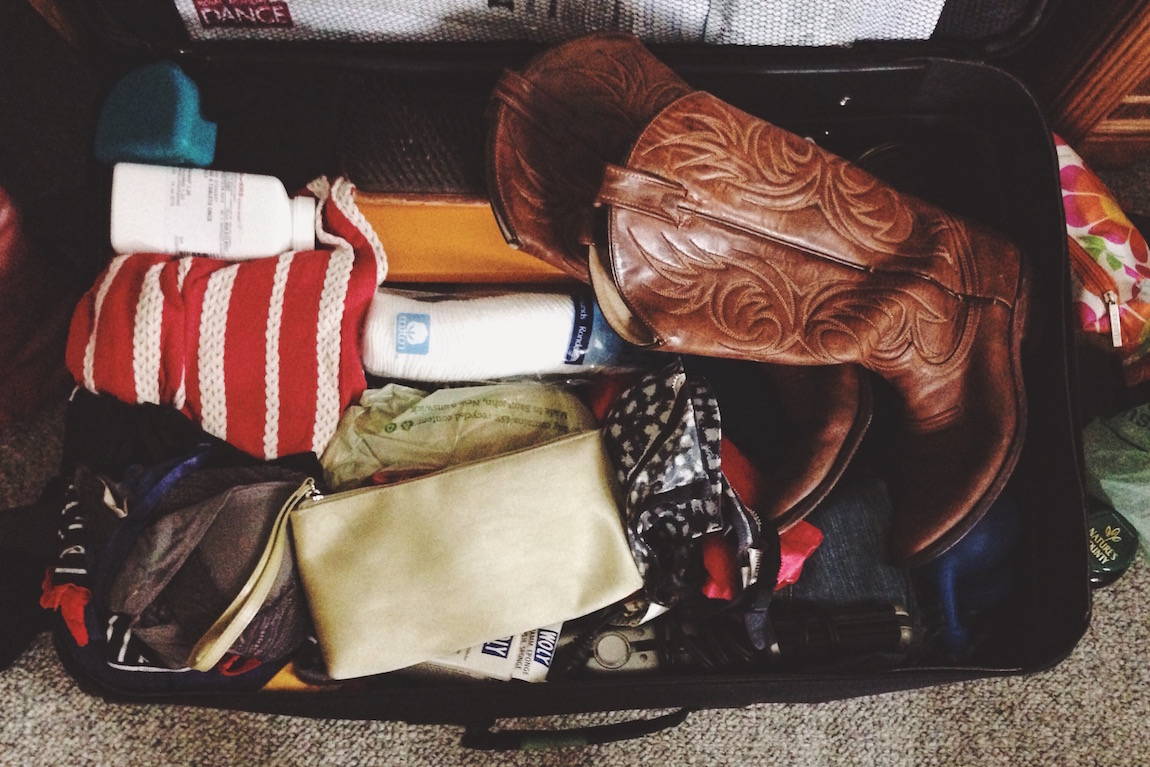 Packing before heading out West

Soon enough, it’s August. After Keely O’Brien bedazzled her cowboy boots for my show The Builders (which, independent of Klasika, had a cowboy streak running through it) and shuffle-stepped around the studio, I was inspired to wear you to our Builders rehearsal. I felt my directorial stance sharpening. Was that your doing? 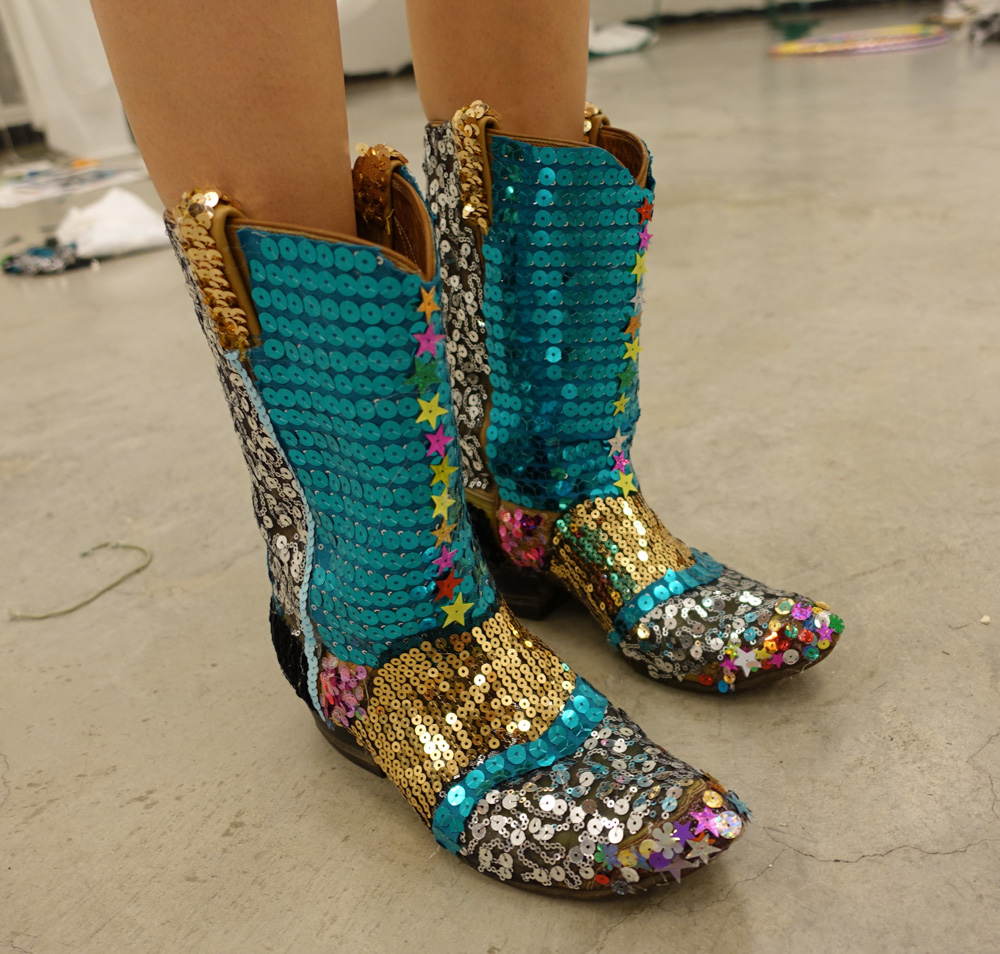 Then came Field Camp, on August 22, certainly our best adventure of the summer. There were special instructions – to meet at Alexander Studios, in cowboy gear, ready for a vandr to Pandora Park with three panels of freshly sodded grass. There was a warning too – sensible shoes – which I purposefully ignored. This was our long-awaited opportunity to vandr, and I was not about to choose practicality over authenticity. 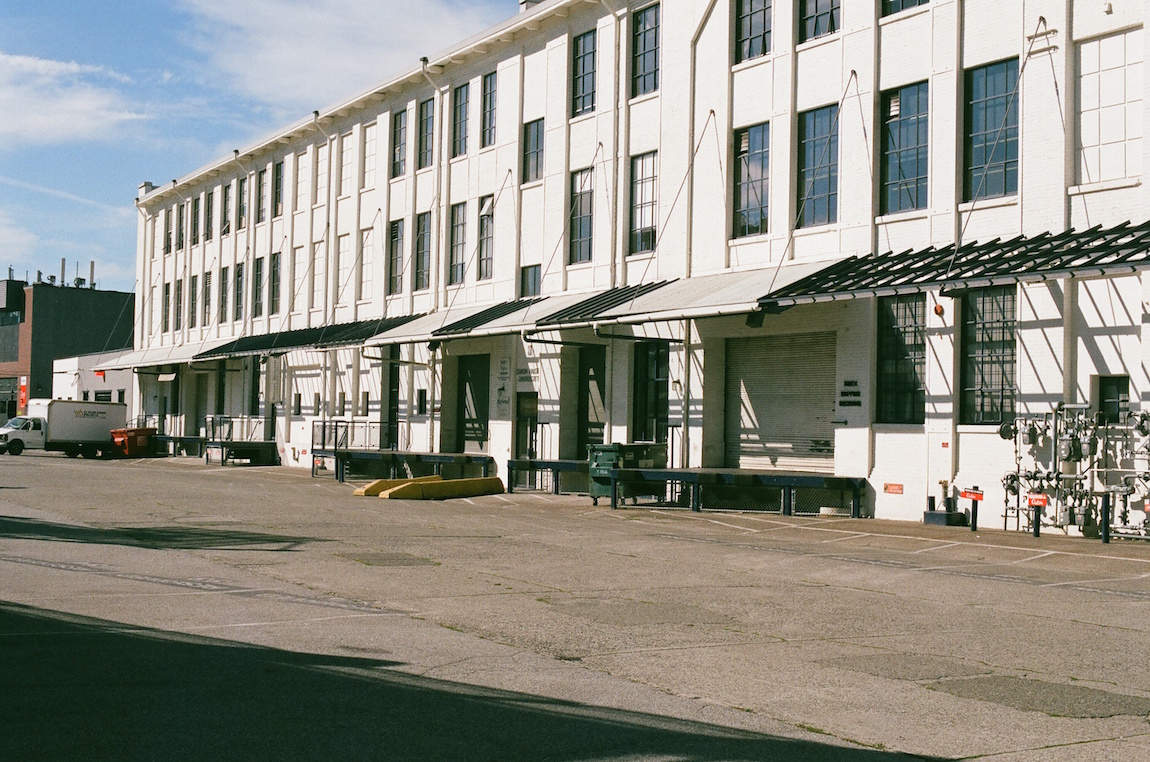 The meeting place for the vandr 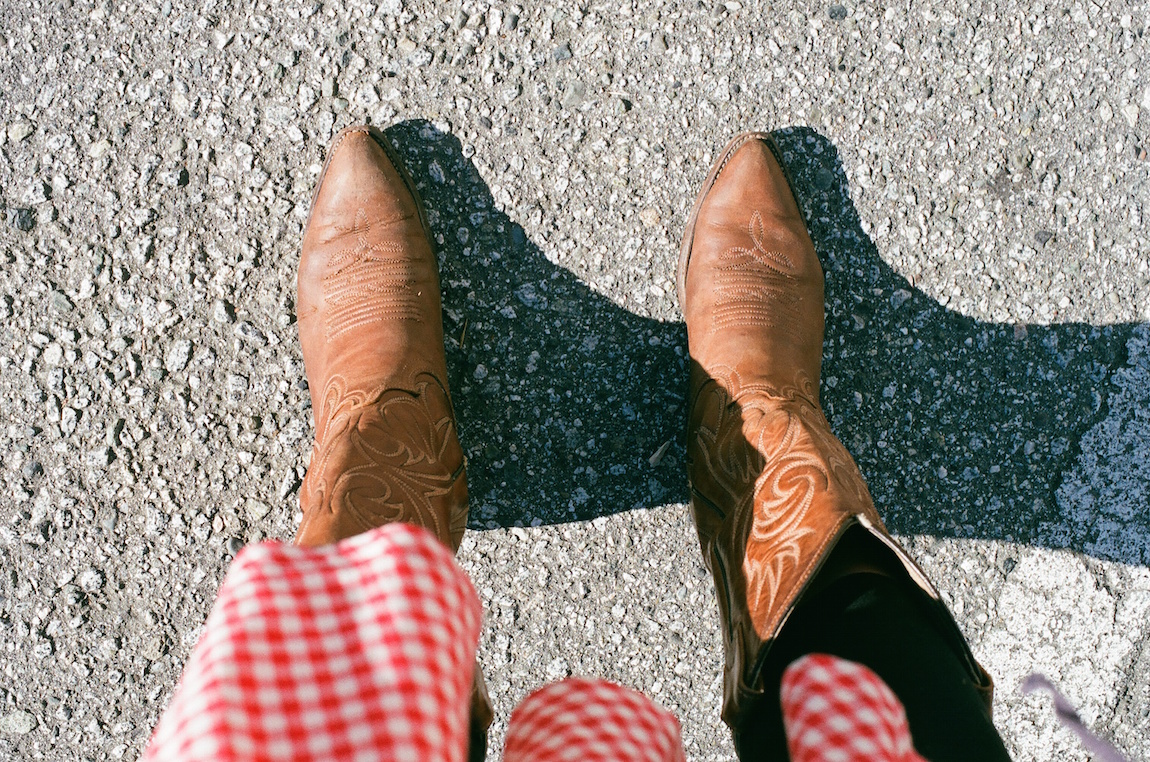 My fellow vandr-ers and I convened at the studios, strapped the largest grass panel to a canvas stretcher and hung the other two from a 2×4, and then set out on our way. Six vaguely Western weirdos, vandring east with lush grass blankets on a gorgeous summer day. (Did we anticipate all the pot jokes we would hear along the way? Not quite.) We walked, past industrial outposts and demolition sites and the sugar factory that coated the air with the smell of molasses. I kept waiting for the pain – for blisters and aches and blood. But it never arrived. Not after the vandr, or the Field Camp Klasik (which had me galloping around the park doing my best horse impression), or even the walk home the next morning, after we all slept under the stars. 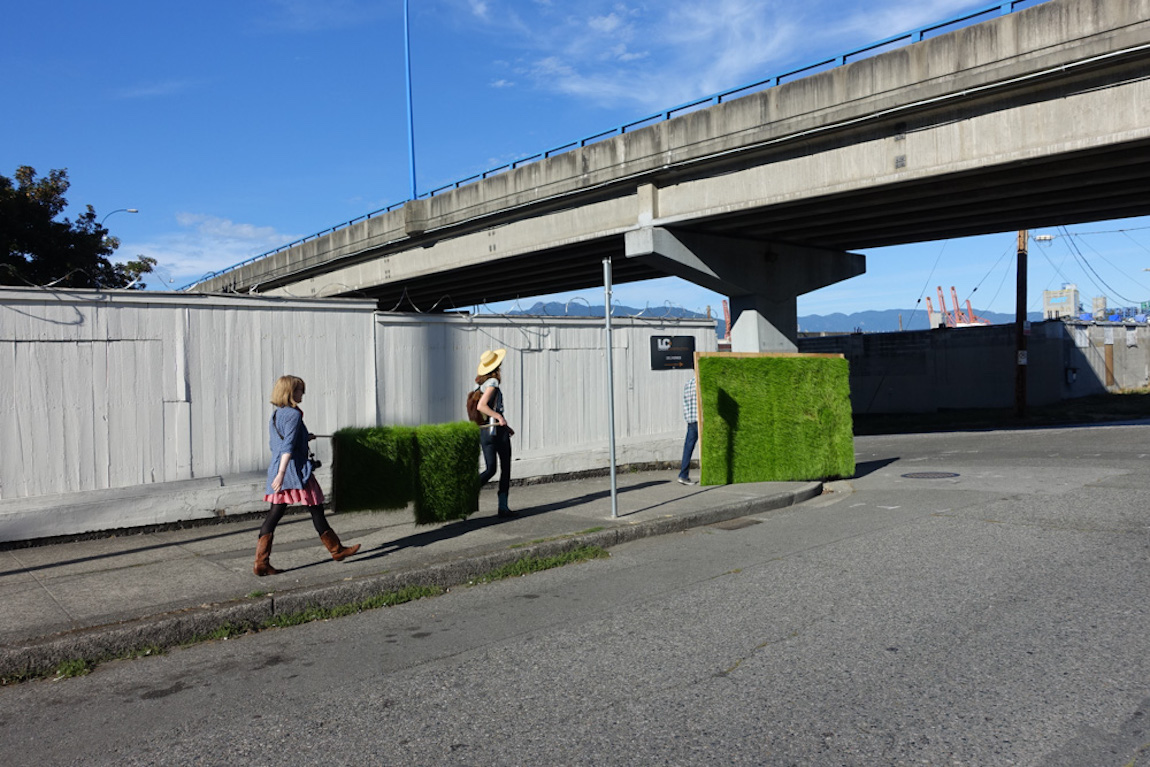 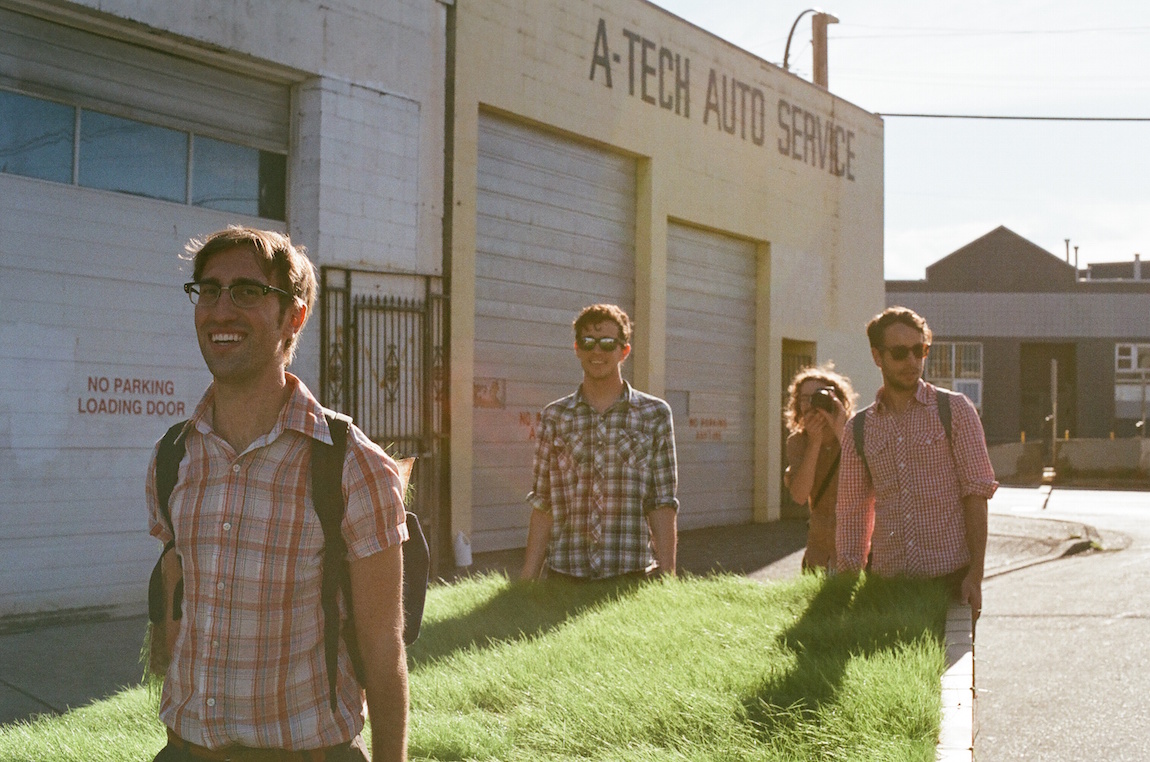 Since then, you’ve accompanied me to Klasika rehearsals, the Amerika screening, and plenty of other places. You’ve tied all my cowboy-inspired outfits together, worn proudly as both promotion and preparation for this upcoming adventure. You’ve helped me stand my ground in the face of comments such as “Is that your Halloween costume?” and “Nice horsie outfit.” And when the woman on Cordova street wearing the cowboy hat with a guitar slung over her shoulder caught my eye, pointed at me and said, “this…this is great,” that brief moment of mutual recognition and appreciation made it all worthwhile.

Now boots, you may or may not have seen this: 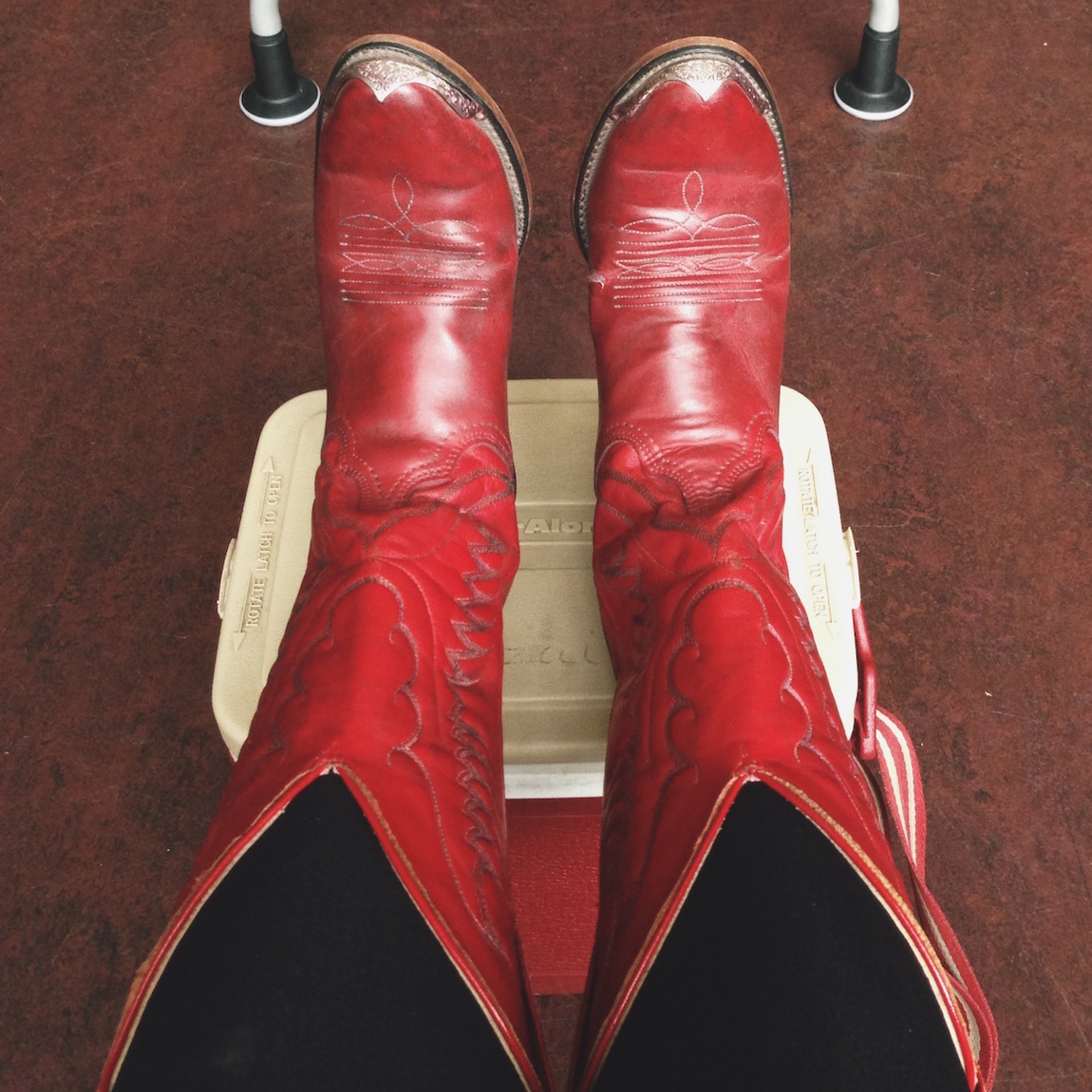 Dear boots. Please know this: I have not replaced you. Yes, I did spend yesterday in a four-hour rehearsal with a saucy pair of red leather cowboy boots clinging to my feet. But it was character work! We had to get to know each other…cause these boots are also in the show with me.  Don’t take this to mean your part is cut! It’s more like you are sharing the role because I couldn’t bear the thought of allowing you to be painted red.

And, I’ll be honest – at the end of the day, my feet ached. I know you would never do that to me.