Part of the build-up to Klasika, a multidisciplinary musical premiering Oct.29\30, 2015 at the Fei and Milton Wong Experimental Theatre

I can’t remember at what point during the three-hour, fourteen kilometer trek between SFU’s Woodwards and Burnaby campuses we realized Hastings Street was a place that neither of us particularly wanted to be. Yet, somehow, two weeks later, there was nothing we wanted more than to do the walk again. So we did. Even though we started a bit later and were a little less prepared, the second walk was pretty similar to the first. We passed all the same strip malls and dollar stores, panted our way up all the same hills, and tried to chatter ourselves away from our disappointing surroundings the same way we had two weeks before. Hastings Street got no more interesting, and all the landmarks we’d remembered from the first walk were unchanged, except for one. 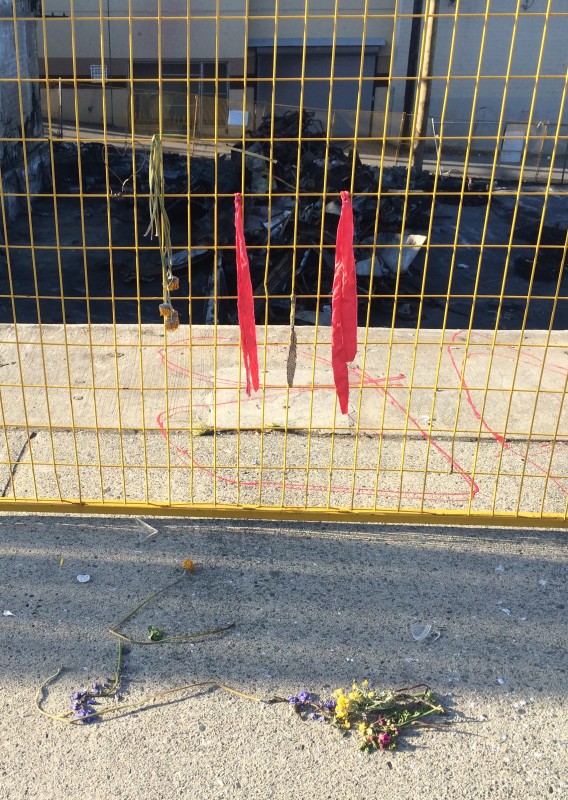 On the west end of the bridge between Glen Drive and Campbell Avenue, on a temporary fence around a burned out warehouse, a small collection of flowers, ribbons and feathers had replaced a poster we’d seen at the same location during the previous walk. The poster seemed to be commemorating the death of a family of five, and resembled the sort of temporary memorials often found at the sites of car crashes and similar accidents. Given its placement in front of a destroyed building along a busy thoroughfare, it was hard to tell exactly how the family had passed, and if all five people had died or only a few. In fact, aside from its similarities to a typical roadside memorial, there was nothing on the poster that clearly indicated anyone had died at all. When we returned to the site on the second walk, the few remaining flowers and ribbons were even more ambiguous, and for all we knew may have been completely unrelated. Still, the fact that anyone had committed themselves to decorating a temporary fence on an ugly street in front of a pile of burned wreckage was no less confounding, or heartbreaking.

To give a bit of context, we were doing the walk for SFU Galleries’ Through a Window: Visual Art and SFU 1965-2015 exhibition. The “we” in question was myself and Barbara Adler, and the call from the gallery had been for sound works and compositions acknowledging Hastings Street as a connective corridor between SFU and the city.

Barbara and I had only just started working together regularly when she forwarded me the call. When I said, “ok maybe this is a bit much and a bad idea… but one way we could collect material is by actually walking from Woodwards to Burnaby,” she was immediately enthusiastic. Barbara also mentioned that we could fold the walk into the ongoing vandrs she’d been organizing in preparation for her multidisciplinary musical theatre project, Klasika. When we set a date for the walk, I had very little idea what either of these things were. As I write this article, I’ve since been cast in the project as Honza, a character based on a filmmaker Barbara met during her travels in the Czech republic. Given my background as a sound artist, Honza has been slightly reconfigured as an audio documentarian for the upcoming production. When she offered me the role, Barbara also asked if I would be interested in writing about our walk as part of the series she’s been doing with Vandocument…which brings us just about up to date. 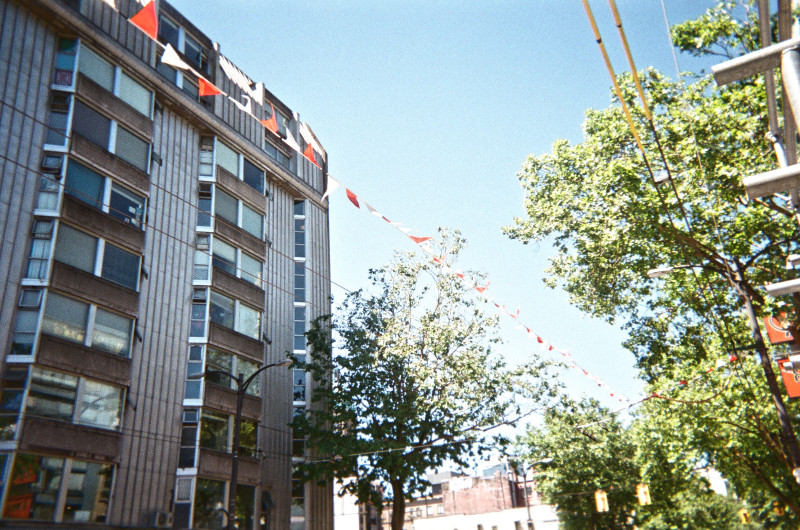 In the article preceding this one, Barbara describes vandr’s as typically involving “a group of friends taking a recreational jaunt into the countryside,” and wonders if performing this outdoor activity in an urban environment enables a transformation of the city through imagination. No doubt we had the desire to transform the spaces we encountered on our walk. We brought along a pair of small field recorders with the intention of capturing audio, both of the environment, and of us talking about our surroundings. Barely a block away from the front door of SFU Woodward’s, I launched myself into a long-winded boast about my bush league success in a boy scout gymkhana. As we walked, efforts at talking about Hastings Street became more and more strained, and were increasingly replaced with fond remembrances of other walks. In the end, we mostly talked about the walks we’d have preferred to do instead. We had dressed ourselves for a hike through trees in the shade, but were sweating from the heat of direct sun on asphalt. 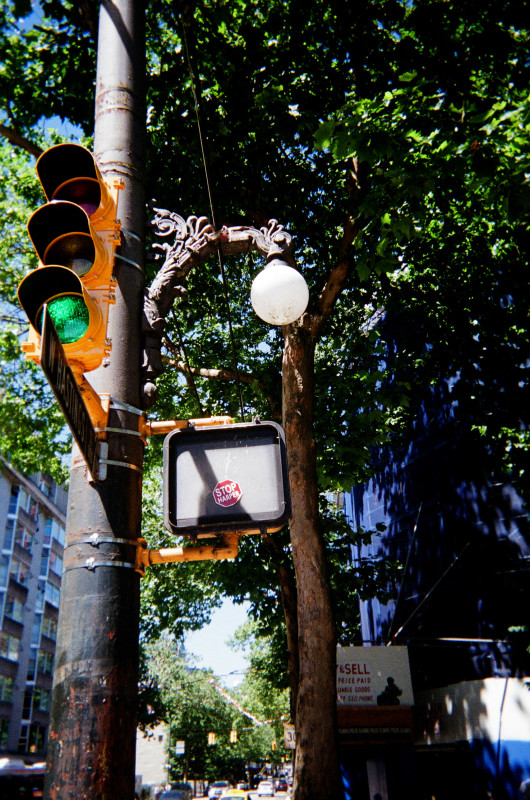 When we sat down to parse the audio afterwards, we realized that as we’d continued to talk ourselves further and further off Hastings street, we had become more and more negligent of careful audio collection. In over three hours of content we could barely find a minute of usable material, so we scrapped the files and decided instead to record ourselves talking through the experience of the walk. It was a strange sort of exercise, attempting to go back to somewhere we had spent an entire day trying not to be. We went back through the street fair between Main and Carrall, the constant refrain of strip malls, the small memorial in front of the ruins of a burned out building. Once we’d talked our way up Burnaby mountain we organized the audio, and the next day began putting it together for our submission.

It was an unbearably beautiful day in early May, and as rain was still a rather frequent occurrence, it didn’t take long before we were itching to be outside instead of bottled up in the studio. “It’s weird,” I said, as we slogged through recordings of ourselves talking about being on a walk we’d wished had been somewhere else, “the more we listen to all of this, the more I just want to do the walk again”.

The next thing I knew we were stepping out the door of Woodward’s headed for Burnaby Mountain. Wary of our previous ineptitude, and with a better idea of what to expect and what we were looking for, we were more careful and considered with the audio we collected. We spoke less, listened more, and when we were done, put it all into a four-minute audio collage/musique concrete composition called ‘Strange Memorial’. The title is a reference to a line spoken about the poster in front of the burned out warehouse, and when I think about the persistence of whoever it was that decorated the site, about my and Barbara’s constant doublings back as we talked about where we did and didn’t want to be, about the utopian ideal of the urban vandr, the title seems to me to become more and more appropriate. In each case something remembered was trying to be revived in places from which it had been taken away or never was at all. In each case we attempted to use an imaginative act to transform the world around us. 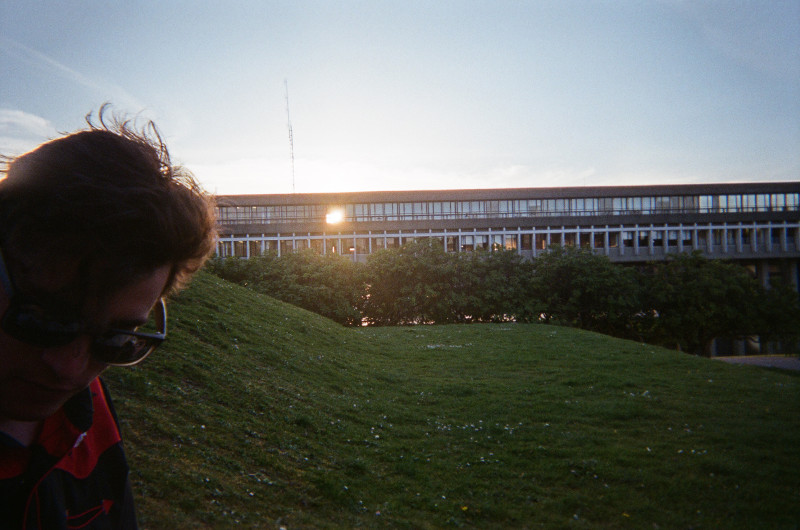