A kinetic response to Emily Carr at the Vancouver Art Gallery 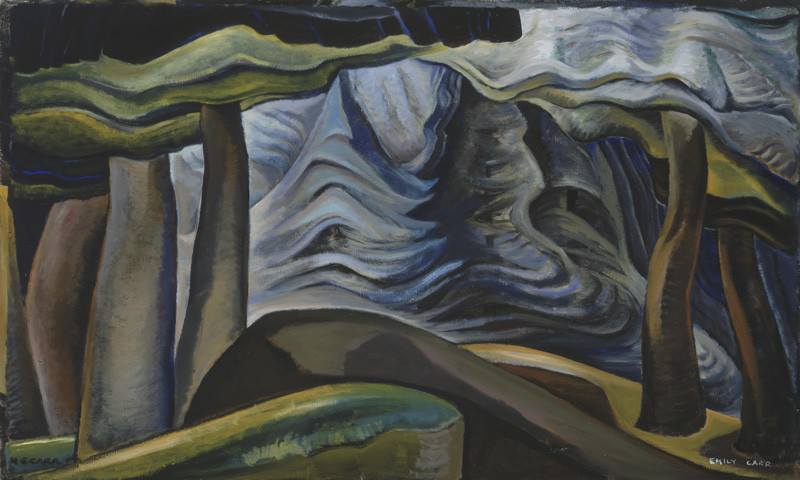 The legacy of Emily Carr and her celebrated cadre of fellow artists that comprised The Group of Seven has been deeply felt within art institutions in Canada for decades. The group’s canonized output of abstract portrayals of the Canadian environment has inspired countless entries in art history books which discuss the relationship between Canada’s natural landscape and national identity as expressed through fine art production. While discussion of Emily Carr’s emblematic oil paintings are widely discussed formally within art discourse, the social and political dimensions of her work beg further questioning.

In the exhibition Beyond the Trees currently on view at the Vancouver Art Gallery assistant curator, Diana Freundl and guest curator Caitlin Jones ambitiously attempt to contribute a fresh perspective on Carr’s oeuvre through the pairing of a selection of the artist’s traditional landscapes with two new media art installations by the Vancouver-based collective WALLPAPERS (Nicolas Sassoon, Sara Ludy and Sylvain Sailly). The vibrant digital graphics by WALLPAPERS compliment Carr’s modernist landscapes, aesthetically enlivening an otherwise fatigued bastion of the Vancouver Art Gallery’s collection. The aesthetically arresting nature of WALLPAPERS’ works however miss an opportunity to explore contemporary critiques currently lodged at the Canadian darling. Beyond the Trees is the fifth in an ongoing series presented by the VAG that situate exhibitions in dialogue with Emily Carr’s paintings and works on paper. The exhibition is also a part of the 21st International Symposium of Electronic Art (ISEA). 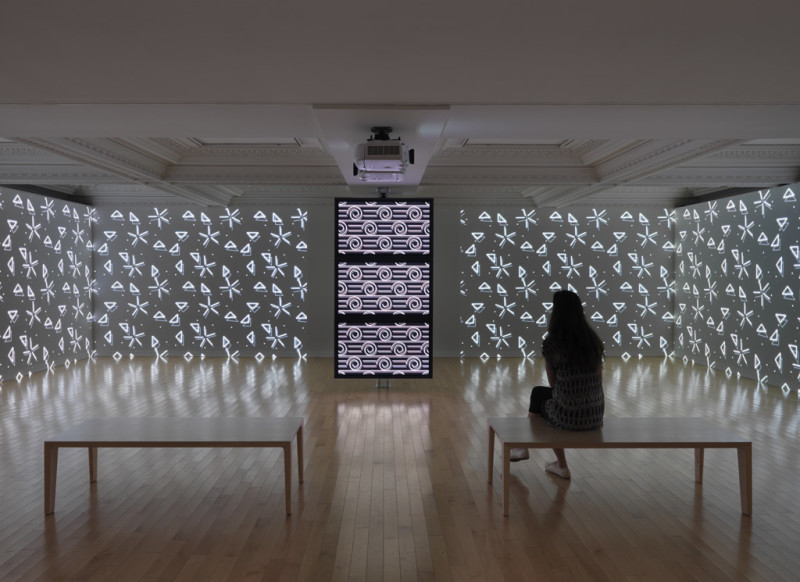 Works by both WALLPAPERS and Carr, whether the hypnotic digital patterns of the former or the abstract renderings of the latter, offer a unique visual interpretation of Vancouver’s coastal landscape, a source of pride for the province and a subject at risk of complete exhaustion. The connections between WALLPAPERS’ landscapes and those of Carr vary in propinquity. The key element that links the two is a moodiness that runs throughout. Vancouver, flanked by mountains and ocean, is a place that invokes a conflicting sense of vastness and insulation – a sentiment that both WALLPAPERS and Carr articulate through their works.

In the first gallery dedicated to the collective’s work computer-generated animations (.gifs) are projected against the gallery’s three massive walls and are also displayed on two columns, each composed of five monitors stacked on top of each other. There are 15 works in total in Room 1 that run on a loop. Typically, works by the WALLPAPERS collective are exhibited online at w-a-l-l-p-a-p-e-r-s.net where each artist designs original, digital wallpaper, which is then assigned its own URL. Their works have also been featured at Vancouver’s New Forms Festival, where in 2012 and 2014 the art group designed site-specific animations accompanied by various DJ performances. The exhibition of their work in a ‘bricks and mortar’ gallery space demonstrates an alternative mode in which this online collective exhibits. The extended duration of this iteration of their immersive projections allows for a more contemplative experience and reduces the occurrence of interruption by someone trying to use the digital imagery as a background for their latest selfie. The multiple monitors in Beyond The Trees also allows for the pairing of various “wallpapers” at one time by the different artists, an effect that is not possible on a standard computer screen or as a singular projection.

WALLPAPERS’ selection of projected images emerge from the primary shapes that comprise nature, at least according to the didactic information that accompanies the exhibition. The organic formations – abstracted trees, trunks, clouds, and mountains are pleasantly embellished with artificial colours – fuchsia, teal, violet, electric-blue, and neon yellow. The monumentality of the projections reflect the grand scale of the landscape to which the work responds, achieving an immersive environment within the black box gallery space. Nicolas Sassoon’s works, which include Islands (2015), Sound (2015), Summit (2015) and Mountains (2015) strikingly combine Vancouver’s distinct topology with an original digital aesthetic. Mountains (2015) for example features a gloomy West Coast mountainscape, with a subtly moving layer of white undulating specks reminiscent of an old cathode ray tube television display. Sassoon’s work is the most organic in appearance compared with works by Sara Ludy and Sylvain Sailly which are more synthetic in their use of form and colour. Sailly’s works riff on natural shapes, in the case of VC_3 (2015), one can detect the shape of the top of a flower top, missing its centre, and spinning listlessly. The baby yellow background cements the projection’s comforting quality. The same can be said of AC_11 (2015) and CP_3 (2015) which feature a graphic of a white plastic looking column, a vague approximation of a tree trunk. The fabricated objects centralized in Sailly’s animations prompt consideration of the binary between the natural and the industrial.

Carr’s painting style is recognized for its attention to line, shape, and colour, again the basic formations that comprised her main source of inspiration – the British Columbian wilderness. 28 of her works are hung salon style on one wall of a large gallery, that marks the first room of the exhibition, initiating the dialogue between the two sets of works. With titles like, Deep Forest (1931), Deep Woods (1938-1939), Formalized Trees (1931), and A Rushing Sea of Undergrowth (1935) it’s clear Carr had a deep connection to the West Coast, often underpinned by an air of the sublime. 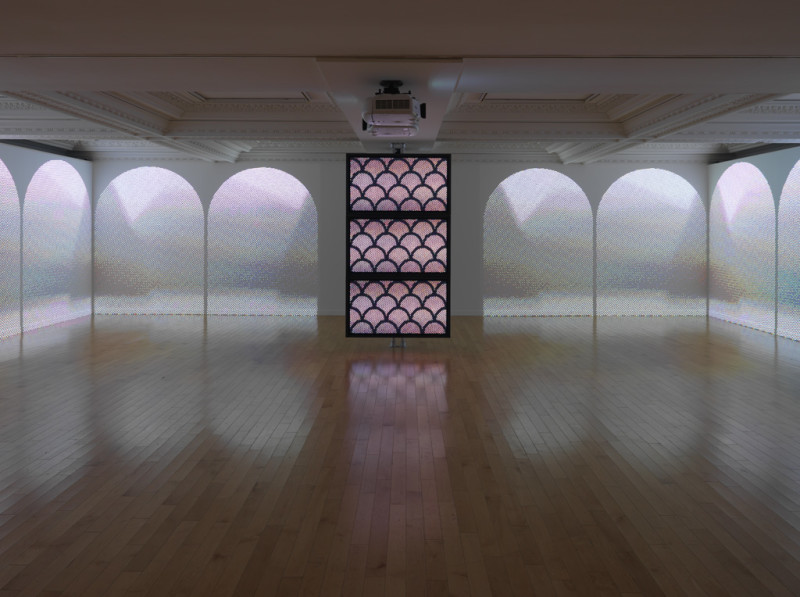 In the third gallery that makes up the exhibition the difference between Nicolas Sassoon, Sara Ludy, and Sylvain Sailly’s aesthetics are most striking and the projections respond more directly to the museum’s architecture. Digital images are projected within digital frames in Sassoon’s Islands and Arches (2015), which repeat the look of the gallery’s stylized ceiling. Ludy’s toxic cloud shapes are featured more predominantly in this room, morphing into figures that look bacterial. They are both meditative and threatening as they swell and heave with no identifiable pattern. Ludy’s works are also surrounded by digital frames adding a classical sophistication to her contemporary digital pictures.  The curlicues and triangle shapes that makeup Sailly’s BRECHRIOc (2015) and DIATOM1a (2015) offer some levity in an otherwise heavy series of projections. 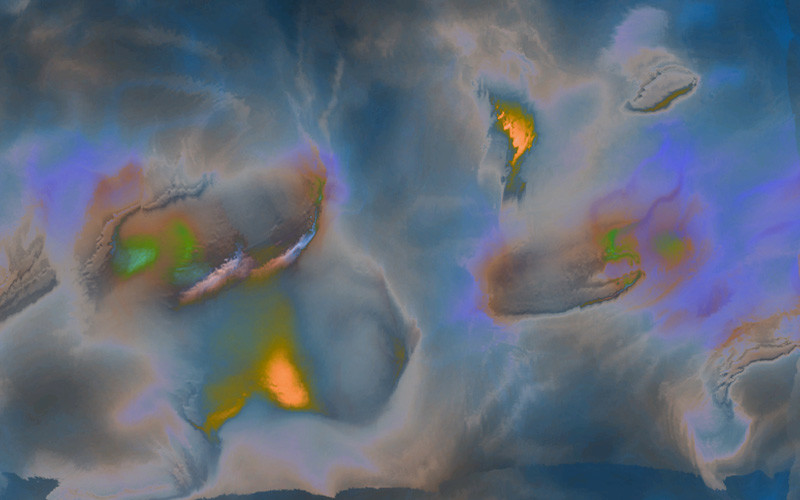 Landscape art is somewhat of a national art in Canada to the pleasure of traditionalists and the chagrin of art students the nation over. It has long been felt that Canada’s cultural identity is inextricably tied to the country’s geographic composition and physical climate. Finding new ways of expressing this connection is central to its ongoing relevance. Part of this relevance is responding to changes as they occur. WALLPAPERS’ take on Carr’s paintings conveniently elide the true state of the British Columbian landscape, both environmental and social. An examination of Carr’s body of work is incomplete without the revelation that the natural environment that she ardently captured is becoming increasingly degraded. The wilderness that Carr portrayed no longer exists. 21st century readings of Carr are also critical of her non-representation or misrepresentation of First Nations’ peoples and imagery, intimating a dying or dead culture. A contemporary reflection on Carr demands an acknowledgment of current day reconciliation and the cultural appropriation in the arts that continues to undermine these efforts.

Like Us. Vancouver Art Book Fair Delivers Much More