A review of Feedback Series: Julia Dault at the CAG

May 12th marked the most recent in the Contemporary Art Gallery’s Feedback series, where cultural practitioners in Vancouver assemble to respond, using various creative tactics, to exhibitions currently on display at the gallery. An audience sheepishly emerged and settled into the gallery’s particularly cold surroundings. On this day, artist Mark DeLong, Unit/Pitt Manager, Brynn Mcnab, and 1080p record label founder, Richard MacFarlane offered their commentary on the work of Brooklyn-based artist Julia Dault in her exhibition Blame It On The Rain. 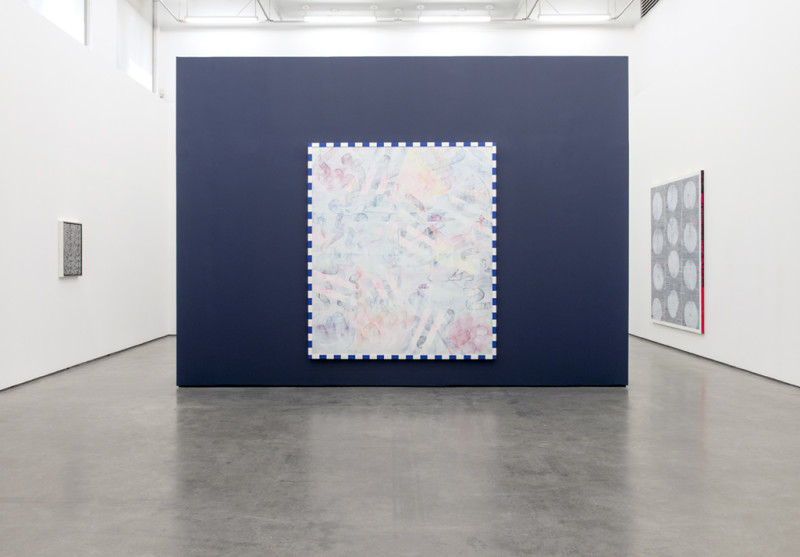 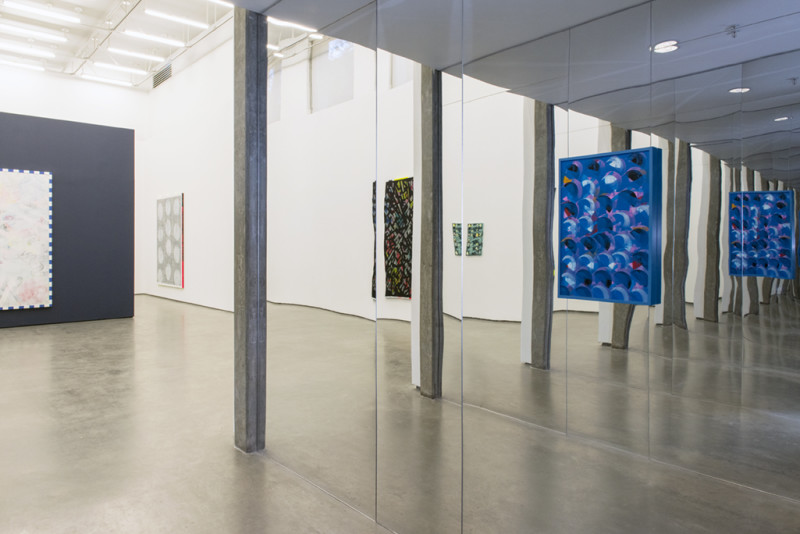 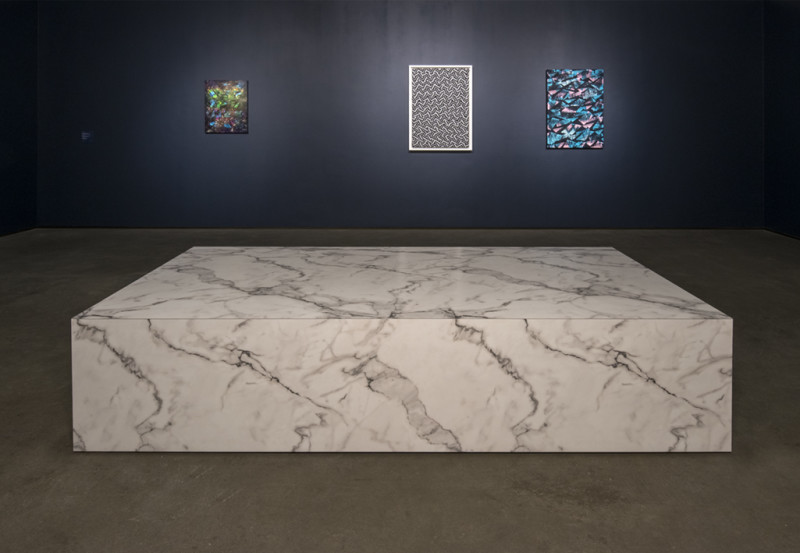 I had formed my own opinions about Dault’s abstract paintings and minimalist sculptures at the opening of her exhibition, Color Me Badd last year at Toronto’s Power Plant Gallery. I had found her collection of works aesthetically arresting but couldn’t access any depth, beneath the punchy colours and reflective surfaces that dominated. The engaging and unique readings of Dault’s artistic output by this Vancouver cadre certainly widened my considerations of her practice.

Following an introduction by the Contemporary Art Gallery’s Curator of Learning and Public Programs, Shaun Dacey and a few quick remarks from visitor assistant, Jaclyn Bruneau, the forum of close readings began. 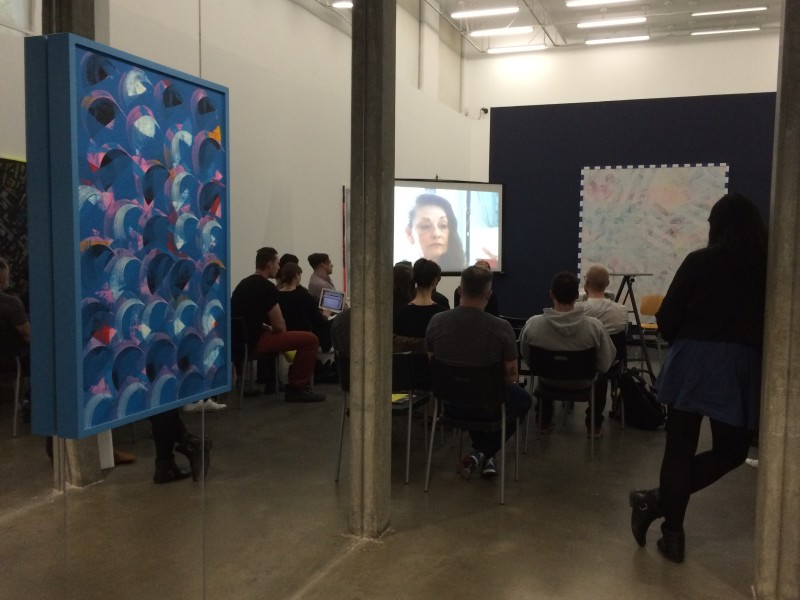 The first response came in the form of a short, looping video by Mark DeLong. With a cumbersome start (due to some slight technical challenges) the audience took on a tone of unease, as the experimental video portrait began. A dynamic lipsticked lady describes the qualities of a wine, the same elements that could be used to characterize a friend are recited between generous sips from her glass. Quick, jarring cuts, disrupt the senior women’s commentary – “aged yet still young at heart”. After looping 3 times the video it was determined by the organizers was over, this was followed by tentative applause from the audience. The correlation between Dault’s oeuvre and DeLong’s slightly bizarre video response was not immediately decipherable. When asked who the character in DeLong’s clip was, he simply responded, “A friend of a friend”. His submission remained somewhat mysterious and not wholly informative. 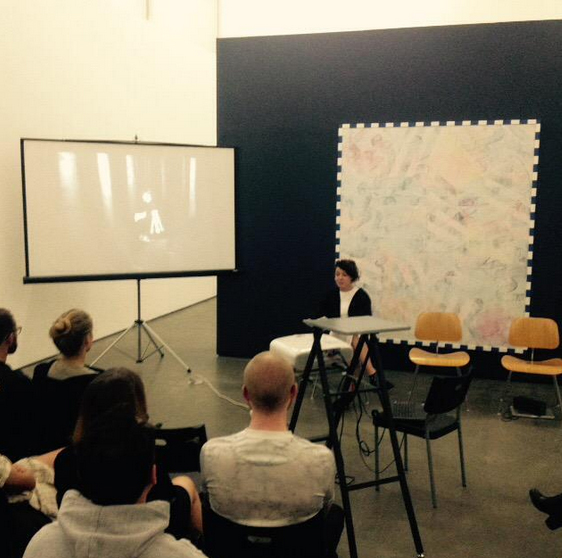 Brynn McNab’s musings about Dault’s exhibition were defined by an academicisim, made accessible through her sentimentality and thoughtfulness. In front of the backdrop of a silent film called “Le Revelateur”, directed by Philippe Garrell (1968) McNab contextualized Dault’s work in relation to the style that is zombie formalism, a designation coined by Walter Robinson in a 2014, Artspace article entitled “Flipping and the Rise of Zombie Formalism”. The classification relates to the resurrection of a style practiced by artists like Jackson Pollock and Frank Stella, denounced by writer Tom Wolfe, and sanctified by art critic Clement Greenberg. Dault’s aesthetic is identifiably similar to the formalist abstraction and minimalism of artists from the 50s and 60s. This resurgence is achieved almost too knowingly referencing canonized techniques in a way that removes them from their historical impetus and avant-gardism. Zombie formalism is considered the active practice of “emptying of past forms”. The zombie more generally is a signifier in culture wrought with associations, described by McNab as “humanity’s most basic nightmare”.

McNab also related Dault’s use of established art styles to the term skeuomorph, typically used to describe the recurrence of qualities of old technologies in newer ones. Posthumanist theorist Katherine Hayles first applied the term to a cosmetic design feature that though no longer functional harkens back to a technology that preceded it, allowing the new technology to be more comfortably integrated into a user’s life. In the case of Dault’s collection her artistic style is itself the skeuomorph, in her application of visual guidelines established by a previous art movement and reapplied in a new, contemporary context. 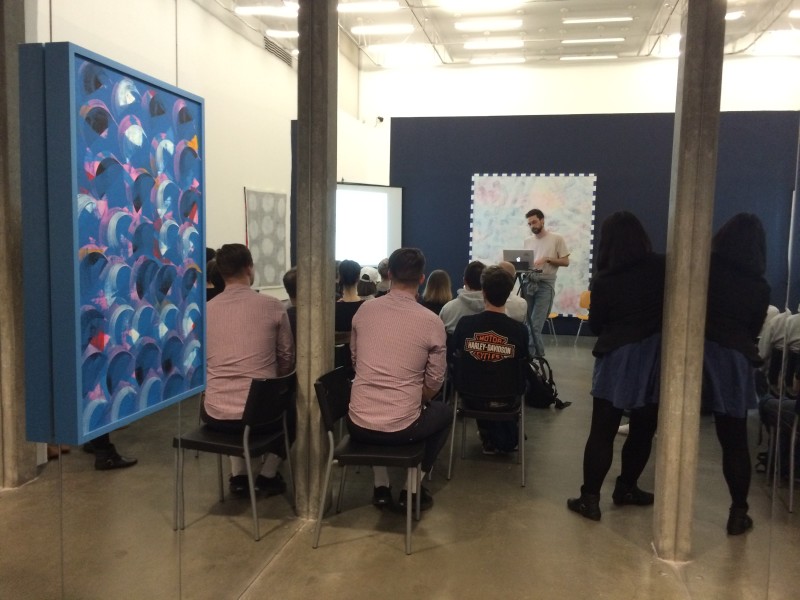 The final presentation was provided by 1080p founder, Richard MacFarlane, who offered a refreshing perspective informed by his position in the music industry. Armed with his own speaker, MacFarlane hand-picked songs largely from the 80s and 90s to share with the audience, that came to mind after viewing Dault’s exhibition. Born in 1977 Dault draws on some very specific yet familiar cultural trends visualizing what MacFarlane describes as a “generational consciousness”. Some of Dault’s titles are inspired by songs or bands from her youth. The name of her exhibition in Toronto (from which a few of the works that appear in the Vancouver exhibition were drawn) was “Color Me Badd”, itself a throwback to the R&B band of the same name, popular in the 90s and best known for their song, “I Wanna Sex You Up”. “Don’t Go Chasing Waterfalls”, offers little in the way of didactic information but remains a personal favourite in the Vancouver exhibition, referencing the song “Waterfalls” by TLC. “Blame It On The Rain” happens to be the title of a hit song by Milli Vanilli.

In MacFarlane’s account, Dault’s artistic vision reveals a post-ironic attitude, which is complicated by a nostalgia that can be epitomized perhaps by her use of a Twizzler as a painting device. Natural parallels exist between painting and music which perhaps explains the success of MacFarlane’s presentation. Both domains demonstrate a unique use of, layering, minimalism, nostalgia, appropriation and psychedelia. These associations were brought to bare in MacFarlane’s short clips of techno, house, ambient, and mash-up music which were played maybe too briefly to a crowd that seemed too reserved to enjoy his playful musical offerings.

When the floor was opened to the audience there was an uncomfortable silence, undermining the event’s self-understanding as promotional of inclusive conversation within a public forum. The lack of dialogue may have been due to the complexity of Dault’s abstract works or the dissimilarity of the presenter’s responses. It also didn’t serve the event that the presenters, following the talk joined together only to speak to each other, giving off a somewhat disconcerting and isolating energy. Overall the talk was intriguing, offering insights from a diversity of positions that greatly informed my own personal experience of the Contemporary Art Gallery’s current exhibition.

Blame It On The Rain runs until June 28th 2015. The next Feedback Series Event is on work by Tad Hozumi on Saturday, June 6th. Details here.