Arriving at VIVO at 10 o’clock, an initial excitement generated upon hearing the sounds of Vancouver’s Sarah Davachi and Richard Smith is quickly dispelled, as their set comes to an end almost immediately. Lesson learned: get to Quiet City on time – you’ll want to hear everything. The sizeable audience already present has not made the same mistake, enviably activated by Davachi / Smith. 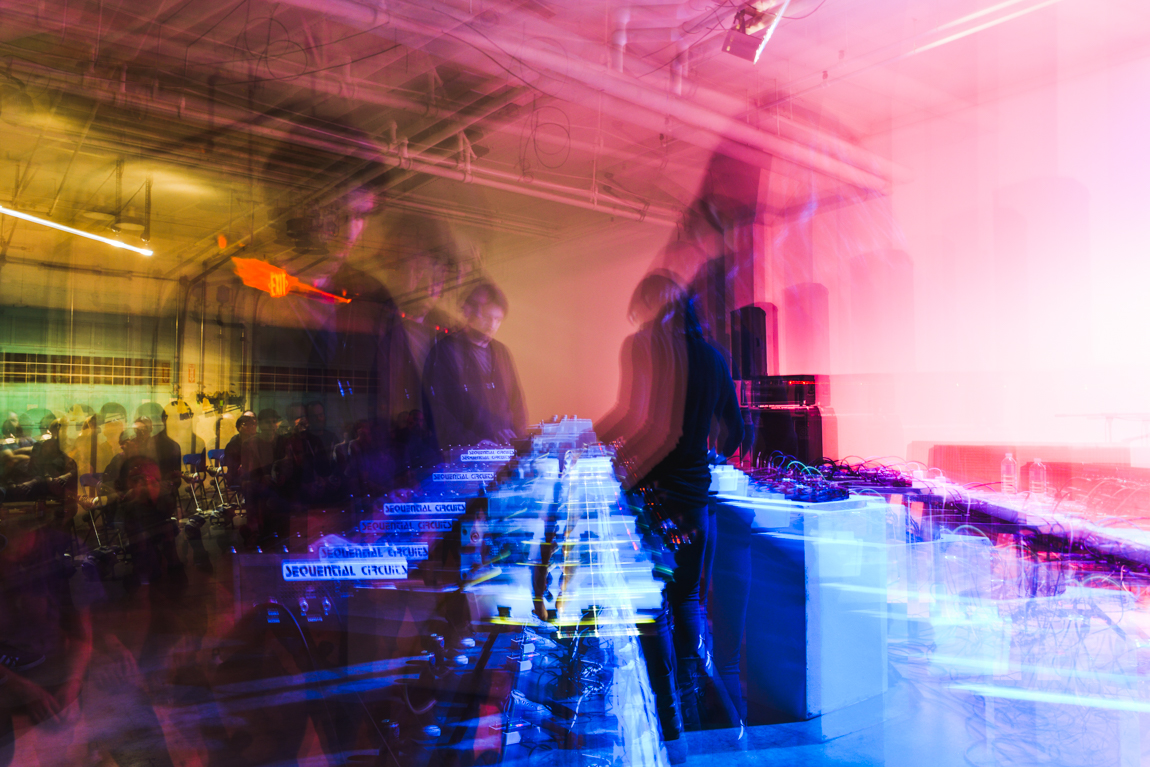 Between sets a friendly enthusiasm circuits the crowd of listeners, artists, program staff and volunteers. Voices grow quiet as the next performance begins and people return attentively to their seats and surrounding positions. In the transition the sounds of cracking beer cans and tips clattering against glass take on a hyper-presence, intermittently piercing through the rising stage sound.

Canadian Crys Cole and Australian Oren Ambarchi propel the evening, their collaboration deftly mixing a range of electronic and incidental sounds. Between them stands a Leslie speaker cabinet on a low riser, subtly highlighting its role in the soundscape. A spinning speaker horn at the top of the cabinet can be set to rotate at fast or slow speed, and throughout the performance Ambarchi applies fast tremolo to brief sections of his steady tones, accompanied by the “chnk” of the switched speed control. The tremolo lends an ethereal dimension to throws of long drones. Expansive sound consumes the crowd, and components in the building rattle gently in time overhead. 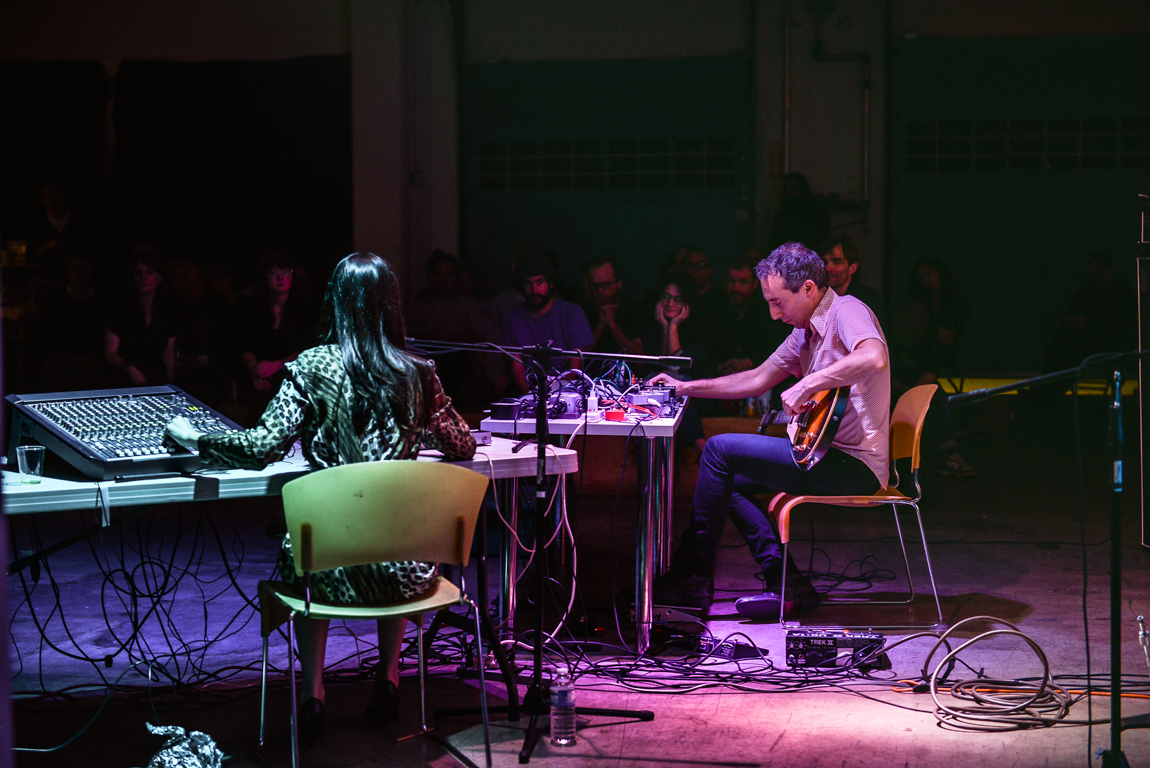 Though the duo’s electronic manipulations can be difficult to observe from the crowd, Cole produces object sounds that provide a visual tie to the sonic surrounds. In a close-mic’d area to the side of her primary instruments, Cole articulates a number of objects, each emitting smouldering micro-percussions. Brushes scrape and turn on surfaces, and a light silver foil slowly compressed and released shudders low frequencies into the mic. At other times Cole provides folded vocals, abstracted in the sound field: difficult to discern yet clearly in place. 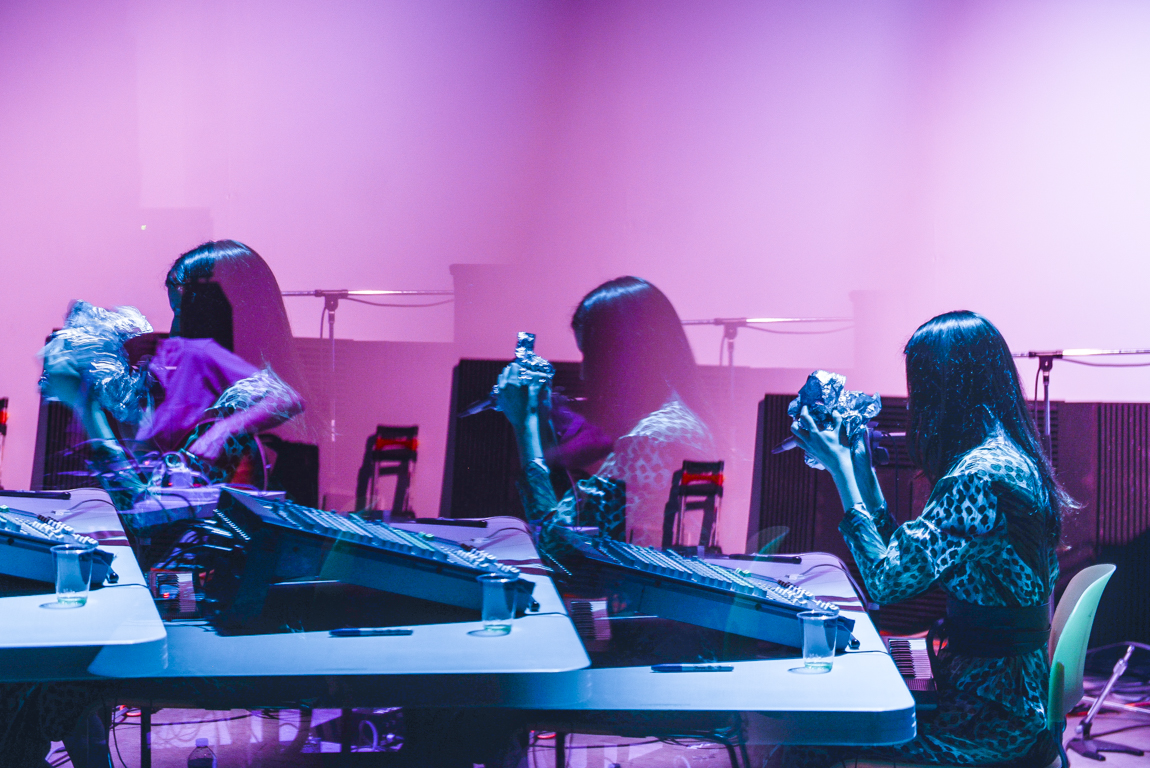 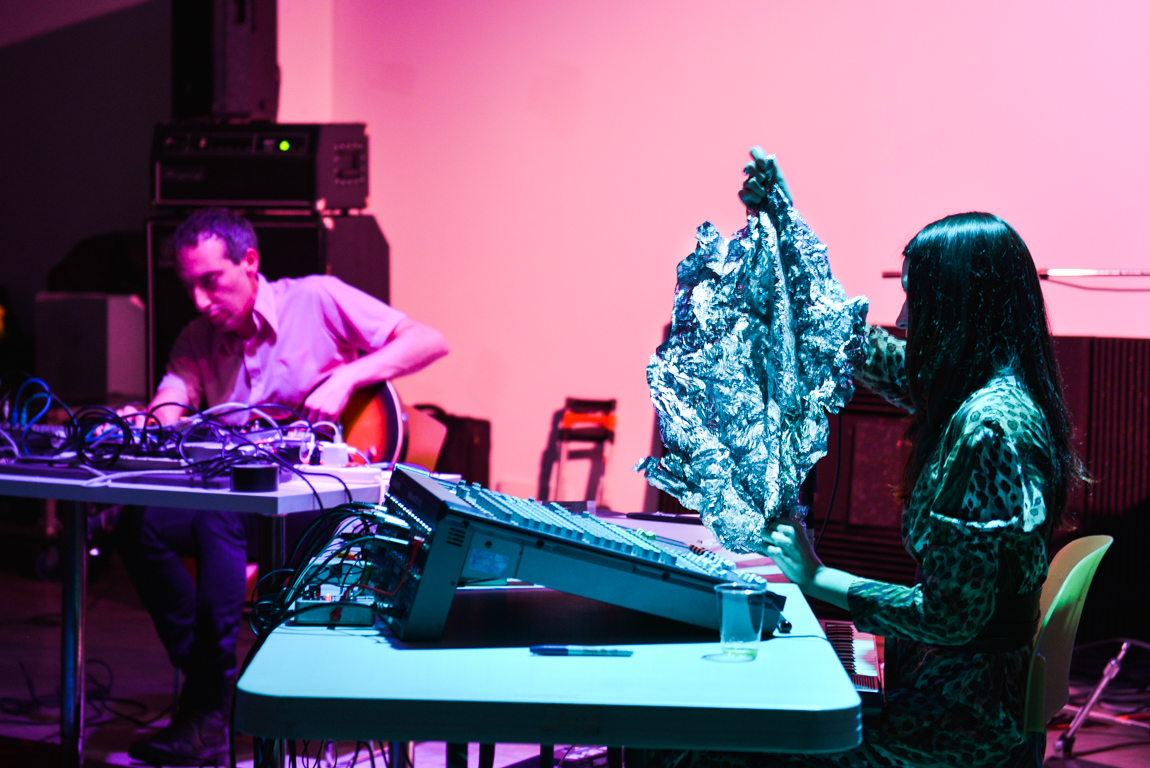 Ambarchi and Cole maintain a control and cohesion that hold the piece in a tensioned balance until its close. The performance reveals the potential expressions latent in small gestures, their amplified extension enabled by crafted sound.

Australia’s Lucas Abela, under his Granpa moniker, sets up the final main space performance. He stands close to the crowd in an ankle length tunic, his bare feet visible under the hem. A broken angle of glass is wired with a pickup, its signal running through a range of pedals and heavy amplification. Bent and heaving, Abela drives the glass with his mouth, his hands pressing the surface to affect the vibrations. The sounds are processed and blasted, and call like a violence of electric teeth, or some apocalyptic kazoo buzzing for further destruction. The sounds demand their own visuality, as they incite a survivalist unrest – an instinctual compulsion to keep watch on the source of the aural danger cues, lest something hit you in the face. This fleshy danger comes to a head at the end of the brief performance, as Abela stands and smashes the glass across his own face – scattering shards around his pink feet and drawing exclamations from those most thrilled.

As programmer Constantine Katsiris offers a final thank you to the artists, Panospria DJs take over the speakers for the remainder of the night. The animated audience carries on in and around the space, very few of them looking ready to leave. Presented by VIVO Media Arts, Soundscape and Panospria, Quiet City makes its case with ease, offering a range of evocative sonic material in an open, connective atmosphere. Keep an eye out for #18. 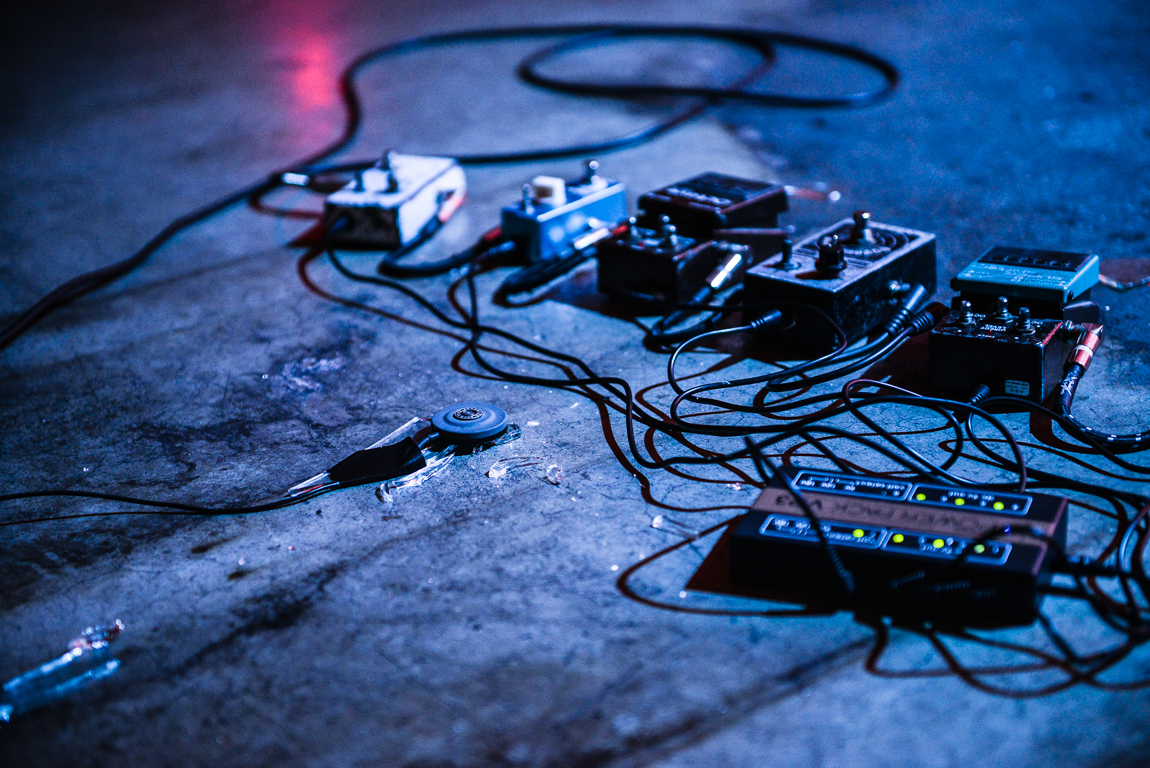 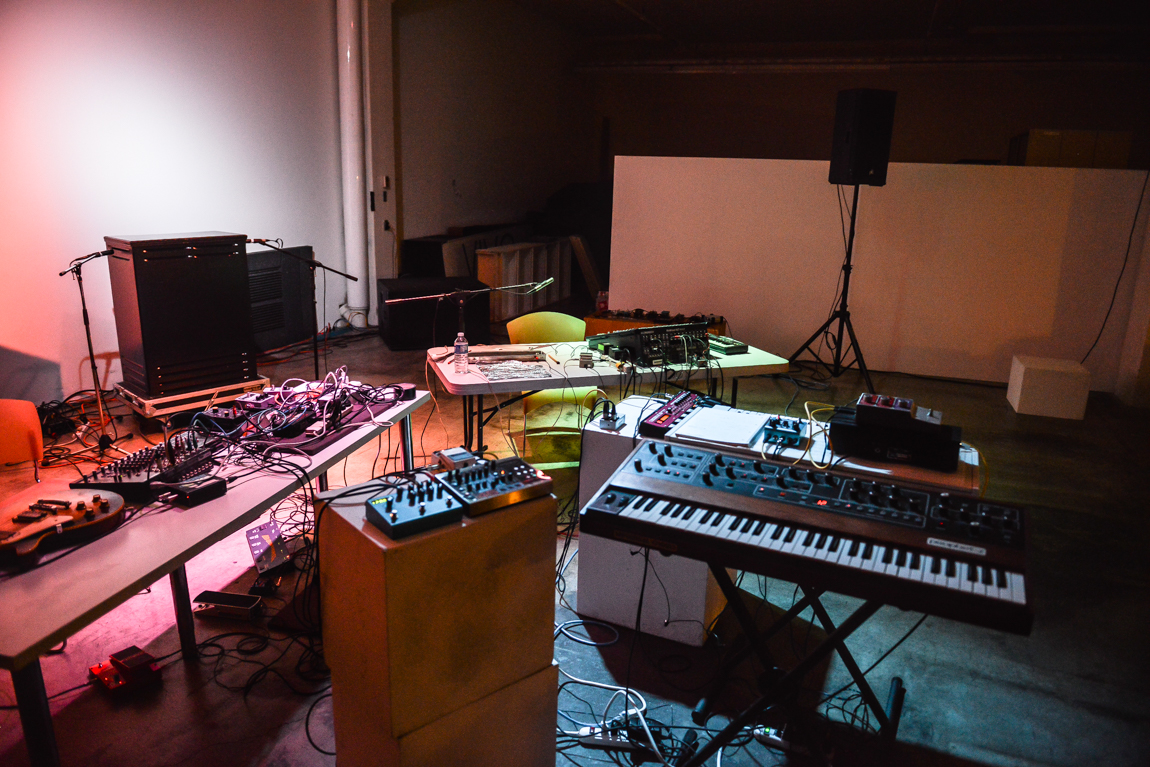 A Look Back: New Forms Fest 13

Art Bar at On Main Gallery