Finding a Place for Philosophy

Am Johal at the Vancouver Institute for Social Research

On March 2nd, the first of the Vancouver Institute for Social Research Spring 2015 lectures took place at the Or Gallery. This fourth series of VISR, which aims “to move beyond the borders of the traditional university and to open up a more accessible platform in the city for the engaged discussion of critical theory,” centers around the theme of sovereignty—an appropriate subject in light of the numerous proposals for pipeline expansion throughout the country as of late, as well as the opposition to these developments.

Close to home, the Unist’ot’en and Madii Lii camps in northern British Columbia are examples of resistance movements that are operating outside the sphere of liberal politics. In staunch opposition to pipeline expansion, they opt for direct action tactics over compromise and sanctioned debates. And recently, occupying a more prominent position in the mainstream, the protests on Burnaby Mountain revealed a general confusion over land-based struggles. Many protesters vacillated between appealing to the notion that, on one hand, Burnaby residents have the right of agency over the “public” space of Burnaby Park, and, on the other, that we are occupying unceded Coast Salish Territory—the first claim effectively pushing aside the second.

The question of “who decides”, explored at this season’s VISR series, brings up the overdue need to interrogate Eurocentric understandings of ecology, as well as the need to begin formulating new models of sovereignty that might lie outside of the state form. 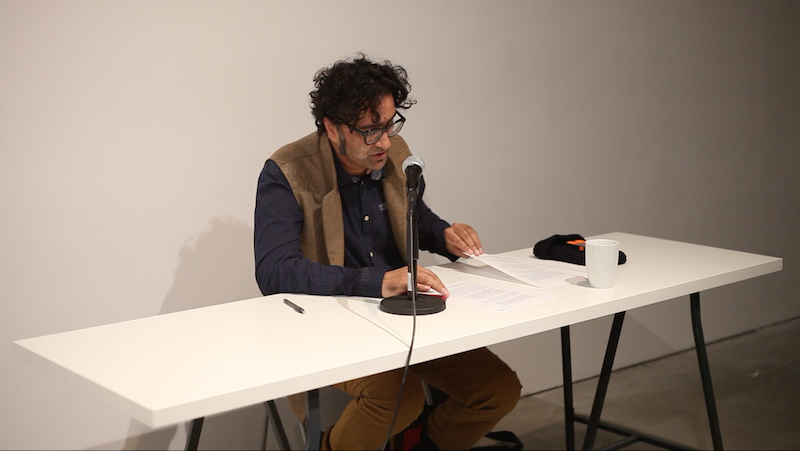 Am Johal at the Vancouver Institute for Social Research, March 2015. Photo by Alex Ross.

Am Johal opened the VISR series with “The Nomos of the Anthropocene.” Johal, Director of the Vancity Office of Community Engagement at the SFU Woodward’s Cultural Unit, has been completing a PhD in Communication and Media Philosophy at the European Graduate School in Switzerland, applying Alain Badiou’s philosophical work to Ecology, though at Monday night’s lecture he focused primarily on the work of Carl Schmitt and Benjamin Bratton.

Johal surveyed land claims demarcated by the division of land and water, implemented through colonial and imperial expansion. Because the New World’s Indigenous inhabitants were perceived as non-people, and the land was therefore viewed as “leaderless” and “unowned,” it was considered free for the taking. This “accumulation through dispossession” allowed for the introduction of European models of sovereignty. Though the blatant violence of this dispossession and displacement may seem to be in contrast to present day liberal politics, Schmitt contends that all political authority is grounded in violence, though liberal democracies mask this violence in a depoliticized discourse. Environmental issues and struggles over land-claims uncover it, however, and expose the contingency of sovereignty that is imposed through force.

Johal discussed the new terrains of geopolitical struggle that are opening up through developments such as drone warfare and the possibility of geoengineering, which lead to questions of “who decides” in regards to “the air, the weather, and the cosmos of outer space.” This question is further complicated by planetary scale computation, as Bratton hypothesizes that a “nomos of the cloud” has the capacity to resist the sovereignty of the state, and lead to a geopolitical shift—the redesigning of sovereignty in a “Post-Anthropocene” era.

The discussion period following Johal’s presentation elicited conversation about the role that philosophy may play in issues of ecology and environmental degradation. Johal claimed that while change has traditionally  been promoted on the level of the individual, it has yet to rise to the level of the state, a “scaling up” which philosophy may provide the impetus for. Yet the reluctance of one or two attendees to accept this assertion might indicate a disillusionment with serious philosophical engagements, a skepticism of its relevance to current global issues. One audience member also pointed out the Eurocentric basis that often underlies these conversations, and the possibility of seeking alternatives that aren’t grounded in European philosophical traditions—a recommendation which Johal readily acknowledged.

What the opening night of VISR showed is that these conversations deserve more time than was available at the event. The role that philosophy might play in current ecological issues and the contributions it can make in reconceptualizing sovereignty are discussions that are likely be continued at future VISR lectures.

VISR talks will be taking place every Monday until the end of April.

#KMFACE at No Way Cabaret