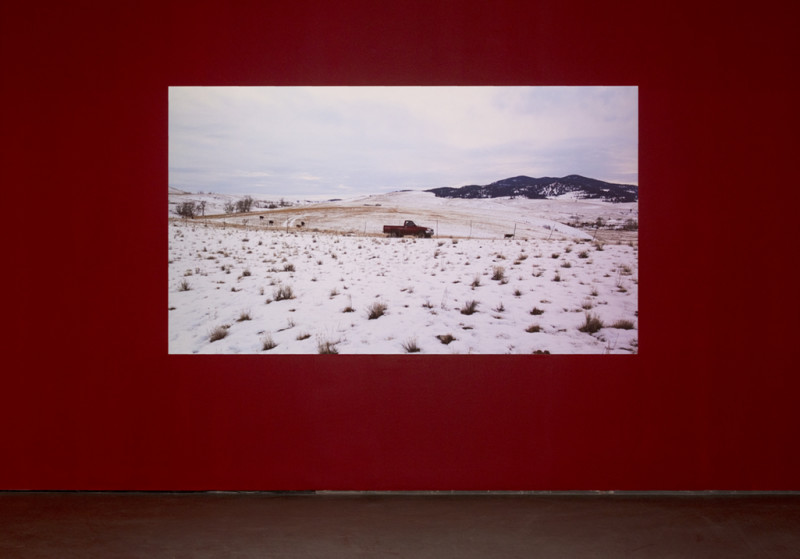 Parallax occurs when an object appears to differ when viewed from various positions. A common example is the changing appearance of a celestial body when viewed from different points on the earth’s surface. Or, the flattening of a three-dimensional space into the two-dimensional plane of a photograph. Extended further, a parallax of perspective is inevitable in the way people experience events, as a situation is bound to be recalled differently depending on who is doing the retelling. Parallax signals that there is never only one truth. All is relative to positioning, subject to interpretation.

Cultural parallax is the topic of Motion and Moment Always, Krista Belle Stewart’s current exhibition at the Contemporary Art Gallery, and the culmination of the New Visions Artist Residency undertaken at the Nisga’a Museum.

The Nisga’a Museum is home to hundreds of Nisga’a cultural objects and artworks that were recently returned to the Nass Valley with the signing of the Nisga’a Treaty, after having made their way across the country, largely by way of Christian missionaries. The original meanings behind many of the pieces have been lost with the changing of hands, and as a result, their stories are continually coming together through oral explanations offered by elders in the community. 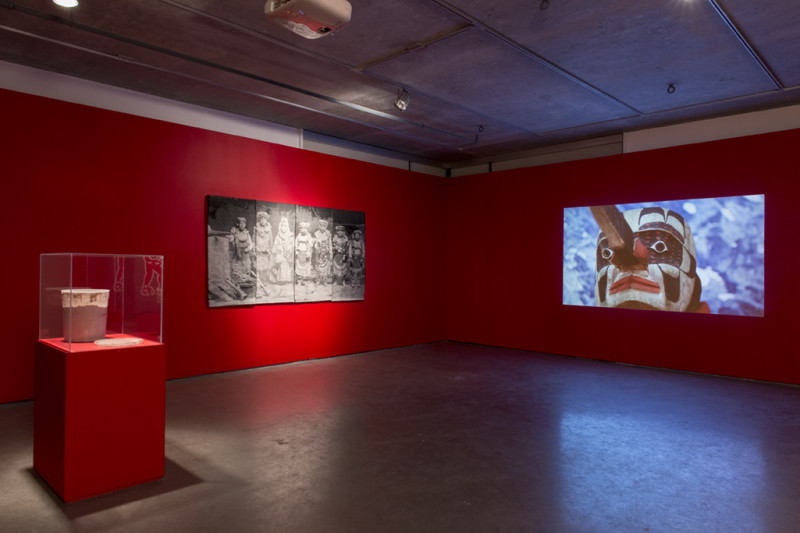 Motion and Moment Always is a selection of Stewart’s works alongside pieces on loan from the museum. The viewer is left to consider the different meanings and connotations  attached to these objects depending on the time and place in which they are situated. In particular, the objects from the museum have undergone several revisions in signification, attesting to the cultural parallax that occurs with each transition from one context to another. Appropriated by European settlers, they represent the conquest of a civilization seen as lesser; housed in museums across the country, they attempt to relegate the Nisga’a to the past; later returned and placed in the Nass Valley, they mark a cultural reclamation; and finally, found at the CAG in Stewart’s exhibition, they are exposed for the palimpsests that they are. 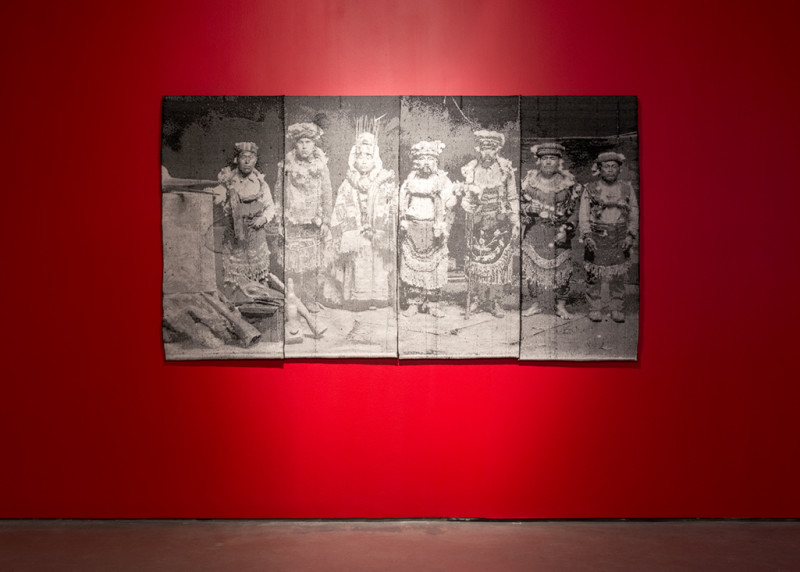 Upon first entering, the viewer is confronted with a photograph of eight individuals equipped in traditional Nisga’a regalia. Little is known of the story behind the image, beyond the fact that it was made by the photographer Benjamin Haldane of the Tsimshian Nation. Framed squarely in front of the lens, the group stands side-by-side, rigid and resolute, staring into the camera with the seriousness of self-preservation, their appearance representative of Nisga’a by virtue of the photographic act.

Like to the figures in the photograph, the pieces in the exhibition do not interact with one another. The layout is dissonant. Other works include a weaving by Stewart’s mother, jutting out perpendicular from the wall; a blanket on loan from the museum; and a bucket containing dirt from Stewart’s family’s land on the Douglas Lake reservation—an interesting heirloom, but rendered lifeless behind gallery display glass.

In a video by Stewart, images of First Nations women are juxtaposed with footage from the Nisga’a Museum’s interior. Through this apposing of the present with the past, Stewart seems to say that Nisga’a culture is still alive and evolving, not static and obsolete, but the pairing of the museum footage with the contemporary landscape seems too obvious.

The most interesting of the works is arguably a weaving on loan from the museum, a reproduction of the aforestated photograph. Curiously, the figure on the far left of the group has been cropped out of the image, and the viewer is left with no indication as to why. Was it for aesthetic purposes, to balance the composition of the image? Was it because, unlike the others in the photograph, the man on the left was not dressed in full traditional garb, his Western pants not ‘native’ enough? Was he, for some other reason, not deemed to be visually representative of Nisga’a? 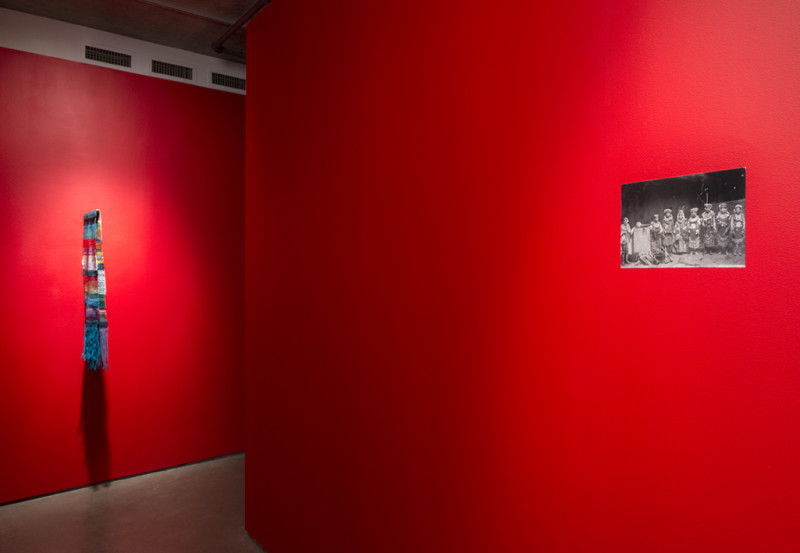 Just as the original meanings of the works are uncertain, so too are Stewart’s intentions. Like the repatriated objects, the exhibition invites the viewer to scrutinize how signification is assigned, but Stewart could have contributed more. Borrowed from the museum and placed in the gallery, little new is added to the works’ lineages of meaning.

For a place to be ‘unsettled’ implies that no one has yet made it their home. Colonial settlers, in fabricating a narrative of pioneering, framed their arrival as a feat of discovering and taming an untamed land. Yet such a chronicle incorrectly insinuates that there were not already complex societies in place. The objects from the Nisga’a Museum protest this erasure, attesting to the indisputable presence of a society that was here long before invasion.

But to be unsettled also implies being unresolved and undetermined. The exhibition catalogue informs the viewer that Stewart intended to interrogate the subjectivity and representations of First Nations, both in the past and in contemporary society, yet it is not clear what she is bringing to the conversation that is new, that has not already been seen. While the exhibition underlines the malleability of meaning and raises for discussion the indeterminacy of the Nisga’a material cultural history, it fails to provide any answers, or to pose any new questions.

Motion and Moment Always runs until February 15. More information can be found on the CAG website.