“After all, we’re Chinese”

Made in China - mystical humility: a story of home and history

Made in China, performed at the Firehall Arts Centre February 18th-21st, begins with introductions and house lights. The relationship is informal, and puts me at ease. To learn about performers in this way feels natural rather than voyeuristic, which is how I often feel when researching artists’ backgrounds before I watch them perform.

Sammy Chien, Qiu Xia He, Wen Wei Wang, and Gao Yanjinzi, of Beijing Modern Dance Company, begin a casual dance with unison hand movements. They laugh and speak of how they have to do unison movements because “after all, we are Chinese.” They invite the viewer to dance these hand gestures with them, creating a communal atmosphere that breaks the seriousness that comes with being in a traditional theatre space. This lightness gives way to humorous banter about the relationship between regions of China. They are a witty bunch, a family joined together by a common home and the stage. It’s a funny and physical performance from the get go.

The performers follow their introductions by giving personal histories. The story that stays with me is that of Yanjinzi. Sammy translates from Mandarin — her work with the Beijing Dance Company is deeply influenced by place; the countryside of Southeast China. It is a mystical environment, where longstanding textless philosophies are rich and people continue to live ‘primordial lifestyles’. She speaks of coming from a long lineage of dancers, and remarks that she started dancing in the womb.

Wang’s story of seeing his first ballet and coming home to experiment with his mother’s scarf marks the evening’s shift toward a metaphoric display of place, history and meaning. Wang moves softly and elegantly under white tulle. His limbs extend into the soft encasement that holds him.

Yanjinzi begins to dance. She is earthlike: her body imprinting the space with sharpness, severity, a soft and round fullness. As she reclines, her body assumes birth-like postures which project larger than life shapes upon the backdrop. Her movements are cartoony, gestural scripts. The movement traces land, expanding over large distances, and becoming full like the sun. As her body moves, the projection mimics on the backdrop like Chinese characters being writ large. It is simultaneously earnest and extravagant. She is as water, ephemeral and changeable at an instant. The images move, morph and disappear behind her like a Zen water painting. 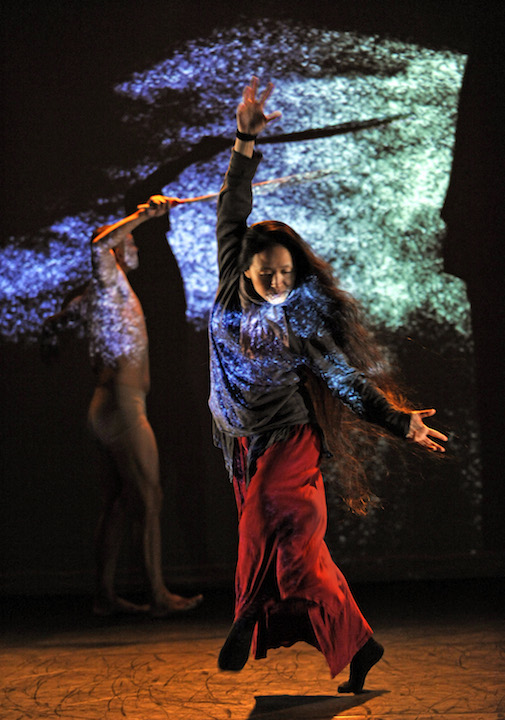 Wang dances, his movement possessing a weightless quality. He uses chopsticks like diviners, directing himself towards these tools with sharp decisiveness. He punctuates the space with the sharp end of the chopstick. These lines carry through his body, and as the connections become stronger, the colors on the screen become more vibrant. As Yanjinzi re-enters the space, he repeats, “I’m always hungry” until it becomes muddied by the effort. (From further research after the performance, I discover he is speaking from his experience living through communism off small amounts of rice.)

The shadowy lines of trees mark the floor, and the two dancers decelerate together. Wang holds a singing bowl, places the wand in his mouth and slowly descends to the ground. Yanjinzi sits on his back, and a journey across the stage begins. Like a slow animal carrying cargo; Yanjinzi faces backwards and lets her body wave in response to his shifts. I am reminded of Yanjinzi’s introduction of her primordial home. The sound supporting this action is a soft guttural choral wash, with moving streaks of red projected on the screen. This is a struggle. It’s a journey out of some state. It is a powerful and politically charged image, suggesting power dynamics, transformation of roles and instinctual travel.

Yanjinzi revisits her cartoony movement, a fan protruding from her mouth. Wang joins her for an urgent duet. They circle the space, a flurry of bird-like flamboyancy, with a touch of poise and modesty. They are sharp and elusive movers. It is beautiful and fluid. The hand gestures return, and are paired with projections of line drawings of floating hands in positions that look like ancient mudras. These populate the backdrop, becoming increasingly jumbled. 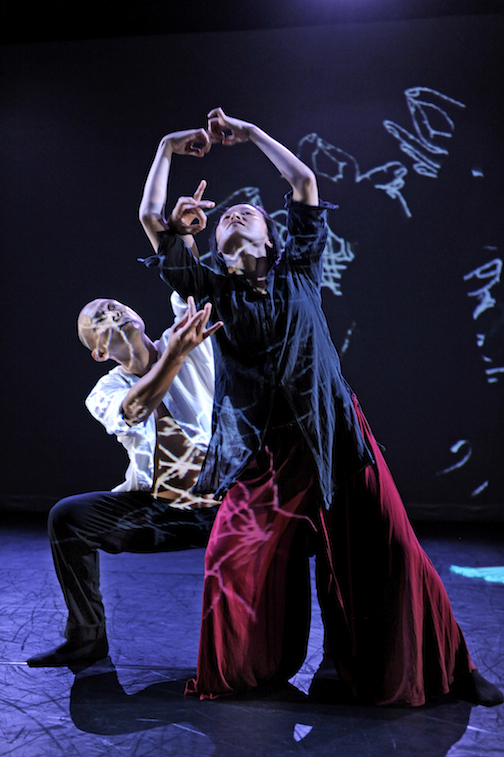 Chien stands as though drawn up from his sitting position by some unseen force, although the force is Yanjinzi. He moves towards her with urgency and hesitation. She pokes him and directs him. There is complicity in their exchange. As Sammy moves, his right hand continues to lead the images and soundscape; it is true performative multi-tasking. There is a cumulative intensity here; this unexpected action feels rebellious. Chien is rebelling while at the same time being severely guided by a sort of master. Yanjinzi continues directing, even while Chien moves against his role, his appointed place. This is one of the strongest moments of the piece.

The images of hands and mudras disperse into a million fragments of light. It’s a slow motion explosion. We are bombarded by sound as clear images emerge from what has been an exclusively graphic backdrop thus far. These new images are historic and political. They emerge softly out of the veil of colour, becoming more and more clear and vibrant as they progress. A spinning wheel concludes the flurry; a mathematical, calculating wheel.

Yanjinzi unravels her long hair out of an unassuming low bun. It cascades down to her thighs. She swings it sensually, harkening back to the mother images from the beginning of the piece. A constellation of bubbles that had emerged out of the wheel of light begin to dissolve into a sand like wash. Wang reenters, wearing nude shorts and carrying what looks like a long feather sword. Wang and Yanjinzi shake together, echoing a song with voice and drum. The rolling black lines that make layers of mountains upon the back wall flip and face each other, becoming vertical. Wang enters the yellow brown space of a drum that sits on the floor. Light projects through the drum, resembling a sun or moon. Yanjinzi revisits the beginning image: mother, womb, land. She thwarts the moon in size. To me, the image represents the reacquaintance with from whence these performers come. 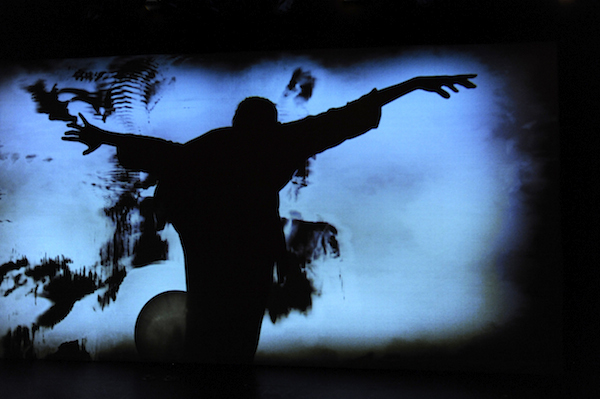 I was drawn into this world created on stage, an aesthetic world unfamiliar to me. While the style was relatively new to me, there were several performative measures that allowed me to relax and engage. These moments happened intermittently throughout the piece and acted as reset buttons. I didn’t have to have extensive prior knowledge to get a sense of the shared histories of the performers. It was a relief to be invited into the narrative, but not pandered to. These measures went from video projections of moving bodies and silhouettes, to ancient art references, to the incorporation of objects, to a sound and music score that felt so integrated with the dancing that I felt it as one. What I experienced was a mystical representation of four accomplished and individual artists expressing their shared relationships to their “motherland”, their home, and their history. The mystique and beauty was mixed with humble humor, and this made it free of pomp. What a delight it is to witness a collaboration that honors individual practice, shared memory and divergent manifestations of these histories upon the body.