Eschatons: The Touch and the Touched, November 14, 2014 at Dynamo 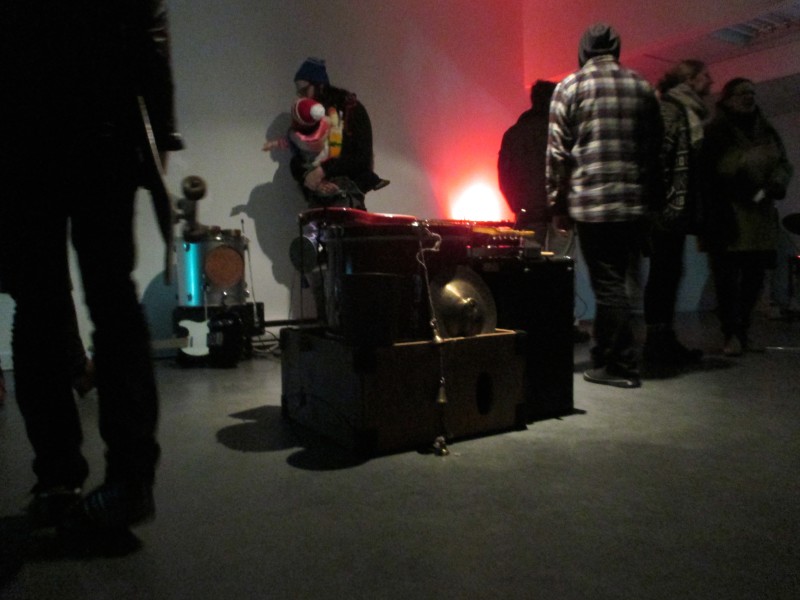 Crowd moving from site to site.

The invite for this show promised to be the “final event in the devine [sic] plan: the end of the world.” Doomsday has been prophesied to occur in many ways, both natural and supernatural. Tales abound of Antichrists, saviours’ second-comings, elemental disasters, comet collisions, etc. Cult and religious rituals are in place to usher followers into the next divine state of being. Reactions amongst believers, such as group suicide and survivalist stockpiling of food for the rapture, are documented cases of devotion to such tales.  Eschaton relates to end-of-time studies (eschatology) and the activation of it suggests apocalypse — bringing heaven to earth and transcendence from the chaos of this world. Quite a lot to live up to…

At the event: overhead lights are off and coloured bulbs, dispersed onto white walls, shift from blushing red to aquamarine. Sounds — buzzing through configurations of instruments and amps — are repetitive, unmelodic and visceral. Reminders of internal bodily rhythms. Shrine-like, the arrangements effectively abandon the guise of the concert. Unsensational and subtle, stage lighting is utilized, without other signals of a rock show (unguarded instruments, performers are not on stage, no banter in between songs). Stuck in the in-betweenness of a limbo in which the guitarist takes a moment to put guitar near the amp to experiment, to go off track for a moment. Are these arrangements tiny shrines or messy collections of rubble left after some great explosion? Are we scavengers or worshipers at these sites? 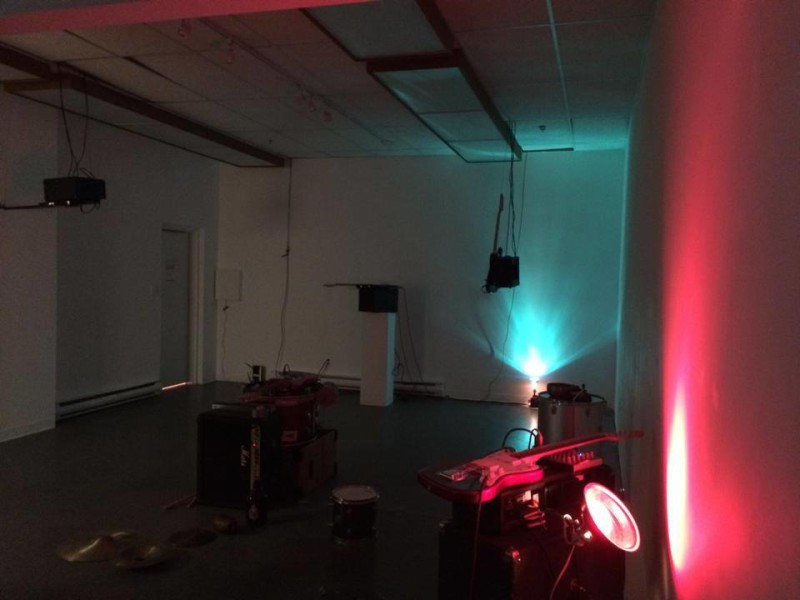 Lights stain the walls at Dynamo. Photo provided by the artists.

There is no buildup, no crescendo — like mediocre sex that just kind of keeps going, no orgasm in sight. It’s sort of nice to be there but one wonders if anything else is going to happen. Loosely reminded of Fiona Abtan’s composition for Janet Cardiff’s “The Killing Machine“, I couldn’t help longing to be Lost in the Memory Palace instead. Or perhaps, due to the director’s current popularity, this was a stab at a Jodorowsky soundtrack? Vibrations are felt and narrative lyrics become unnecessary. A line from a Depeche Mode song comes to mind: “Words like violence/ Break the silence/Come crashing in”. There are no words, “violence”, chaos, or anything uncomfortable about this show. Sounds lap at our ears like a calm surf, never daring to crash over us to encompass or inspire.

Noise flows through the room. Everyone is quiet. Many have given in to the humming and lean or sit against the walls, staring off into space. It is like we are in a post-punk womb, the attitude and messages are gone but dissonance remains. Maybe this is the calm before the storm. Maybe we are about to be transformed through rebirth. 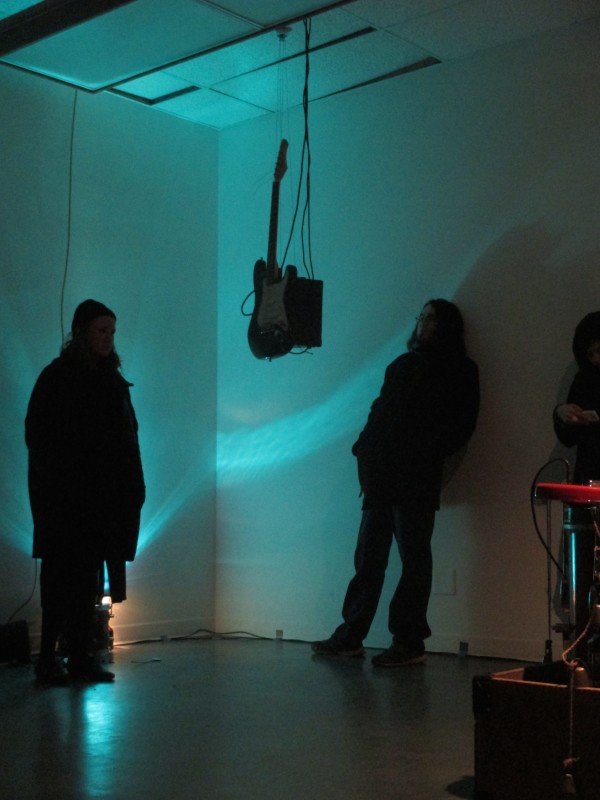 Still spectators stare into the void.

Have others come to this ceremony before us? Hundreds of zipper-pulls litter the surfaces of drum skins and spill out of a rusty metal bucket like a dingy horn of plenty. Perhaps markers of clothing worn by those who have crossed over already. Did they shed their garments like snakeskin to burn before passing through, leaving only the most durable parts behind? Have we already missed the space ship? 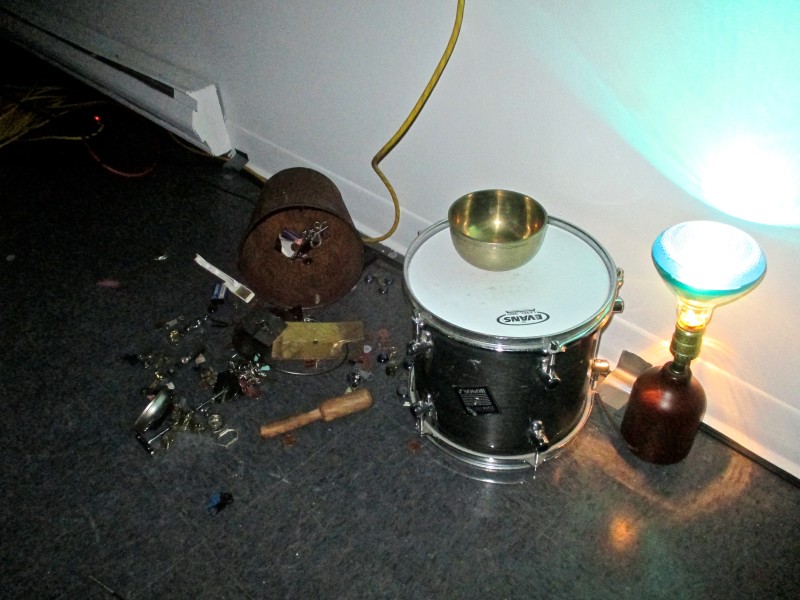 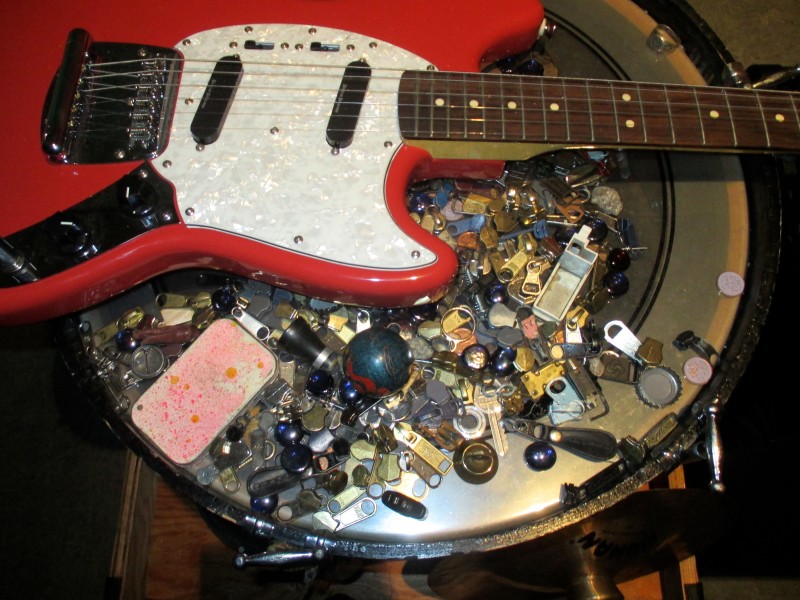 Zipper-pulls and other collected material.

Eschatons members (Jeremy Van Wyck, John Brennan, and Bill Batt) approach the sites after a while. Their shifts in soundscape are as subtle as an undetected heart murmur. Actions include: toying with a singing bowl, tapping a cymbal with a padded mallet, taking sips of beer, rattling bits of metal, and swinging a strand of heavy bells, reverently as a priest crossing a thurible down the aisle at midnight mass. They seem to avoid attention like roadies testing out equipment before a show — and we treat them this way, with indifference. A short pattern is made at each site. A series of touches or meditations. A pilgrimage for the fragile. A string of shivering noises, unpolluted by dogma. The razor of a screaming guitar dampened, dull tones moving through us. The sound of the ocean harnessed in a shell, echoing through the ear canal. Life moving through a void. 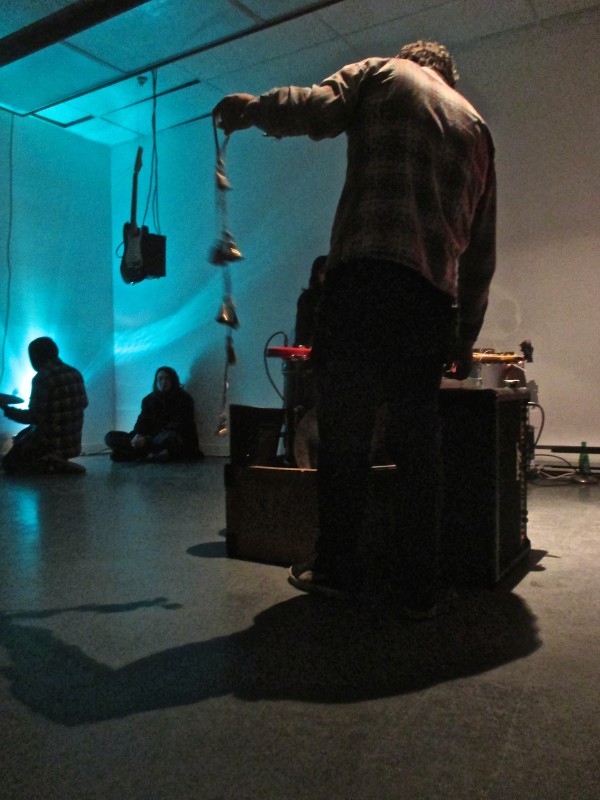 Ring the bells that still can ring.

Death has always defined life: bracketed by death we live for awhile. The performance seemed more passive death meditation than bomb-shelter-musical before the apocalypse. There is no talk of the end. No one welcomes you in and no one talks to you. There are no conversions or last rites offered. A human-made environment with provisional sounds that resonate with the body’s own heartbeats and subtle shifts: internal rather than external. And though we don’t speak, everyone is there together. We don’t want to go it alone. 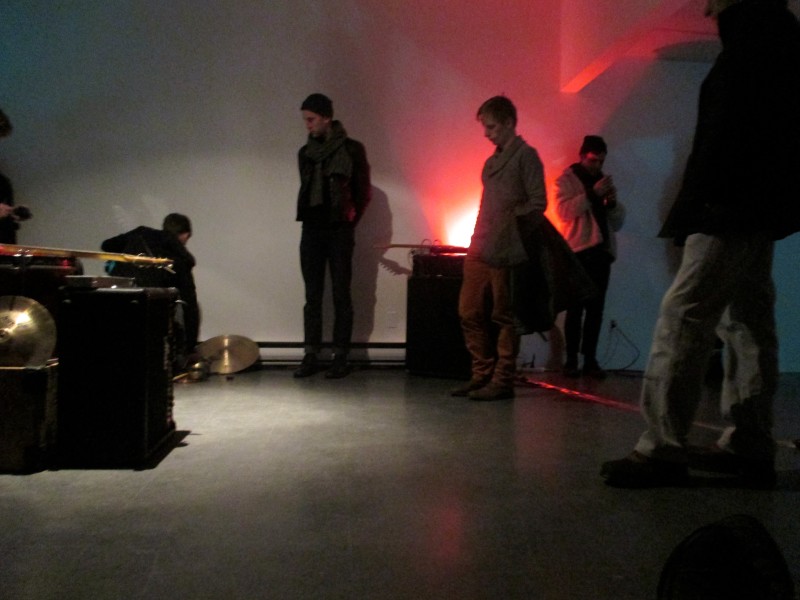 A performer kneels to play a singing bowl.

Letting go of expectations for this event to be grand is difficult. Steeped in the ceremony and intensity of religious ritual, I felt let down by the ‘chill’ environment. Marx, in his writings on religion, states that “[r]eligion is the general theory of this world” and “its logic in popular form” [full text]. Was this ritual, then, a reflection of isolation and indifference sometimes inherent of city life? Was my desire for more not just a thread continued from the every day? We pass from moment to moment, without effort…if we choose. Celebrations and events used to mark important moments should stand out. This event came across as gentle environmental entertainment, not a performance to immanentize the eschaton.

The simplicity and transcendental quality of the sound work may have been enough without tacking on such a grand concept. Meant to bolster the work, the description of it sets the viewer up with expectations so high, disappointment is inevitable.