The Colour of Silence

Written by Dillon Ramsey
All images courtesy the artist 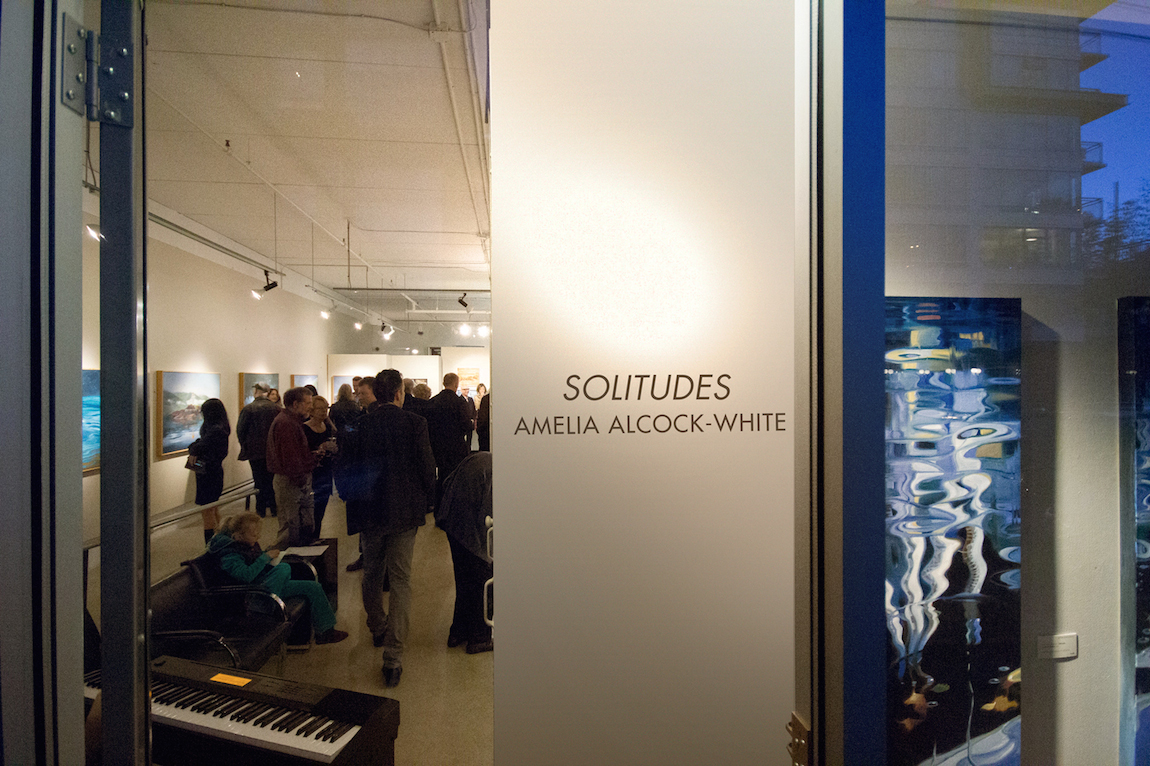 South Granville is always surging with a tide of shoppers. The sidewalk at Broadway is practically spilling over with passersby as I hurry north toward the Granville Street Bridge, and then, at West Sixth Avenue, I turn left. Suddenly I find myself steeped in a serene silence, and in the peace and quiet I arrive at last at Petley Jones Gallery, just a few minutes late for my appointment with Amelia Alcock-White. Her solo exhibition, “Solitudes”, graces the gallery walls, and the title couldn’t be more suitable; as I enter the tranquility of the space, the cool ambience, the wooden furnishings, and of course, the gorgeous, luxuriantly-coloured landscapes transport my mind from the crush of the city to the solace of the sea. The artist, looking lovely in charcoal-grey, welcomes me warmly. “Did you see the diptych in the front window?” she asks. I hadn’t. I was running around rapidly like everyone else, rushing here from my earlier errands without appreciating my surroundings. 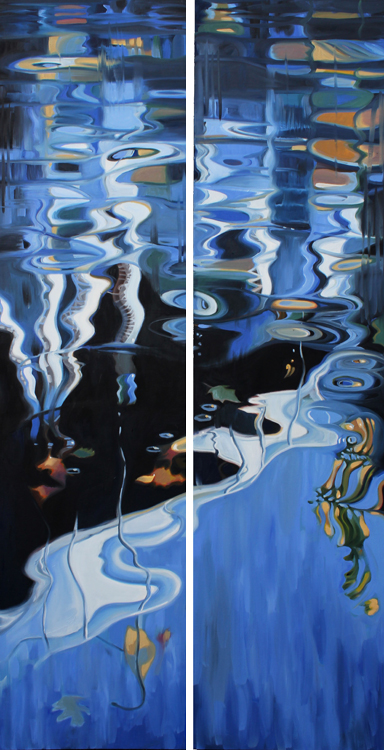 Under The Bridge by Amelia Alcock-White

And perhaps this is the point in “Solitudes”. Though a lot of people feel alone in today’s society, corresponding electronically even with their closest friends, the truth is that we’re constantly swimming in an ocean of phone calls, e-mails, text messages, and social commitments that leave little time for ourselves. Alcock-White’s newest series of paintings spirits its audience away from all that, if just for a moment; and when I’m standing before them I feel as though I can breathe more freely. The diptych she referred me to, Under the Bridge, is both understated and elaborate, detailed and abstracted, and just a brilliant use of paint; its rippling colours are continuous across a pair of elegant, elongated panels, and its dynamic fluidity beautifully conveys reflections, distorted yet articulated, upon the water’s surface. The sources of the reflections are absent here; all that remains are impressionistic images in blurring blues, whites, and golds, glinting and hinting at carefully representational forms, and yet functioning independently as radiant colour field canvases in their own right.

Portraying reflections is among Alcock-White’s specialties in her painting, and she is adept at recreating shimmering, aquatic light in her artworks. This has been a part of her painting practice for years, and “Solitudes” is her second series where waves and water are the show’s primary theme. “Sometimes in art, things just arrive as a surprise”, says Alcock-White of her deftness in defining the water’s texture, transparency, and refracted light. “It was an unconscious discovery. But in thinking about it, I realised that my body is water; and I grew up on Vancouver Island surrounded by it. It’s what I’m made up of, and with water I found a perfect combination of metaphors we can all relate to“. 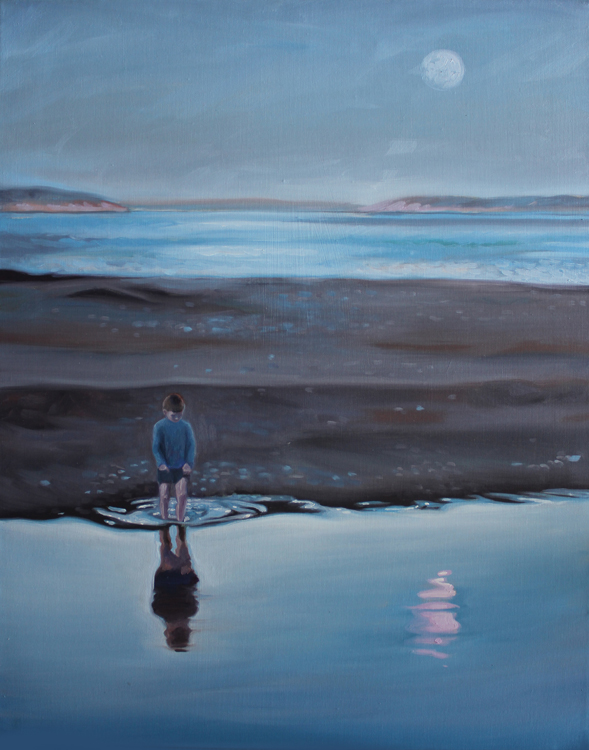 In “Solitudes”, the recurring theme of reflections is something of a double entendre. Not only do the paintings literally capture the way light and colour pool together on liquid surfaces, but “reflection” also connotes memory and meditation, something that seems to occur spontaneously when alone in nature’s calm. This is especially the case for Alcock-White, who spent her childhood swimming the pristine lakes and exploring the ancient forests of Vancouver Island, and for her this exhibition is full of profoundly personal touches. “The frames are over one hundred years old”, she points out as I admire Eventide, a soft, dusky work depicting a child wading knee-deep in twilit waters. “We dragged [the wood] from the lakebed and dried it, and my father used it to make the frames for the different pieces”. Alcock-White’s father, a woodworker and a craftsman by trade, confirmed the wood to be Douglas fir, which was over a century old before it was submerged. As such, the imagery of this show comes not only from Alcock-White’s own memories and moments of inspiration, on the wild coasts of Tofino and the craggy inlets of Haida Gwaii, but from an intergenerational collaboration with her family and landscape.

Alcock-White’s artistic method is far more ancient than her picture frames, and she specializes in what she calls “Old Master” techniques; after completing several studies of figures and landscapes, she paints a grisaille with a first layer of colour and shading, blending in raw umber and sienna which add an organic warmth to the finished product, before creating the actual painting over-top. And aside from the Studies in Charcoal and Gold, a series of gilded drawings with surprising dimension and depth, she only uses oil paint in “Solitudes”; once again, this goes with her “Old Master” method. “It’s just so luscious and viscous and it does look wet, even when it’s dry“, she explains enthusiastically; sure enough, the moistness of oil on canvas proves to be the perfect medium for “Solitudes”, and in pieces such as Breakwater and Threshold, Alcock-White has experimented with vertical streaks that subtly suggest cascades of vapourous precipitation, or turning tides. 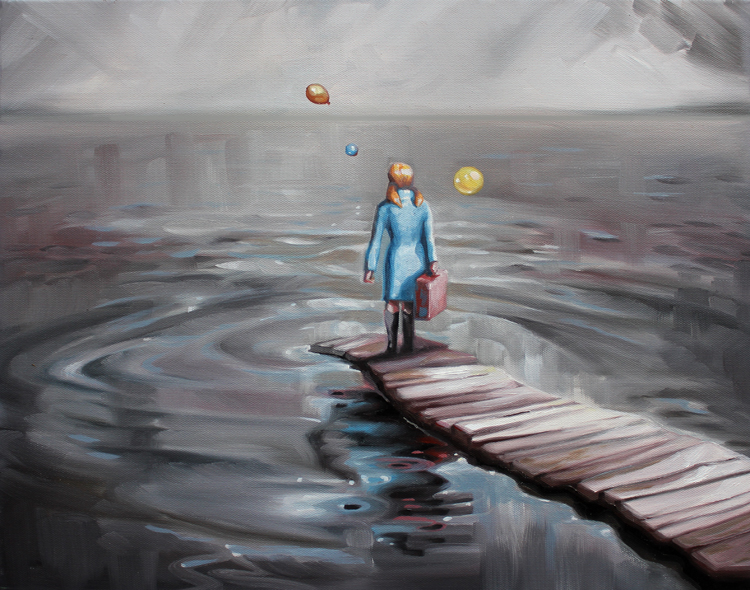 “Solitudes” was completed in a relatively short time-span, about a year and a half of consistent work, as Alcock-White wanted to allow a flow of concepts and ideas to be continuous throughout the images; this ultimately contributed to its remarkable, impressionistic aesthetic, as well as the clear undercurrents that thematically unite the works. “In each one, there’s a figure being drawn down to the water’s edge“, Alcock-White emphasizes. The figures themselves are not references to real people, though several of the paintings allude to real places. Alcock-White tells me the story behind Around Midnight, which is based on her travels in Tofino. On moonless nights, when the light of the stars is the only source of natural illumination, hundreds of animals bask in the shallows off the beach; when the water is disturbed by a human foot, bioluminescent microorganisms glow with a ghostly lustre, and shoals of sardines, minnows, flounders, and a host of otherworldly invertebrates scatter like phantoms from the intrusive, foreign steps. 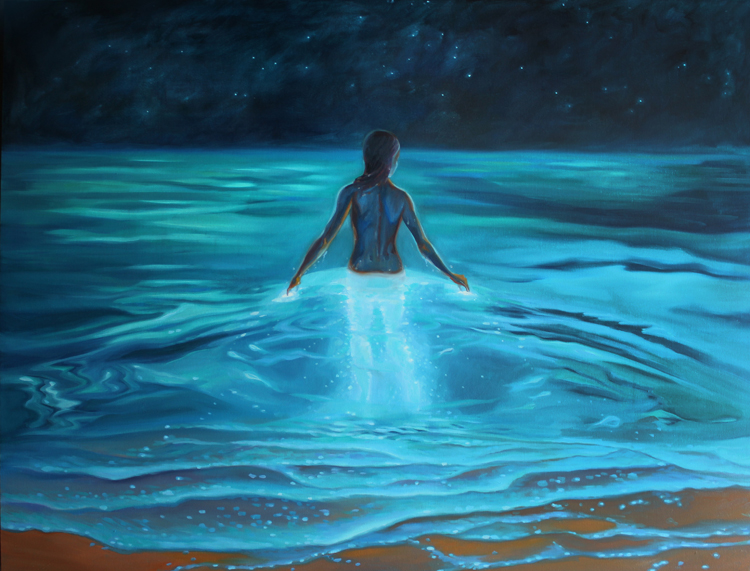 Around Midnight by Amelia Alcock-White

But on a more metaphorical, and maybe even metaphysical level, being drawn down to the water’s edge symbolizes an engagement with the subconscious mind. People tell fearful stories of the ocean depths, just as they are often afraid to delve deep within their own psyches and emotions; and yet once there, undiscovered doors can open onto unimaginable wonders. Alcock-White talks about the trope of the hero’s journey in mythology and psychology, and how the people in her paintings seem to stand on the precipice of a profound adventure which may take them beneath the water’s surface, and potentially beyond their own surface as well.

Paintings, according to the artist, are portals to a place of feeling; they stand apart from both photography and lived experience because of their uncanny ability to border upon the surreal. And indeed, there is a surrealist impulse, a pure psychic automatism, in Alcock-White’s work. “The actual process of laying down the paint becomes alchemical, and that’s when I let go; because it has an energy all by itself”, she says. “I don’t push the meaning so much; [the paintings] are enigmatic, both in how they are made and how they are interpreted”. “Solitudes” has an aura of mystery to its creator and spectators alike; whether this manifests as a memory, a hero’s journey, a dreamscape, or a connection to the natural world is determined subjectively, and is different for all. As Alcock-White advises, “Your imagination can just take off”. 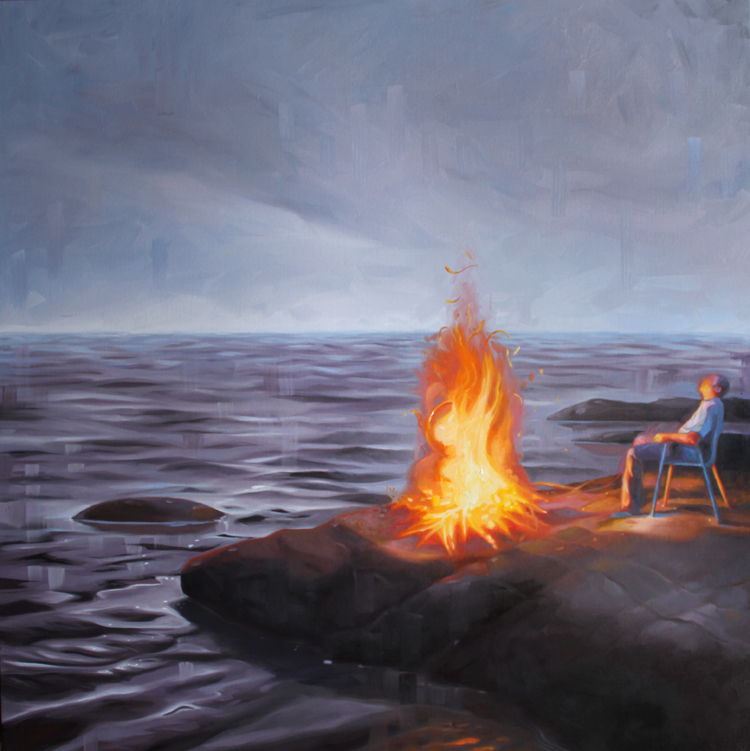 One Response to The Colour of Silence