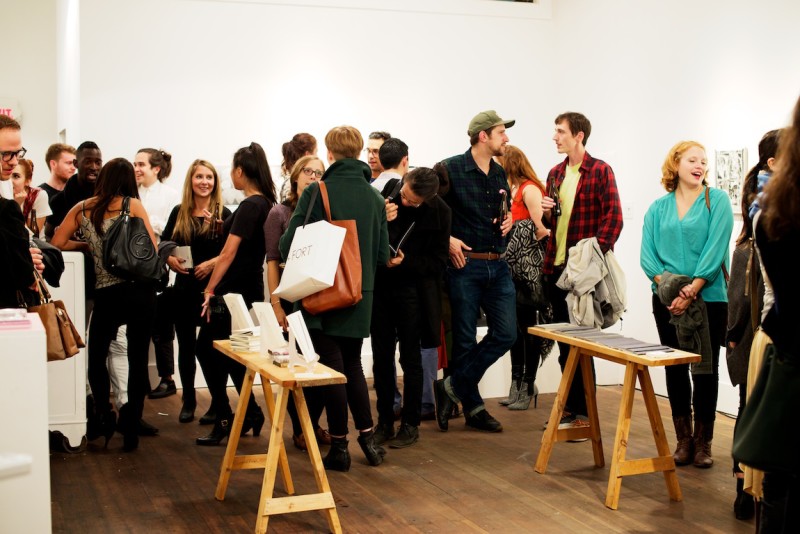 With the electric hum of busses behind, I enter Field Contemporary. Guests fill the cozy gallery and group together in monochromatic ensembles as if curated to match the artwork. People relax into revelations about desires for community and collaboration – a number of essays and books are recommended and introductions are made. The space becomes a conduit for speculation about what makes up an art community, especially if one is not part of a clique. There is excitement in the air – the kind brought on by the possibilities of a gathering.

Moniker Press and Ends creator Erica Wilk is standing near a narrow sawhorse upon which her zines are stacked (fresh off her risograph press!). The word ‘ends’ refers to an end-of-the-world dialogue as well as a collection of odds and ends two years in the making. And true to the post-apocalyptic theme, the zine is raw and anarchistic in its presentation: mixing found notes and transcriptions of conversations overheard with authored art works. There is a sense of longing in the work, in the negation of context and information. The sensual, labored-over, thick rag paper cover has been screen printed with a flat of deep warm slate grey then embossed with a raised pattern of dense sweeping lines. The work flirts with rawness while actually delivering something more precious: a poetic whisper, a narrative with many gaps that are left to fill in. The reader is reaching for knowledge, to be filled up with it, to consume it and this work disallows such clear consumption. Like the blanked out film screens on one page, an easy read is denied. A post-apocalyptic time capsule, the anonymous and known rest in one place – each somehow equalized by the monochromatic greys of the zine. Wilk’s previous work includes artist book Duality – an attractive piece combining full colour art prints and poetry from local artists. 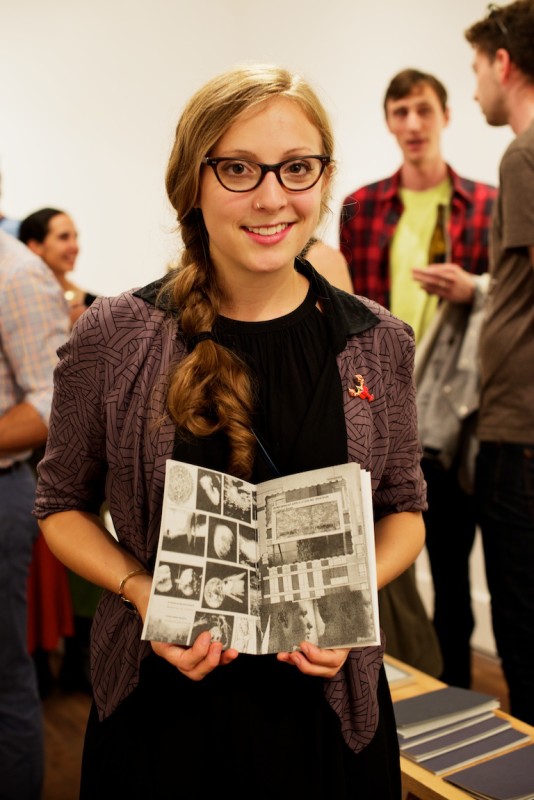 Erica Wilk with her zine Ends.

Wilk points to a parallel sawhorse five paces away: It holds Issue 1 from HWY Magazine, which she has printed and helped design. There is a smart tuck in the spine of the magazine, allowing for the inclusion of all 98 pages of articles and artist postcards. One of the articles is about the sculptures of Vanessa Brown (who is at that moment animated in conversation, a punctuation of colour in a 50s teal dress), inaugural artist exhibiting at Field. Co-creator and writer for HWY, Alex M.F. Quicho, says that the HWY project has been four years in the making – that everyone she wanted to work with is now ready, experience and motivated. The project consists of a website (quietly launched this summer) and quarterly magazine, the point of which are to create a space for sincere and personal expressions of many facets of culture in the city such as art, design, fashion and food. It seeks to be a cross-disciplinary catalyst and curatorial project.

HWY articles – both online and in print – are sincere, rich and expansive investigations of the art works they cover. Their writers understand the difference between criticize and critique. A refreshing break from snarky blog posts, of which there are no shortage. 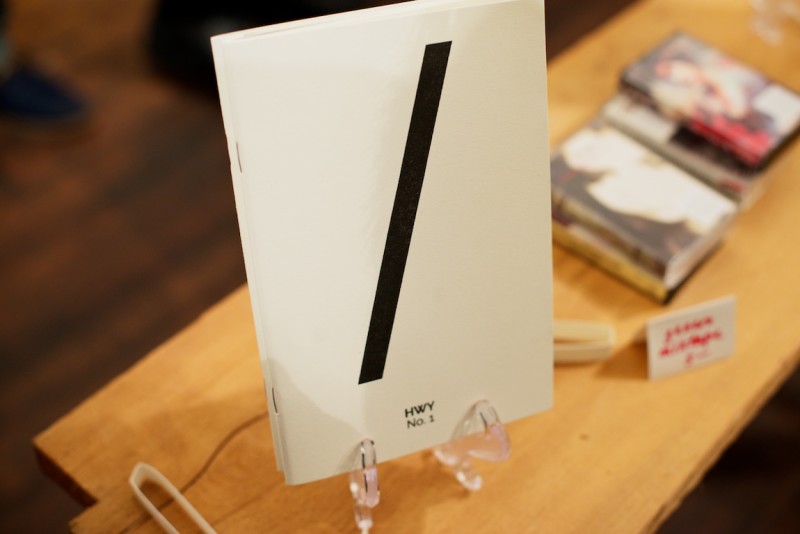 The front door of the gallery stands open, yet the heat of many bodies (heightened by some guests being in the throes of a cold going around) thickens the air. Relief at the suggestion of coolness, brought on by the dimming lights, as Soledad Muñoz, Chandra Melting Tallow and Aileen Bryant arrange themselves around their sound equipment. The audience, as a collective body, falls into quietude – a sonic shift created through a short musical performance.

The ethereal music softens the atmosphere and becomes a reprieve from the hectic excitement of the book fair. Each of the women takes a turn singing, their voices unique but interconnected. Each one rings out, echoes, lingers, gently manipulated… stretched out a little longer as if notes played on a piano with the sustain pedal pressed down. The performers wear white shoes and black pants – matching and yet each version of this ensemble different from the next – synchronized individuality.

It is the women’s first time playing together. And at the last minute, they change their song choices: Muñoz sings a Chilean song by Violeta Parra, Melting Tallow a song composed with her other band, and Bryant a Gallic lullaby. Muñoz is known for her experimental sound work and revels in the “liberation of structure”. She does not record her work and considers herself to be more a performance artist – moving through many performative mediums including skateboarding, weaving and music. She sees these movements as connected and similar: “with weaving there are patterns, textures, repetition. In my sound work, it is as if I am weaving – an intangible weaving.”

The performance occurs through Muñoz’s label Genero – a music initiative to promote female artists. Genero is a Spanish word with multiple meanings: textile, gender, genre, and to generate. She says of the multiplicity of Genero, “It is a social metaphor. There are all these threads coming together to create a whole. If one thread moves, the whole textile shakes. I like the possibilities that exist within that word.” The label’s logo – a square with strands going over and under each other – speaks to this woven-textile metaphor. 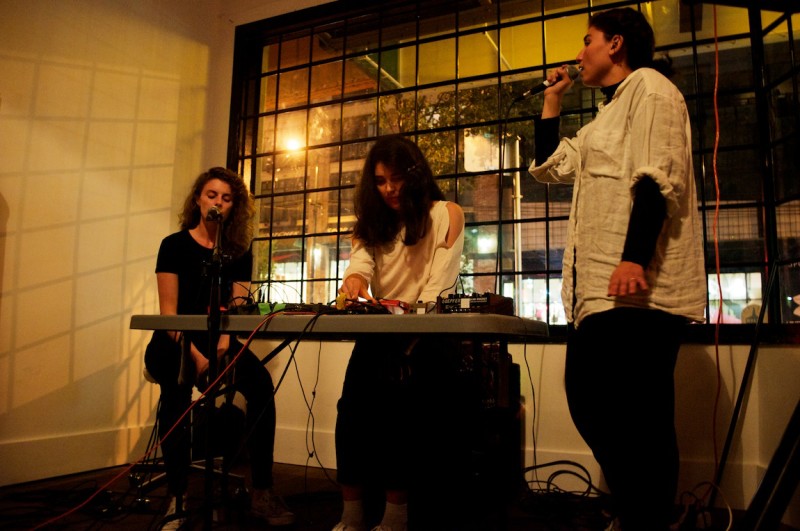 The launch occurs midway through an exhibition for the painting collages of Jason Deary. His works show the tools and signifiers of painting: paint, linen, brushstroke – the respected medium of paint is employed but then cut apart to create collages and piece together a conversation about painting. Deary employs a variety of painterly methods – from modernism, but post-modern in their multiplicity. More of a conversation with modernity from a post-modern perspective. Stylistic movements, seen throughout abstract art history, are used to compile a lexicon of patterns and an intersection of textures. Expressionistic but tight, on small canvases, the work suggests a looseness that is really controlled. The monochromatic quality of his paintings, Xerox-like, become black and white documentation of painterly codes. 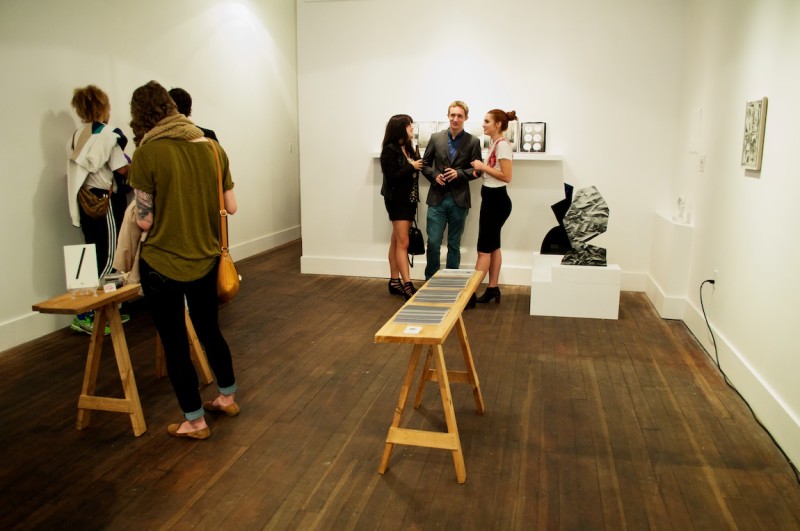 The launch of HWY Issue 1 and Moniker Press’ Ends occurred October 4th at Field Contemporary as part of the Vancouver Art/Book Fair.

Also happening the same day was The Monochrome Shop at UNIT/PITT, featuring a book launch and talk by Mark Cunningham. 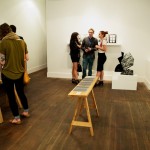 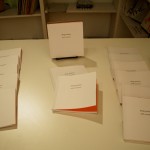 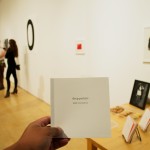 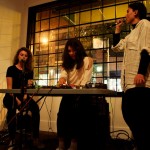 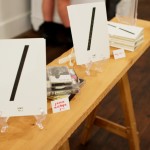 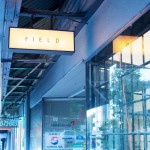 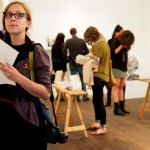 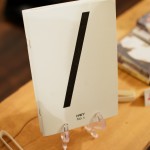 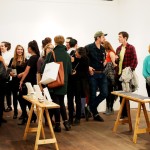 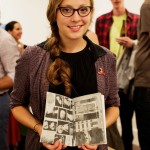 2 Responses to HWY Is. 1, Moniker Press, Genero at Field Contemporary

Sounds Under the Stars

Like Us. Vancouver Art Book Fair Delivers Much More